Oh, but I couldn't get the questions right

Saturday was my parents' wedding anniversary. Their 50th, and the sort of thing that in normal times would have had us ... well, not getting together for it. In non-pandemic times this would still have been an awkward weekend. But we would have planned to get together some convenient time --- maybe Thanksgiving weekend, perhaps around Christmas or New Year's --- for the whole family to gather around.

Instead, we did something novel for me and normal for everyone else: a group video chat. Through Google, because my brother in Massachusetts figured that involved the fewest complications. By this he meant I wouldn't have to download Zoom or anything. Fair enough. Hey, I remembered to take off the little Post-It Note that covers my laptop's camera lens so well that most of the time I forget I have a camera. I had seriously thought whether I'd have to do things from my new iPad, which I know has a camera that I don't use, instead.

It's the first time my parents have seen me since January, when stuff was looking basically normal. It's the first time my siblings have seen me since my aunt's funeral in 2018. I did not recognize my nephew, who I haven't seen since he was an infant and our little weekend trip to Holiday World in 2016. My nieces were a bit of a challenge too, although my Maryland brother's were manageable, especially when they were both on camera and I was sure which was the older.

Nobody muted their side when they weren't chatting, which subtly drove

bunny_hugger crazy. It was hard for the kids not to burst out with wanting to talk about themselves, which I can understand, but which doesn't make the adult conversation easier to follow. Also there were a couple times where two people in the same room had their phones or such open together, and we got echo effects. When my Mom scolded Dad to mute his phone I said to just let him play his green tambourine.

bunny_hugger did the incense-and-peppermints joke, which is maybe the better riff.

My sister, and my brother in Massachusetts, had to leave after about an hour (I said OK now we can talk about him, a well-received joke that was better because he was still connected, through his wife's phone, in another window). We went on another hour after that and made vague plans to do video chats again sometime. We'll see.

I think my video call technique turned out pretty good. Despite the windows behind me I wasn't horribly backlit, possibly because no light actually penetrates into our house and the dining room light was in front of me. I was more or less centered most of the call and even gracefully ducked to the side to show off some Halloween decorations. Nobody complained that I was any harder to hear than I always am. So, that wasn't too bad.

My parents mentioned how they largely eat through a meal kit delivery service these days. They've mentioned this several phone calls the last couple months. It's all right, good for them I guess, but it makes for a weird moment when chatting with my parents turns into a podcast.

Still would rather we have done a ``surprise'' gettogether for them over Christmas break.

Let's get back to luxuriating in the last day of ReplayFX, and the one day of the Women's International Pinball Tournament.

bunny_hugger was competing, of course. She asked me to not hang around, from the concern that she wasn't doing doing as well when I watched and tried to reassure her that she was not doomed and all that. 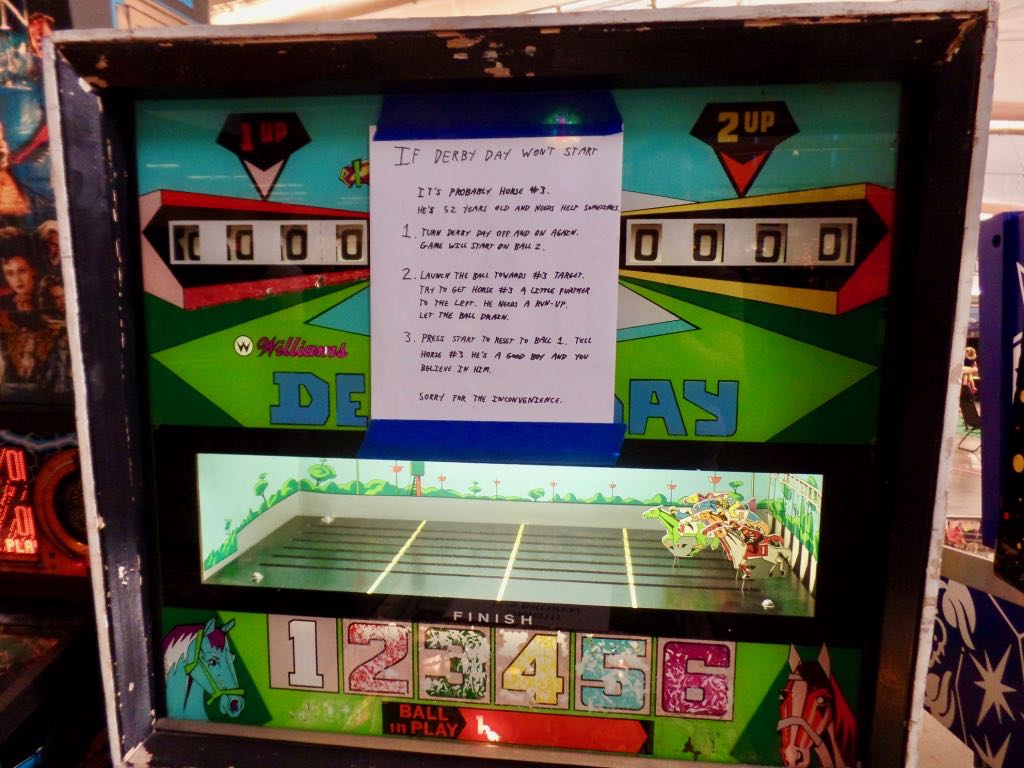 I have a social-media friend who's one of the techs at Pinburgh and he spent every spare moment running back to Derby Day, trying to get it working again. It's a wide-body pinball-ish construct with the twist that your target hits advance different horses. Horse 3 was just a recurring problem. 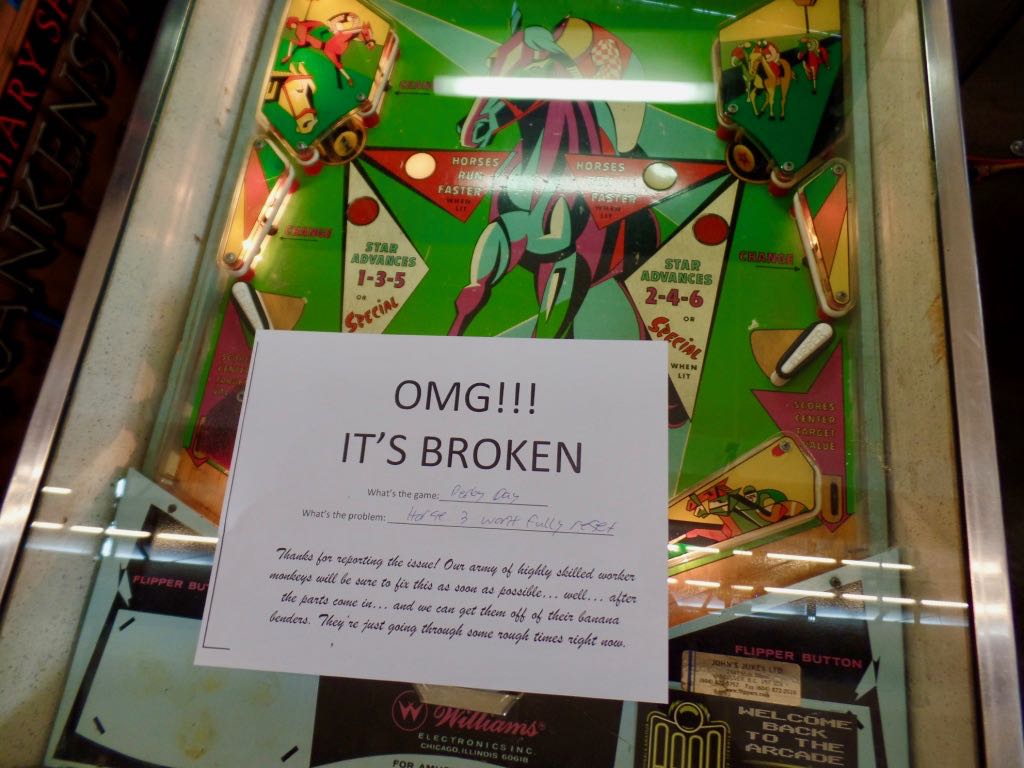 We would get a couple games in during the brief moments that Horse 3 was not being a problem, though this wasn't one of them. 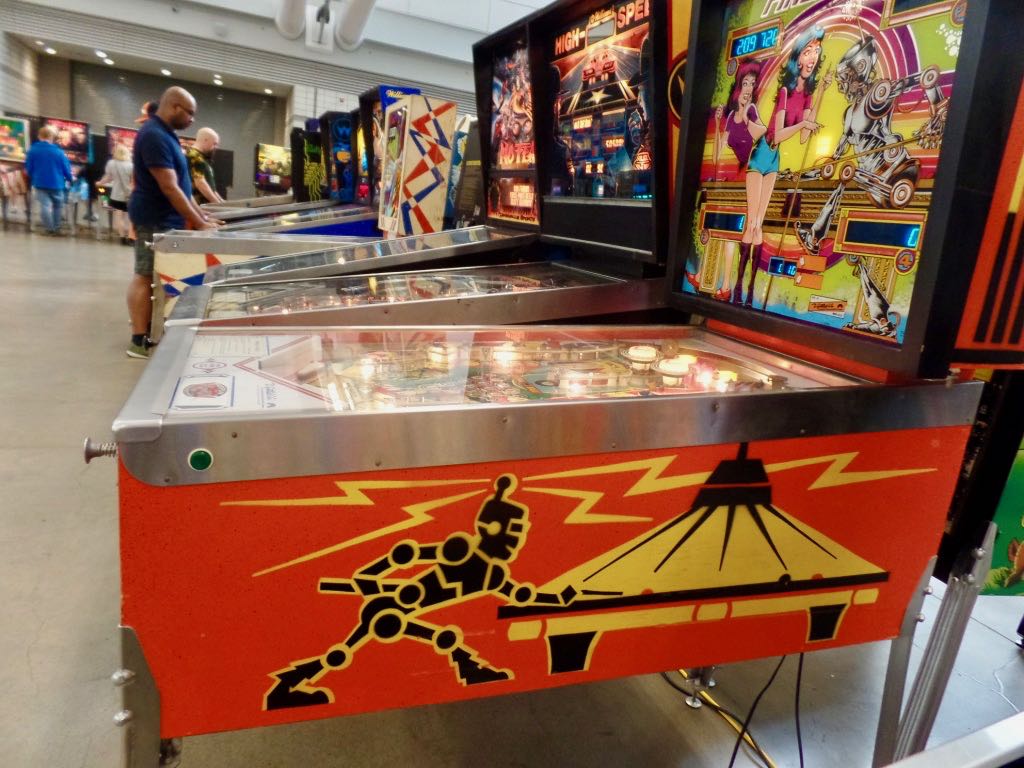 In the free-play area. Pinball is a 1979 Gottleib game that, sure, tosses in a robot because why not? Note the stenciled side-panel art, particularly, though. 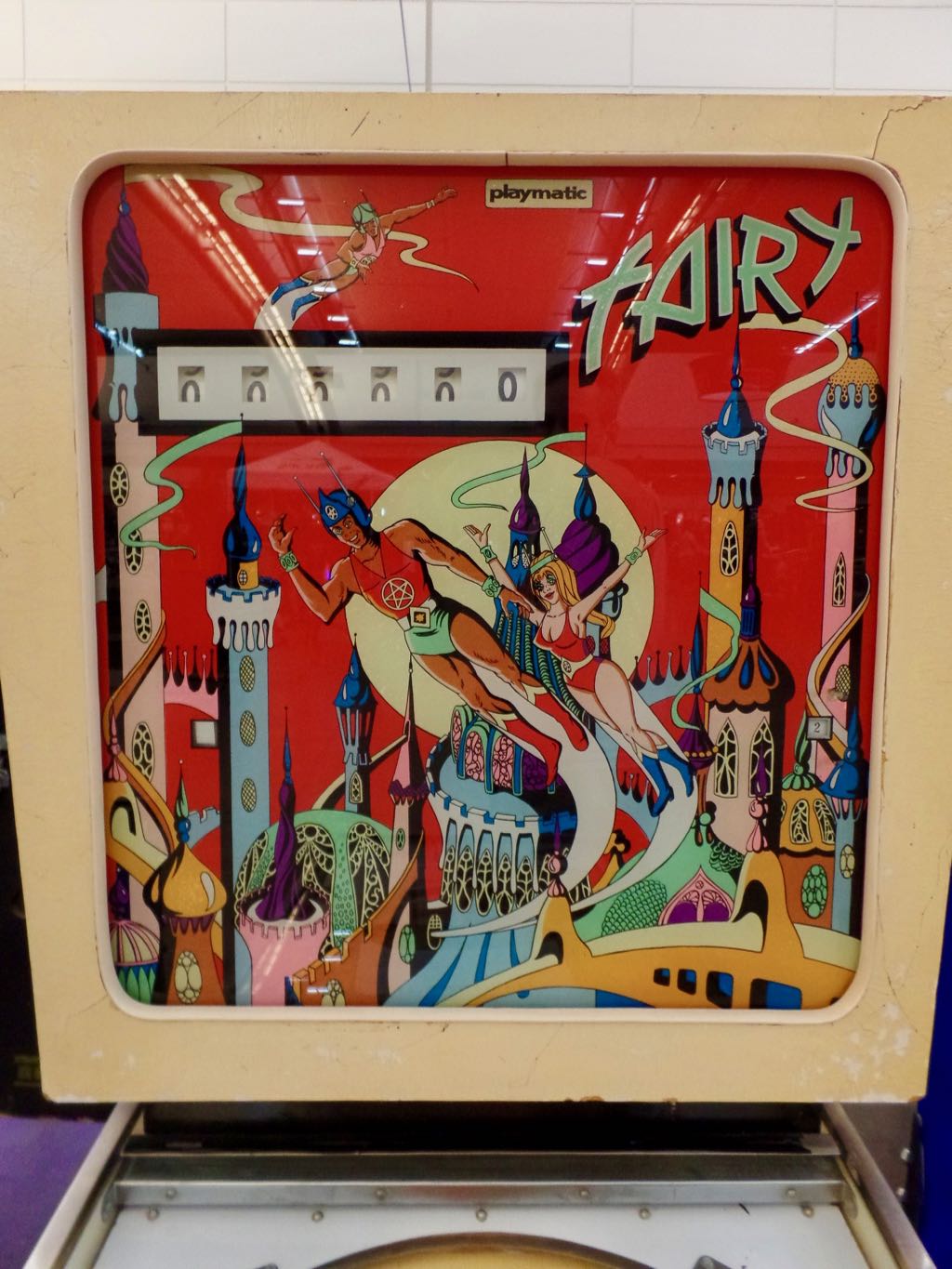 Playmatic's 1975 game Fairy, which manages by the addition of simple metallic headbands and wristbands to make this somehow a future-y instead of fantasy setting? 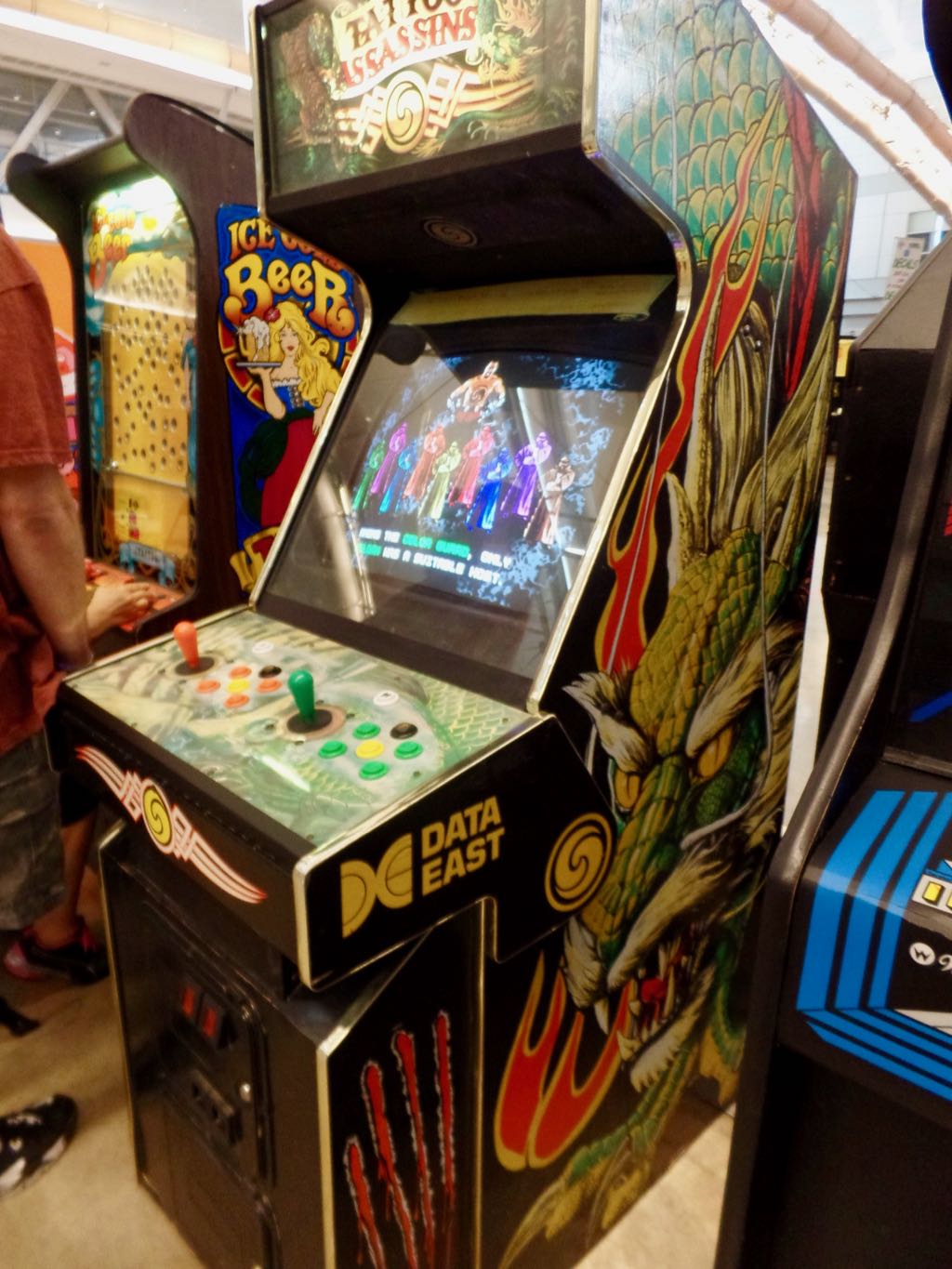 OK, so, here's a weird one. Cabinet with Data East's Tattoo Assassins, a never-released game of which only a handful of prototypes exist, and the Professional and Amateur Pinball Association, which supplies a lot of games to Pinburgh, has two of them. It's, in spirit, a Mortal Kombat-like game, noteworthy for having 2,196 finishing moves including (says Wikipedia) what Mortal Kombat III would call Animalities, dropping a DeLorean on your opponent, turning your opponent into a hamburger, and ``some nudity-based finishers''. O-kay then. 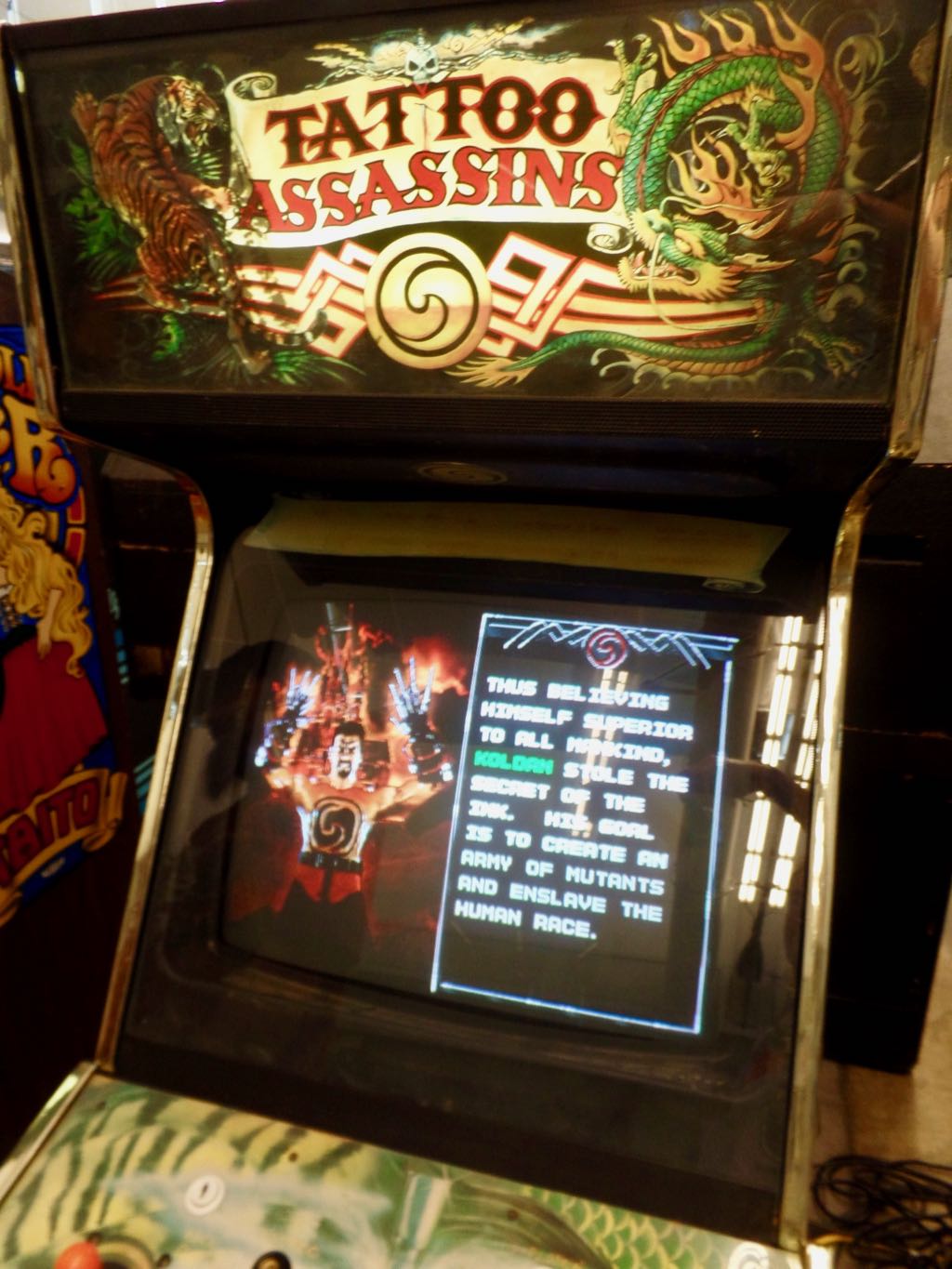 One of the backstory screens for Tattoo Assassins, which just fascinated me so. The key is everybody has tattoos made of some magic ink that can cause special moves. ``... Thus believing himself superior to all mankind, KOLDAN stole the secret of the ink. His goal is to create an army of mutants and enslave the human race.'' 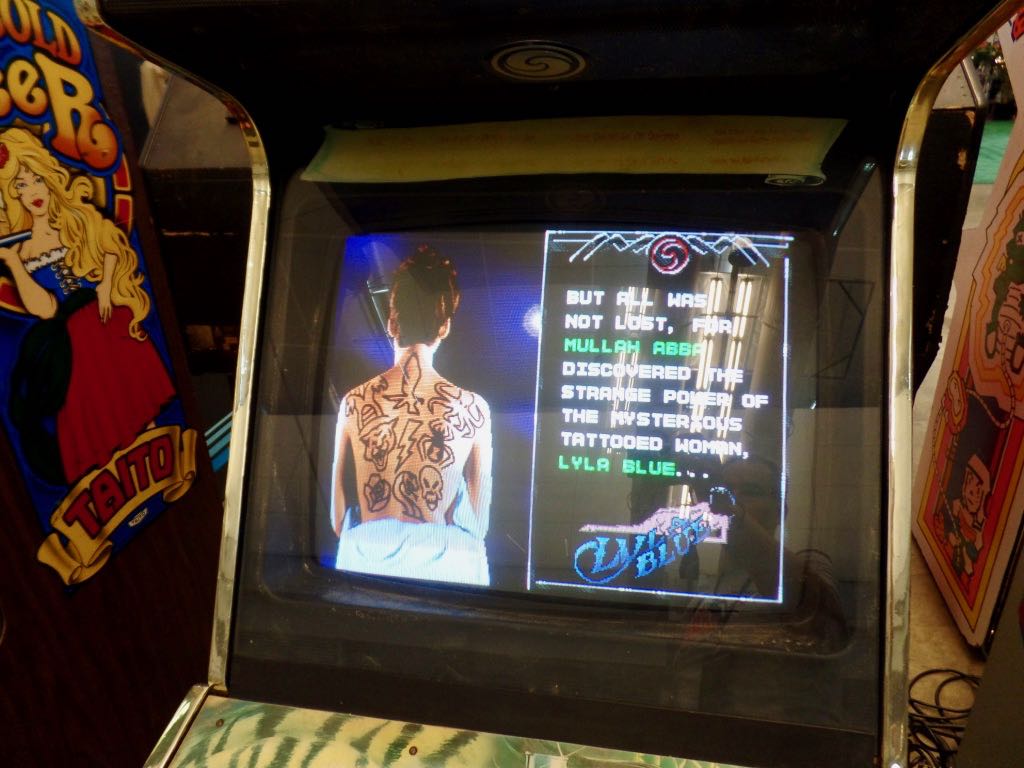 ``But all was not lost, for MULLAH ABBA discovered the strange power of the mysterious tattooed woman, LYLA BLUE ... '' who had emojis twenty years ahead of everybody else. 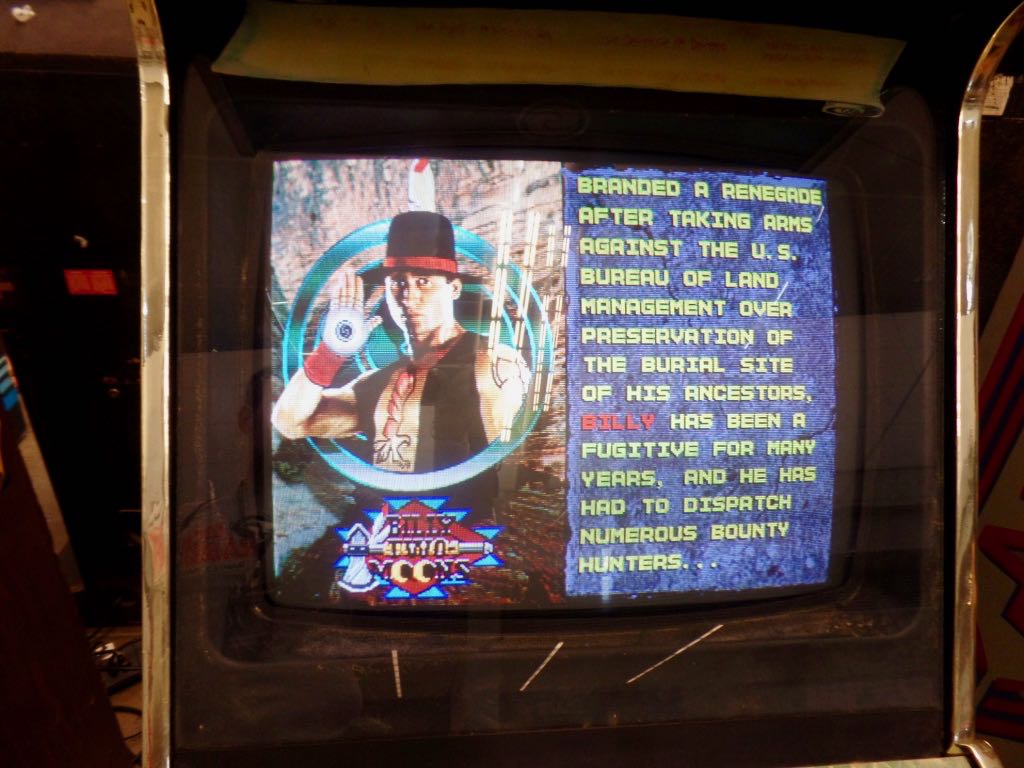 Character bios: ``Branded a renegade after taking arms against the US Bureau of Land Management over preservation of the burial site of his ancestors, BILLY has been a fugitive for many years, and he has had to dispatch numerous bounty hunter ... '' I know what you're thinking but, no, his name is Billy Two-Moons so it's kinda ... um. 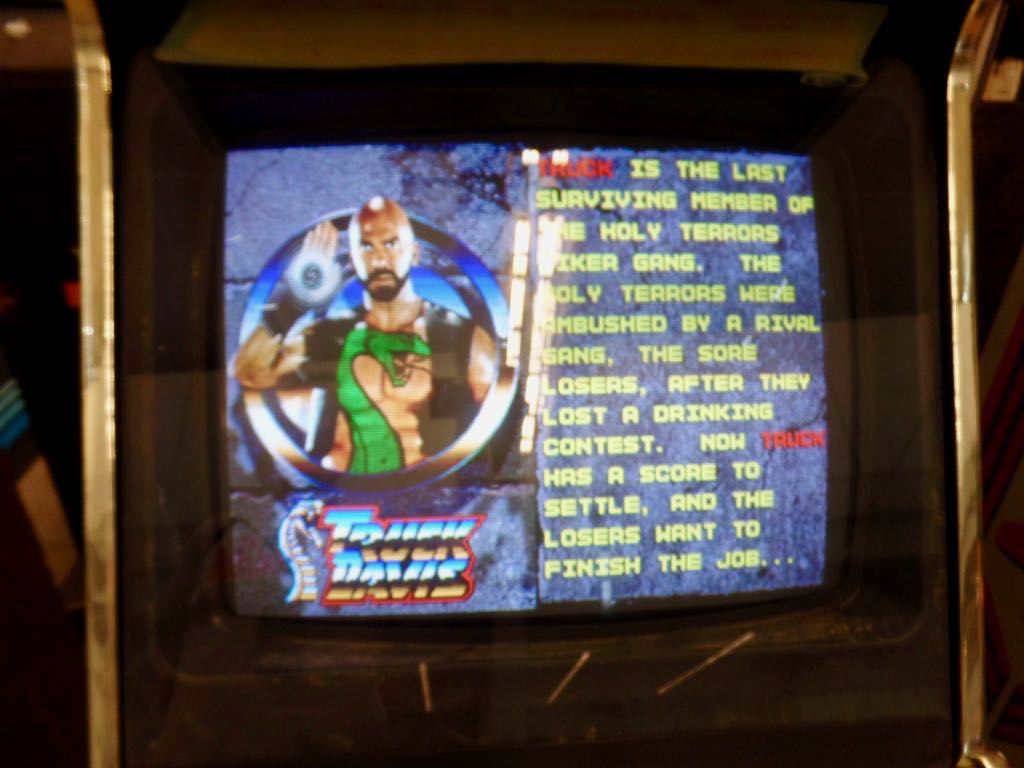 ``TRUCK [ Davis ] is the last surviving member of the Holy Terrors biker gang. The Holy Terrors were ambushed by a rival gang, the Sore Losers, after they lost a drinking contest. Now TRUCK has a score to settle, and the Losers want to finish the job ... '' 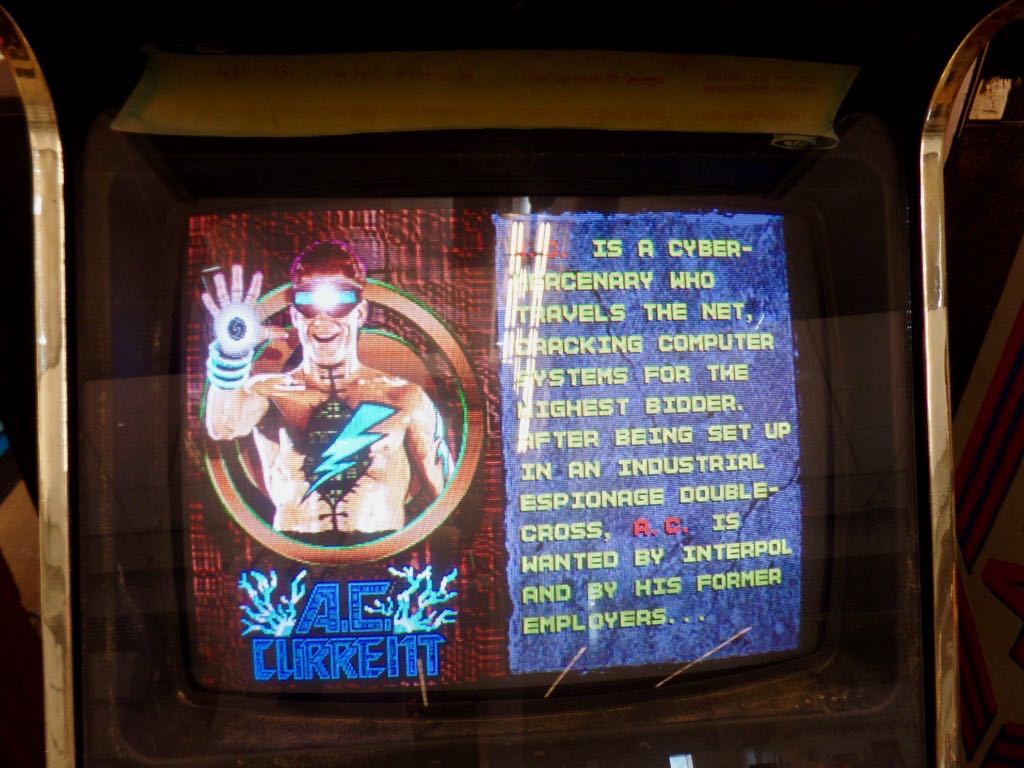 ``A.C. [ Current ] is a cyber-mercenary who travels the net, cracking computer systems for the highest bidder. After being set up in an industrial espionage double-cross, A.C. is wanted by Interpol and by his former employers ... '' And I know you're laughing but please, save some ability to laugh as you're going to need it ... 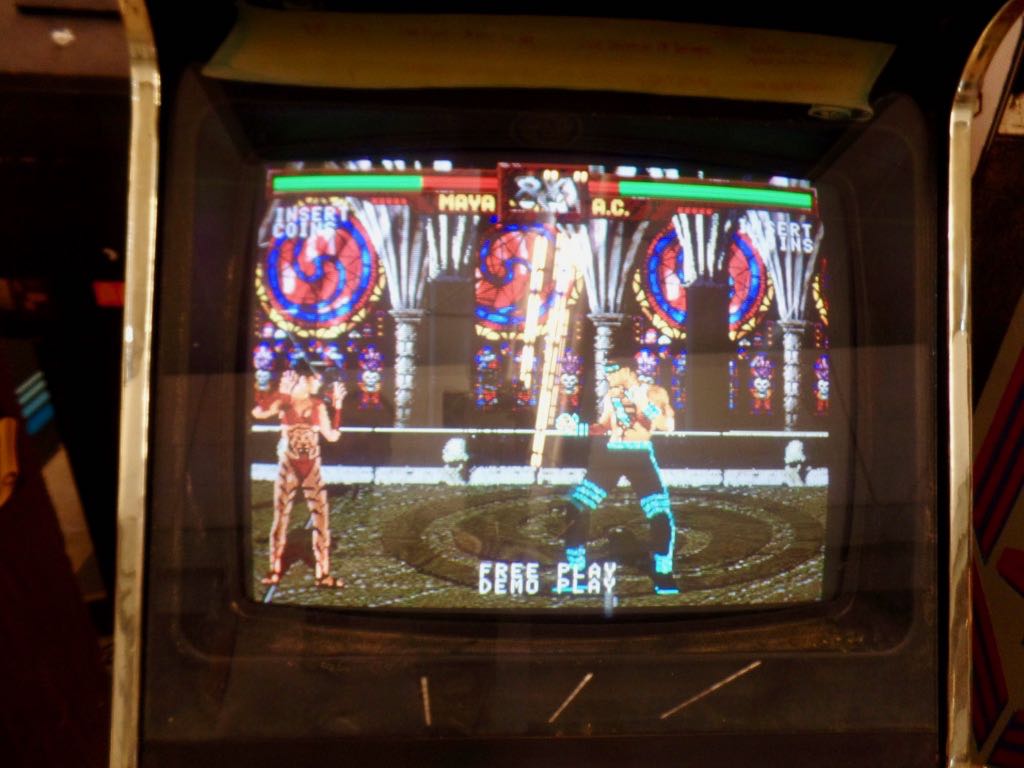 Oh, here's a moment of the attract mode, showing Maya battling A.C. in what certainly looks like a Mortal Kombat-ish game of around 1994, yup. 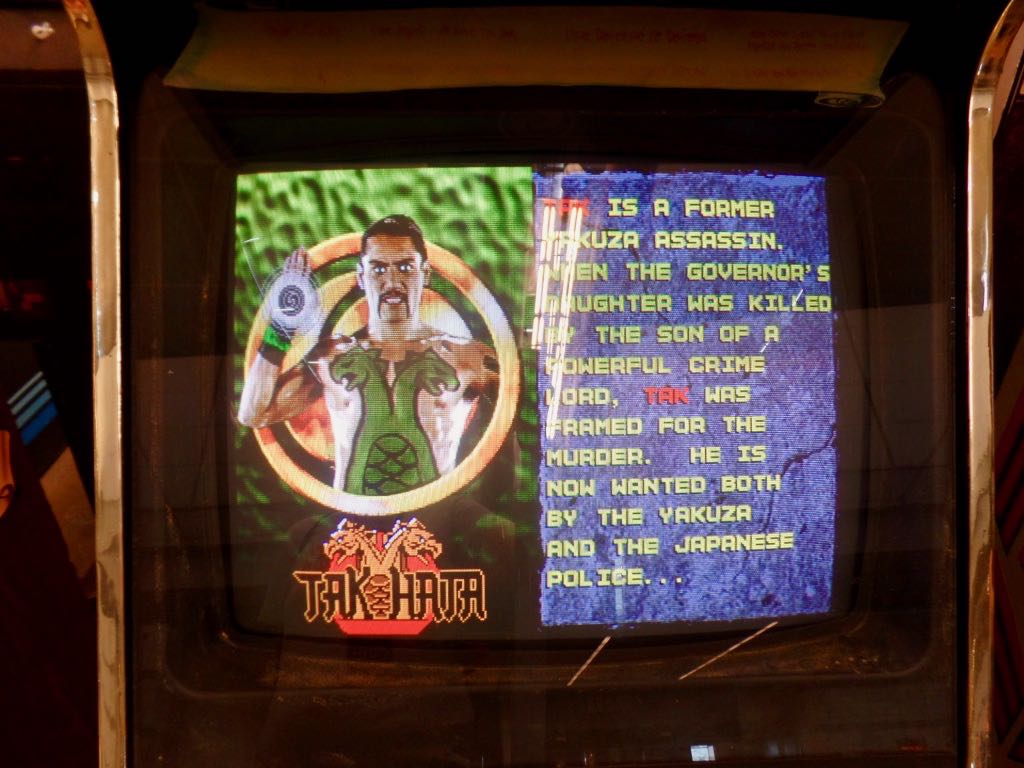 ``TAK [ Hata ] is a former Yakuza assassin. When the governor's daughter was killed by the son of a powerful crime lord, TAK was framed for the murder. He is now wanted both by the Yakuza and the Japanese police ... ''

Trivia: In late February 1665, the great frigate the London, moored at the Nore, a soundbank at the mouth of the Thames, was destroyed by an explosion, with more than three hundred men killed. The City of London commissioned a replacement, which the King would name the Loyal London. Source: A Gambling Man: Charles II's Restoration Game, Jenny Uglow. (As plague was creeping into England at the time, it was hard not to see an omen here.)

PS: Using my A to Z Archives: Surjective Map, a term of analysis that comes in handy ... doing analysis, really.