Well I sure hope I do better

Today was for publishing my big mathematics essay of the week. In My All 2020 Mathematics A to Z: Tiling, a topic I picked in part because I thought it wouldn't be a sprawling 2,500 tome heaped on my shoulders. Well, live and learn.

Let's get some more views in of Pinburgh/ReplayFX 2019. 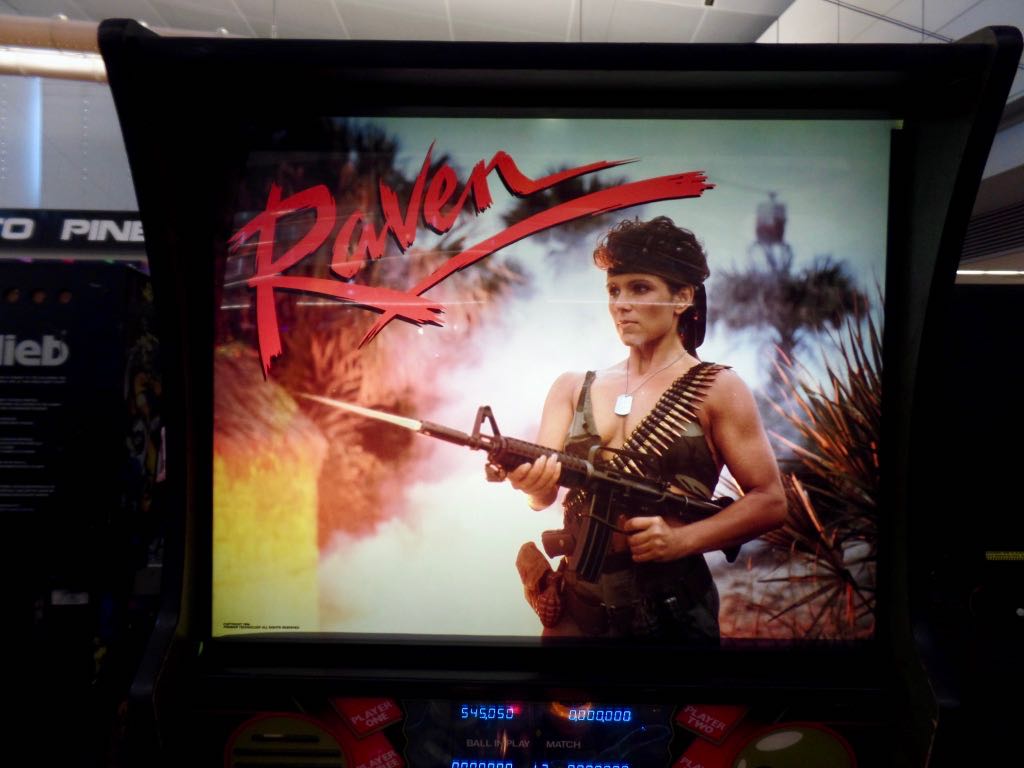 Backglass to Raven. So for a while there Gottlieb staged photographs for its backglasses, meaning they all look like Golan-Globus productions. Most of them are not this ... much, but they're all funny. 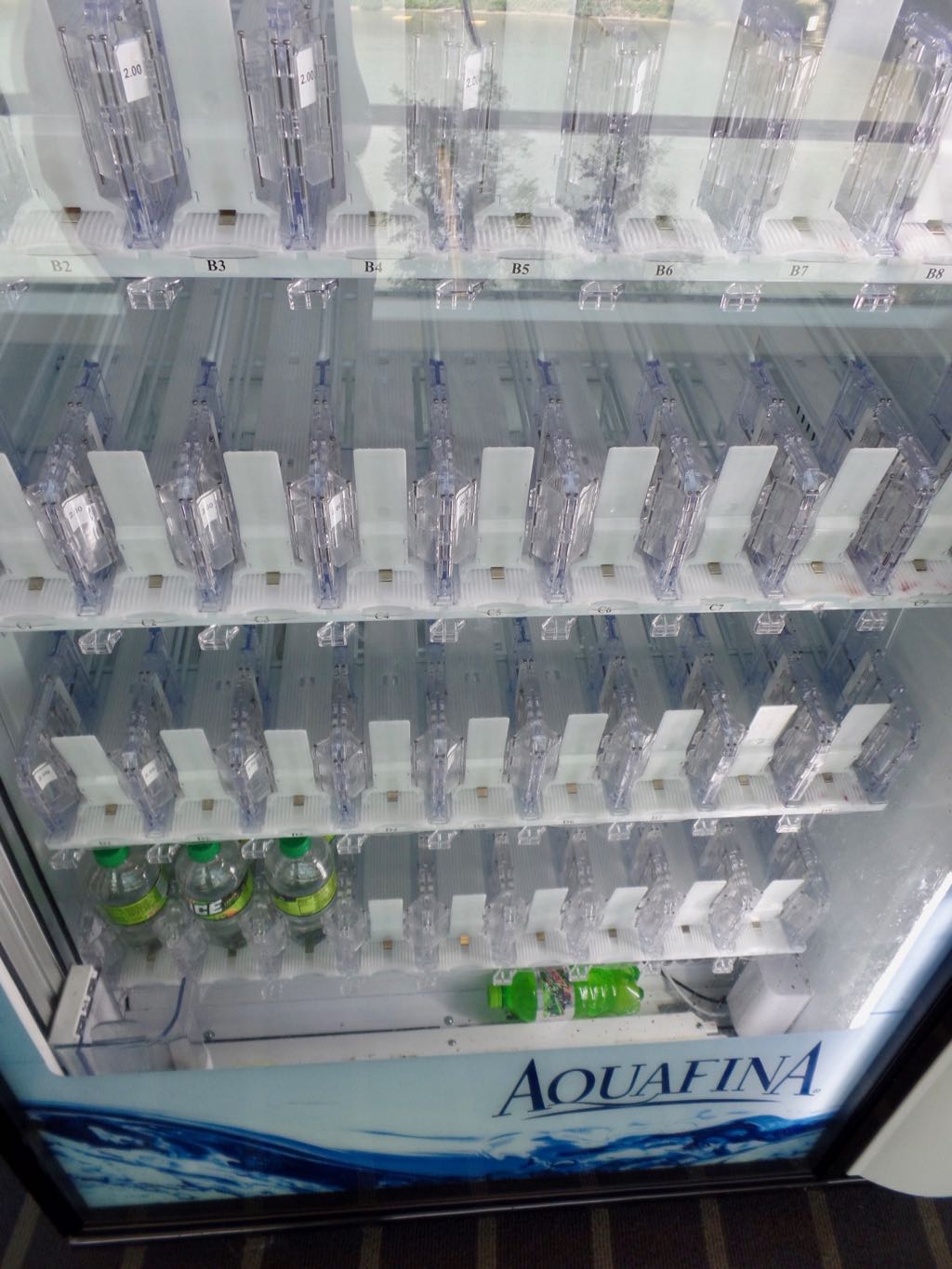 The cheap vending machine at the far far end of the convention center. You could get a bottle of pop for (I think) $2.50, instead of double that inside the convention center. Unfortunately nobody refilled the machine and so by Saturday it was empty. Note the bottle of Diet Mountain Dew, lost in the mechanism where it can't be retrieved, as the armature is supposed to carry your pop over to a slot on the side. That Diet Mountain Dew, dear reader, was mine, attempted to purchase on Thursday and sitting there lost the rest of the weekend. (The machine gave my change back.) 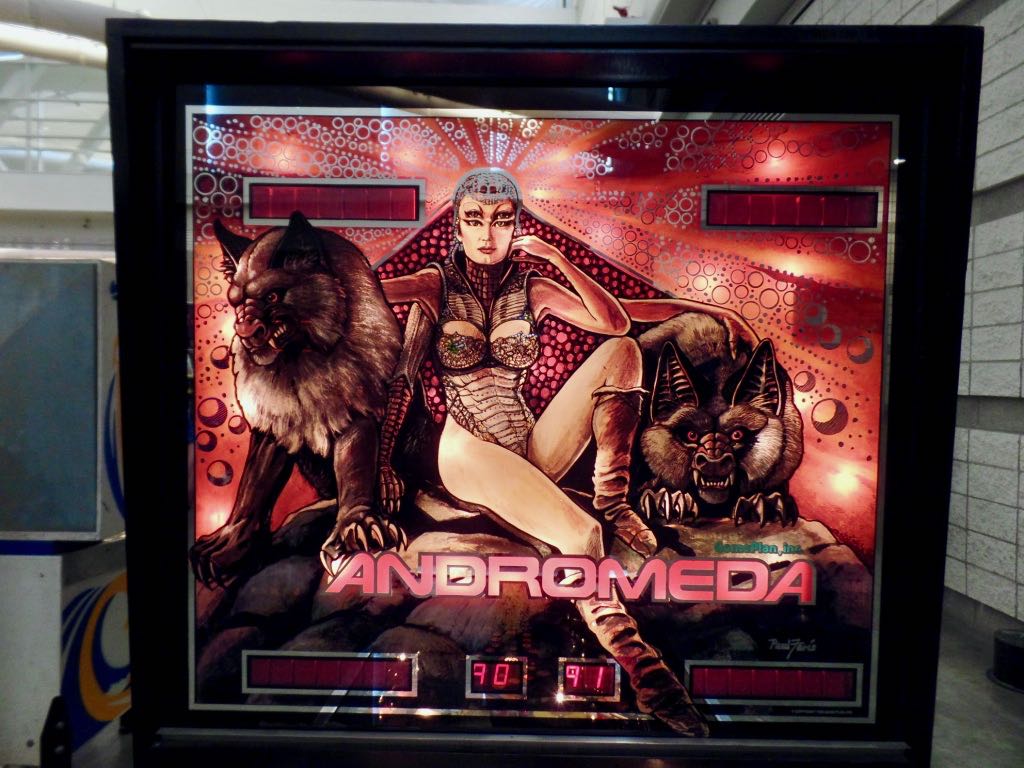 Backglass to Andromeda, a weird little GamePlan game, featuring a woman who's got an extra set of arms and extra set of eyes and apparently mastery of bat-faced wolves. 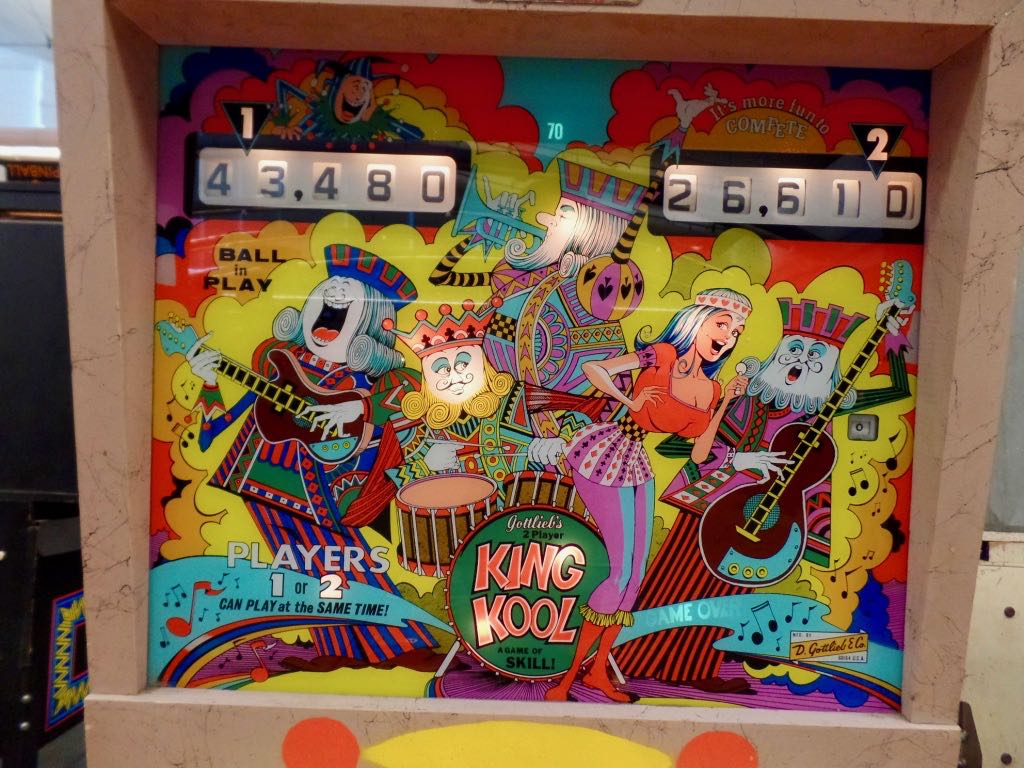 One of those great early 70s backglasses, here for Gottlieb's King Kool. 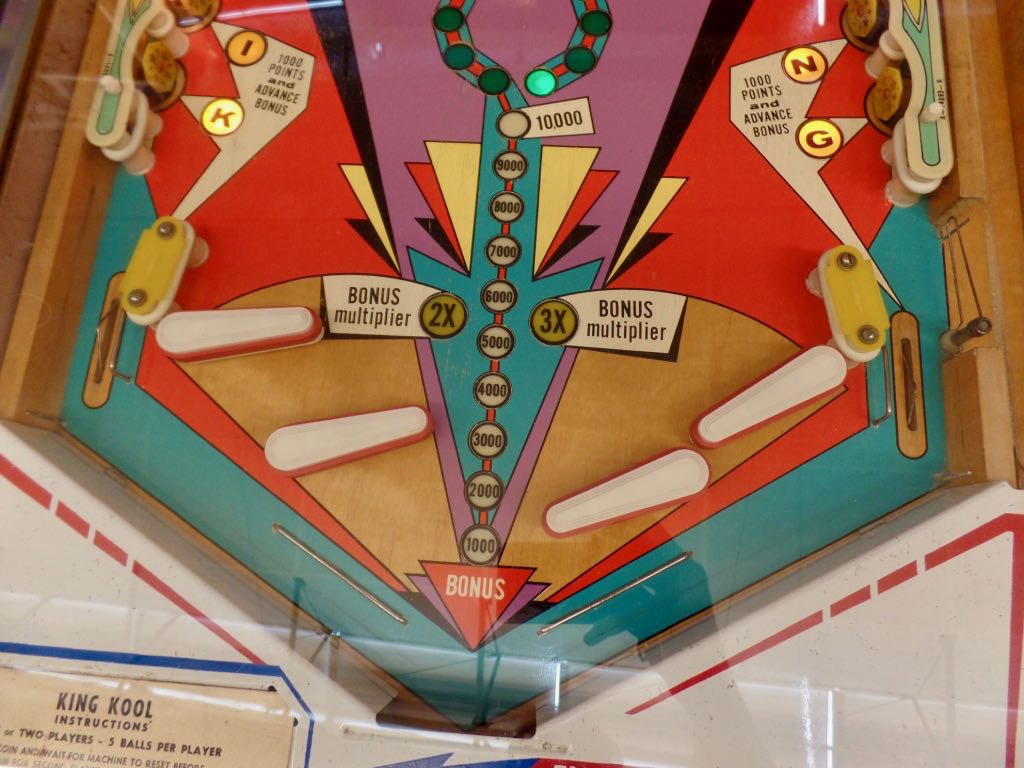 King Kool features this double-flipper arrangement, something sure to drive any modern player crazy because there's no inlanes and trying to trap on the lower flippers, like normal, ruins your game. Ah, but, note the two-way wires on the outlane switches: the designers thought it plausible that a ball might roll back up that outlane, possibly back into play. Also, given those pins, it's just possible that someone could nudge the game just right, as a ball drains, and hold the flippers down so it bounces back into play between the flippers. I doubt anyone has mastered that. Well, Keith Elwin has, but anyone else. 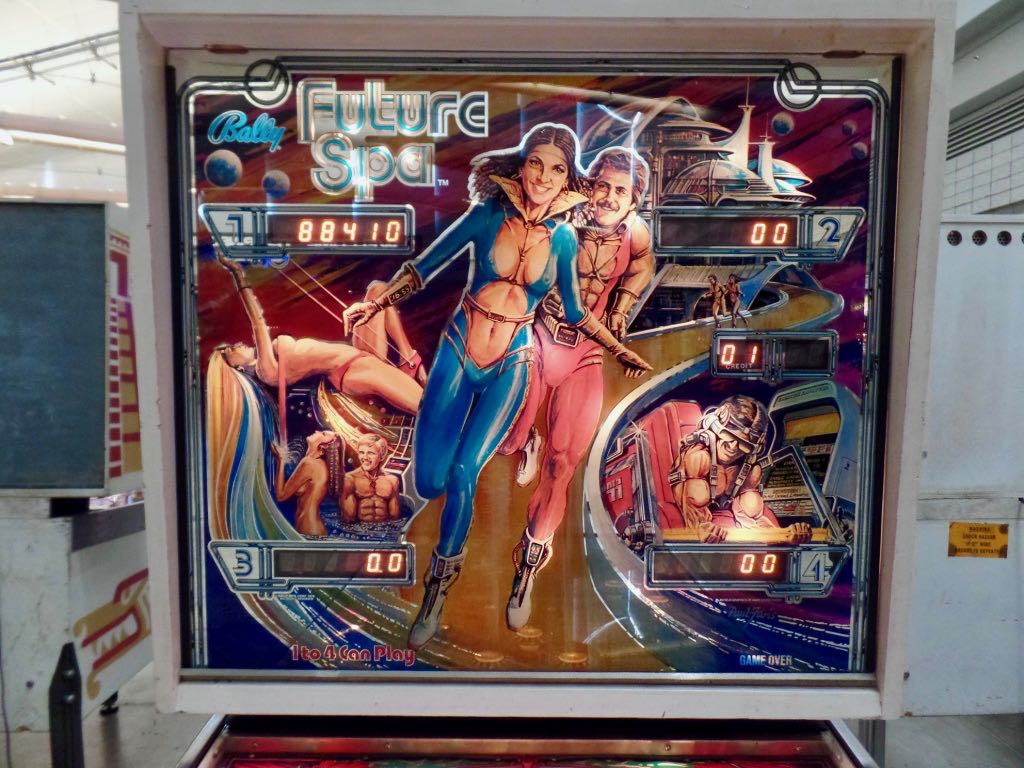 Bally's Future Spa, which I've probably shown before, but which is a wonder every single time you see it. 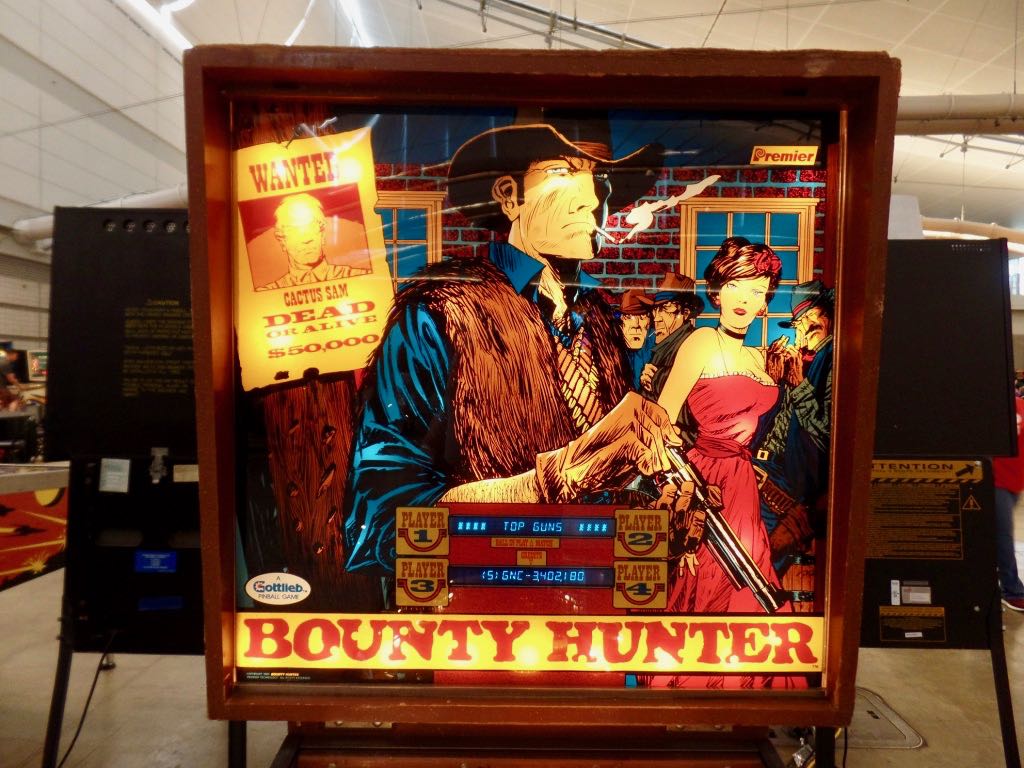 Backglass to Gottlieb/Premier's Bounty Hunter, a 1985 game that turned out to be surprisingly fun. The Internet Pinball Database says it was inspired by the Spanish graphic novel series Torpedo 1936 that I never heard of before. 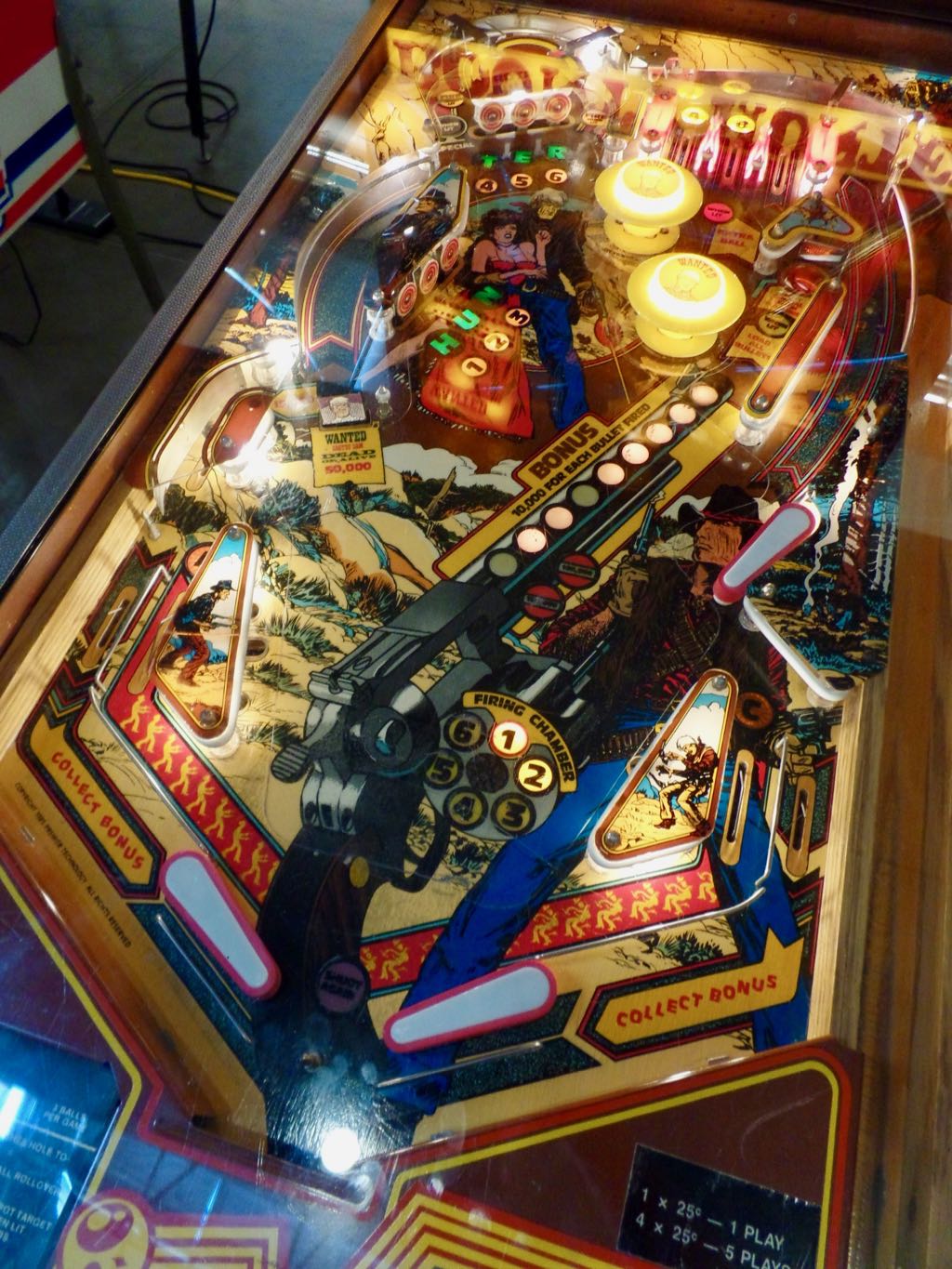 The playfield for Bounty Hunter. Like many Gottlieb/Premier games, it's got a lot of shots for which it's not clear just how you're supposed to make them. But the art has some great composition --- follow the line of that gun, for example --- and there's these lovely curved loops all along the left side that are good fun. 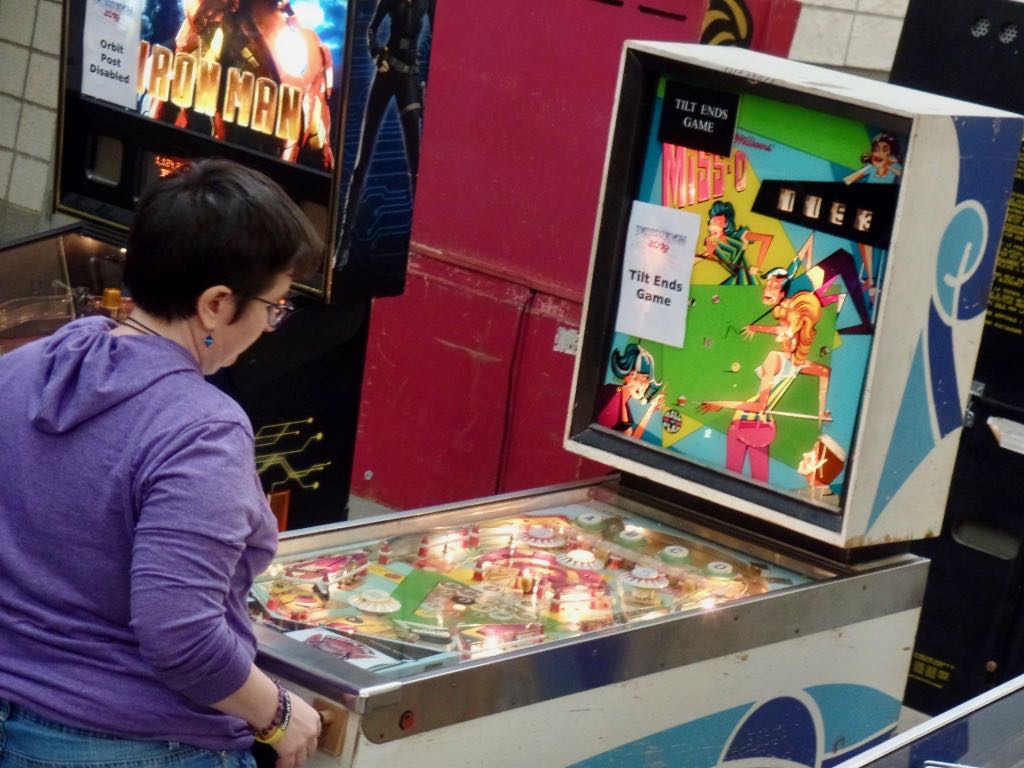 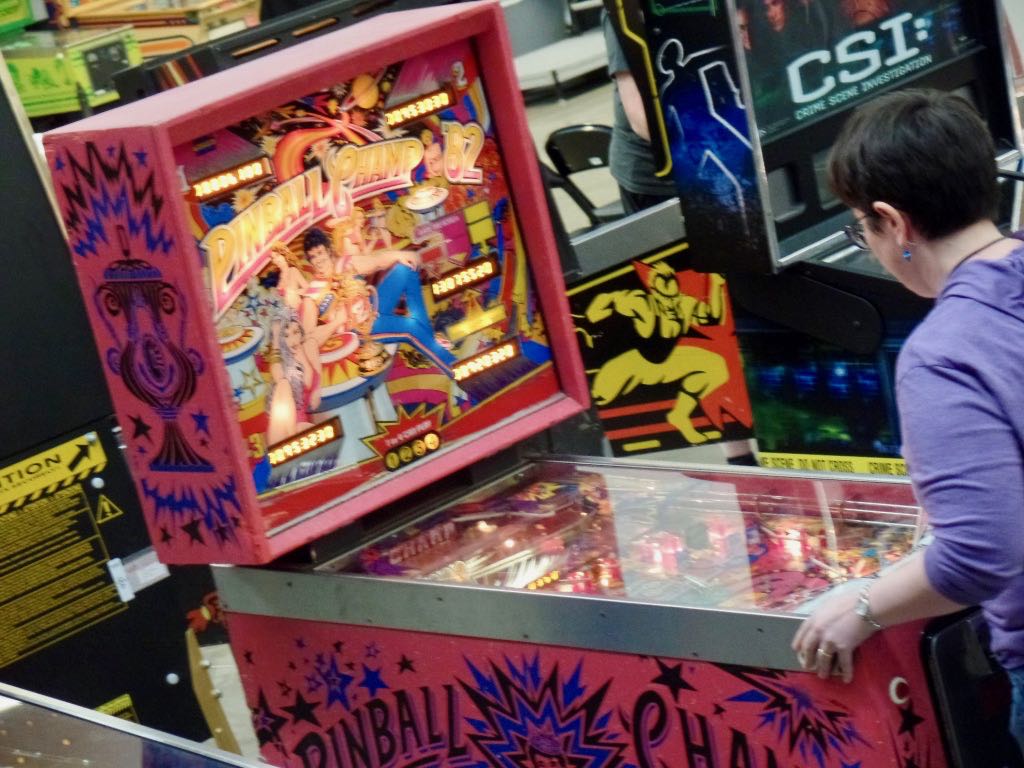 I think at this point she's just having fun, playing the Zaccaria table Pinball Champ '82, which you can see from the backglass was maybe the most 1982 thing ever. 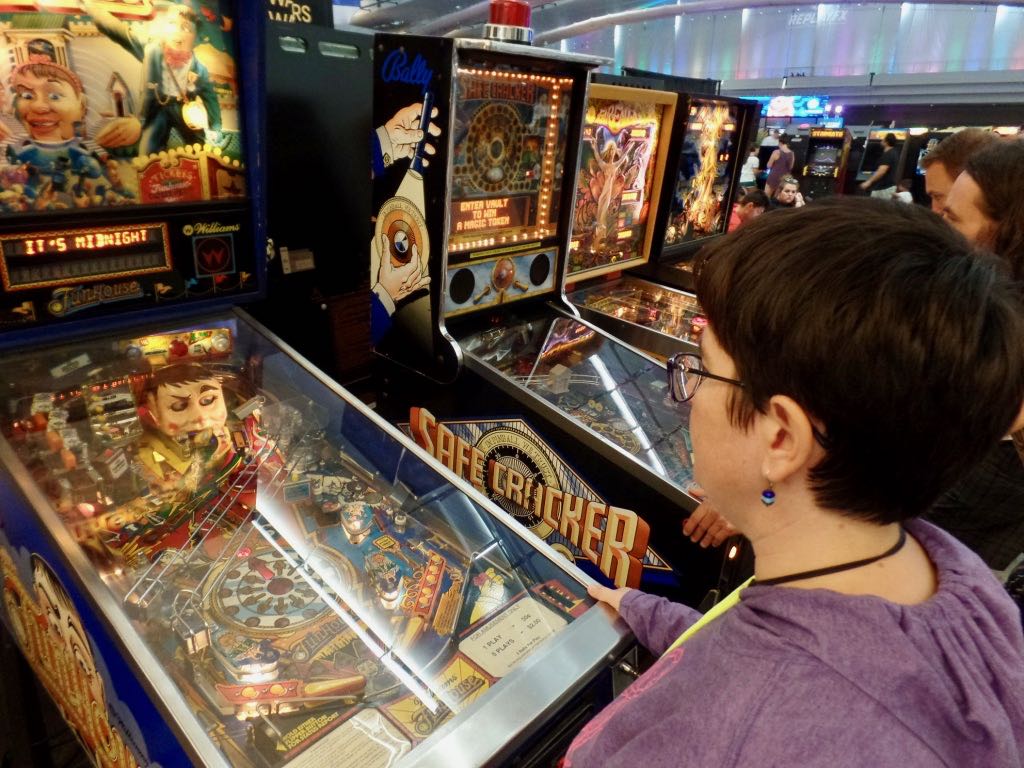 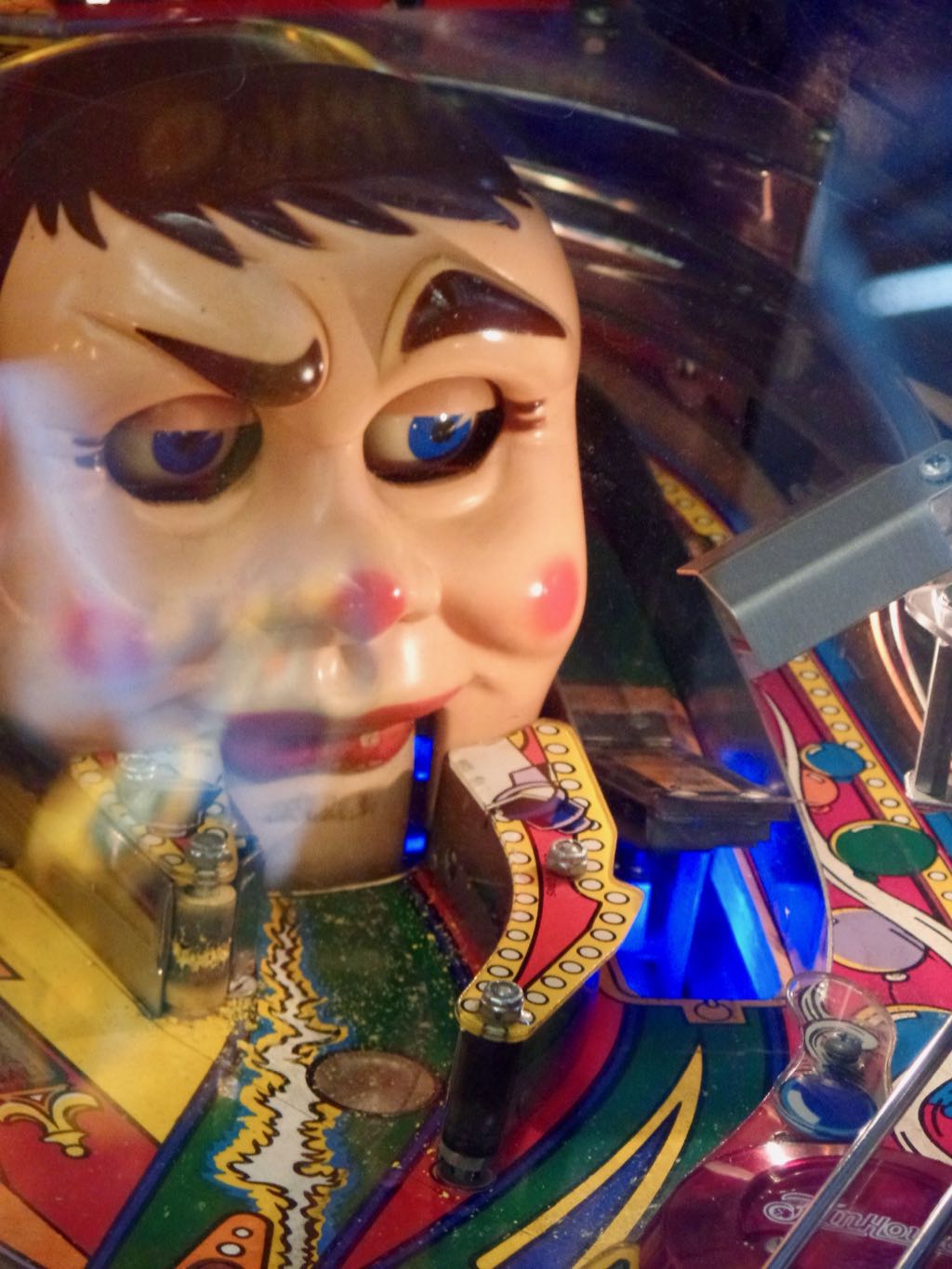 ``You don't want to go down there'', explains Rudy, of his mysterious basement glowing a magical blue.

Trivia: Humphrey Bogart and Lauren Bacall were paid $4,000 per show for their part in the 1951-52 syndicated adventure radio series Bold Venture. Source: On The Air: The Encyclopedia of Old-Time Radio, John Dunning. (I believe that's four thousand dollars total, for the husband-and-wife pair, but Dunning is ambiguous. He does say the show had a budget of $12,000 per show but again I'm not clear if that is besides the salary for the two.)

Currently Reading: The Space Shuttle Decision: NASA's Search for a Reusable Space Vehicle, T A Heppenheimer. NASA SP-4221. I had not appreciated just how, in the 1960s, everybody with a voice in space planning --- NASA, the Air Force, the Bureau of the Budget, the National Aeronautics and Space Council, even the State Department and intelligence agencies --- agreed a space shuttle was a good idea. It's just when actual plans got seriously made that everyone started to hate it.