Yes, we'll all walk along

So, some good news:

bunny_hugger has had a Covid-19 test, and it came back negative. Given our close quarters and constant companionship, it's hard to figure how I could be anything but negative also.

The other side of that is why has she had a Covid-19 test. This is because she had surgery this morning. It was not an emergency matter. It was for a chronic pain that hasn't responded to any lesser interventions. In an ideal world, it would have waited until after the pandemic but the Lord alone knows whether that day will come.

The greatest irritation is that she went on Friday to a Lansing-area clinic, and waited around for an hour for a Covid-19 test, only for the clinic to not actually turn over results to anyone. In fact, this morning, the hospital couldn't find evidence that the Lansing clinic had done anything including open a record for the test. We had to go in fifteen minutes early, and use up one of the (Ann Arbor) hospital's fast tests, and we can only guess what will come of the swab. Worse, the test this morning was much more intrusive, jabbing a swab the length of Grand River up her nose, and by a nurse who was very good overall --- smooth, confident, efficient --- but who kept bringing up how bad the test was and how she couldn't understand why the Lansing-clinic test wasn't processed. Apologies are good but at some point you're better off not bringing up what you're sorry for.

I was allowed in to the pre-op, as she got prepped and put on the hospital gown and all that, and took charge of her rings so they wouldn't get lost in surgery. I also watched the nurses and anaesthesiologists completely fumble reassuring her about being put under. The promise that she would not remember the experience did not help her anxiety about potentially having a bad experience in surgery and then having the experience wiped out of her memory. I couldn't think of a way to warn them that their reassurances were just worsening the anxiety point, though.

After several rounds of

bunny_hugger giving her name and date of birth and what she was there for, and briefings from several people, she was finally wheeled off to the operating rooms and I was left to go wait outside. They had reserved seats for the adult companions of everyone in the clinic, which was pretty nice really. I could go off to the bathroom or to get a sandwich or something and not worry about losing a pretty good seat. I e-mailed our parents, first when she went in and then when I got word that she was done. (And my mother phoned me to ask what this was all about. I apparently hadn't shared in enough detail for her.)

And then about three hours later I got my time in the consulting room with her surgeon and got a briefing about what to do. I had time to pick up her prescriptions from the pharmacy and learn that the gift shop next to the pharmacy was closed and had been since March. It had a sign about the upcoming sale, for the 20th of March, in the window. (The main hospital's gift shop has reopened, though we weren't at the main hospital.)

Her surgery all went well, though, no complications obvious, and after a bit of time in the post-op ward I was pulling my car up and driving her home. We considered stopping at White Castle on the way home --- it was our first time near one since the last Marvin's Pinball League meeting, back in March --- but though we were hungry, she was advised to not have anything too fatty too soon. So, we got home, had some soup, and she got a couple hours' sleep.

All seems to be going well. She's sore, and needs to take a couple days easy. She banked some lectures for classes for tomorrow and can avoid doing any serious schoolwork through to next week. And she even got today's entry in her sidewalk-stamp blog posted early. She's allowed and encouraged to walk for exercise soon, though, so perhaps that blog will go without a missed day after all.

Thanks, all, for your good wishes and concern and I'm so happy to have a major stressful event pass and the world open up to good things again. And then for

bunny_hugger's surgery to go well right after that? That's wonderful. 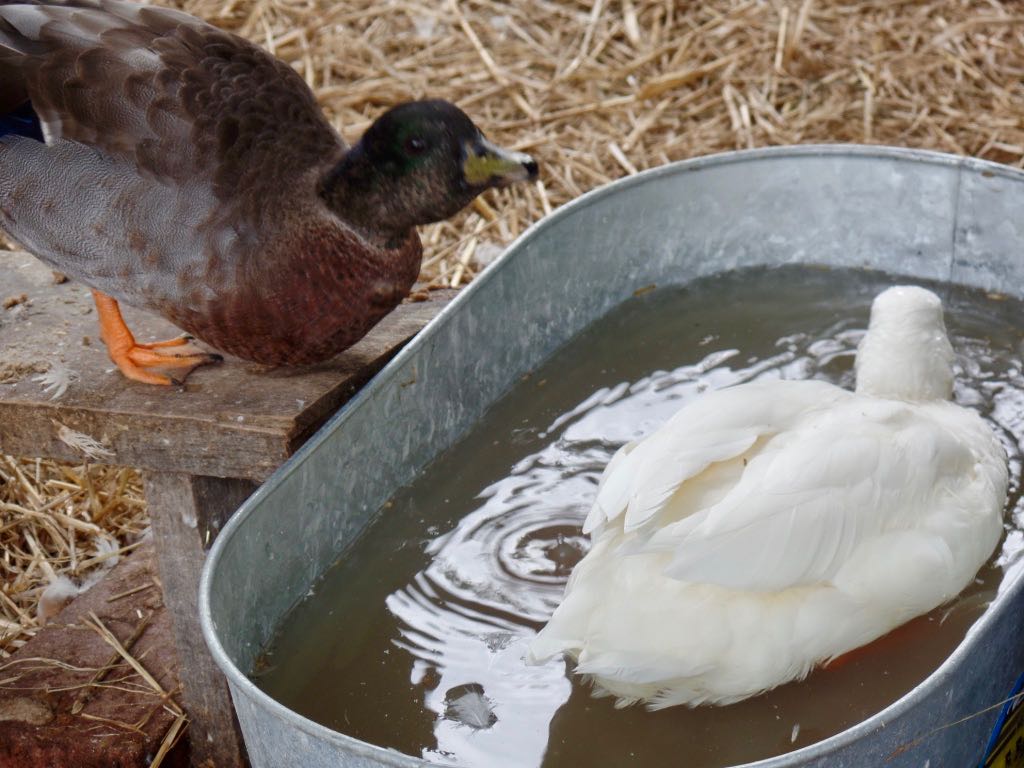 Kidding! Here's more ducks that shared a pen with the bunnies. 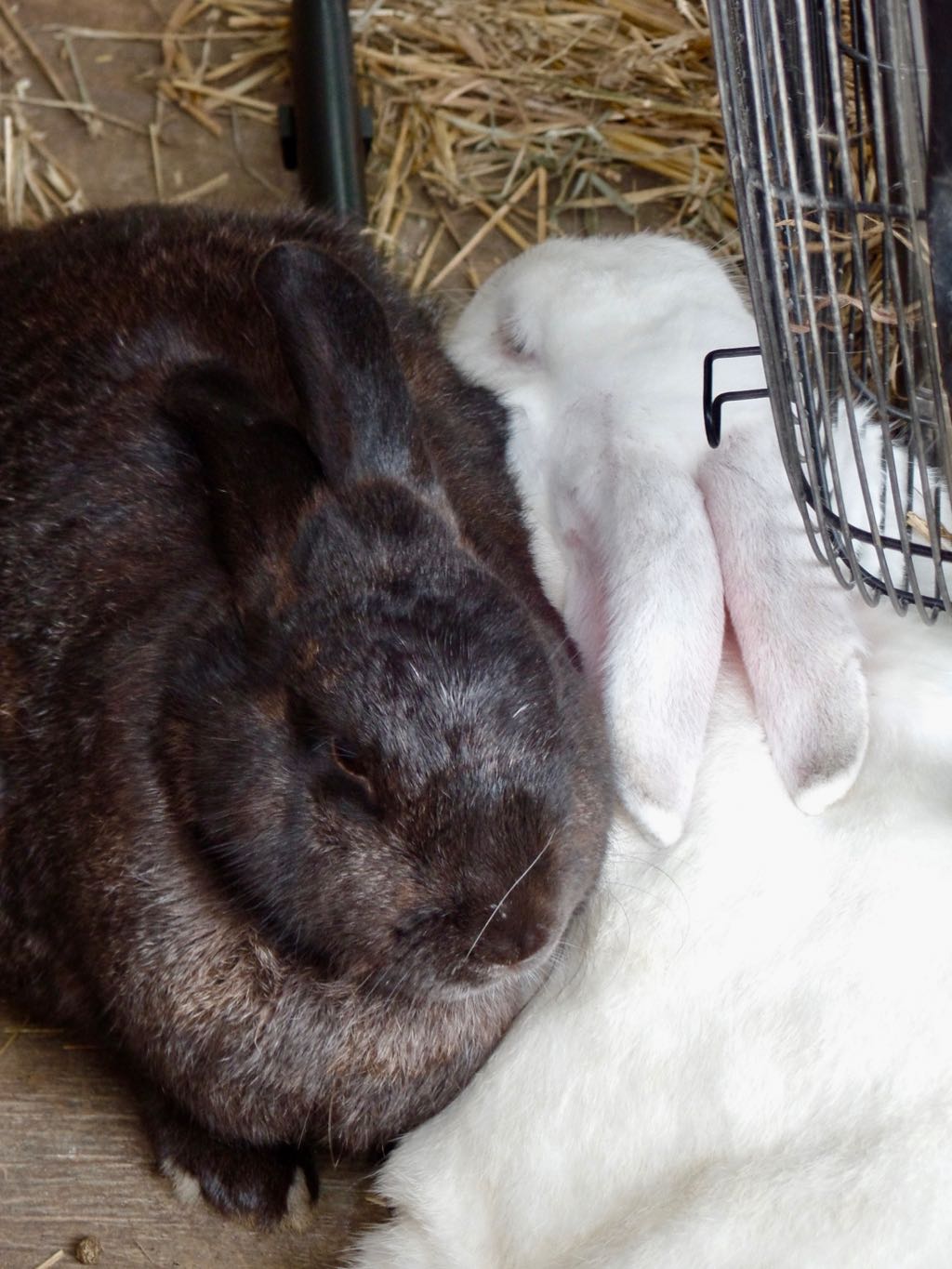 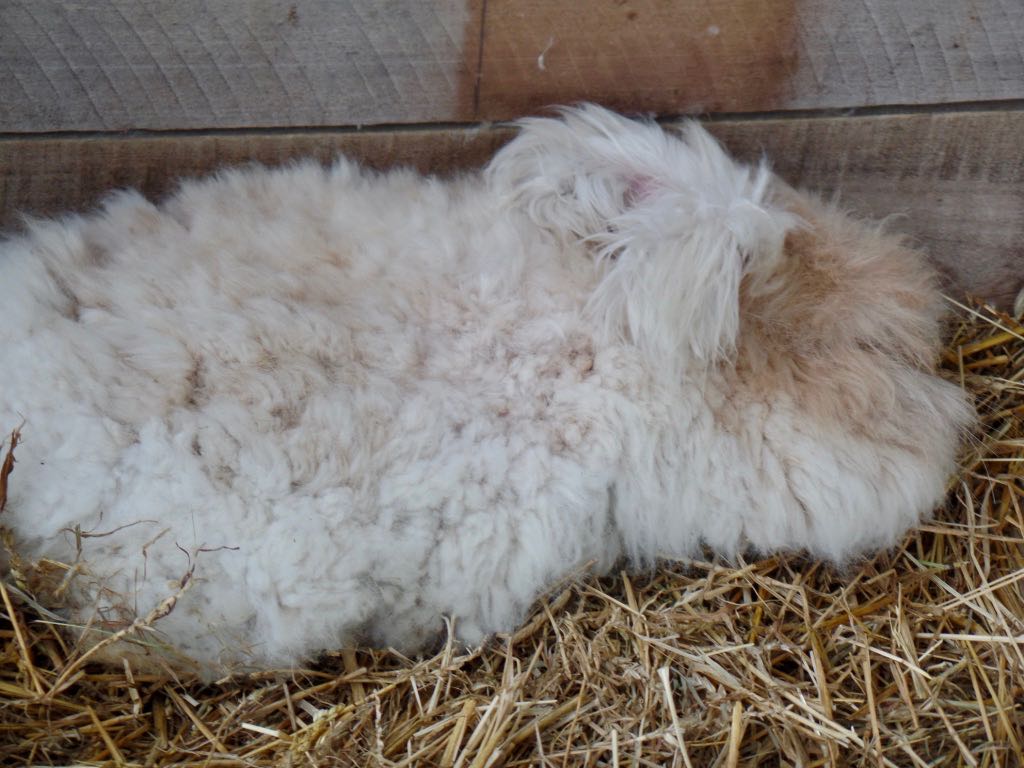 And now this I believe is a mop head that lost its handle inside the rabbit enclosure. 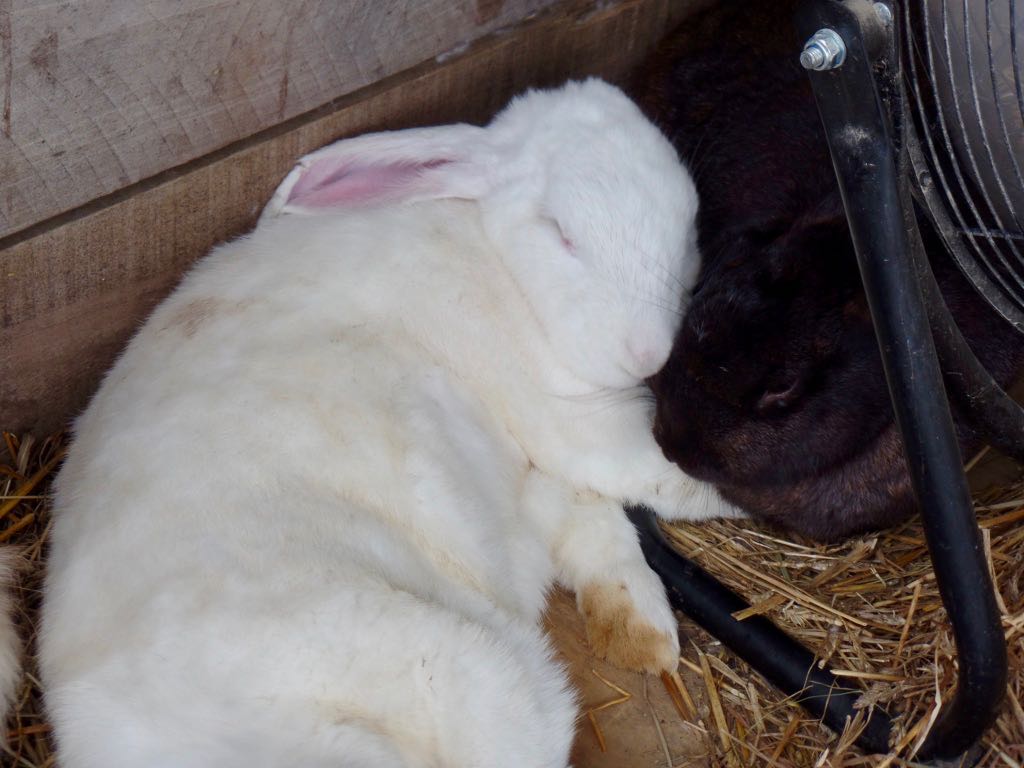 Oh, now, there's just the most adorable picture of bunnies heaped up against one another. 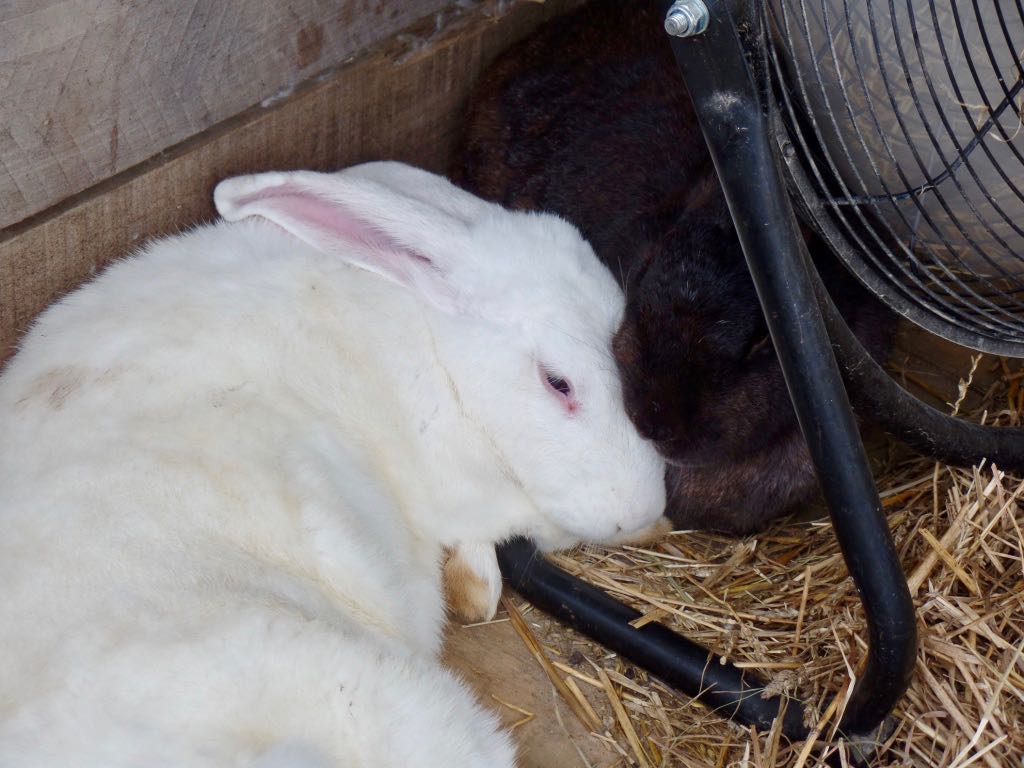 Kidding! Here's a more adorable picture of bunnies heaped up against one another. 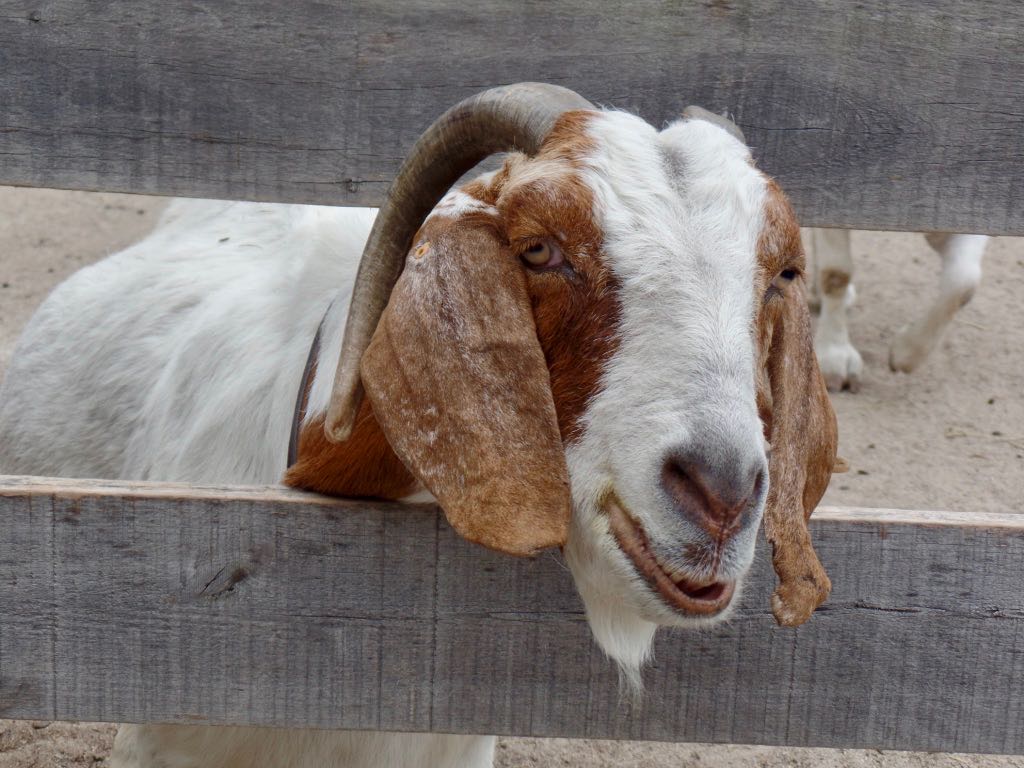 Goat would like to know if you've reconsidered his offer, though. 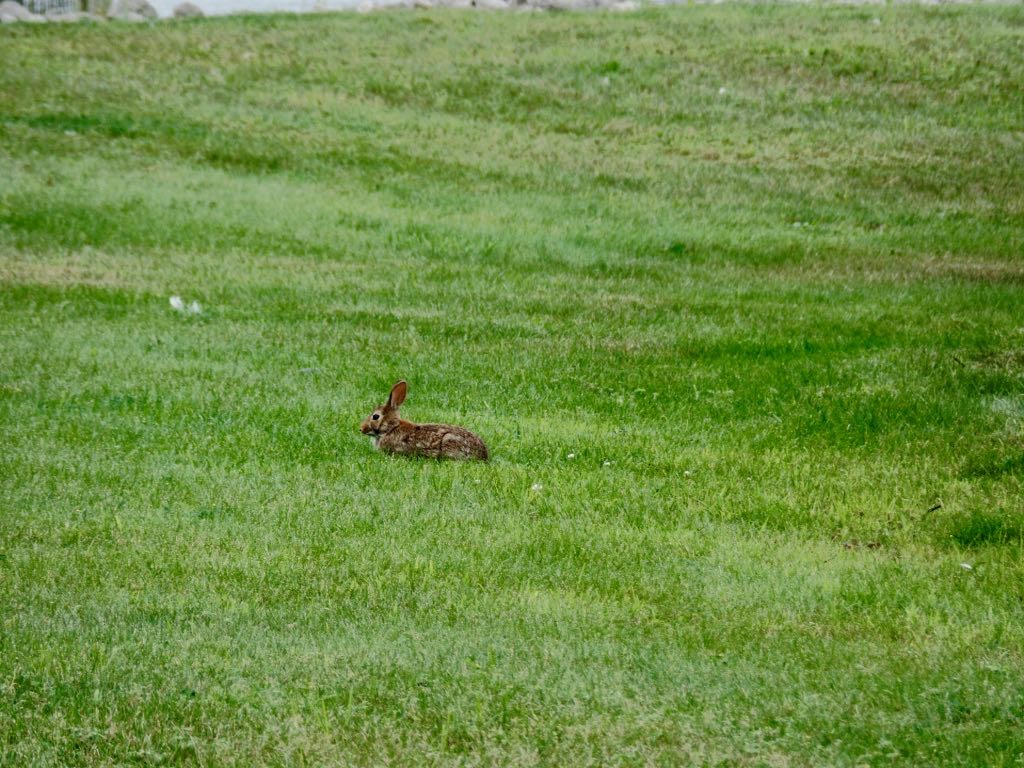 And then! We had the good fortune to see wild cottontail rabbits, grazing in the lawn between Corkscrew and the lagoon. 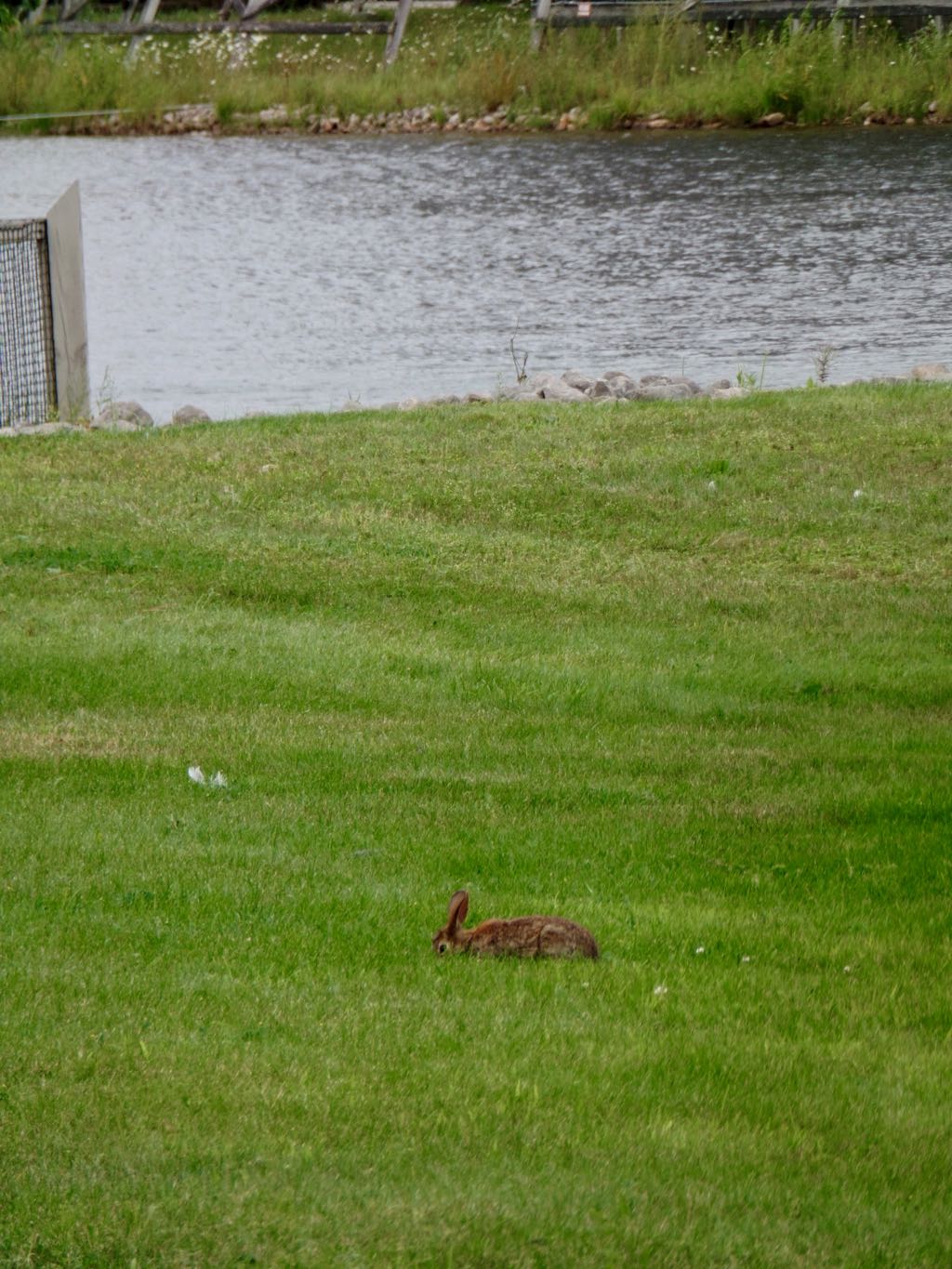 So we stopped and watched them at work. Some people passing by snarked about our watching wild rabbits, but we always like seeing the wildlife that lives in parks. Also I guess since we have season passes and have been to Michigan's Adventure like eight billion times we don't feel the need to do things of any intensity when we're there. 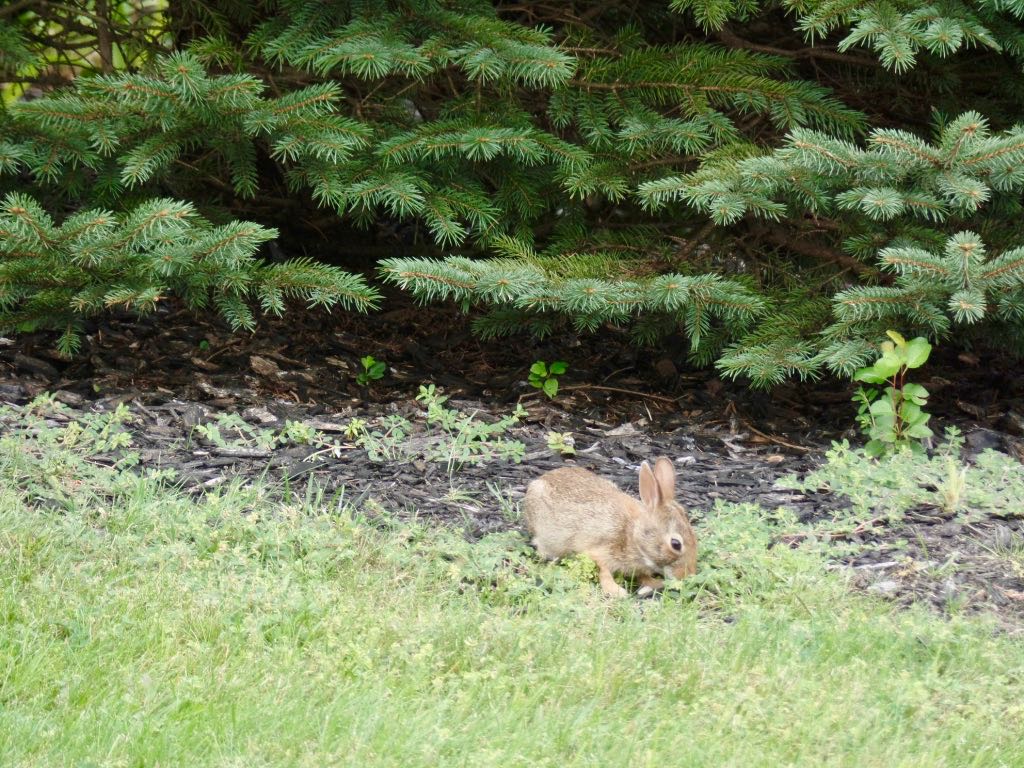 We can just take in happy scenes, like this young rabbit foraging near an evergreen. 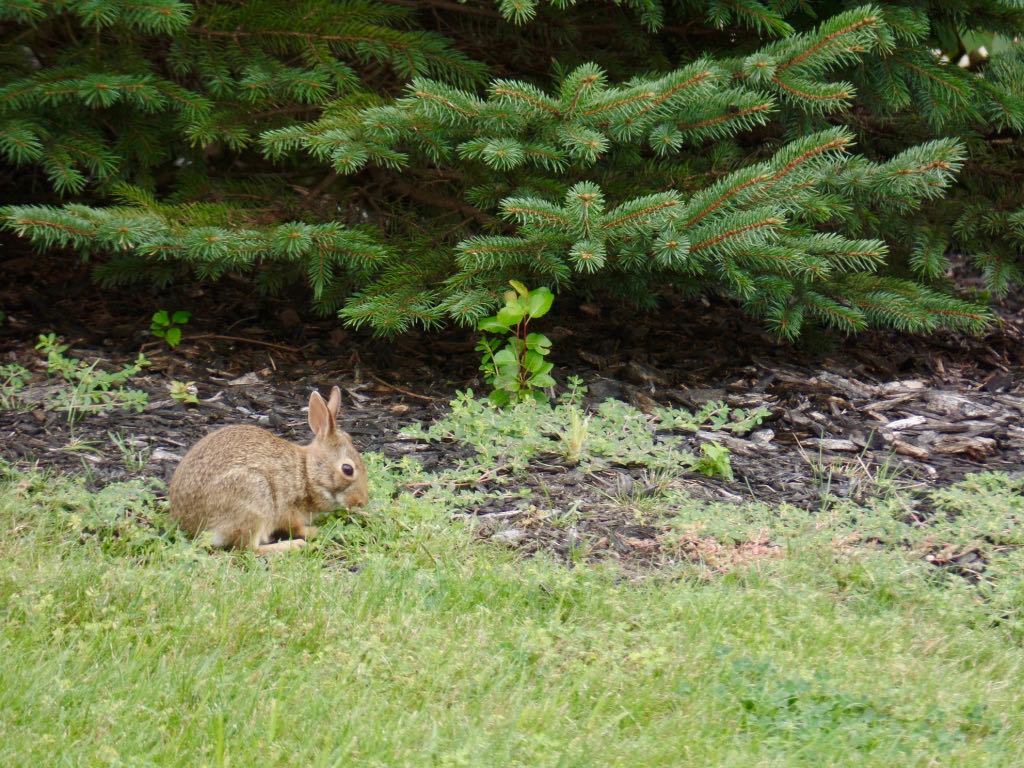 Look at that leg definition and you can almost see them chewing. 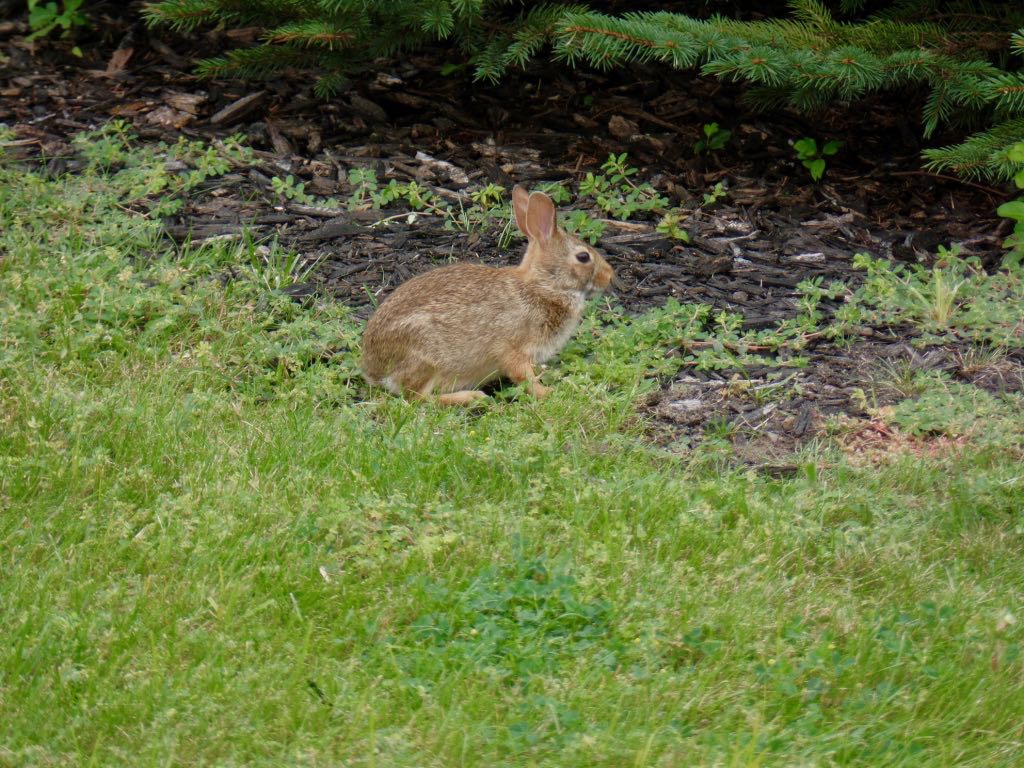 Young rabbit finds something worth attention. 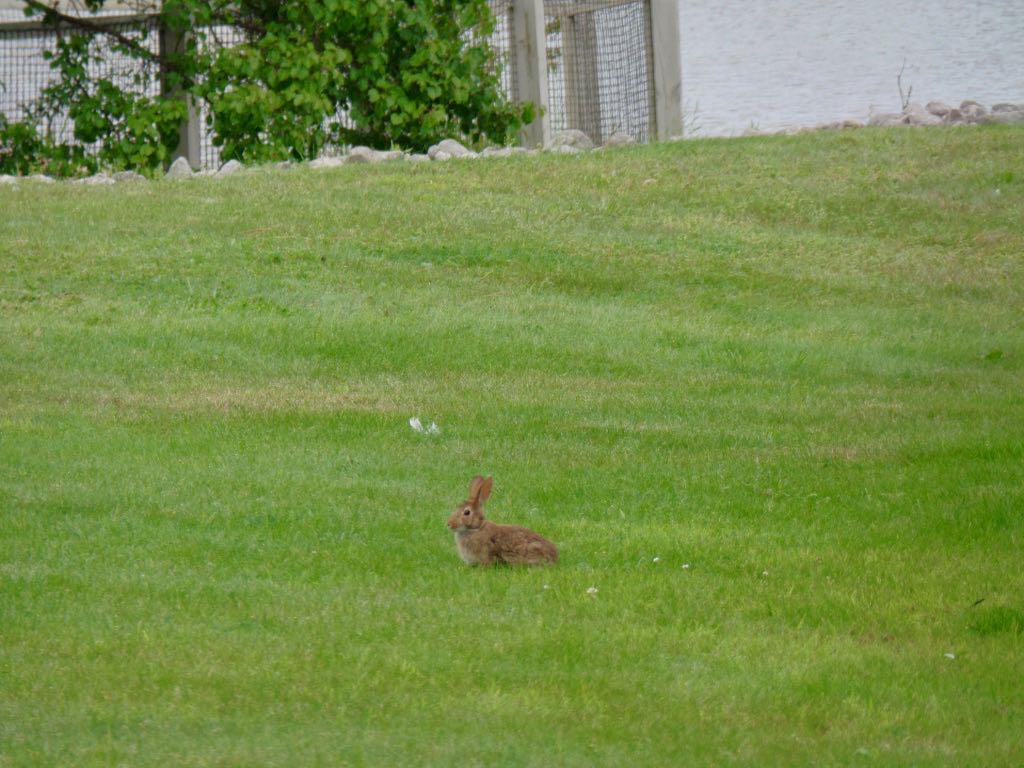 That first rabbit is still comfortable on the lawn, though.

Trivia: In the last week of World War I, the American Expeditionary Forces III Corps issued General Order Number 35, for handling shell-shocked privates: ``This soldier absented himself from his organization in time of battle or impending battle, with no apparent cause except fear. The foregoing is to be sent as a letter to the father, mother, or nearest relative of the soldier; copies will be sent to the postmaster and the mayor of his home town, and to his sweetheart, if she is kown. A copy is to be posted on the company street.'' Source: Eleventh Month, Eleventh Day, Eleventh Hour,Joseph E Persico.