My humor blog continues on in low-power mode. In this, much less exertion, way to write, there's been a lot of looking at Popeye cartoons and a surprisingly long essay about Mark Trail. If you missed it, here's your chance to fix that:

And now in my photo roll? It's time to look at a league night at Marvin's Marvelous Mechanical Museum. It's a miscellaneous bunch of things because at some point every picture of Marvin's is the same bundle of incomprehensible stuff. Tomorrow I'll have something different. 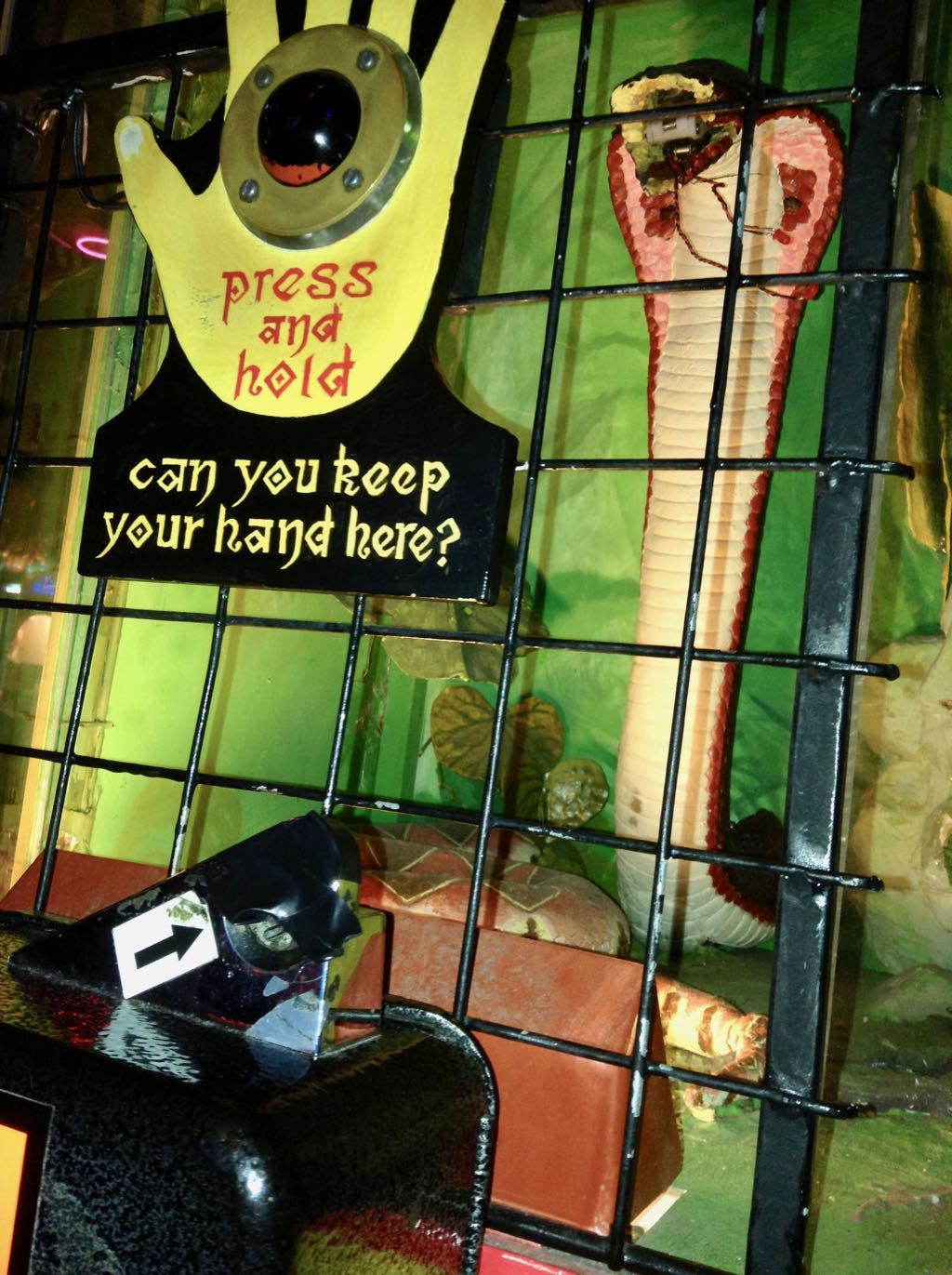 My traditional Marvin's test of the King Cobra striking cobra coin-op. Its snout has seen better days. I forget whether the striking mechanism was working. I think it must have not been working, as I didn't take a picture of it showing off that I had Nerves of Steel. 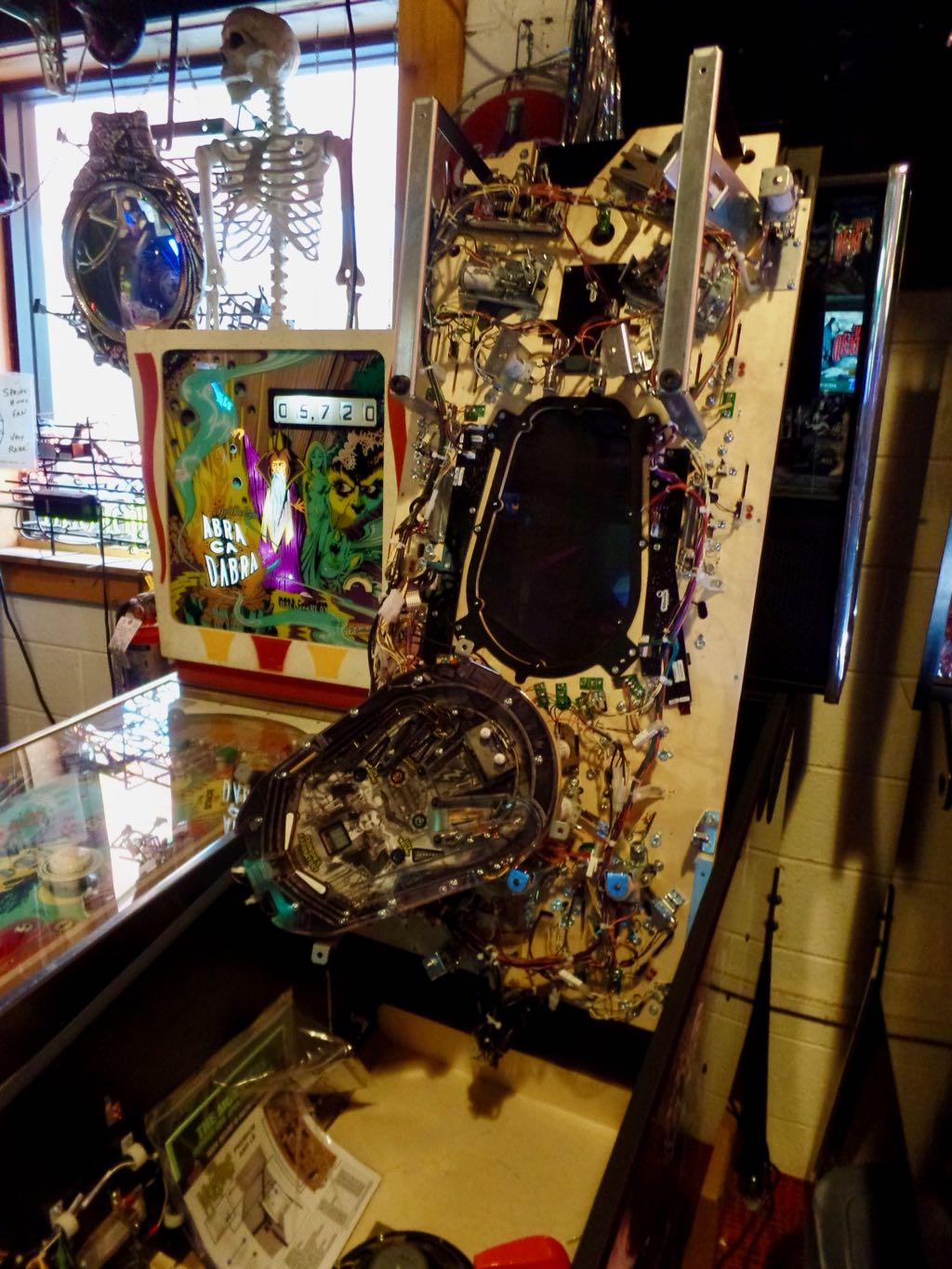 Repairs, before league night started, on the Munsters pinball machine. Note the secondary, miniature, pinball table hanging out from the middle of the playfield. 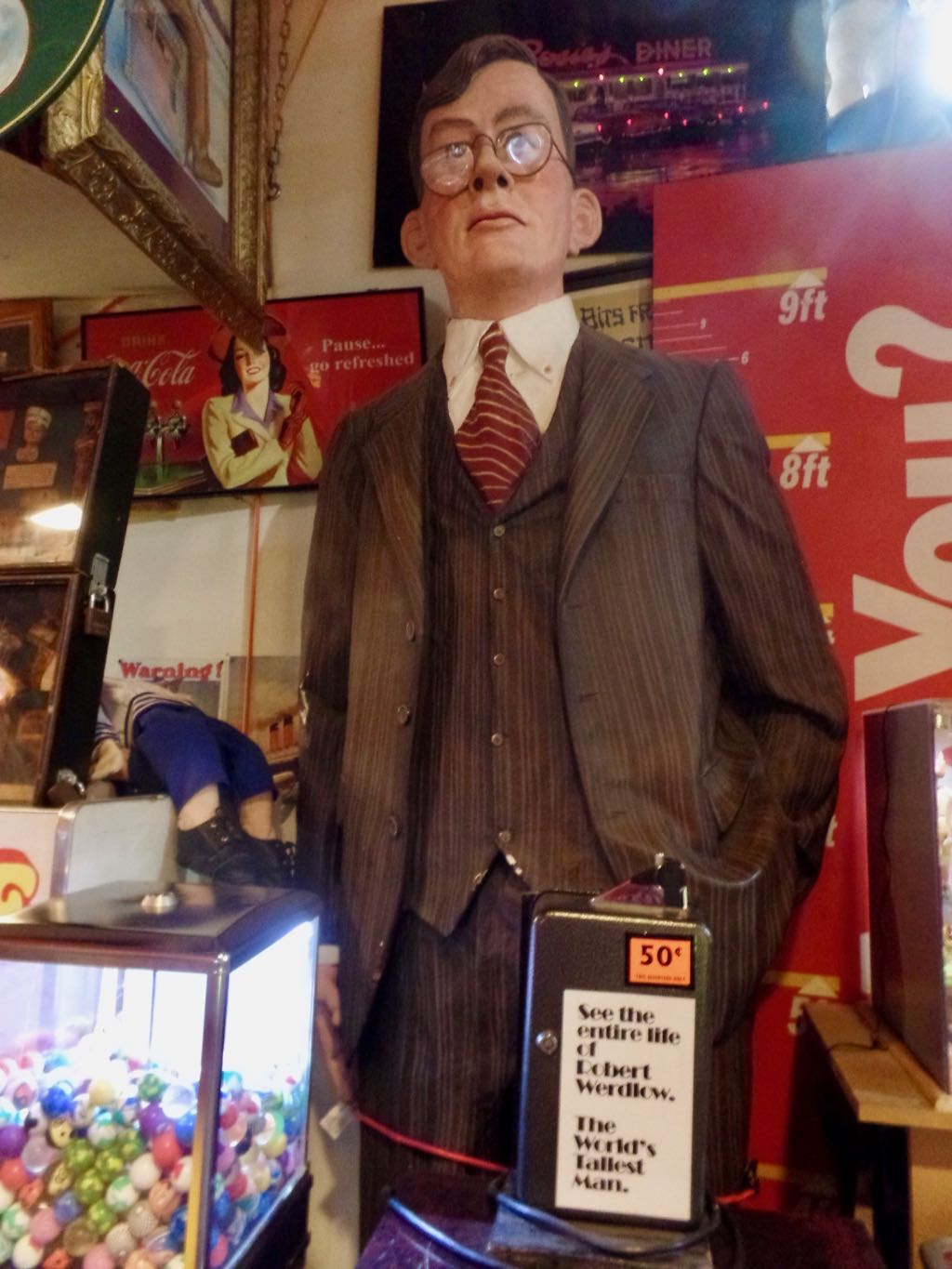 The machine offering the chance to see the life of Robert Werdlow, the world's tallest Steven Colbert. 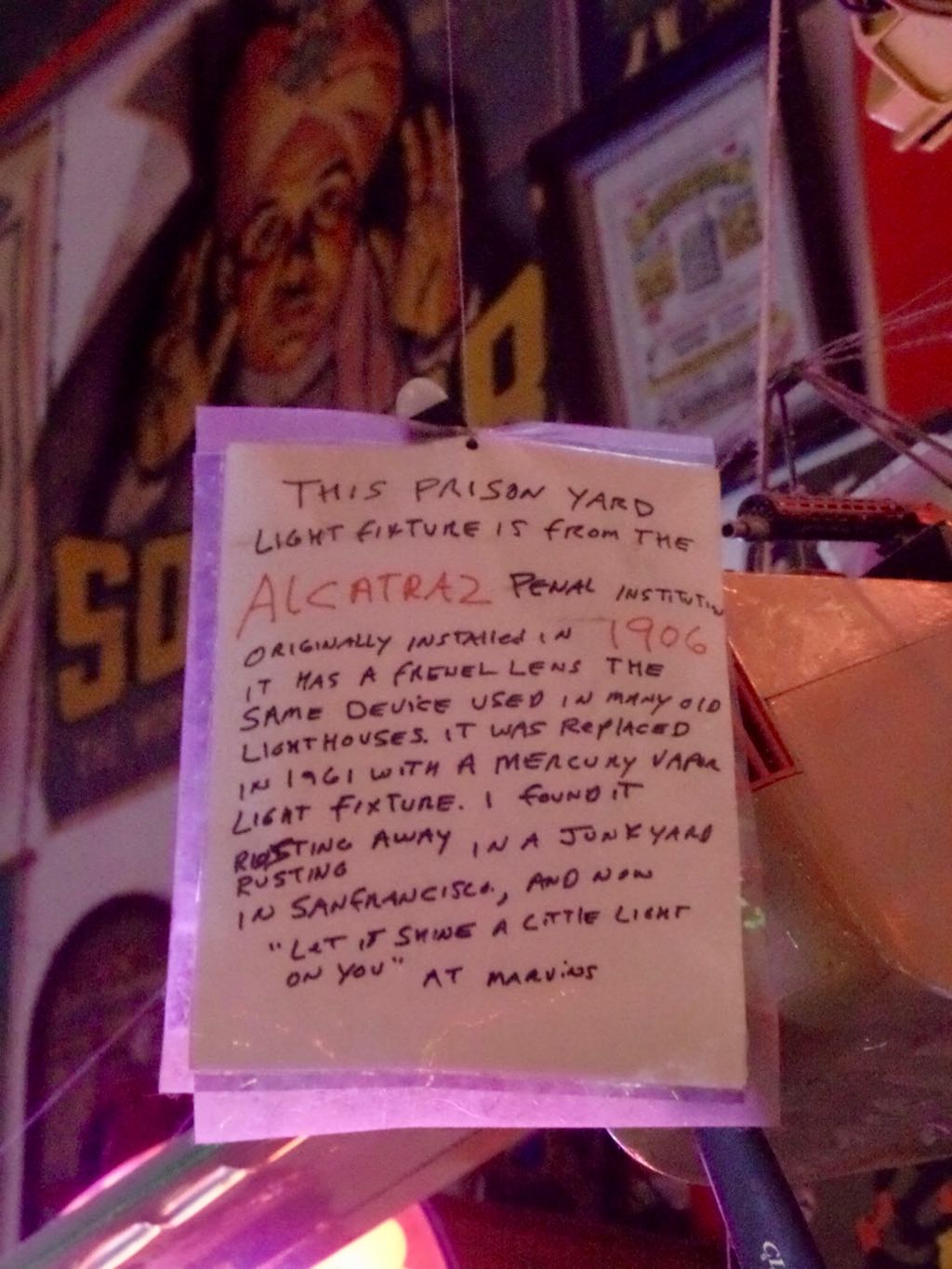 I don't think I had noticed before this declaration that they had a spotlight from Alcatraz. 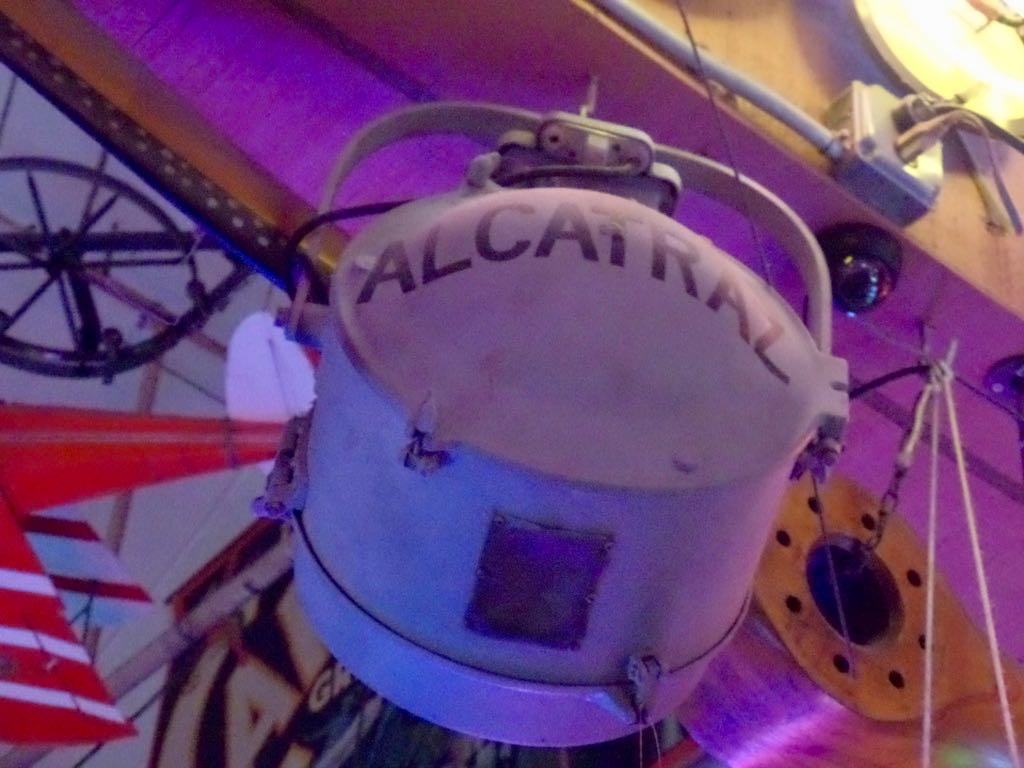 And there's the light, which clearly has to be from Alcatraz as it would be impossible for it to be labelled like this otherwise. 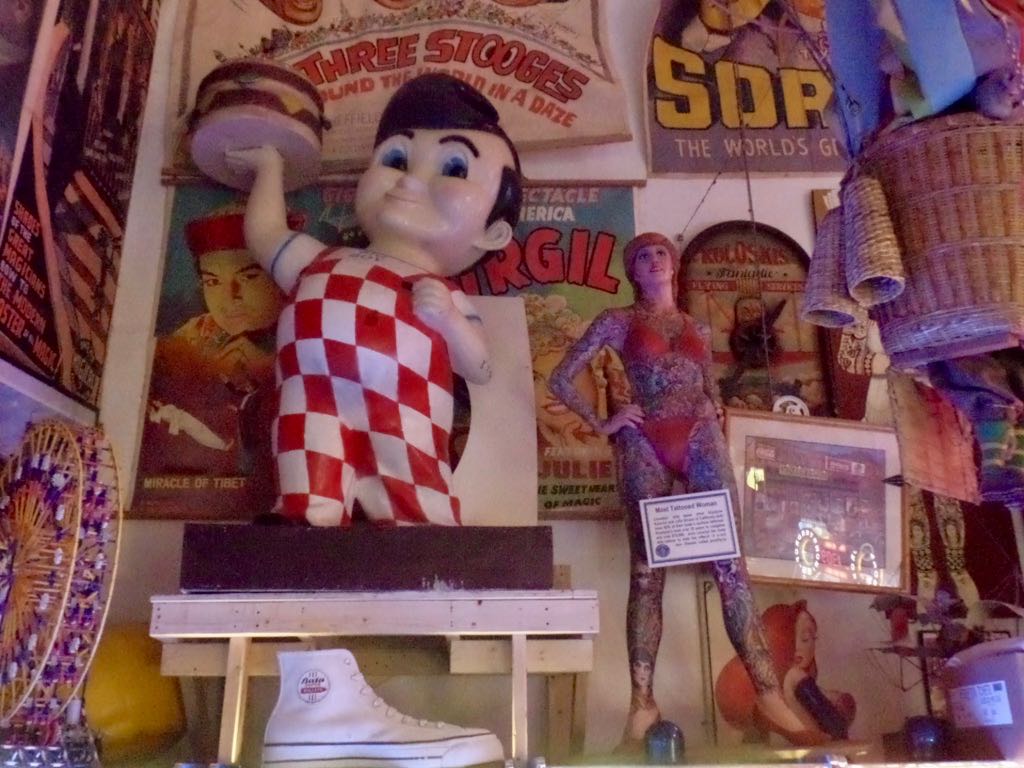 More Marvin's bric-a-brac. Notice also the poster for the Three Stooges ``Around The World In A Daze'', from 1963. 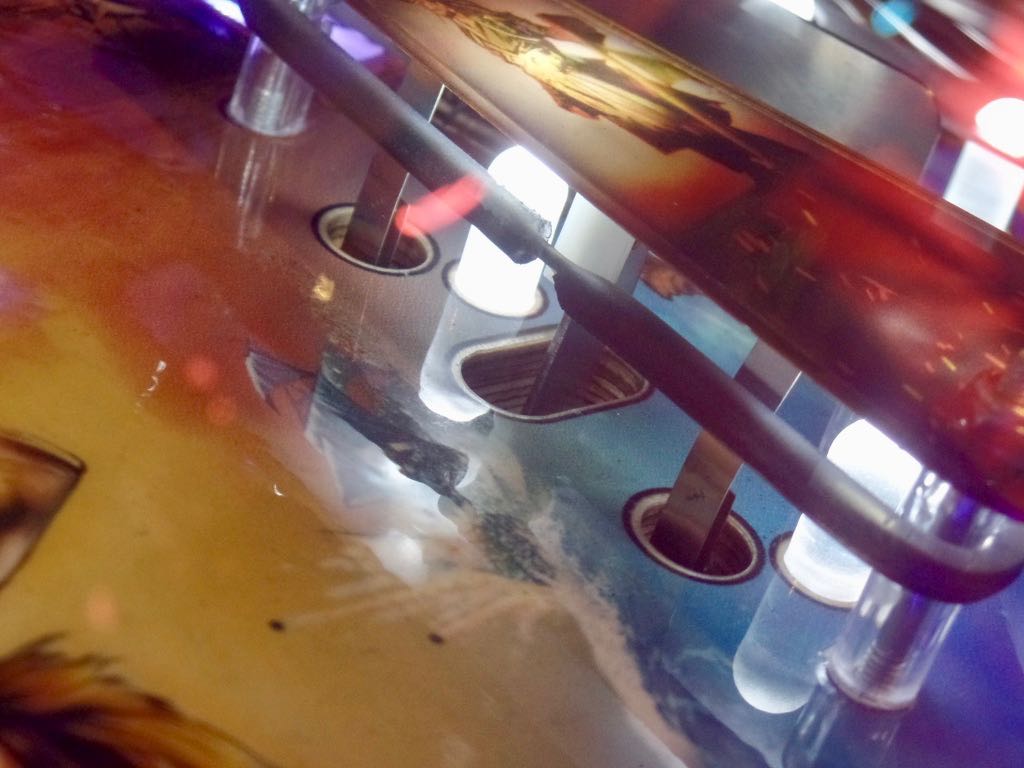 Looks like the rubber on that kicker is getting ready to snap. 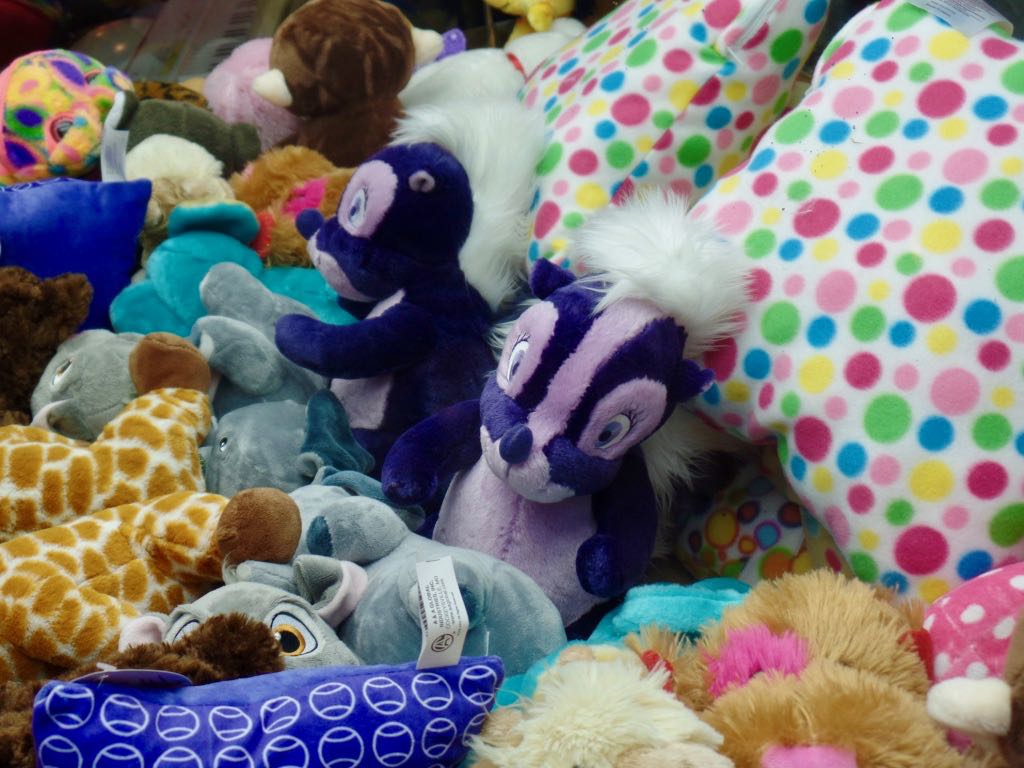 Some victims of plush skunk transformation await rescue from the claw machine. 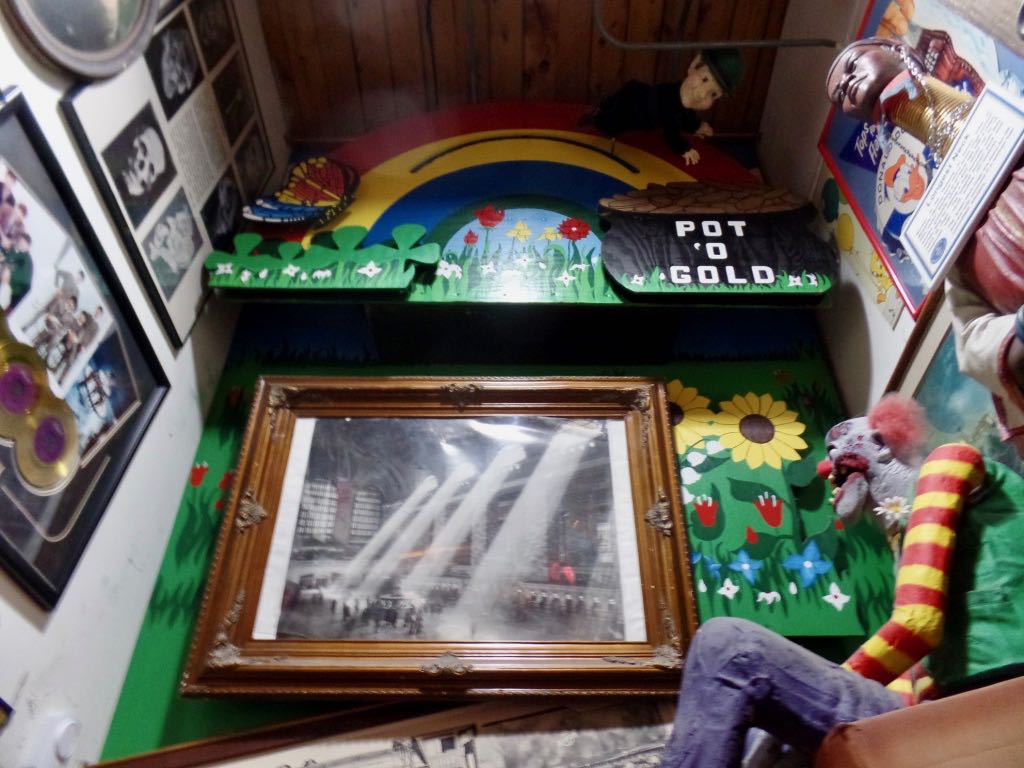 Looking up at the little corner off by the men's room. 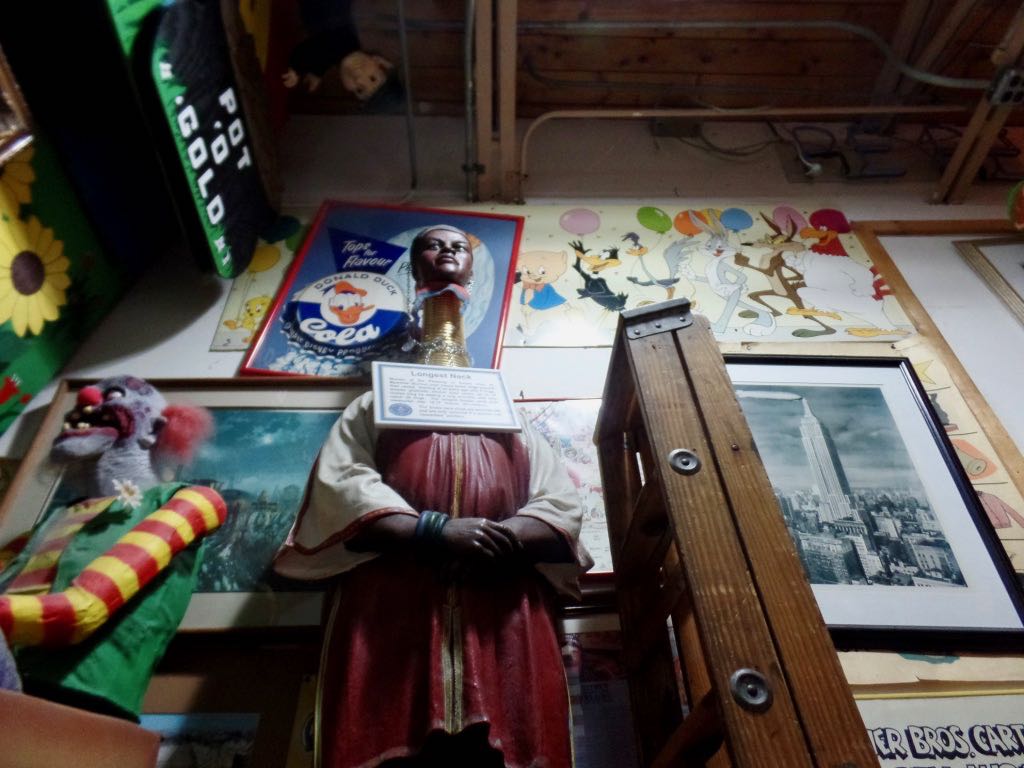 Another view of the corner by the men's room. I don't believe the ladder is an exhibit but, if Marvin had had a bit more time, it would have been. 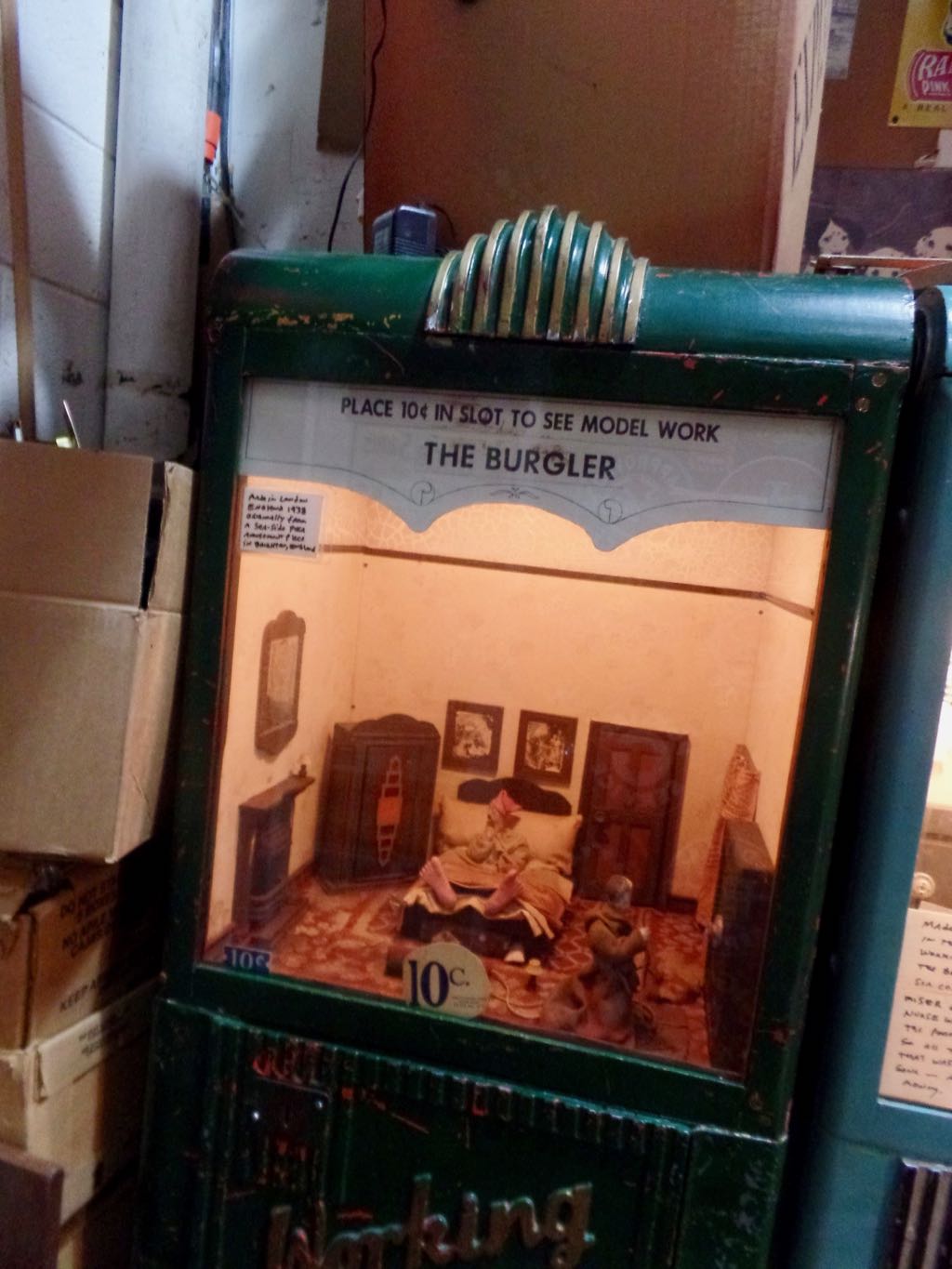 One of the older coin-op scenes. The sign says it was made in London in 1938, and it had been at a Brighton seaside pier. 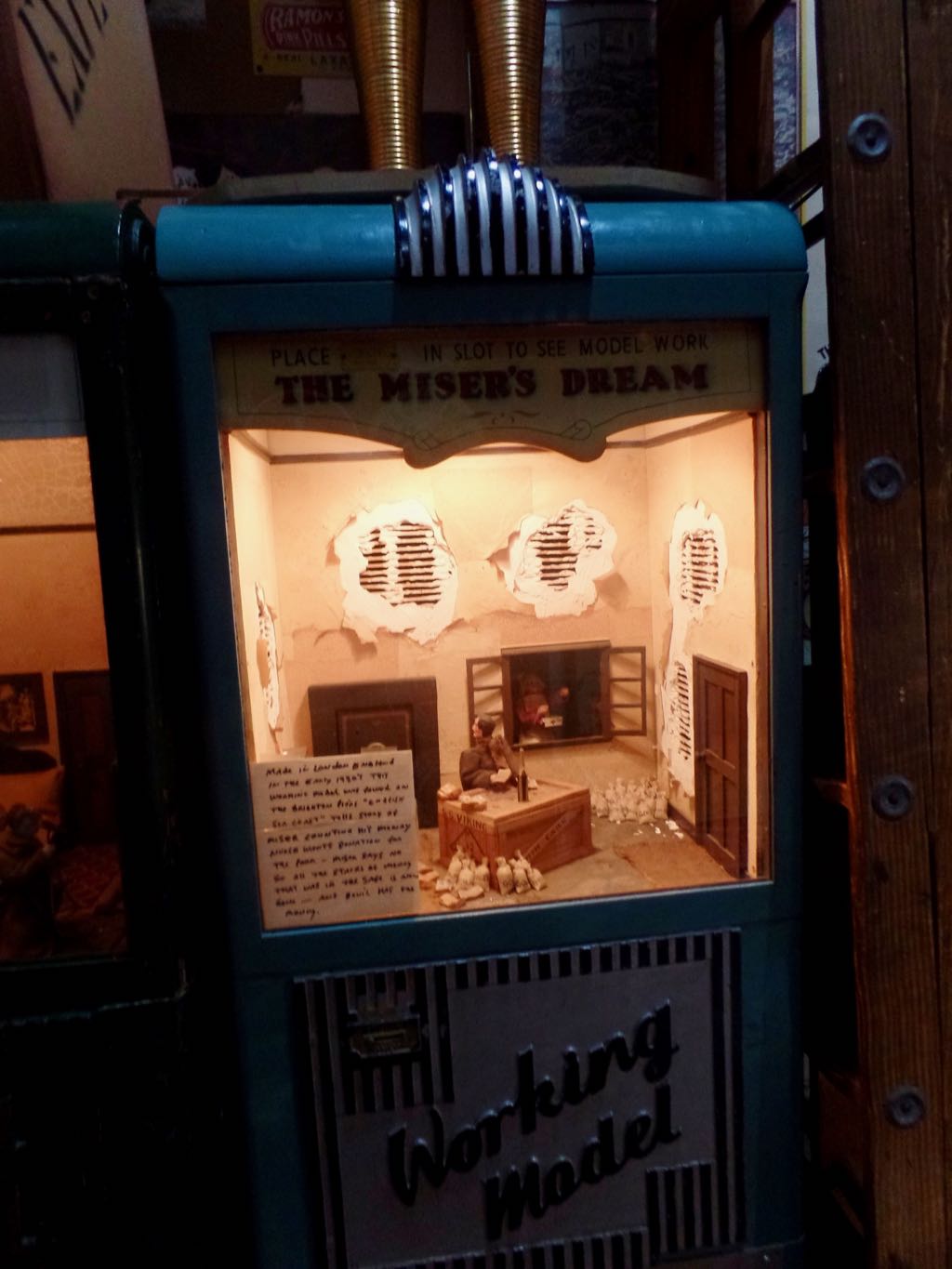 The Miser's Dream, another of those coin-op scenes. The sign says it was made in London in the early 30s, and had been at the Brighton Pier. 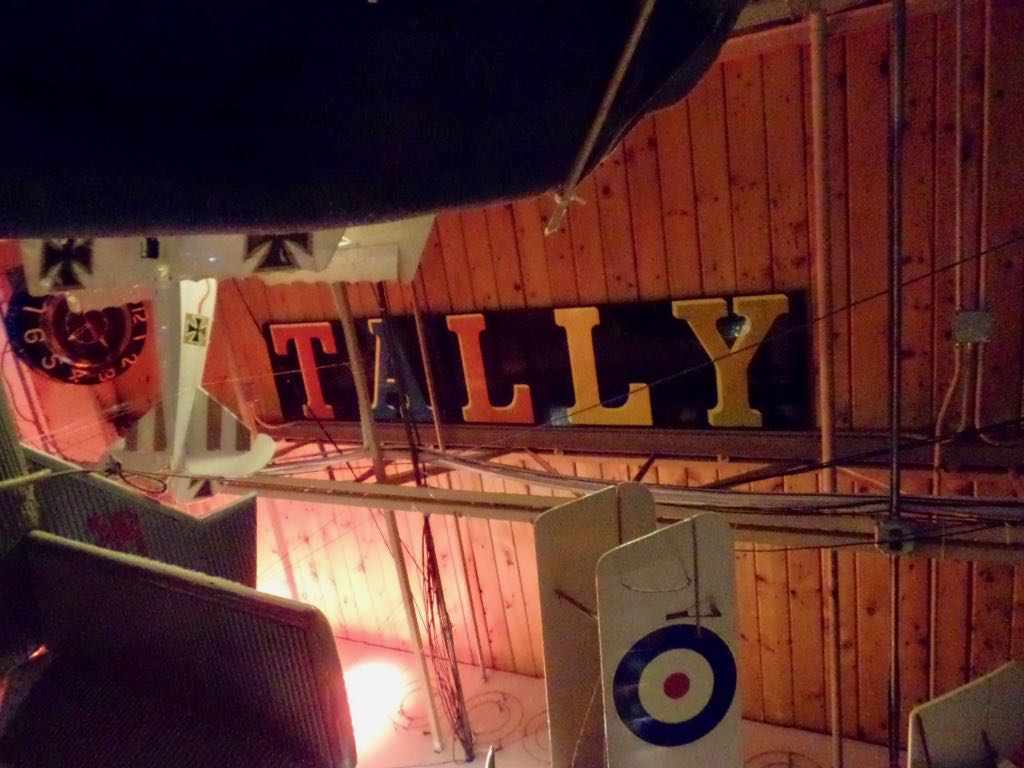 The mall that Marvin's in now is your normal sort of strip mall. But it used to be a proper enclosed mall, called Tally Hall, and look what's hanging from the ceiling: Tally ... 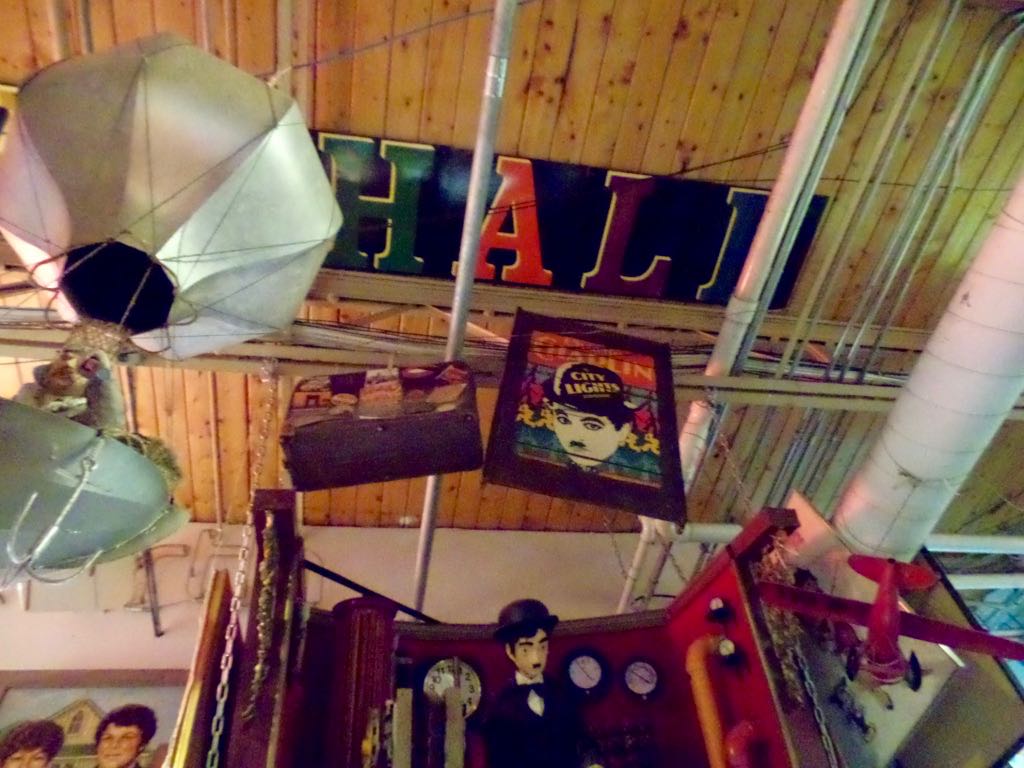 ... and Hall. There is a band named Tally Hall, although they're named for the sister mall in Ann Arbor which Wikipedia says was named for the one Marvin's was in, without citation. They do have a song about Marvin's, though.

Trivia: Though selenium is toxic in low doses, it can counter the effects of other metal toxins, particularly cadmium, mercury, arsenic, and thallium. Source: Nature's Building Blocks: An A-Z Guide to the Elements, John Emsley.