You will get a sentimental feeling when you hear

The Silver Bells, Home Edition, ended up being a pleasant enough two-hour block of TV. Not a patch on the actual parade it would have been madness to hold, but probably as good as we could hope for and a teaser for Thanksgiving's virtual parade thingies. There were a nice bunch of slightly-awkwardly-timed cuts to Santa Claus reading from letters, and local TV news people showing how to cook things (one of whom really acted a bit loopy, like she was exhausted after fourteen takes or something, and who kept pointing out how nobody actually measures all the ingredients into forty little bowls that they mix together like on cooking shows), and sing-a-longs.

Some of the sing-a-longs were from past Silver Bells parade guests or performers. Some were pretty well-paced things. Some were done far too slowly and demonstratively for anyone at home to sing along with.

bunny_hugger observed what you need for this is a strong (but not too fast) pace and a slightly square melody line. Something like Mitch Miller, where it's easier singing along than not. Also, they tried doing a follow-the-bouncing-ball bit, but whoever was in charge of the ball (actually a connected-eighth-notes) clearly did not understand the concept. The ball just streamed along, left to right, with little regard for what note the song was on. And then sometimes it jumped up, to no purpose. I don't set myself up as an expert on follow-the-bouncing-ball cartoons, but I've watched more of them than most people, and I know the grammar. The ball bounces between syllables. It slides when you elide one sound into another, or hold the note.

The show did end with the tree lighting. The state tree this year was from Metro Lansing (actually Delta township), the first time for that, and only the 11th time (of like 35) that it's been from the lower peninsula. The show said they hadn't been sure they'd get a tree this year, and were looking for ones as close as possible. I don't know why closeness was important other than that I guess the fewer municipalities have to provide traffic management the better. They were examining one tree that the owner had nominated, and noticed another tree in the area that looked better, and taller, and went over and asked. Turned out, the owners of that second tree had nominated it as a tree 14 years ago, when they first moved in and were intimidated by how big it was and how it towered over their home. (From the pictures, I understand their fear; it was like two and a half times the house's size and right up against it.) But back then the state examined it and said, basically, try us again in twenty years. So that's a nice, slightly weird, journey this tree took. When they lit it the topper was askew, just like after the 2016 storm that destroyed the parade. (And an incident not acknowledged or even alluded to in two hours of talk about Silver Bells and its history). It was windy Thursday. It's since been fixed.

They finished the show with fireworks over the capitol, and we did not realize there would be fireworks. Also we were surprised they'd do something that could encourage people to congregate and watch thing. But we opened our door and couldn't hear anything, and the fireworks lasted for just a minute or two. We think they just showed past years' fireworks. But they had set it up the whole show as if they were going to show, you know, new fireworks. I have no idea what that was all about.

It's better than nothing, and we spent the show drinking maybe too much hot chocolate with very aged marshmallows, but it would've been better were the pandemic handled by responsible people instead.

To our extra, September 2019, visit to Cedar Point and Halloweekends! There is no Halloweekends content in this photo dump. Funny how life works, isn't it? 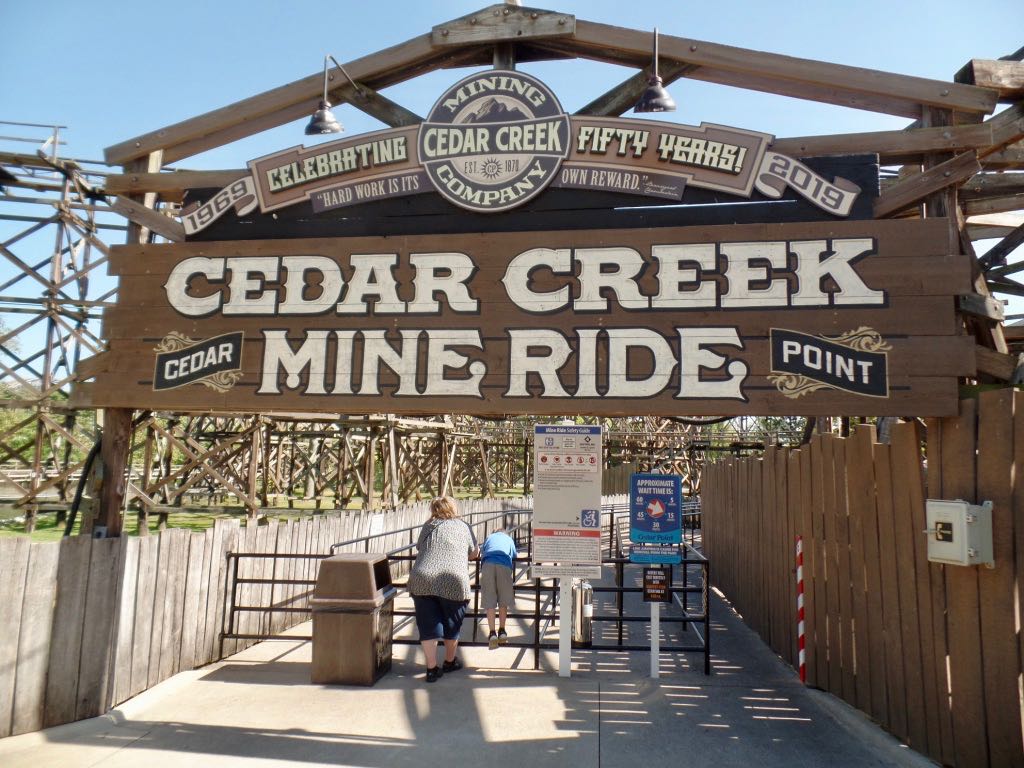 2019 was Cedar Creek Mine Ride's 50th anniversary and it got this new sign, tying it more closely to the Frontiertown Cinematic Universe that, like, Steel Vengeance is all about. Note the motto, as delivered by someone who if he existed would be under-paying you for your considerable hard work. 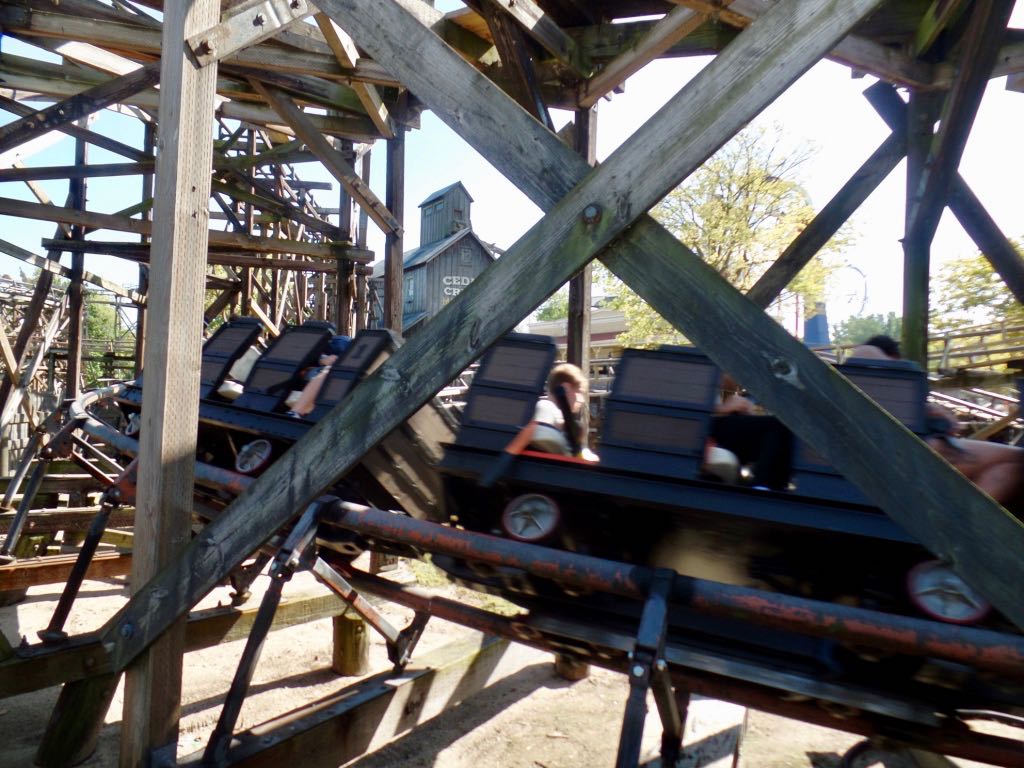 Mine Ride trains making a loop as close as it gets to the entrance queue. 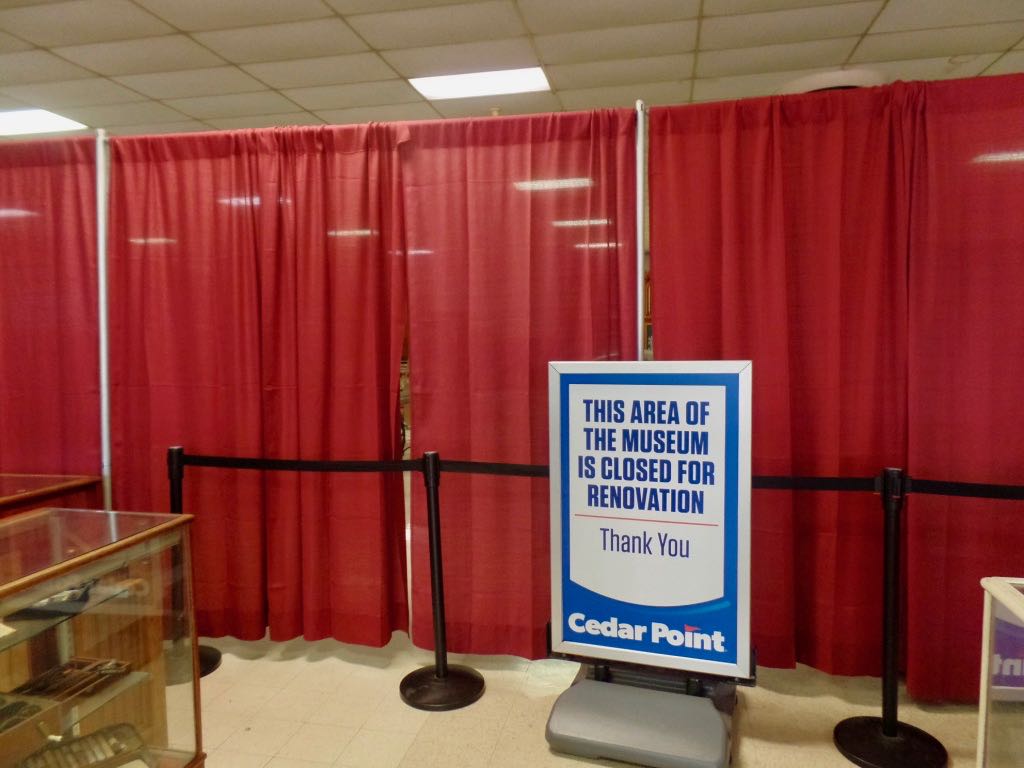 The Town Hall Museum! We were aware that they were renovating the museum and changing it for 2020, so we hoped to get a last look for the museum as it was, and found we were too late. All but the very front was roped off like this. 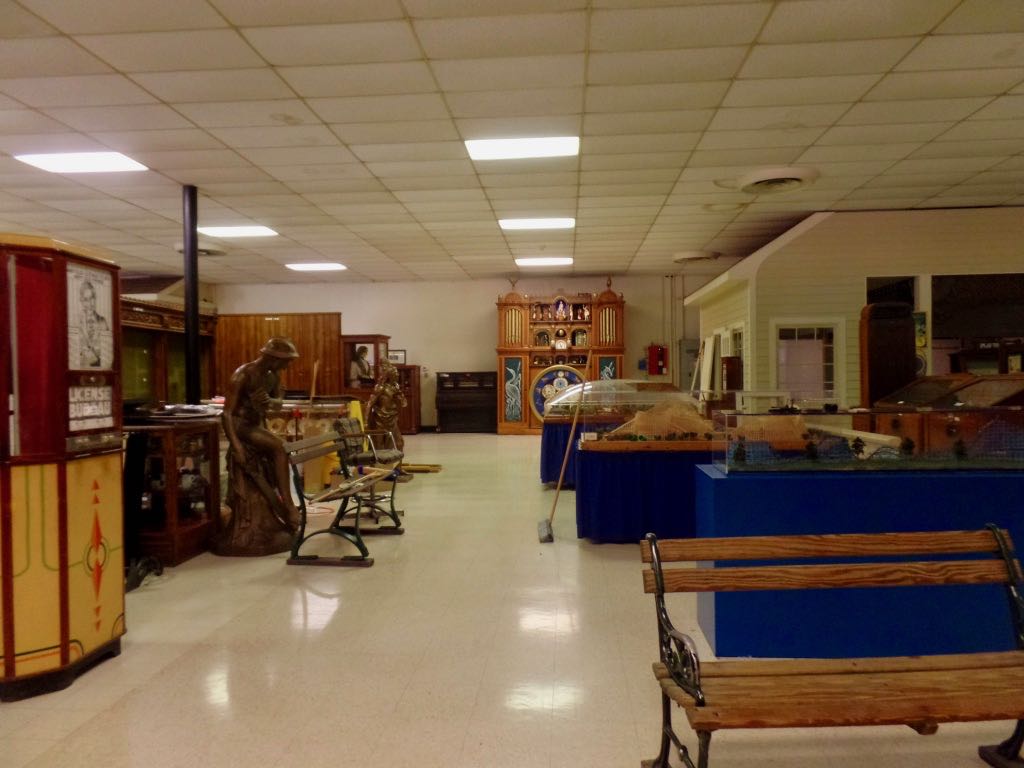 I poked my camera past the partitions, though, and the park worker at the front of the museum seemed not to care. Exhibits from the museum are piled up in different heaps but some pieces are where they had always been, including that elaborate clock that hasn't run in decades. 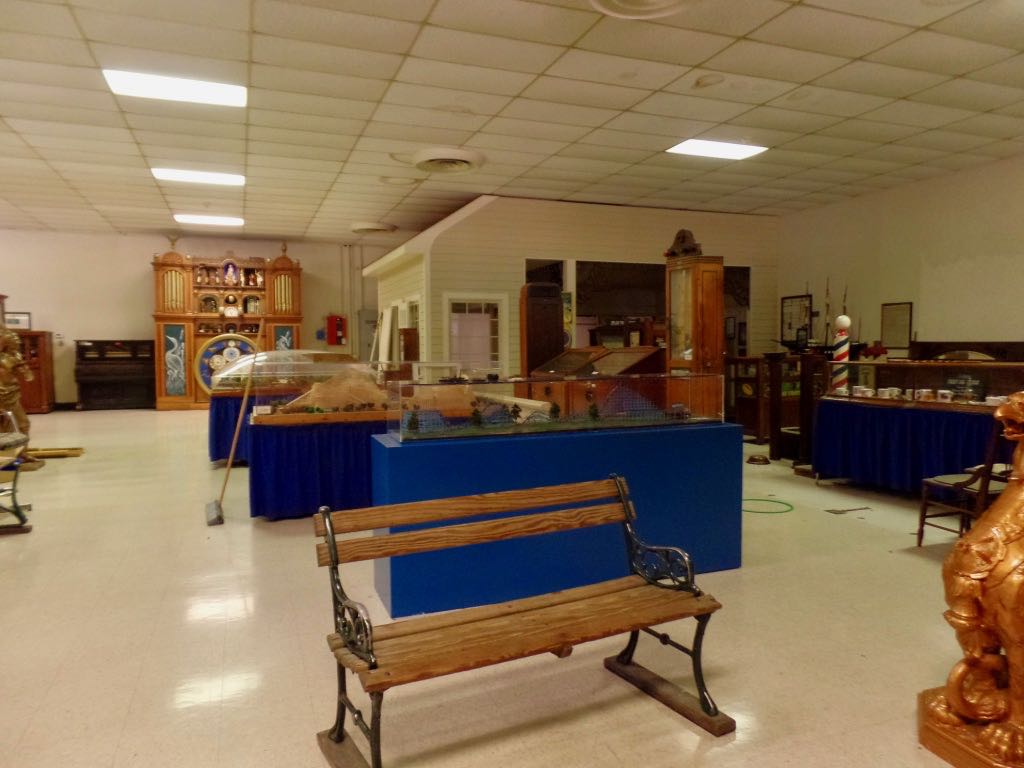 In the far background the clock that doesn't run; nearer, models of the log flume, Mean Streak, and Blue Streak. The room at the distant right had been one that showed a continuous-loop film of the history of Cedar Point. The statue of Mercury that used to be at the Marina entrance was finally moved into the Town Hall Museum, and I don't know where he's gone from there. The Fortune-telling machine has been moved away from its wall perch. 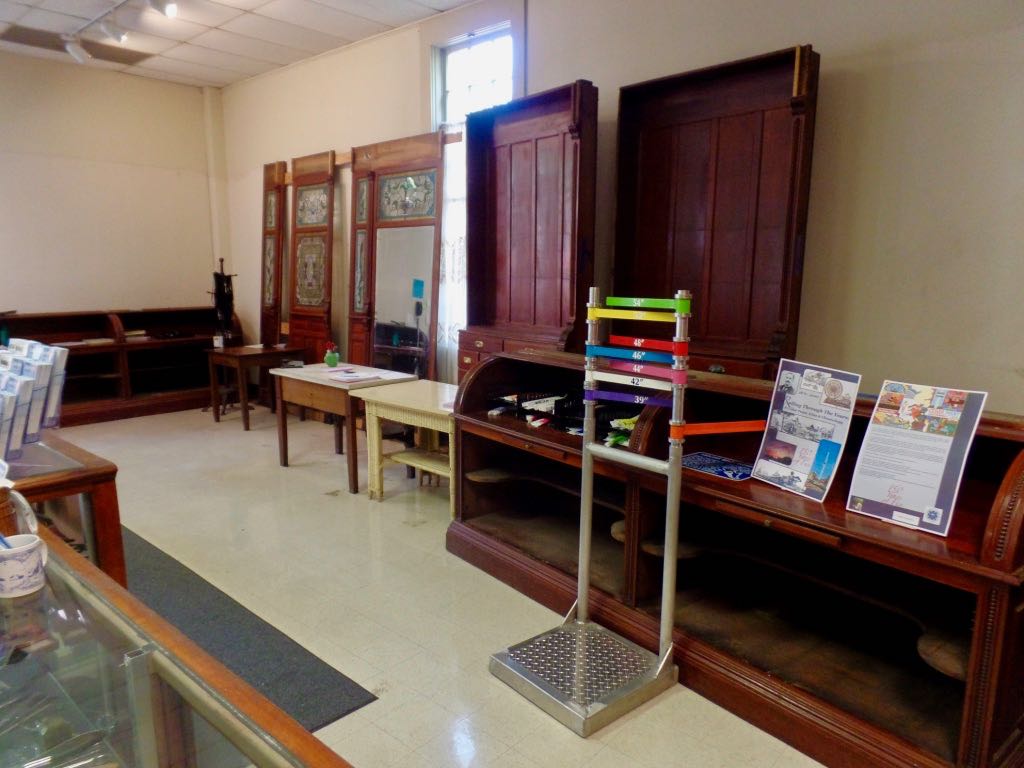 Up front. The Town Hall Museum had the full contents of some early-20th-century pharmacists that they'd bought in the late 60s because ??? ?? ?????? ???? ????????? ???? ?? ? ???????? ? ???? and here they're being disassembled for sale to whoever collects early-20th-century pharmacists stuff. The height measurement thing is because Town Hall is one of the places you can go to get your kid Certified as tall enough for certain rides and put on a wristband that saves ride operators from having to measure themselves. 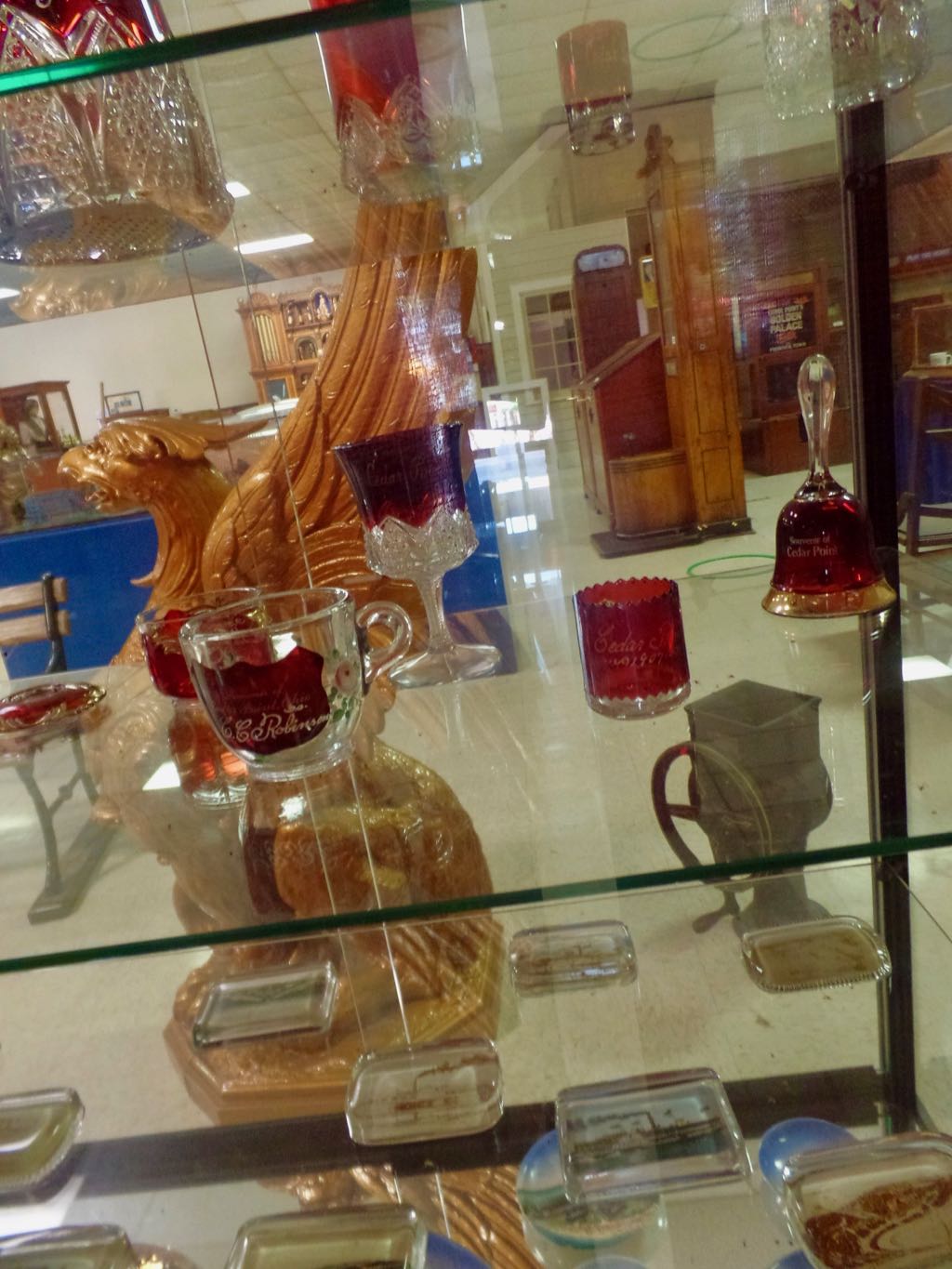 View of the Iron Dragon gryphon, painted gold, and some Cedar Point souvenirs, seen through the partition wall. 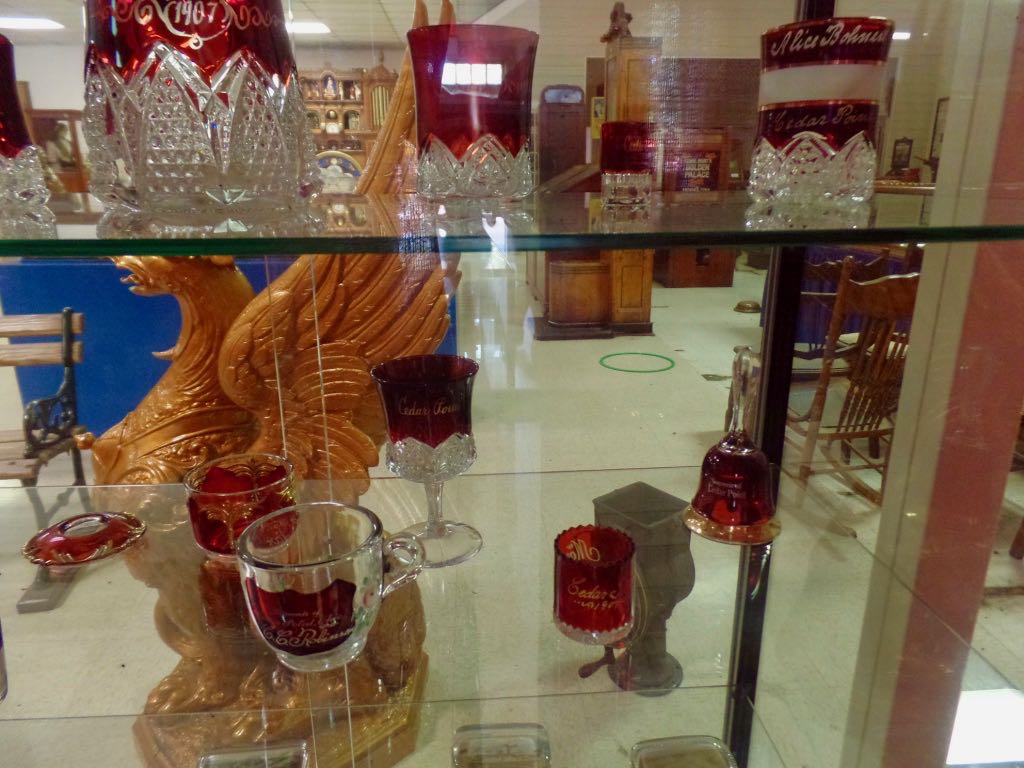 Slightly better zoom view of a lot of glass ornaments they've had on display forever. More of those old glass souvenirs. 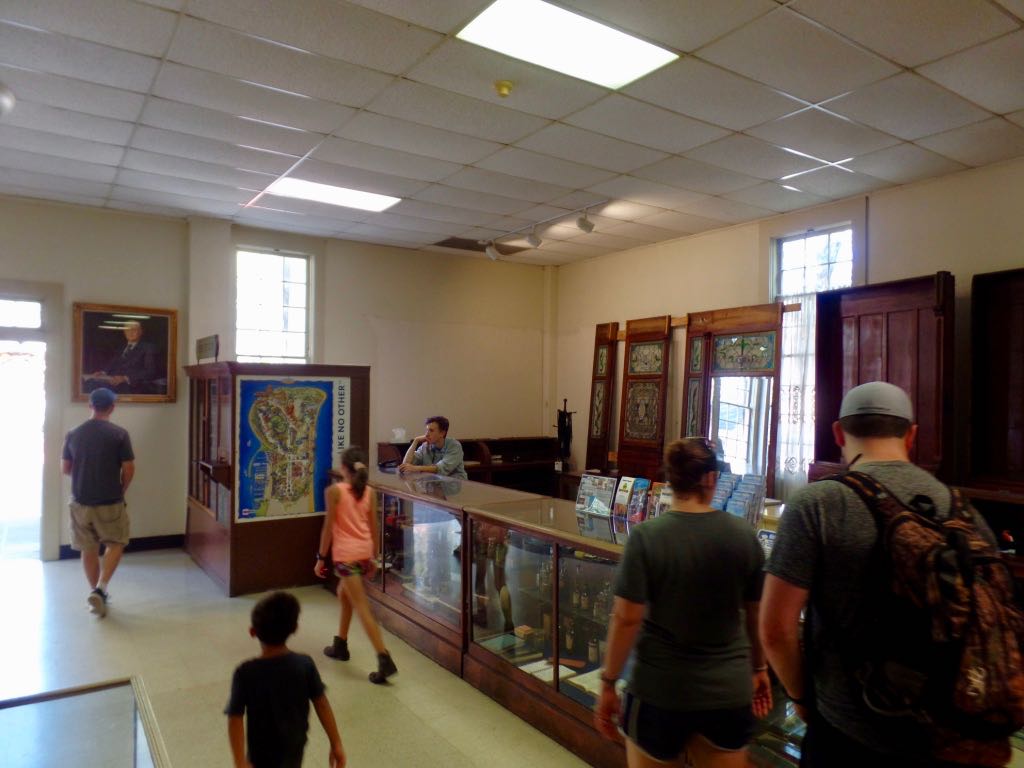 The area up front. And about all of the Town Hall Museum that was still open to public viewing. 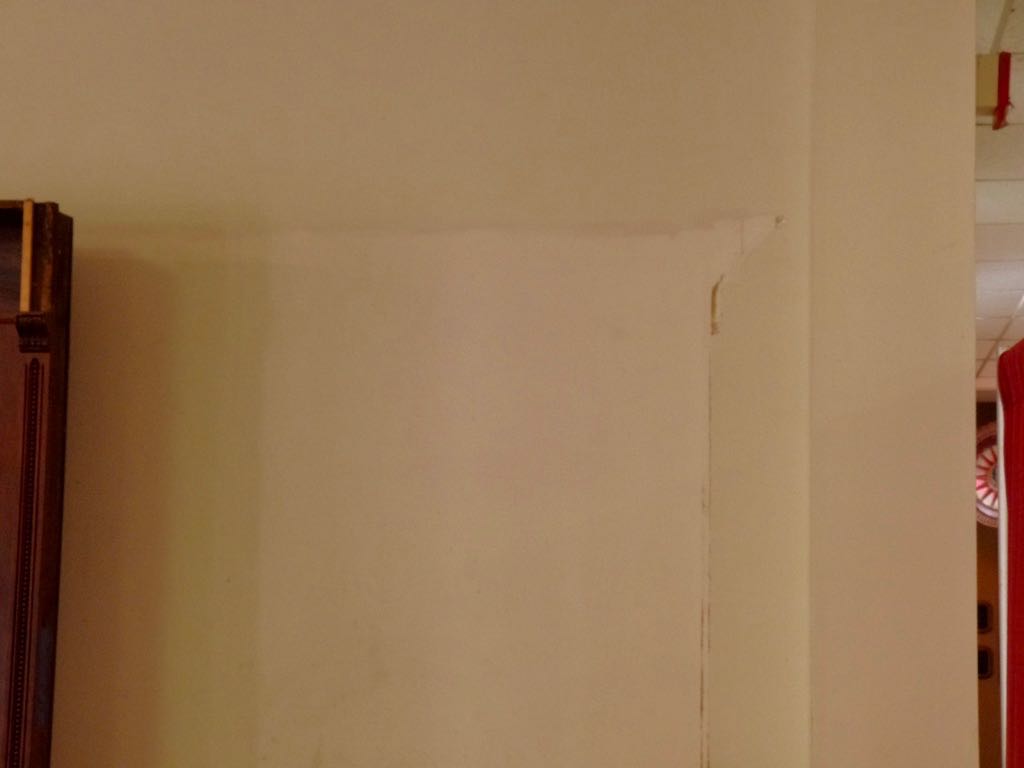 Historical ghost, as the area where one of the pharmacy cabinets had been saved part of the wall from fading.

Trivia: In 1952 New York City banned all vehicles except those going to the pier from 12th Avenue, the waterfront street in midtown Manhattan. Source: The Box: How the Shipping Container Made the World Smaller and the World Economy Bigger, Marc Levinson.

Currently Reading: The Partnership: A History of the Apollo-Soyuz Test Project, Edward Clinton Ezell, Linda Neuman Ezell. NASA SP-4209. I've read this before, but forgot the time Tom Stafford snuck a suitcase full of fireworks in to Moscow to shoot off on the 4th of July, and after the cops came around to ask who was shooting bottle rockets over their heads he explained it as ``it's our Revolution'' and they understood.