I had another video-chat get-together with my parents and siblings for Thanksgiving. This was about 6 pm, a time when

bunny_hugger was getting our own dinner organized and I assume everyone else had eaten dinner? Maybe was between dinner and dessert? This was also, by request, my chance to take my laptop downstairs and show off the goldfish tanks, and bring it over to show off our pet rabbit and try to show off our mouse. Fezziwig was hiding inside his Brutalist home, though, and the light bad enough my family couldn't even see that.

Everyone seems to be doing well, though, and the various niblings were as hyperactive and talky as they'd been for my parents' anniversary last month. Also as prone to leaving their iPad cameras pointing at spinning ceiling fans. I don't know what's going on there. It's good seeing everyone, though, and we have vague plans to do it again for Christmas.

We spent our own Thanksgiving alone, not going to her parents' as we couldn't quarantine for it. This was

bunny_hugger's smallest Thanksgiving of her life; I suppose, her parents' smallest Thanksgiving since 1973 at latest, too. (I have all those Singapore Thanksgivings where it wasn't even a holiday.) We did cut way down on the number of things made, and between that and making for just two people, the holiday cooking was a lot less stressful.

Dessert was a pumpkin cheesecake that

bunny_hugger's mother had made and brought over Wednesday (she needed to come to town for a medical appointment, but did not stay at all; she didn't even set foot in the house.

bunny_hugger gave a bunch of slow-cooker-made onions in return) and that we quite liked. Her mother, sad to say, didn't like it, although she did like it more as a leftover. It's a shame she went to all that work --- apparently she made as big a Thanksgiving dinner as she would when it was the four of us together --- for a disappointing conclusion.

We built a fire in the evening, to watch along with the Detroit parade (a mix of footage from the last couple years, a few performers somewhere on Woodward Street in Detroit, and floats going past an empty field near a gas station somewhere on Earth, all at different times and assembled into some order). In a disappointing move, lighting the fire alarmed our poor rabbit Sunshine again and she fled, after thumping in disapproval, to the most distant part of her hutch. We don't know what her trouble with the fireplace is, and had thought she'd grown to accept it more by the end of last year. We'd think this phobia could be worn off by exposure, but that does mean putting her to this thing that she fears so a lot more over the winter.

Fezziwig, our mouse, we gave treats to twice in the morning and he spent much of the day checking the wire window of his cage just in case we'd give him another.

Back now to photographing Cedar Point during Halloweekends, the next-to-last weekend in October 2019. 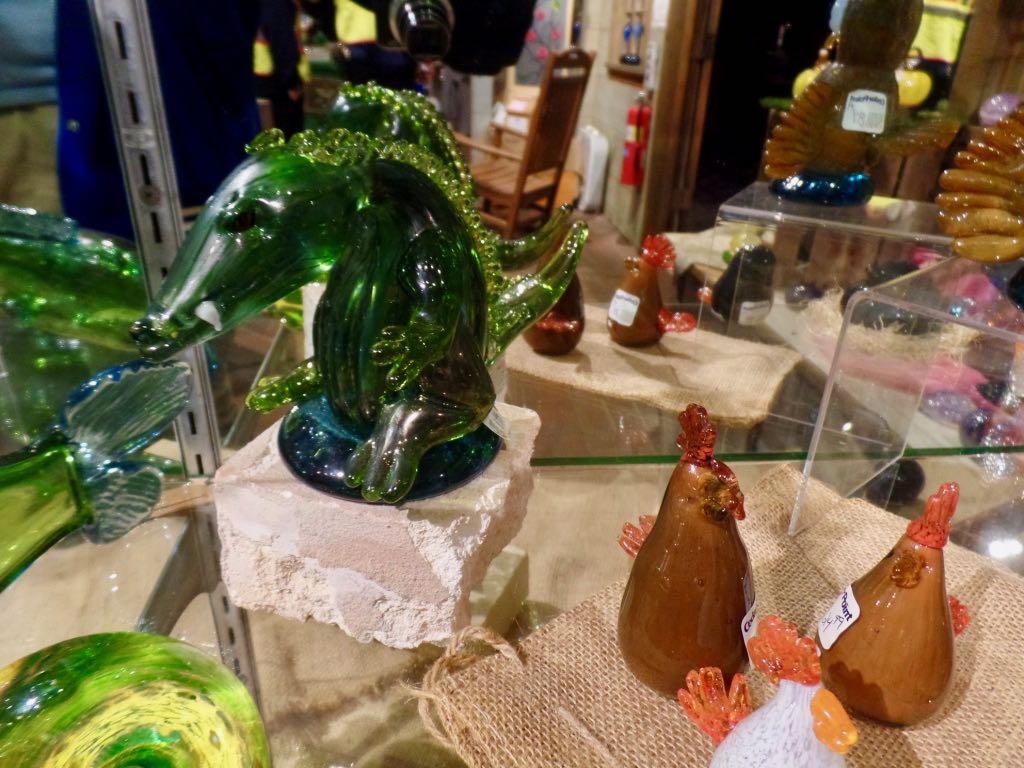 Tubby glass dragon in the Frontier Trail's glassworks. They've been doing glass-blowing, thanks to a hipster company in southeast Michigan that offers classes, and sell some of their wares at prices that just terrify us to consider. 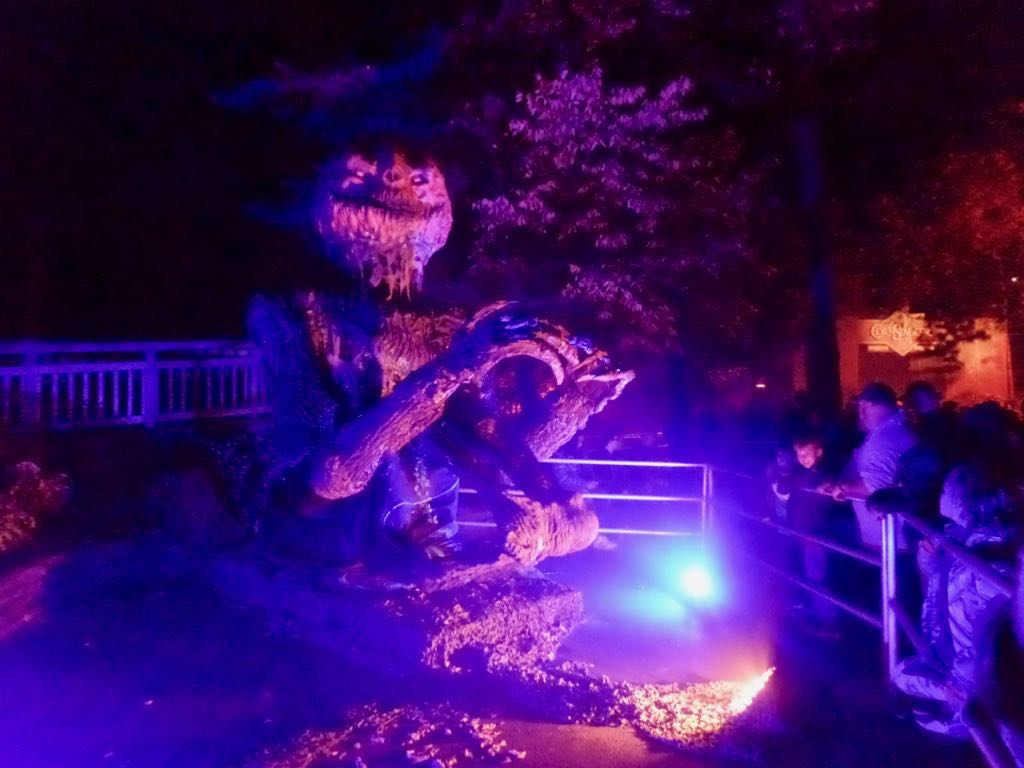 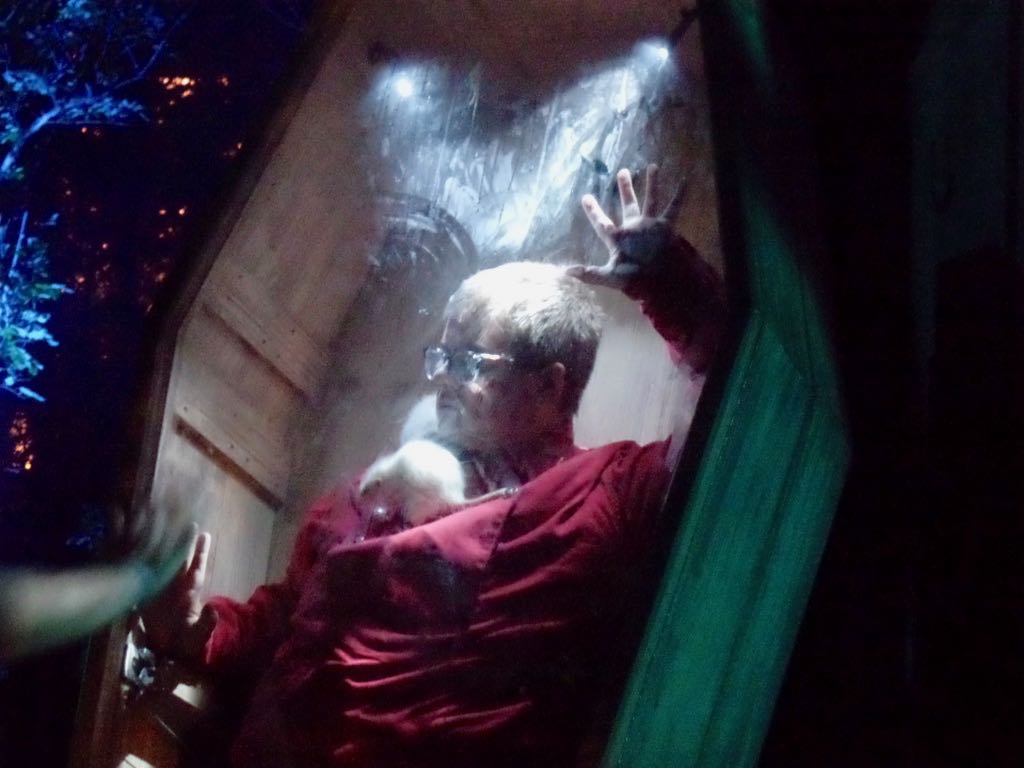 A new feature for 2019, a man trapped in a coffin with rats crawling over him. 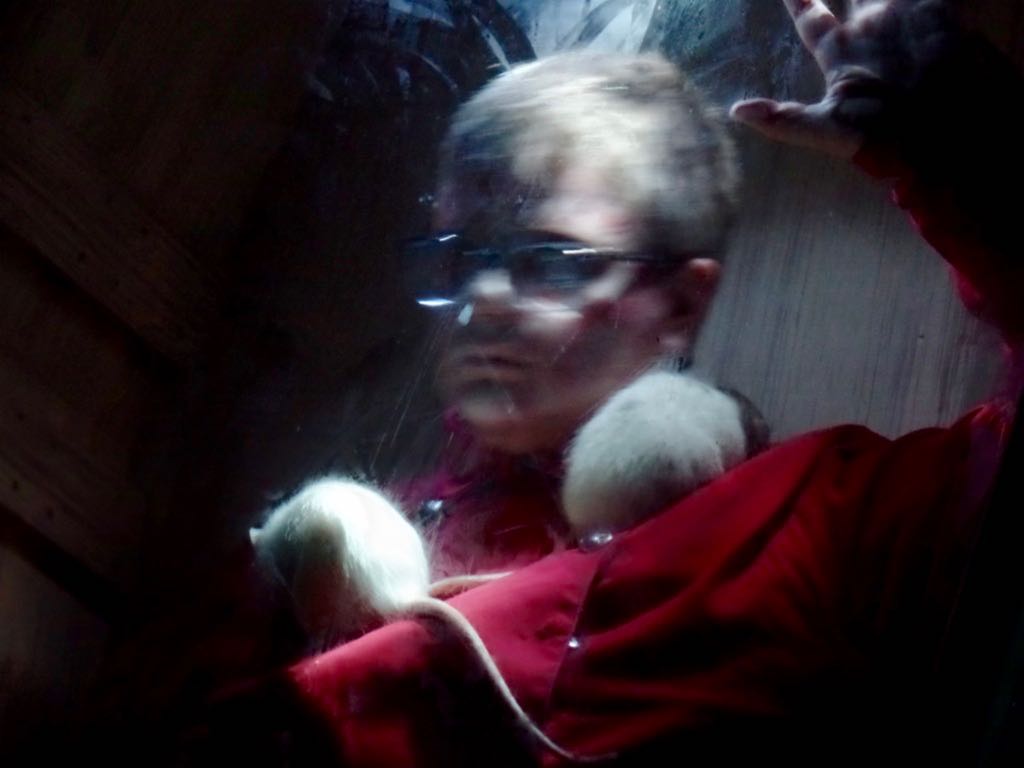 The horror of the rats is diminished by how they're a bunch of adorable dumbo rats who want nothing more than to be your friend. 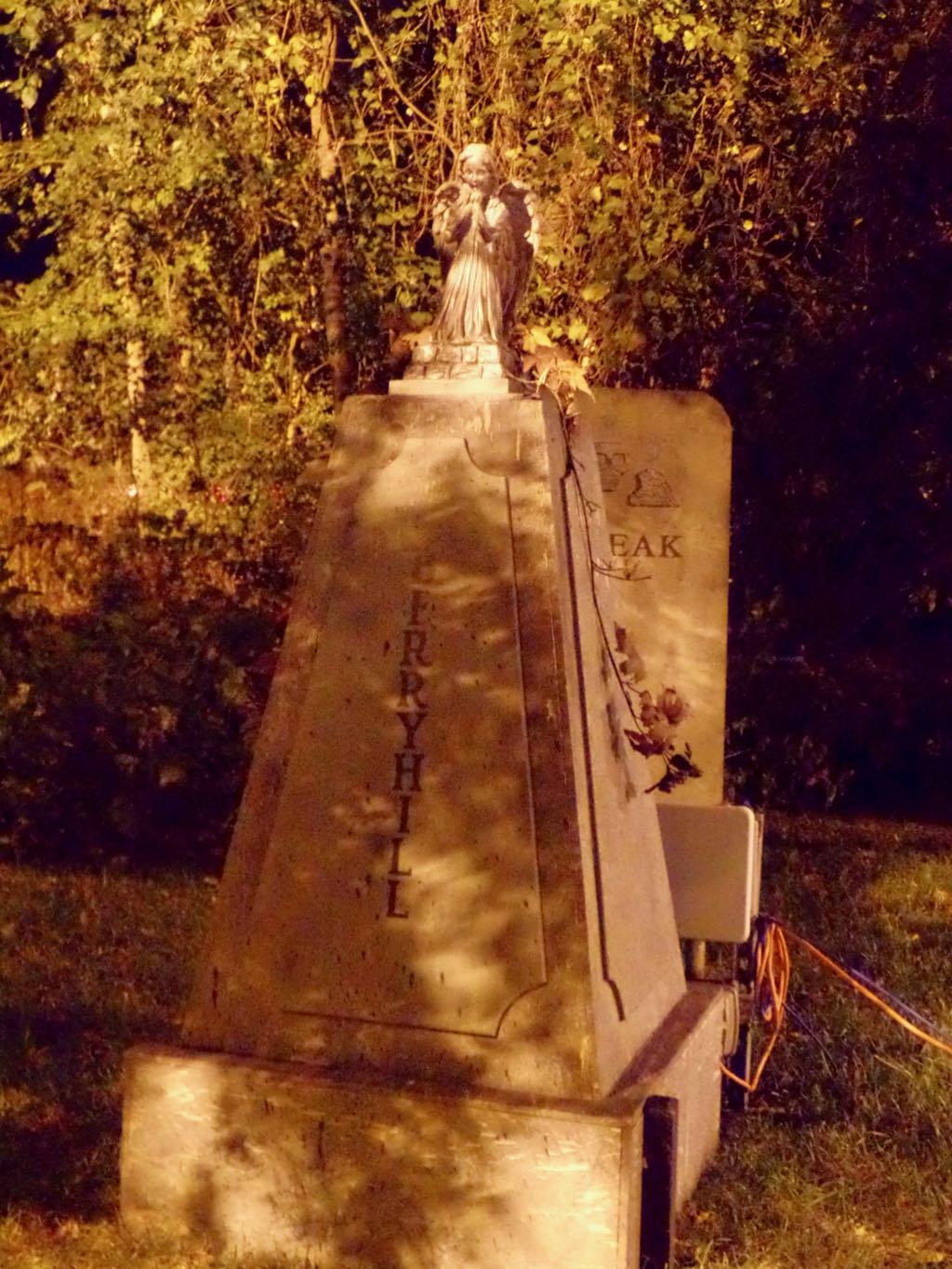 One of the gravestone decorations for the season. 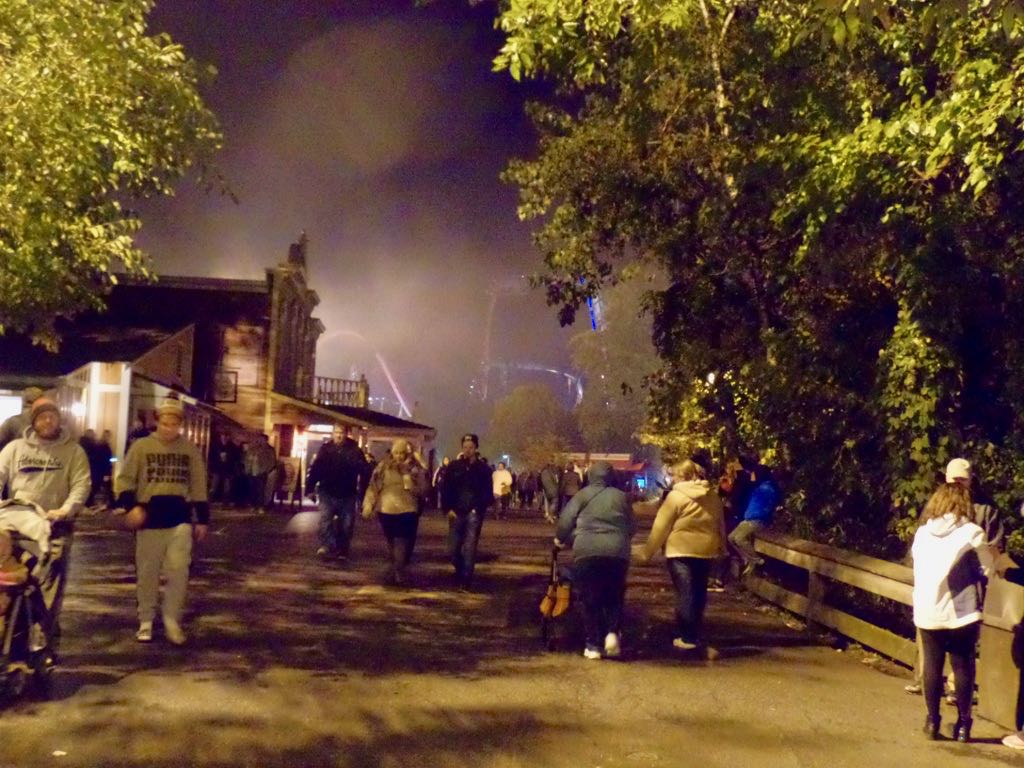 The southern end of the Frontier Trail, where it dissolves into an atmospheric fog. ValRavn is the roller coaster in the background.

Trivia: No boats passed along the Delaware and Raritan Canal, connecting Bordentown and New Brunswick, in 1933; in 1934 control of the canal was returned from the Pennsylvania Rail Road to the State of New Jersey. Source: New Jersey: America's Main Road, John T Cunningham.

Currently Reading: Barney Google and Snuffy Smith: 75 Years of an American Legend, Brian Walker. OK, there have been a lot of jaw-dropping moments in this but here's my biggest drop: Fred Lasswell designed a computer version of his lettering in the late 80s. It doesn't quite say when Barney Google started being computer-lettered but it can't have been later than 1992-93, when this book would have been in preparation, and hah?