A point is all that you can score

If things were normal yesterday would probably have been the last Marvin's League meeting of the year. I bet they'd have had pizza, leaving the question of whether to fill up on that or get White Castle on the way home. Today, I bet, would have been Fremont's November tournaments. They're normally the last Saturday of the month, but the Thanksgiving holiday scrambles things. Grand Rapids Pinball League would have wrapped its season up on Wednesday, and I might have played in it.

bunny_hugger would not, because her classes wouldn't allow.

I don't know how we'd have finished. I had resolved this year I wouldn't fret, or stress, about my position, and try to focus on just enjoying myself while playing.

bunny_hugger had a similar resolve. But these kinds of resolutions crumble when you're very near the cutoff for invitation to the State Championship Series. I can imagine

bunny_hugger and I squabbling about our relative positions; if I was even one slot higher than her, I'd have to point out it amounts to I had one good finish, in July, that made the difference. (Granting that our track record suggests it likely I'd be several slots higher.) Or that I got to a couple of Grand Rapids Pinball League events she didn't and one of them counted as among my top-twenty events of the year. There'd be a lot of comparing our individual finishes, event to event, and a lot of numbers since Fremont was adding the number of tournaments each month; we'd have had 34 data points from that venue alone. Plus she'd have probably finished in B at Pinburgh again, while I might make C at best.

The International Flipper Pinball Association declared the 2020 season closed, and that no state or national playoffs will happen. The points earned through the middle of March won't be applied to the 2021 season, if and whenever that starts, although the IFPA excise taken from the tournaments --- one dollar per player per event --- will. Same with the Women's World Championship.

bunny_hugger was to organize the Michigan Women's Championship but that can wait for early 2022, we hope. Our IFPA ratings points continue to age and time out, growing less valuable at 12 and 24 months and disappearing entirely at 36 months. So far, this has made surprisingly little difference in our rankings. I've fluttered between 850 and 900th in the world;

bunny_hugger between 1100th and 1150th and she sits now as the 1111th highest-ranked player in competitive pinball.

I forgot to play any dollar games of Centaur, at MJS's pole barn, after New Year's this year. I wonder when I ever will again.

Now let's close out Saturday at Halloweekends, October 2019. I know it seems like few pictures; I was thinking to photograph more meaningful stuff so I didn't have four thousand blurry shots of a skeleton(?) with no idea why I wanted to share that. And now see where we are. 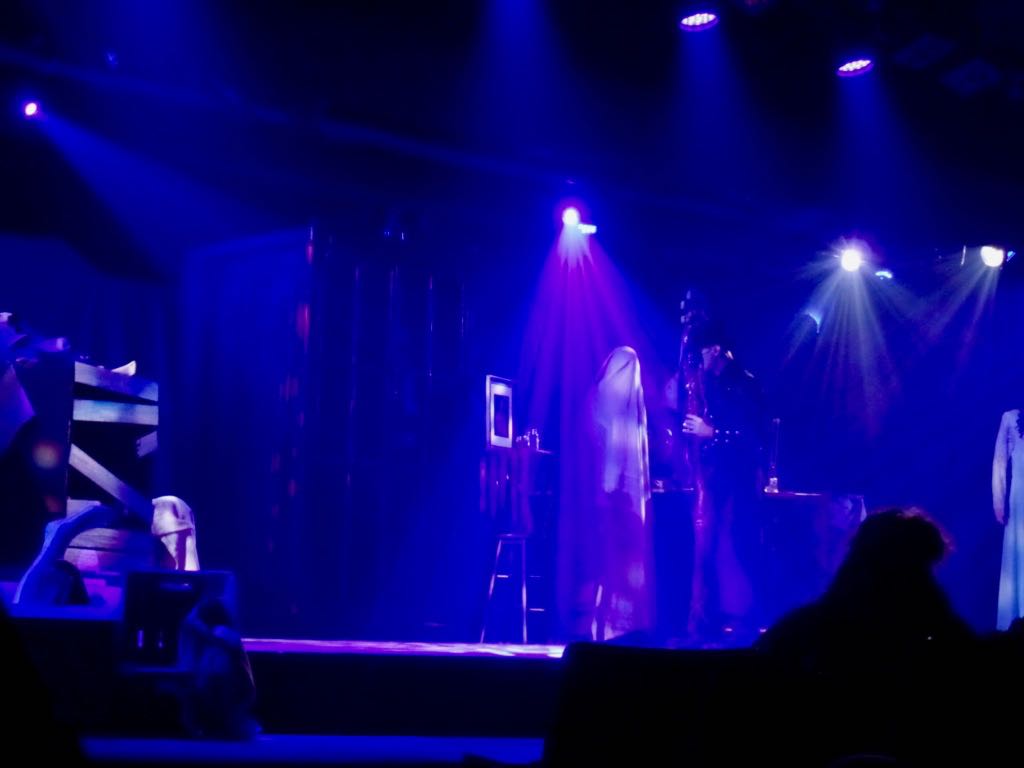 The Midnight Syndicate show, a blend of music and horror scenarios. We've been to several of these over the years and they're good shows, although you learn some of the fourth-wall-breaking tricks they do. 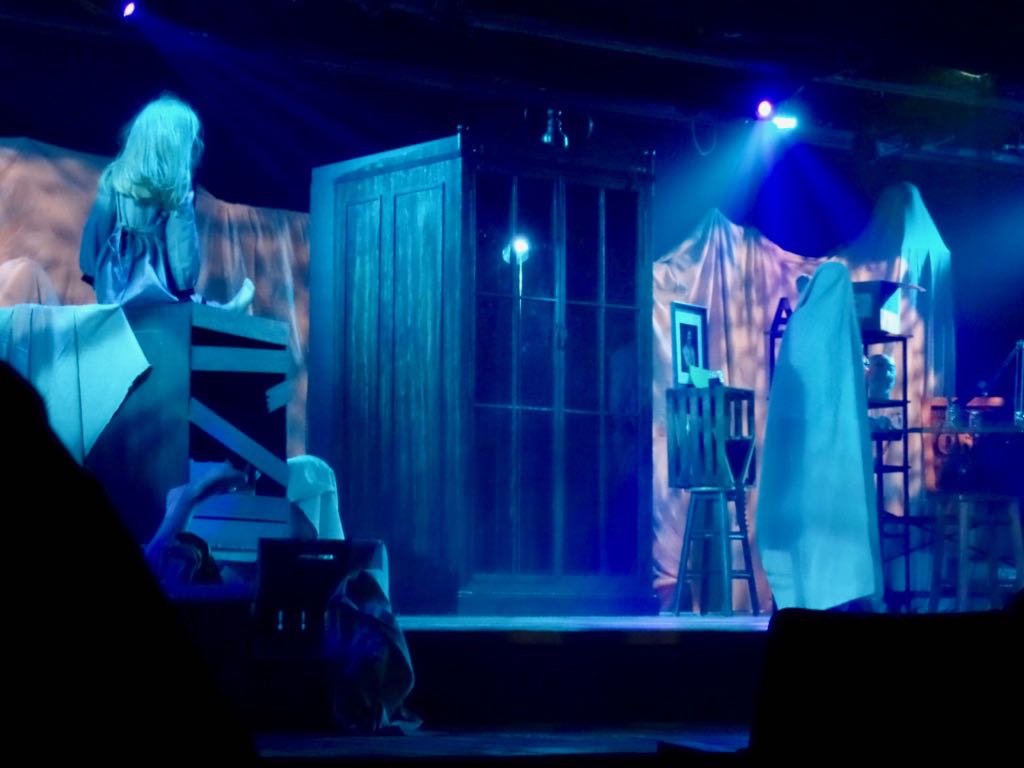 Horror/music set up in the Jack Aldrich Theater, which used to be where we'd see the dance-and-magic show. 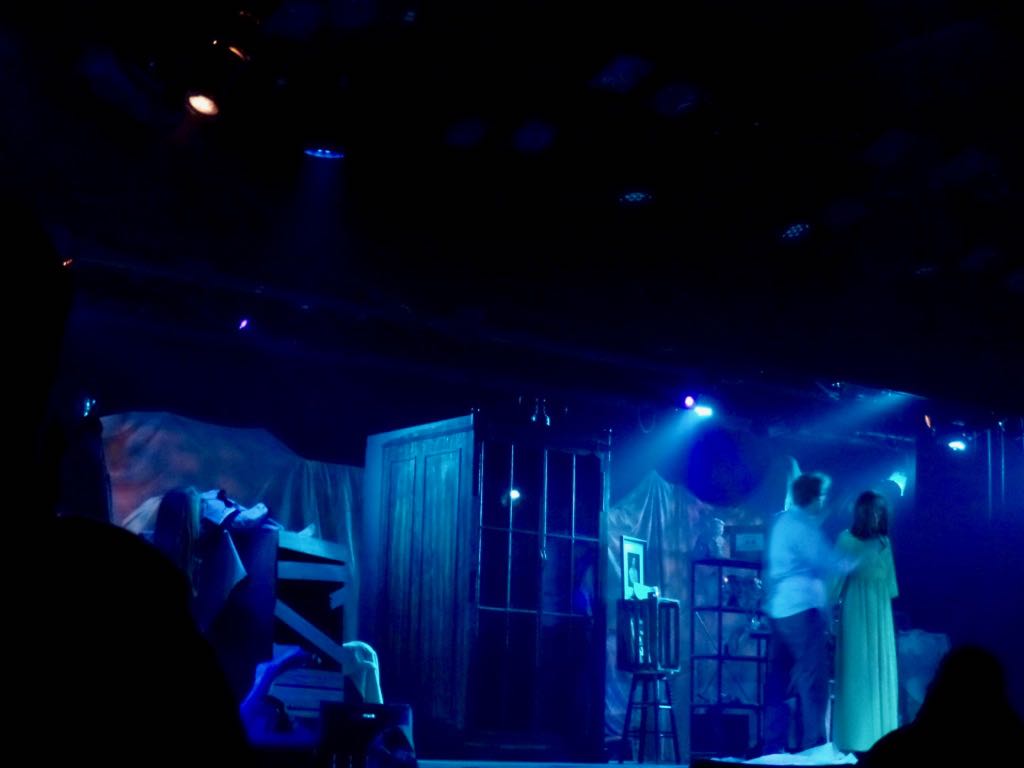 I forget the storyline at work; I think it was about an obsessed artist trying to make contact with his dead fiancee. (If it wasn't, the storyline was something about as good as that.) 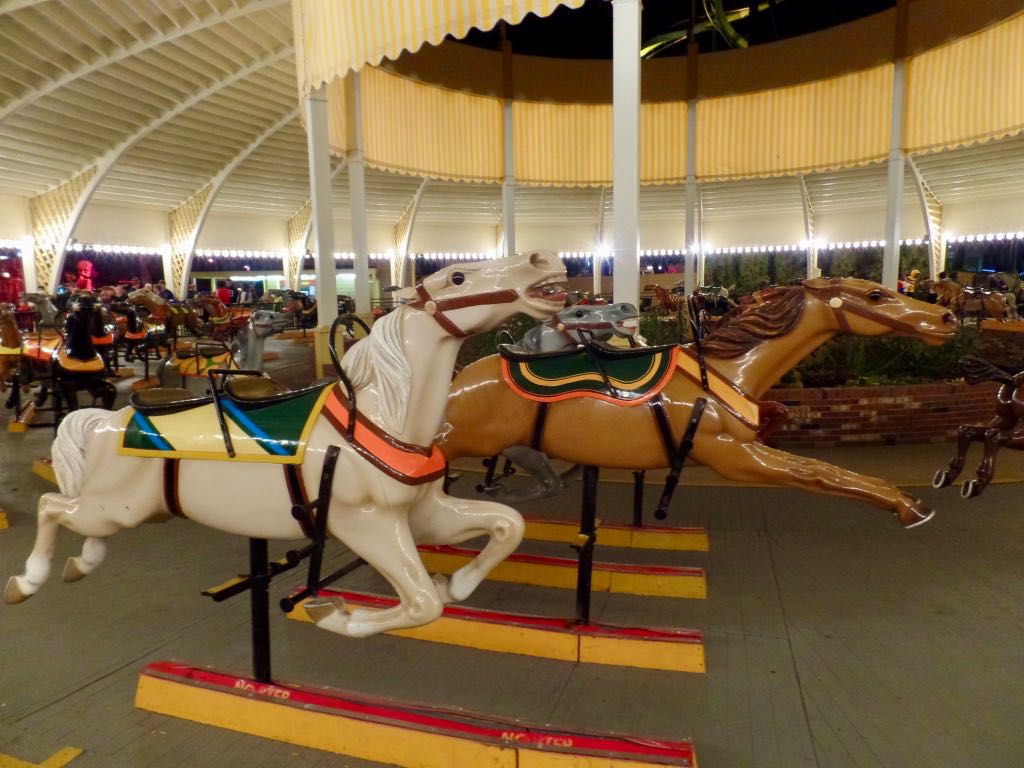 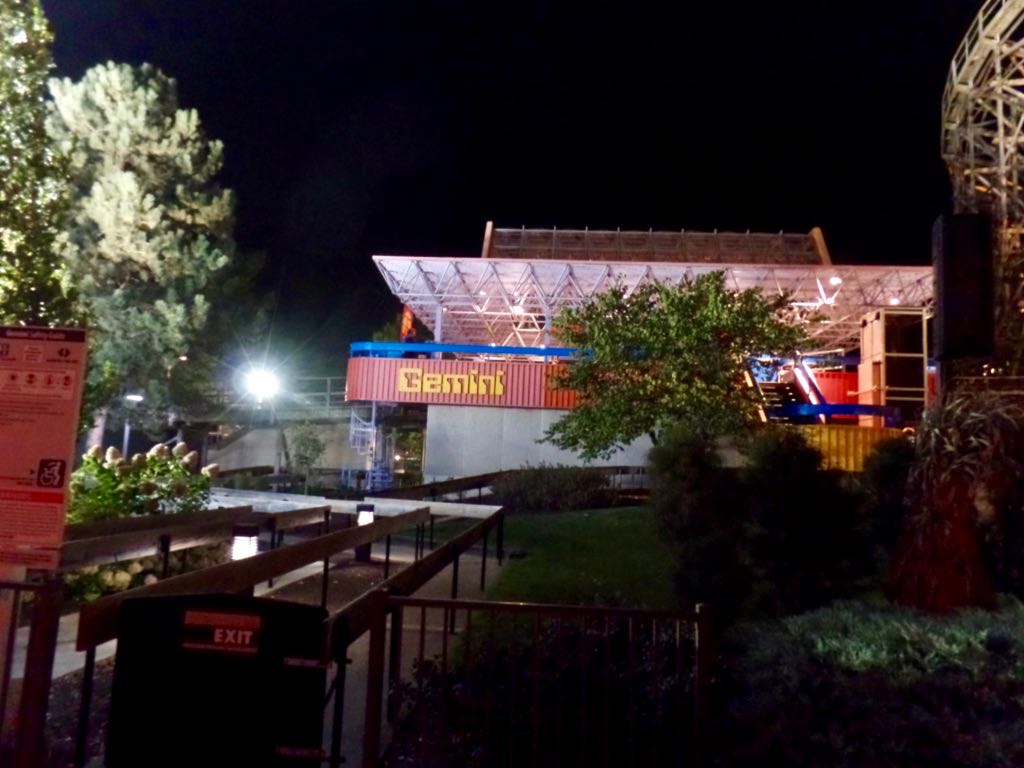 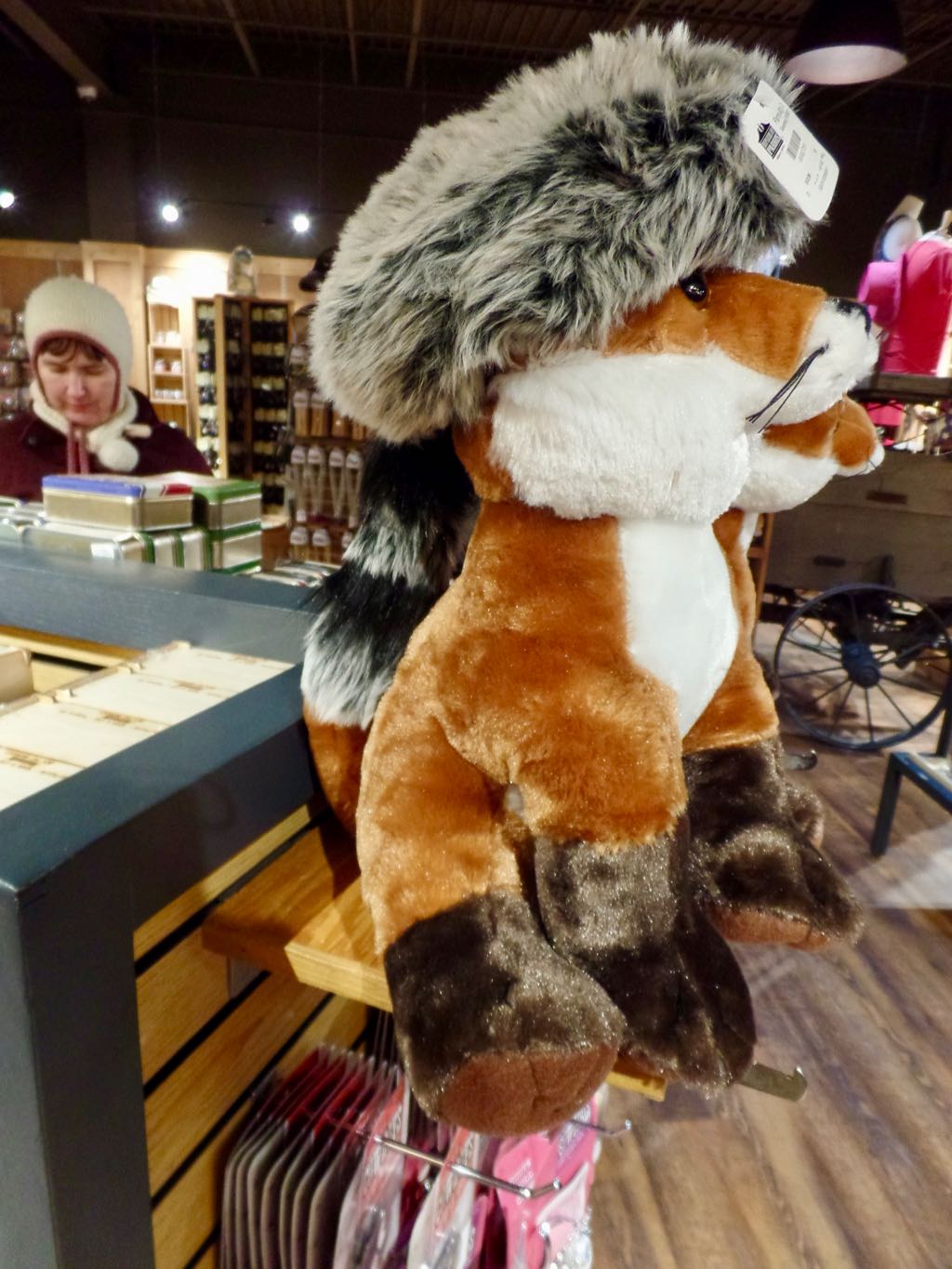 For not much reason we poked around one of the General Stores in Frontier Town and found this fox plush wearing a raccoon hat. (I think we put the [ fake ] raccoon cap on it.) 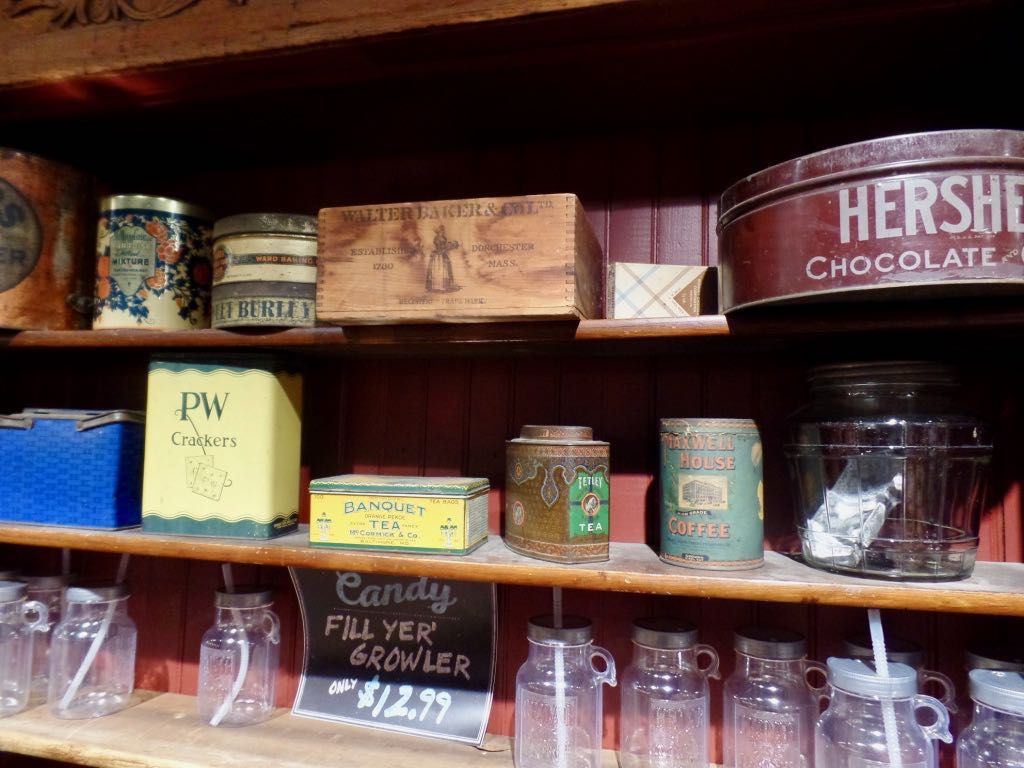 What interested us about the General Store is that this souvenir shop had antique packages all over the back shelves. None things that we recognized from the Town Hall Museum, and probably not all dating to any particular era, never mind whenever the Frontier Town is supposed to be set. But it's neat seeing this old stuff. 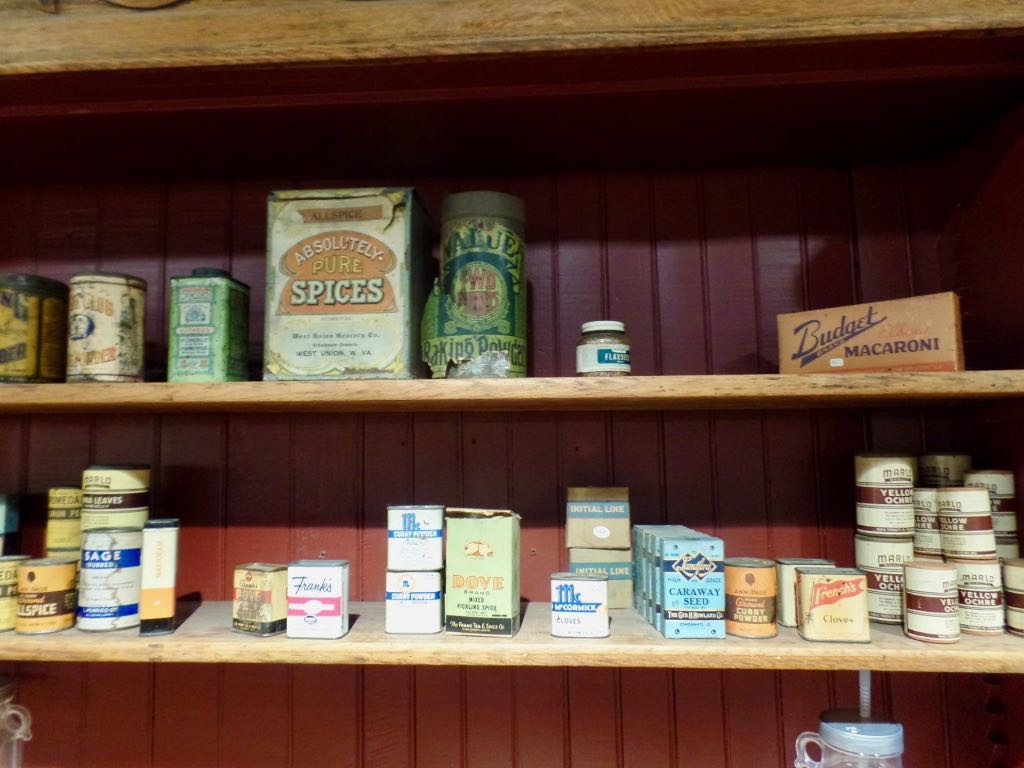 Pure spices, baking powder, budget macaroni, and a lot of carraway seeds and curry powder on offer. (Also, you forget that curry powder has been part of American cooking since the 18th century.) 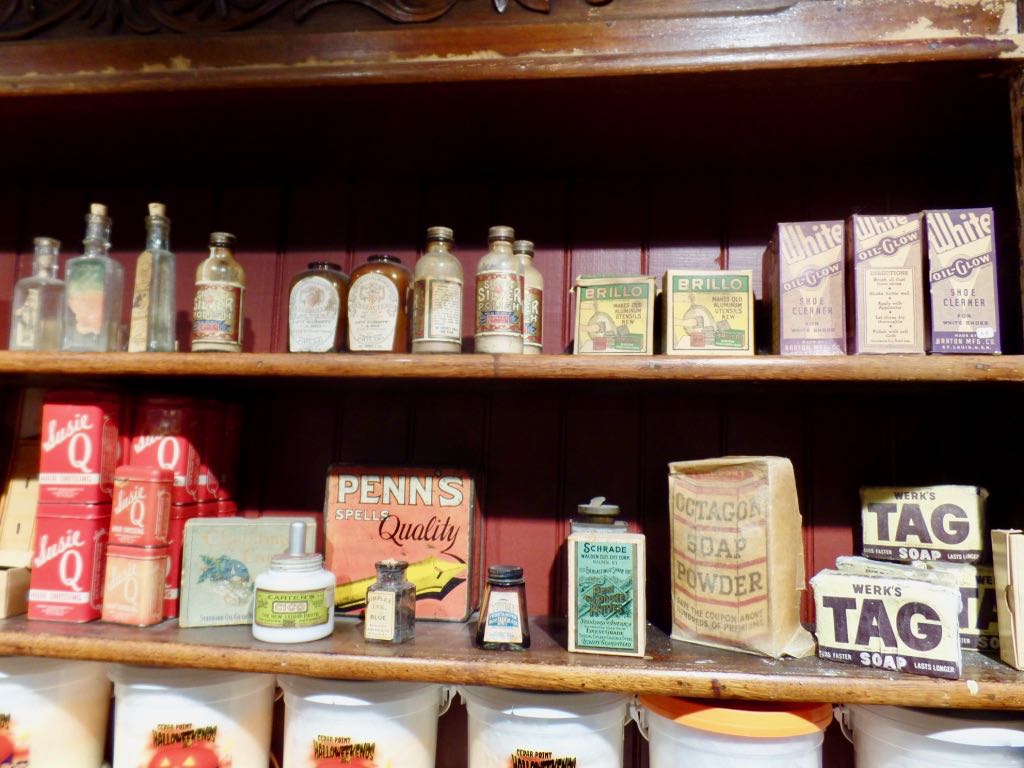 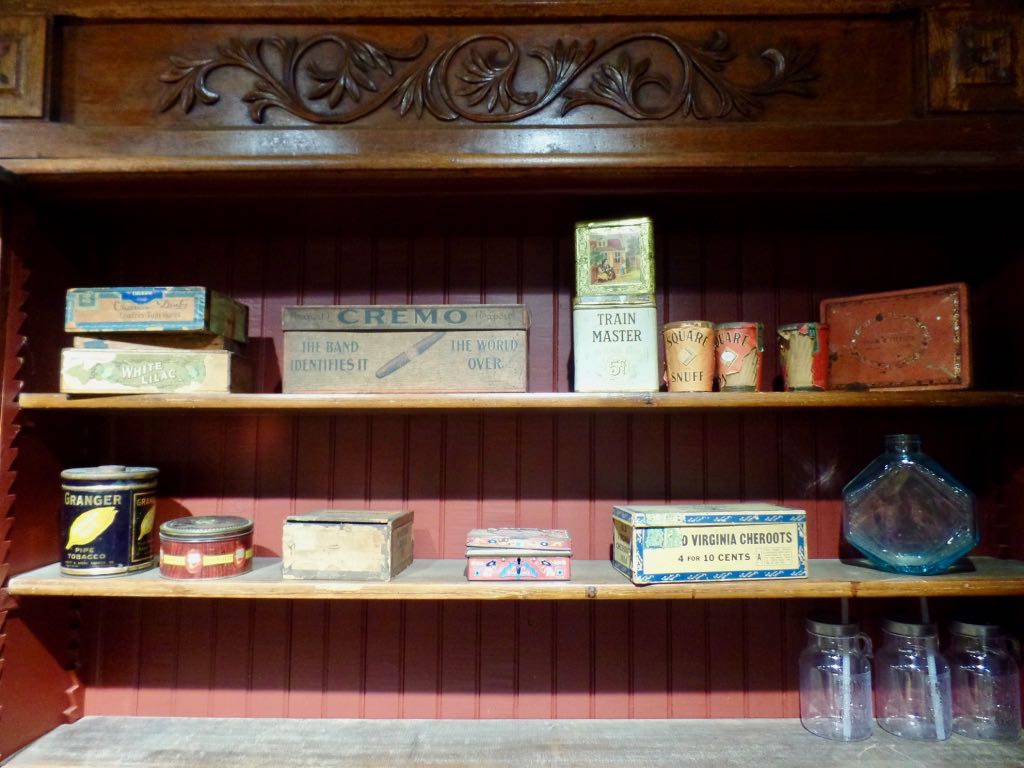 Cremo cigars: ``The band identifies it the world over''. They had a more basic idea of branding back then. 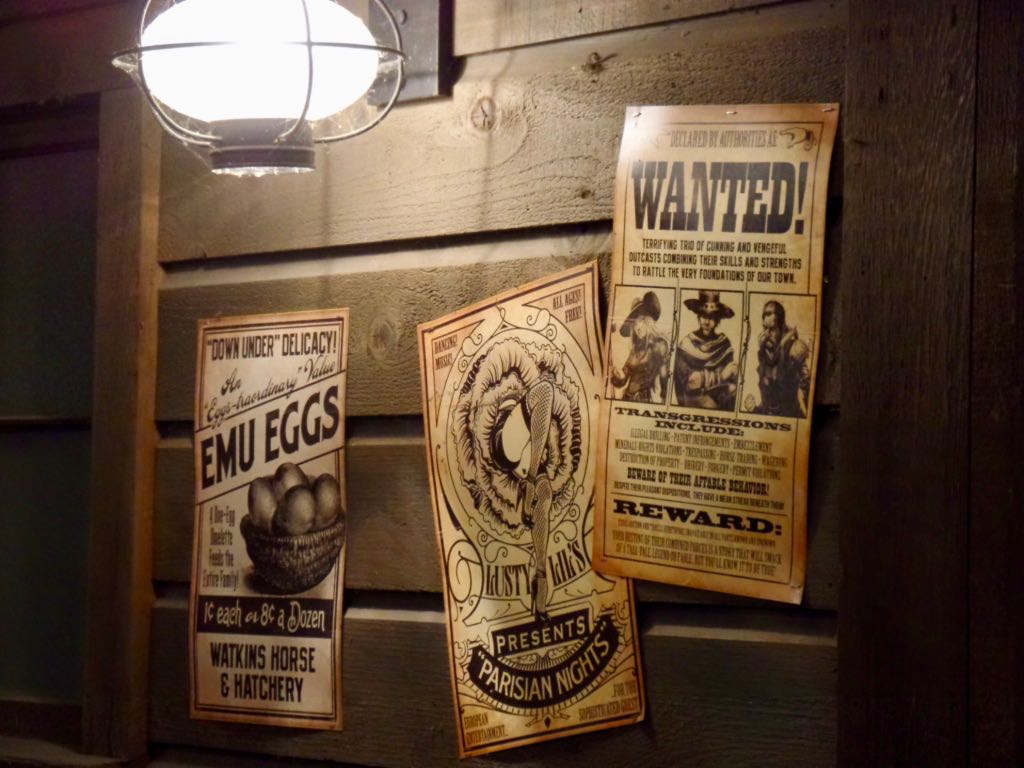 Not part of the General Store props. These are posters put around Maverick's station, now, to build up the Frontier Town Cinematic Universe. Notice the Watkins Emu Eggs thing; part of the setting is that Watkins figured there was no reason the Old West couldn't support emu farming. It's a zany element but I do find believable that someone would try farming emu in Old West Town. 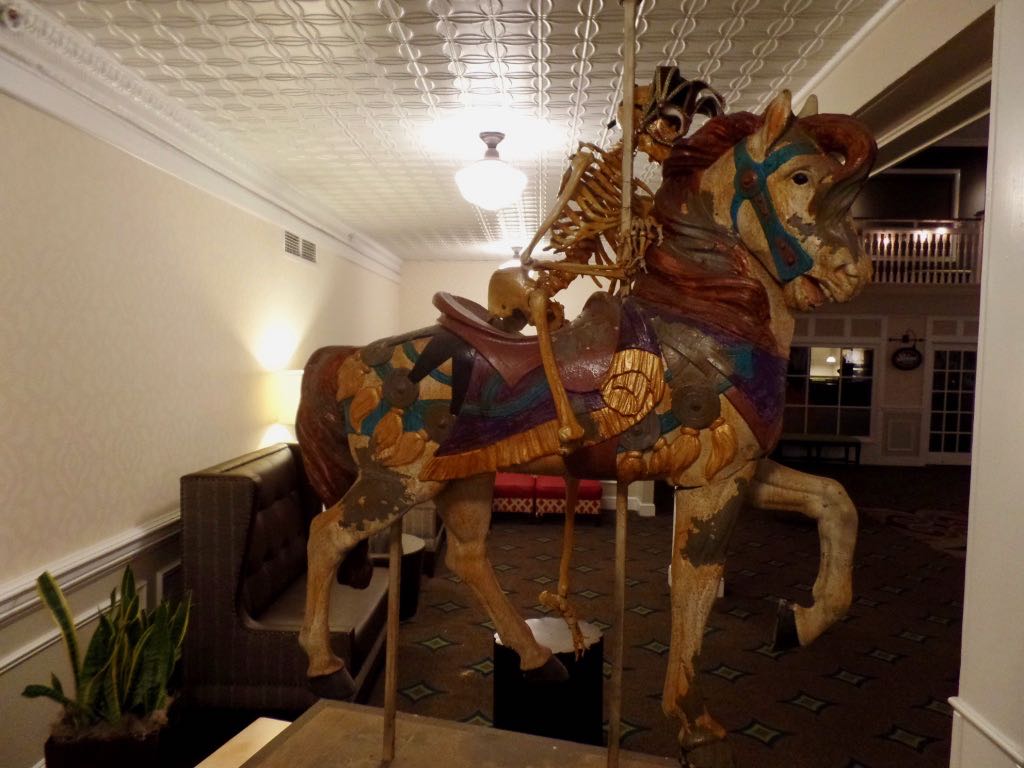 And finally turning in for the night! Here's one of the carousel horses in the Breakers lobby, which for Halloweekends is a skeleton riding a decayed horse. 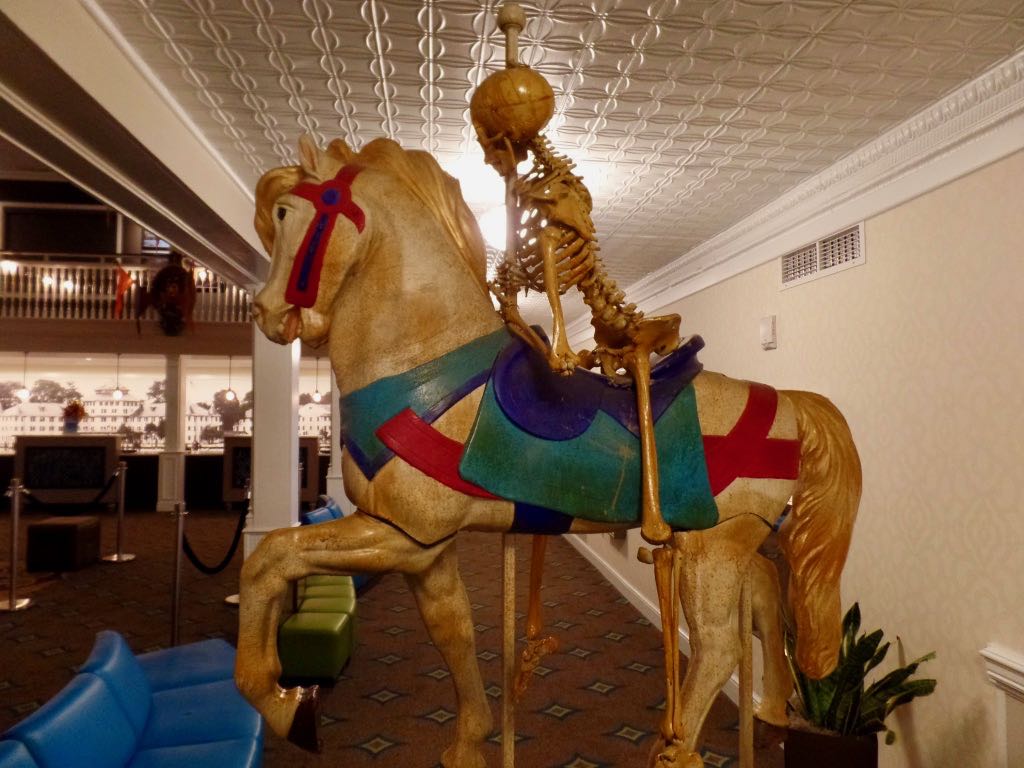 We have never seen in person the lobby without the Halloween haunted horses. We were figuring this would be the summer we'd just go in and look around.

Trivia: At the 6 December 1989 closing of the Leaning Tower of Pisa its tilt was growing at approximately one millimeter per year. Source: Tilt: A Skewed History of the Tower of Pisa, Nicholas Shrady.

Currently Reading: Fade In: From Idea to Final Draft: The Writing of Star Trek: Insurrection, Michael Piller. An ultimately self-published book which may explain why the title has fourteen colons in it.