Somehow lacked the time to write up what we've been doing. I'll get there. Meanwhile, the next thing on my photo roll is a Halloween party we went to last year, way off on the eastern end of the state, at the home of the guy who owns and runs the Sparks pinball museum/arcade that we get to for league play like four times a year. The two-hour journey doesn't throw us, but that it's Monday evening and we have to head in to Detroit makes it harder than going to Fremont, just as long but in the other direction. We went to MJB's wearing our Stitch and Angel kigurumis and had a great time all around; MJB went way, way, way big decorating for Halloween and putting together an amazing party, plus pinball and more. 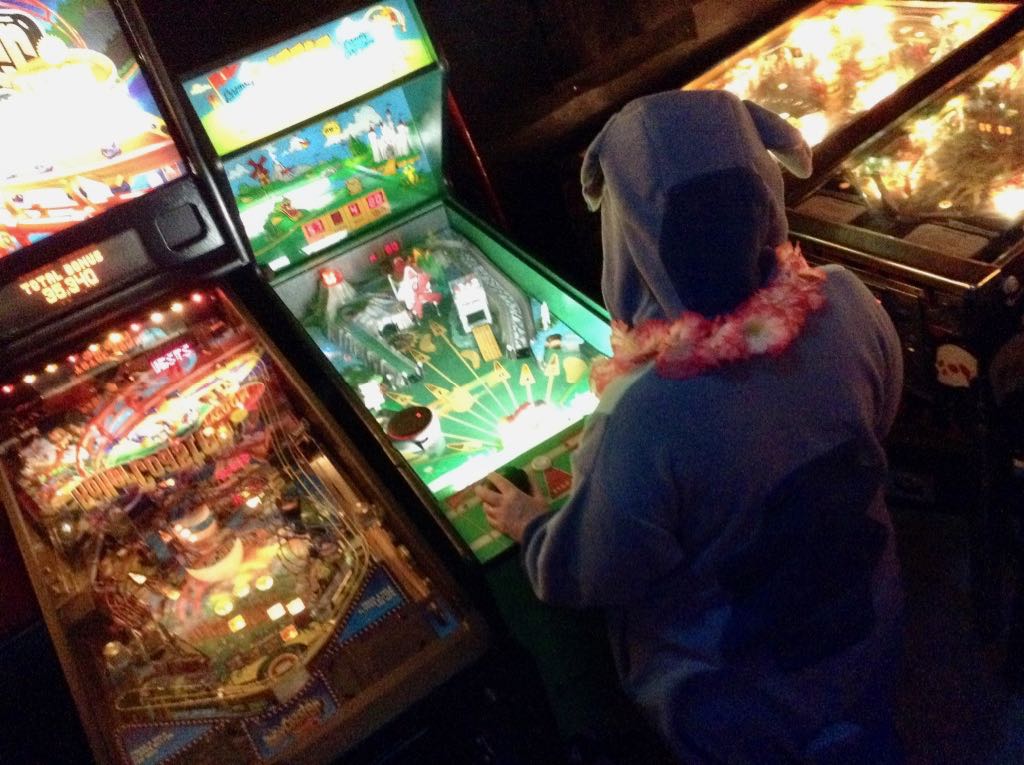 bunny_hugger, as Stitch and wearing a lei (she also brought a ukelele), playing one of MJB's pinball-adjacent games. This one's a golf-themed one where you can just control the direction the ball launches, and try to get into as many holes as possible before using up your finite number of balls. 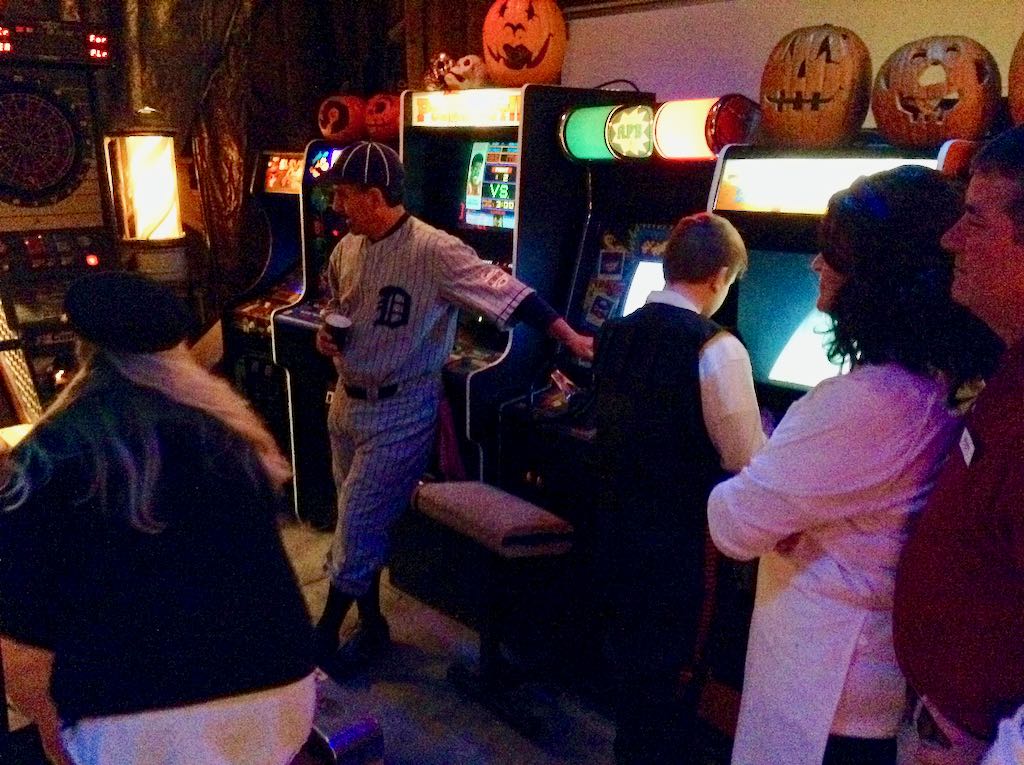 Folks in costume in the pinball building. 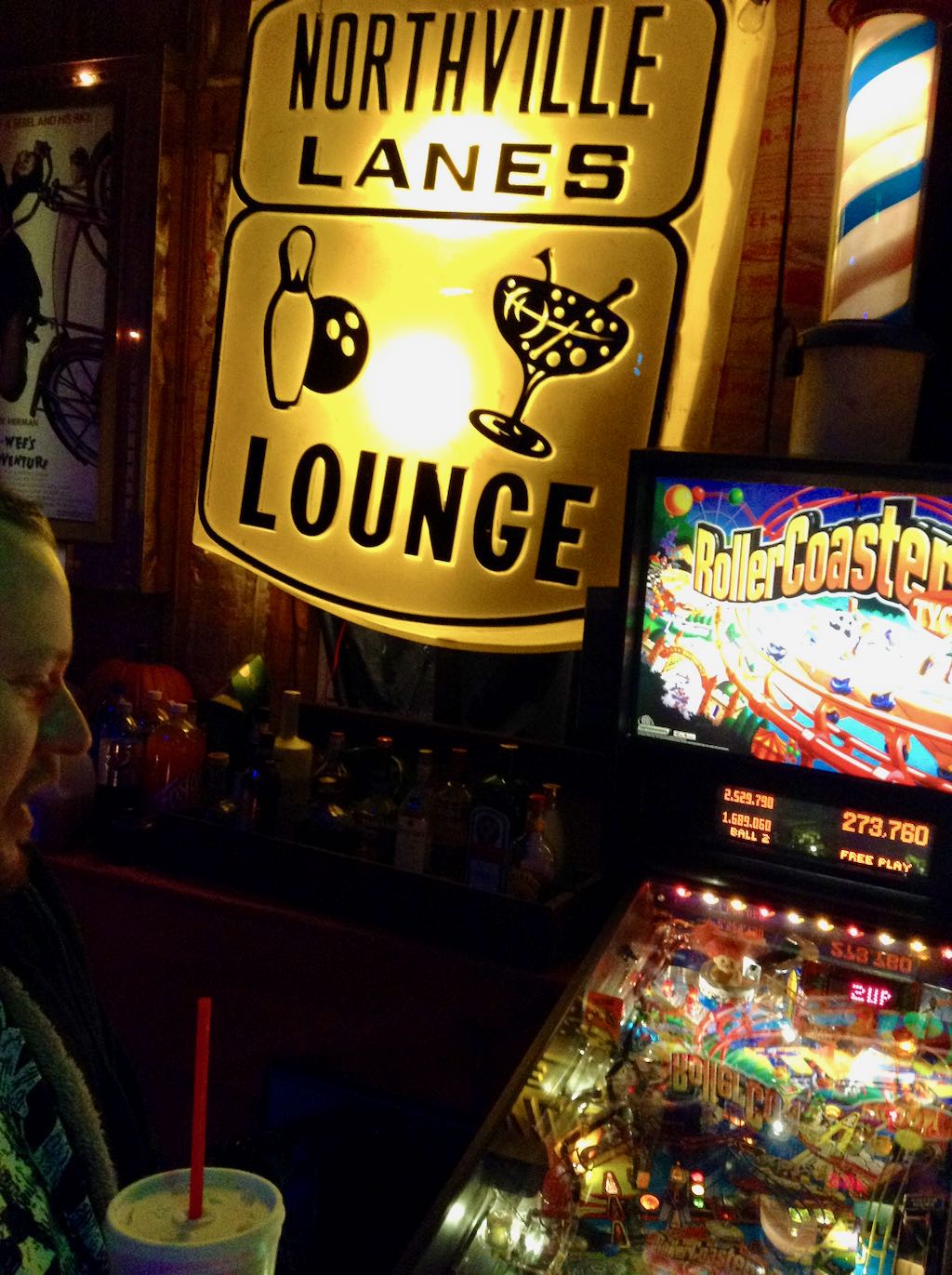 MJB also collects, or rescues, vintage signs, such as this from a bowling alley. 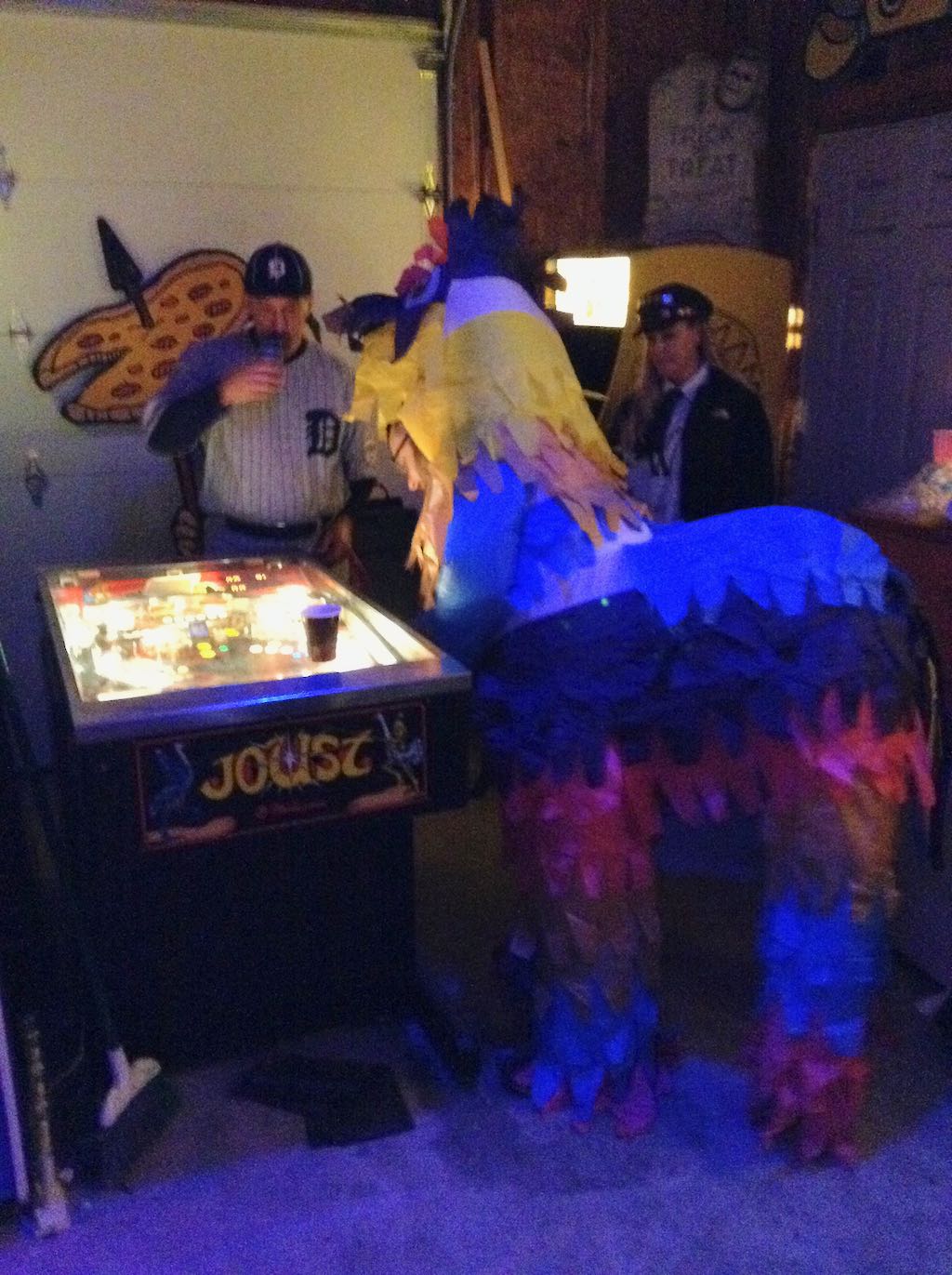 bunny_hugger creamed me on that game every time we played. 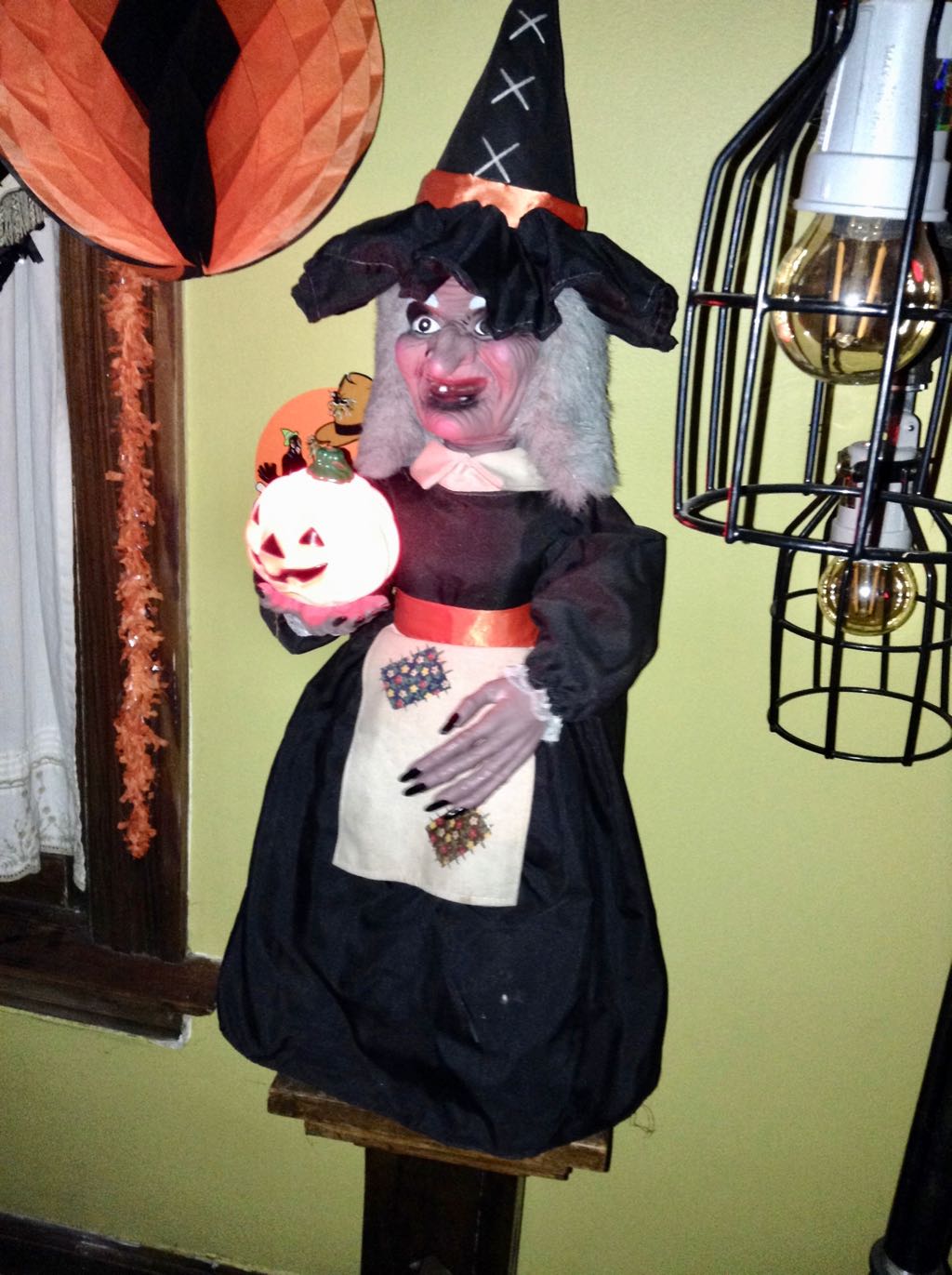 Witch prop that MJB set up inside as part of the elaborately decorated house. Also one of the few flash photographs I felt courageous enough to take. 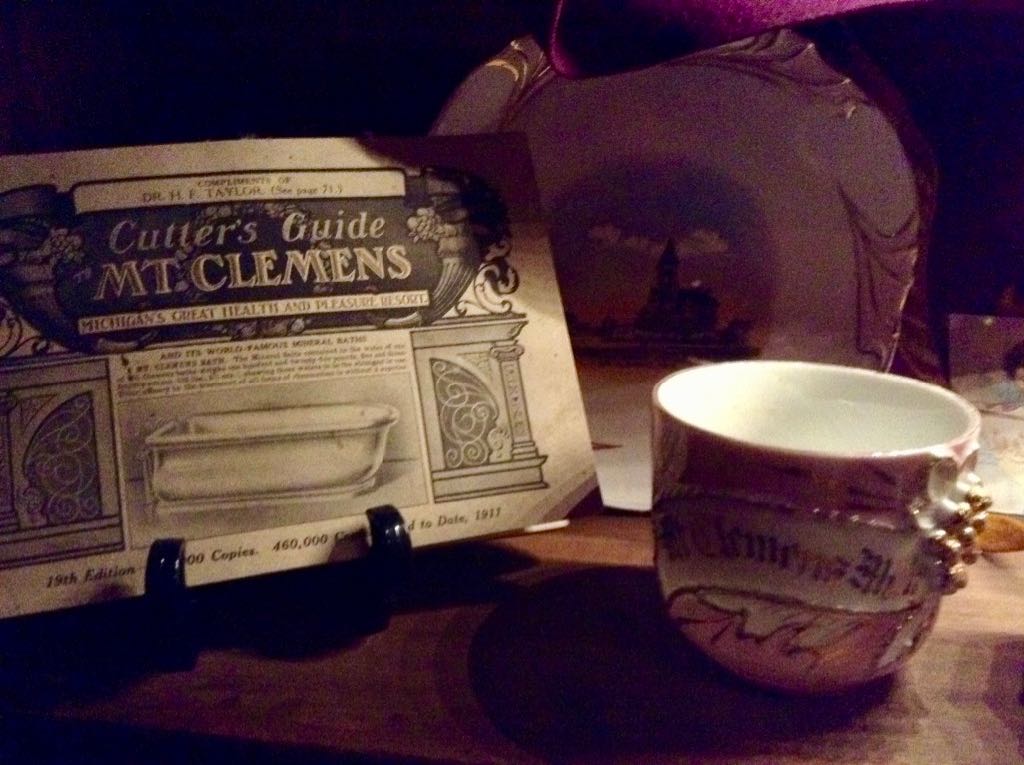 MJB also has a bunch of historic souvenirs. Mount Clemens was, in the old days, a spa/hot springs and while that's passed, the mineral springs were important for a long while. 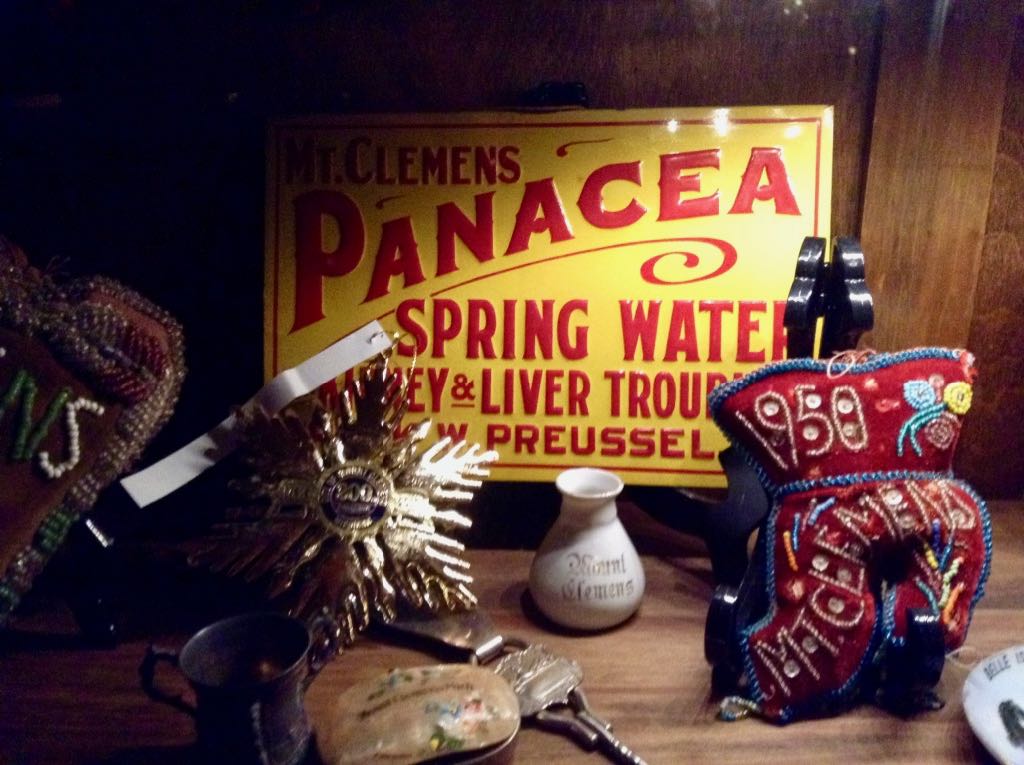 More souvenirs and signs from when the area springs drew health-conscious visitors. 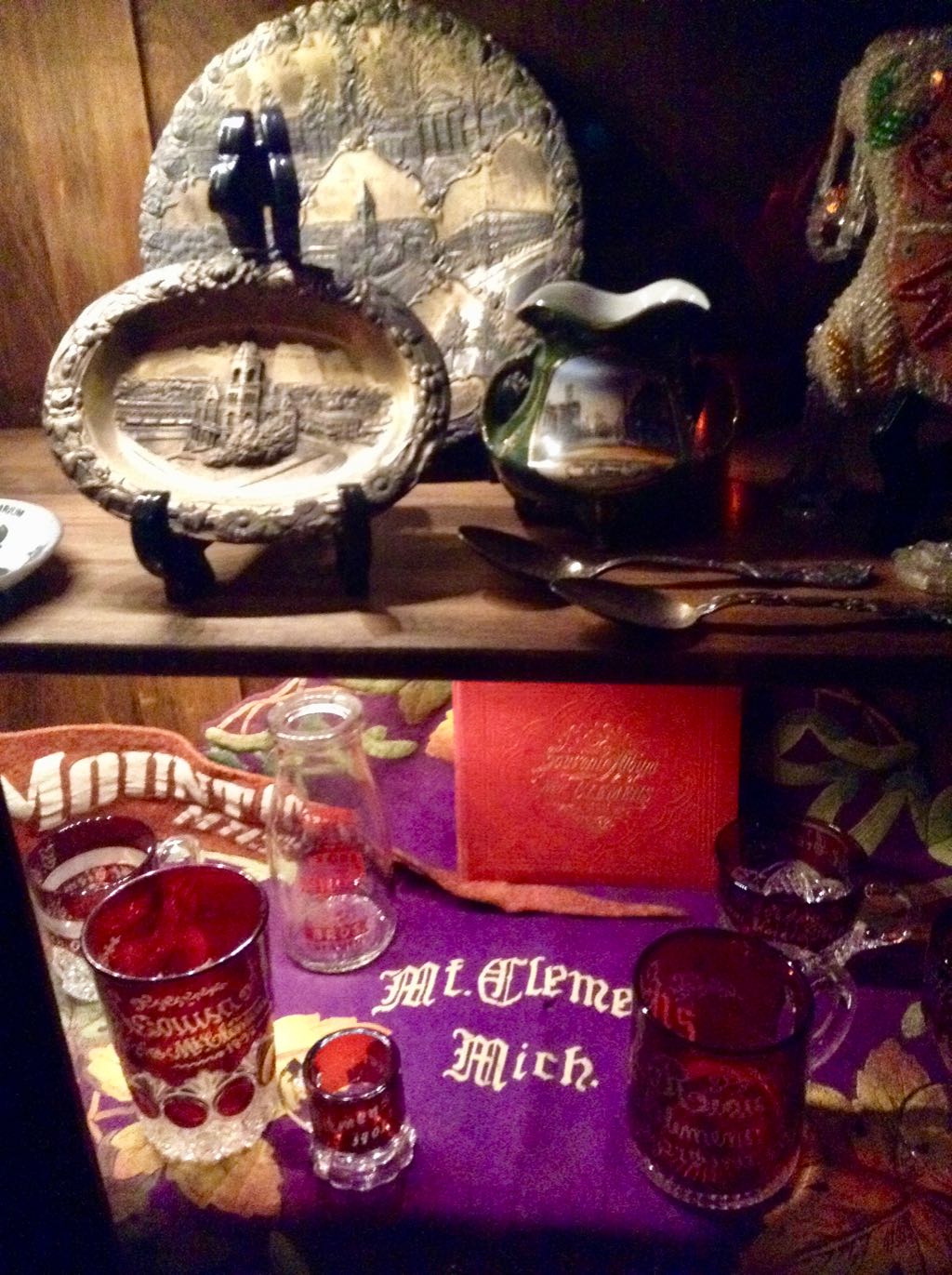 Moulded plates, jugs, spoons, glasses, blankets, even a penant. This is very much up our alley too; it won't surprised you MJB's one of our favorite folks we know on that side of the state. 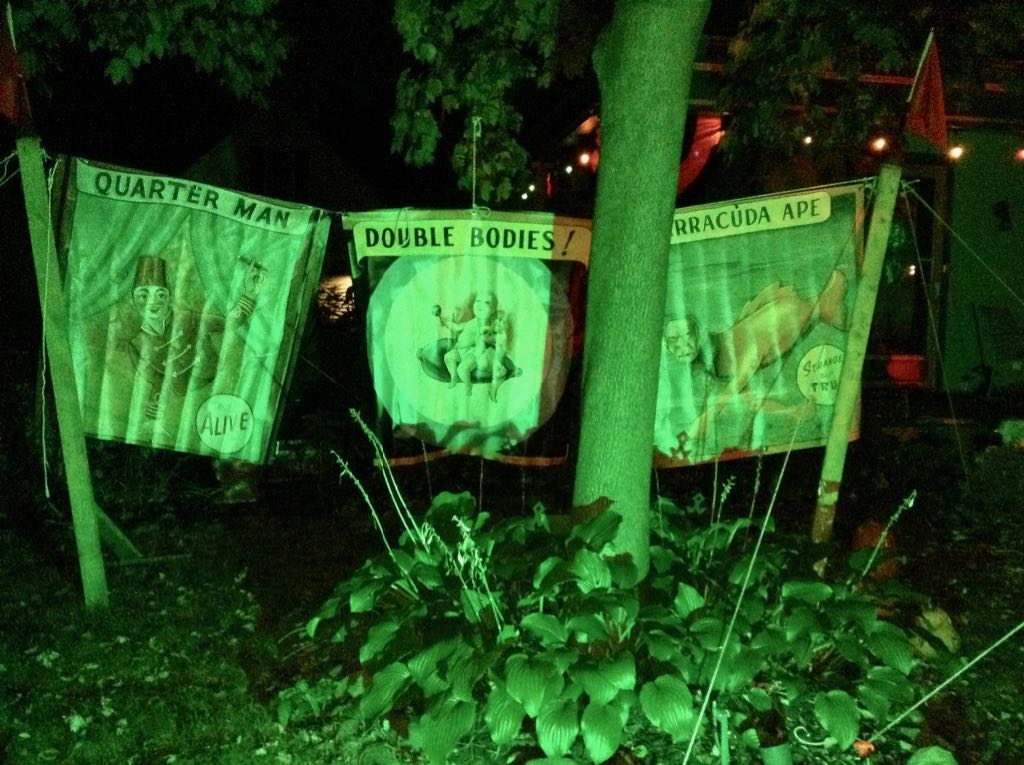 The place was decorated outside too, with for example these replica freak show posters. 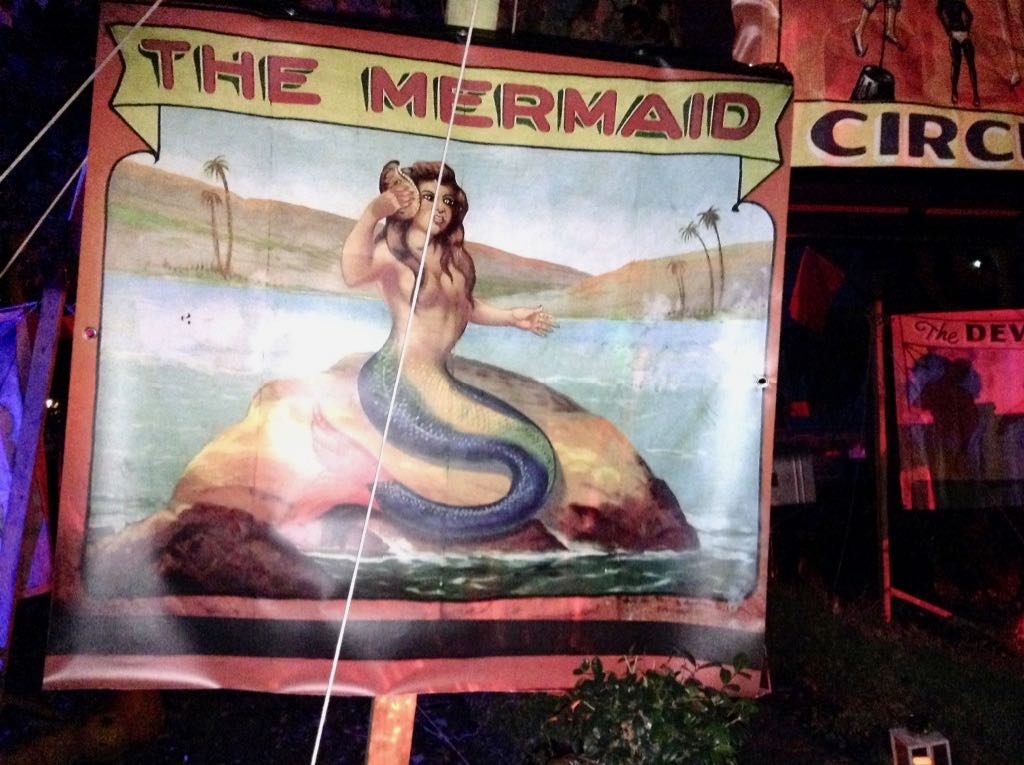 I think these are some of the same ones they use for the freak show themed area at Cedar Point Halloweekends. 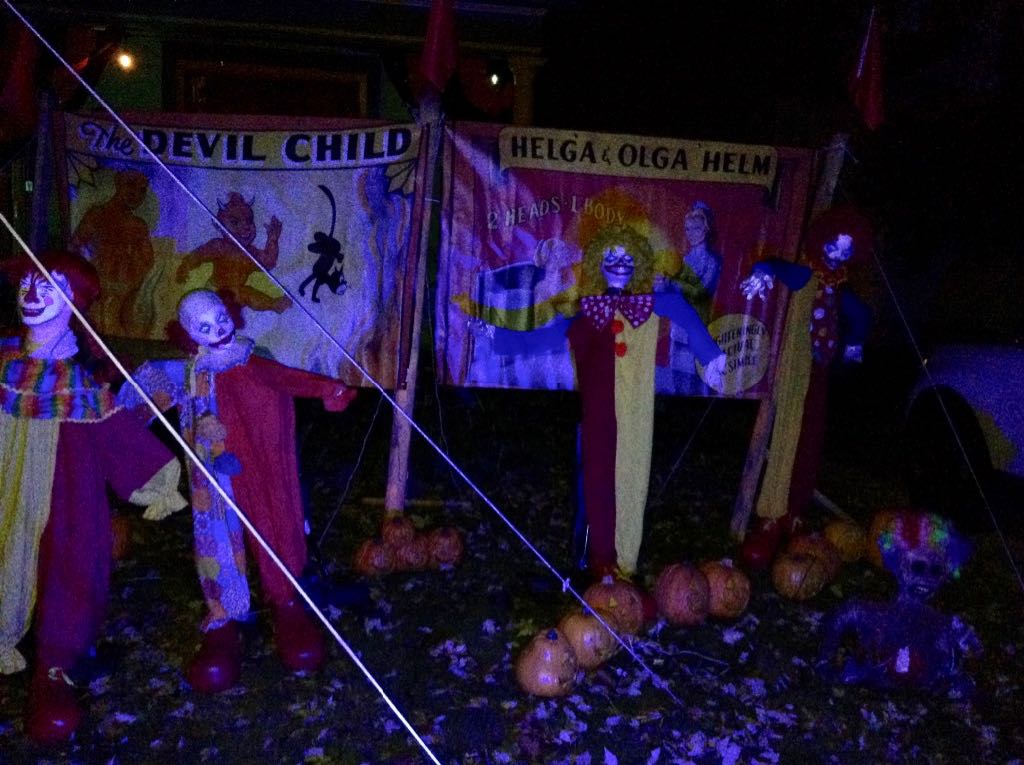 I'm not into the clowns-as-inherently-scary thing but it's still amazing and you have to feel for the neighbors who have so much traffic coming around to see this all October. 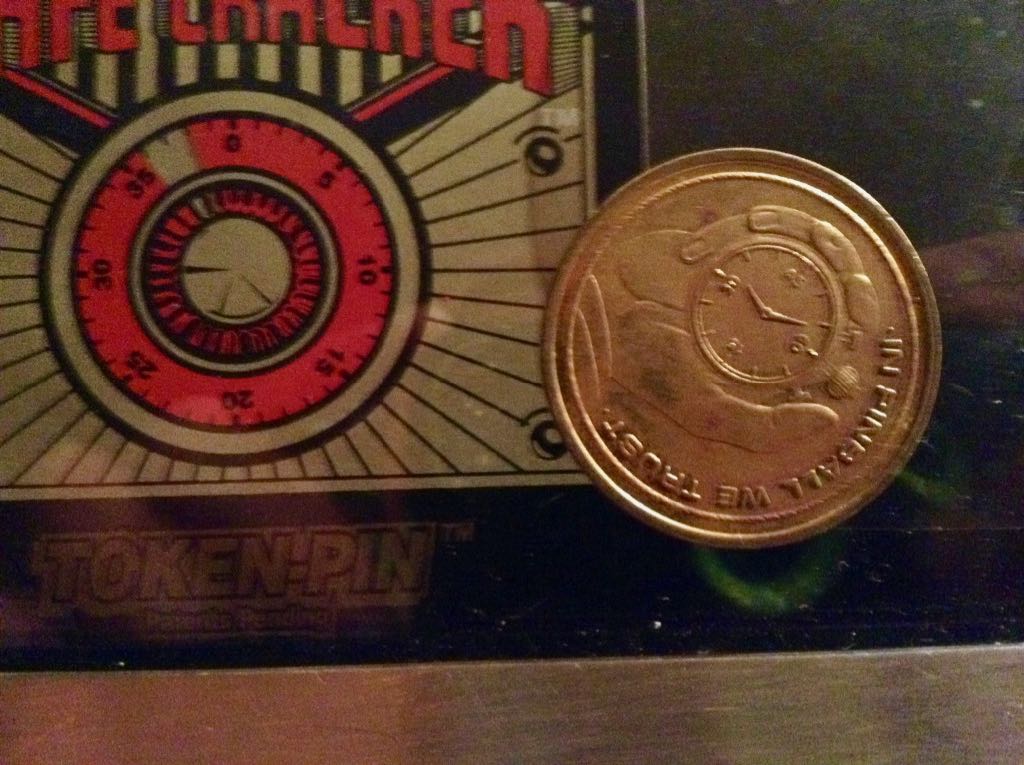 MJB has a Safecracker game, and one of the small-size pinball table's gimmicks: a special Safecracker coin that you can use to play a game under different rules. He gave us one to try out the novel rules that we didn't appreciate because we barely understand the basic ruleset. 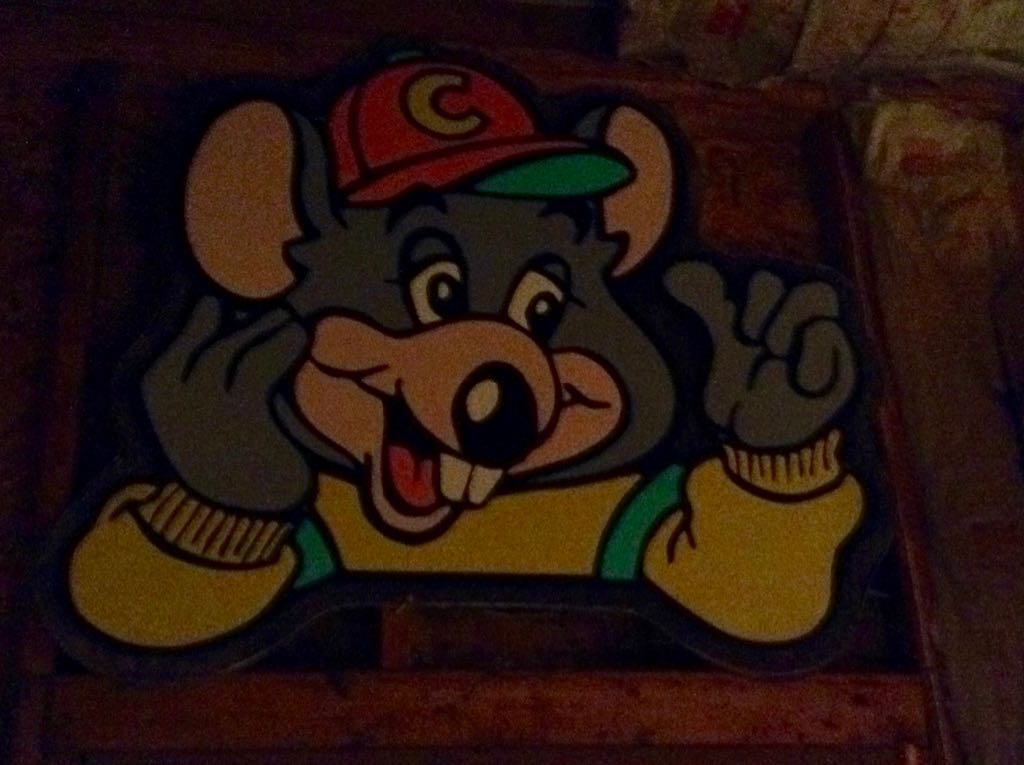 And a good-size Chuck E Cheese --- I think it was three feet across --- sign hung up near the ceiling. 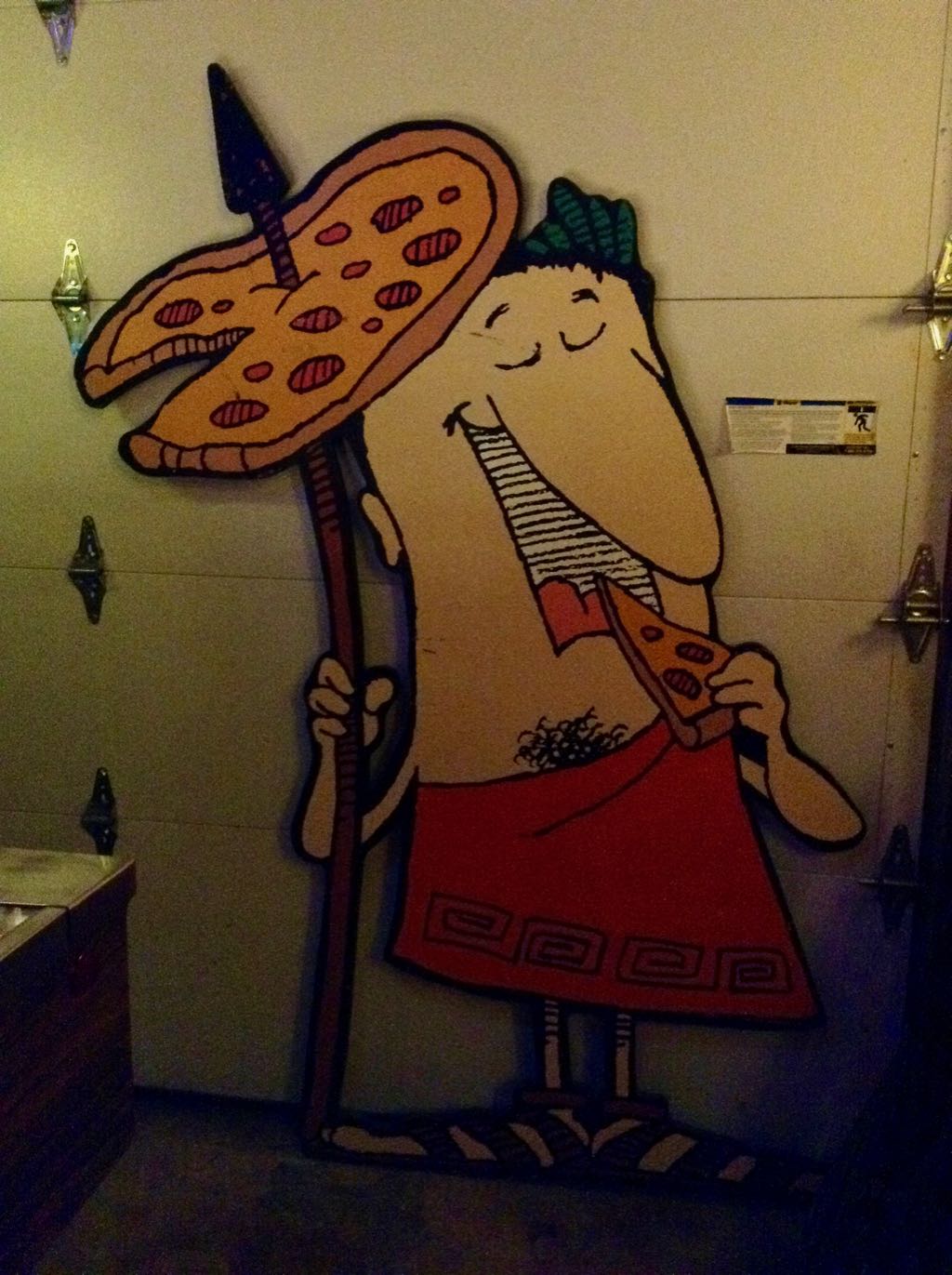 Trivia: Franz Kafka wrote an article for Prague's Deutsche Zeitung Bohemia, a daily newspaper, about the Brescia air show of 1909. Editor Paul Wiegler cut about one-fifth of the text, including Kafka's writing about the trip to Brescia and the dirty hotel. Source: The Air Show at Brescia, 1909, Peter Demetz.

Currently Reading: The Taste Of War: World War II and the Battle for Food, Lizzie Collingham. The writing feels serious and well-researched and the endnotes are copious but boy does it just needlessly shoot credibility in the leg for the (British) author to talk about the United States's food requirements from the Ministry of War, or about policies enacted by the Secretary of State for Agriculture. Then when I come across a mention that Japanese farmers during the war had a total of 99 tractors in the whole nation ... I mean, it's amazing but, wow, really?