The world is a ribbon of road for you

The Beast was, and is, a fun ride. Here's what we got to after riding it, including a discovery of something neat that paralleled a thing at Cedar Point. 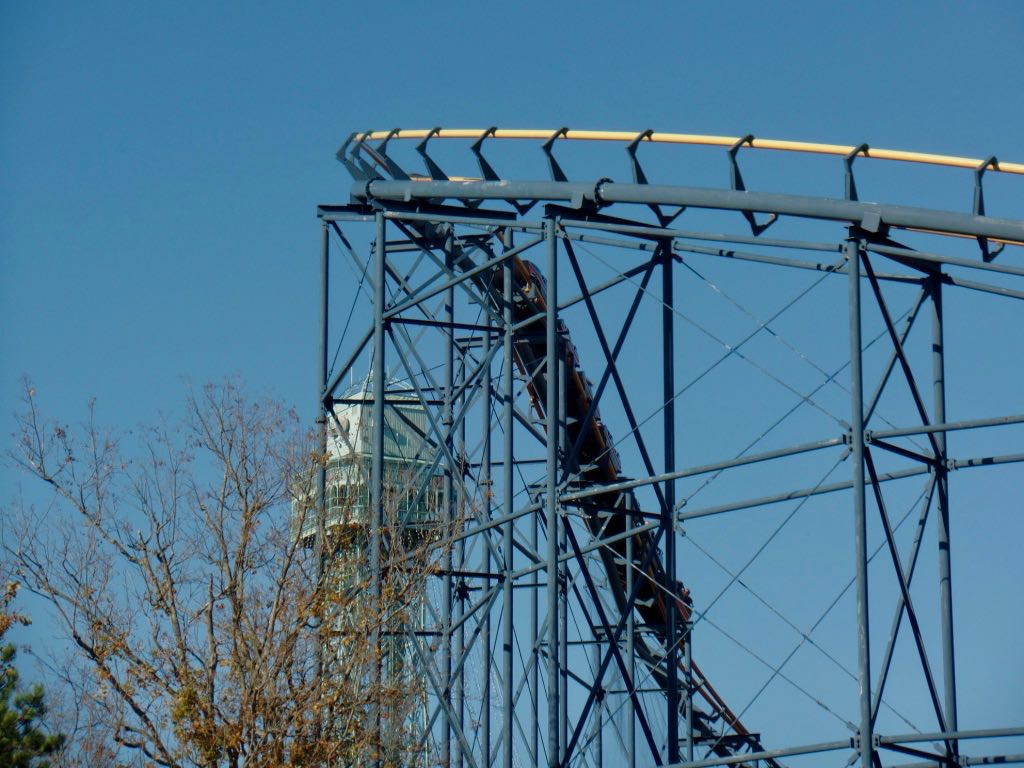 Vortex train completing a turn and dropping into some loops. The miniature Eiffel Tower's in the background. 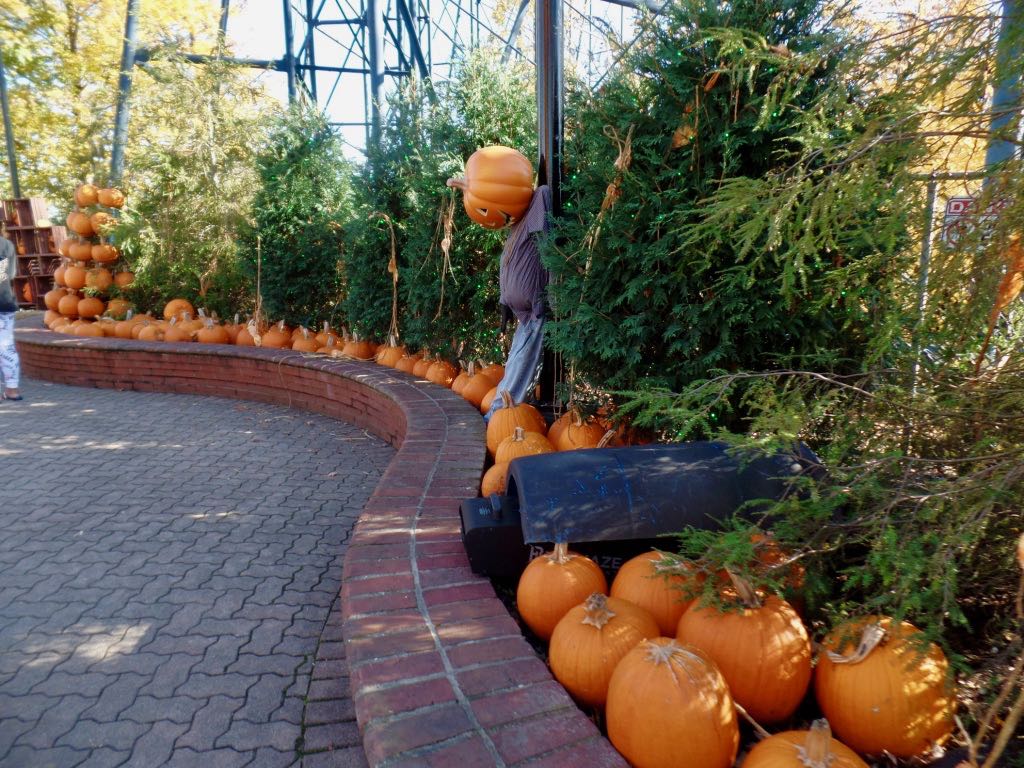 Hey, it's the Scarecrow of Oz! We should talk with him some. 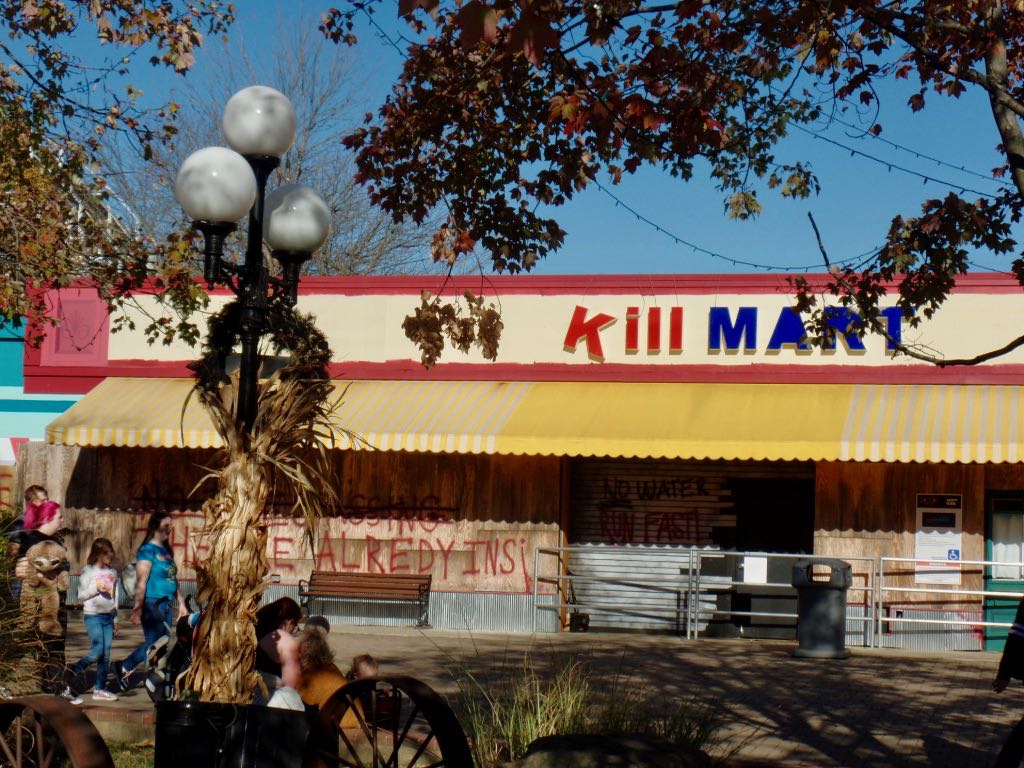 We assume the Kill Mart is one of the haunted house attractions, probably with a zombie theme. We know it's not just decoration since there's the ride/experience warning sign off on the right. 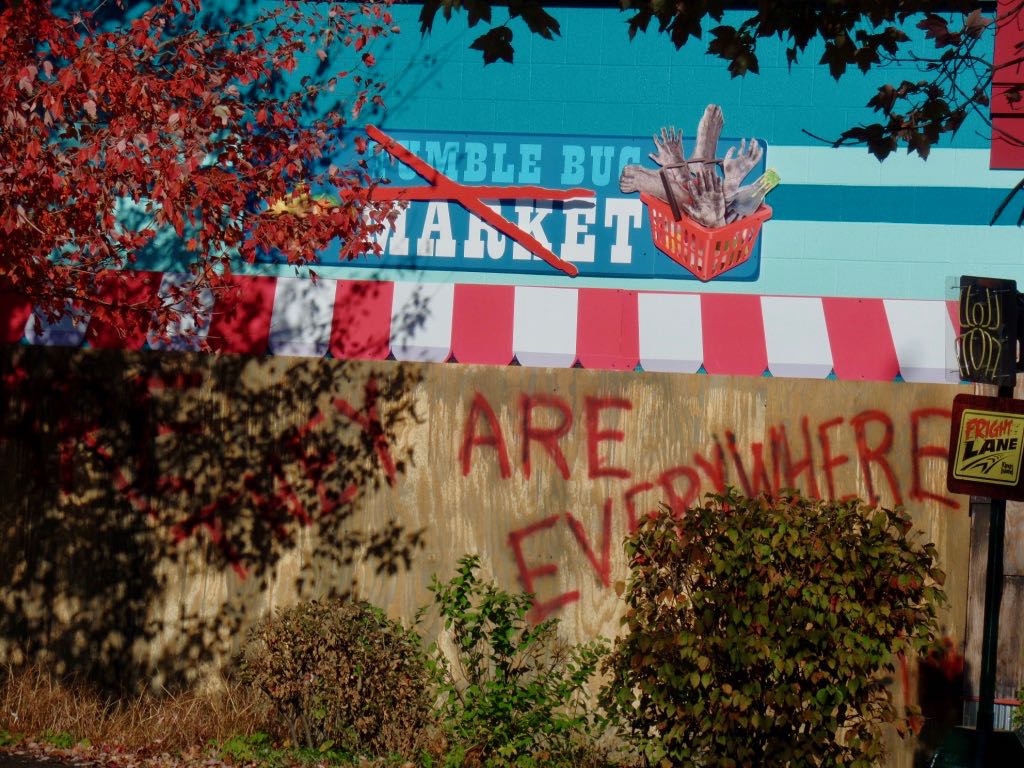 The other part of the Kill Mart facade caught our attention because of the name Tumble Bug Market. The Tumble Bug is a ride that Kings Island had from 1972 through 1985, and that they inherited from predecessor park Coney Island C--ti. Tumble Bug is the ride known at Kennywood as the Turtle, and at Conneaut Lake Park as, well, Tumble Bug; it's remarkable to have a ride like that be remembered in this faint way. 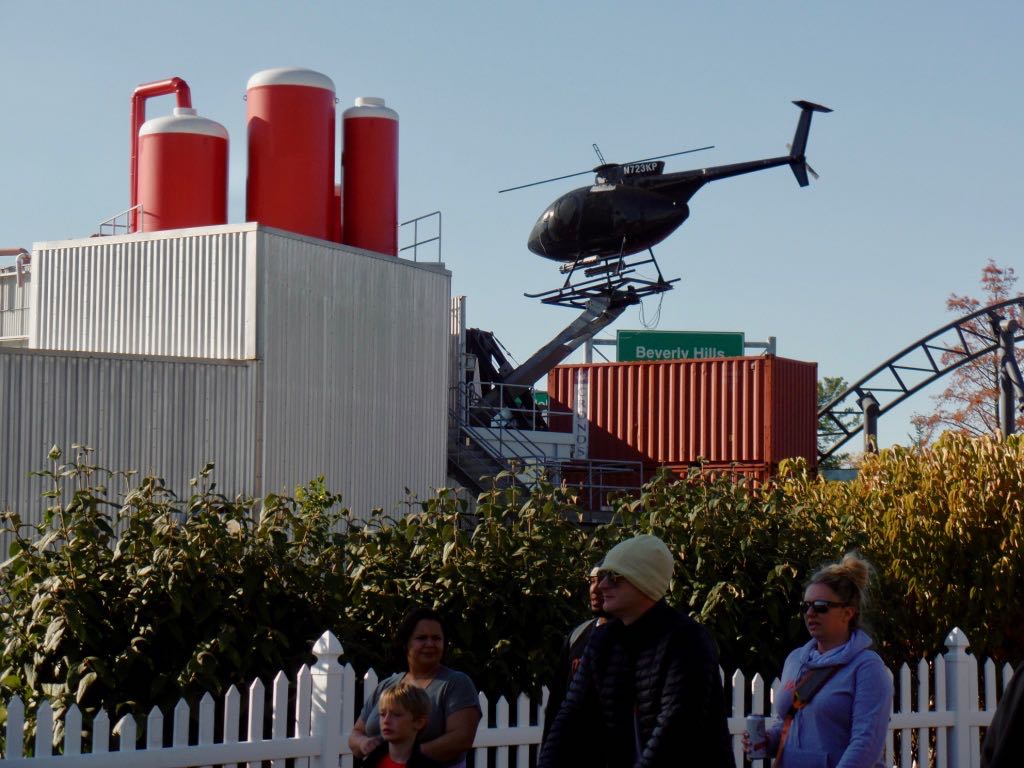 Peering over at the Hollywood Movie props that are part of the Backlot Stunt Coaster roller coaster. 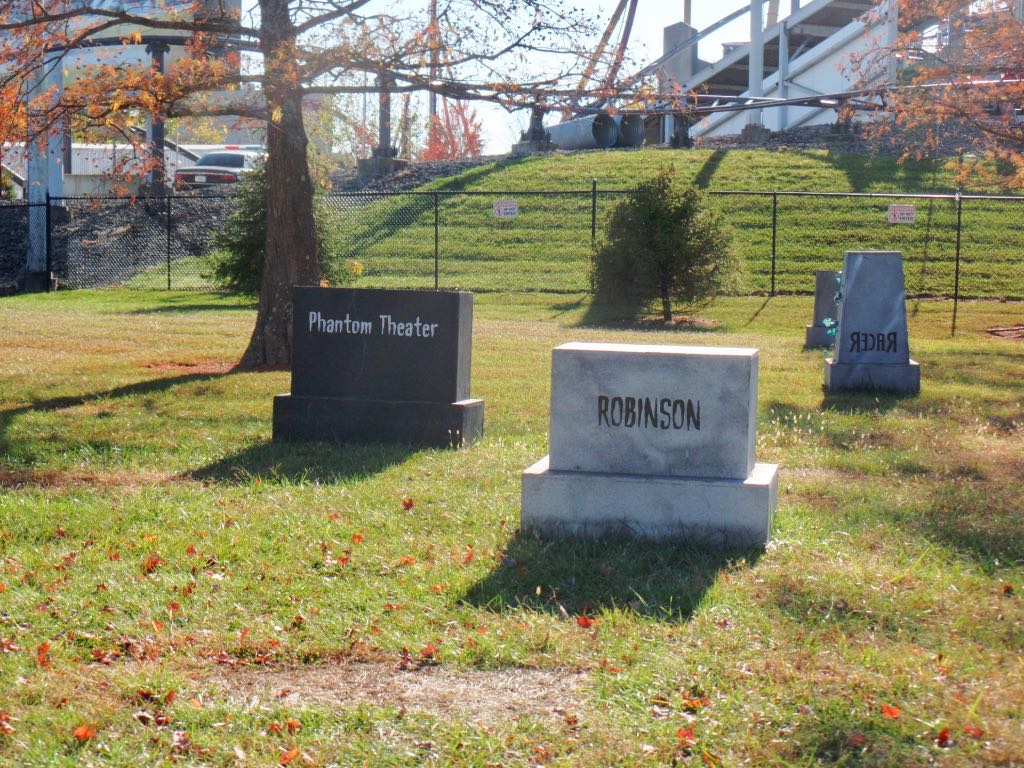 We weren't surprised to see fake gravestones, but the mention of Phantom Theater and the backwards Racer did surprise us. We thought it might be a rides graveyard, as at Cedar Point, but then the Robinson name threw us. Apparently they just mixed some regular-looking names into the graveyard along with ride and attraction names. 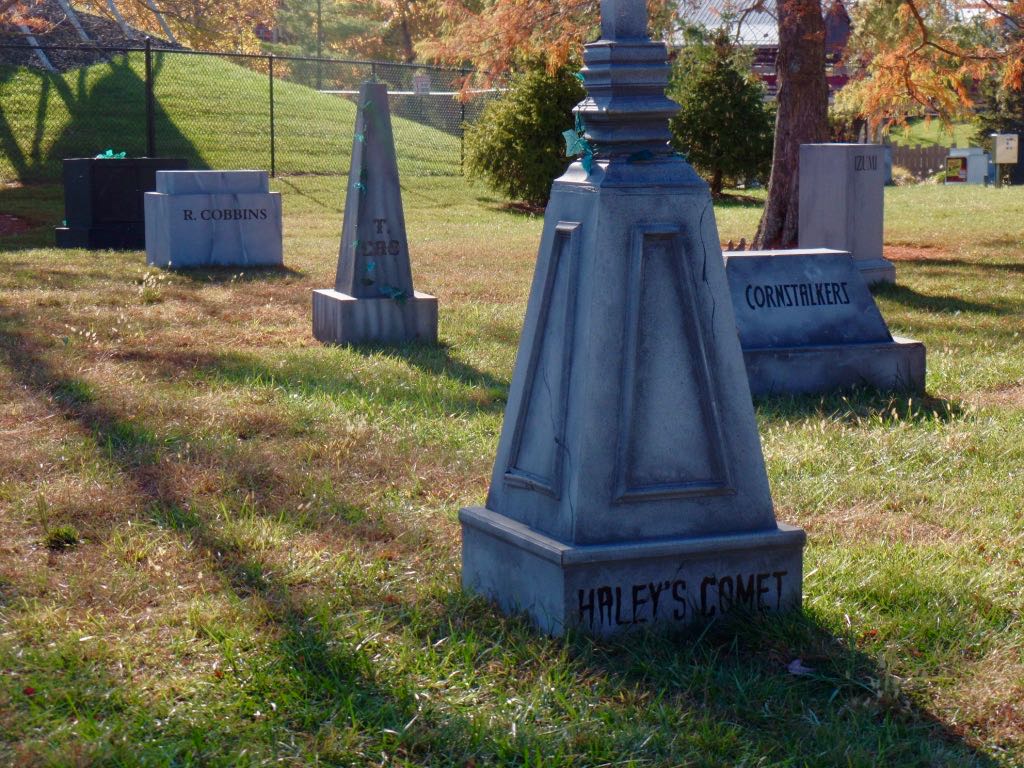 Halley's Comet was a Round-Up ride that they'd had from 1972 to 1979. We assume Cornstakers was a discontinued Halloweekends attraction; it's still among the walk-throughs at Cedar Point. 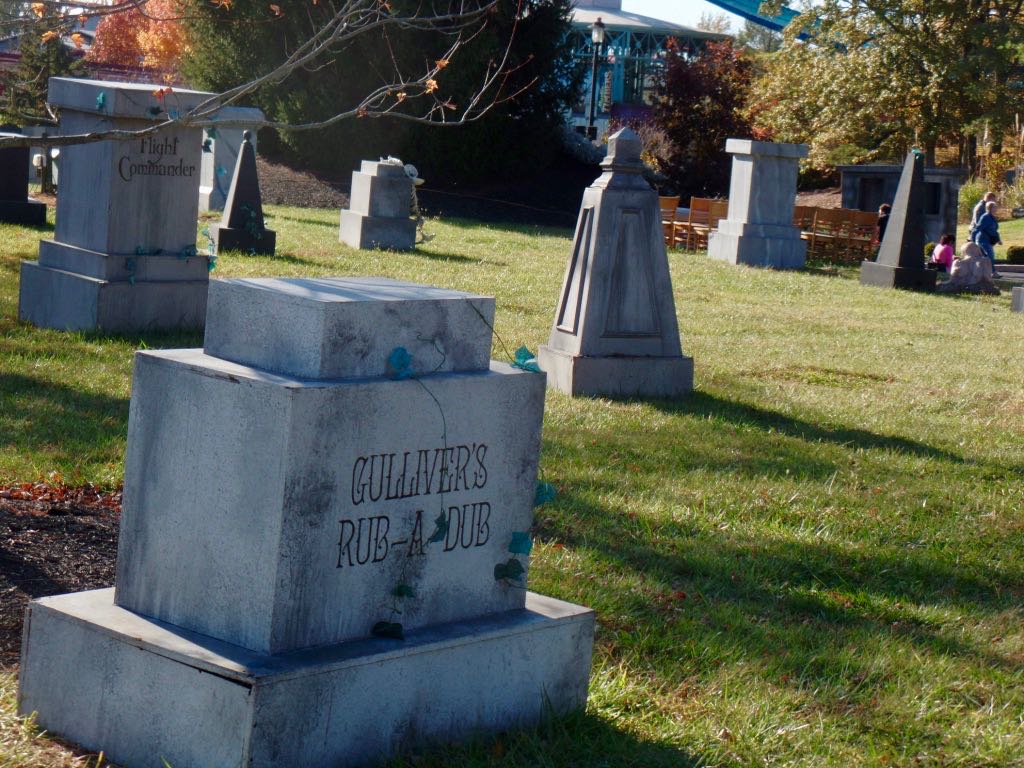 Gulliver's Rub-a-Dub was a small water raft ride in Hanna-Barbera Land, 1972-81. Flight Commander, 1990-95, was an Intamin Flight Trainer, a ride that sounds like the Satellite Jet seen at, like, Lakeside Park. Wikipedia says the ride was ``reportedly'' relocated to Flamingo Land in England where it operated as ``Top Gun'' until 2004. 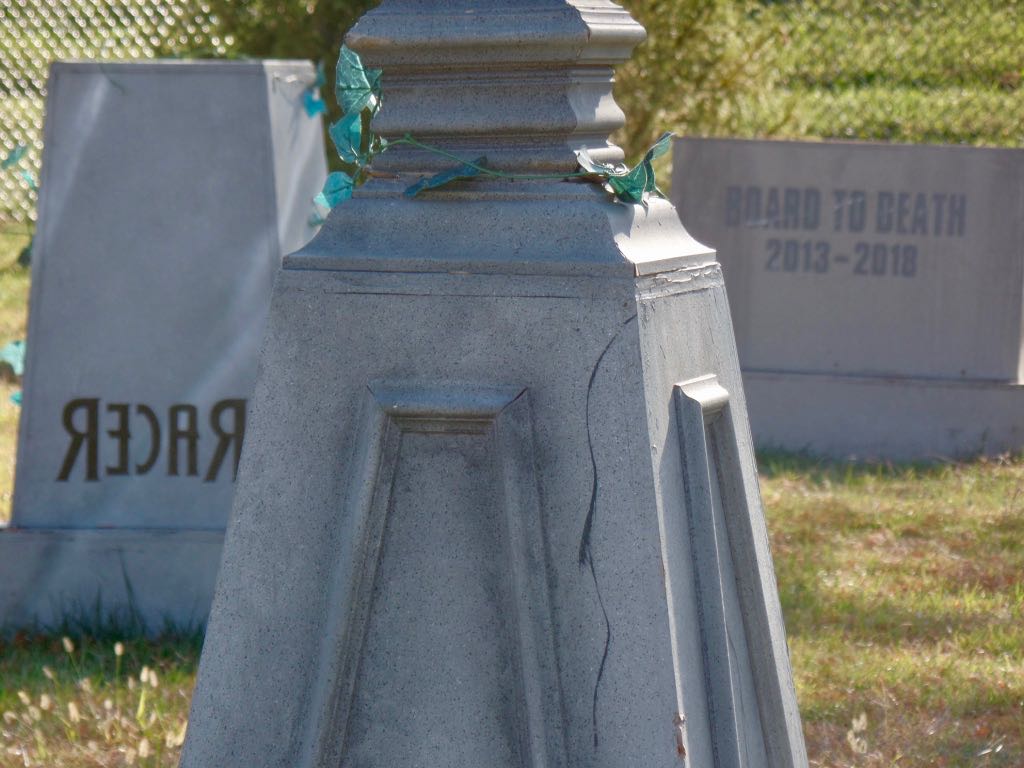 The backwards Racer here refers to how they used to run one train of the Racer roller coaster facing backwards, a common stunt done to give older wooden racing coasters a refresh. Cedar Fair, when they took over the park, shut that down because Cedar Fair has some phobia about rides that go backwards. No idea what Board to Death was but we surmise it was a Halloweekends attration. 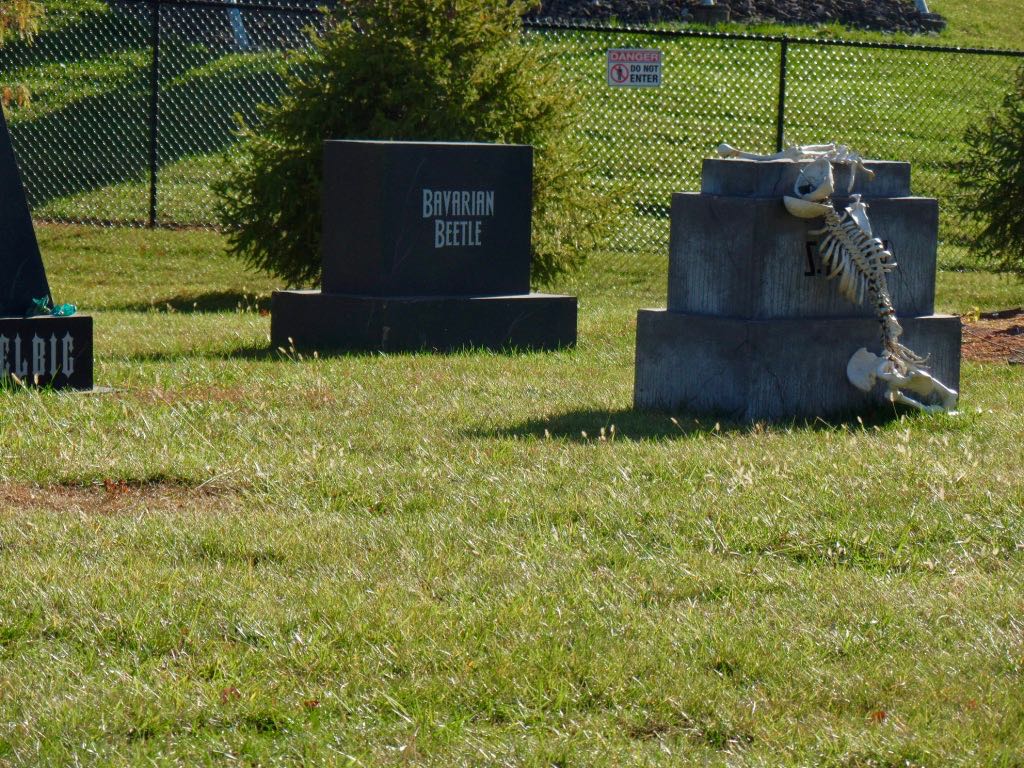 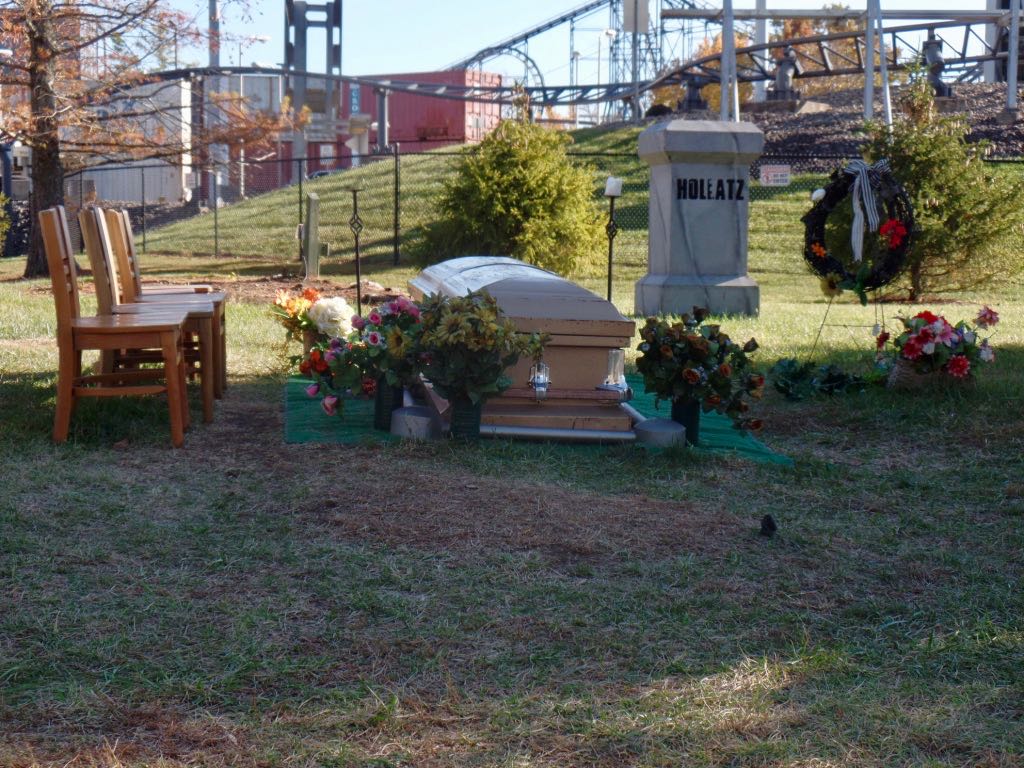 A coffin and chairs set up at the end of the gravesite. We wondered if they were going to have a funeral service for the Vortex, but heard nothing about it and saw nothing to suggest the did. It appears to just be part of the decor of Halloweekends at Kings Island. 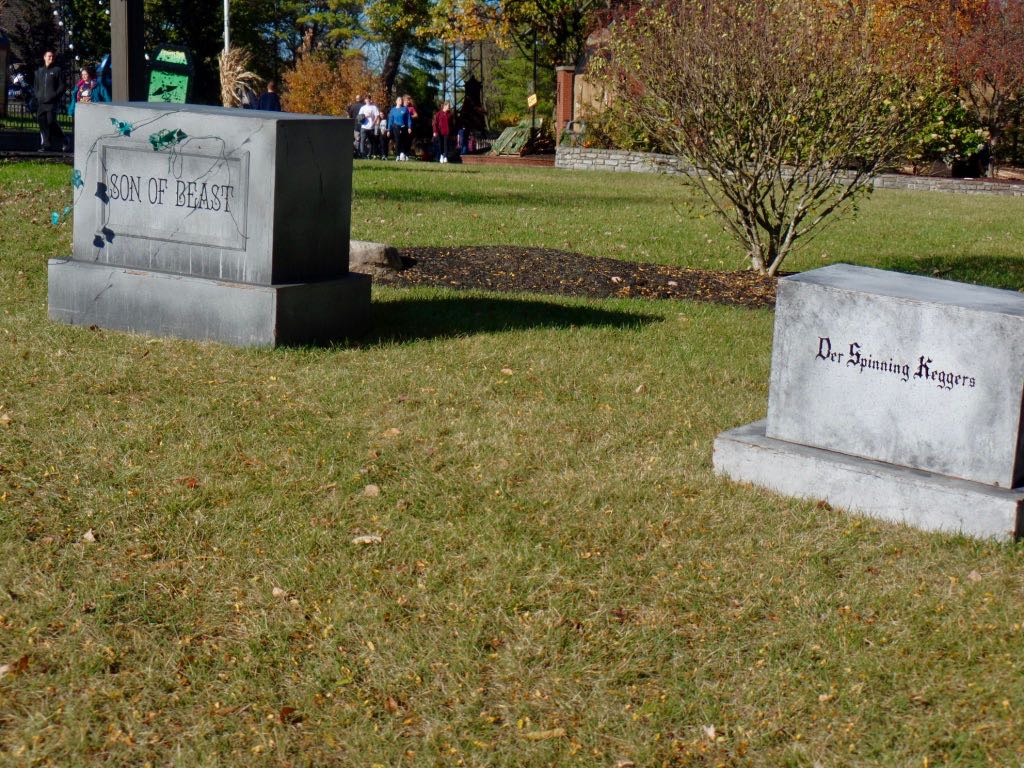 Son of Beast was the short-lived but infamous attempt to do a wooden roller coaster with a loop. It was torn down ---

bunny_hugger has a piece of its track --- and there's an ``eternal flame'' marking its location near what's now Banshee. Der Spinning Keggers was a spinning-barrels ride the park had from 1972 to 1989. The barrels were labelled as scotch, gin, or rum, says Wikipedia.

Trivia: Under college president Merrill Edwards Gates (1882 - 1890) Rutgers College raised admissions standards to the point that as many as one-quarter of applicants were denied. Source: Rutgers: A Bicentennial History, Richard P McCormick.