I'll be so blue just thinking about you

We set out for

bunny_hugger's parents' house after two weeks almost without setting foot into another building. That ``almost'' covers that

The important thing is that while not everything was unloaded, I was able to ensconce myself upstairs for a video chat with my family. We'd wanted to do some gettogether for Christmas and somehow ``Christmas Eve, 2 pm'' came out as least bad for everyone. This was the first time we'd chatted since Thanksgiving and it went about as I'd expected, an hour with all the members of the family. My dad observed how nice it was that, for the most part, parents kept hold of the computers so that there was not too much of one of the kids grabbing the phone and swinging it around while pointing at a ceiling fan. Swirling pictures of ceiling fans has been the central motif of our family chats so far.

bunny_hugger was not convinced that there'd been any progress on our family video chat etiquette. Well. I was surprised that the chat only ran an hour or so before breaking up. Some of my siblings were going to their in-laws who, I hope, were being as good about quarantine as we had been. I did not take my laptop around for a tour of

bunny_hugger's parents' home and would have resisted the request if I'd gotten it.

One strange thing about this visit is we weren't assigned to the guest room and the ``most comfortable air mattress in the world'' for our bedroom. Since her brother wasn't coming home, we could use his preserved bedroom, the way we do when staying overnight at Easter. It's a much warmer room. We forgot that we need to bring some extra pillows, though. We're losing our expertise at travelling.

One odd little tradition not lost:

bunny_hugger's father wanted to watch a video for baffling reasons. In this case, an episode of Rocky Jones, Space Ranger, which you'll remember from two episodes of Mystery Science Theater 3000. (It's the one where Crow growls, ``You let a man named Winky fool you?'') It's a pretty good early-50s science fiction show, really, although I'm not sure why he wanted us to see this particular adventure --- and only the first episode of the three-episode adventure.

After eating a lot of chips and dips and cookies and pecans and all we had dinner, a fondue, which I never get enough of. I did try mightily, though, and spent a lot of the night feeling like a sausage about to burst. It was great but I did worry I was undoing ten months' worth of weight loss in a weekend. (I knew it wouldn't really be that bad, and in the end, it looks like over the whole weekend I gained only two pounds, which is not far off my usual fluctuations.)

bunny_hugger's father wanted to go to bed early, so we chose not to resume our Mice and Mystics campaign, suspended since the 14th of March. Instead we played a game

bunny_hugger's brother had sent their mother, a Sherlock Holmes-based board game that, he pointed out, could be played by her alone if she wanted to flex her mystery-solving muscles. The game gives you a book and map of London and set of dozens of places one might go for clues. Each place, which you can visit in any order, has some information about the case. The challenge: figure out the solution in fewer steps than Sherlock Holmes needs. (At the end of a round there's some narrative in which Holmes explains how he figured it out.)

We had a fair time of it, to start, but started to get very tired of it. The central problem is we understood that there was something important about Holmes's client's family history, but we couldn't figure any leads that would let us get to that. Also, it seemed that everyone we talked to wanted to talk to us about what seemed like an unrelated case, to the point that we all observed that's a heck of a plot rail we're being shoved to.

And we spent a lot of time chewing this all over. It ended up taking at least as long that first night as setting up and playing Mice and Mystics would have. And we didn't finish! We had to go back and play it for several more hours on Christmas night. In the end, we took humiliatingly more clues than Holmes needed. We were right about what the solution had to be, particularly in the importance of the family secret and roughly what it might be. And, in retrospect, we were able to find the lead that would have get at the family secret, so the game was fair enough. We just didn't know how to read the clues yet.

bunny_hugger's mother feels more confident about the game than she ever did before we played. And we learn that it's a game which was popular and well-regarded in the 80s, and got a bunch of sequels then. And a modern reprint and sequels too. It's also one that would very easily adapt to our playing online; all we need is to buy a second set (or photocopy its booklets). It opens up possibilities to play later.

Through all this, we were up incredibly late, getting to bed after 3 am. We're past the age where we rise for Christmas at dawn but this was going to challenge us to be ready at noon.

Was that not enough Christmas for you? I think you'd like a little more Bronner's-grade Christmas Wonderland, as seen in November 2019: 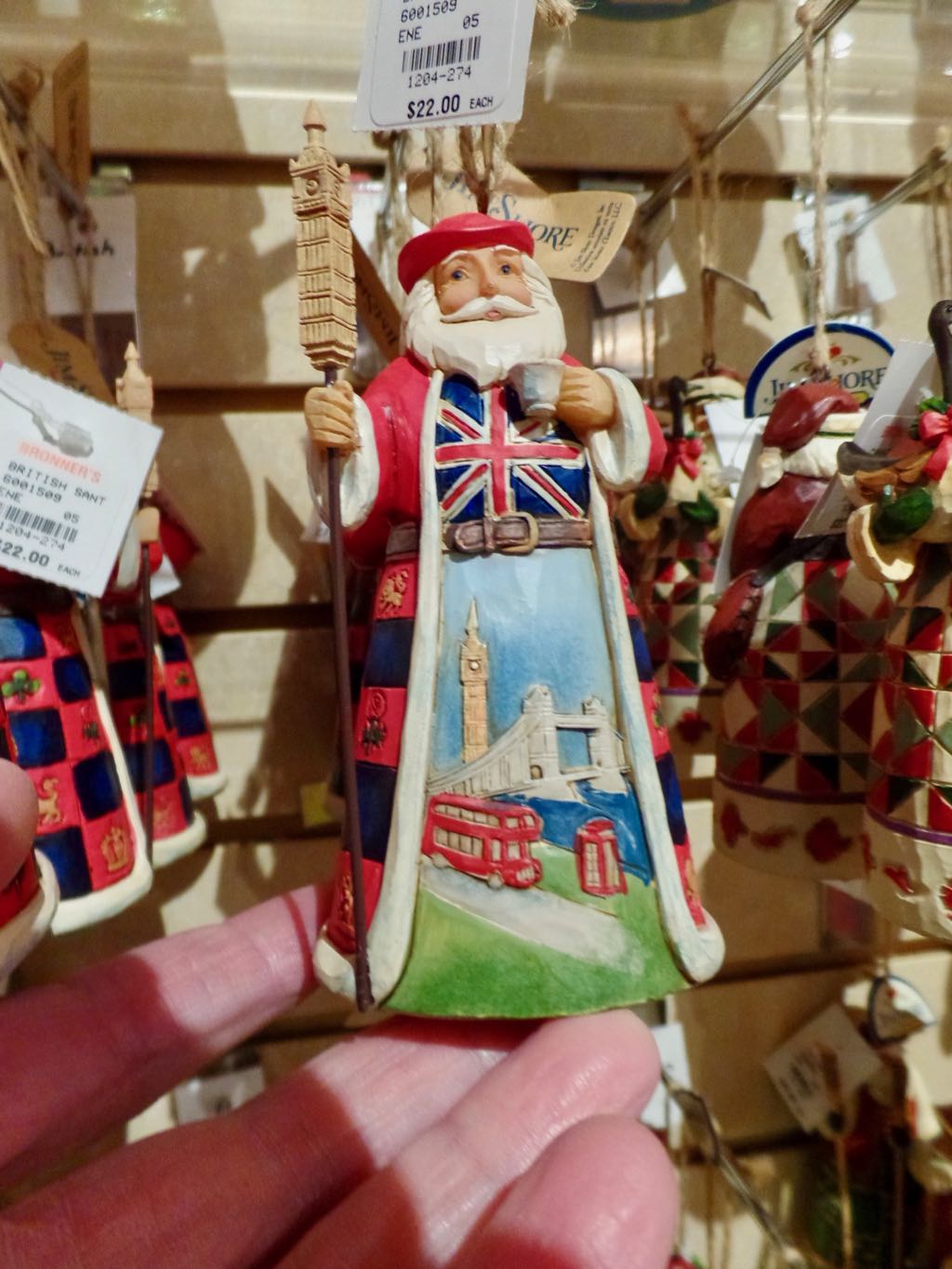 OK, that Santa Claus with the Mount Rushmore thing was a bit daft but here's a Jim Shore carved ornament that's more sensible: Santa Claus showing off how heckin' London he is. ... I don't know, it's souvenirs, what are you doing to do? 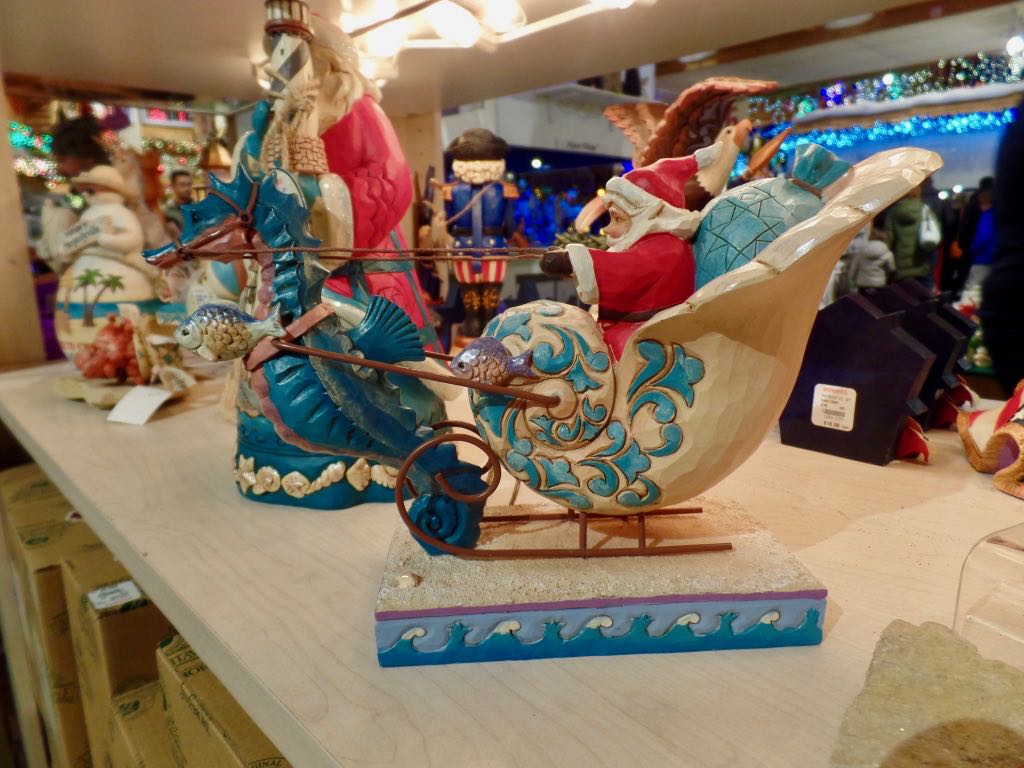 More of those Jim Shore carvings: Santa Claus but underwater. For everyone who was complaining that the Flintstones Christmas didn't make sense. 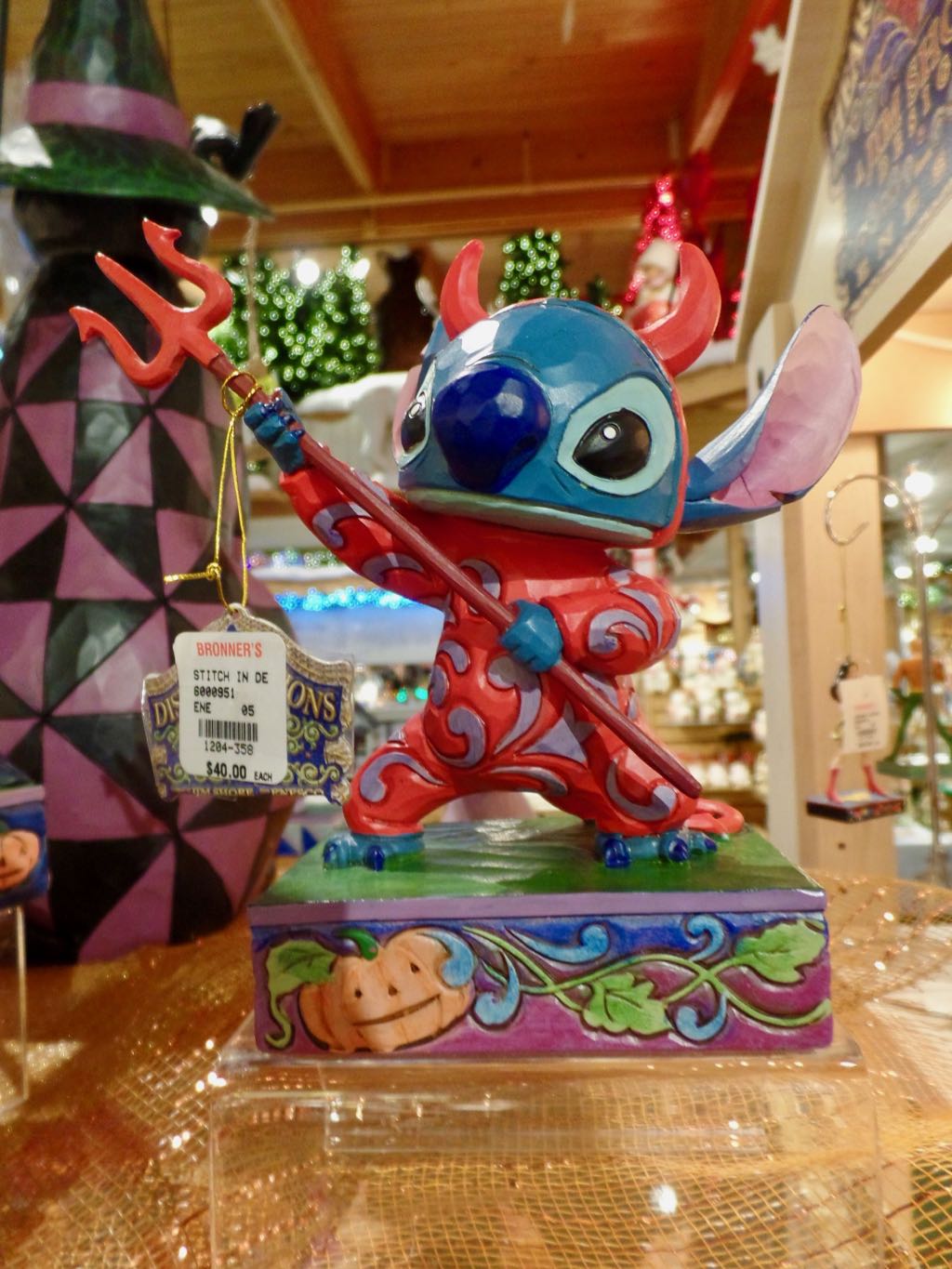 And here's a great Devil Stitch figure we didn't buy because it's 40 dollars and we don't need it. 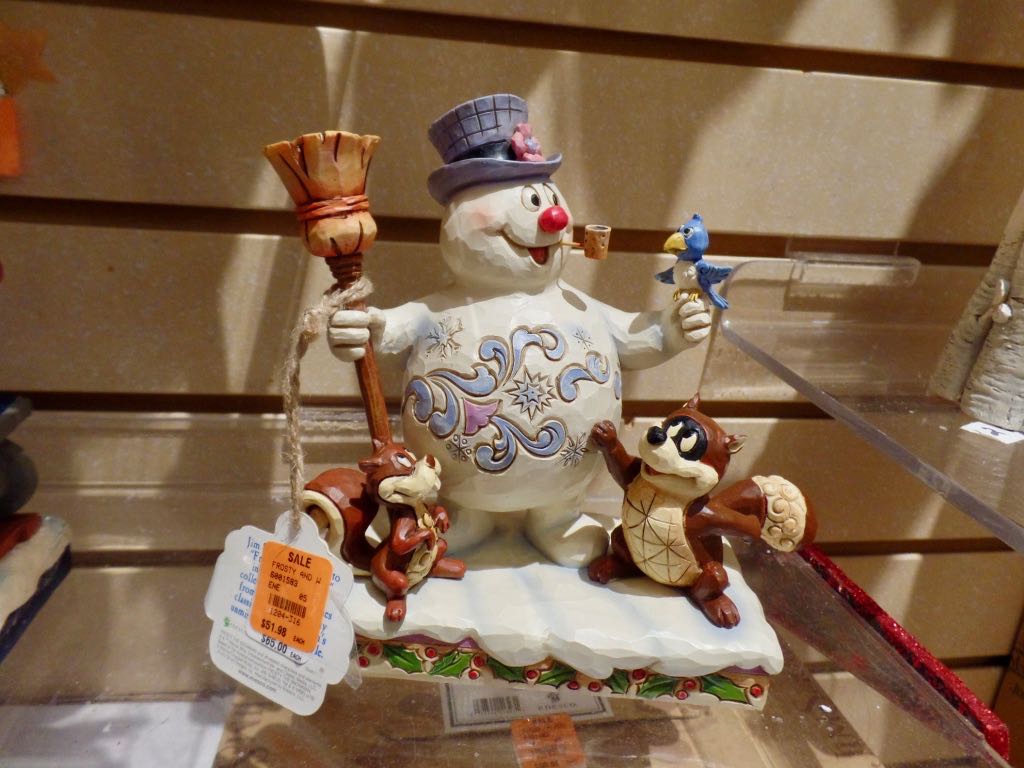 Remember that great scene in Frosty the Snowman with the raccoon? (Raccoons are among the animals that gather firewood for Karen.) 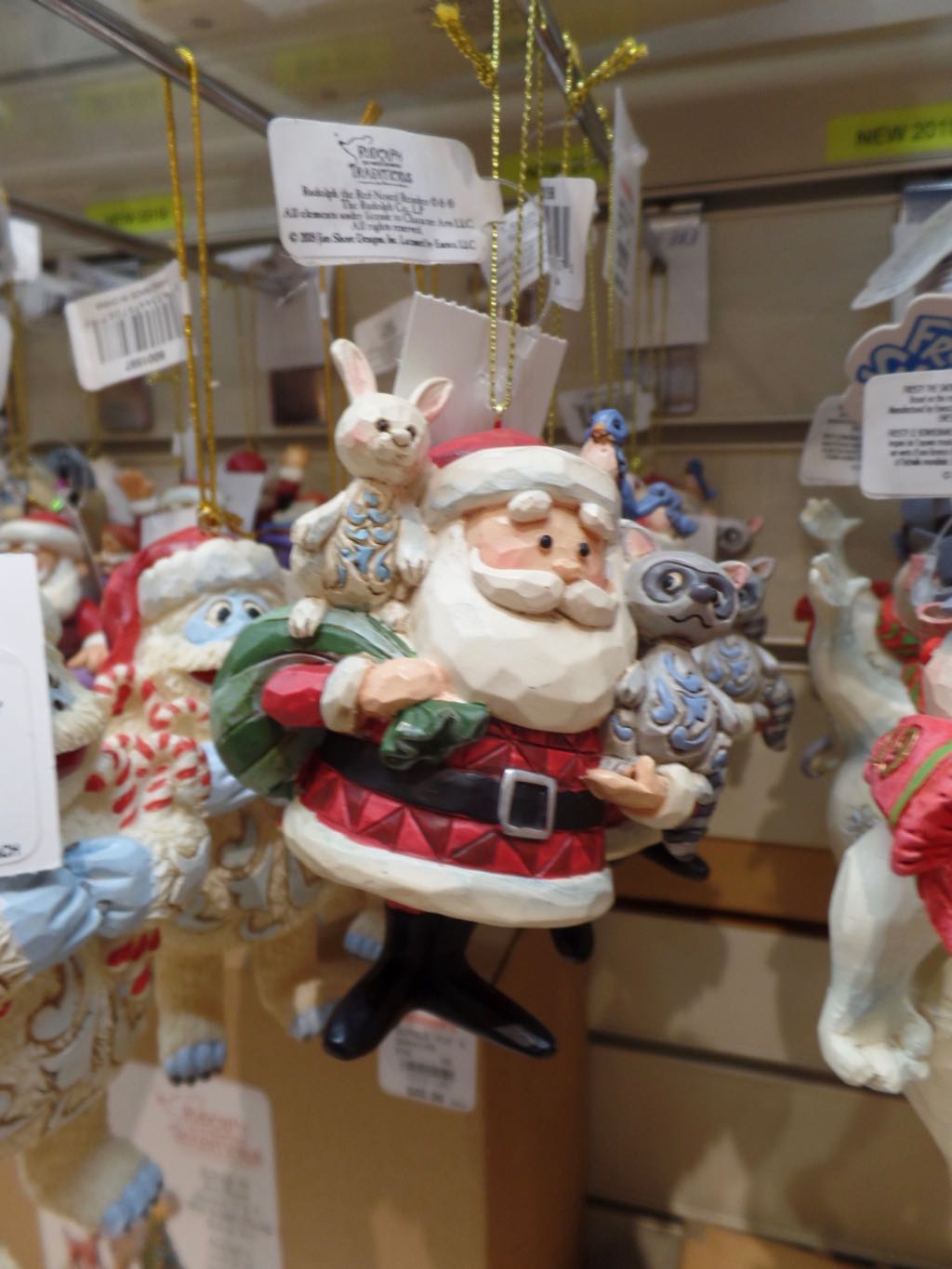 More figures based on the Rankin/Bass Santa Claus, again holding up the raccoons that even I have to admit are minor parts of the story. 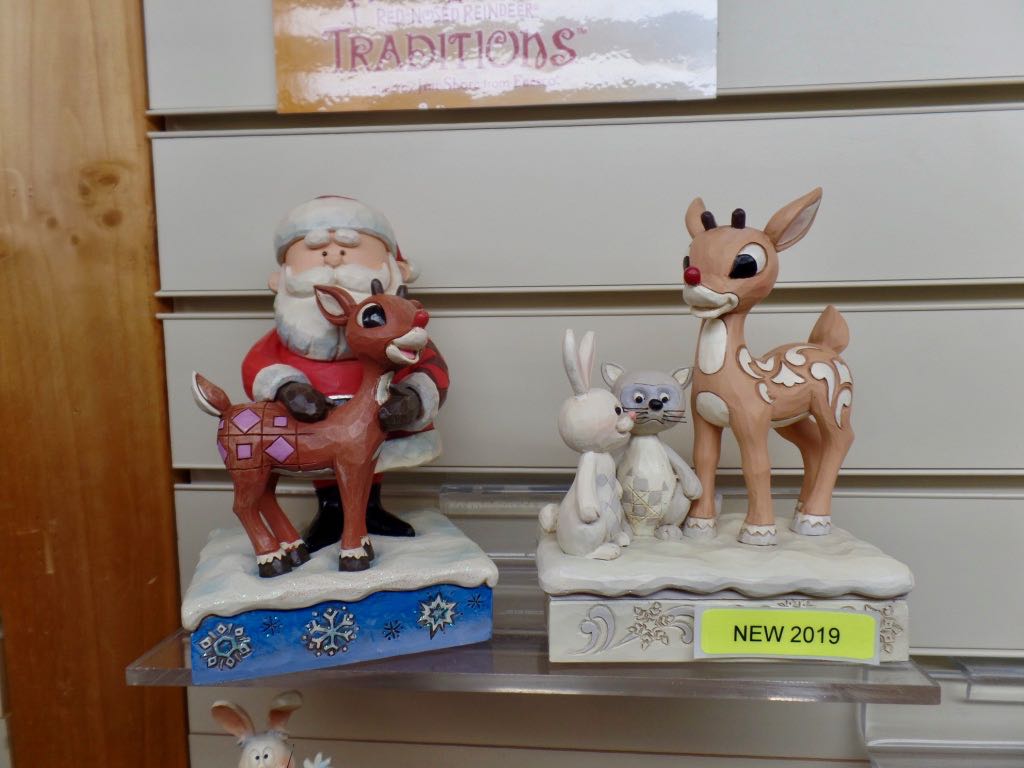 Jim Shore carved-wood figures based on the Rudolph the Red-Nosed Reindeer special. 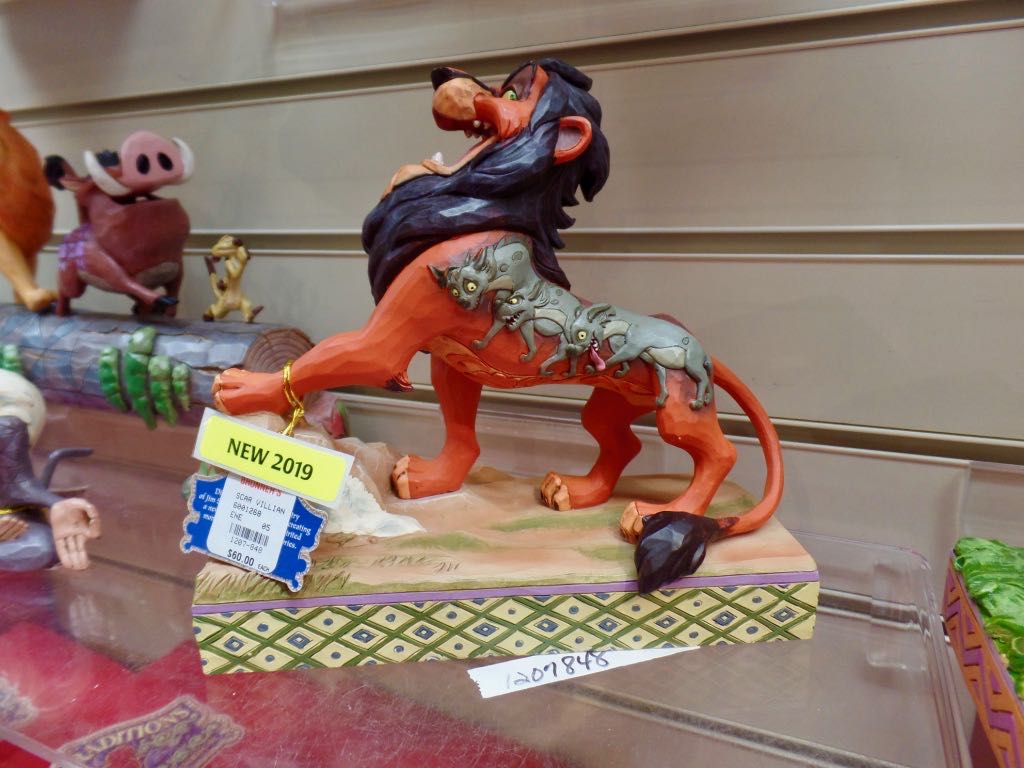 And then here's just a wildcard. Great Scar-with-the-hyenas figure and one that evokes carousel carvings, where a something like the hyenas would be ... well, three hyenas would be a surprise but a secondary figure would be reasonable anyway. 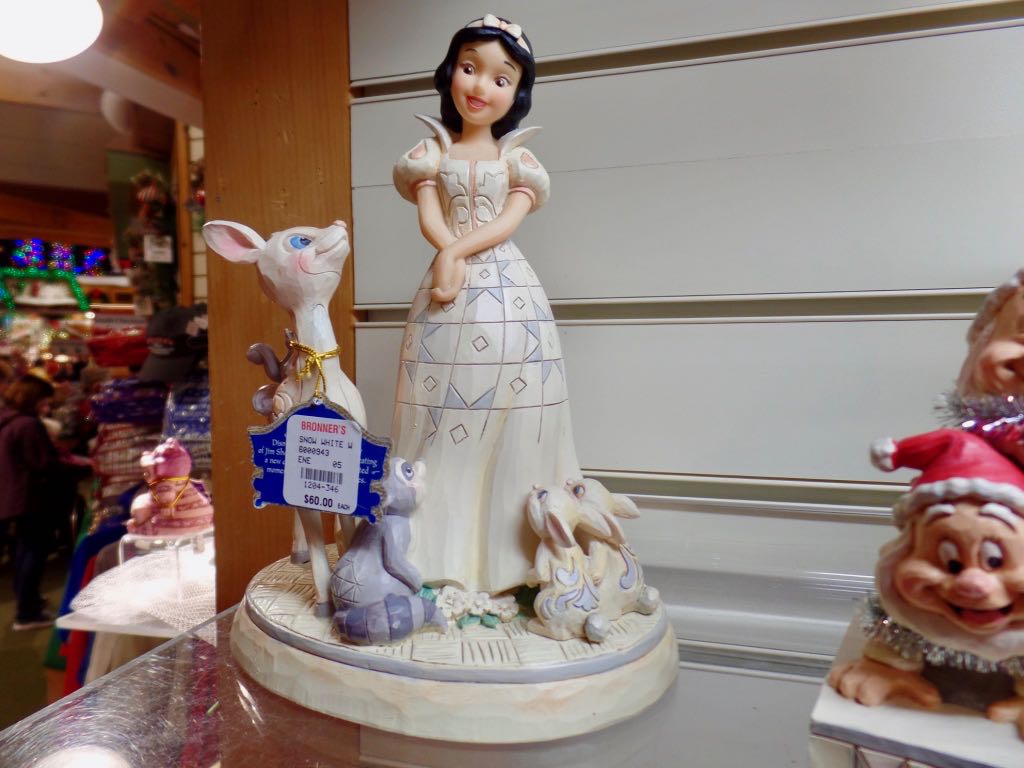 At this point I have to suppose Jim Shore really likes raccoons because I sure couldn't tell you if there's a raccoon in Disney Snow White. 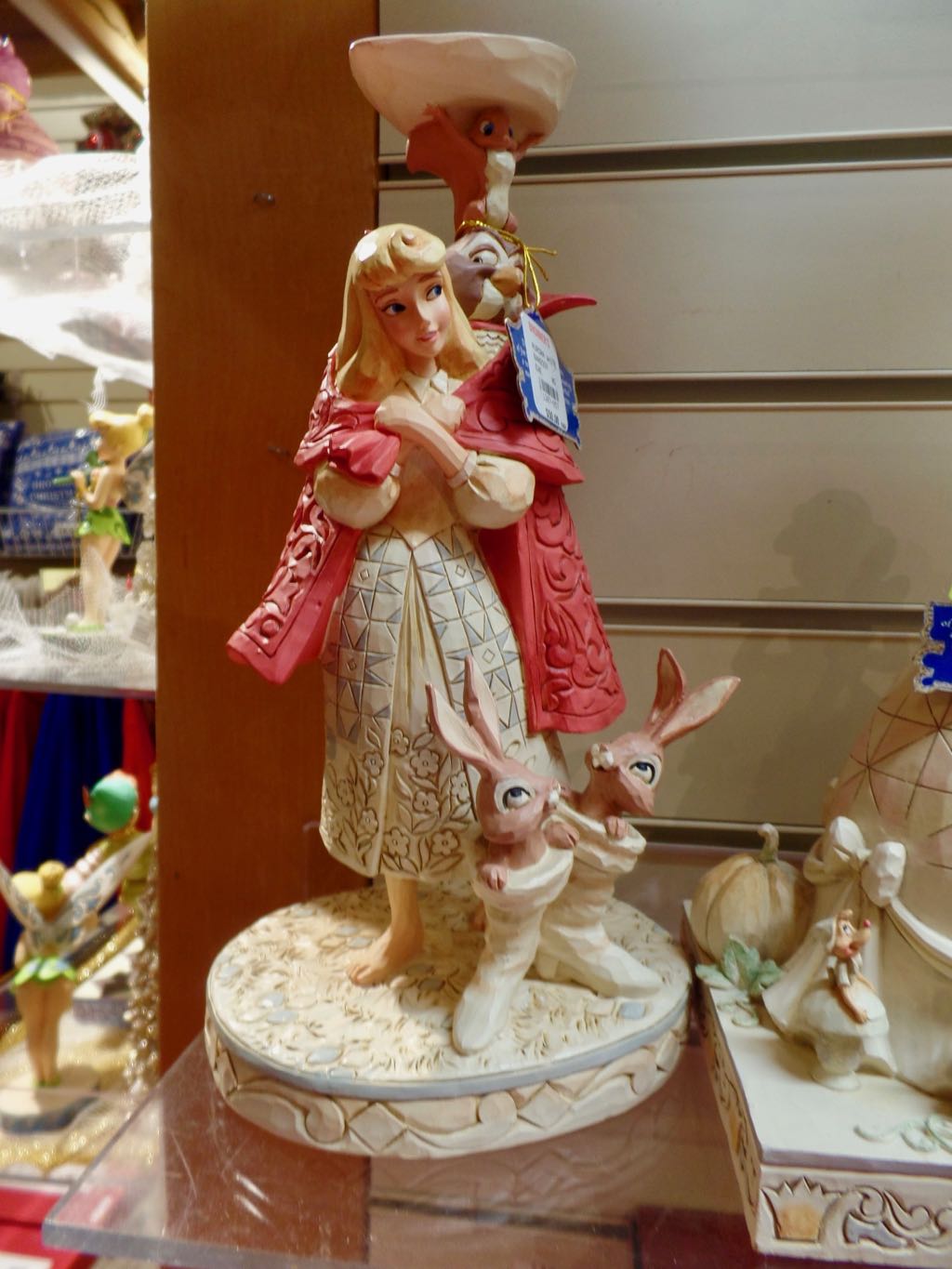 Um ... I ... this is embarrassing. I'm not sure. Maybe she's Tangled, from Disney's Tangled? Not sure. Cute rabbits. 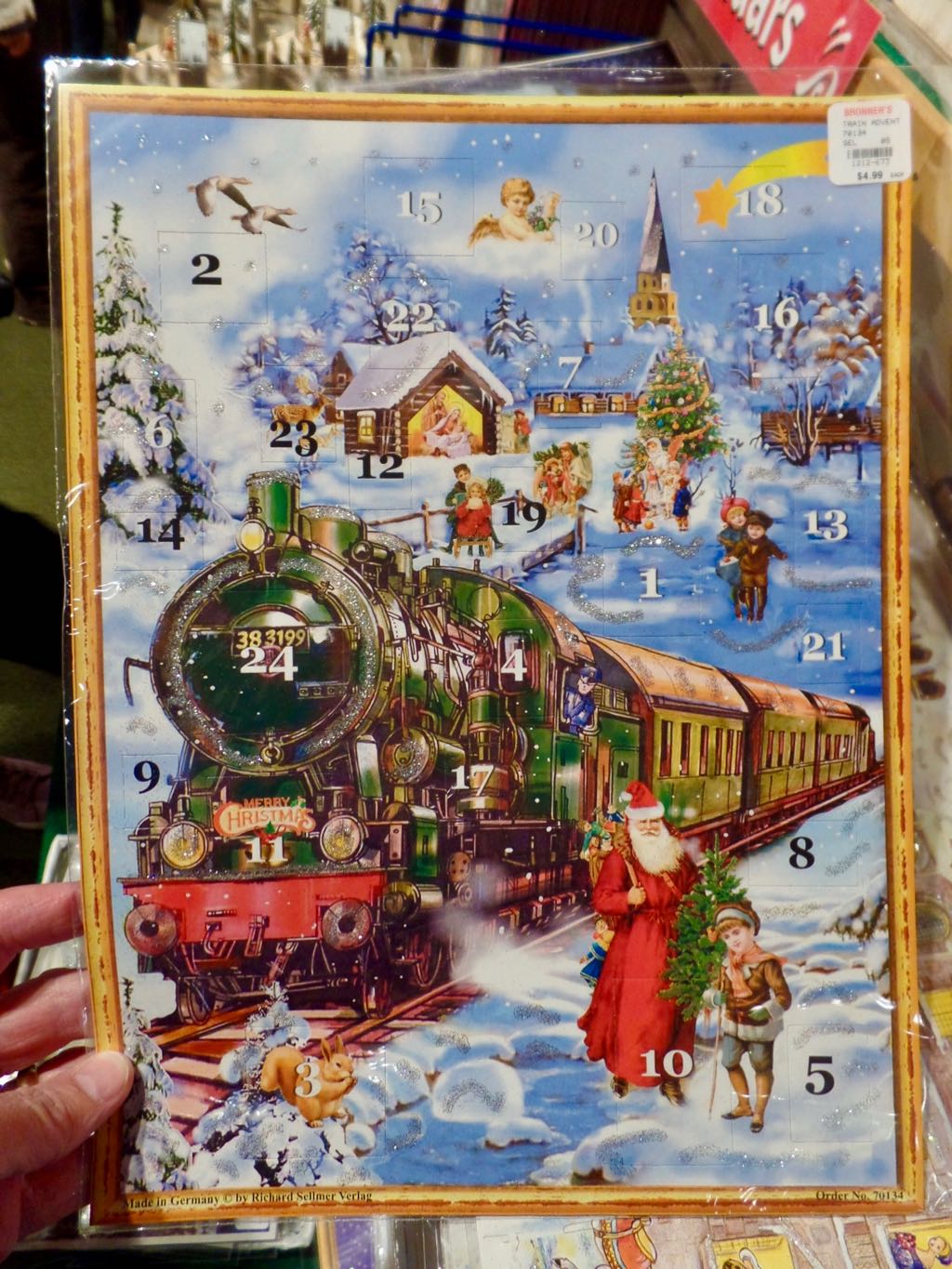 Looking over Advent calendars! ... We don't need new Advent calendars. Still, great rabbit there for day 3, and great, exciting choices of perspective for all the human figures here. 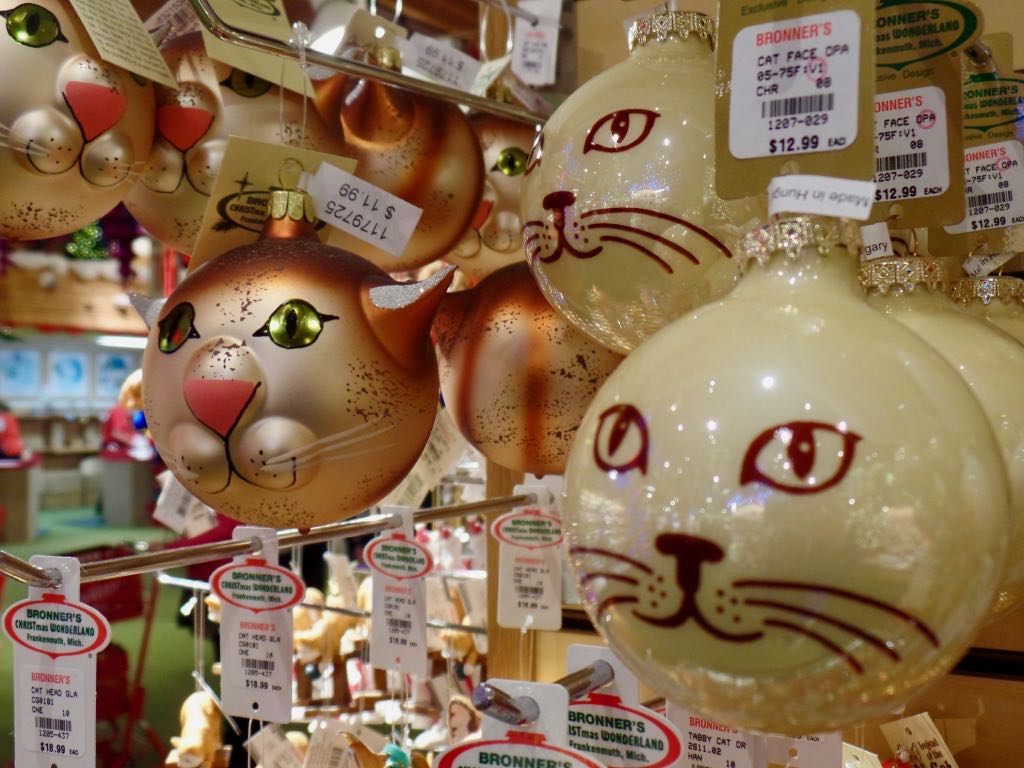 I offer this shelf full of cat-face ornaments to plague you when you're trying to sleep. Enjoy! 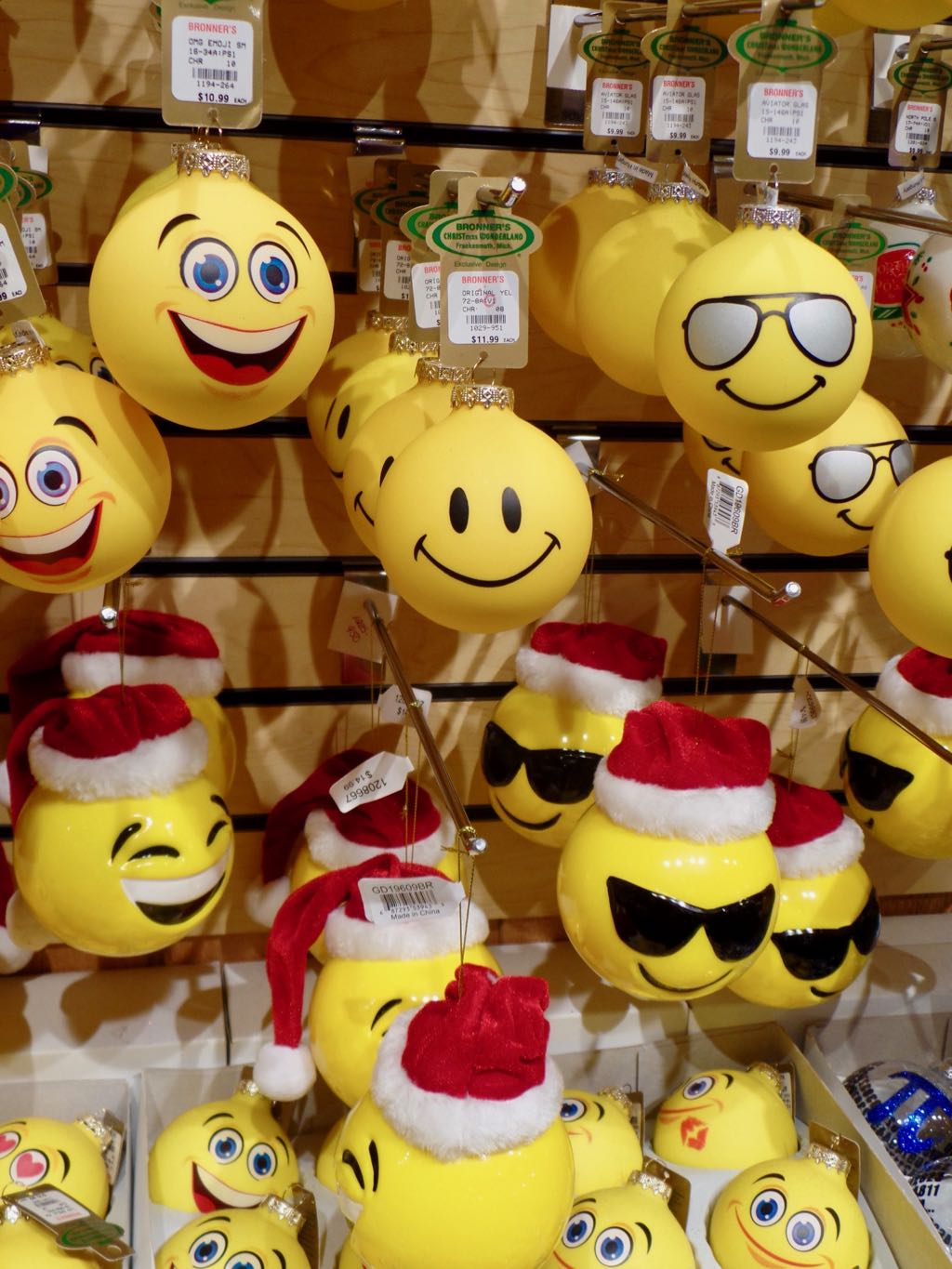 Hey, it's a bundle of Pac-Man ornaments! That's great! Neat to see him branching out to a feeling besides ``eating''.

PPS: Yes, there are raccoons in Disney's Snow White even though that doesn't seem to make geographic sense. They're sweet to see, anyway.