Decorations of red on a green Christmas tree

We woke up late, as we had foretold, Christmas morning, and put on our kigurumis. I put on my red panda;

bunny_hugger put on Stitch, so we weren't quite the matched pair. Breakfast/lunch was scrambled eggs, made by

bunny_hugger's father, who's a scrambled-eggs specialist. I still felt kind of full from the night before but, not to worry. I could brave it. It had snowed overnight. Not much; maybe a quarter-inch, but enough to be an orderly white Christmas, the kind where the sidewalks clear themselves.

The Christmas gift-opening would wait a bit, so that we could do it on a virtual chat with

bunny_hugger's brother and his partner, in Brooklyn. It would be a bit lopsided, though. The packages that

bunny_hugger and I had sent, a week befor Christmas, hadn't yet arrived; they were waiting somewhere in the Brooklyn sorting facility. This even though a package sent to my parents in Charleston the same day had arrived at the start of the week. Worse, the package that

bunny_hugger's parents had sent, somewhere around the 9th(?) of December, was also languishing in no known location.

bunny_hugger's mother complained it was sabotage, mail to Democratic states being needlessly delayed and, you know, any other administration I'd call that a harmless fantasy of paranoia.

So it would be lopsided to start with. And then worsened because of some confusion with

bunny_hugger's wishlist. She's moved off of an Amazon wishlist, on the correct grounds that people who are not Jeff Bezos should get money too. The catch is that since it's not integrated into Amazon, you have to manually click when you buy something off the wishlist. She reminded her father that he had to do this, and reminded her brother that he had to check with their father. So you see where this is going. Her brother swears their father said he was good about this ``now'', and her father swears he checked things off the same day he bought them, and that her brother must have bought stuff in the couple-hours interim.

And I'm more happy with the things I was able to give.

bunny_hugger's mother had insisted on not getting Christmas presents this year, on the grounds that the iPad Mini which

bunny_hugger gave her in spring counted. We were able to coax her into accepting a ``couple small extra things'' and used that as grounds to just give about what we would have otherwise. This included a jigsaw puzzle based on a Charley Harper poster for Michigan's own Isle Royale National Park. It's a thousand-piece puzzle, and she's feeling like she's not up to more than like 750-piece puzzles, but this was the nearest I could get and I hope the extra pieces won't be too bad. Also given: three pounds of snacks from The Peanut Shop, a peanut roastery downtown. Two pounds of that are Capital City mix, a blend that we've liked in the past. One pound of that was ... uh ... I'm going to say roasted cashews that I'd ment to get as a quarantine snack for ourselves. But the shop packed everything in three identical one-pound boxes, sealed, and unlabelled. I didn't want to open them and experiment, so converted them all into some food gifts that were quite well-received.

bunny_hugger tried to give her father: a CD burn of his Pat Benatar album, Crimes of Passion. I'd given him the vinyl last year(?), and I'd assumed he would appreciate the physical object and maybe buy the album on iTunes. I should have known better. He asked

bunny_hugger to rip it to CD and she agreed, but that's also a tedious process. She did decide to finally do it, in some of our quarantine period. But we hit the problem that our Mac laptops are all too new to come with CDs. I'd been planning to buy a SuperDrive after Christmas --- I have a $50 certificate from Best Buy just waiting for productive use --- but this was before Christmas.

So how did this CD exist? Through cleverness and deception, basically. The day before

bunny_hugger casually asked her father if he still had that external SuperDrive, because she needed to burn something she'd gotten to disc. Also, did he have any blank discs? He did, and after a few minutes' hiding came out with a blank disc and ``even better'', a jewel case. After her mother went to bed Christmas Eve,

bunny_hugger fussed around a bit with the ripped files, putting on the artist and track information and even a thumbnail of the album's cover, plugged in the SuperDrive and ... nothing.

Her laptop, with the new ... ThunderBolt(?) Or Whatever ... ports couldn't power the old-fashioned USB of the SuperDrive. I have old-fashioned USB ports, though, and my laptop was willing to talk with it. So she AirDropped the files to me and I imported them to my iTunes and burned the disc. Not noticing that one of the files was mis-labelled and not burned along with the album. So searching for where her father hid the CD-ROM blanks added another hour to an already late Christmas Eve. And it failed: we could not figure where the heck his discs were. Worse, he had offered, hours before, an extra disc if we needed it, and she said no, she didn't think we'd need one. And I suppressed my impulse to say we should definitely have a second just in case.

With failure all around us there was only one thing to do: give him the slightly-off disc, and explain what was wrong, and offer to burn a new one as soon as we could. He accepted the disc and the explanation and then swore it wasn't important, he didn't need that missing song. (``Prisoner of Love'', which is not the song you remember from that album, because that's the album with ``Treat Me Right'', ``You Better Run'', ``Never Wanna Leave You'', ``Hell is for Children'' and oh yeah ``Hit Me With Your Best Shot'' on it.) We finally coaxed him into allowing us to burn a new disc, and he could have his Pat Benatar album to listen to finally. Eventually; his CD player refused the disc the first time we put it in, but it accepted it the second time. It just feels a little too good for burned discs sometimes. (A common problem.)

... He did ask about ripping the other album, and we had to debate whether I had given him a second Pat Benatar album last year. After all this, I'm scared to go to our record piles and check.

We watched Scrooge, the Alastair Sim version of A Christmas Carol, as is our tradition. And as it was already past dark, both

bunny_hugger and I went for walks. It was rather cold --- the first days below freezing all season --- but we were ready with long underwear and the heavy jackets. It was a rare chance for

bunny_hugger to explore other sidewalk stamps for her blog, or to try to. I was ... less enthusiastic about walking in the cold, really, but also felt that given I'd eaten my own volume in dip over the preceding 36 hours I felt I had to. We walked separately, anyway, and it was neat to see and get a little bit familiar with a different town.

In the evening we resumed the Sherlock Holmes game, on the assumption that we were really close to cracking it. Three hours later we finally surrendered, going to the end mode --- answering sets of questions about the crime and the perpetrator --- which is a thing you can do, in principle, any time you feel like you have an answer. We picked the wrong perpetrator, and between that and the enormous number of leads we followed, ended up with a negative score. I hope there's a mercy rule that you can't actually score below zero, but that's what we earned. Tch. 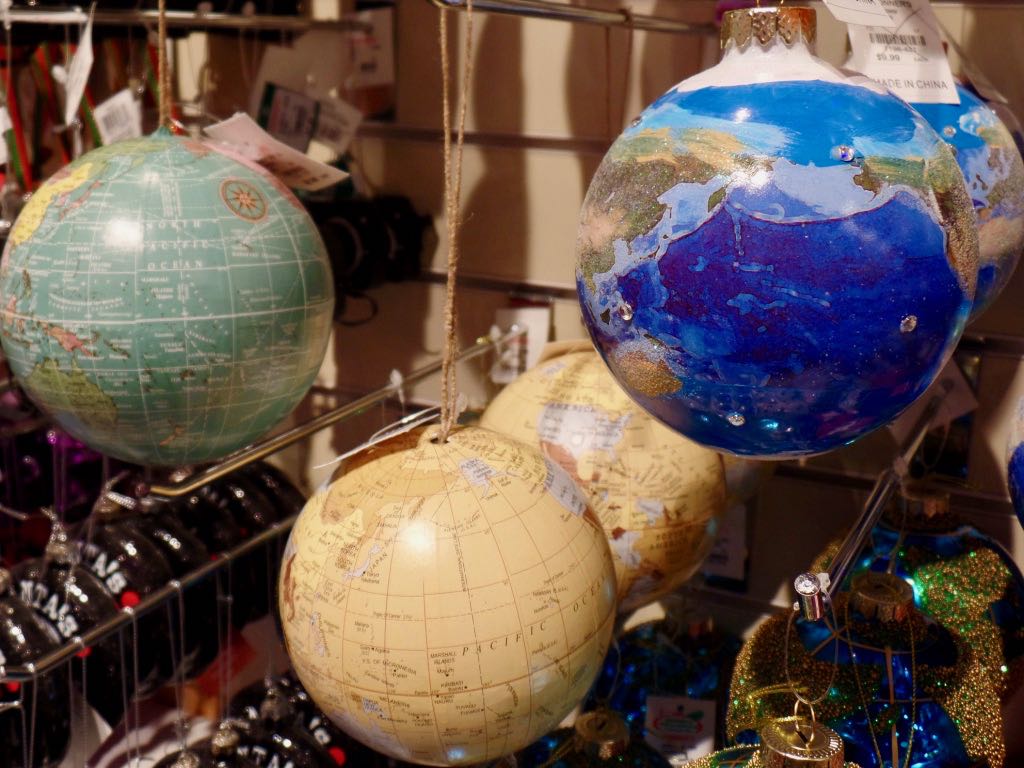 Some globe ornaments, for your friend who's into geography or who fantasizes about being the size of Jupiter. You know that friend. 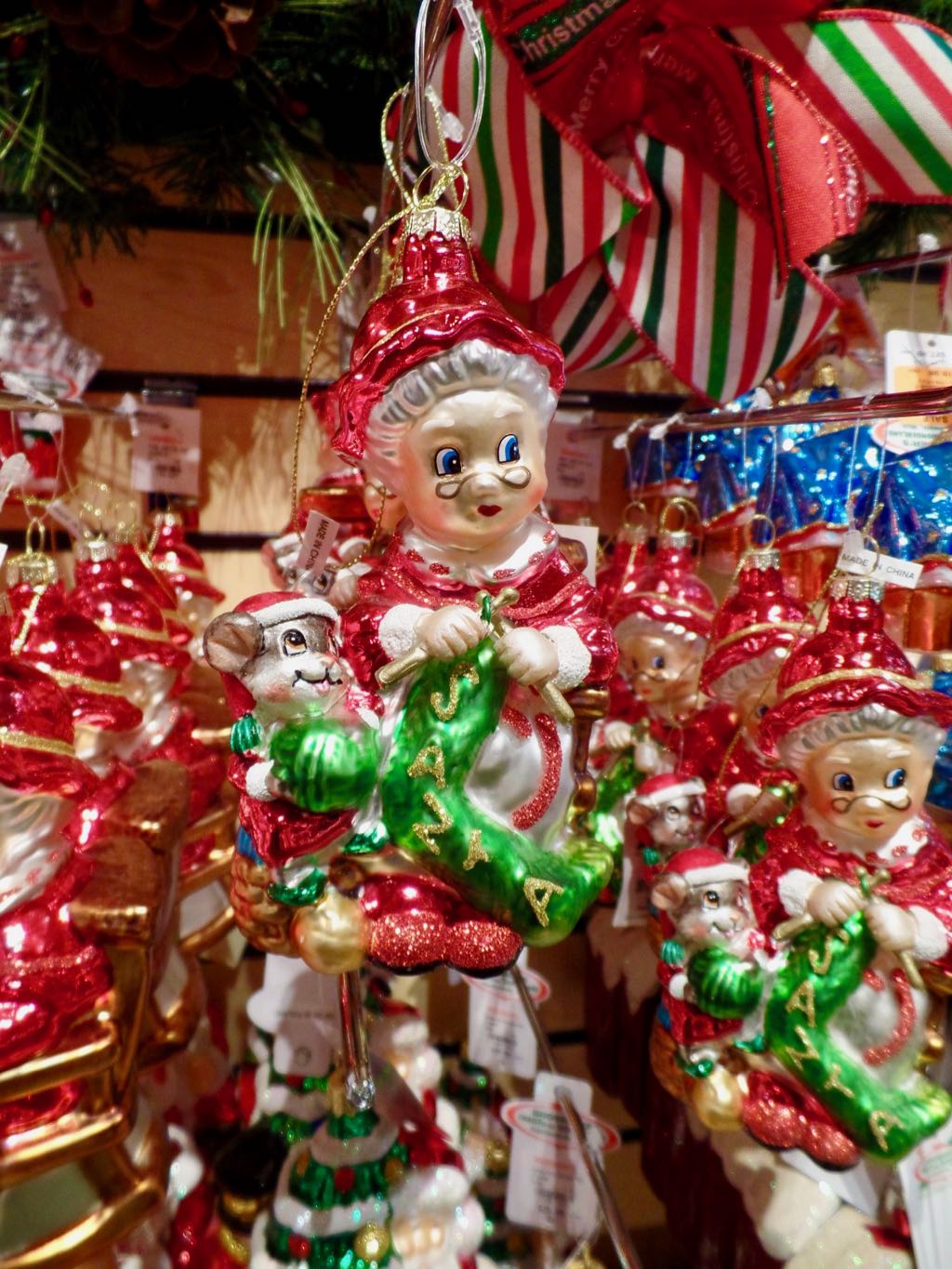 Here's Mrs Claus and a Christmas Mouse for all those B-level Christmas songs from the 50s that you don't quite hear enough on the Christmas music channel. 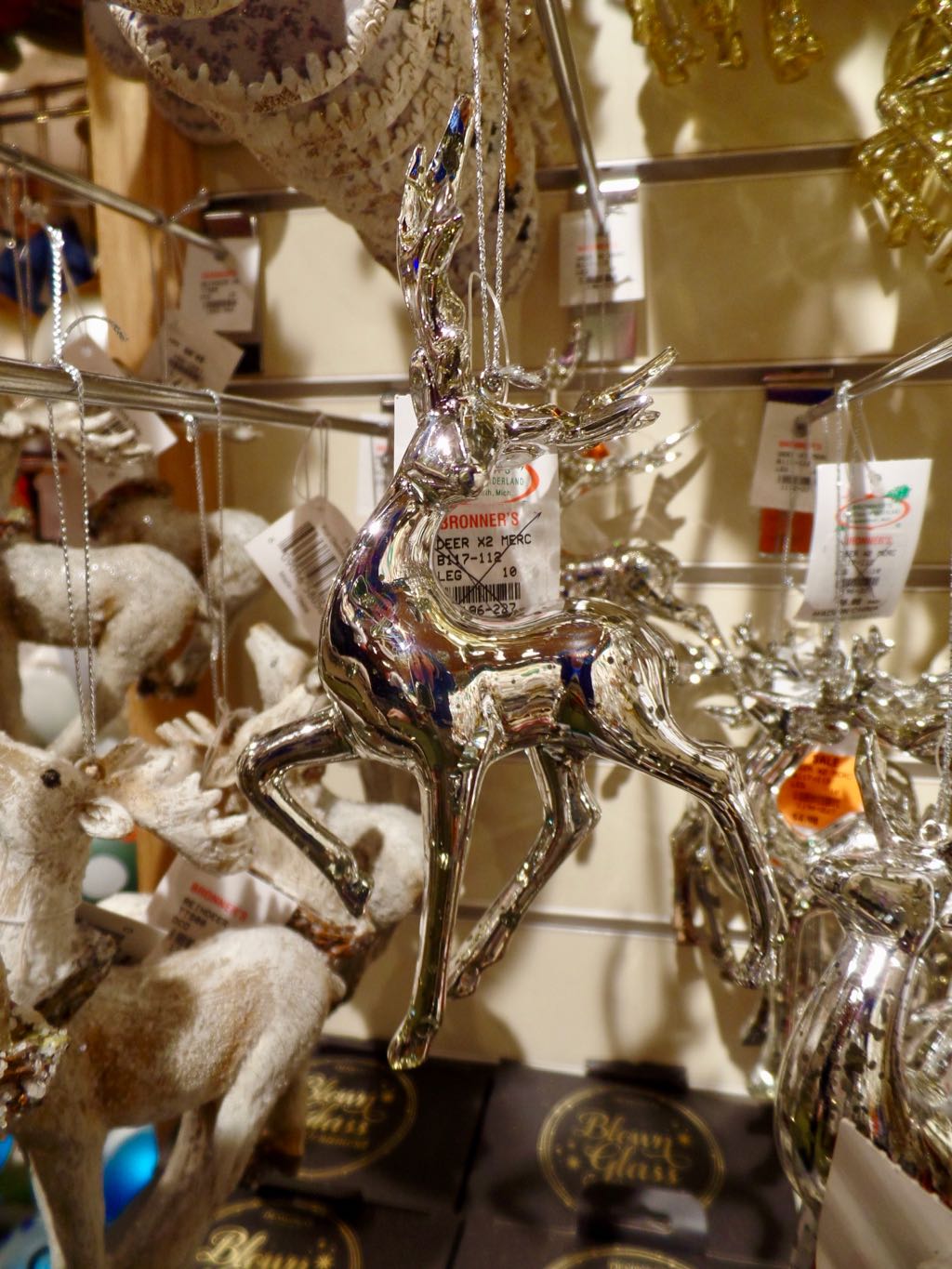 Here's your liquid metal reindeer ornament from The Year The T-1000 Saved Christmas. 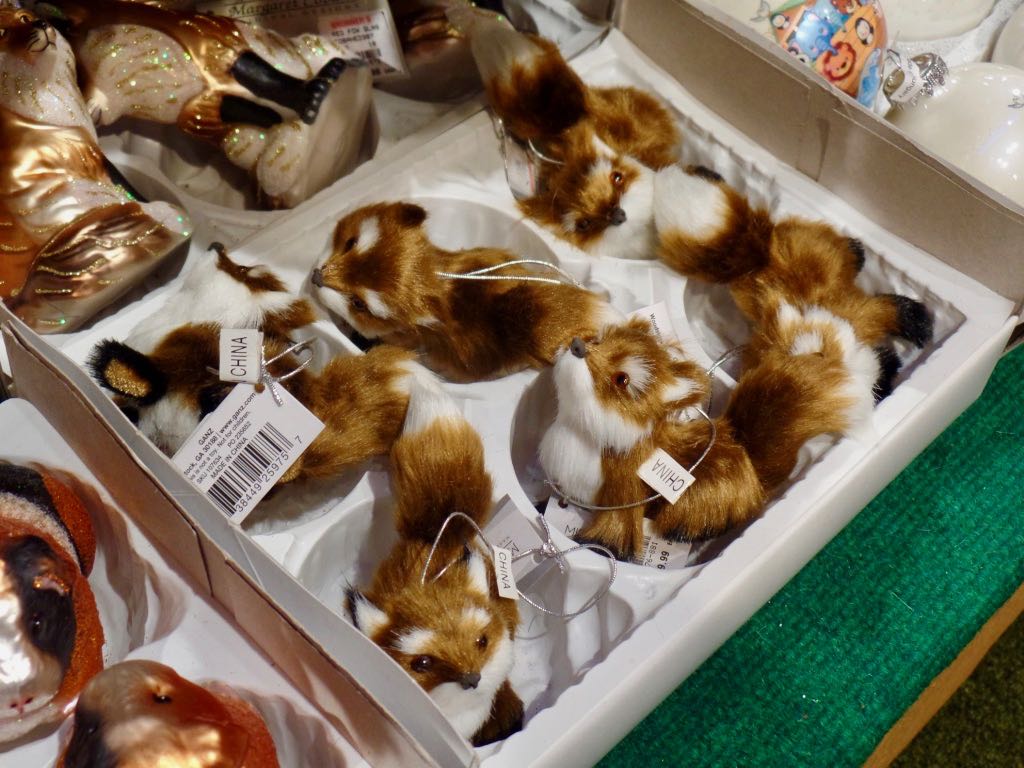 And here's the fox box, a box of foxes. 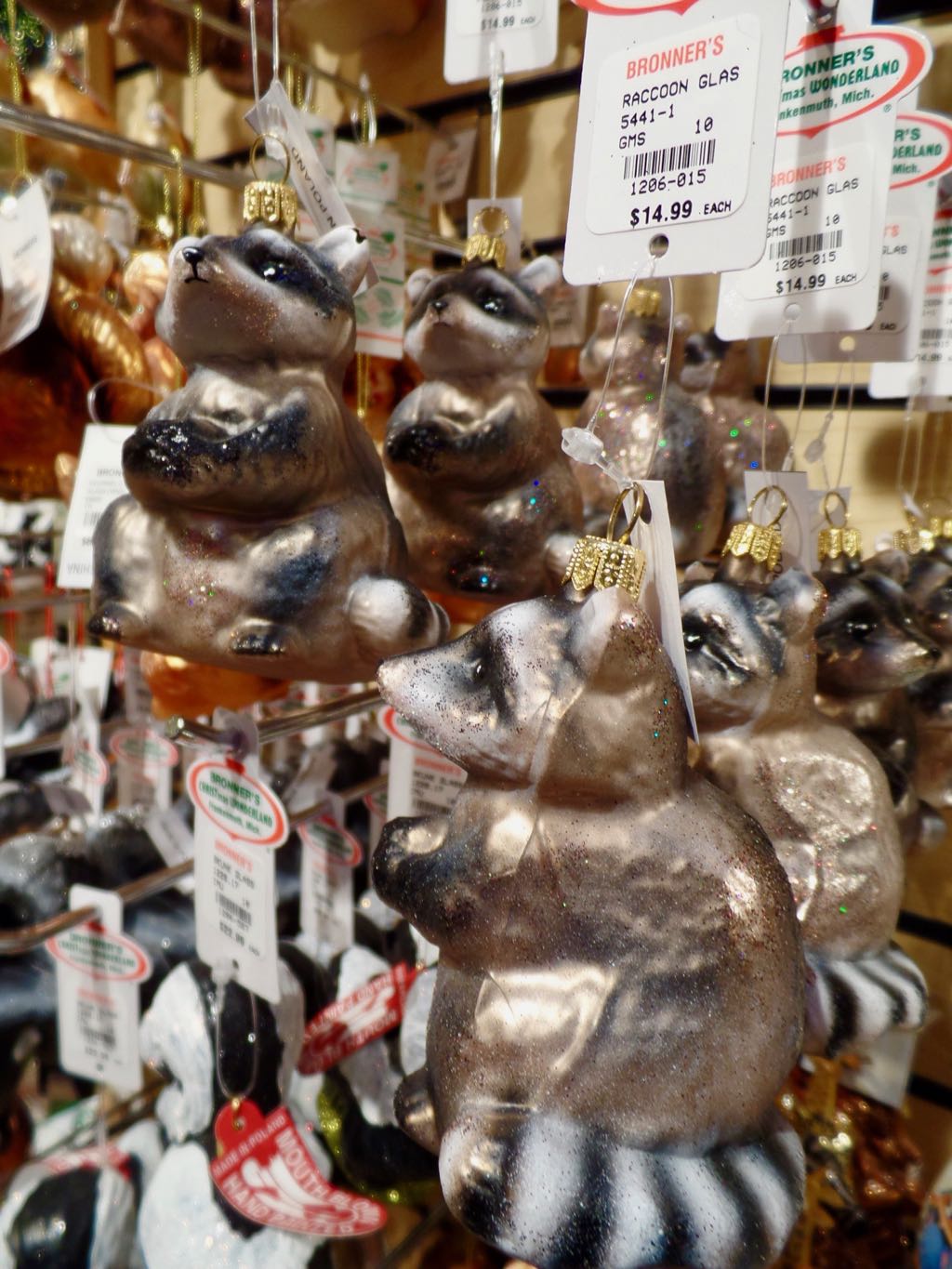 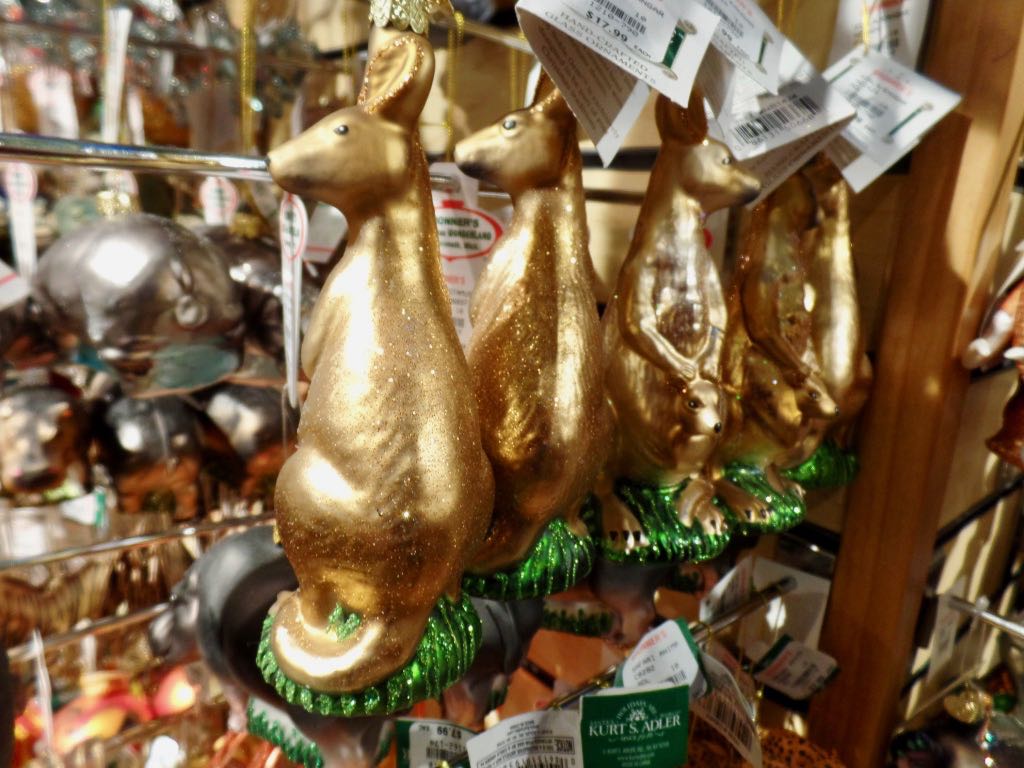 And then your basic golden kangaroo, with joey because how else are you going to know it's a kangaroo? 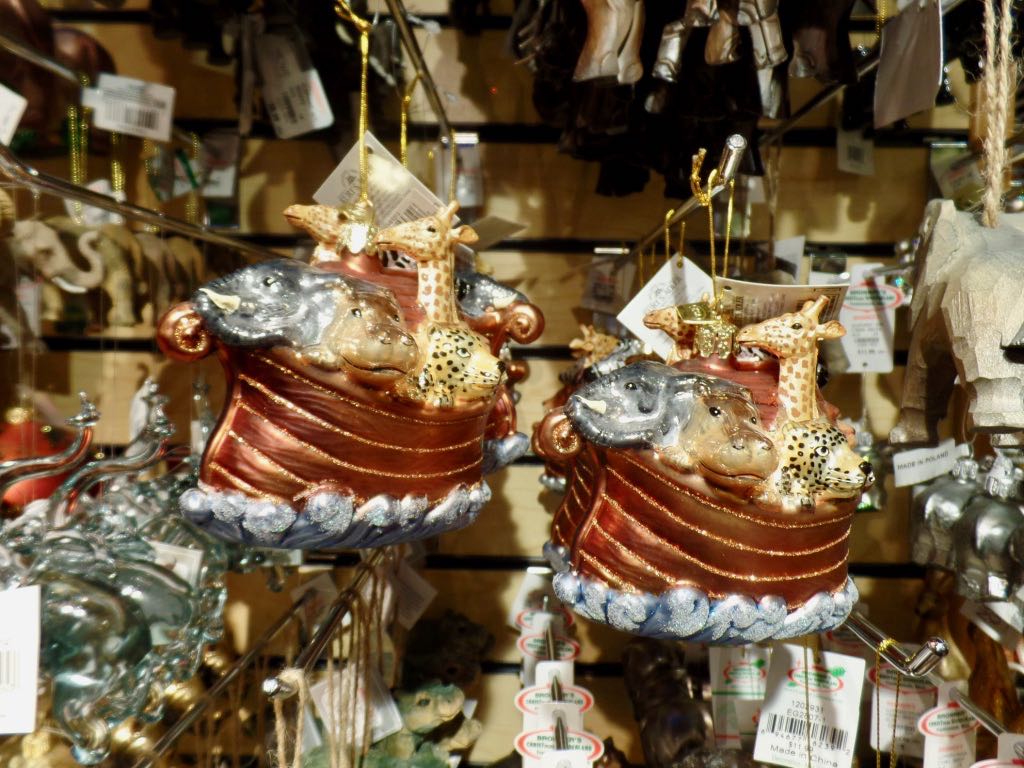 And here's a full-on Noah's Ark, for all of you folks who want to decorate like you have a 1930s funhouse in your amusement park! 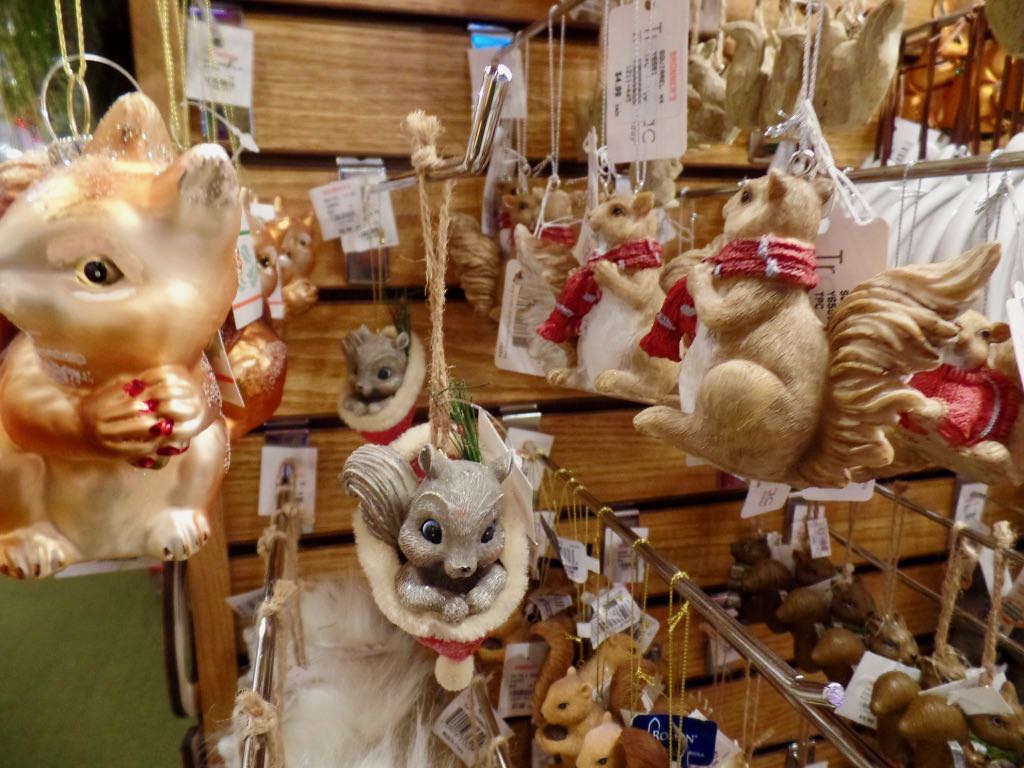 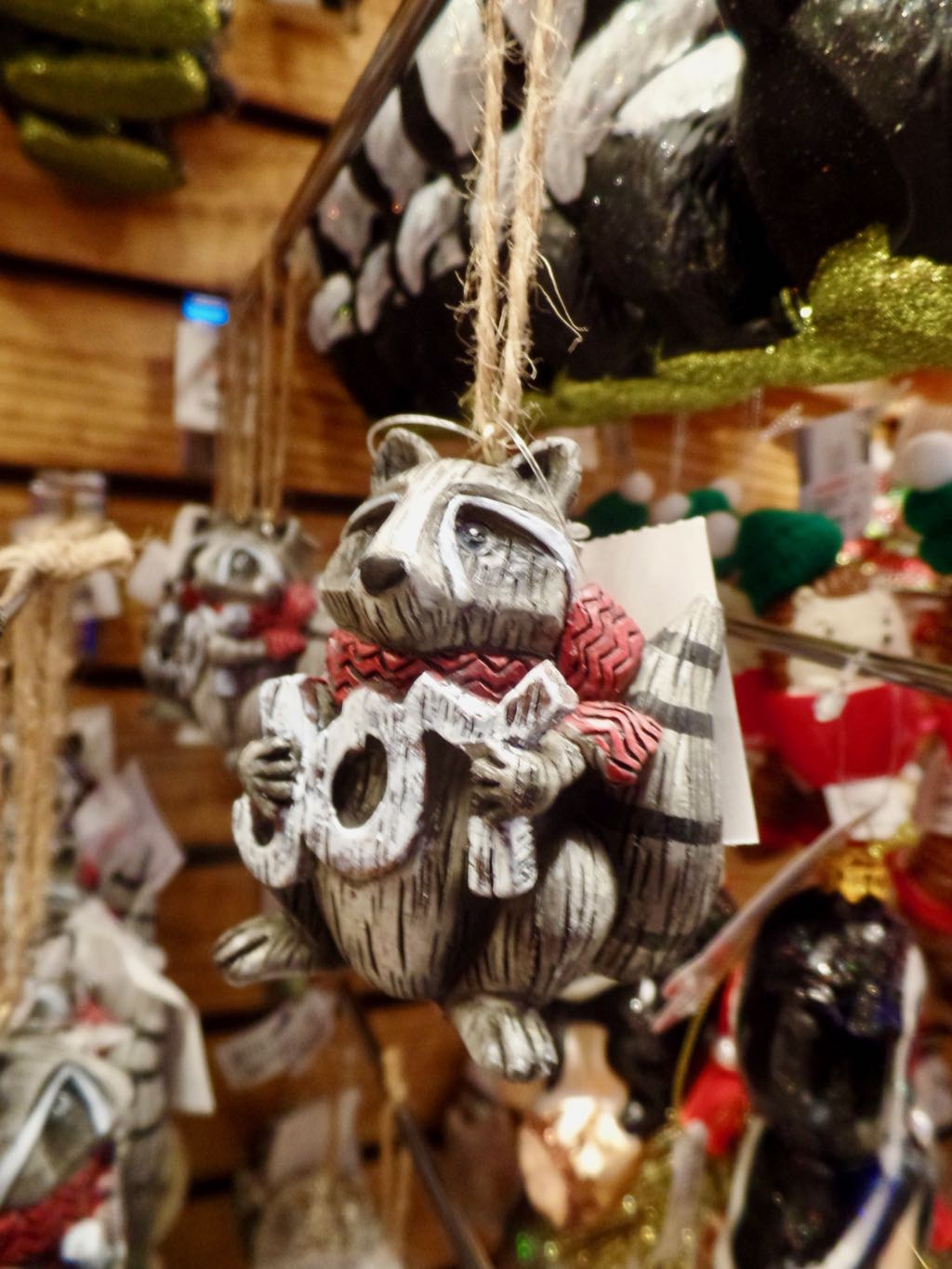 Here's a raccoon bringing you some holiday Ooy! 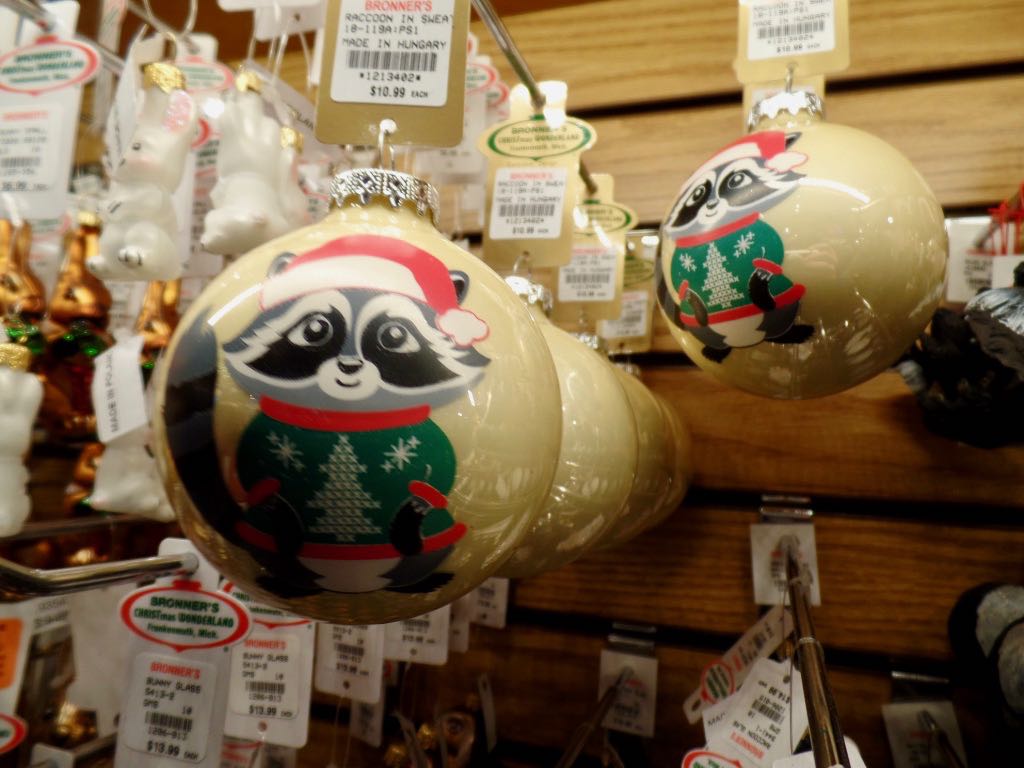 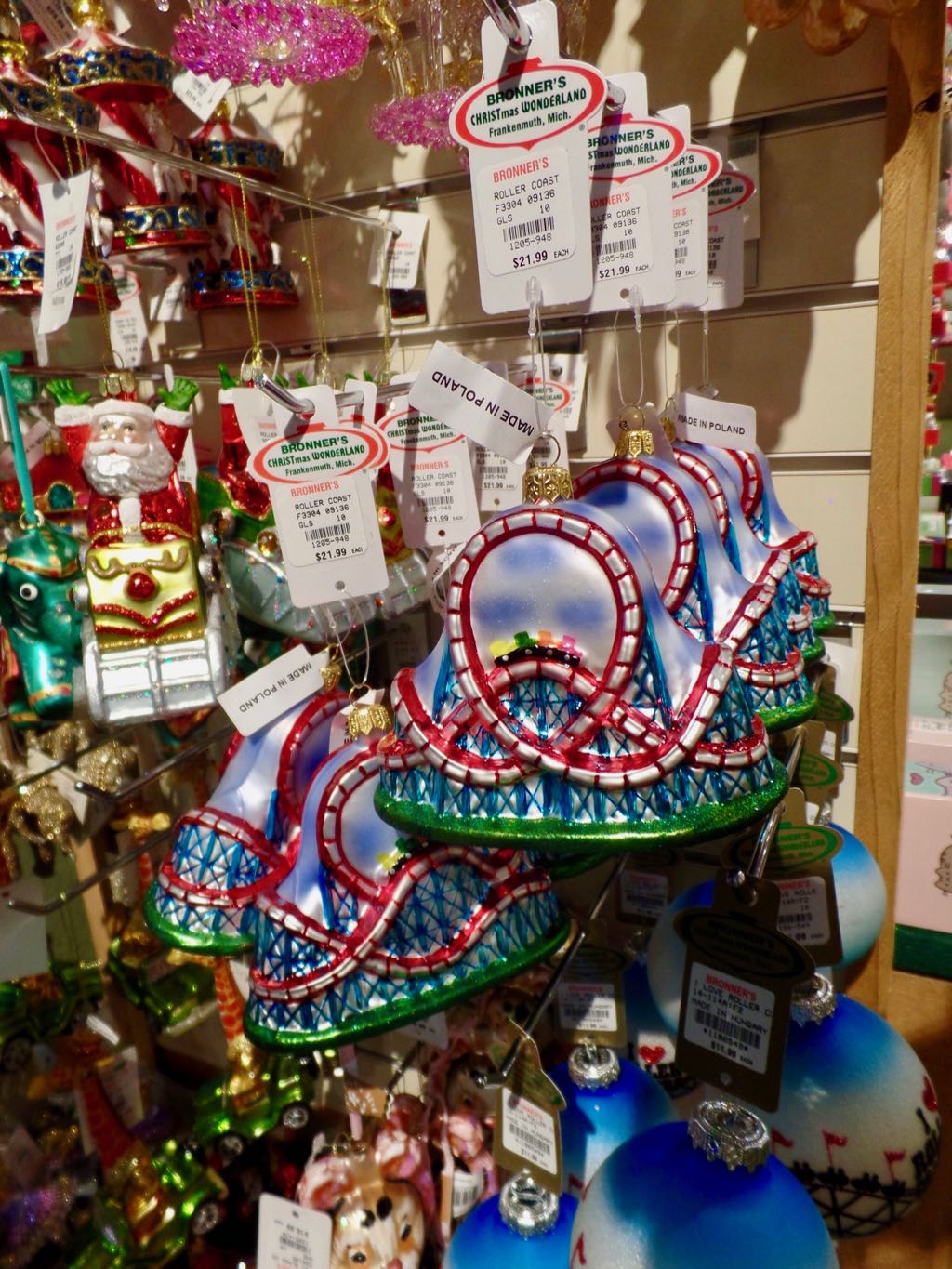 And finally the roller coaster ornaments! There's fewer of them than I'd have expected, although what someone really needs is to make a garland that's a railroad track. 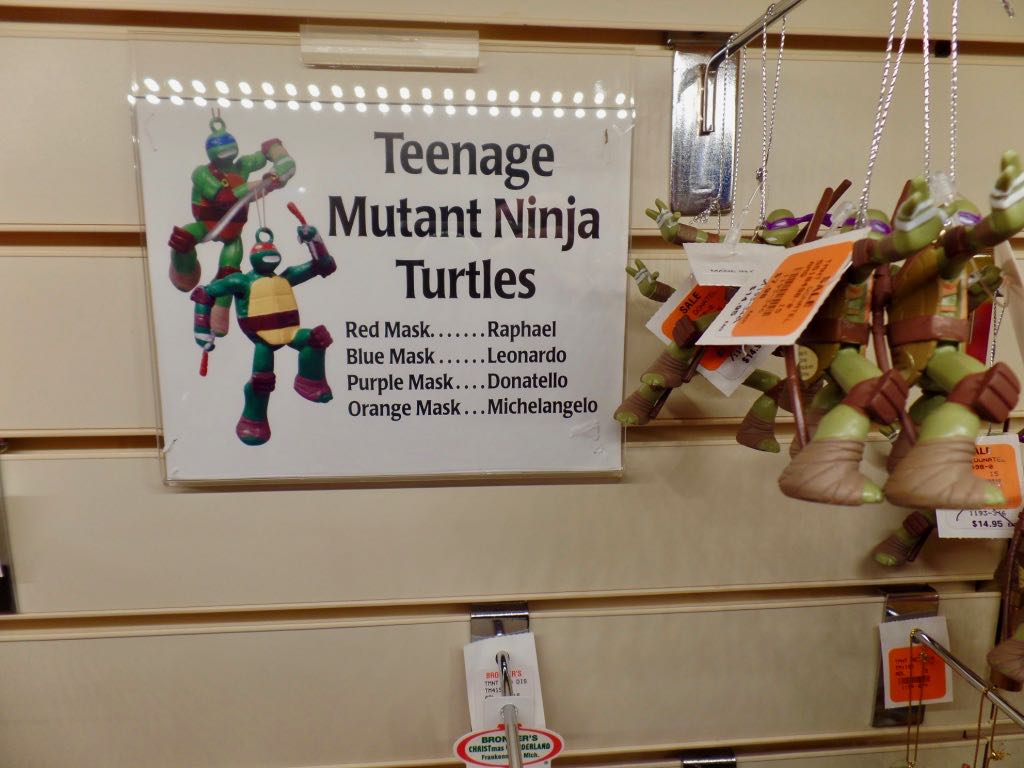 Character-license ornaments with, being honest, a really useful guide.

Trivia: By 1880 a telegraph message from Bombay to London cost four shillings per word, with delivery to be expected the next day. Source: Empire: The Rise and Decline of the British World Order and the Lessons for Global Power, Niall Ferguson.

PS: How Many Of This Weird Prime Are There? which is a quick thing about discovering a neat little kind of prime number.