In a normal year we would have gone to Crossroads Village, near Flint. Possibly before Christmas, but more likely after, in that lull between Christmas and New Year's. It's fun to walk around the historical buildings, huddled together to make an Old-Fashioned village, watching the lights and eating kettle corn and getting our last amusement park rides of the year in, on their fast Superior (Ferris) Wheel and the fastest merry-go-round in Michigan. But obviously they weren't doing the normal village walk-throughs and rides and show at the opera house or the Huckleberry Railroad ride through the Christmas lights display.

But they would have something. In past years they'd had, midweek, drive-through days where you could just motor through the small village. This year, they extended that to nearly every day, and a longer course, one that goes through some of the ordinarily non-public areas. We couldn't ride anything, of course, or even get out of the car. But we could make some popcorn with kettle-corn-flavor and bring it along, and so we did that.

Crossroads Village looked ... normal, from the street. The parking lot was the strange part. They'd set up a winding path through the main lot, leading up to the payment booth. And then a further winding path after that through the first several rounds of lights. We could get in through a service road, hidden off at the far end of the village that we never visit because it's never lighted (I guess, so far as we know) and drove in to Crossroads Village proper. They had paths roped off, and Nutcracker soldier figures pointing the directions to go on the path through. We opened our car windows to get better photographs, of course, and could hear through the public address system the distant, echoed playing of some of the Christmas songs we normally hear on the train. I'm still not sure how I feel about that. It might have been less haunting if we didn't feel so alone --- there were few other cars around, when we got there --- and if it weren't a novelty song about how I sure do like them Christmas cookies that we roll our eyes through every year. And we heard this one song twice, somehow.

They did have a Grinch performer, hanging around near the gift shop, hamming it up and waving to people and that's comforting to see. We'd seen their Grinch a couple of past years, usually at the gazebo.

We stopped, our longest stop, at the corner by the carousel building. They'd lit it up, and even put the green-and-red blankets over the horse's saddles just like they would in a normal year. The blankets are seasonal, yes, but also protect the horses from boots tracking in snow and ice and mud. It's the only carousel

bunny_hugger saw in person all year, and we couldn't ride it. (I saw the carousel at Freehold Raceway Mall, when I was in New Jersey back in January.) She took pictures, trying to get something that could fit on her homemade carousel calendar for 2021.

Crossroads Village did a great job arranging their light fixtures in accessible places. The final show was, yes, the Twelve Days of Christmas and we realized this was a surely unique opportunity. We could just stop and with the windows down take reasonably clear photographs of all twelve days' fixtures. It's a great chance we hope will never come again.

We closed out Crossroads Village. Of course we would. It may have been 2020 but we were still us.

Now, let's close out 2019's Silver Bells in the City festival. Plus a few minutes of silly bonus material. 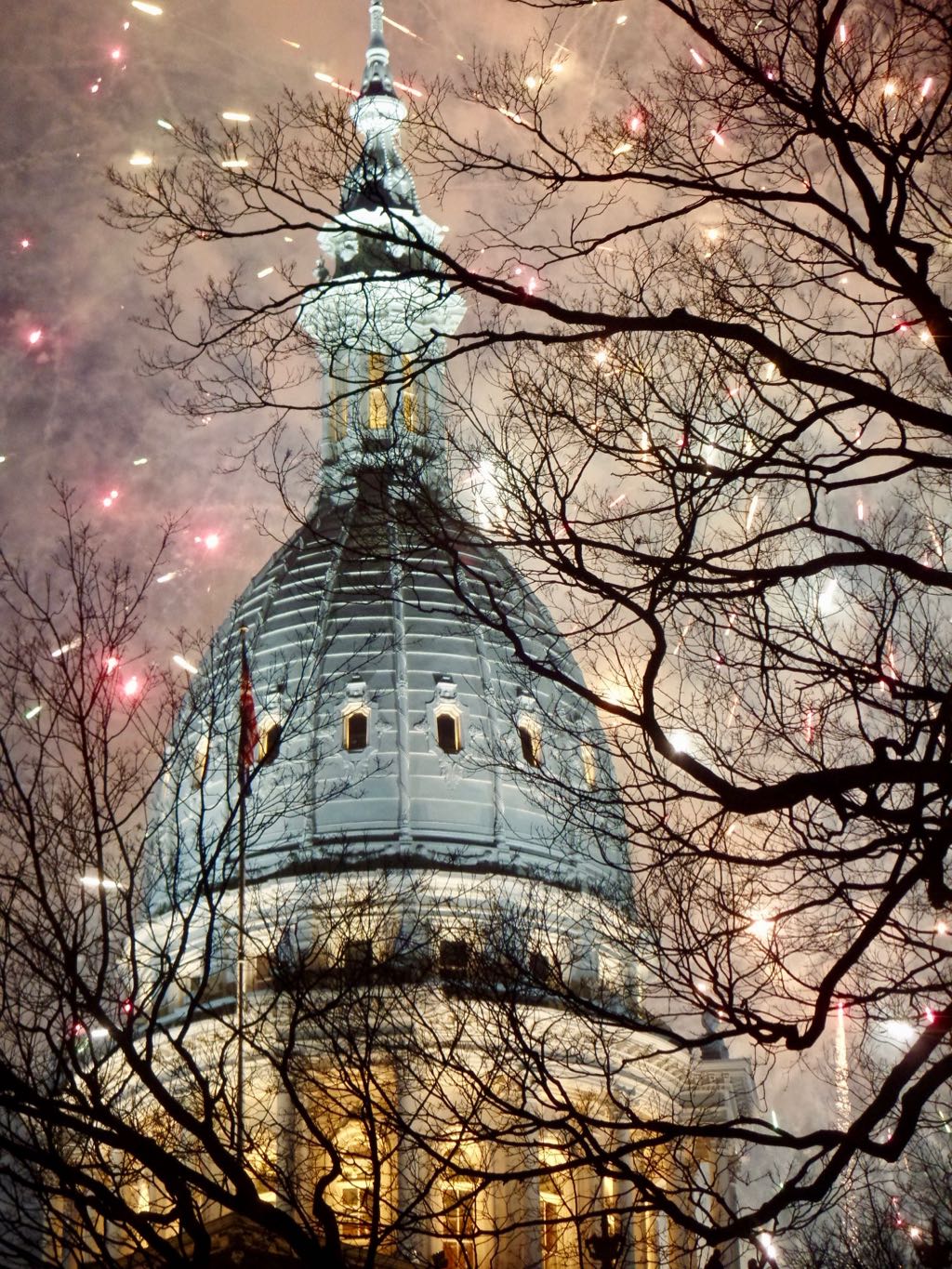 More fireworks behind the capitol. Pretty near the end of the show. 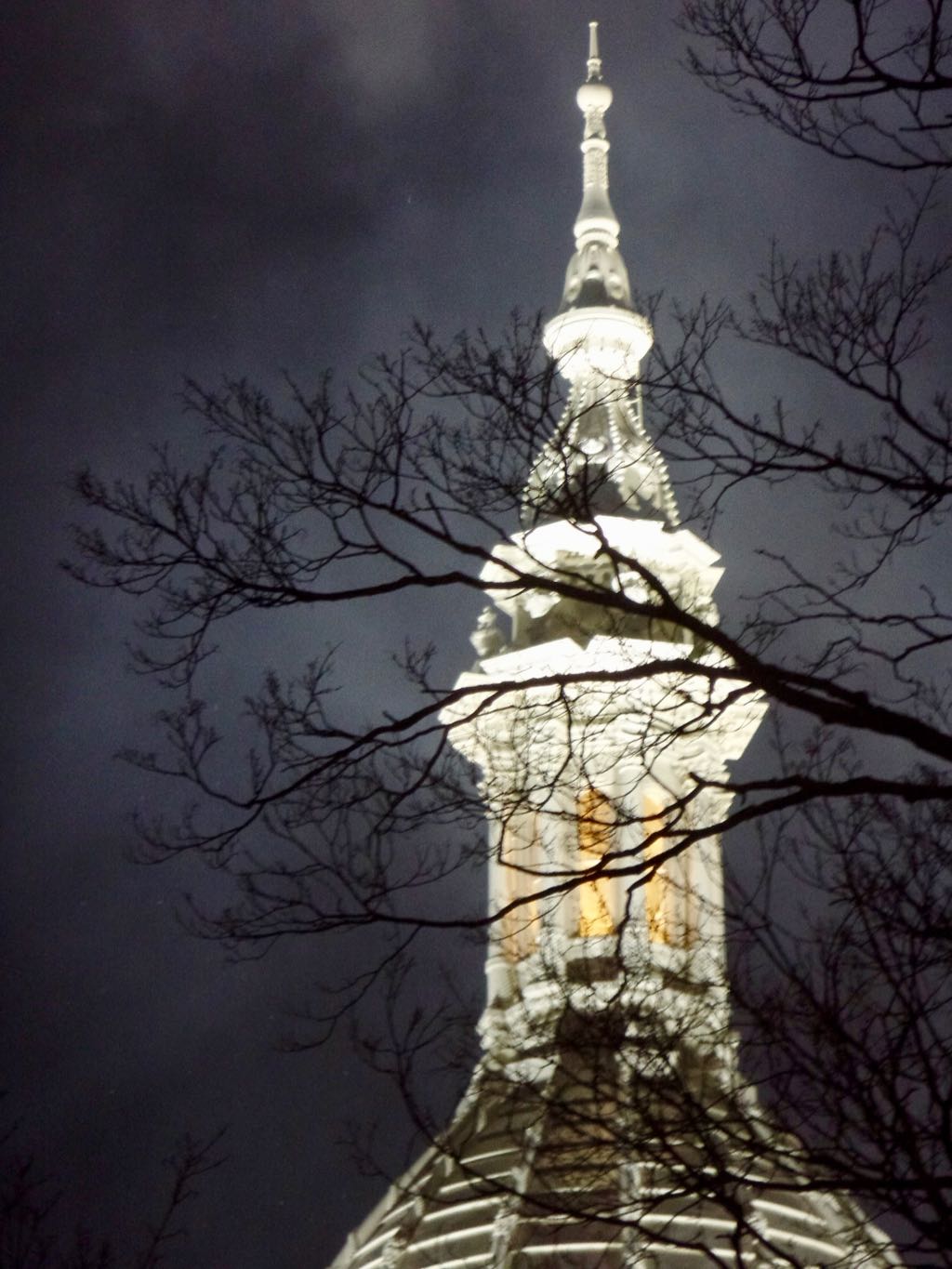 Just the top of the state capitol with smoke clouds from the fireworks behind it. 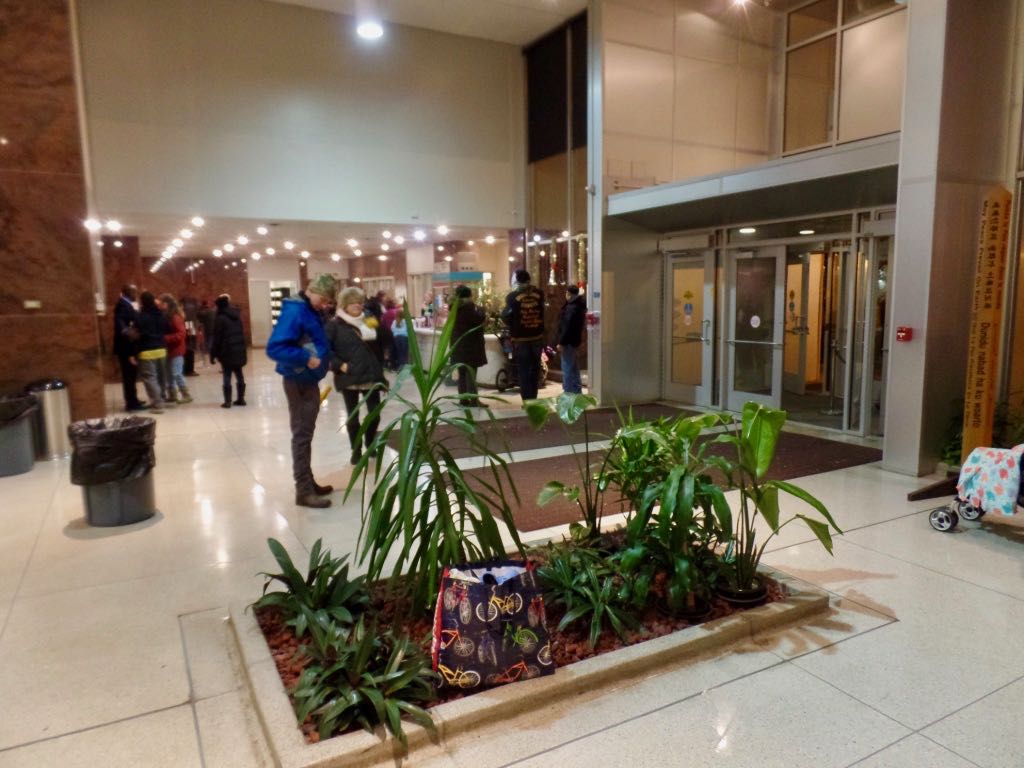 Checking back in City Hall for a spot of warmth. Genuinely like those in-ground planters and I hope someone returned for their tote bag. 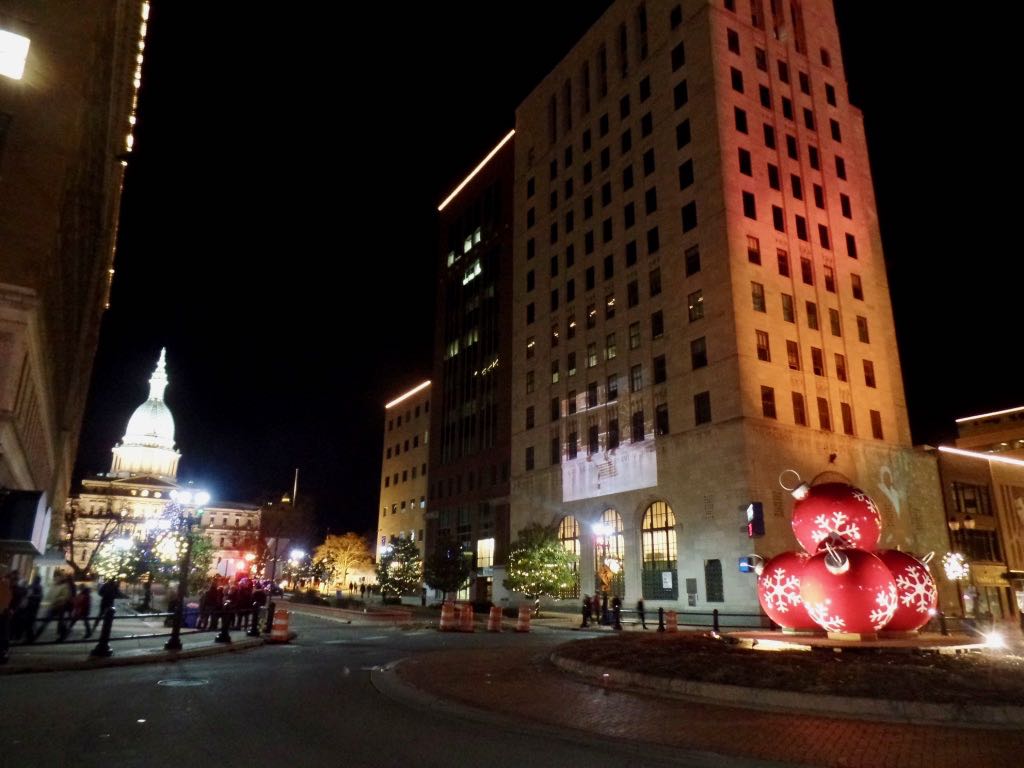 Prowling around downtown a little. Here's the famous red balls, a temporary seasonal ornament put on a traffic circle downtown. In winter 2019 someone smashed into them, but they were repaired and restored by Bronner's and they're there because nobody has a good idea of what to put in the middle of the traffic circle. 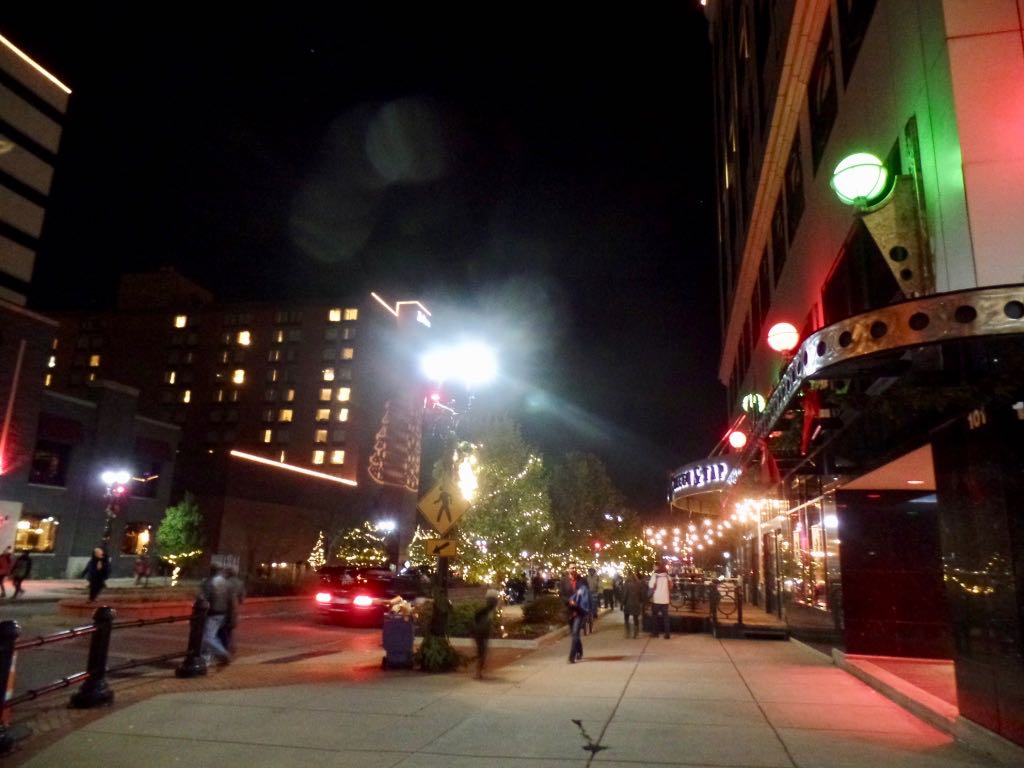 Looking away from the capitol. This, roughly, is the direction home. 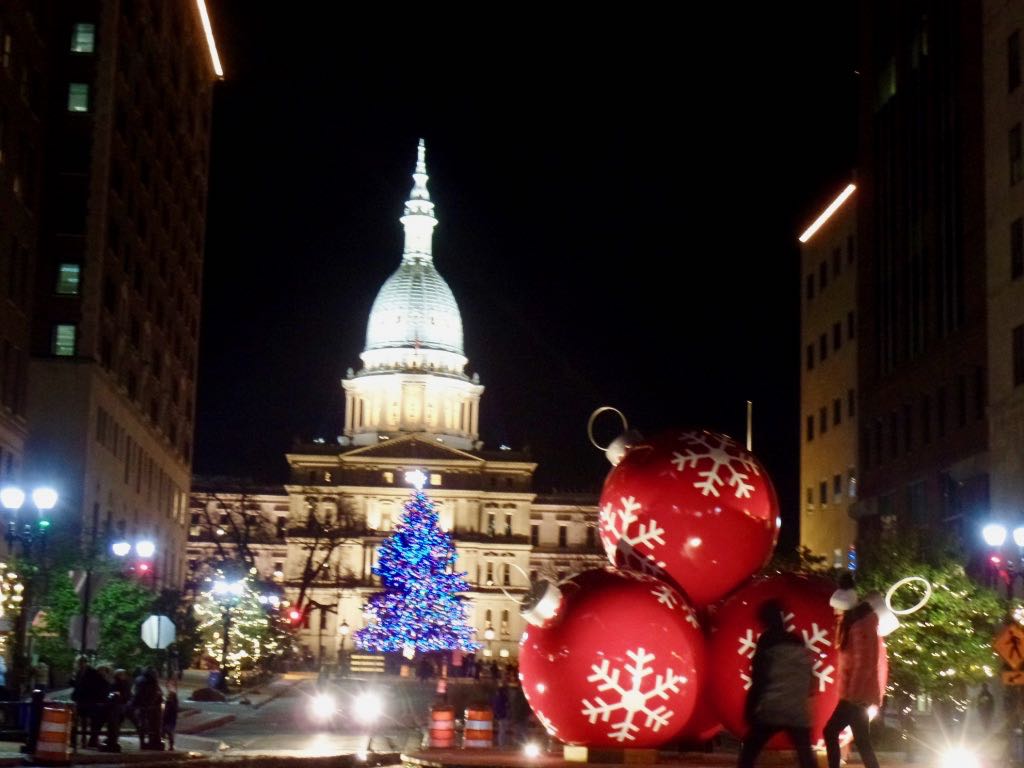 And here's the capitol, the State Tree, and the Giant Red Balls all at once. 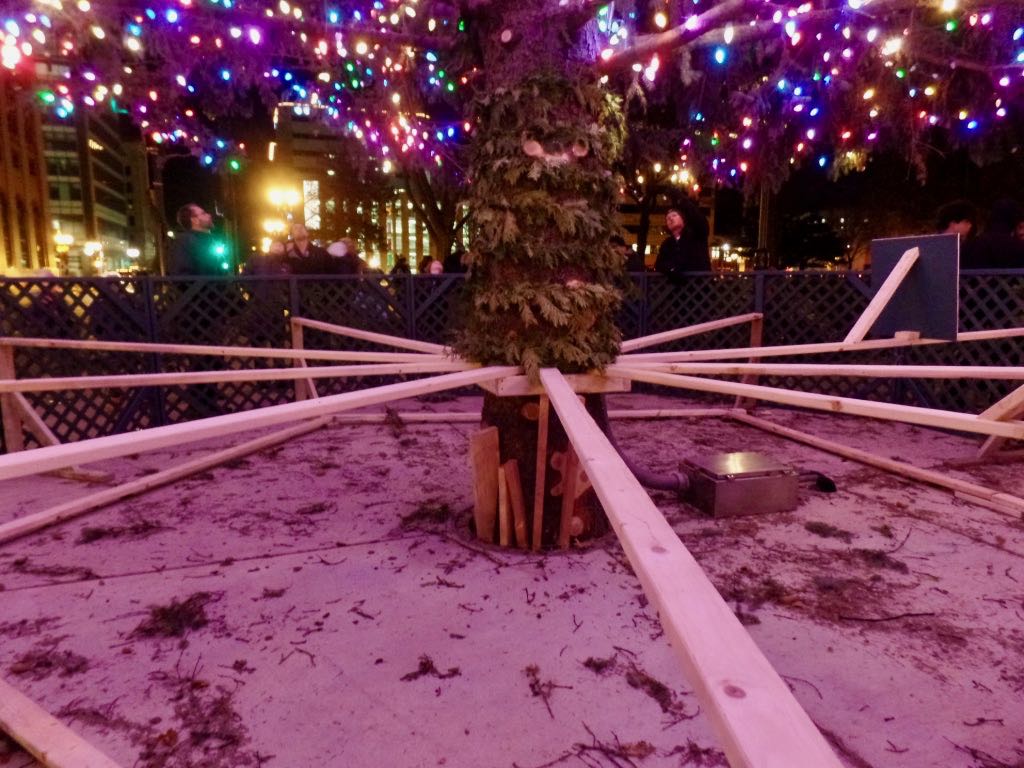 Oh, and here's underneath the State Tree. Looks like a really confident, clean job of shimming ... you know, some tree farms will drill a hole down the center so you can just rest the tree on a spike. Try it once, you'll never go back. 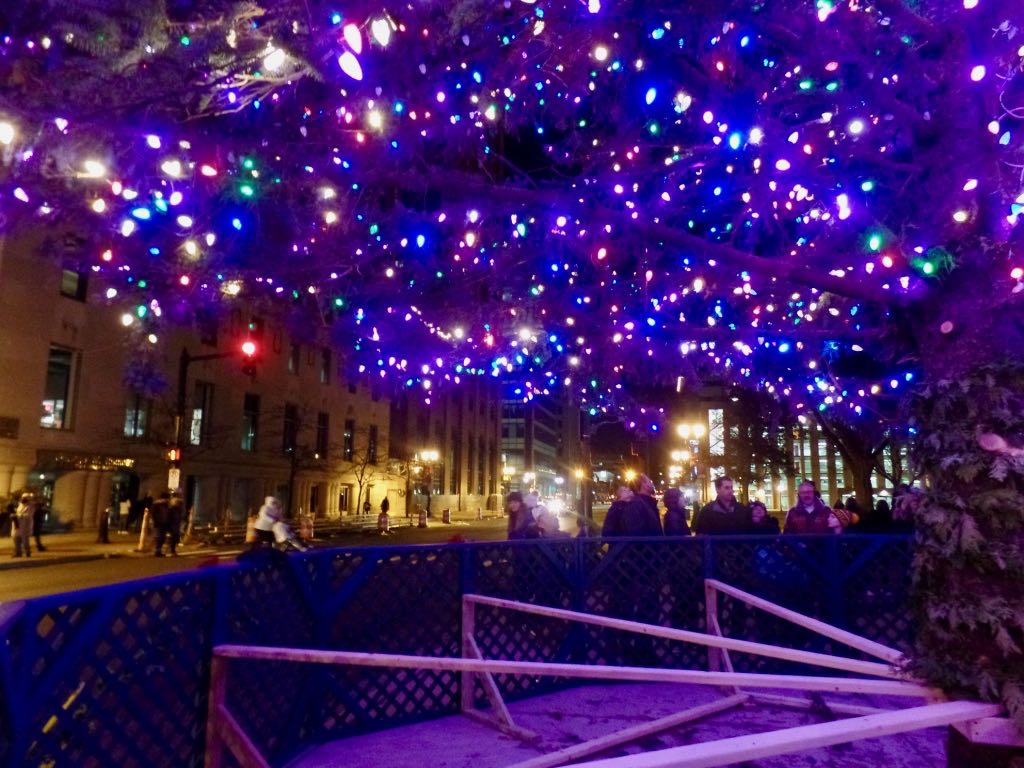 More peeking out underneath the tree. In the direction of the center here, far off a ways, is the area library's main branch. 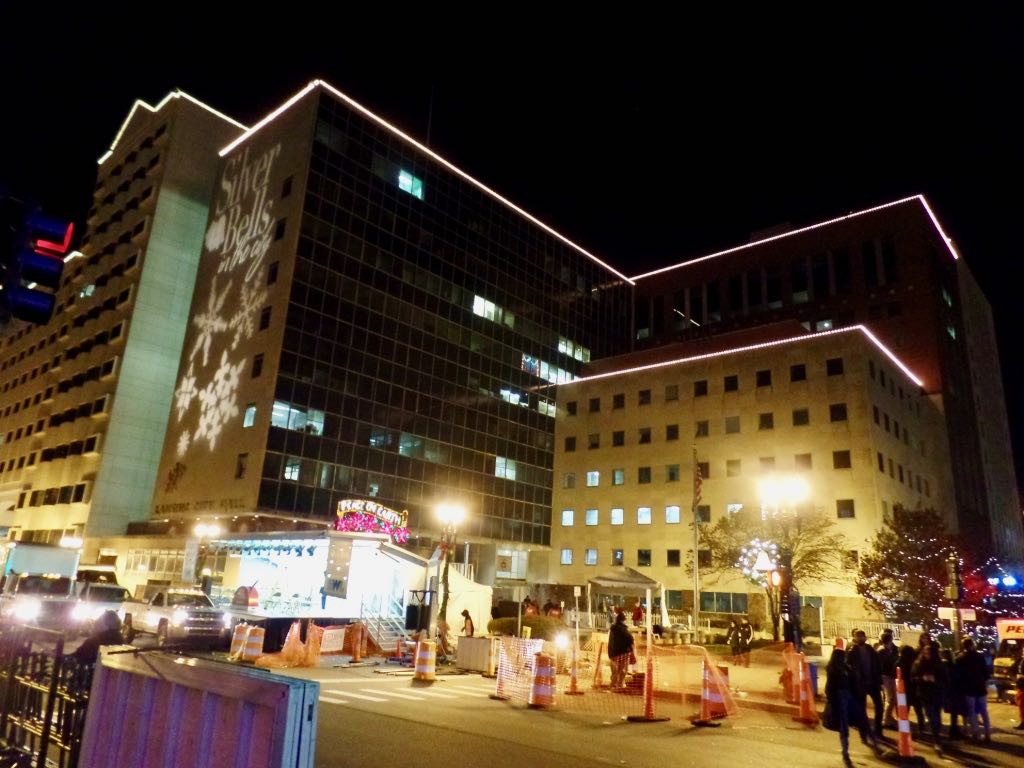 Looking from the tree back at City Hall. They're taking down the reviewing stand. You can see the tree lighting lever still in place. 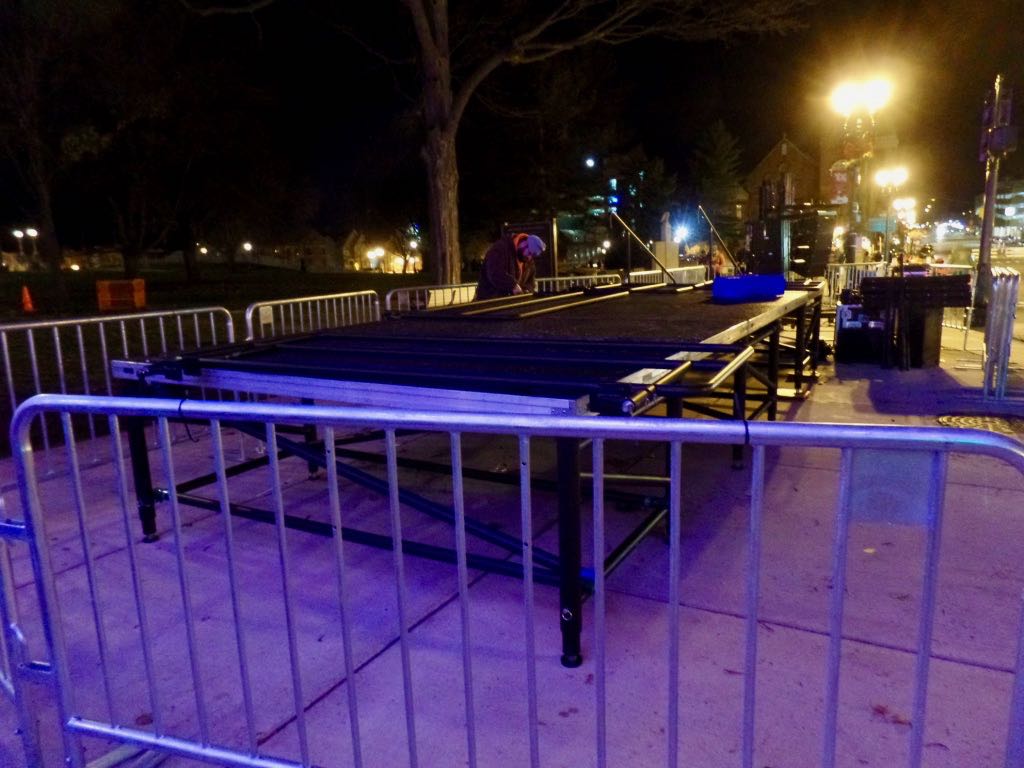 Performers' stand being disassembled after everything's done for the night. 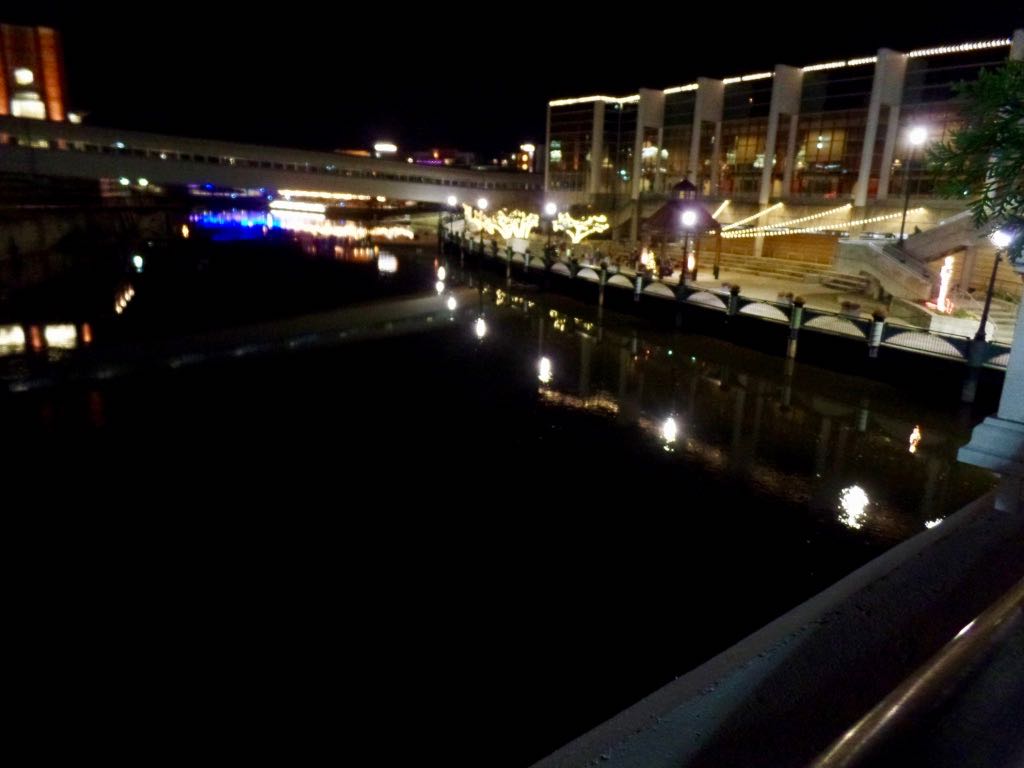 And here's a view of the Grand River by night, with the City Convention Center behind it. 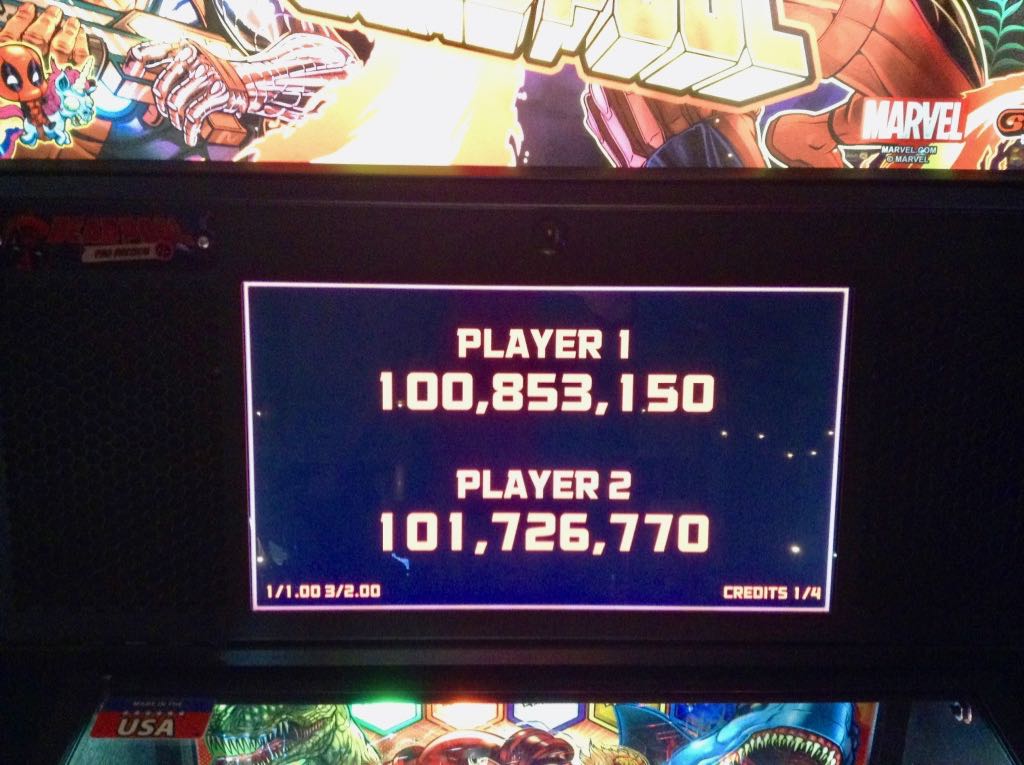 And then a quick thing from Lansing Pinball League's Zen Tournament night. This is a rather close game of Deadpool, really. But hey, you play a lot of games, you'll see sometimes the finishes are very close to one another, what are the odds you'll see another like ... 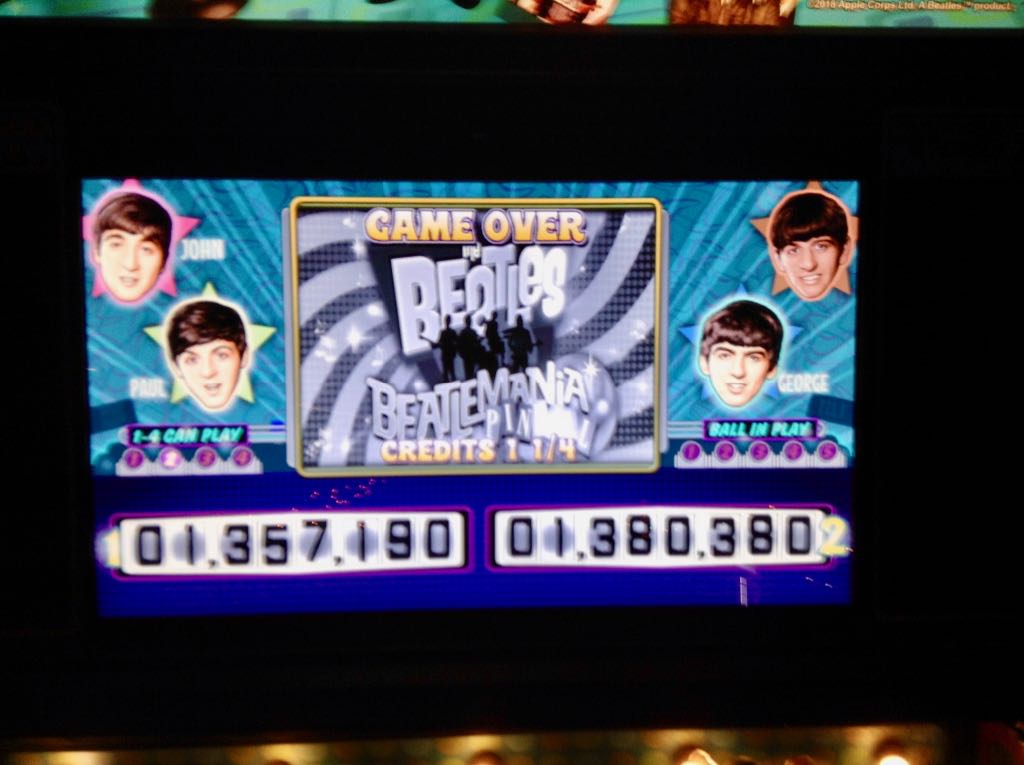 Oh for crying out loud. 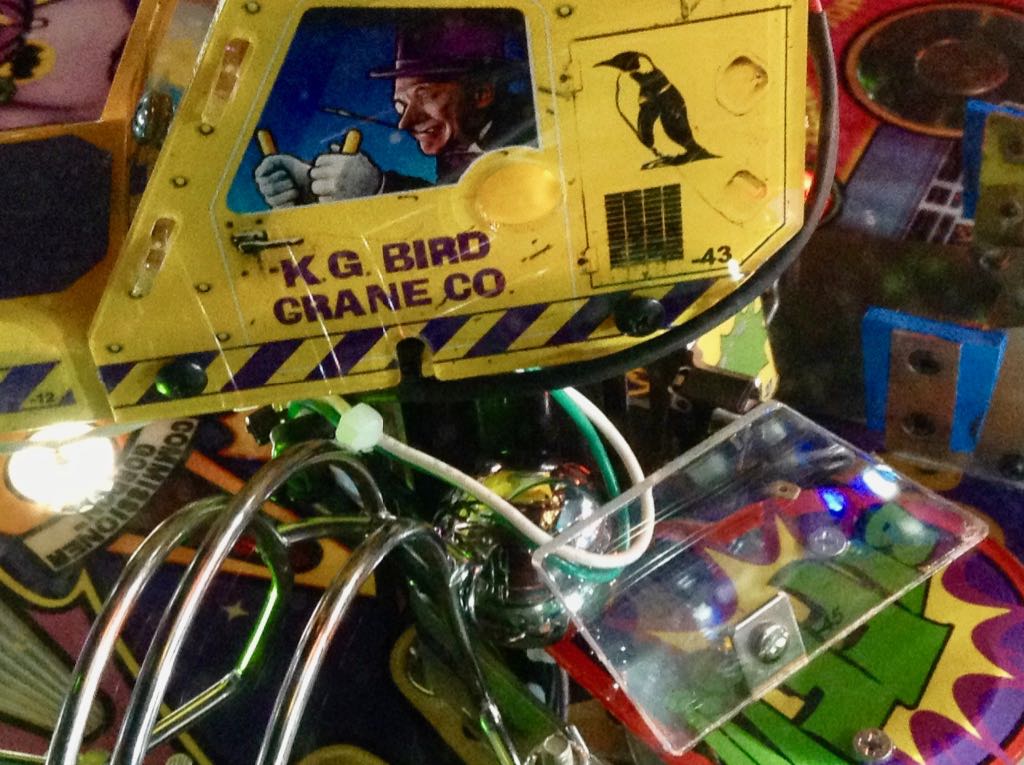 And here's a pinball stuck but good inside the Batman 66 pinball machine. In multiball you can get a bunch of balls flying around really fast but something crazy has to have happened that it got wedged in there.

Trivia: In 1938 a roll-and-move board game based on the comic strip Moon Mullins was published. Bumping into a fat lady moved your token back two spaces. Source: American Cornball: A Laffopedic Guide to the Formerly Funny, Christopher Miller.

PS: How December 2020 Treated My Mathematics Blog as I once again delay finally putting the 2020 A-to-Z to bed.