New Year's Eve brought us of course back to Kalamazoo for MJS's pole barn and his last-tournament-of-the-year. At least that's what we did in the world where right-wing leadership was not determined to make the pandemic as long, miserable, and murderous as possible. In this world --- well, tried to think of what we had done past New Year's Eves. Most of them were pinball events and there was one where

bunny_hugger was sick, but we can't account for one. If only either of us had kept some kind of daily journal of our activities. Too bad.

The day did not go without pinball, though. While there haven't been any sanctioned pinball tournaments since mid-March, and won't be until --- who knows? --- Matchplay still runs challenge tournaments. So

bunny_hugger challenged me to a best-of-seven series on our two pinball machines, the Tri-Zone which came back to life this year and the Flip Side miniature game

bunny_hugger got for Christmas two years ago. I lost the first game, on The Flip Side, because I'm no good at the miniature table and that's that. But Tri-Zone I'm good on. And

bunny_hugger even gave me some wins on Flip Side, with one game of the house balls, and another game in which I just squeaked out a win on the tiny bonus.

The main entertainment for the night was one of my childhood's tradition. In the late 70s for reasons unknown WABC in New York City showed Yellow Submarine as their New Year's Eve entertainment. I've had the DVD for a while and we'd never got around to watching it. This was our chance. It was the first time either of us had seen it in years --- decades for me --- so it was almost as good as wholly new. And filled with surprises, such as that King Features Syndicate had a hand in the production. The same King Features Syndicate that gave the world 91,258 disposable Popeye cartoons earlier that decade. Who would have imagined? It's just ... you know, such a wonderful, ridiculous, loopy thing, full of lovely amiable plotlessness interrupted by the occasional disjointed segue into a song. We haven't watched the DVD extra explaining the making-of. It's maybe more interesting to speculate about, like, what forces came together to keep any grownups at King Features or at the studio from saying no, you need to have more than one thing that fits with another thing in this movie. Or was everyone sure that it made no difference what they filmed, people would watch anyway, the way they made Elvis movies? But also, like, how tightly were the background artists or the crowd animators directed? Were they just given a loose theme and told to go wild, or was someone giving them guidance into just how to make it look disorganized? There's no way to learn except by trying even the slightest bit.

After that I started making the late dinner --- bunches of appetizers, miniature egg rolls and mozzarella sticks and the like --- and we watched Dick Clark's Brand Rockin' New Year's Eve, seeing more of it, and listening to more of it, than we would any normal year. We overall maybe ate too much, and

bunny_hugger stayed up later than she really wanted, but you know? We only get so many chances for a thing like this.

Next big photo-worthy thing in my camera roll? Black Friday, 2019, when we went to the VFW for its traditional day-after-Thanksgiving show and charity drive. Some pictures, mostly of backglasses: 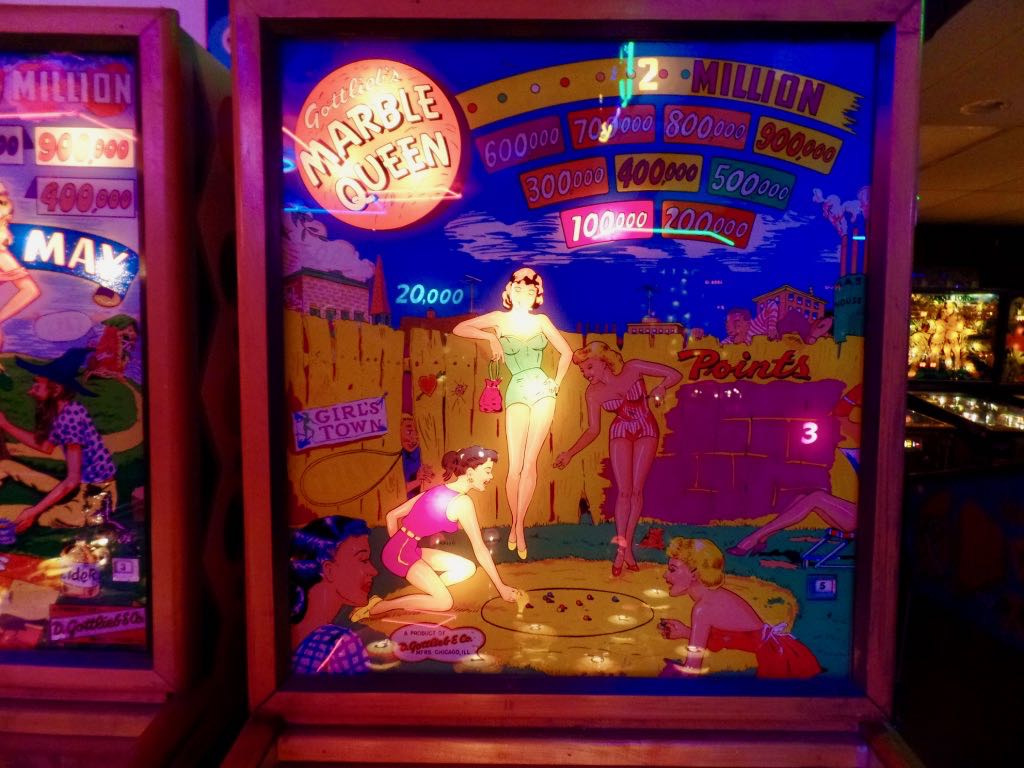 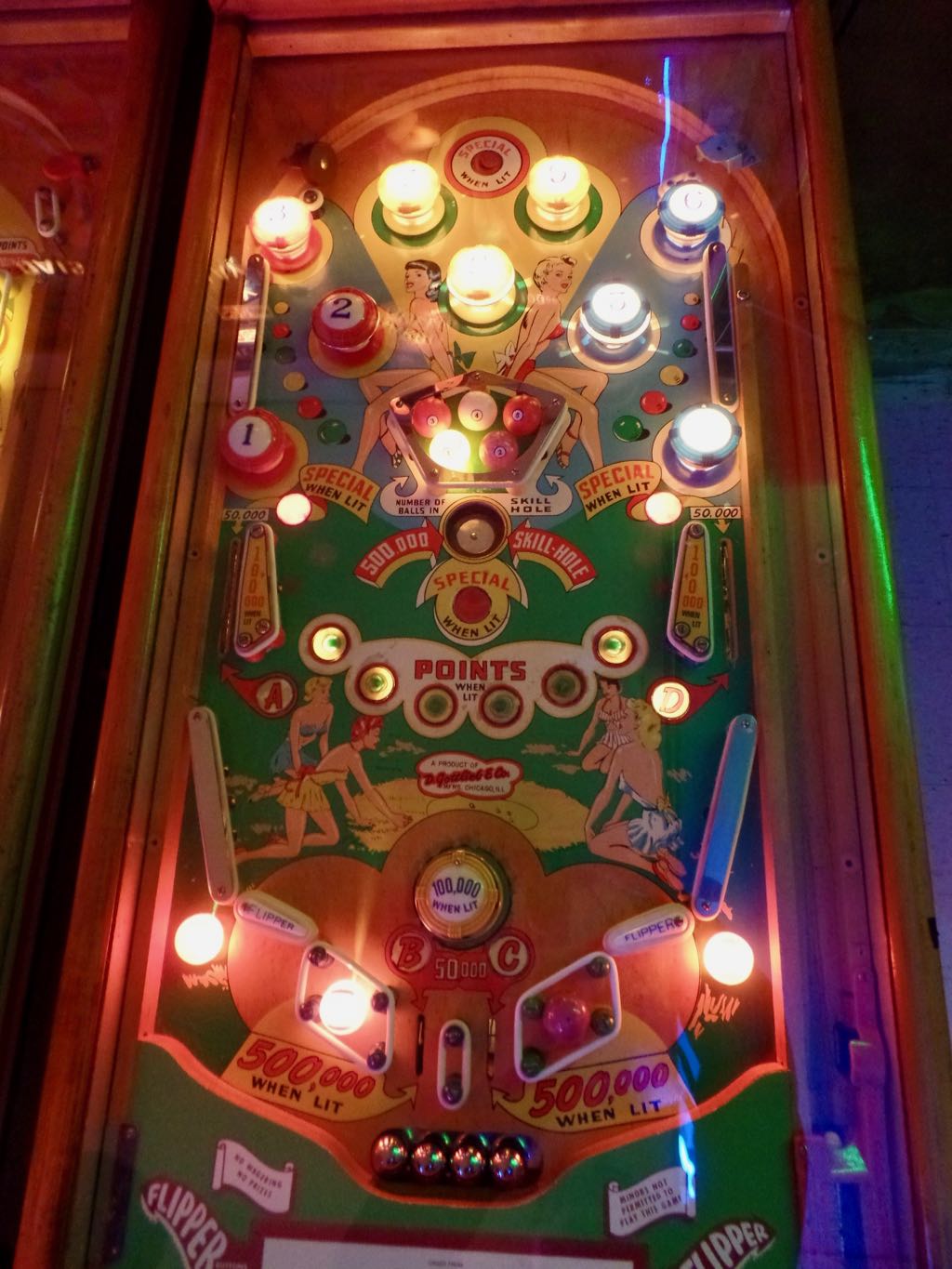 Marble Queen's playfield. Note that by 1953 they hadn't figured where to put the flippers exactly. Also up in the center there's a gobble hole, which will end your ball but maybe give you 500,000 points, or a special when lit. 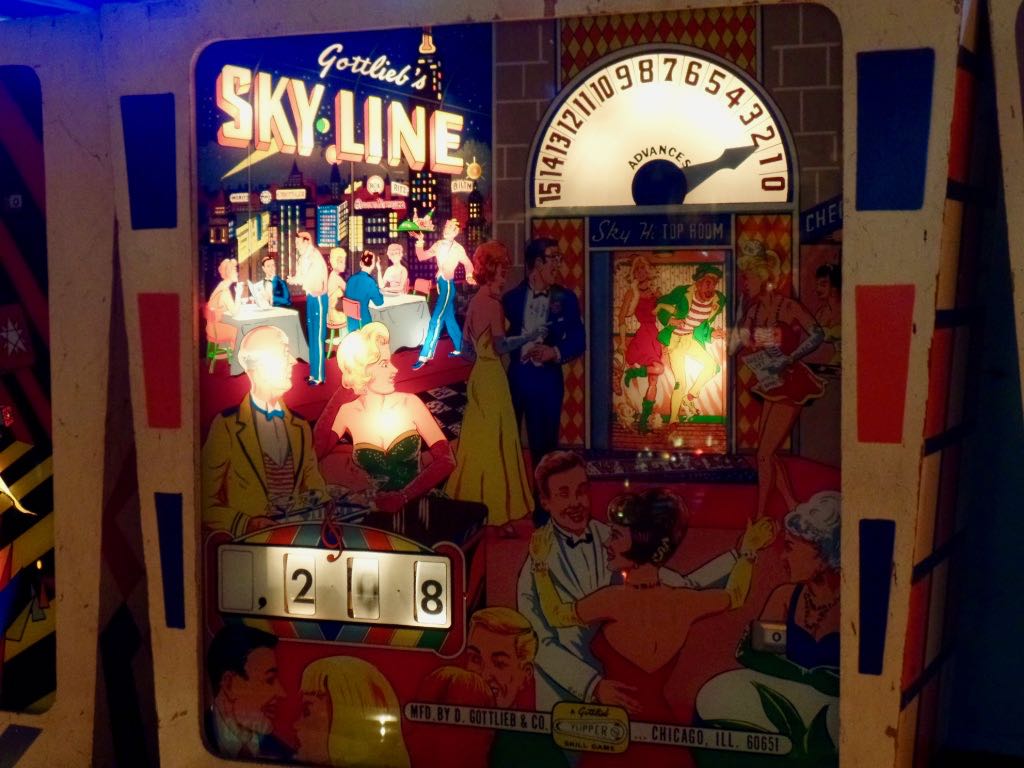 Lucky moment on Sky-Line (Gottlieb, 1965). They had a couple games with some animation in the backglass; when the score rolls over a hundred points (you can see the scoring reel trying) the elevator door slides open to show some hilarity within. 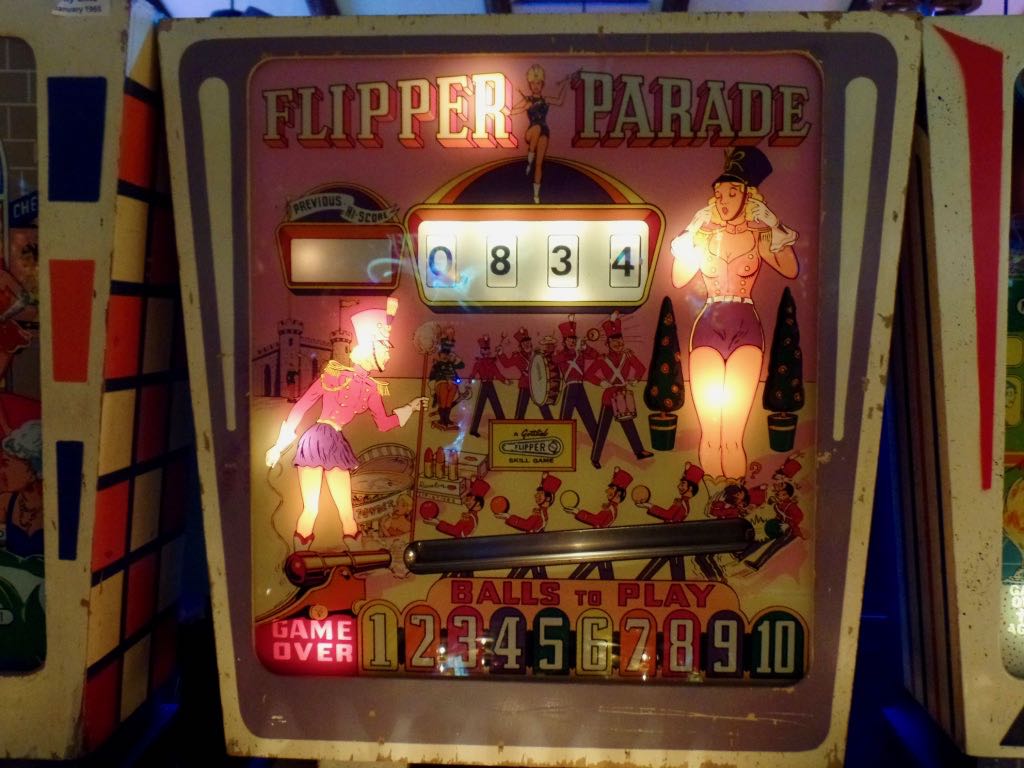 Gottlieb's 1961 Flipper Parade with a slightly gruesome cannonball gimmick in the backglass. 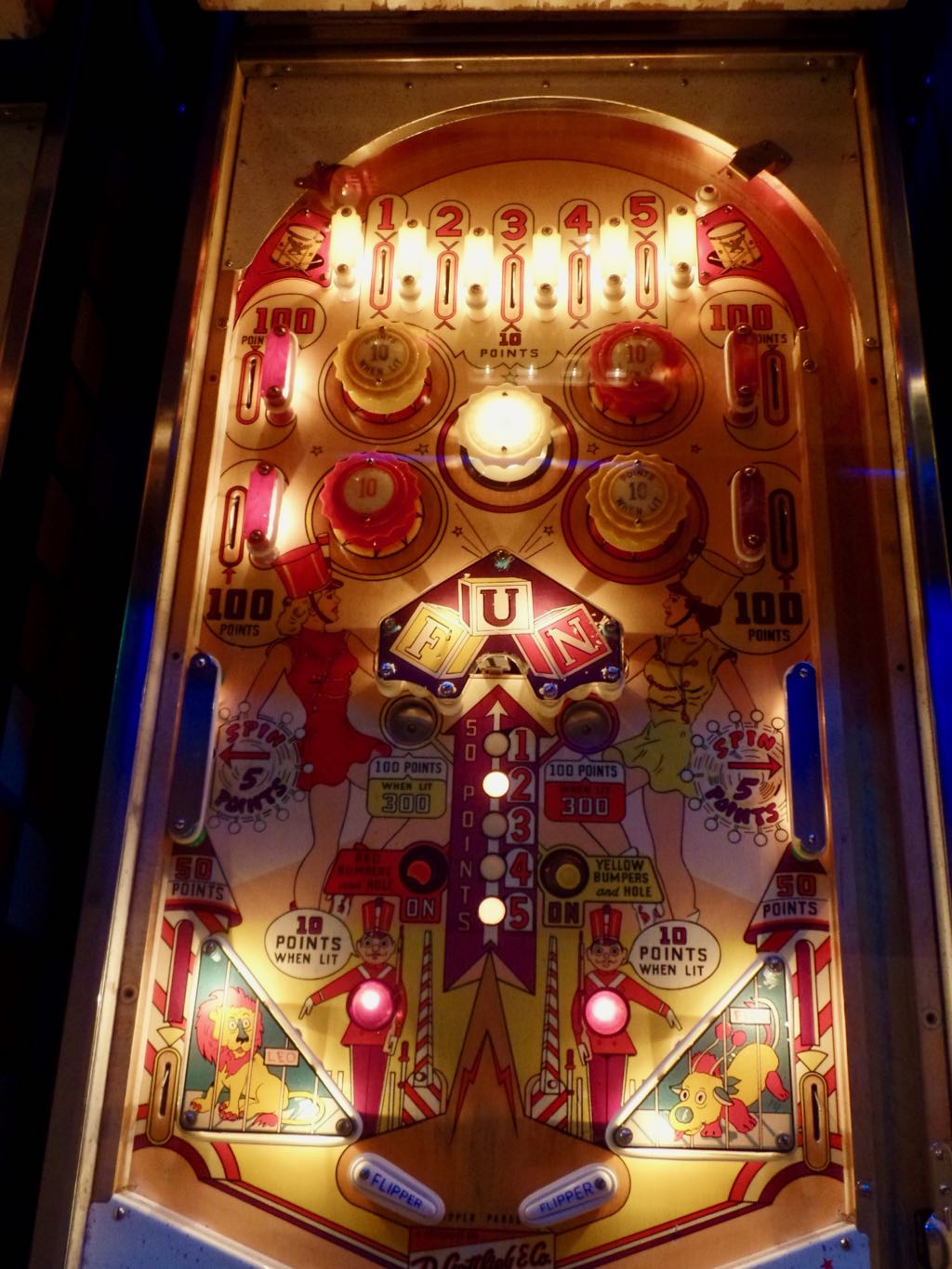 I guess they're all toy soldiers. Playfield for Flipper Parade; the flippers are about where they are on any modern games, but there's no inlanes leading to them. Are we having Zippy the Pinhead yet? 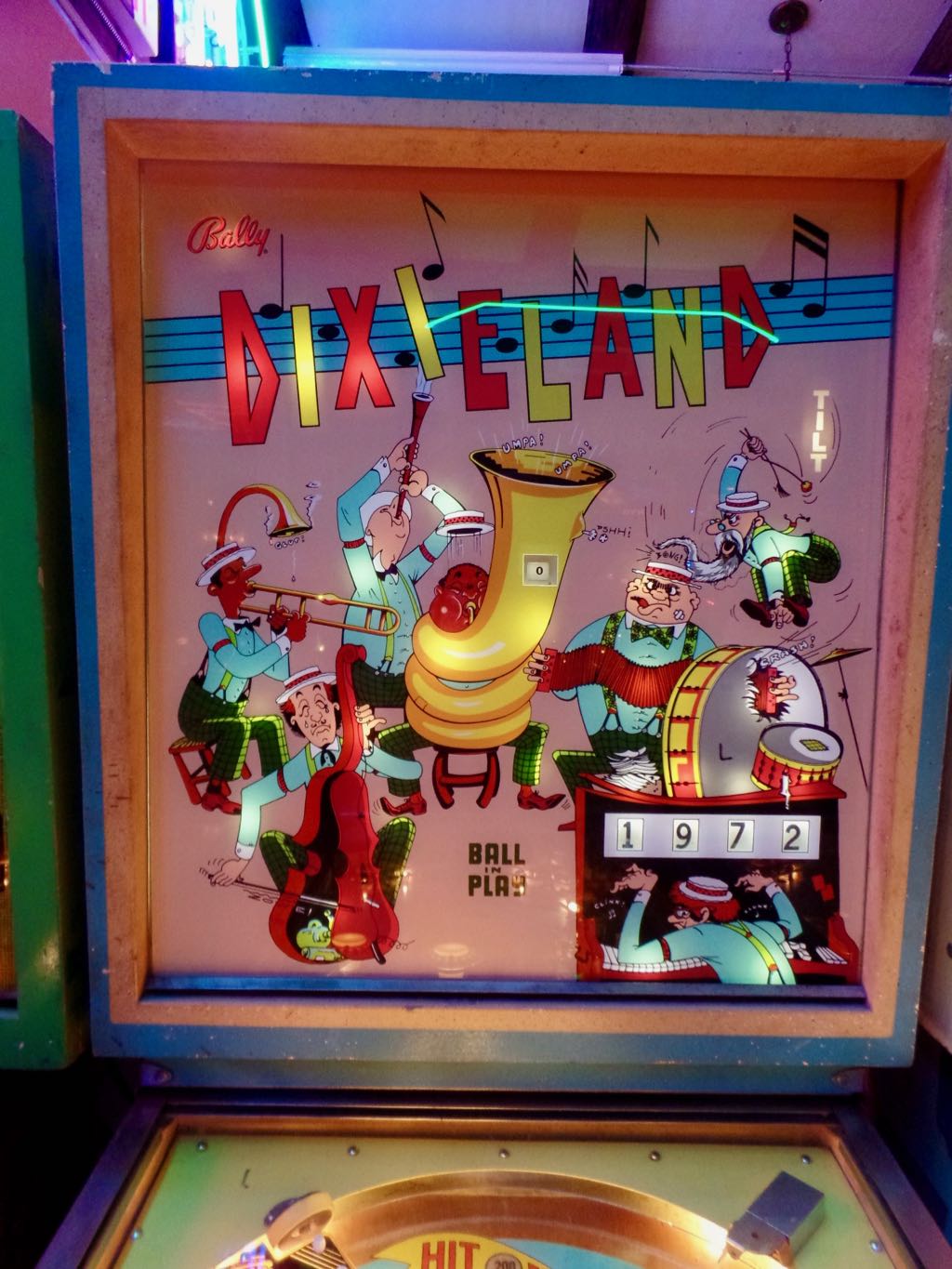 Bally's Dixieland, which is from 1968, don't let the score reels fool you. More fo that Christian Marche artwork. 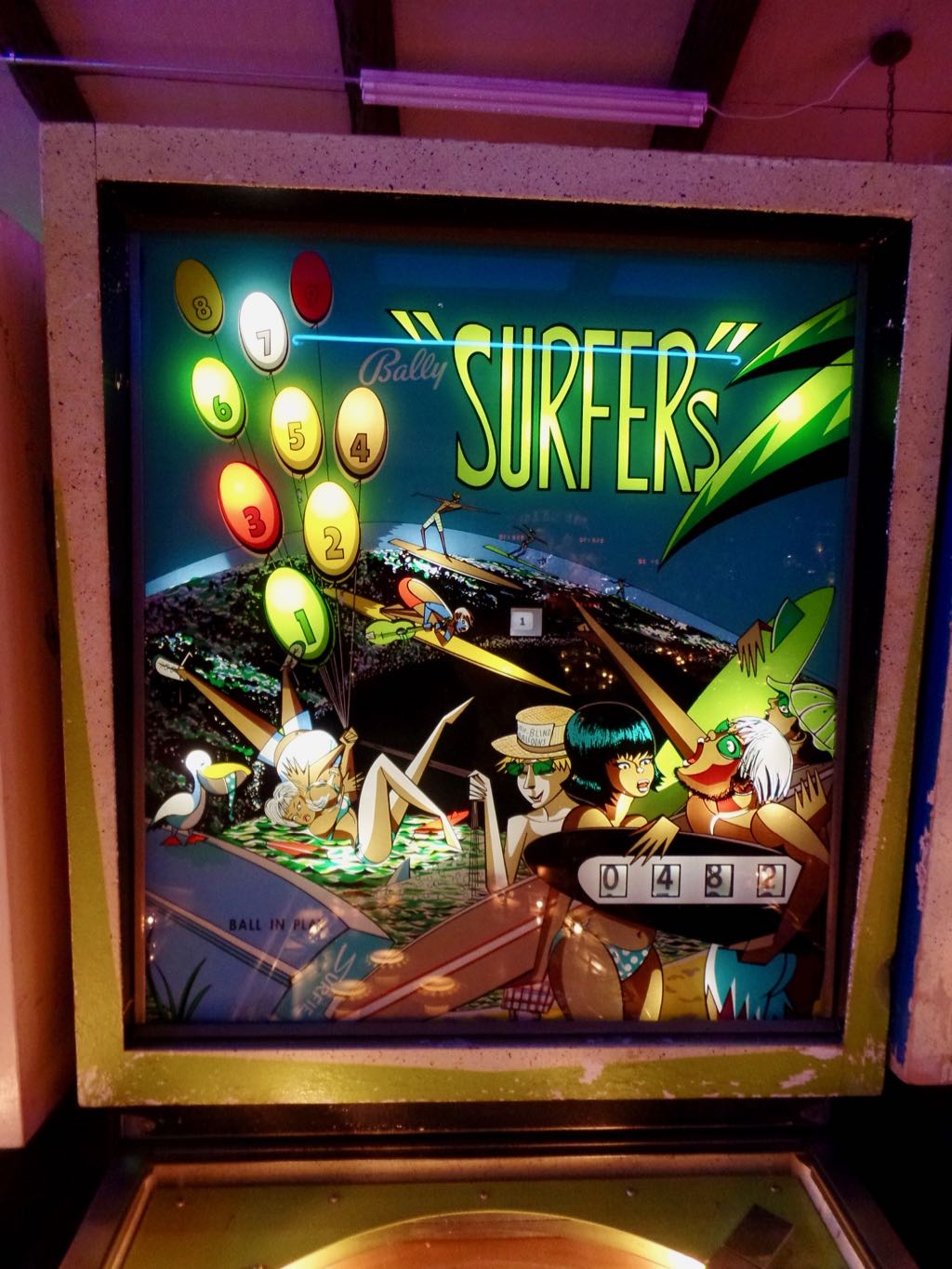 ``Surfers'', a 1968 Bally game that's not sure whether you can say a word as casual and slangy as ``surfers'' without protective quotes around it. 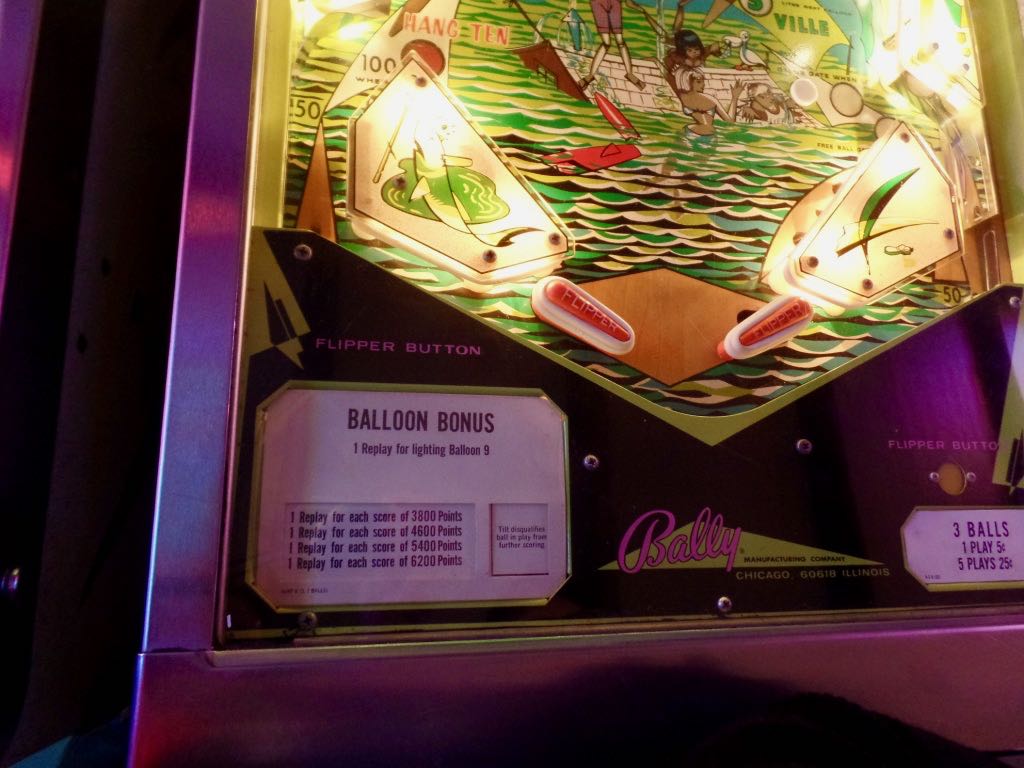 The balloon bonus you get from lighting and collecting some elements on the table and offers a second way, not specifically tied to the score, to earn replays. The weird groove under the flippers there is because they're zipper flippers: the right target will cause them to zoom together to where there's no gap between the two. 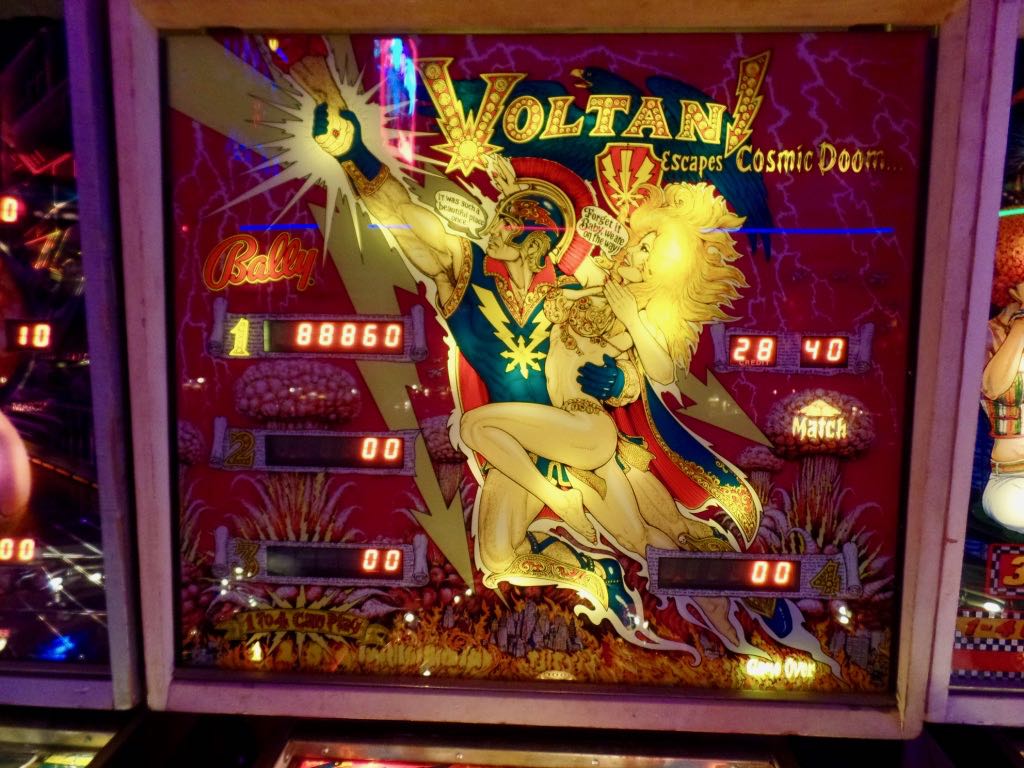 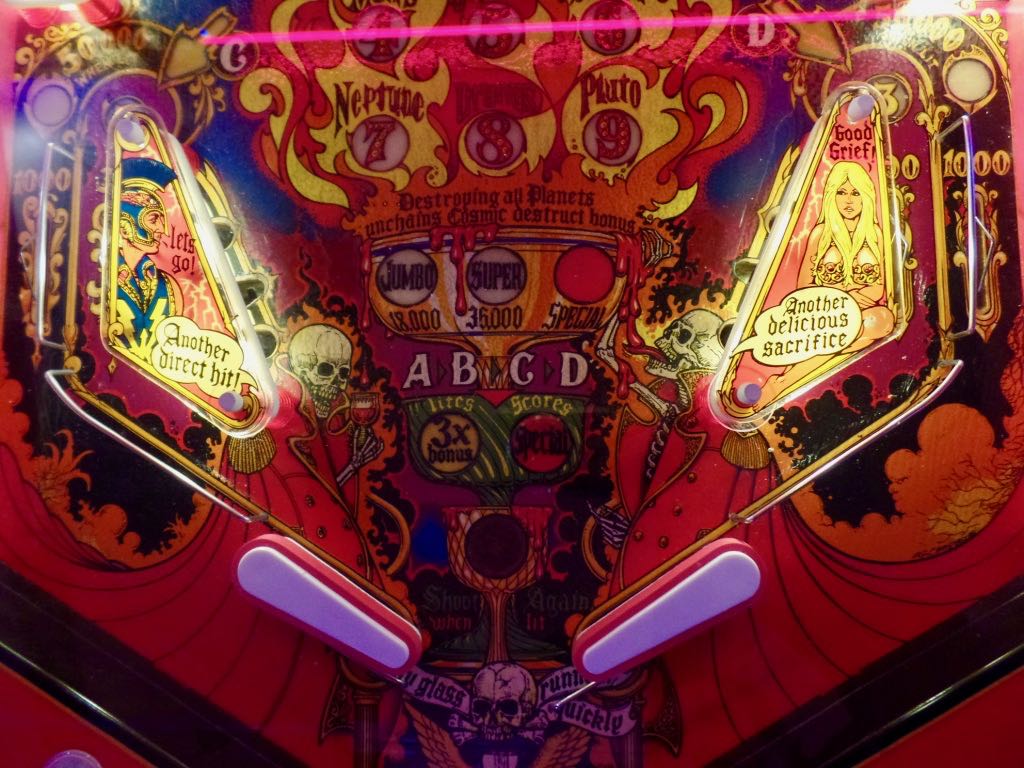 Trivia: John Glenn was the official representative of the astronauts at the funeral for John F Kennedy. Source: First Man: The Life Of Neil A Armstrong, James R Hansen.