Everyone wishes for silver and gold

So here's some more of the Silverball Museum, as seen in not-quite-mid-January 2020. 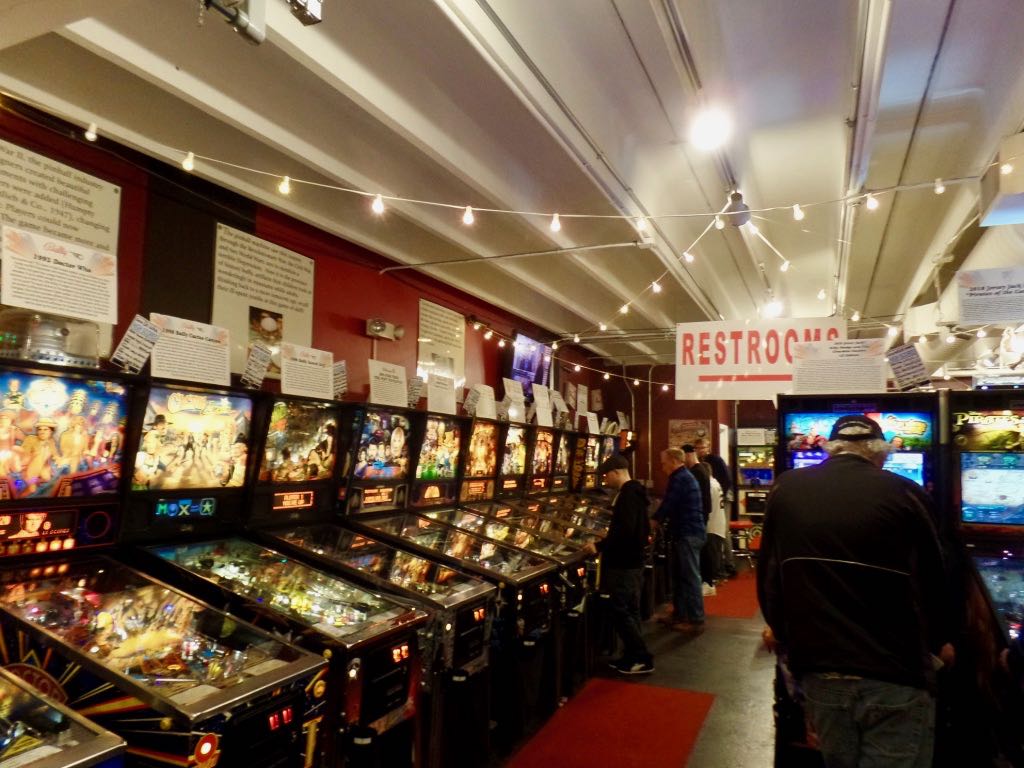 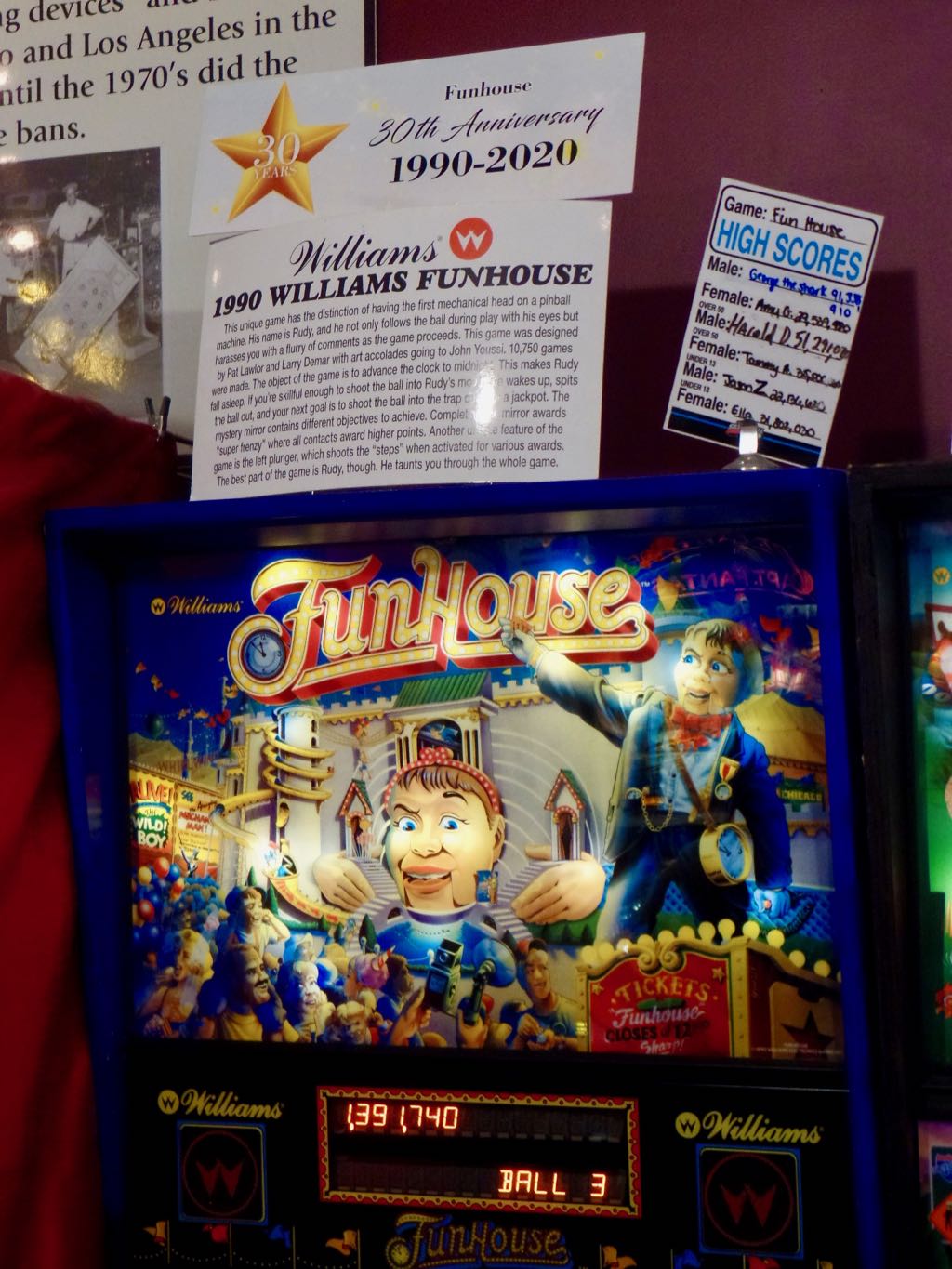 Their FunHouse, and a note celebrating Rudy's 30th anniversary as a pinball icon. 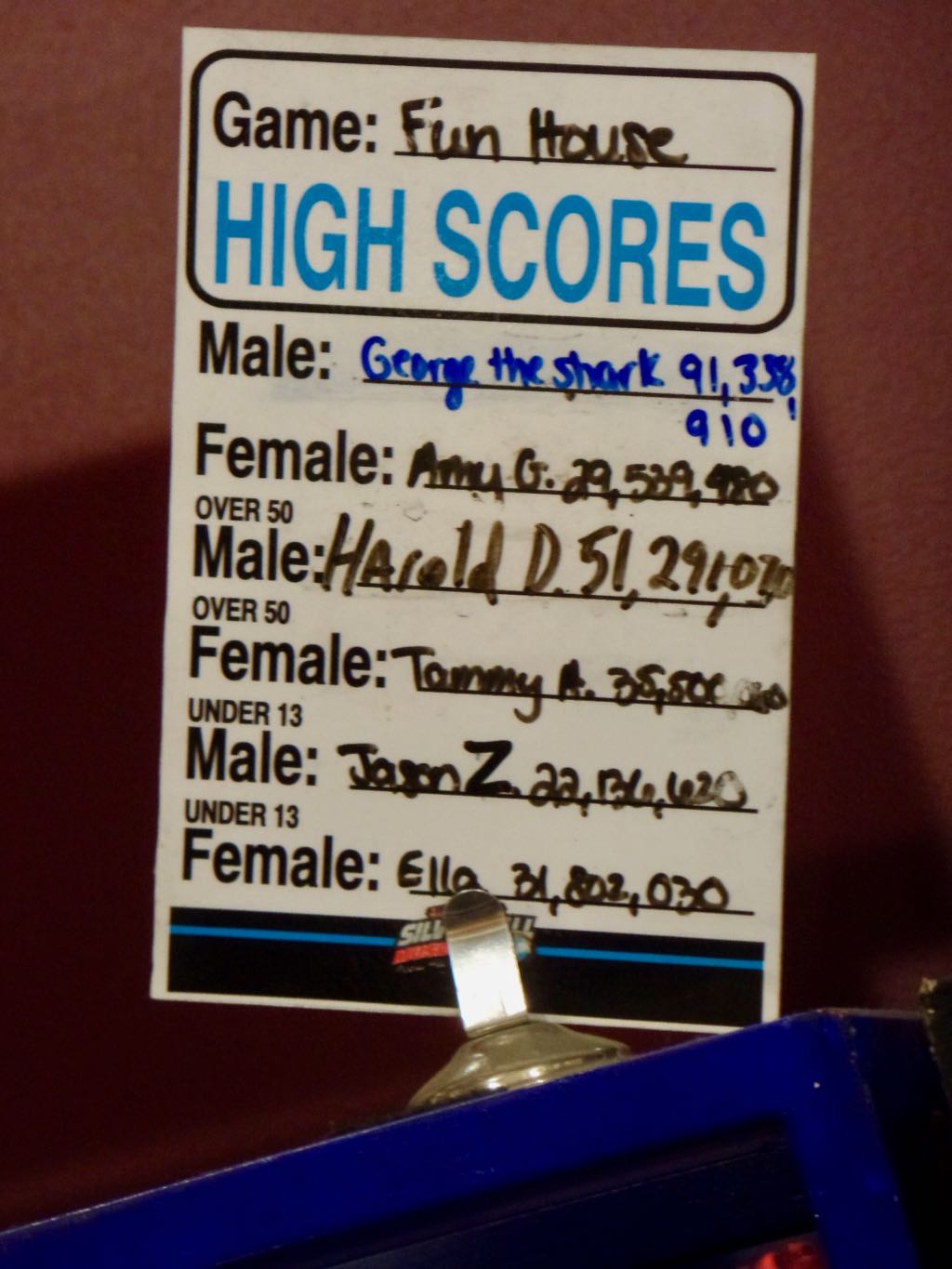 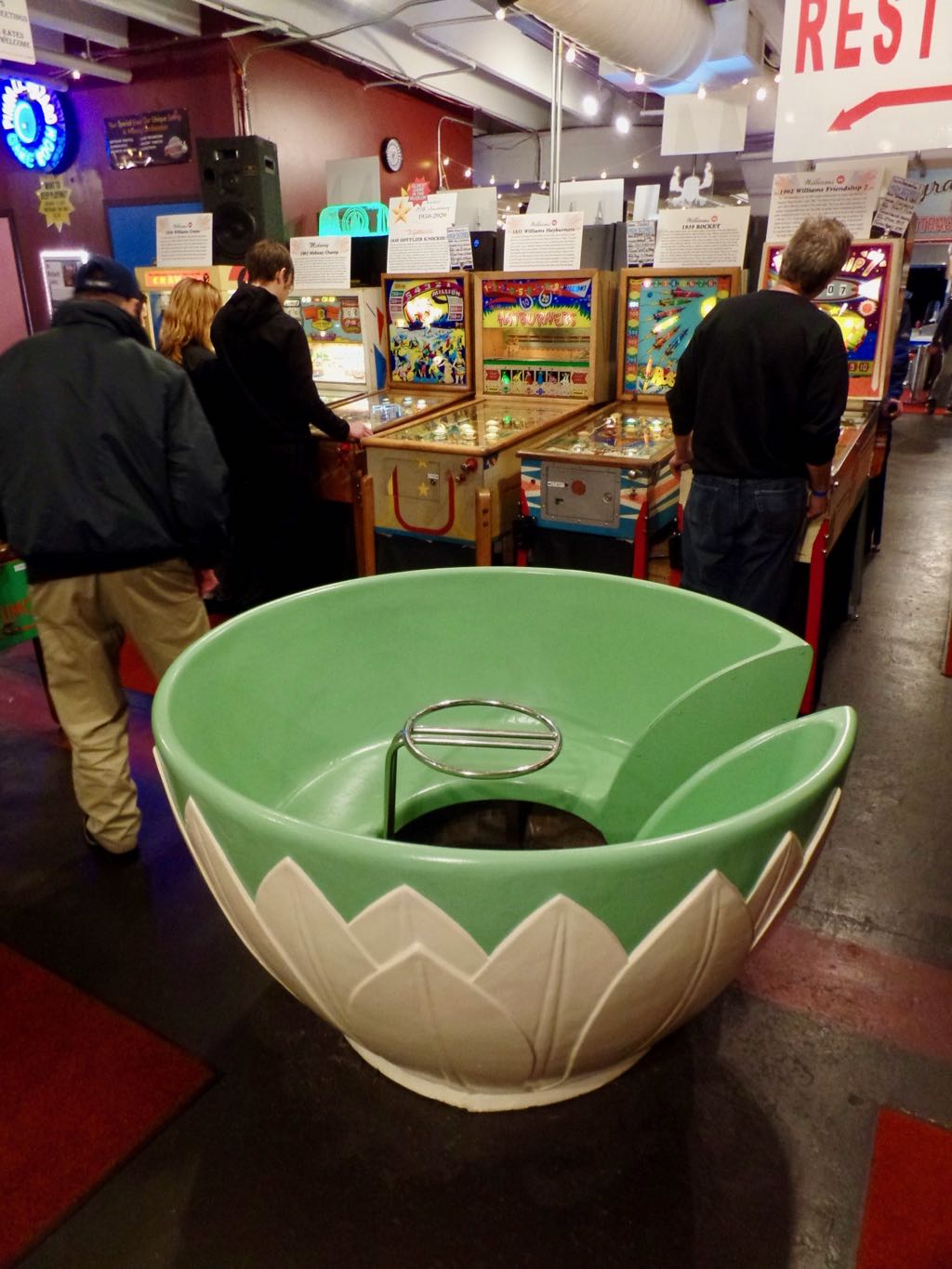 A teacup which I have assumed is from an old amusement park ride. I assume from Asbury Park's Palace Amusements, but they don't have it signed that I remember. 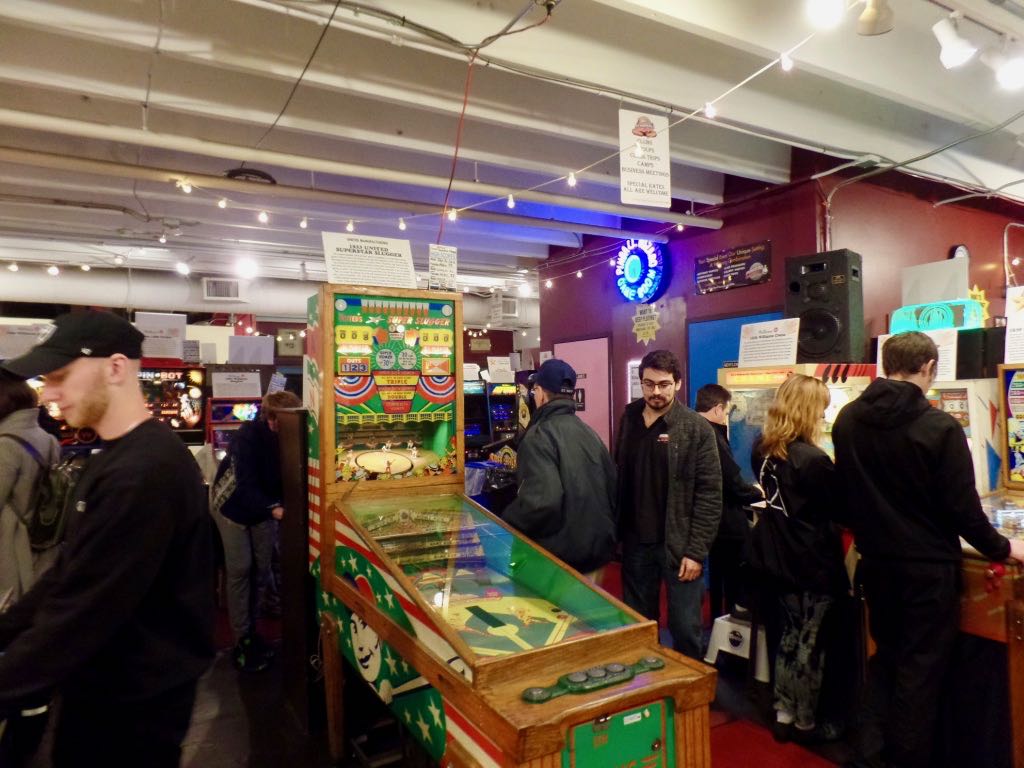 A Superstar Slugger, one of the pinball-like baseball simulator games out there. 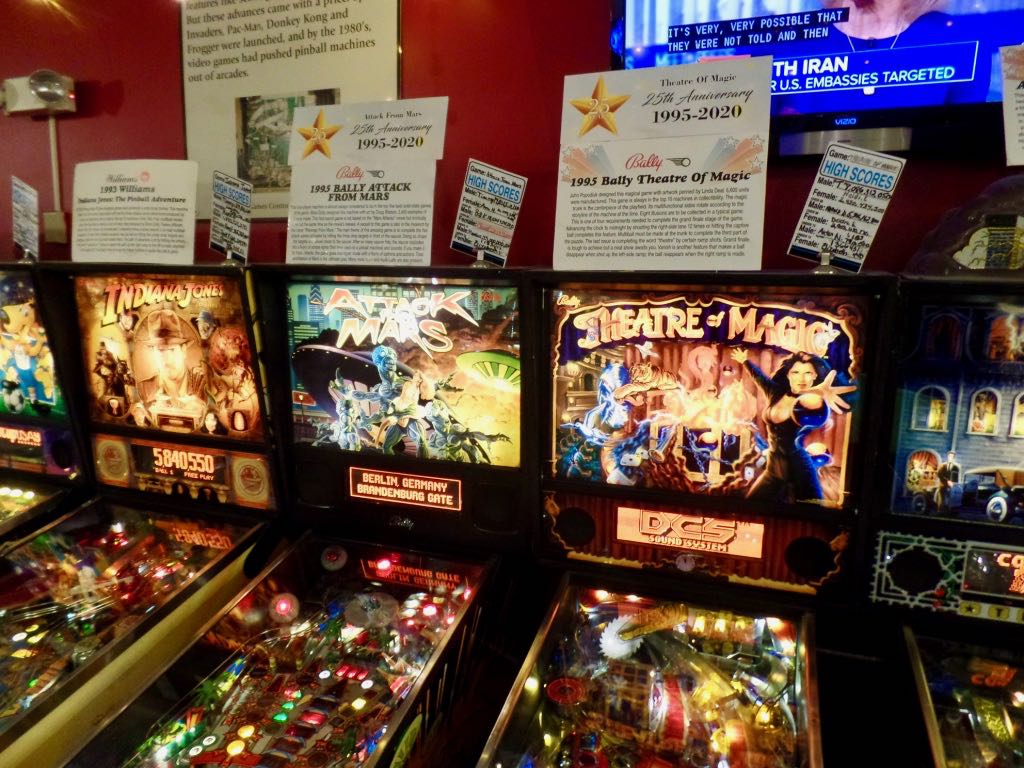 The 90s Williams row, along with two more of the signs for anniversary games. 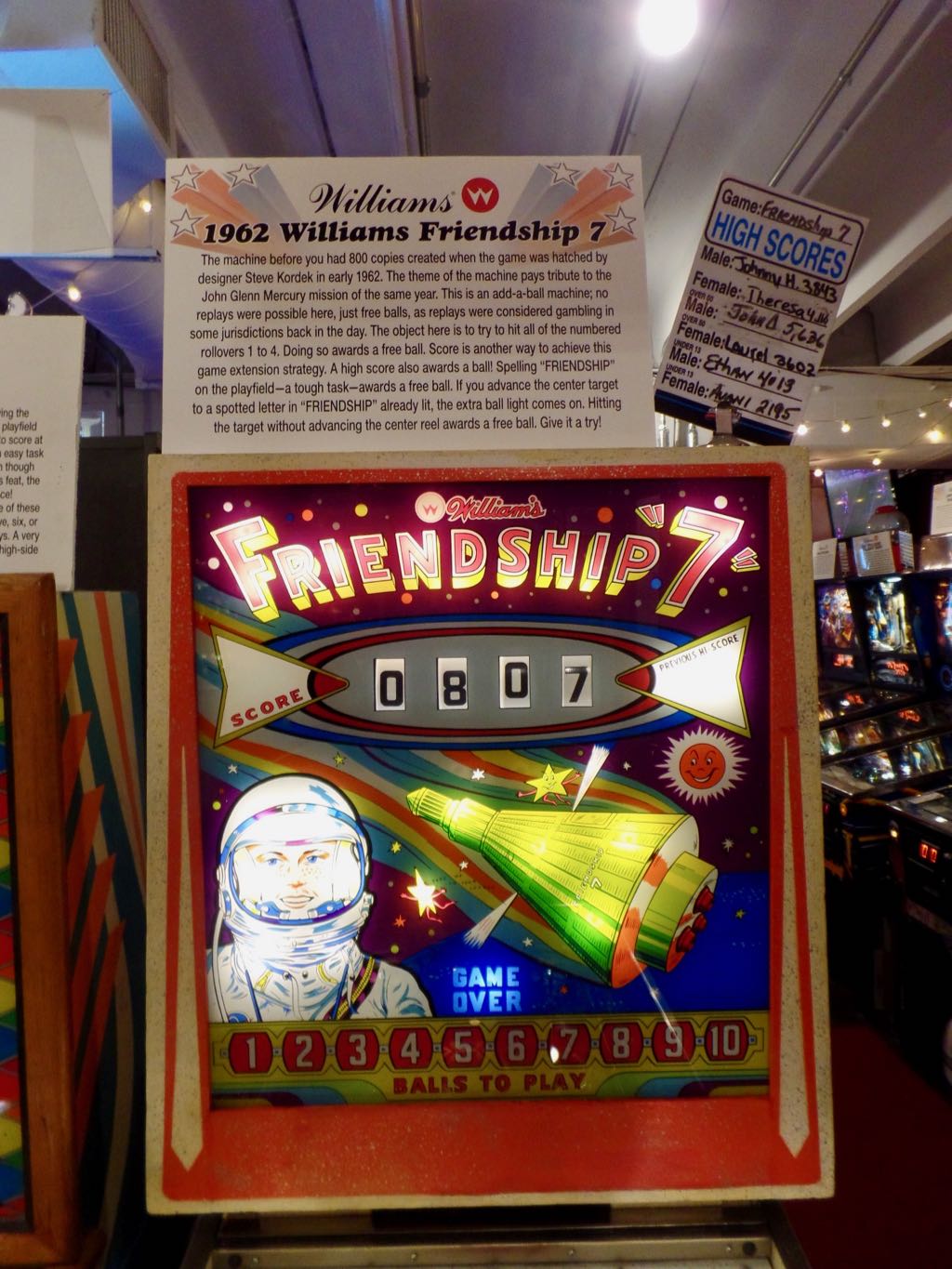 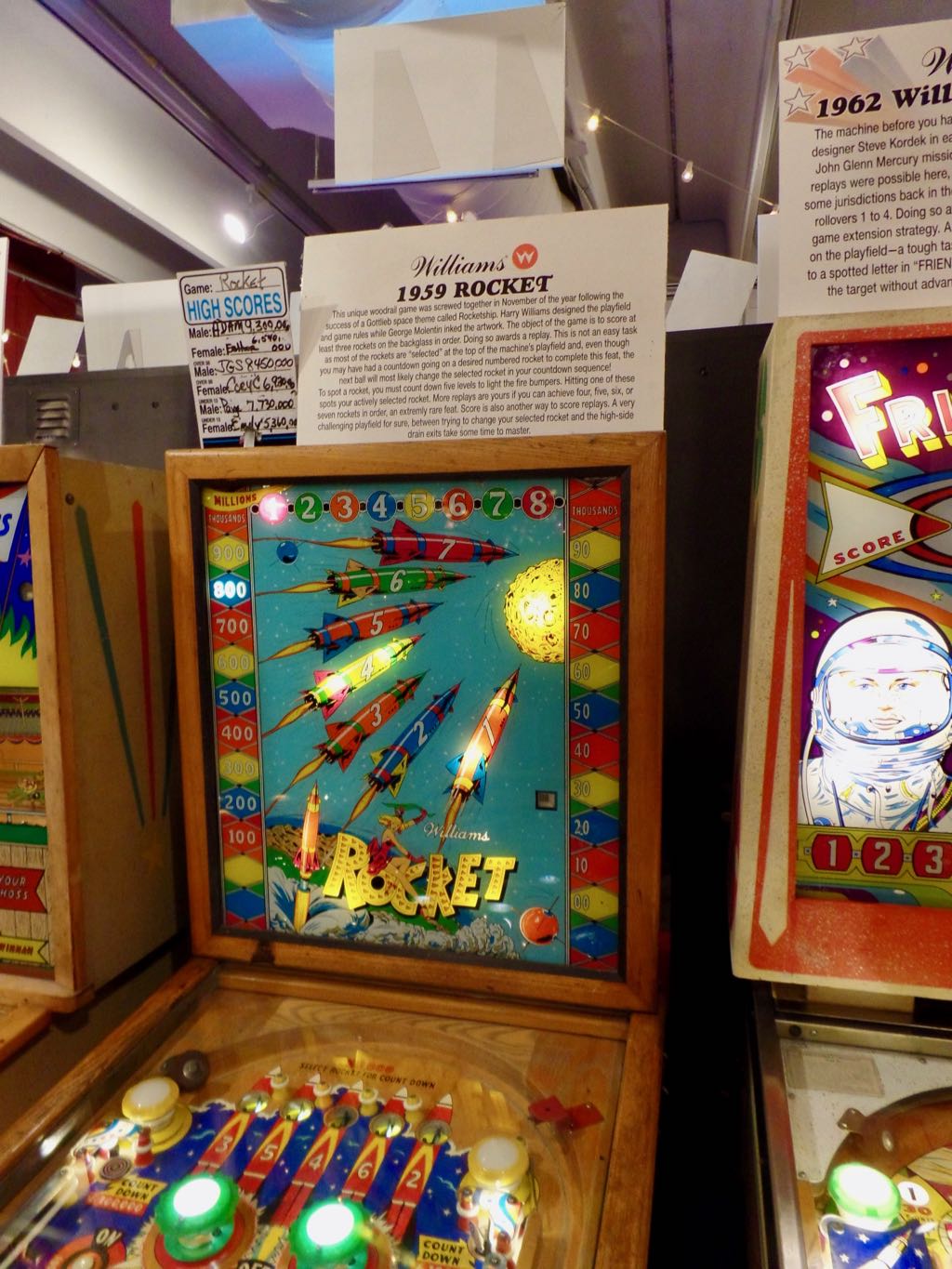 And an even older game, the lovely woodrail Rocket. Like many games of the era you can get replays from scores or from collecting rockets, essentially, as achievements. 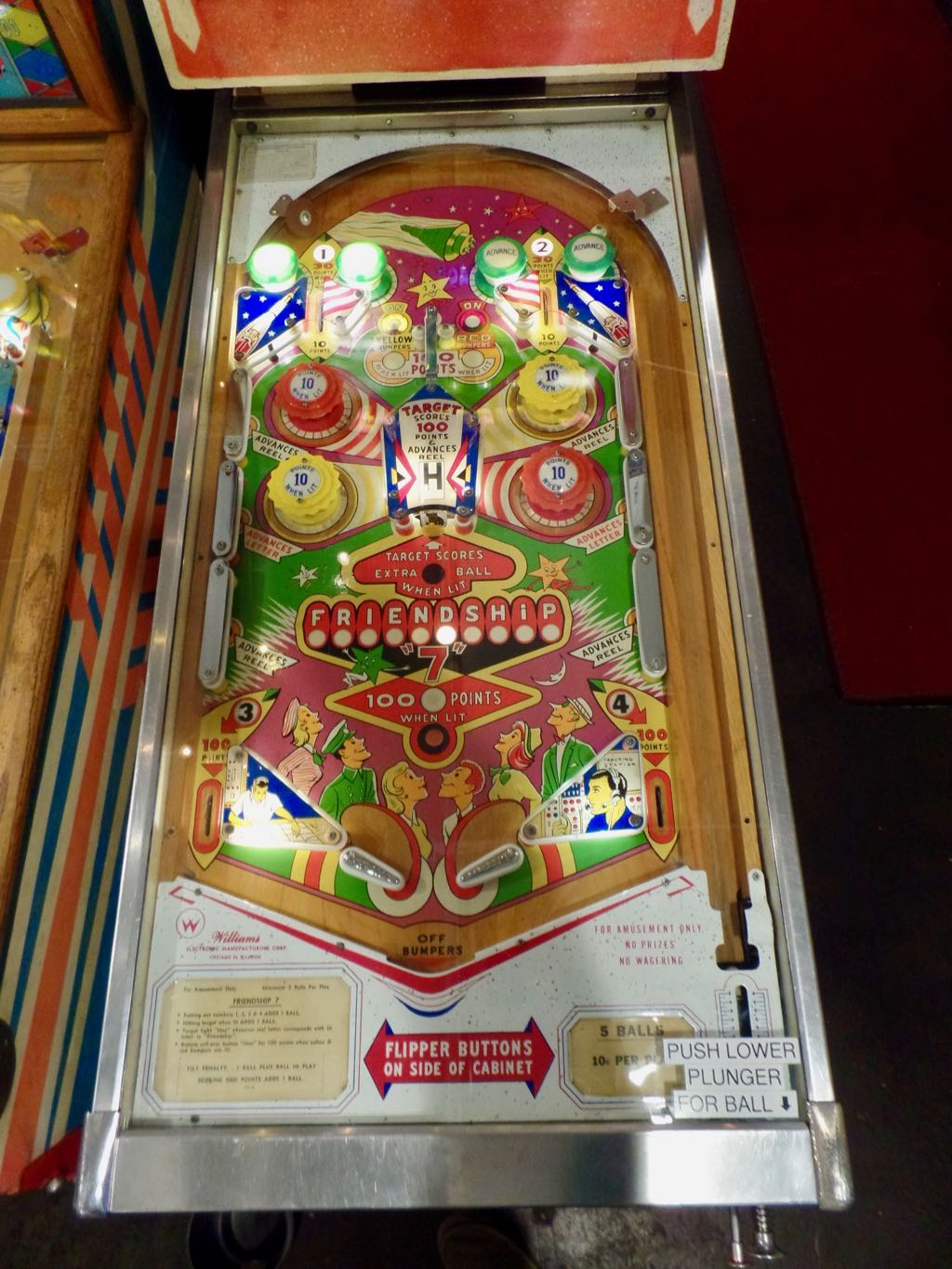 The playfield for Friendship 7, which fits the highly symmetric style of that era of game. 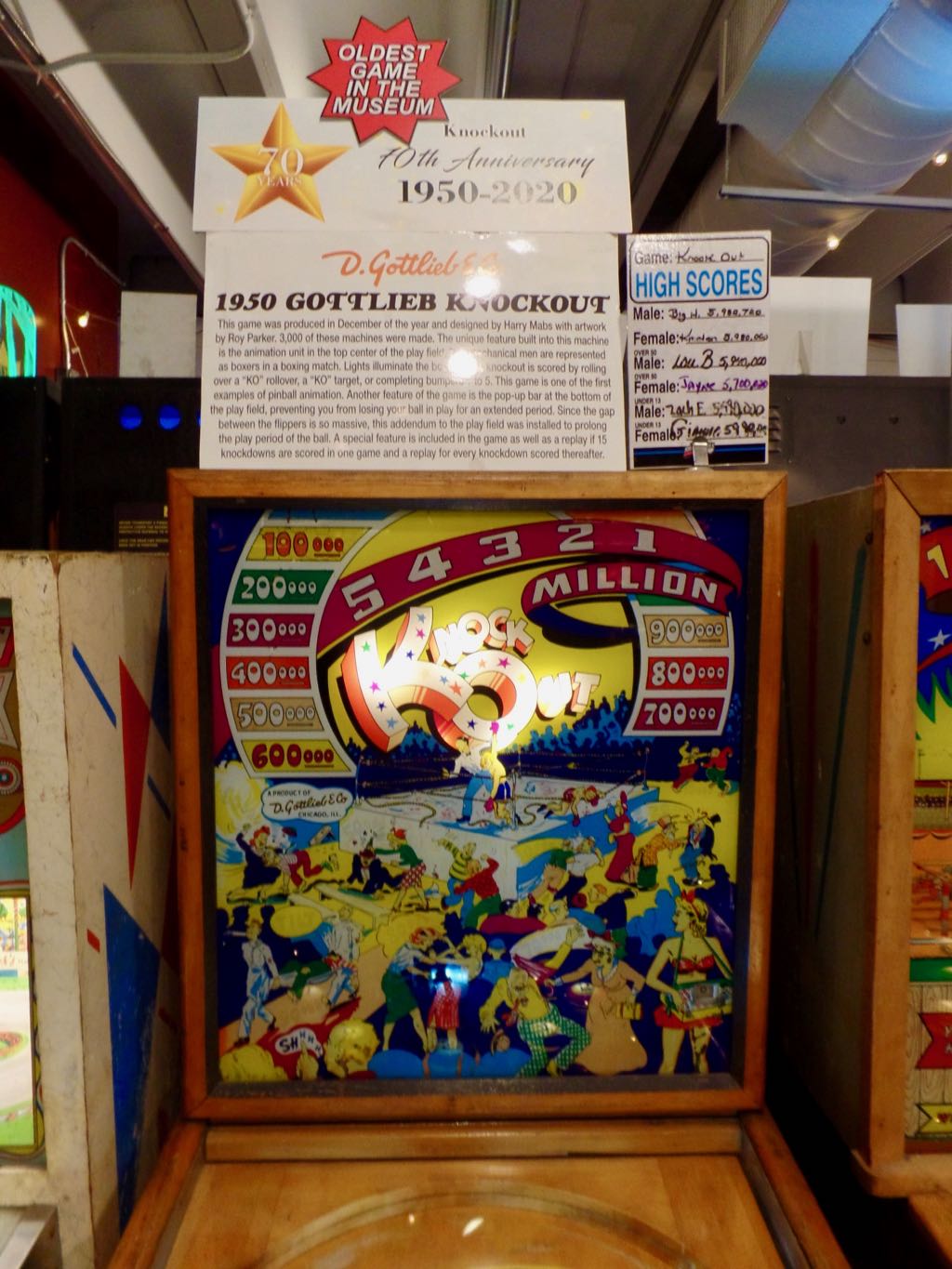 And here's their oldest game --- and an anniversary game --- the 1950 Knock Out. This is nothing like the Knock Out that's one of the pillars of my Fremont games. 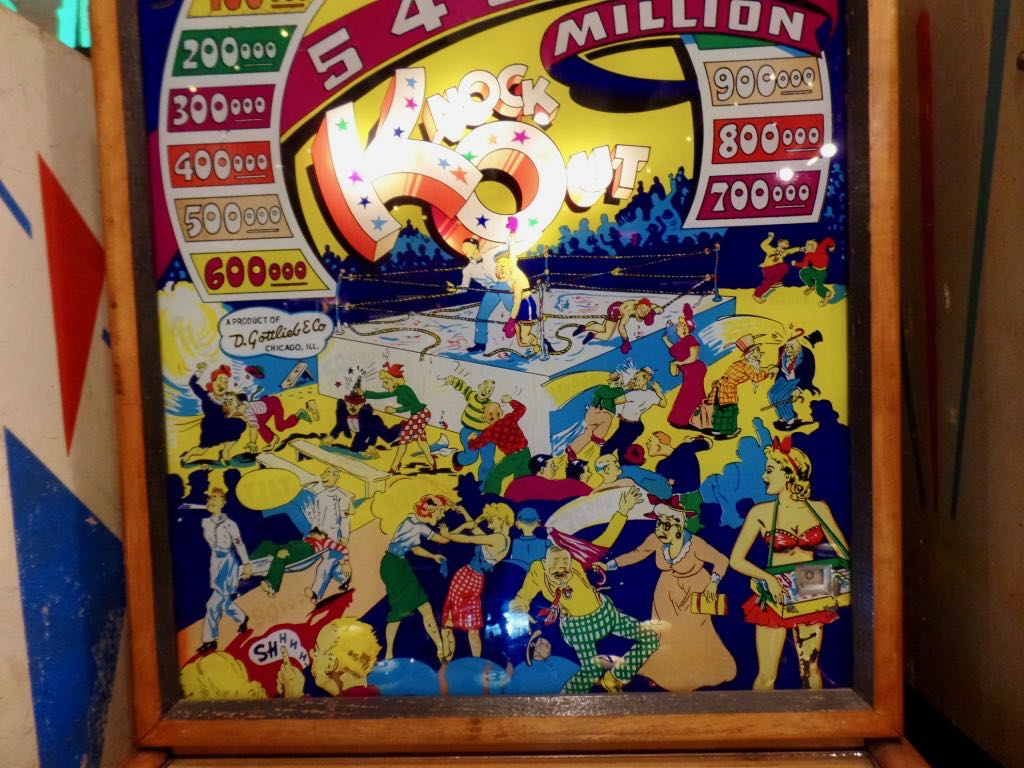 The backglass for the 1950 Knock Out, which shows off all sorts of mayhem outside the ring. Notice the credits counter in the cigarette girl's box; it's almost but not quite aligned to fit. 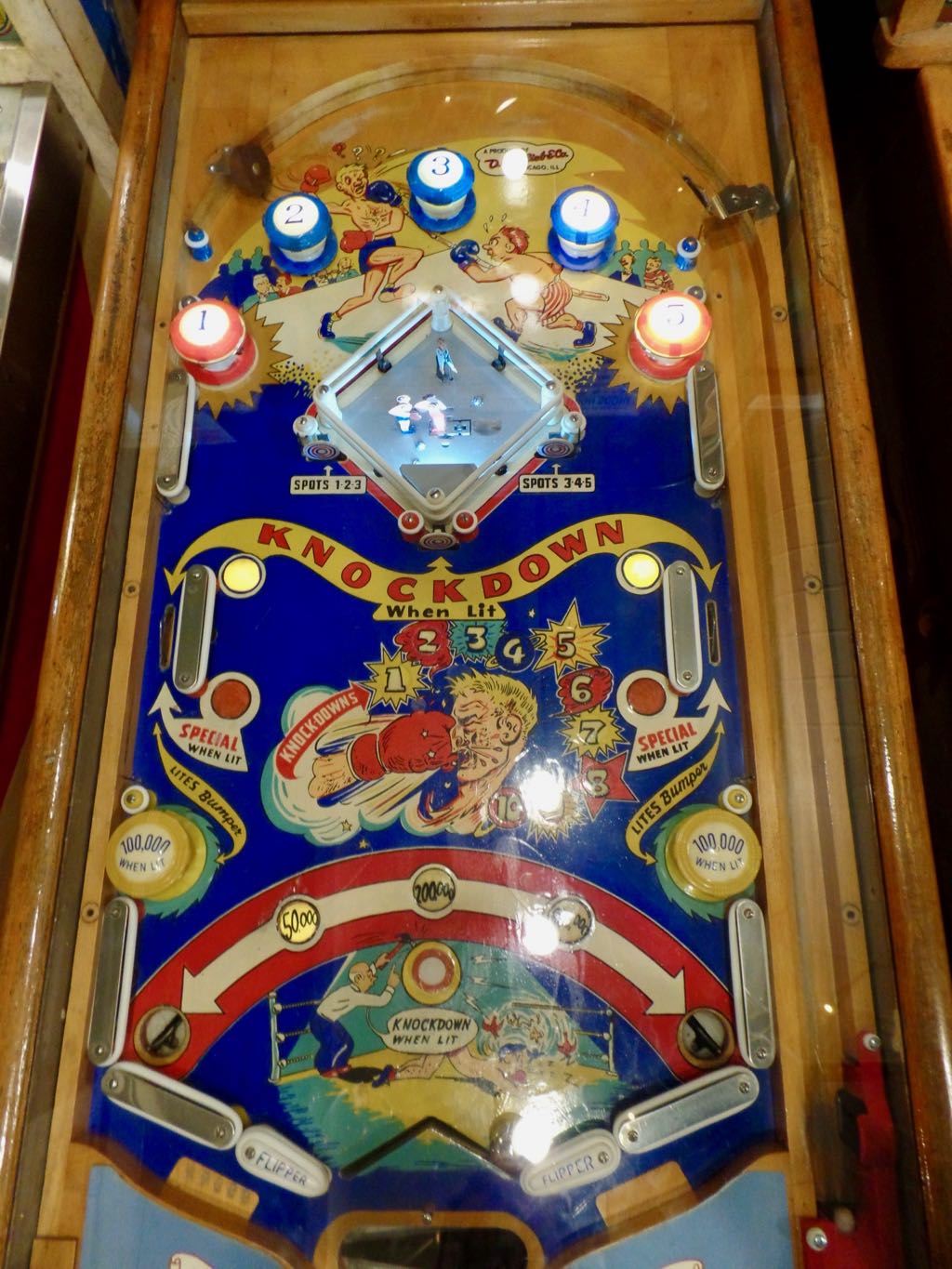 Knock Out's playfield. Like many old-fashioned pinball games the goal is to get a complete set of targets 1 through 5, and repeat. Note that the flippers are crazy far apart, but there's a metal wedge that can pop up and make the ball impossible to lose except by your own bad play. I'm curious when that sort of drain blocker element will return to pinball.

Trivia: In 1940 the Soviet Union harvested 95.6 million tons of grain. In 1942 it harvested 26.7 million. Source: The Taste of War: World War II and the Battle for Food, Lizzie Collingham.

Currently Reading: Cracking the Cube: Going Slow to Go Fast and Other Unexpected Turns in the World of Competitive Rubik's Cube Solving, Ian Scheffler. It's fascinated me how much the competitive-cube-solving community seems like a parallel-universe version of the competitive-pinball community. Rubik gets quoted a bit about the differences of various sports and how cubing is one that's well-balanced between physical requirements and mental requirements (picking what moves to do, executing them quickly and precisely). Pinball's like that too; so much of the game is mental, knowing what to do next and how to recover if something goes awry, but also that you need reflexes and at least some nudging game. That so much of cubing also involves not moving faster than you know what you're doing is also similar. So I wonder how much of these parallels draw from being very loosely similar demands on mind and body.