Just by the pleasure it gives here on Earth

So we reach the end of the Year of the Rat. Its start was the first time that Covid-19 really touched our lives, as it caused the mall to cancel the Chinese New Year parade and talent show. We weren't sure that was why they did it --- they just said it was ``postponed'' without explanation --- and it felt, to me, like this was overreaction, given there were maybe one or two cases known in the Detroit area.

I hope when this is all done they have their Year of the Rat parade, and then a Year of the Ox, to make good on the promise that these things were not destroyed but just put off to safer times.

So here from January 2020, before everything was bad everywhere, more of the Silverball Museum in Asbury Park. 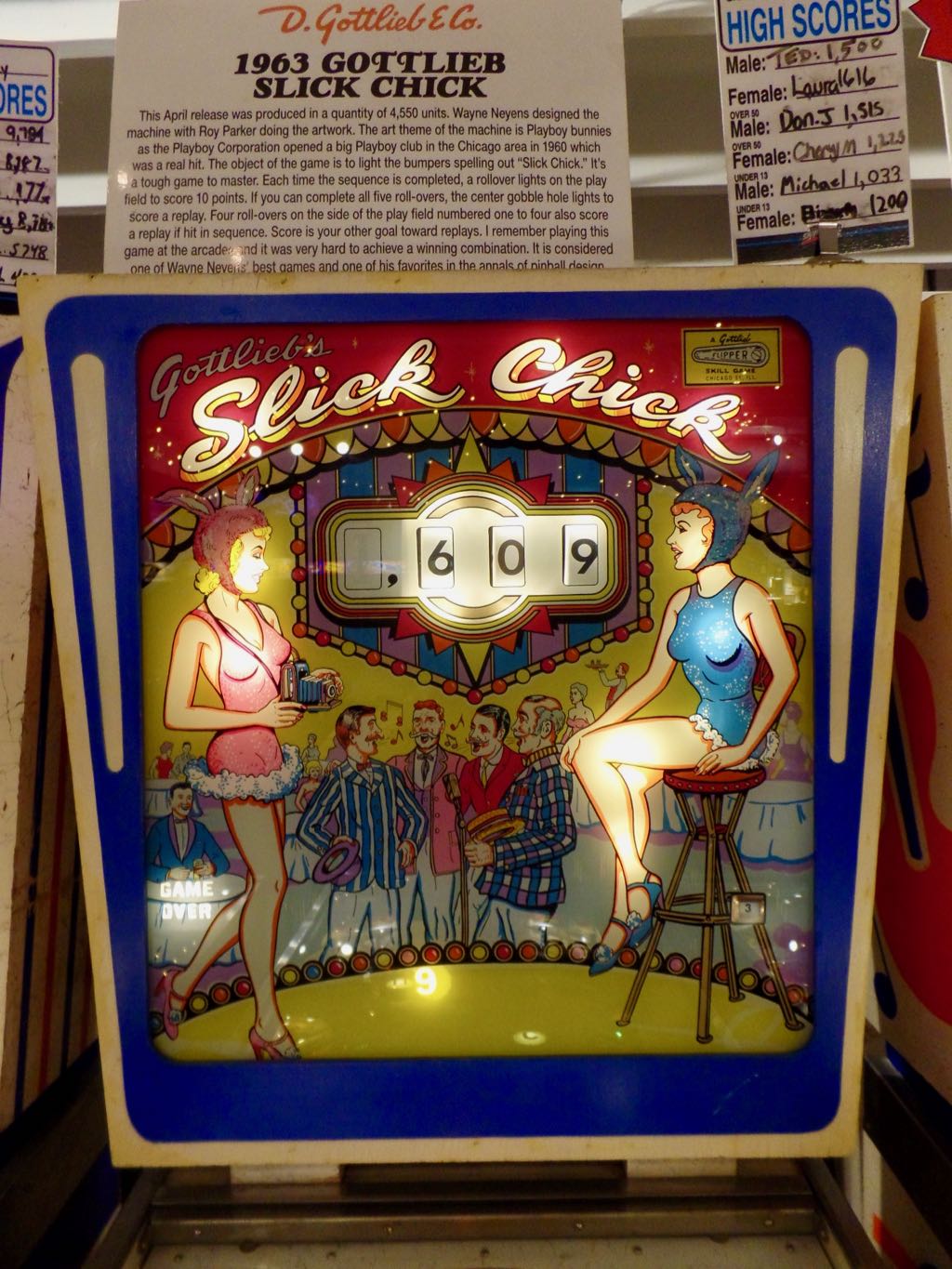 I know I photograph this every time I visit the Silverball Museum but I just love seeing the Background Characters of Mary Worth singing on the backglass there. Also, for playing just the one game, I did pretty well; double that score would at least beat some of the high scores. 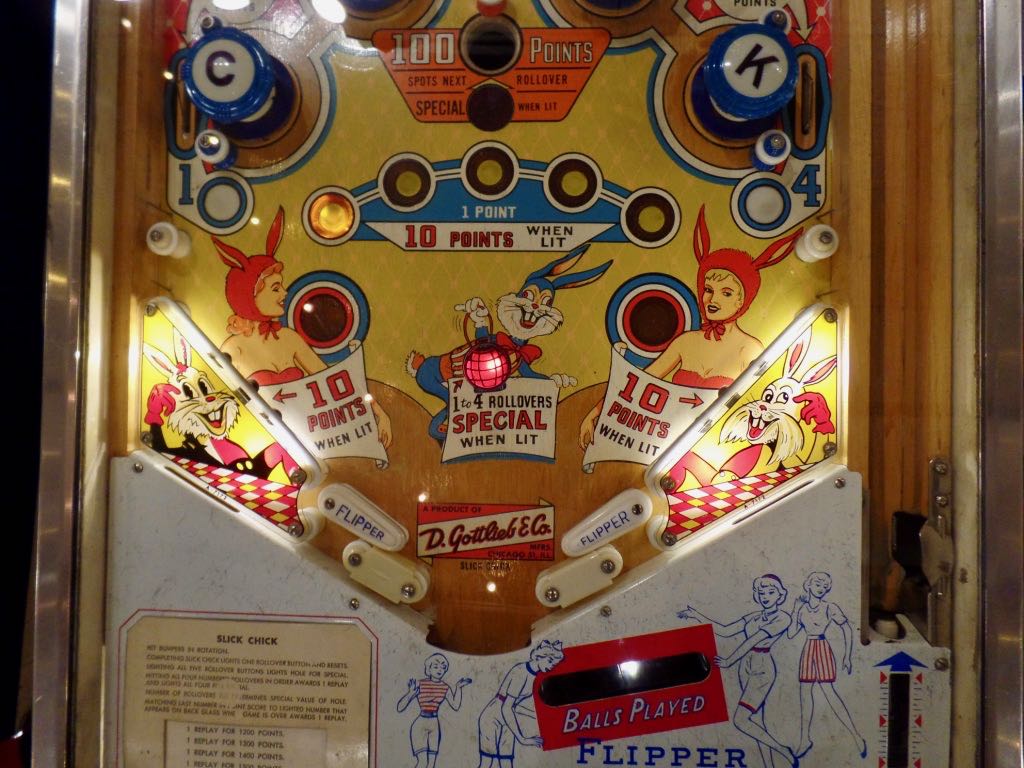 Lower playfield of Slick Chick, which combines women in rabbit costumes with rabbits I can't explain in any way. 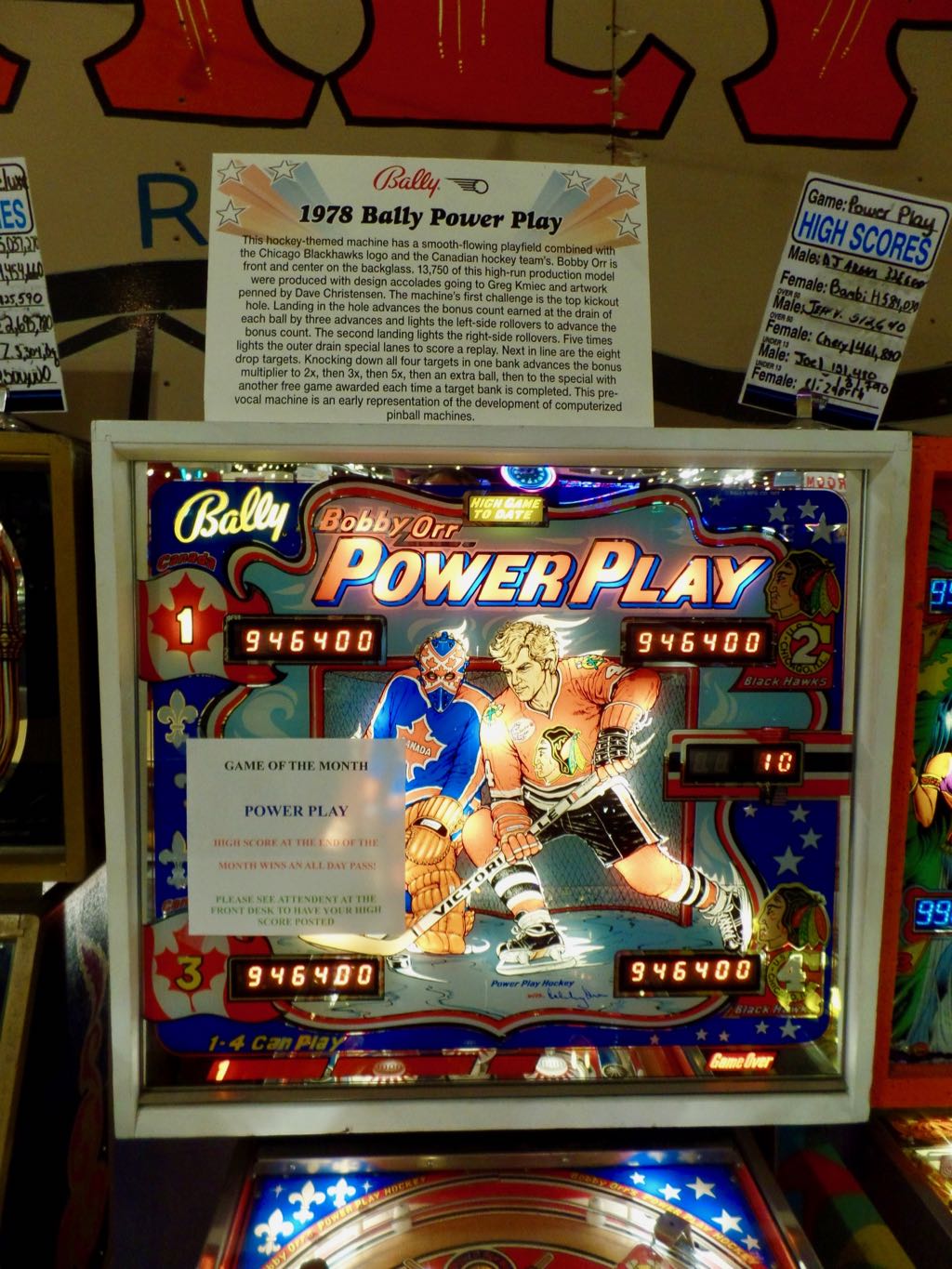 Another game of the month, Bobby Orr Power Play, which is wonderful in that it starts up with a stirring bit of 8-bit fanfare. Also horrible in that either the scoop at top kicks the ball back into the scoop, so you have a great game, or it kicks it to a center drain, so you have an awful game, and there's nothing you can do about either state. 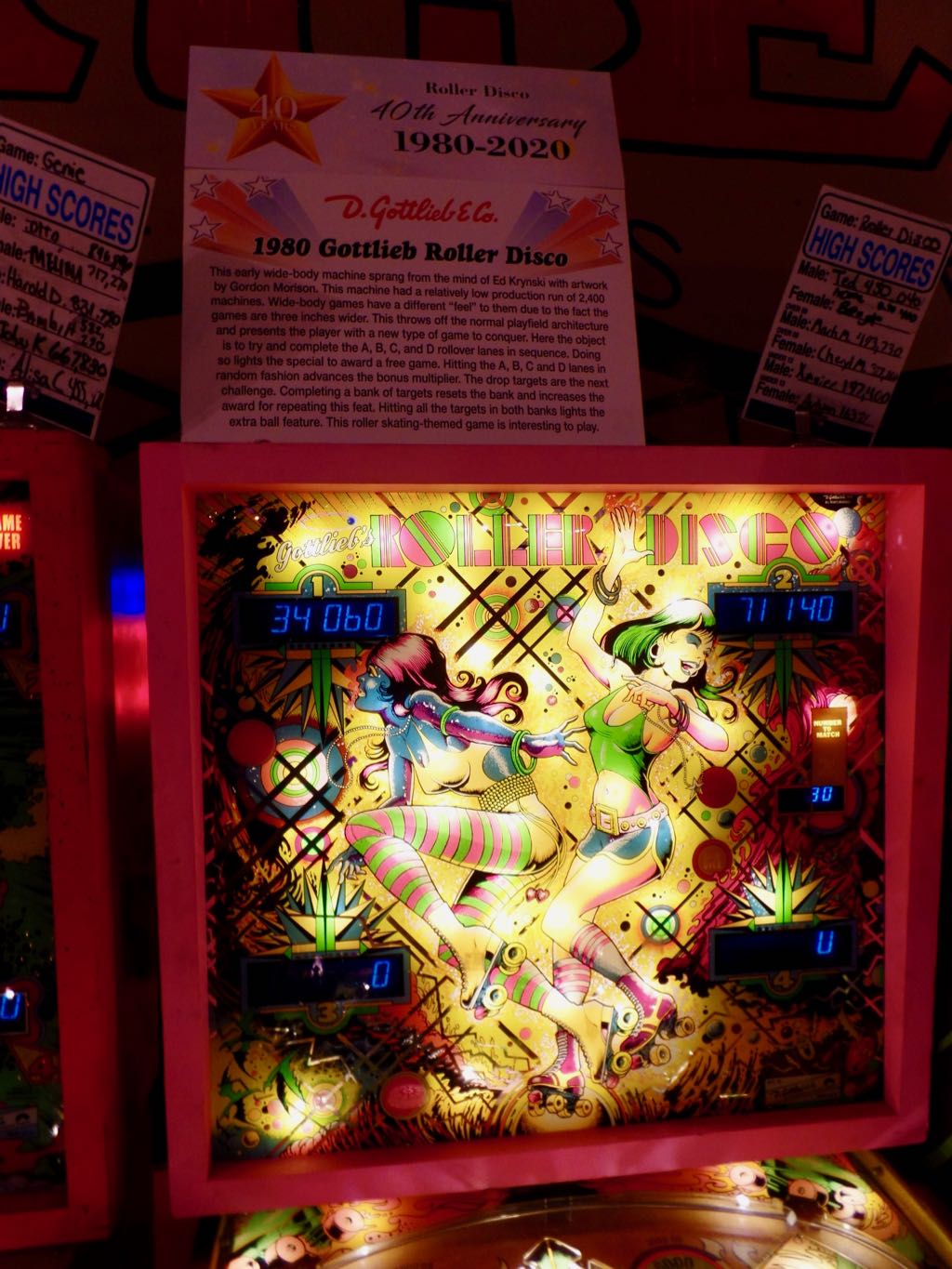 40th anniversary of Roller Disco! Which I last photographed at Pinburgh 2019. The backglass remains wonderfully colorful. 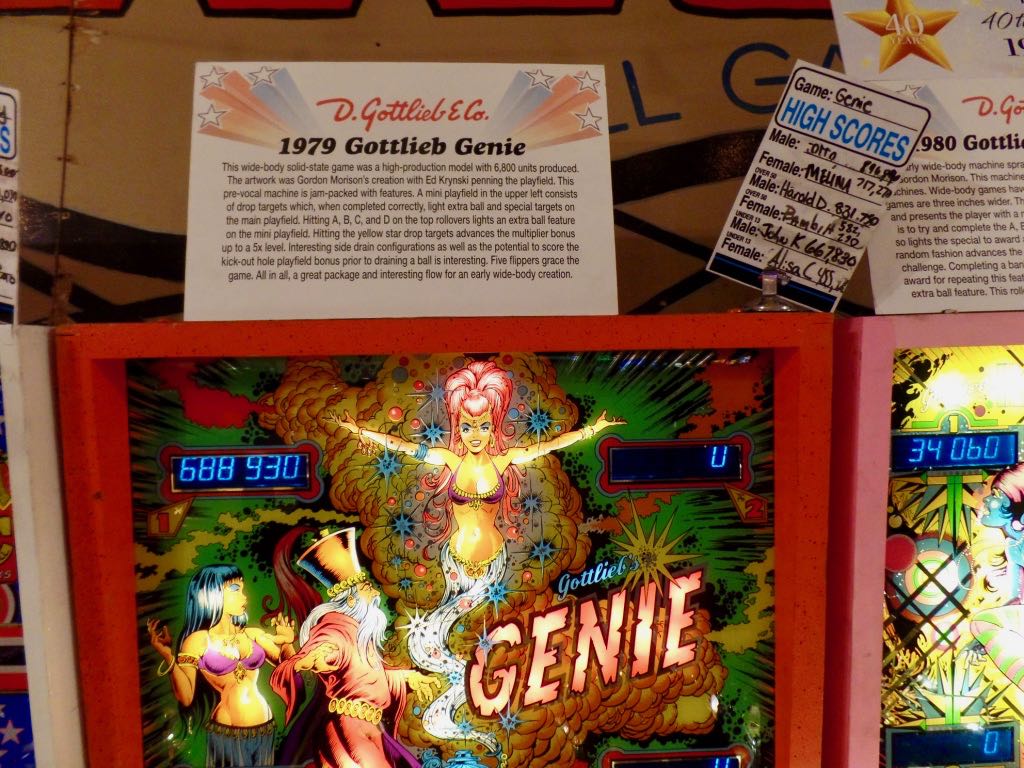 I played more than one game on Genie, but also, I got satisfyingly close to a high score on it. Since this was the weekend before State Championships, I was feeling pretty good about my chances. Note that I think none of the games at the Silverball Museum were in the State Championship, and if there was any overlap they were different instances of the tables, but still. Good play is a comforting thing. 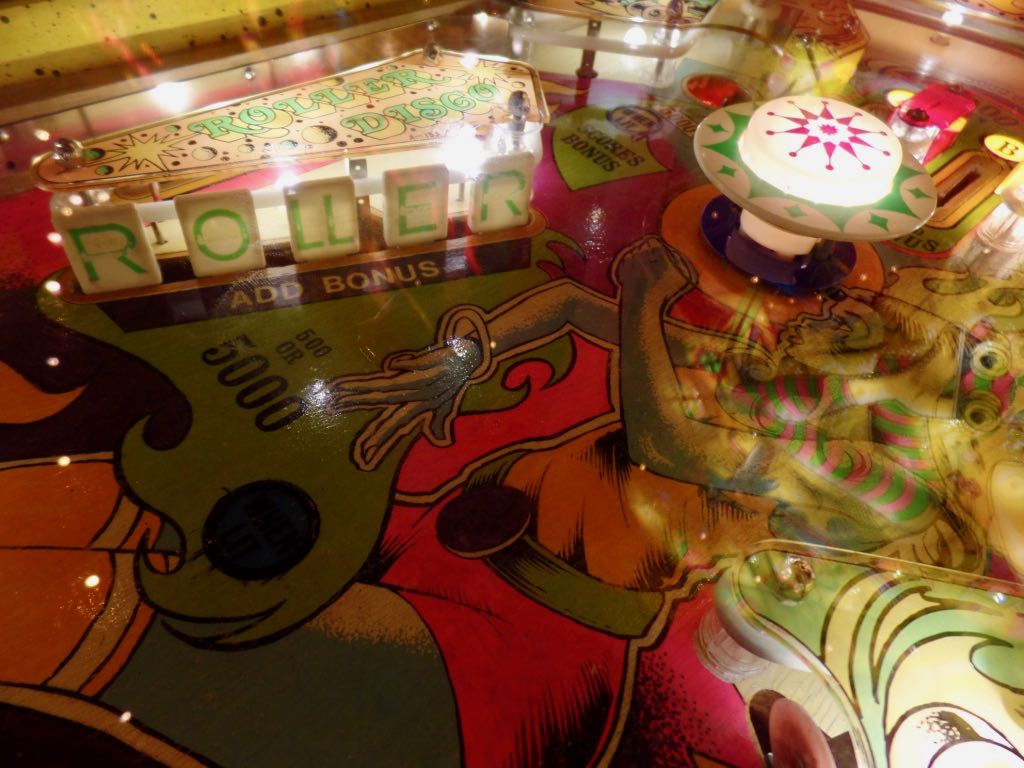 So how do you fit the letters of ``Roller'' on when you only have five drop targets? ... Which seems to put the lie to the story that the designers of Barracora realized doubling the R's on one drop target was an innovation that fixed that design problem. 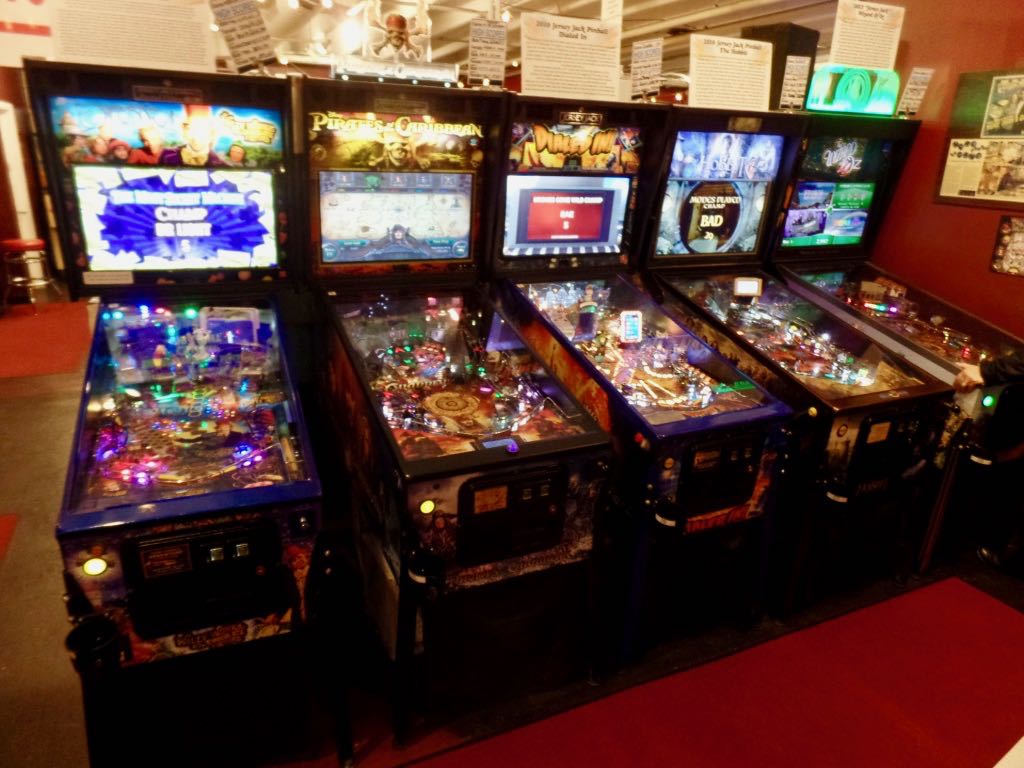 Jersey Jack Row. The Silverball Museum had all the games made by these guys, who're just down the highway some. Jersey Jack's released another game, Guns and Roses, since then and I assume they've added that too. Jersey Jack games usually treat me kindly. 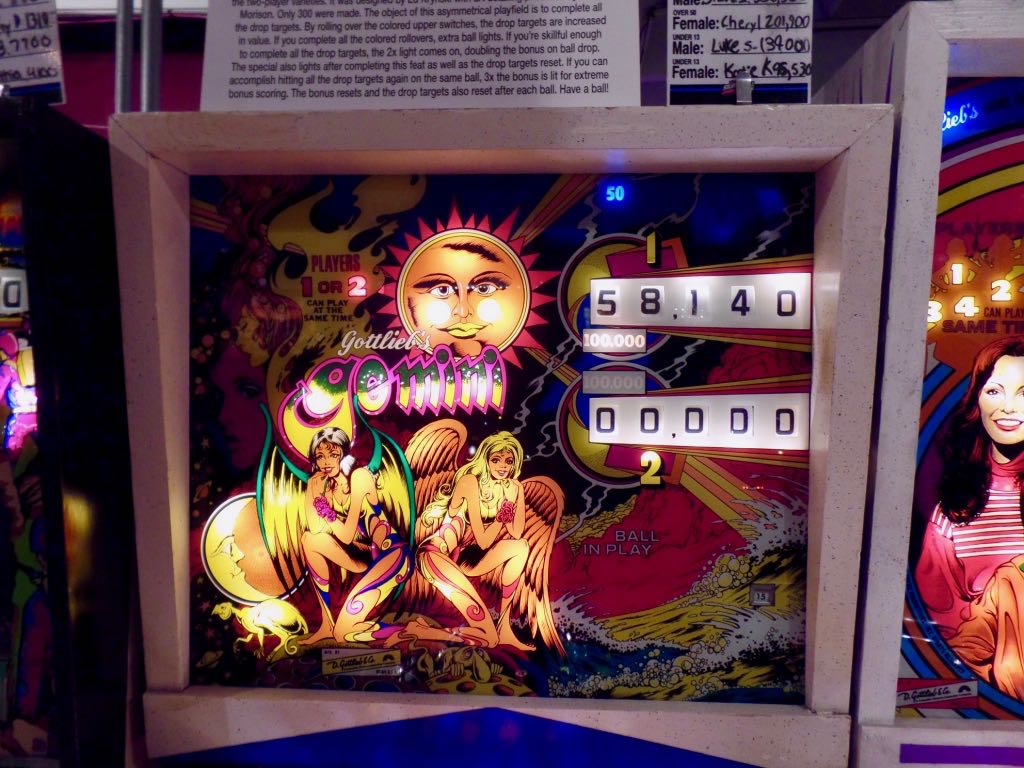 The backglass of zodiac-themed game Gemini. I do love the games that just embrace a weird theme like this. Top Score, the two-player version of 300, a game that wrecked a come-from-behind run at Pinburgh 2018 for me. Note the 'bowling ball return' machine in the backglass; certain shots push a ball up into the lane there, and each of those is good for a thousand points bonus. Which would have made all the difference if the game hadn't tilted on me. 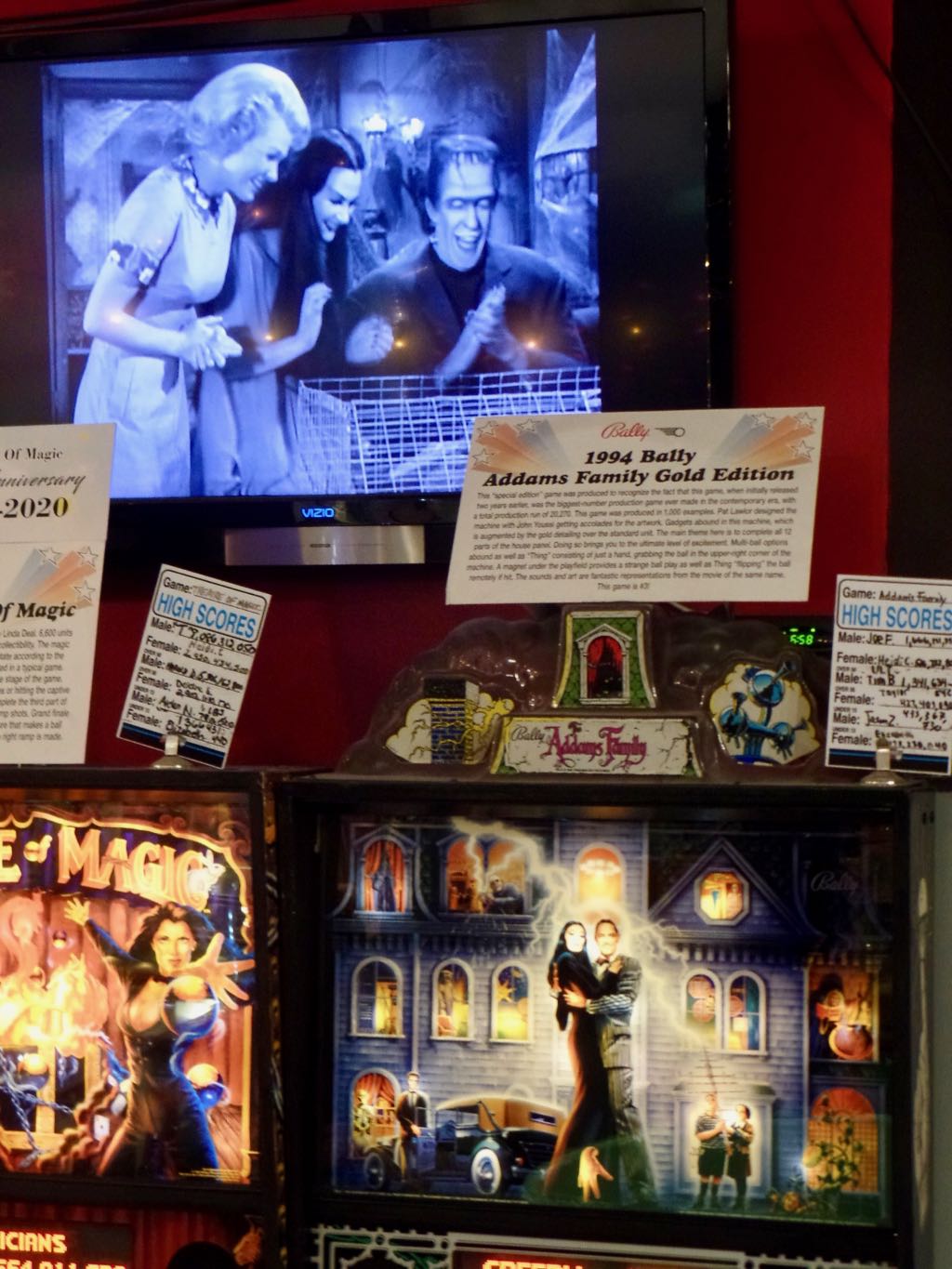 Apart from Jersey Jack games the Silverball Museum doesn't get in modern pinball games often, but hey, look, they've got the Munsters, right next to the Addams Family! Nice. 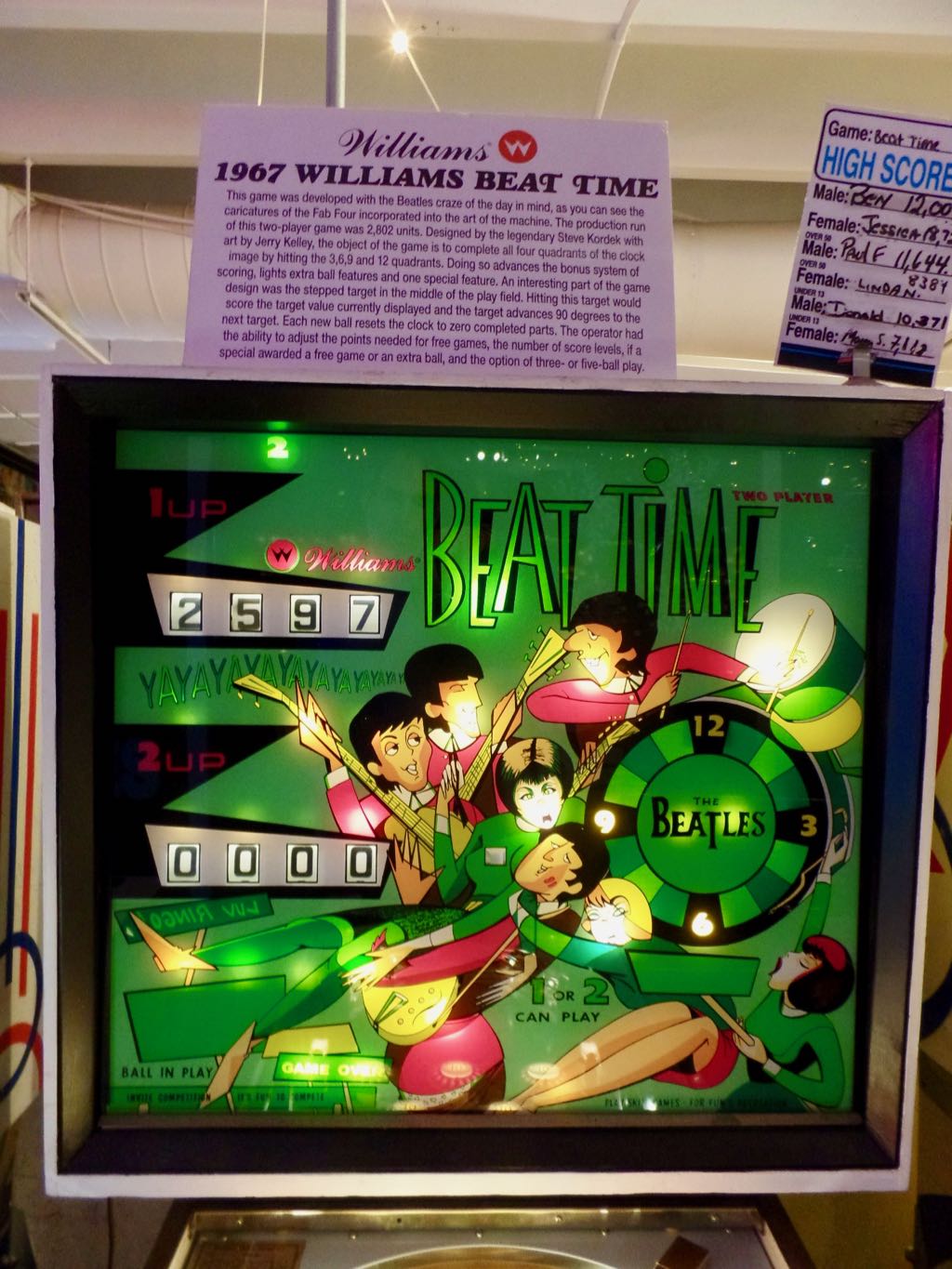 Williams's 1967 Beat Time, with a fan-made backglass that makes it even more plain what they were going for. 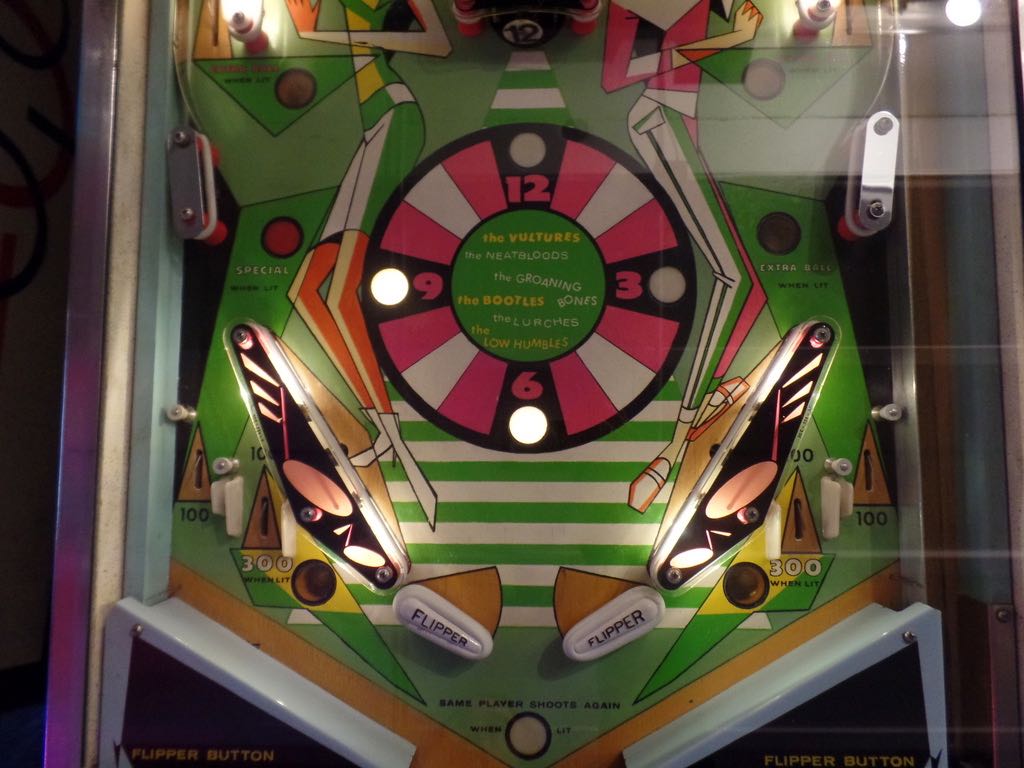 The lower playfield of Beat Time with the original fake band names, all of which are funny enough to have been mentioned in a 1966 sitcom. I can't think who the Lurches and the Low Humbles are spoofs of, and I keep feeling like I know who the Neatbloods are a riff on, but I can't get it off my tongue.

Trivia: In a letter written in 387 CE, Augustine noted that the Alexandrian churches were observing Easter the 25th of April; Roman churches, the 18th of April. And the Arian churches in Gaul observed it the 21st of March. Source: The Calendar: The 5000-Year Struggle to Align the Clock with the Heavens --- And What Happened to the Missing Ten Days, David Ewing Duncan. Augustine noted this ``angrily'', says Duncan.

Currently Reading: A Square Meal: A Culinary History of the Great Depression, Jane Ziegelman, Andrew Coe. Which by the way was a Christmas present from

bunny_hugger, though she worried it'd be too downbeat a thing, and then she got home and saw me reading The Taste Of War, about food in World War II, so was assured this would be good.