The creme de la creme of the chess world in a

So our physician left Lansing a couple years ago, off to Chicago to be closer to Midwest Furfest, I imagine.

bunny_hugger found a replacement and has gone to see her several times. I never got around to it, mostly because I'm in good general health and then after the pandemic hit routine checkups for everything seemed off for a while.

But, given the dire news? And that we'll be facing the world of COBRA-based insurance or worse? I made my checkup appointments. The dentist next month and a physical in early May. I'm hoping that it all turns out there's nothing much to worry about. We've got enough worry coming.

Our pet rabbit and pet mouse are due at the vet's tomorrow for their checkups. They hadn't had any last year, and we might have put things off a few more months this year if we weren't worried that the mouse has fur mites. We're hoping that turns out to be nothing significant, or at least something easily treated.

So did you guess what the next thing I took a bunch of photos was? It was the State Championship Series for pinball. I was in at 12th seed, and

bunny_hugger in at 22nd, and I would go on to win my first round, which is what I was hoping for. 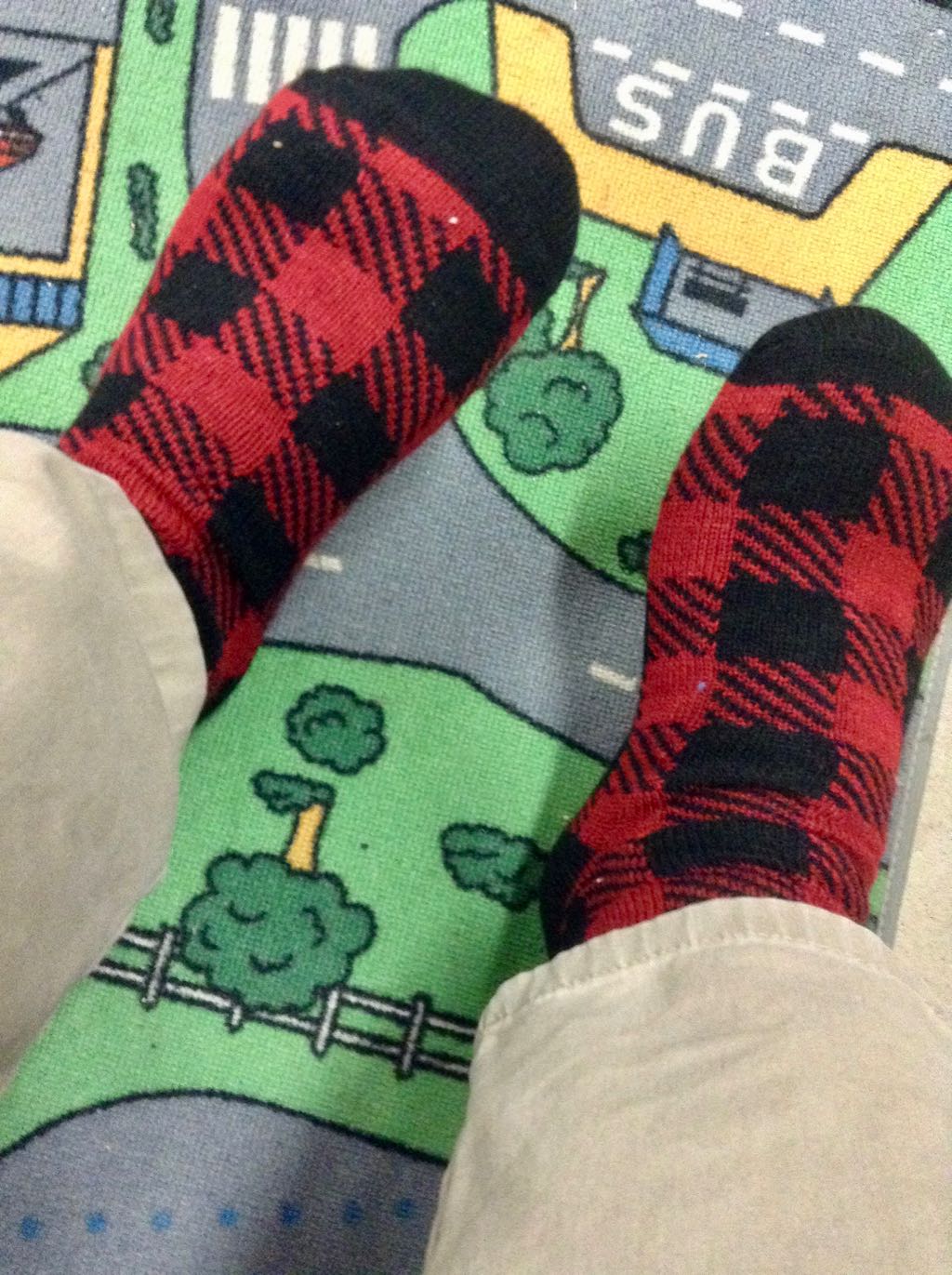 My feet all heavy-socked up for the State Championship Series! AND, hosting, had it in his concrete-floored garage and basement and it was January and while it was warm for January it wasn't that warm. We'd been warned, though. And hey, I get to tower over a cartoon city, that's always fun. 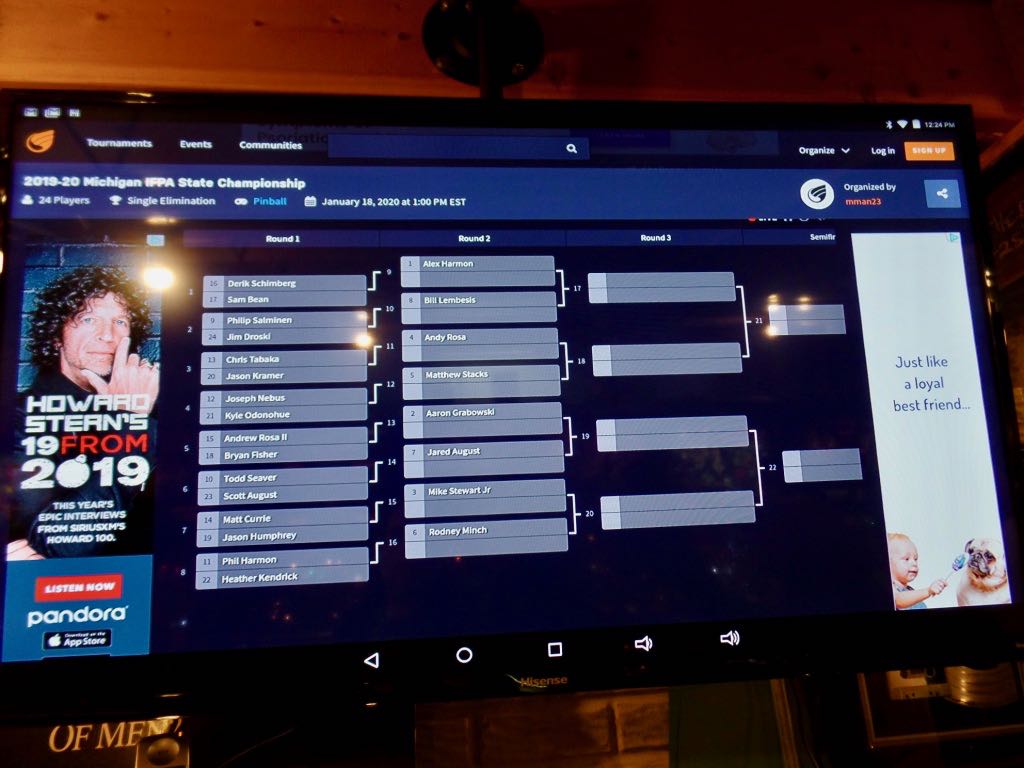 The seeding. Michigan had enough players and events to have a top-24 playoff, with the top eight players getting a first-round bye. The happy news here, though? Because of the breakdown?

bunny_hugger and I could not possibly play against each other unless we were the top-two finishers. That took a load off. 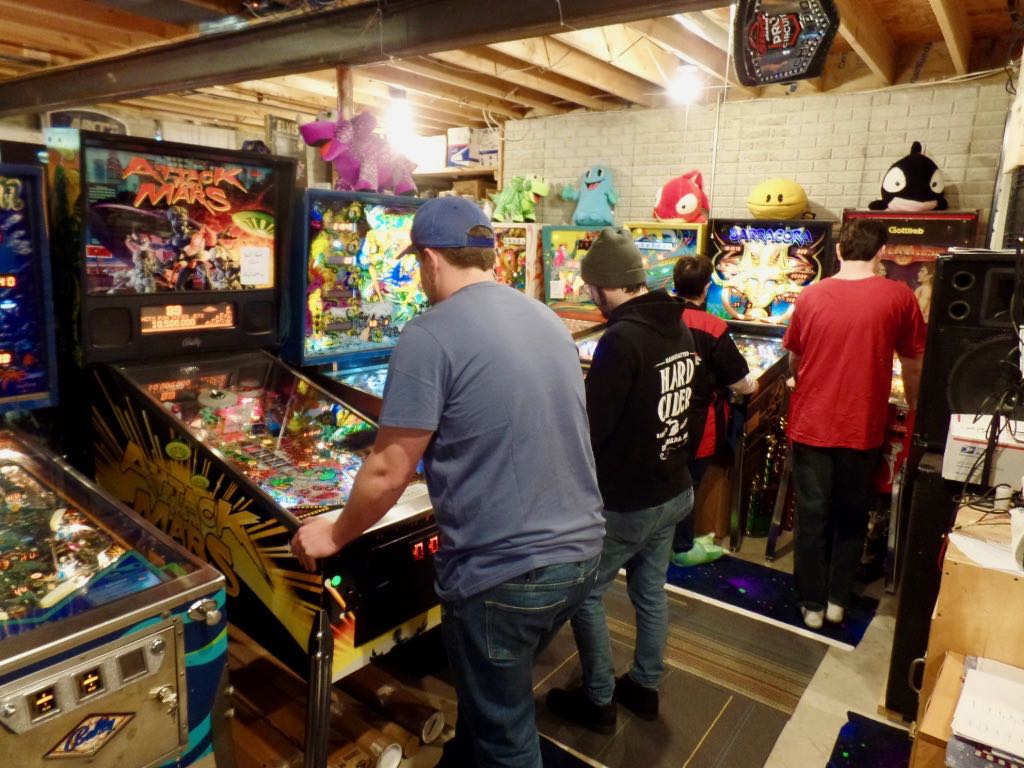 Competitors at play in the basement. It was a pretty cramped space but had, to my tastes, a great selection of games. You can see

bunny_hugger in the back playing Barracora, a game she's much better on at Fremont on the other side of the lower peninsula. 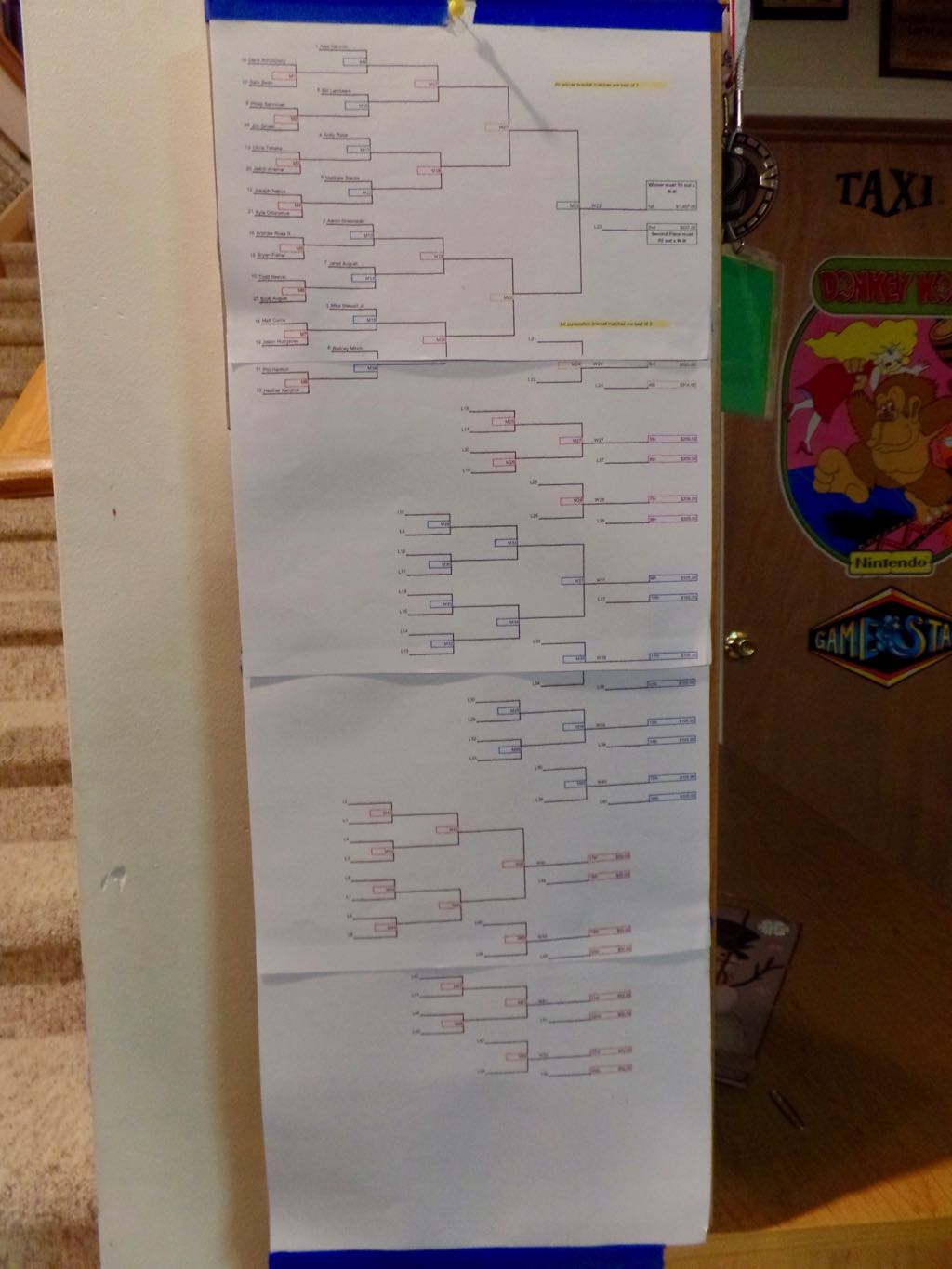 How it started ... The paper printout of all the possible matches, so people could keep track even if they didn't know the Wi-Fi password. 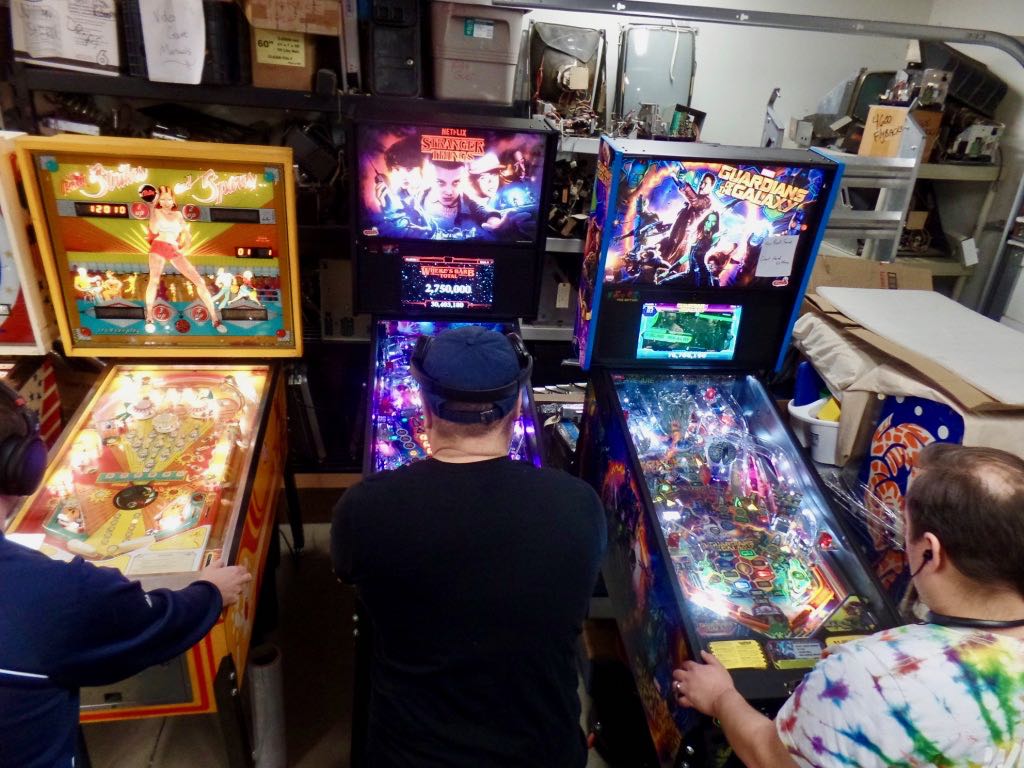 Garage games. Stranger Things was maybe a month out from its release when it appeared in finals here; folks barely had the chance to learn the rules. Guardians of the Galaxy would serve me nicely in two of the four rounds I played. Strikes and Spares, on the left, I did not get the hang of until very late in the day, but I got to quite like it. 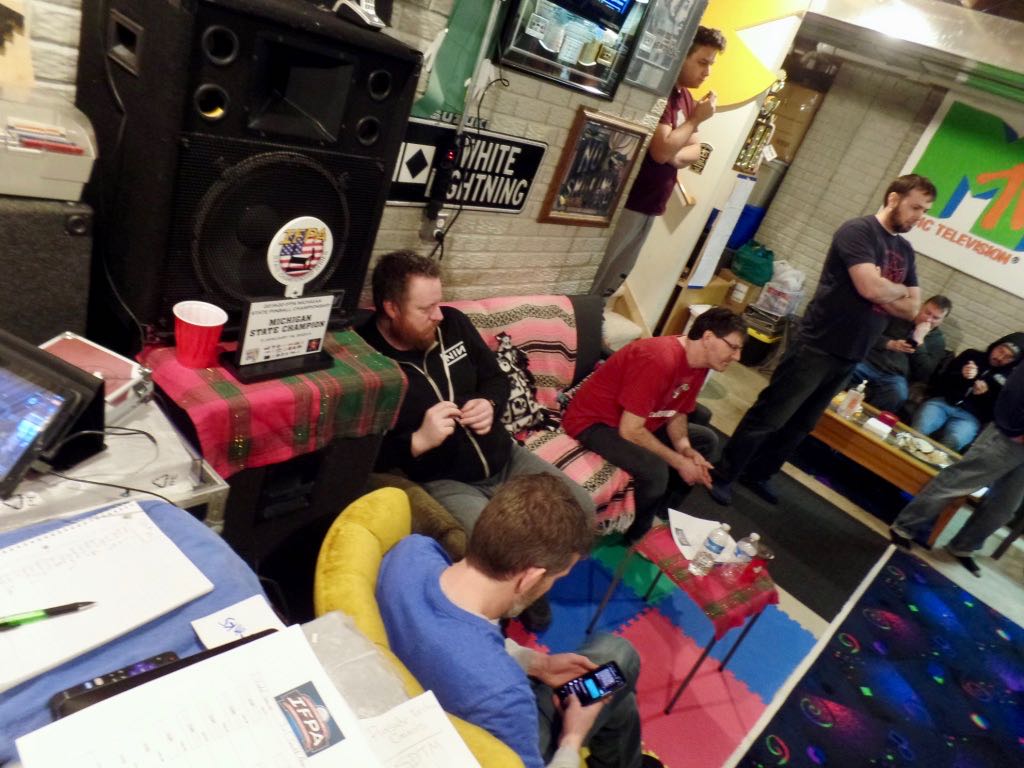 Competitors sitting around, snacking, and waiting for people to finish so they can start the next round.

And the big trophy, what everyone was hoping to come home with and only one person would. 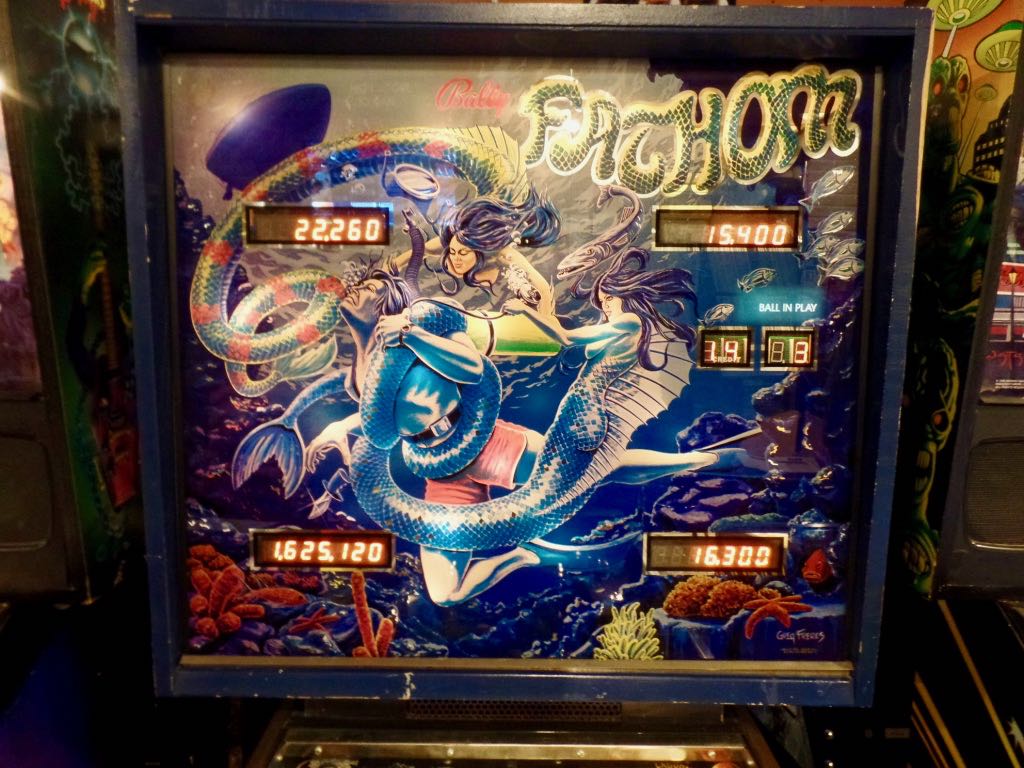 Fathom! The mermaid-peril-themed game just like I'd seen and played a little in the Silverball Museum. It would not help me. Also, I forget who was playing here. (I have the feeling MWS might have been player 1, but I have no reason to think that's true.) But players 2 and 4 were dummy, plunged but unplayed balls (a thing done so that if one player tilts hard, they can't cause a tilt on their competitor). So it was just player 1 and 3 competing and ... oh, wow. Everything about this is harsh. 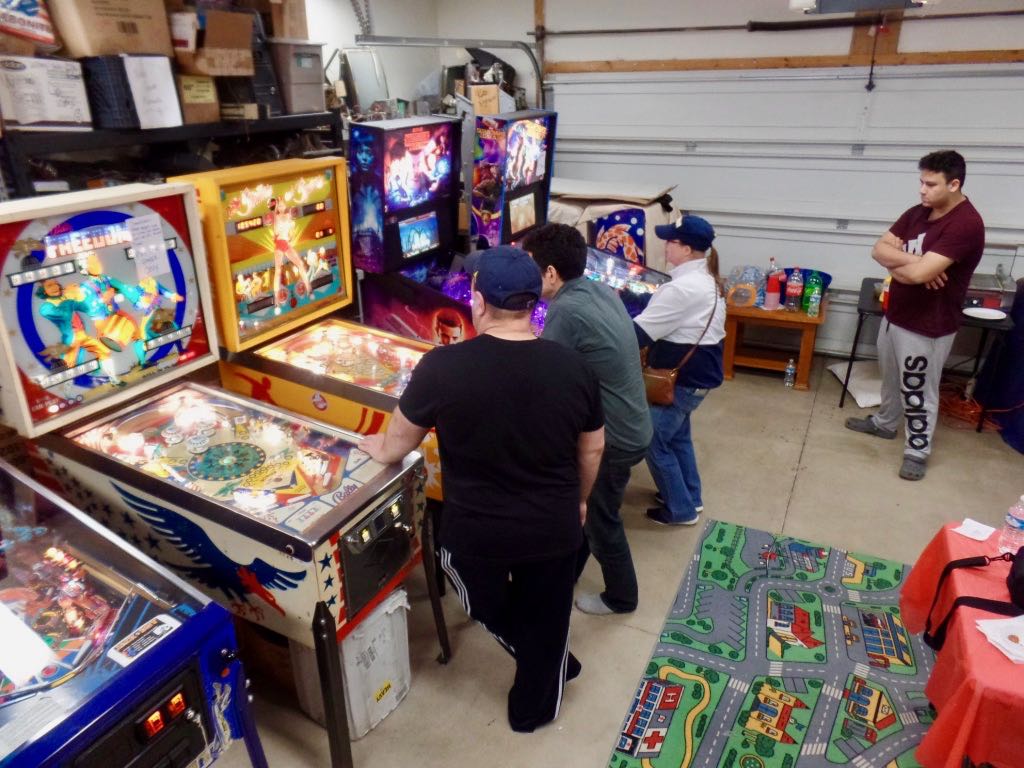 Folks playing upstairs. Oh, that Freedom table? I got to know it at Pinburgh and really really liked its styling. I had at least one crushingly good game on it in competition, too.

Trivia: Over the lifetime of the Space Shuttle program its software averaged under 1.0 errors per 5,000 lines of code. Source: Safely To Earth: The Men and Women Who Brought the Astronauts Home, Jack Clemons.

PS: When should I refill my tea? I put out an optimization problem and have a strong feeling I already know the answer. Haven't calculated yet, though.