Down the road of life we fly

Pinball At The Zoo, in Kalamazoo, has a tentative schedule date of Labor Day weekend, 2021. I hope it'll be safe to hold the event. I can't imagine that the International Flipper Pinball Association will be sanctioning events that early. They're at least for now trying to wait for everywhere to be safe to resume. But a tournament doesn't have to be sanctioned to be fun, or worth doing, and it would be so nice to have a thing going again.

I hope that we'll have been vaccinated by then.

The Grand Rapids Public Museum was not the only thing we did in February! One year ago today as this posts we visited the Mount Hope Cemetery, in Lansing --- in, as I see it now, a comfortable walking distance from home --- to get a series of letterboxing stamps planted near various grave markers and such. I don't have pictures of that, for fear of spoiling the locations of these hidden boxes and their occult stamps, but there's still beautiful scenes to see there. 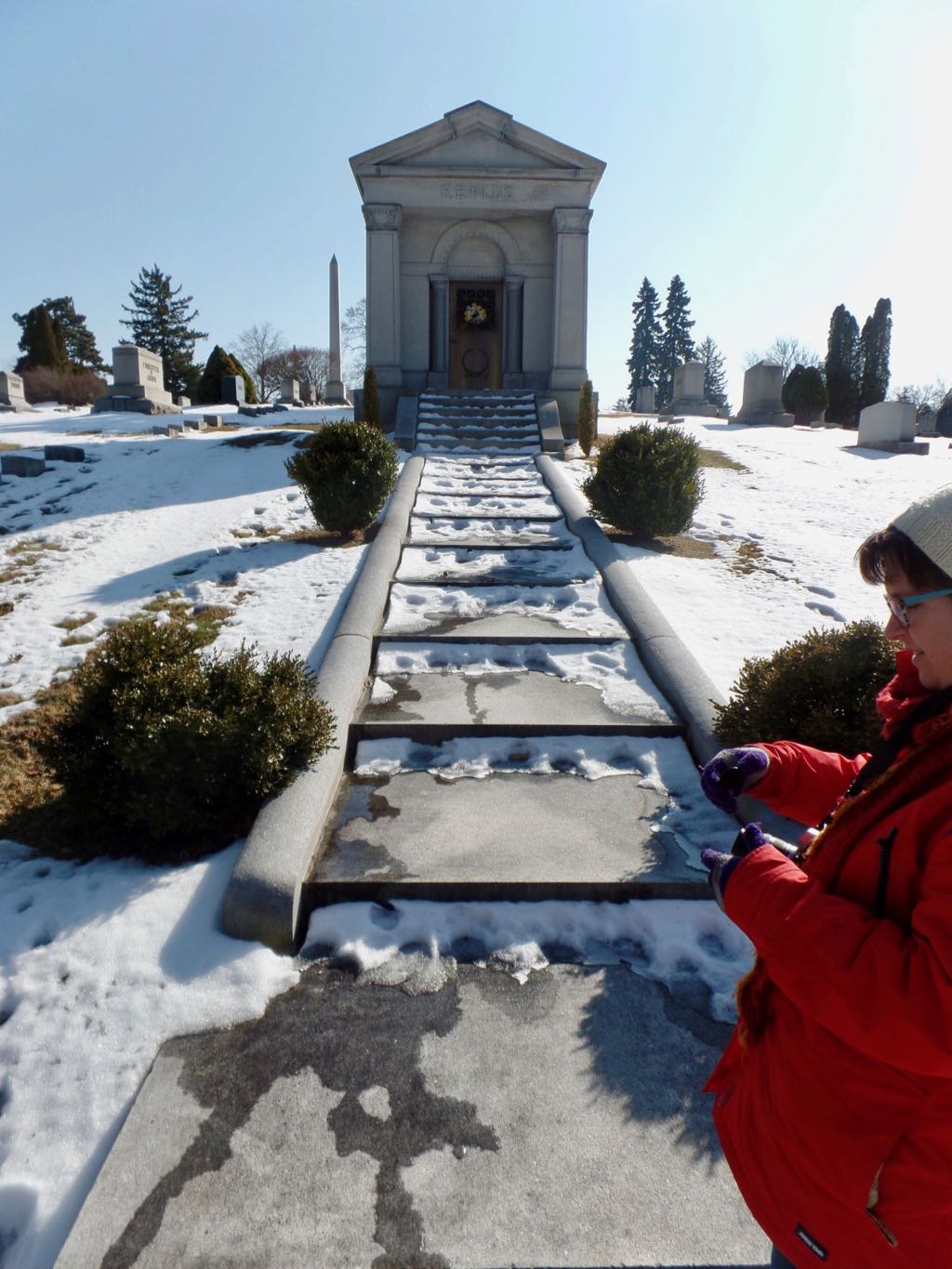 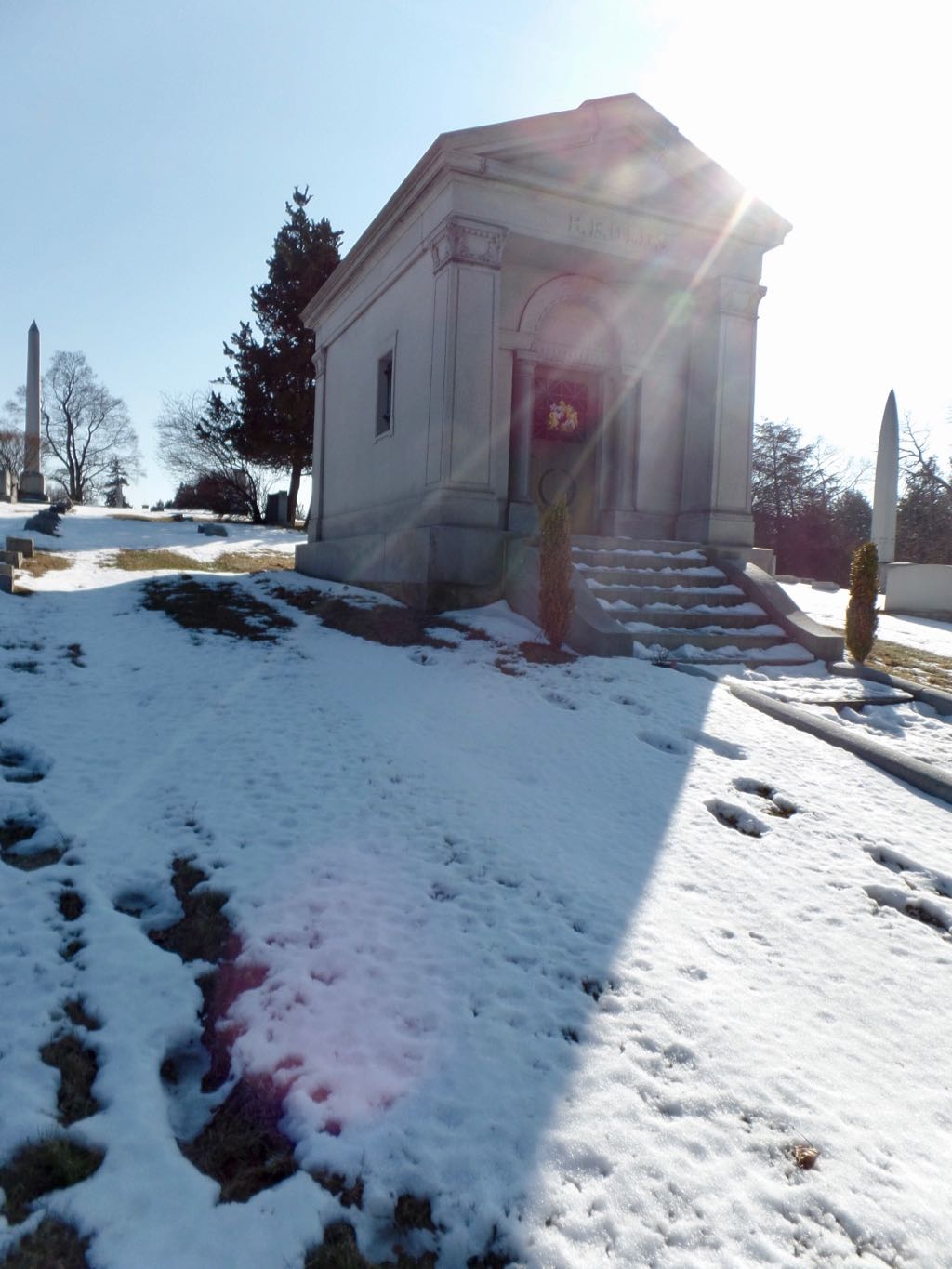 The Olds mausoleum as seen in the afternoon sunlight. 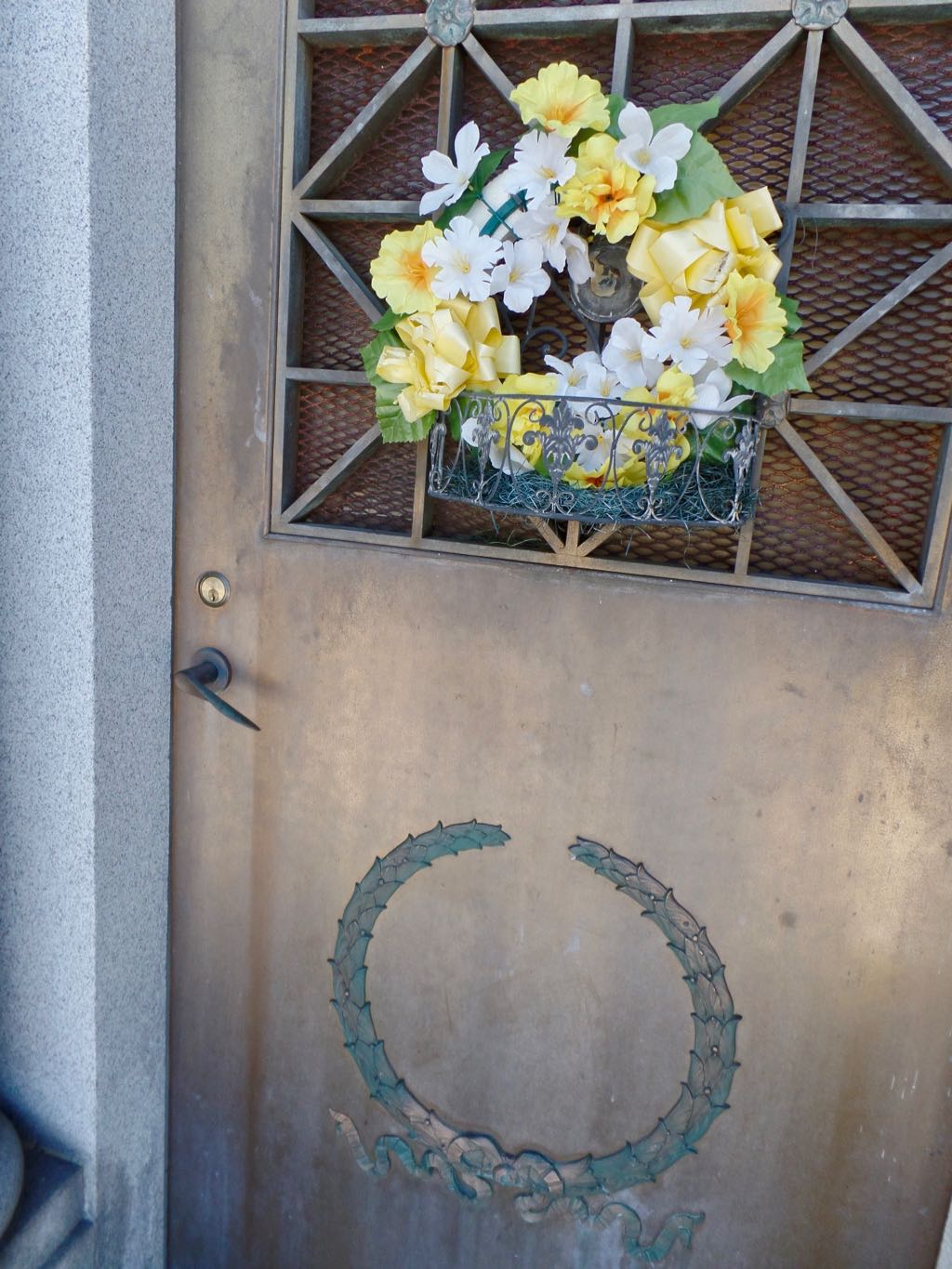 Flowers and the locked door to the Olds mausoleum. 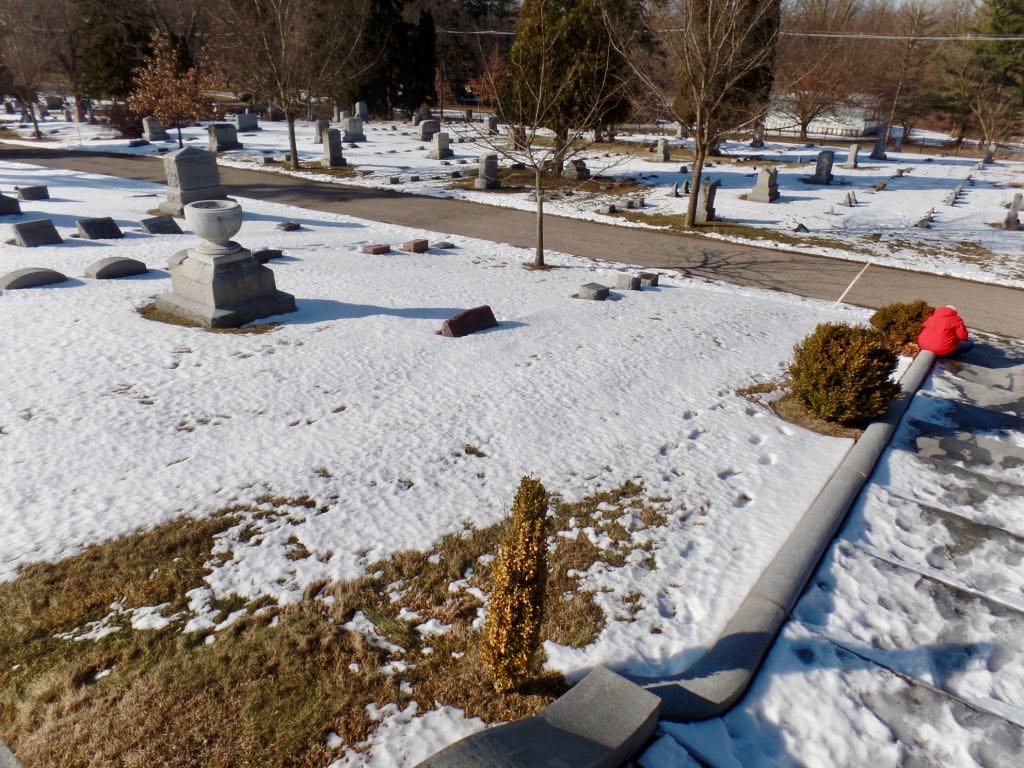 Looking back down the uncleared steps of the mausoleum.

bunny_hugger is getting her good camera set up to take serious pictures. You can see those over on flickr. 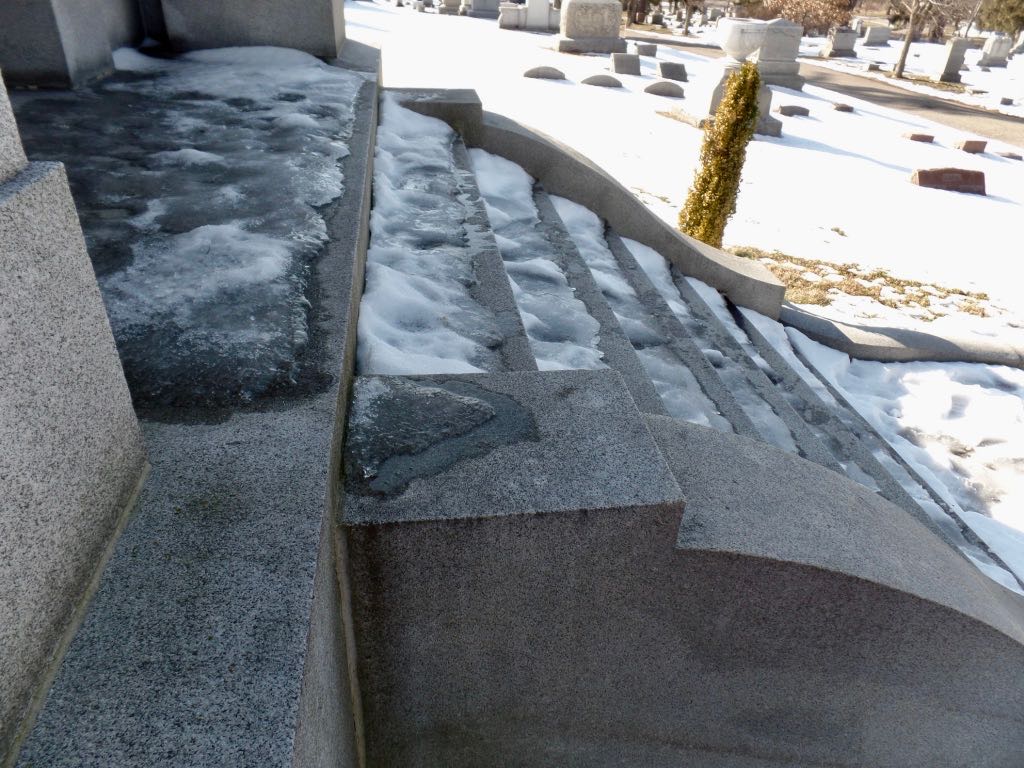 The steps were not cleared at all, and with the melting and refreezing I felt more comfortable jumping off the entrance rather than risking taking the steps down again. 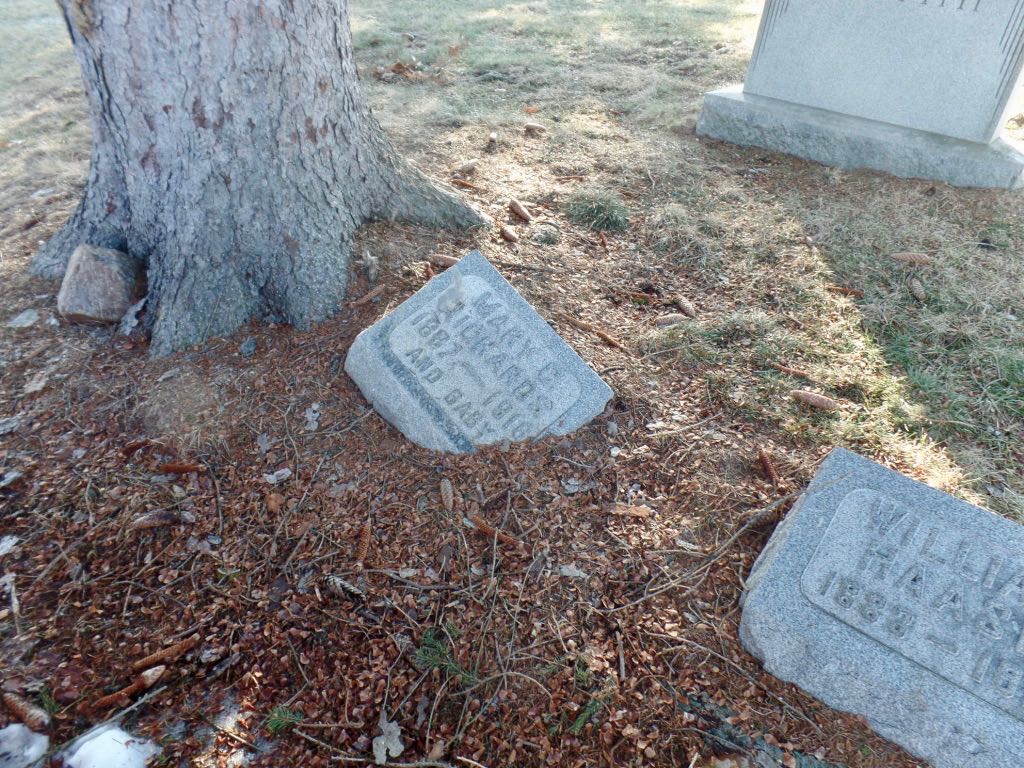 Poking around the Mount Hope Cemetery. The grave of Mary C Richards And Baby's been thrown off level apparently by the tree growing into it. 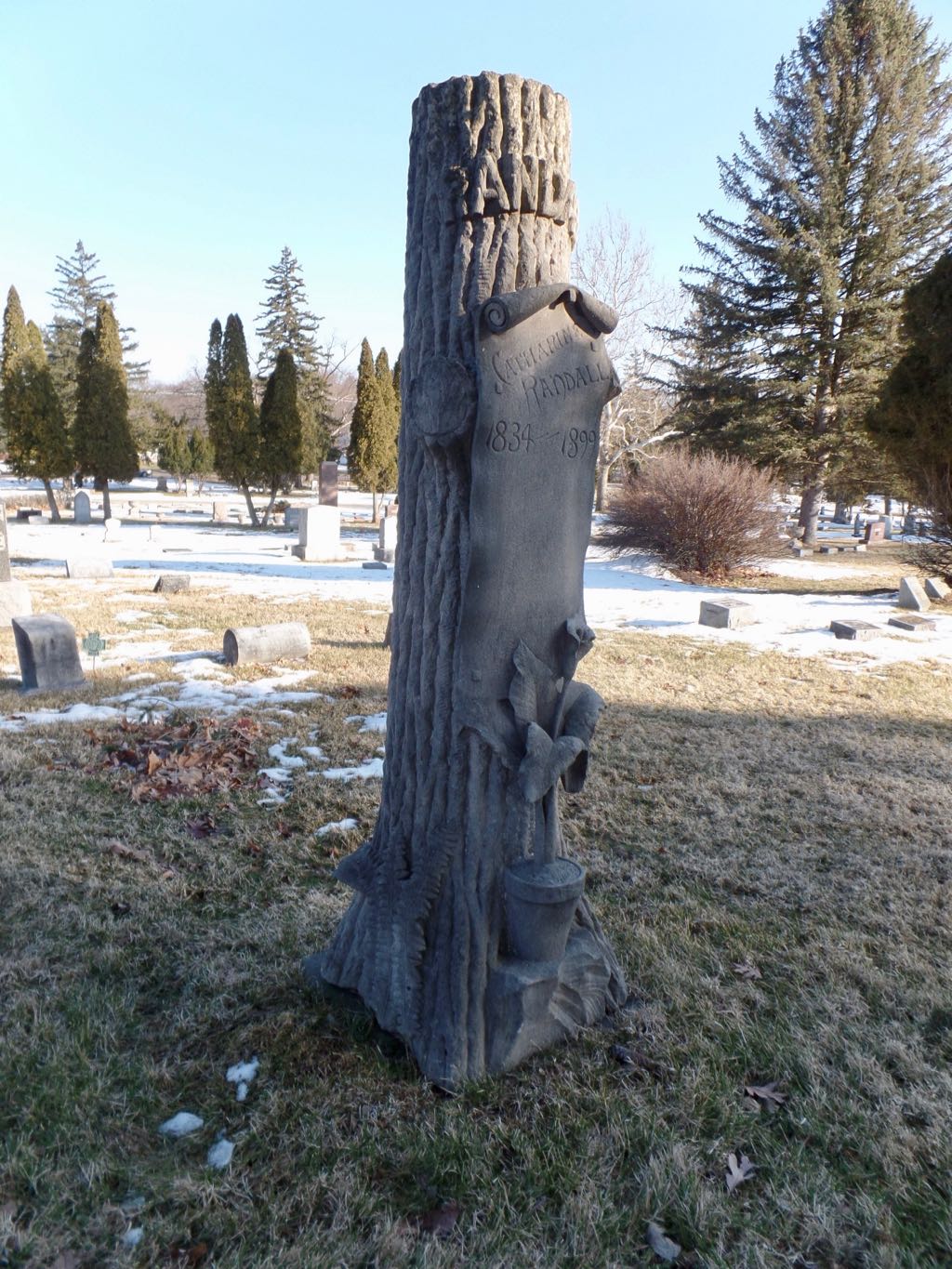 There were a bunch of elaborate grave markers available in the late 19th and early 20th century, such as this one that's tree-inspired. 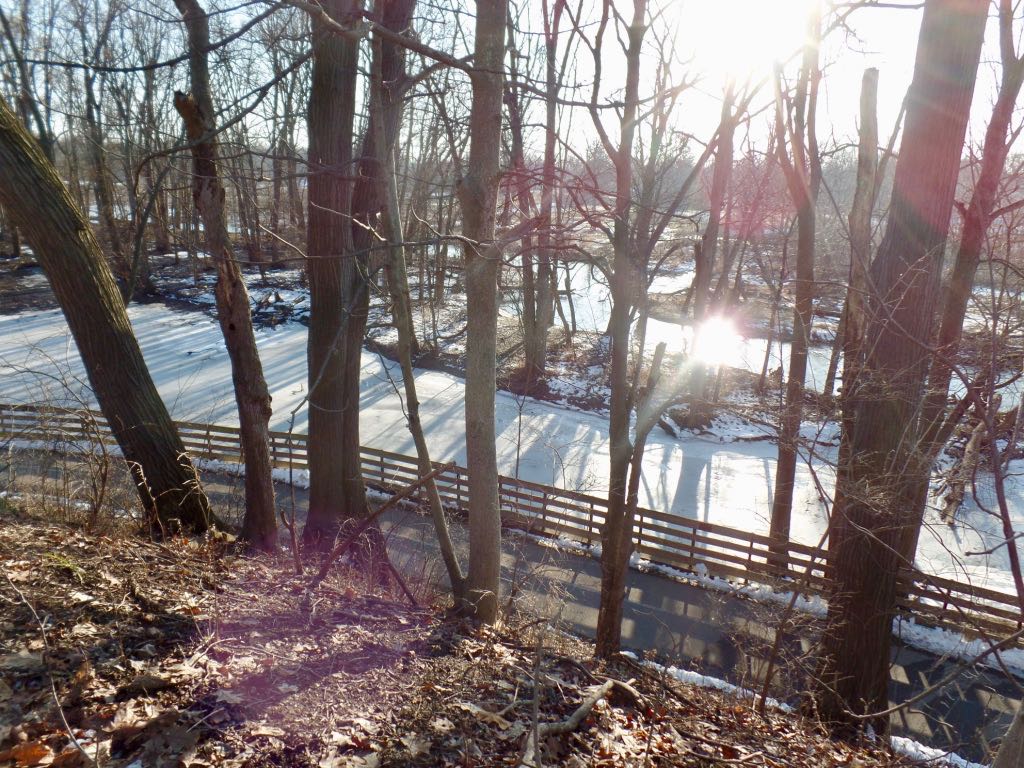 The graveyard overlooks, here, the Sycamore Creek which flows into the Red Cedar River.

Trivia: In the summer of 1864 President Abraham Lincoln sent New York Tribune editor Horace Greeley to Niagara Falls, Canada, to meet two representatives of the secessionist states to repsond to their peace feelers. Lincoln instructed Greeley to determine whether they were authorized to negotiate a peace that included the end of secession and the abandonment of slavery, ``whatever else it embraces'', and if both conditions obtained then Greeley should bring them directly to the White House. Source: The Paper: The Life and Death of the New York Herald Tribune, Richard Kluger. (They were not authorized so, or authorized for anything particular except to stir up anti-war sentiment by making Lincoln look duplicitous.)

Currently Reading: The Pope Who Quit: A True Medieval Tale of Mystery, Death, and Salvation, Jon M Sweeney. In the front material of this 2012-published book Sweeney writes about the fascination of Celestine V, the only man who have abdicated the papacy, so, I'm guessing Sweeney had mixed feelings about how 2013 turned out. (I assume Sweeney will have something to say about why the other popes who left the office don't count. I'll grant Gregory XII's abdication to end the Western Schism may be considered as a different kind of action.) In the introduction Sweeney does note Pope Benedict XVI pausing and setting some papal garb on the remains of Celestine V in 2009.