Trying to escape the cloud

So how about amusement park news?

Last time we visited Conneaut Lake Park the park had staggered out of another death event. It was still in bankruptcy but it was functioning, had the water park going, and had its best season in decades. Then the pandemic hit and the place couldn't open at all in 2020, the way no amusement parks should have. This past month, the park got sold.

The new owners are Keldon Holding LLC, which nobody knows all that much about. Shortly after the sale, apparently, people started seeing X marks spray-painted on the most dilapidated of buildings. This is exactly what you'd expect from an owner who figured to demolish the amusement park and build lakeside condos.

NewsPlusNotes notes that of the 13 parties interested in Conneaut Lake Park, and 10 that went through with bidding, Keldon Holdings was the only one with a bid okay with the public-use restrictions on the deed. So far as a deed restriction means anything, which is just how much the owner wants to try breaking it. Todd Joseph, at the center of the new buyers, became aware of Conneaut Lake Park as part of a project to turn it into a senior-living community. And (says NewsPlusNotes) then ``fell in love with the property and its potential''. And, marking for demolition the most dilapidated and least-salvageable buildings is what you'd do if you wanted to run the park as a park. Certain people will be enchanted by an amusement park that looks post-apocalyptic but functions. Many more people will look at that and insist the Tilt-a-Whirl is a deathtrap.

The plan then is to get Kiddieland and the water park open in May, pandemic permitting, with cleanup and repair being done as they can. So ... is, possibly, Conneaut Lake Park is not yet dead somehow?

Last we heard about Clementon Park was its death-rattle before the Pandemic. At Customer Appreciation Day for the 2019 season the park didn't open. Nor did it open the remaining few weeks of the 2019 season. It cancelled all season-ticket sales for 2020. And that's about all we could hear, with owner Premier Parks LLC evaporating. The park's being put up for auction, with an inspection day the 19th and final auction the 23rd. Which looks like the final end for one of the oldest parks in the United States.

But then ... NewsPlusNotes today reveals that someone called Fresh Development LLC is trying to put together $7 million to buy and invest in the park. They see a park that could reopen this year and get something like 170,000 visitors and as much as $7.5 million in revenue. There's six other parties known to be interested in the park, but this is the only one that's revealed an interest in running the park as a park. The Philadelphia Inquirer's article says this would be the first investment for Fresh Development, a group of Black investors organized in response to the murder of George Floyd by cops. Melvin Brown, head and organize of the group, worked at Clementon as a teen and thinks he's ``capable of bringing the right resources in and bringing out the best in this park''.

Happy words, at least, in a hard time.

Back to July 2020 photos. Here, some from when I was not just walking around. 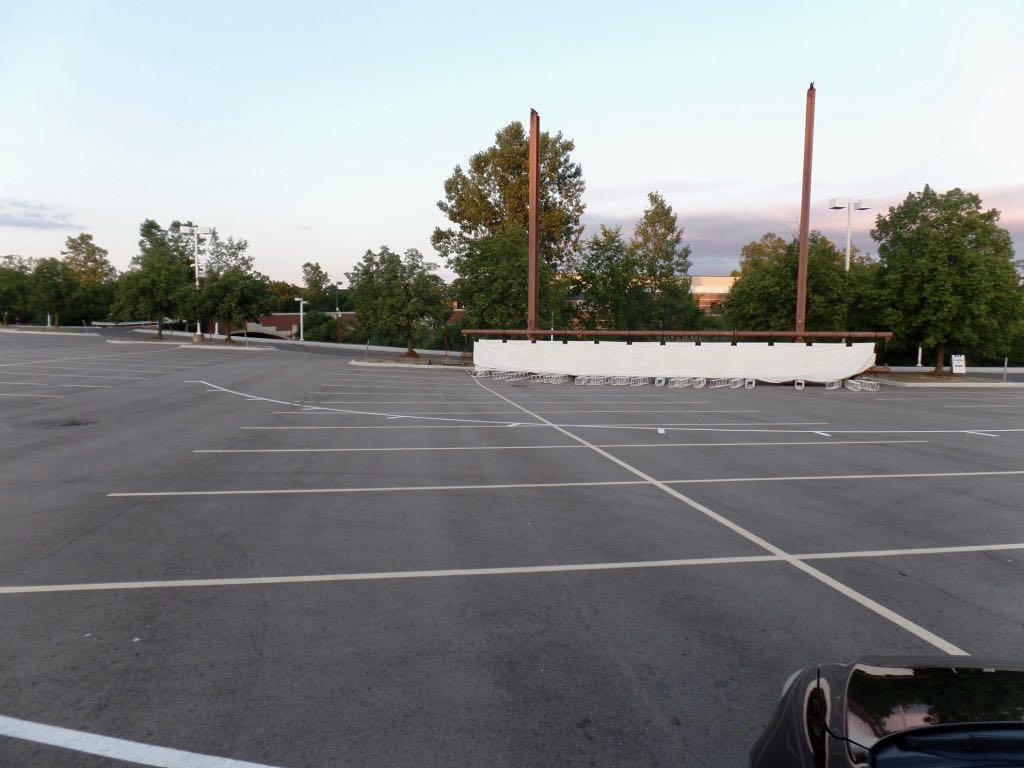 In late July we went to another drive-in, a showing of E.T.. This was in Plymouth, in a temporary drive-in facility set up every summer outside the USA Hockey Arena, which sounds like the name you'd make up to be snarky but is because the USA Hockey Foundation bought the place in 2015. Still. Anyway here's the screen way ahead of showtime. 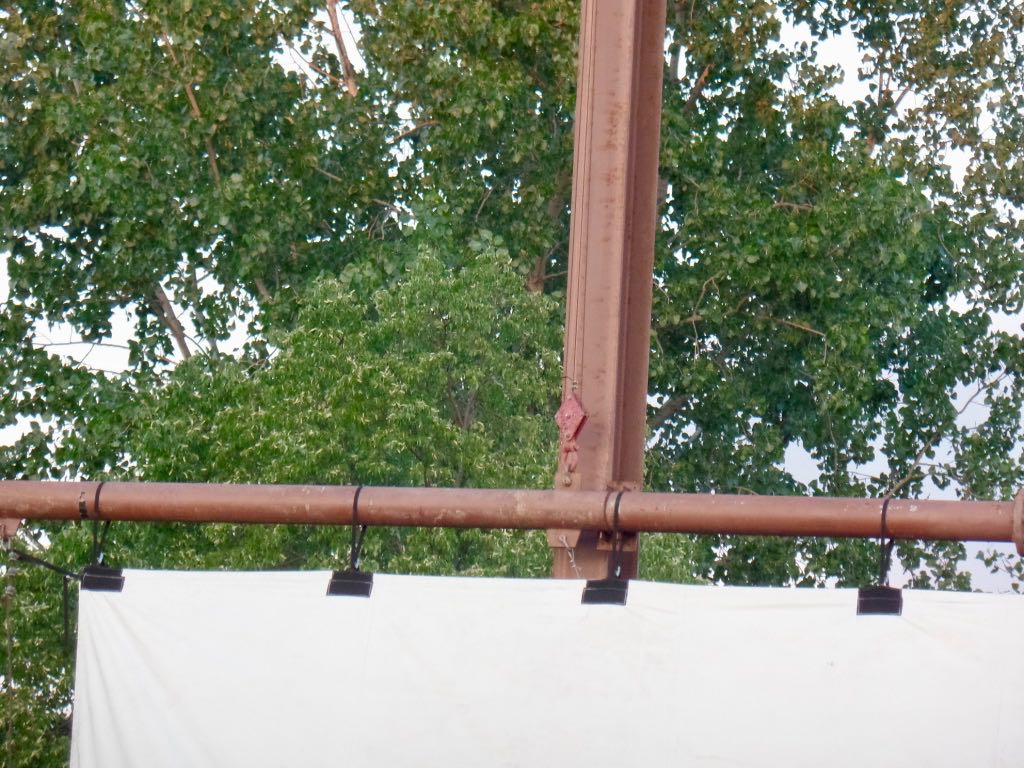 The screen being raised into place; you can see how exciting it is to see a still picture of barely-moving hardware. 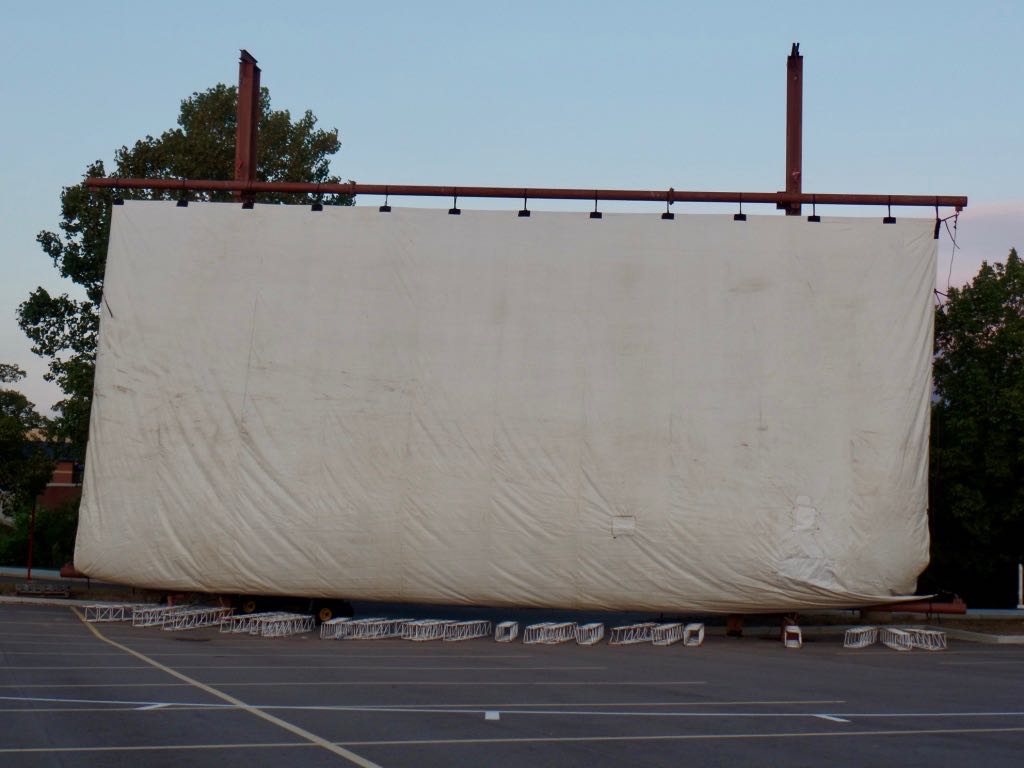 The screen almost raised full up; my recollection is it got stuck for a while. Note the patches, just like in a 1930s cartoon showing movie-theater curtains. 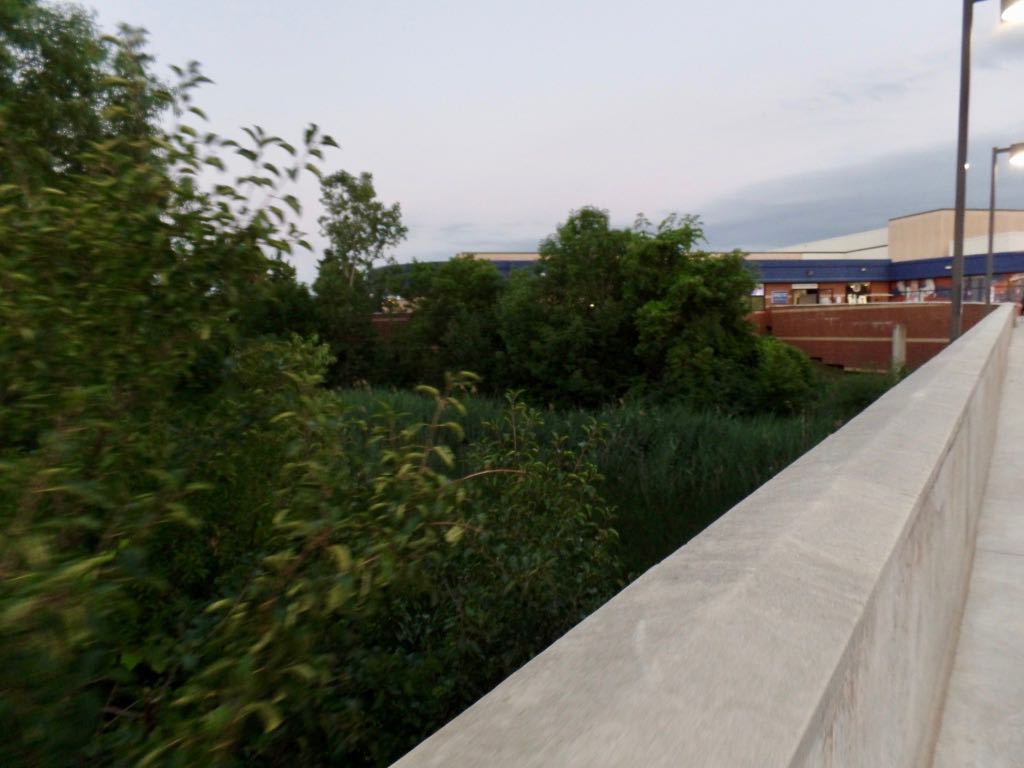 The greenbelt flanking the arena (which had the bathrooms, at the end of long hallways divided in half so there could be a one-way circuit of motion). 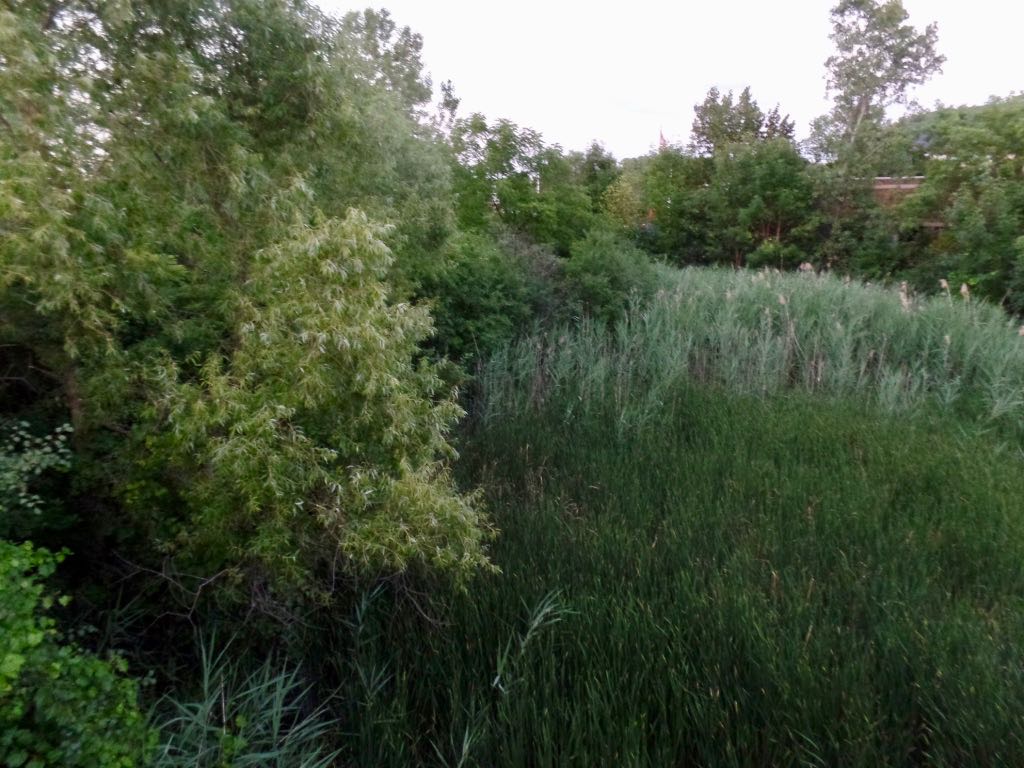 Woodsy areas in-between the parking lot and the arena. 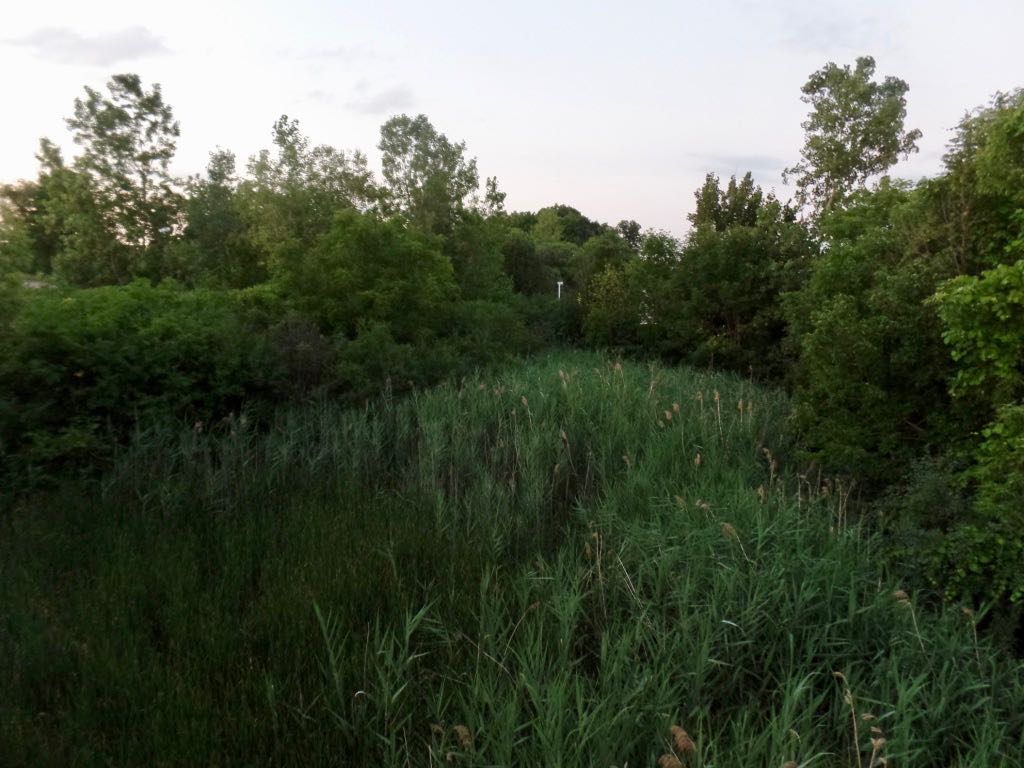 It's a great lush spot and we worried there might be mosquitoes. 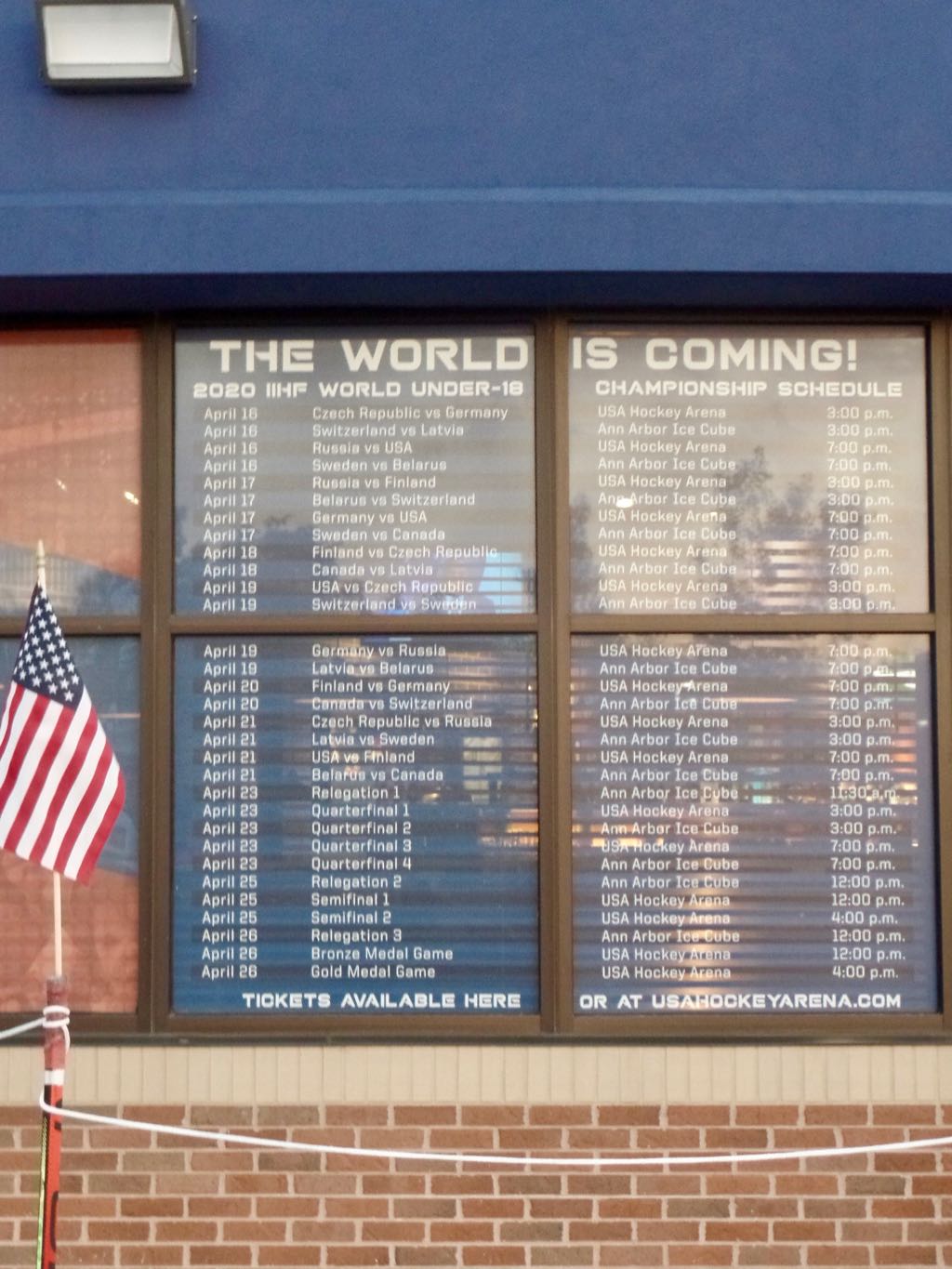 The World Is Coming! The 2020 International Hockey Federation Under-18 Championship Schedule, frozen in an aspirational amber. 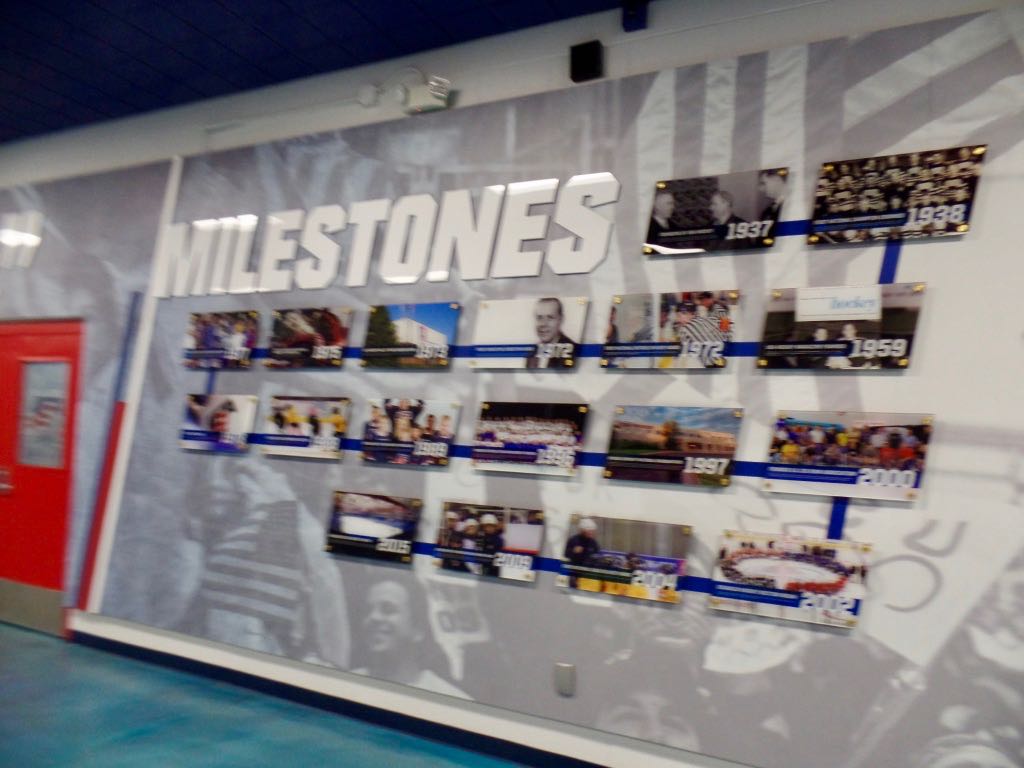 Wall of hockey federation milestones, along the way into the arena and down to the only open bathrooms.

Trivia: In 1914 the Singer Sewing Machine company had a workforce of 27,000 employees in Russia, including sales representatives who travelled to outermost Siberia. Source: The Company: A Short History of a Revolutionary Idea, John Micklethwait, Adrian Wooldridge.

Currently Reading: Lunar Outfitters: Making the Apollo Space Suit, Bill Ayrey. So at one point in 1968 to keep crew assignments confidential (even from the astronauts!) while letting the spacesuit-makers know who they were fitting, NASA and International Latex Corporation worked up a list of code-names for the astronauts, matching each name to a star, and would communicate in memos that used the star names instead. You forget that even at its peak, the space program was also run by seven-year-old boys.