And you may say go way

Back to our pet mouse. There's no particular worse news going on, but I'll still keep that behind a cut for people who don't need pet-health issues in their life just now.

He's happy enough taking the antibiotic, I assume becase we're able to give it infused into a bit of bread. So he can eat it the way he'd eat any treat. The steroid cream, though? That has to be put onto his back. And that means we have to hold him. Particularly, I hold him, because I'm content to be the bad guy for any pet-handling issues. I don't know whether our mouse can tell the difference between me and

bunny_hugger. But if he can, then, he can know that she's innocent.

But he still did not like at all being picked up. The first couple times of this twice-a-day regimen I was able to catch him by complete surprise. But then he took to hiding. If he were out in the open I could chase him into a paper-towel-tube and grab him. But he caught on to that fast enough and resorted to hiding inside his egg-carton home and not coming out. We finally had to resort to picking up the egg carton and grabbing him in his confusion.

Not helping matters is that he clearly felt pained by the cream. It should be relieving pain and making it easy for his fur to grow back. But all we could see is him grooming hard to wash this off his back, and particularly his fur. And scratching and licking and trying to get this offensive substance out of his life. When, Saturday, I grabbed at him and he squeaked --- the mouse signal of ``please stop, you're hurting me'' --- we were traumatized too.

So, with the vet's approval, we called off the steroid. He's still getting the antibiotic, the more important thing if he's to recover enough to have his sarcoma operated on. But he's stil miserable about being chased and getting cream dabbed on his bare back. He ensconced himself in his small plastic bin --- the Eating Hut, we call it, because he would often run a treat into there to eat it --- and stuffed the entrance with litter and shredded paper and anything else he could get. This means that when he does come out, such as to drink water, there's this funny scene of the plastic hut (it's shaped like a barn) disgorging litter, followed eventually by a mouse. And the scene in reverse as he huddles his way back in. It's hilarious right up until you feel guilty that he feels the need to do that.

We also gave him his last dose of Revolution today. At least the last one we have a needle for. This and a complete change-out of his litter. This required, yes, harassing him by picking him up, but there's nothing to be done for that. We are yet again not sure

And now a bunch of miscellaneous iPod photos from September 2020, mostly just stuff noticed while walking around. 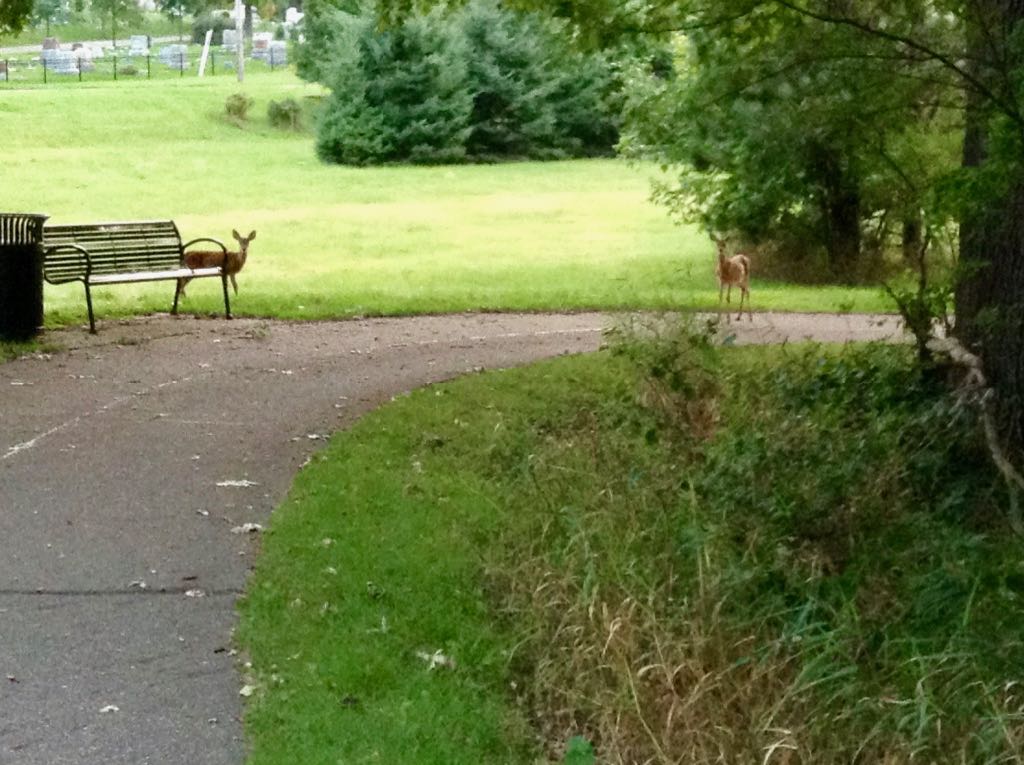 Thought I'd walk down toward the Mount Hope Cemetery one day and what do I find on the path but deer! 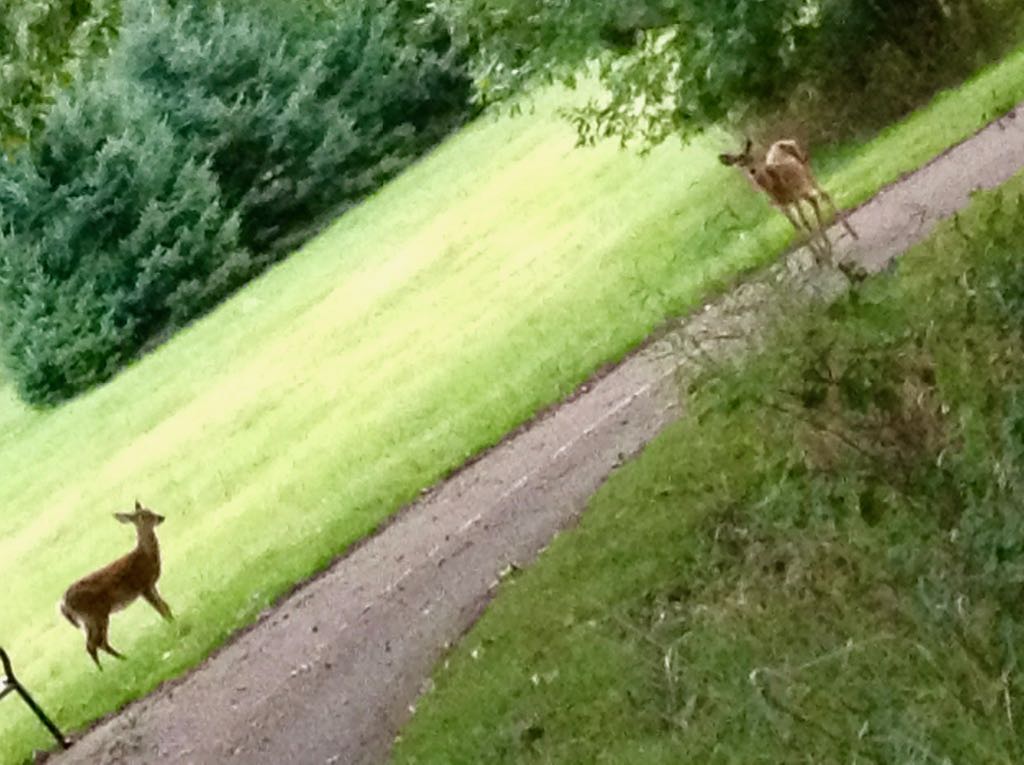 Dutch angle of the deer to make it more obvious how much they wanted me to explain what my problem was. 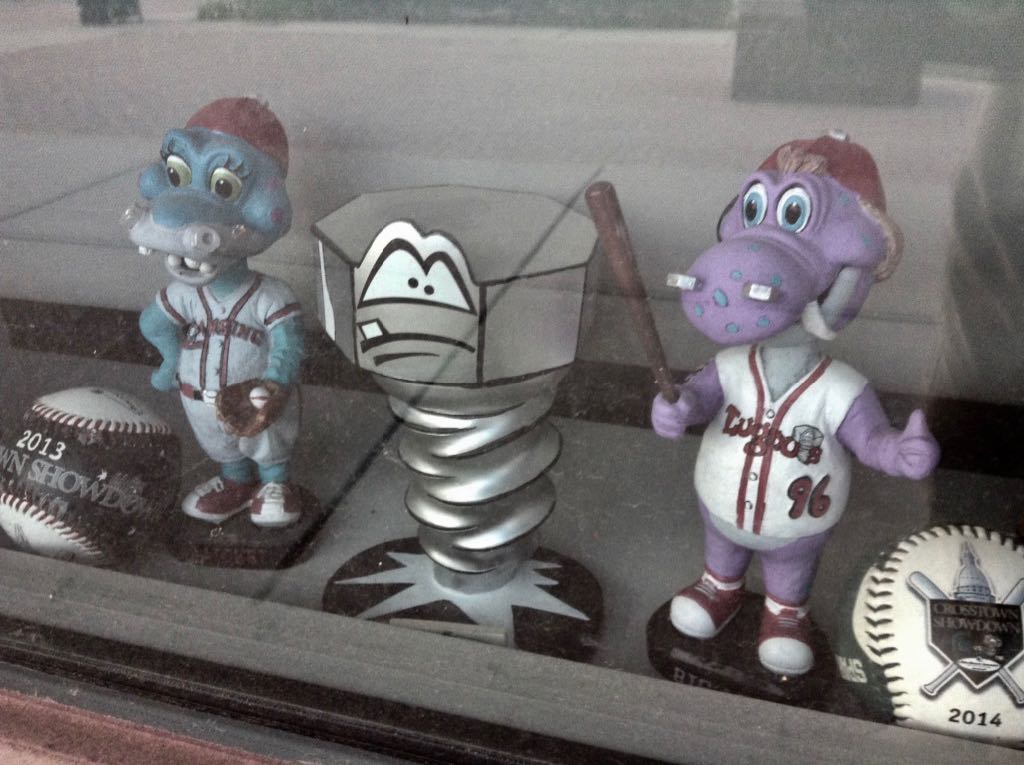 Walking to the Lansing Lugnuts stadium and here in the window I found dolls of Big Lug, the purple dinosaur-ish creature on the right, and the Lugnut in the center, and ... on the left ... say, now, what strange character is that supposed to be? 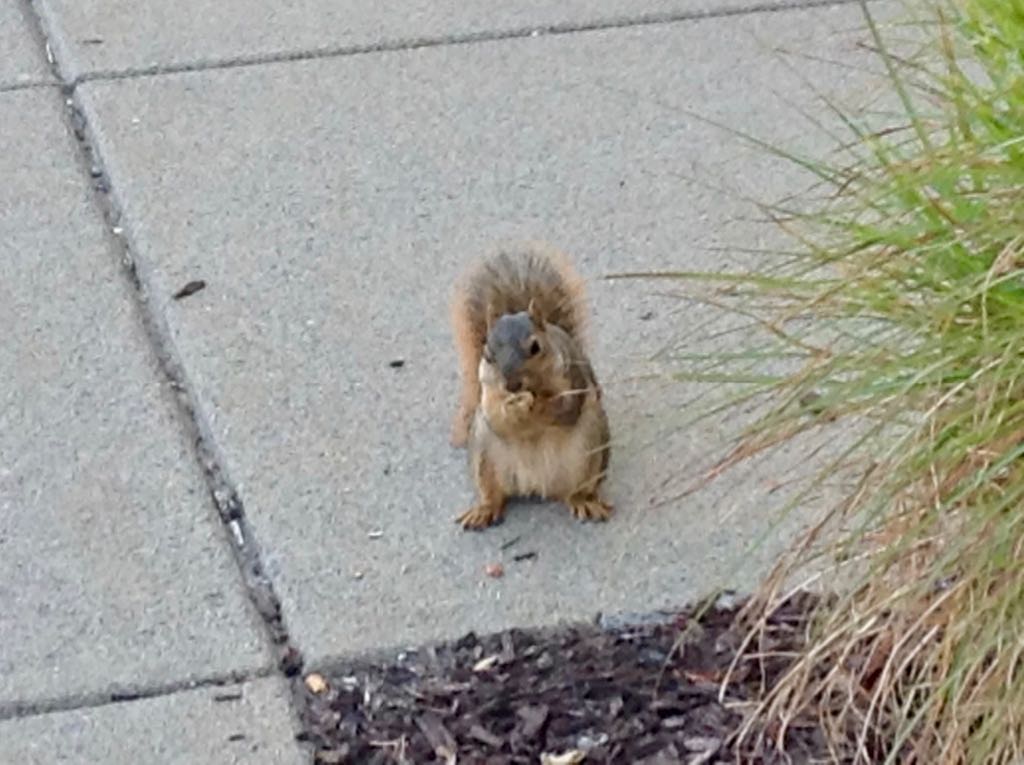 One day walking to Frandor I encountered this squirrel, on the strip mall sidewalk, eating a nut and not having any of my whatever-it-was. 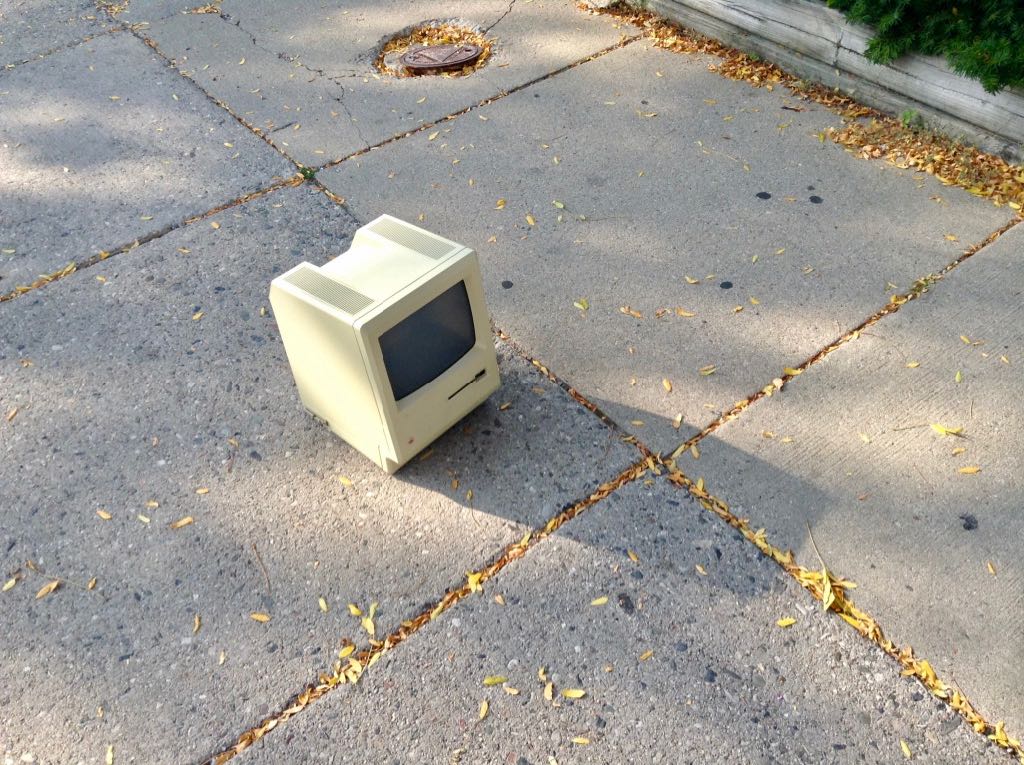 bunny_hugger regret interacting with them. 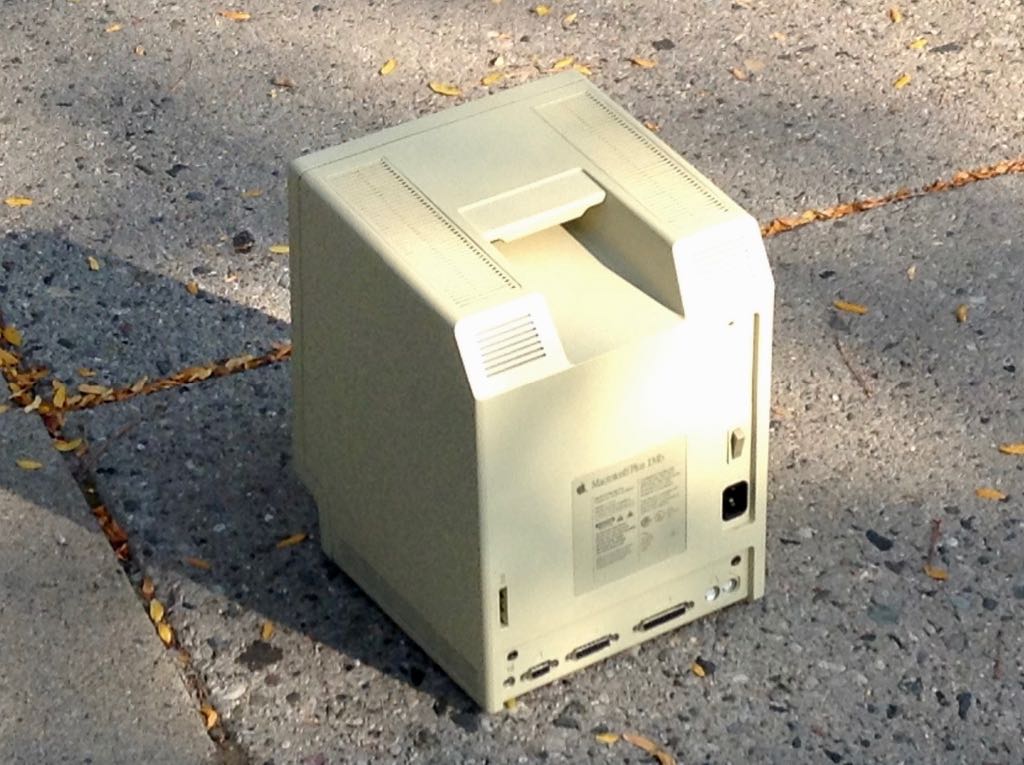 I don't know why a Macintosh Plus would go wandering away from the Mac repair shop but I hope it had a good adventure out on its own like that. 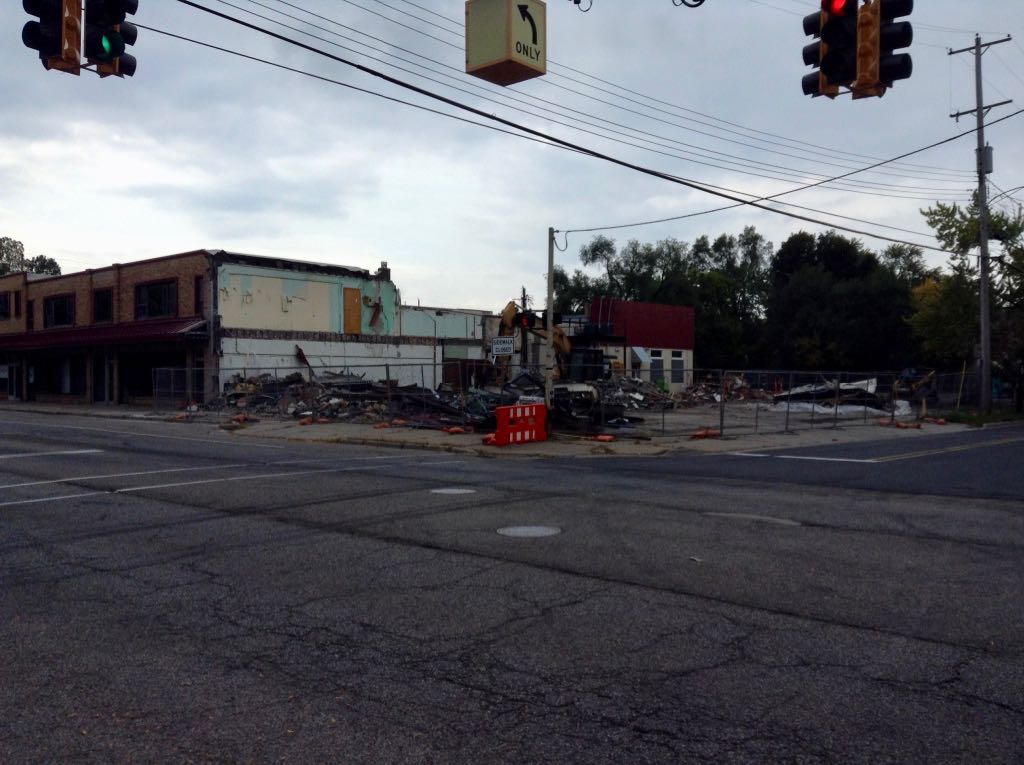 By September they finally got around to demolitions at the Allen Street neighborhood center. 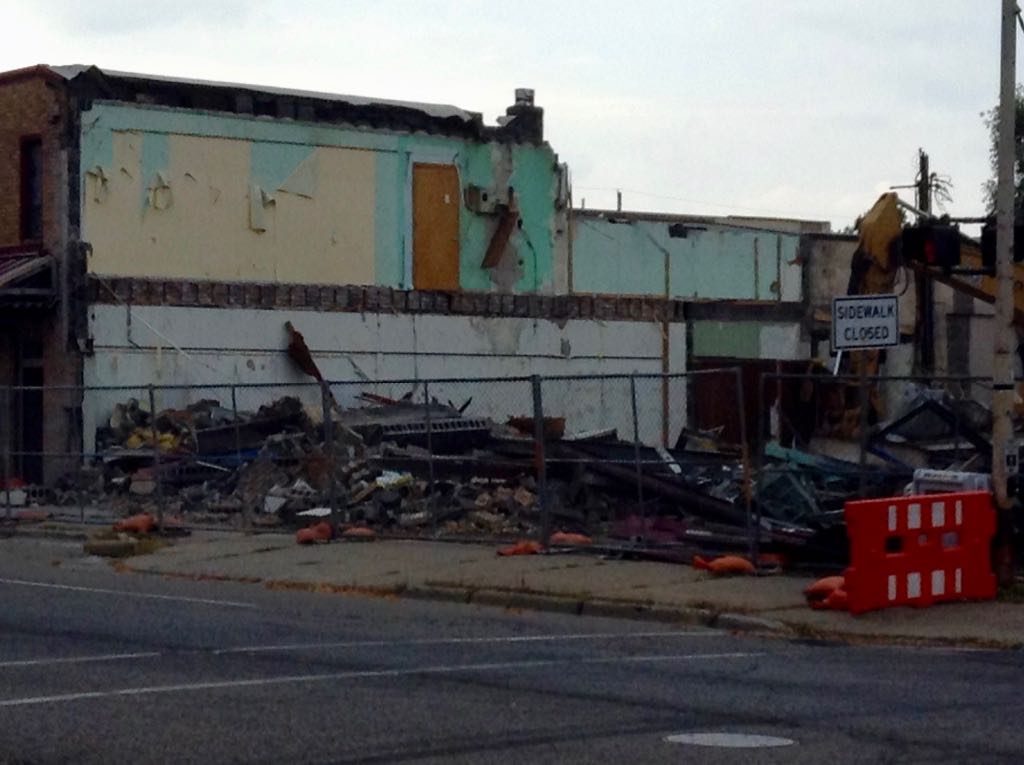 You can see parts of the interior now. The side of the building that had that corner-cut entrance is gone and has since been turned into a parking lot. The rest of the building's been let to stand as it is, at least so far.

Trivia: The 1858 plan estimated that three million tons of goods would pass through the Suez Canal annually after construction. At ten francs per ton this would bring in 30 million francs. Source: Parting the Desert: The Creation of the Suez Canal, Zachary Karabell.