So we brought our pet mouse back to the vet for a follow-up check on his troubles.

When we took him out of his cage --- I told him I hoped for the last time;

bunny_hugger said she hoped not, that there would be another trip for his surgery --- we realized his back was worse than it looked. The sores were bigger, and weeping. This is hard to explain as mites, especially for all the Revolution we've given him. I guessed perhaps his cancer might be keeping him from healing.

bunny_hugger had much the same thought.

At the vet's, we parked and texted to say what spot we were in, and ... waited. A lot. Like, a half-hour, before we had to drive off to go to the gas station bathroom. (We didn't feel comfortable asking to use the bathroom in the clinic. They're trying to keep people out of the newly-renovated-and-expanded clinic while the pandemic is still on. I suspect a bathroom break would be counted as legitimate, though given it took a half-hour for them to acknowledge our presence, we maybe didn't have time to get permission.) Then they called, and we hurried back and gave Fezziwig to the vet.

It was almost no time when they called back. His sarcoma has not shrunk, as would be needed to consider surgery. It seems to have metastasized into his back, keeping that from healing. The best to be done is to give him painkillers and try to make his life as comfortable as can be, for as long as he stays vibrant.

For right now? He's vibrant. He's still active, he's hungry, he's thirsty, he's playful. If not for the sore of his back, you wouldn't know he had any problems, since his sarcoma is on his belly and he doesn't wish to roll on his back. So that's at least consoling.

Taking away the consolation is that mice live fast, young lives. They get cancers, and those develop fast. Consider that we only started to suspect something was awry when

bunny_hugger noticed Fezziwig scratching his back a bit much in mid-February. A week after that he got his exam, and didn't show any signs of a sarcoma. It was not quite three weeks until we brought him back because his back wasn't healing, and he had a sarcoma the size of a thumbnail on his belly. And now, a week later ... it's terminal.

House mice can be expected to live about two years. Our mouse is about 22 months old. We don't know that he can make it two months.

On to happy stuff. More photographs of our Potter Park Zoo visit, back in September 2020. 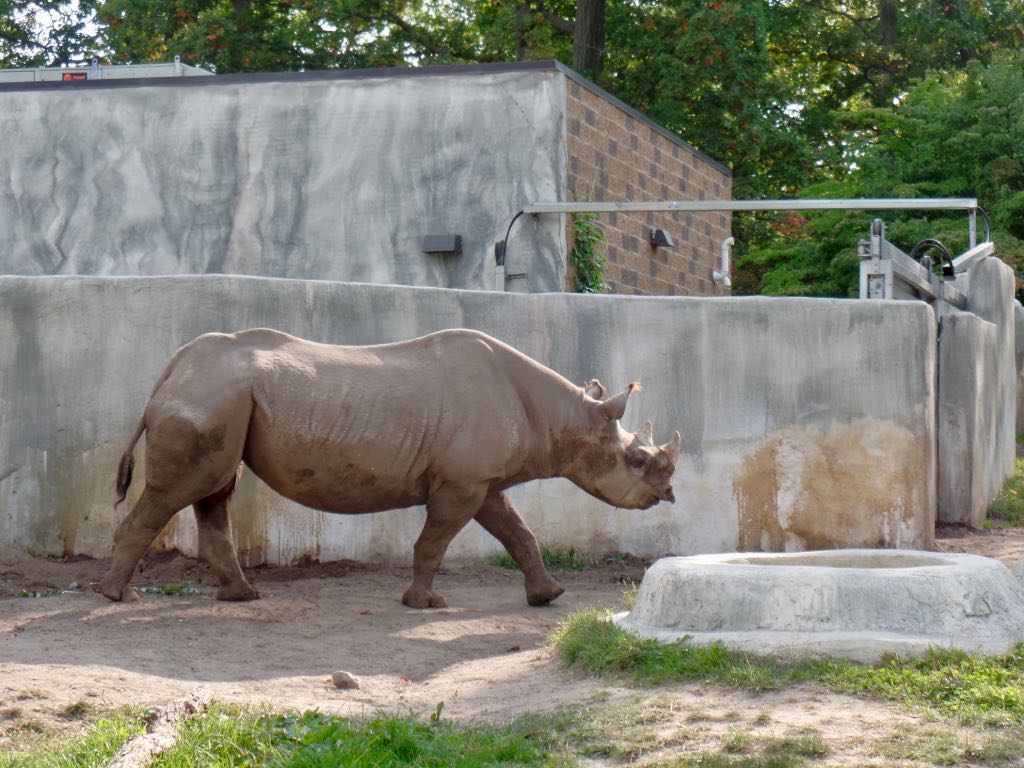 Phineus, the zoo's black rhinoceros, who came to Lansing in 2017 from the Caldwell Zoo in Texas. 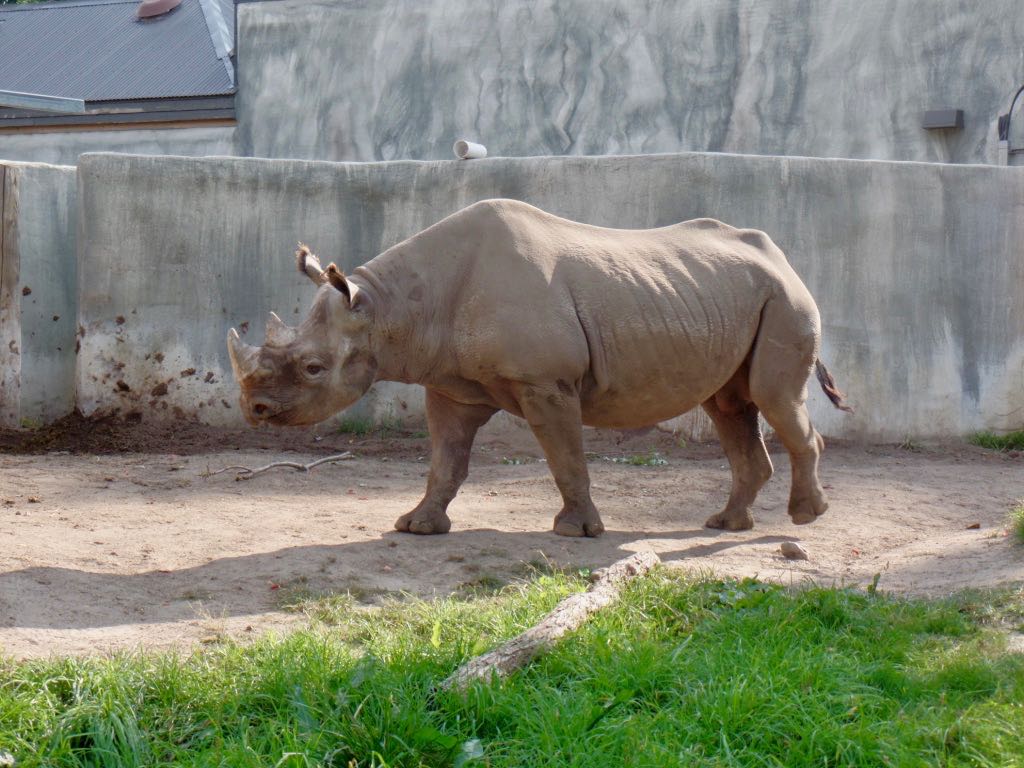 Phineus prowling around while we wondered where the zoo's baby rhino is? There was one born Christmas Eve 2019 and who would have first gone on exhibit in March 2020 had everything suddenly gone off exhibit. 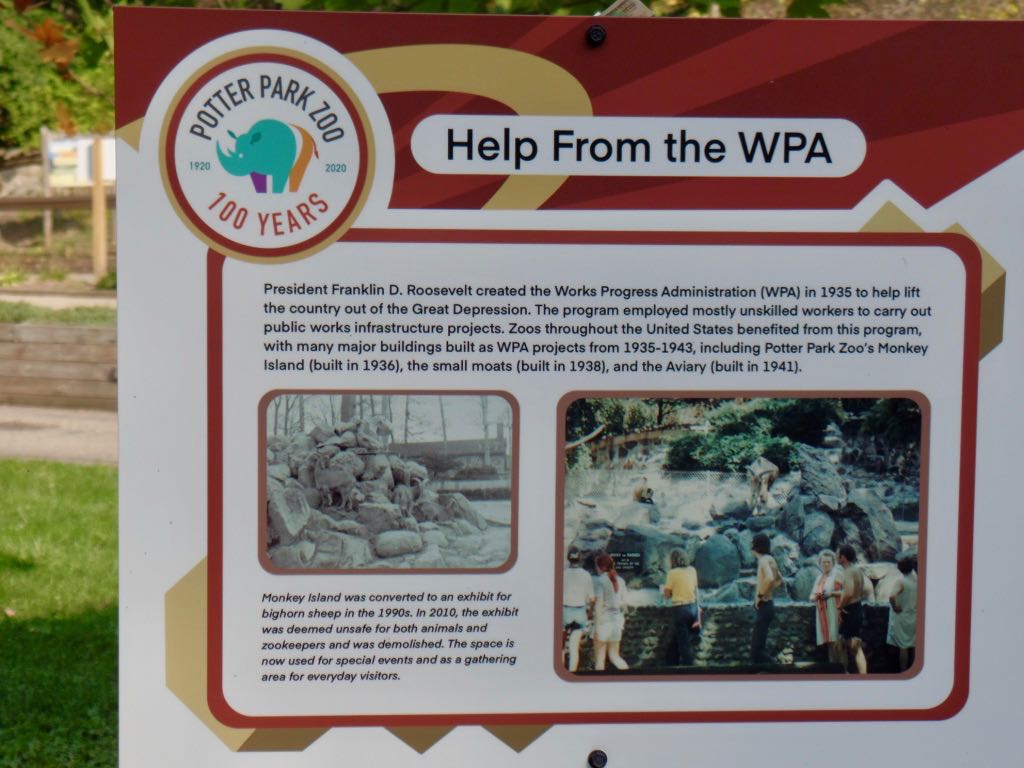 Another historical plaque, this about what the Works Progress Administration did for the park, which was generally to make it much better. Monkey Island, as seen in the photograph, is a decade gone now. I did read in a history of the zoo that next to Monkey Island was a mound on which they housed guinea pigs, a reminder that animals don't have to be big and all that exotic to rate as worthy attractions to the zoo and also that apparently in the 1920s you could just put anything you had hanging around in the Potter Park Zoo. 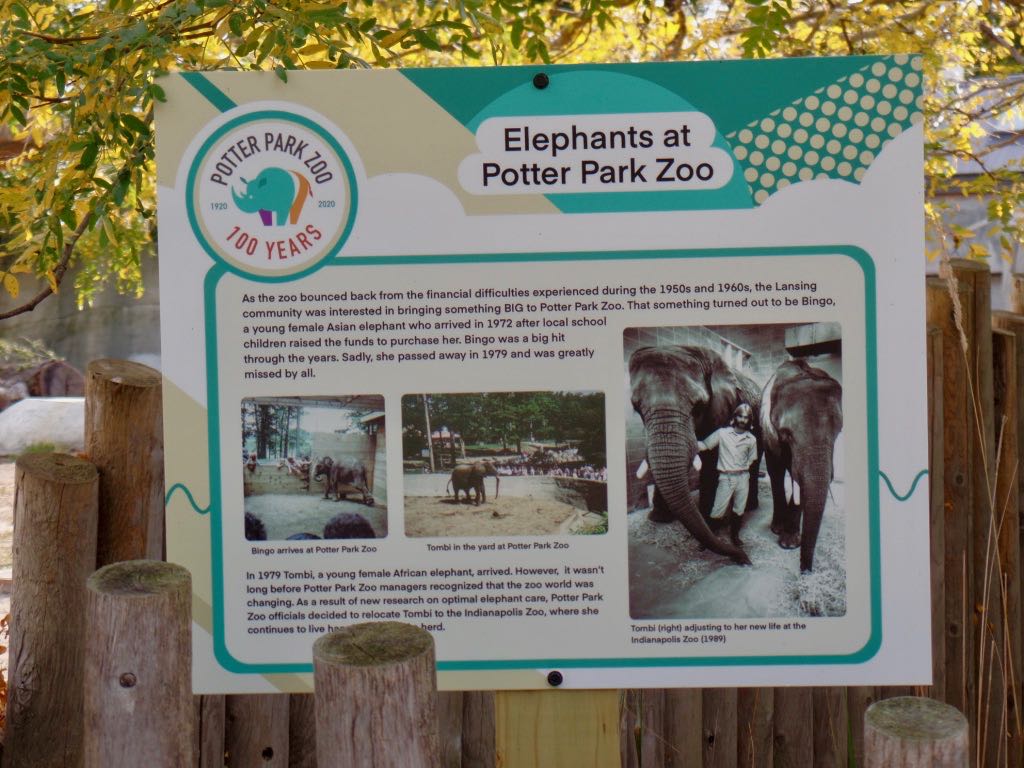 Like many zoos, Potter Park used to have elephants. And also like many zoos, they finally realized zoos are really bad places to keep elephants. The zoo's last elephant, Tombi, went to Indianapolis where they are hopefully doing a less-bad version of caring for her than Lansing could. 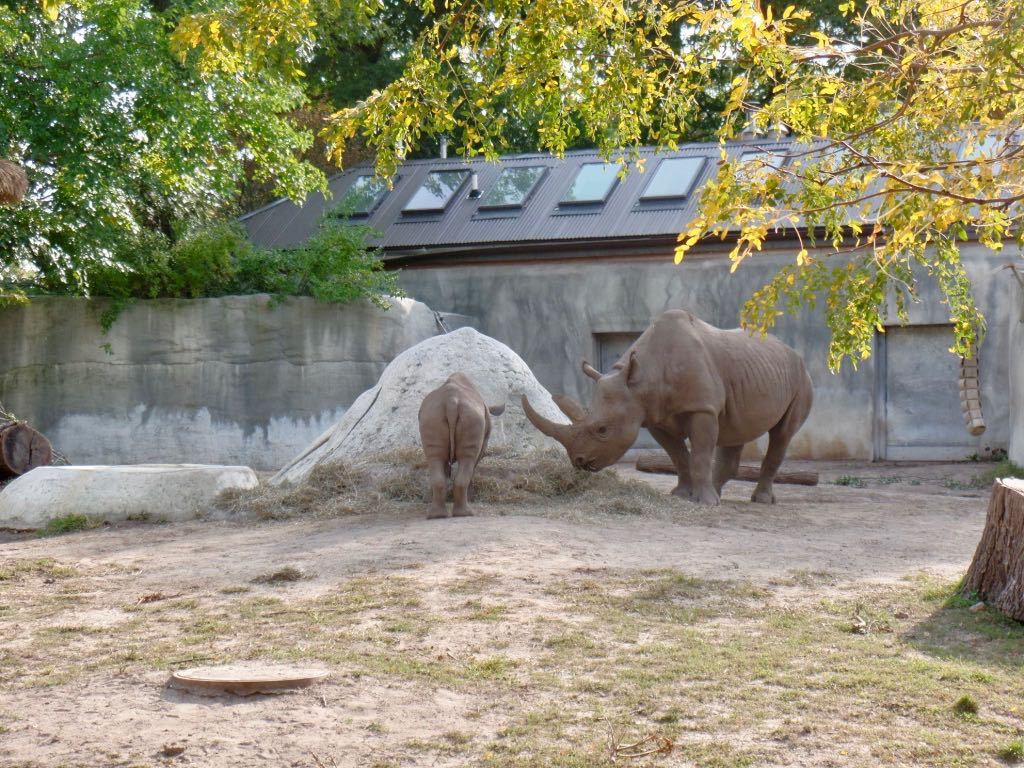 And here's the other black rhinoceroses! The mother, Doppsee, comes from the Sedgwick County Zoo in Kansas. The calf, who didn't have any interest in looking at my camera, is named Jaali, 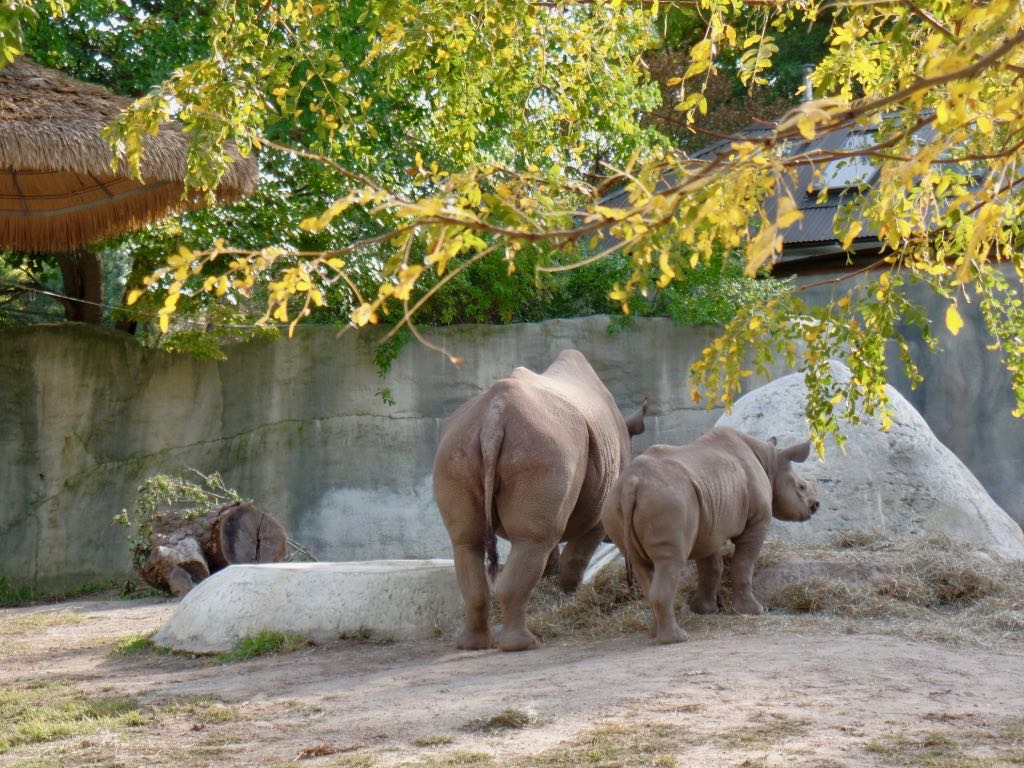 Jaali means ``powerful'' in Swahili, says the Zoo. It's hard not to notice that a major road not far from the park is Jolly, which gets pronounced the same so far as my ear can tell. 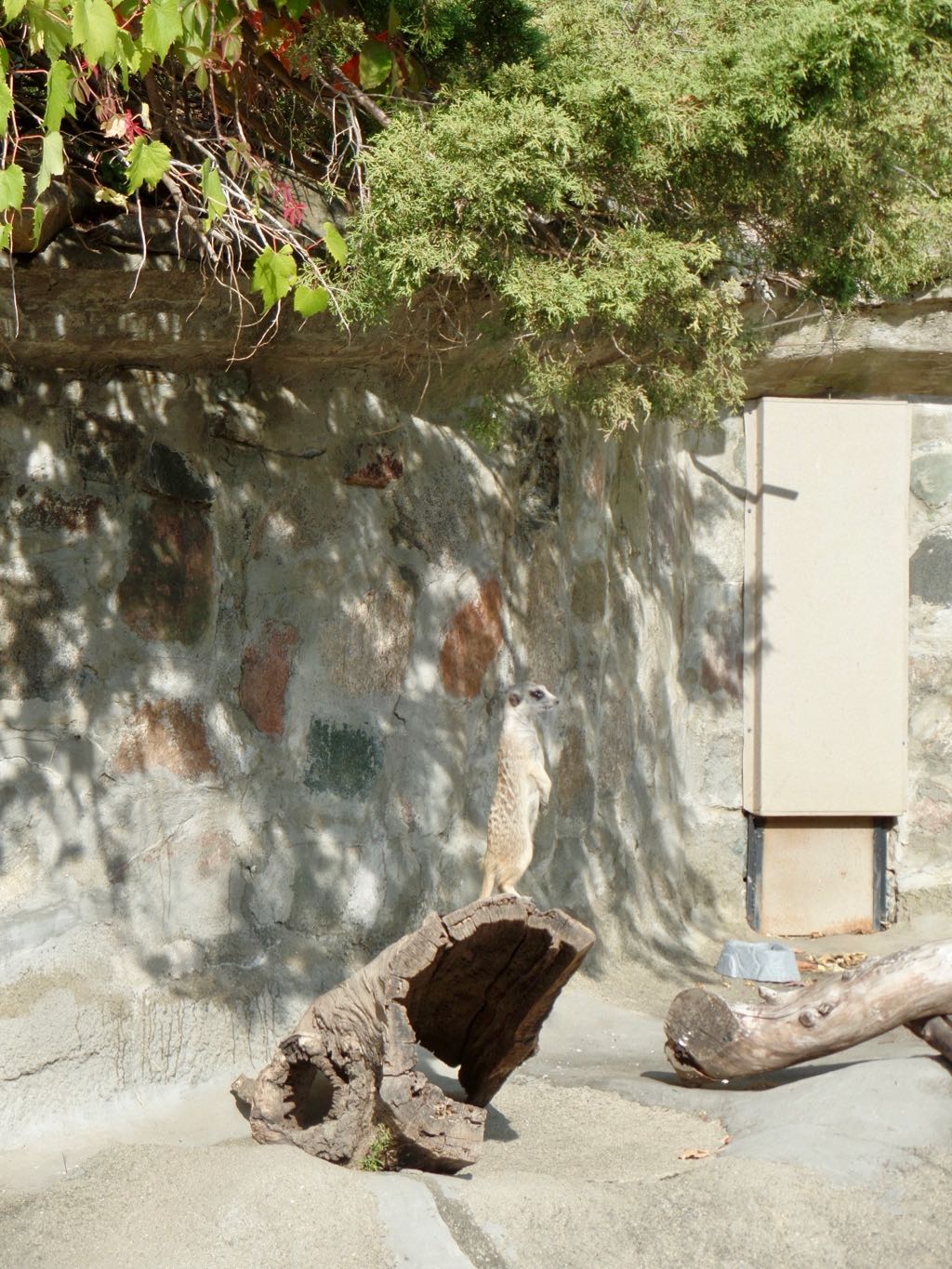 Meerkat doing sentry duty in one of the WPA-designed grotto enclosures. 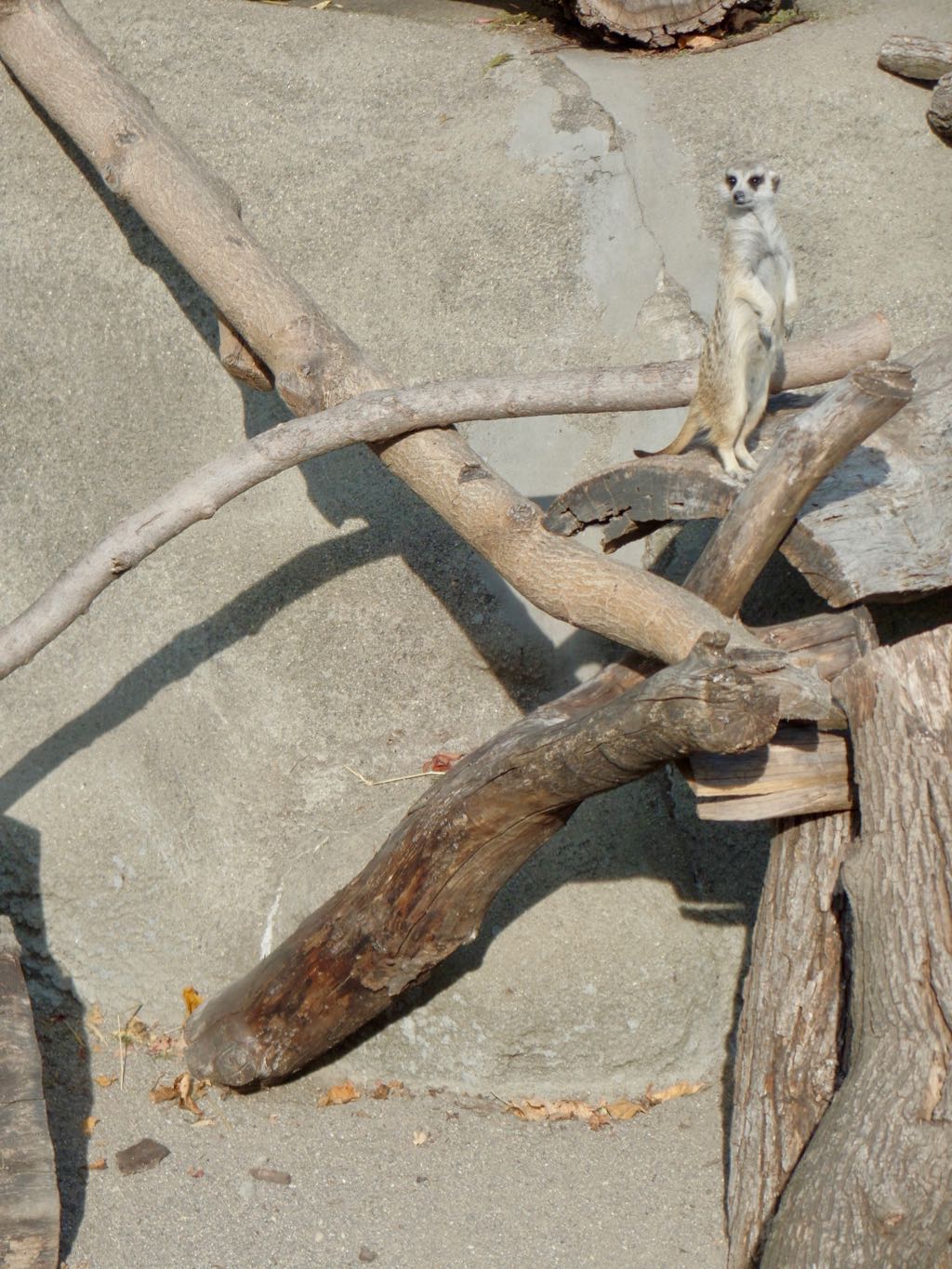 That sentry meerkat again. Have to admire the persevering nature that after all this time without lions or anything the meerkats are still watching. 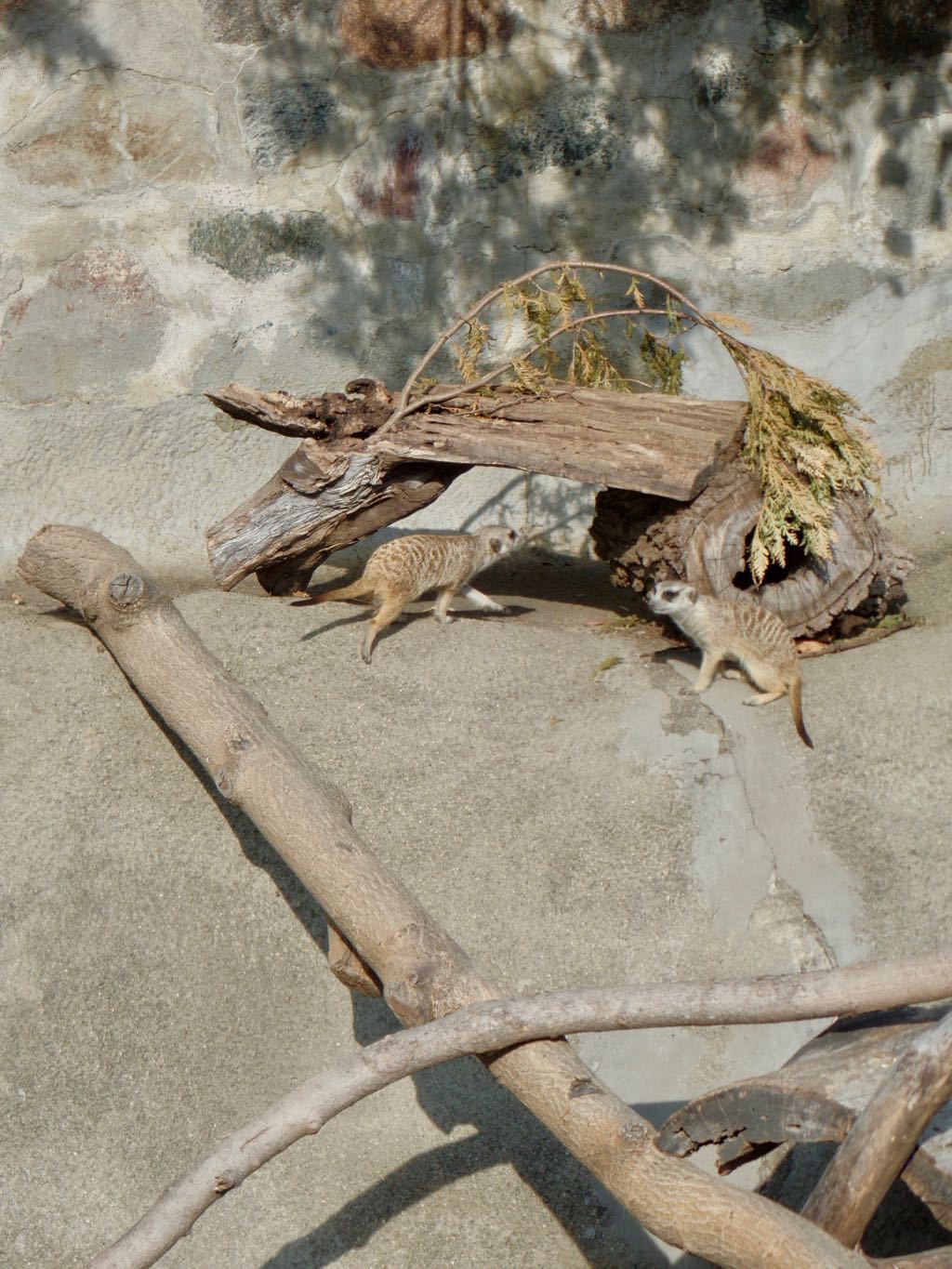 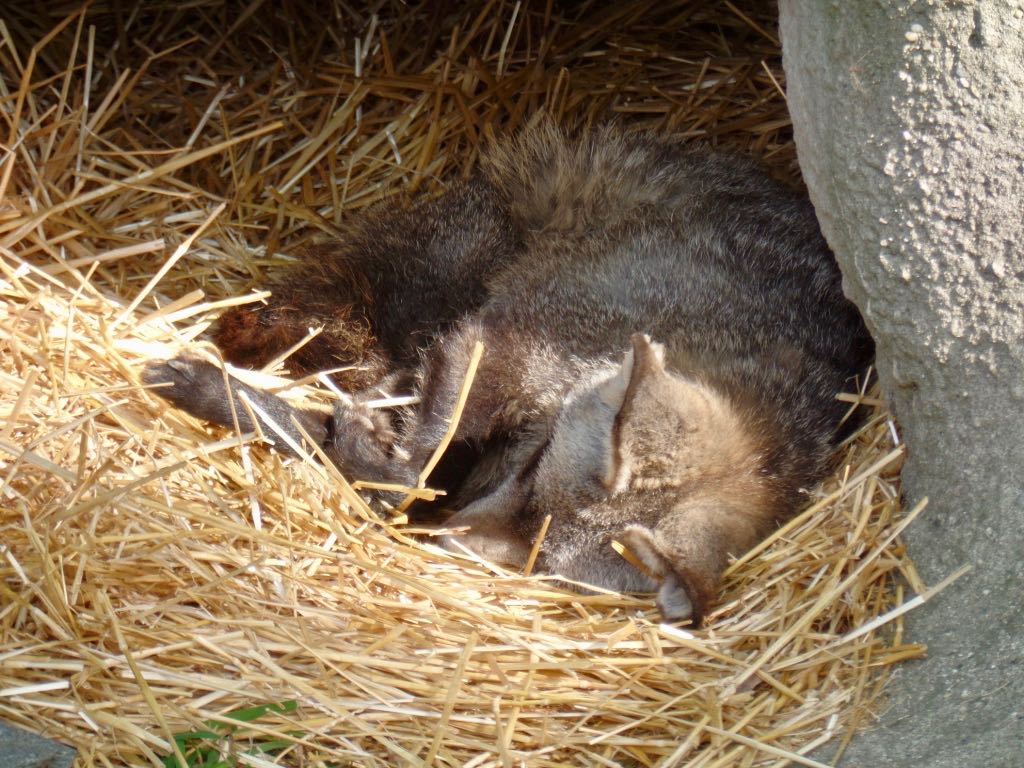 Bat-eared fox who's already checked out for the day. 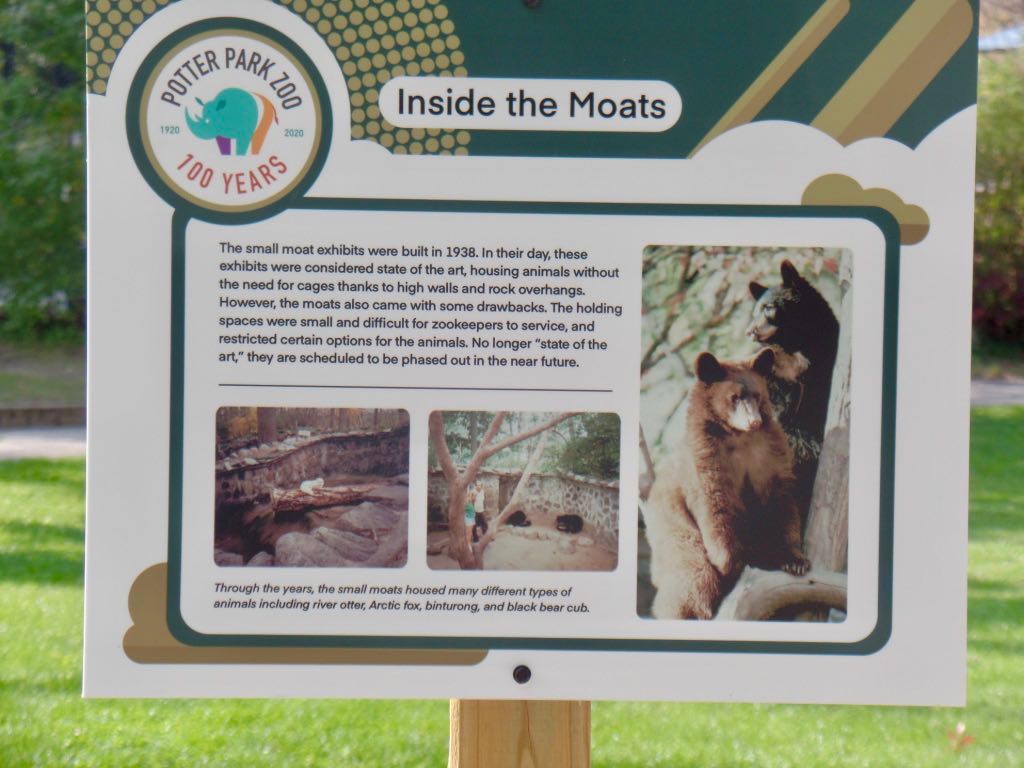 A plaque about the moat exhibits, like the meerkats and bat-eared fox are in. The sign warns they'll be replaced in the ``near future'', although there've been rumors about their imminent replacement for a long while now. 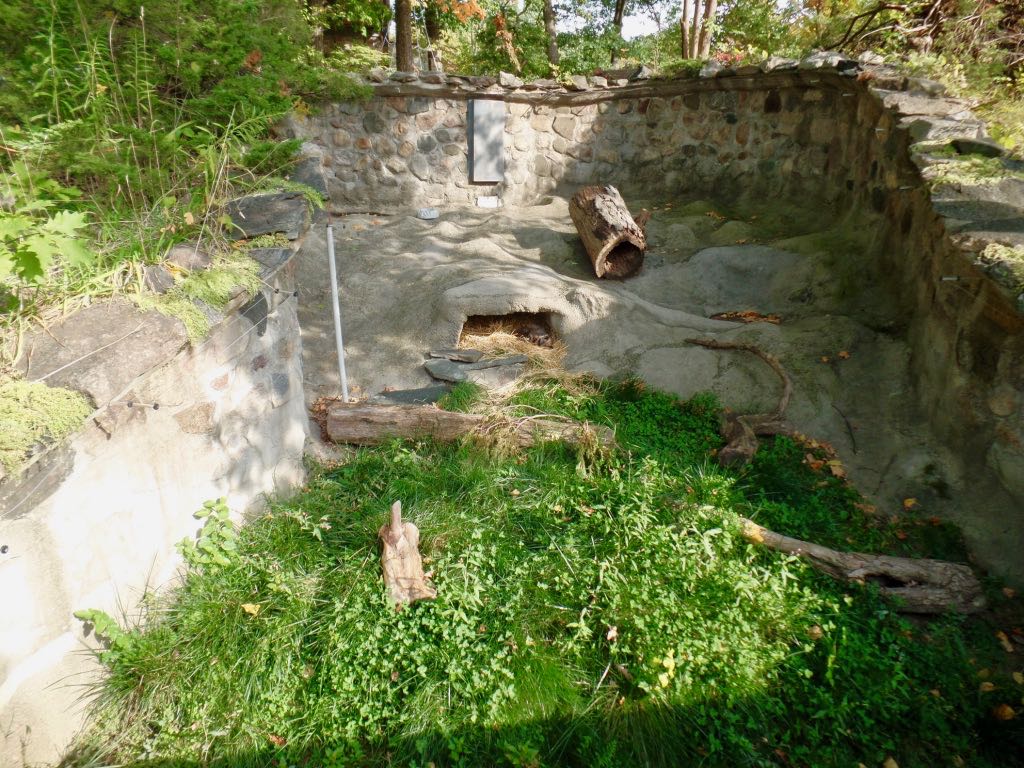 Trivia: In August 1979 NASA extended an invitation to Canada to name payload specialist for one seat on the space shuttle. No reply was ever received, apparently as the addressed person (former chair of the federal committee on space John Chapman) unexpectedly died in September. Source: Canadarm and Collaboration: How Canada's Astronauts and Space Robots Explore New Worlds, Elizabeth Howell.

PS: The 145th Playful Math Education Blog Carnival is posted, and I had nothing to do with it! But, please, enjoy.