I'll be all in clover

Personally good news! Meijer Pharmacy had appointments Thursday. It's only two days sooner, but hey, it's two less days of risk of death or long-term injury. I'll take it.

I had assumed all along that we'd spend Easter weekend at

bunny_hugger's parents. Her parents seemed of the idea that we would just come over Sunday. I did say I'd like to stay overnight, if it was not too much burden on them. They were glad to have us, though I do worry that it was a burden. But I also reasoned that since the only completely unvaccinated person was me, it was no riskier our getting together for a weekend than it would be to spend a few hours sitting in the yard. But spending the night would allow us time to do things like play Mice And Mystics, and perhaps watch It's The Easter Beagle, Charlie Brown. Yes to the first, no to the second. We watched nothing, although

bunny_hugger's father did suggest we could watch The Little Rascals. And then laughed it off as a silly idea since nobody was interested. I had wondered if the whole thing was a misfired joke until seeing that no, he had a hefty box set of The Little Rascals.

bunny_hugger's mother mentioned how she found the shorts excruciating, so I suppose this is a new mania of his.

But also given Fezziwig's condition this seemed like the only way her parents could see him a last time. They didn't get to know our mouse as well as they would have without the pandemic --- they should have taken care of him while we went to AnthrOhio, and Pinburgh, and at least one amusement park trip. Possibly also Motor City Fur[ry] con and Halloweekends. And seen him coming up here for a couple times. This could at least be a moment feeling a potential relationship.

We're out of practice getting stuff into the car and moving efficiently. Fortunately we overlooked only one thing: my wallet. (And my pens and chapstick, kept with my wallet.) I didn't discover this until the evening when I realized something was awry. No actual harm done, but we're lucky this wasn't a Cedar Point trip.

The tradition visiting her parents is that we eat far too much, and that held up. But please understand, they had a medicine ball-size bowl of nacho chips with guacamole to eat. Also all the Oreos in the world. And, for dinner, frozen pizza that

bunny_hugger's father improves by covering three inches deep in cheese. Yes, I put on three pounds during the two days there (though one's already gone away again). This is all just fine.

And now! Our first time playing Mice and Mystics since the 14th of March, 2020, the early days of the pandemic. Setting back up took longer than expected, and we had points in our notes that we did not really understand anymore. We were at the start of a new chapter, but the notes said we had to not use any of the characters that we used in the previous chapter, which were ... ? We're fairly confident we worked this out, at least. And so, finally! After 13 months away from the game, we stepped right back in, facing the wimpiest minions in the game box, and got the whole party killed in three turns. Well, we stopped after two and a half turns when we realized how dire it was, and re-set.

This time? The second time around, it went great. We got nearly all the lucky rolls. We even felt good enough to take a side quest that baffled us by not having any actual rewards for our accomplishment. We were lucky enough to be able to reverse the progress clock, making later encounters easier, but that was a matter of a lucky card draw. Also we made use of one of the special one-time items to make our lives much easier. We also later realized we forgot about a special one-time and a special durable item that would also have saved us trouble. Still, doing great for being out of practice.

We only had time to get halfway through the adventure Saturday night, so we wrote down the state of things and packed the game back up, in the hope that Sunday would give us the chance to finish the adventure.

A lot of neighborhood houses decorated for Halloween 2020. I think it's more than usual but since I wasn't walking in past years I can't say for sure. Still, for the next couple days I'd like to bring you slices of this. 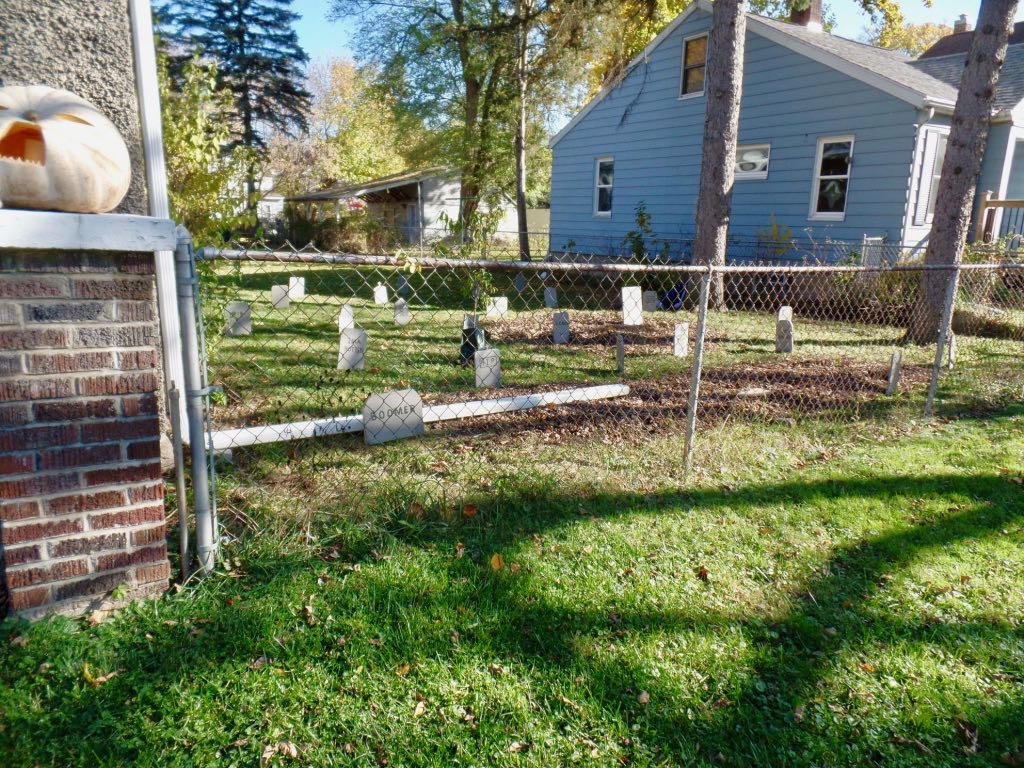 House the next block over that set up a comic graveyard. I notice right up front is B.O.OMER in case you thought generational squabbles were a thing of the pre-Covid era. 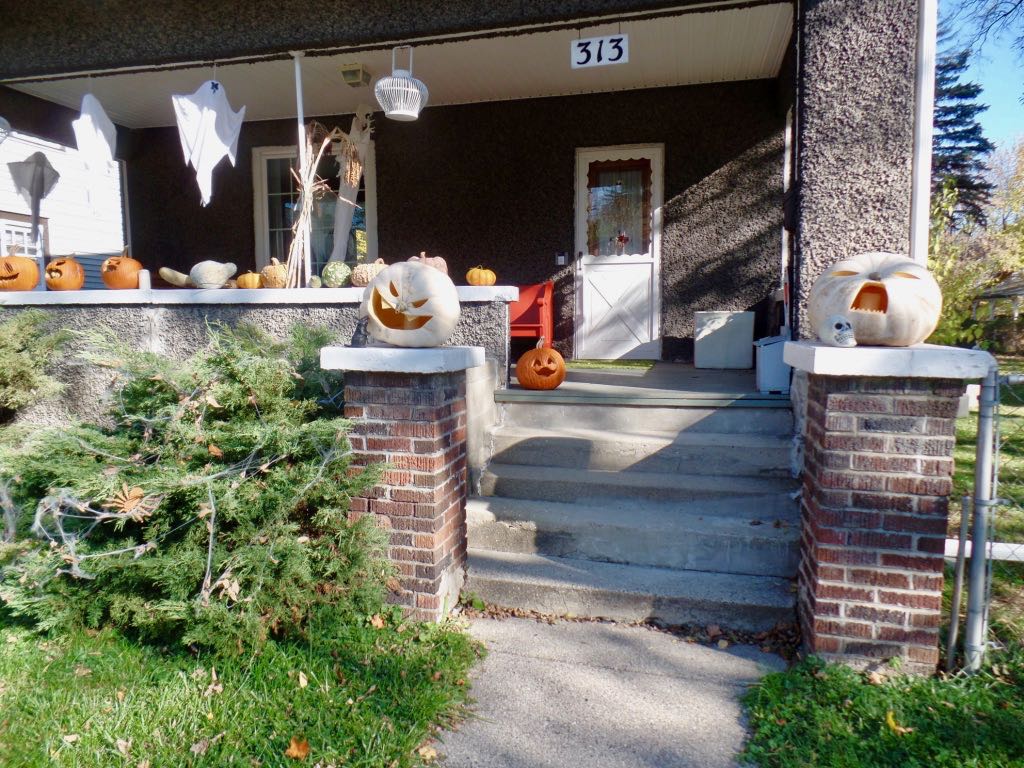 The front porch of that house and I admire their commitment to theming that this would be house number 313. 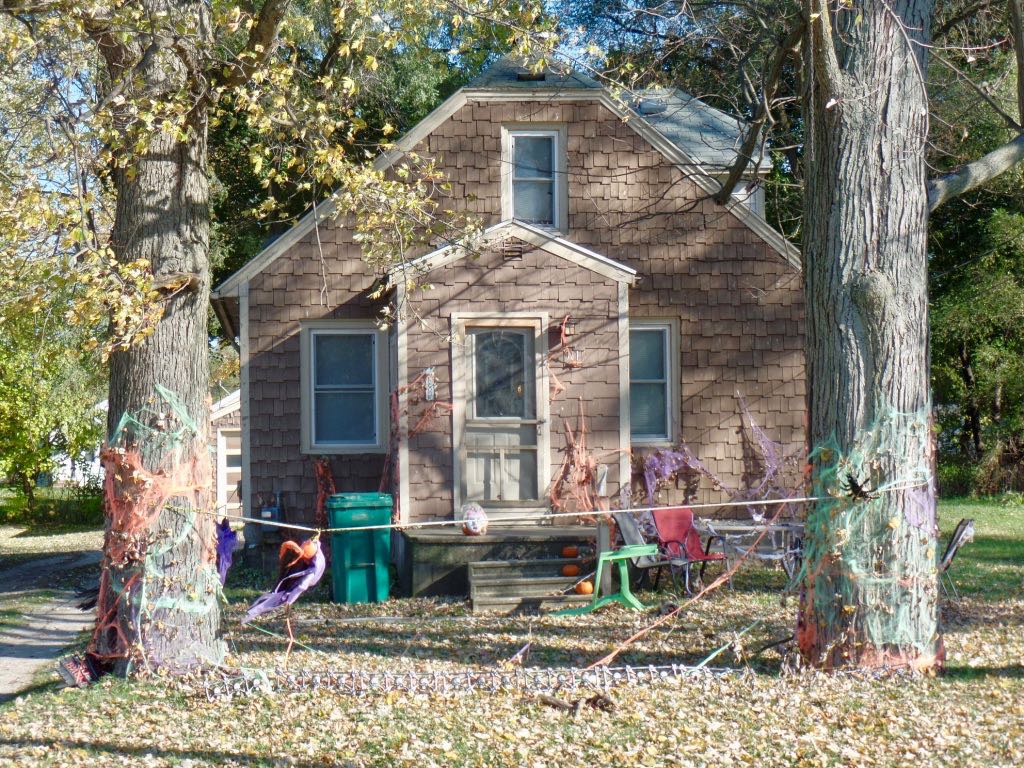 Another home with a well-filled front yard. I wonder what the squirrels make of this sort of temporary rope and netting. 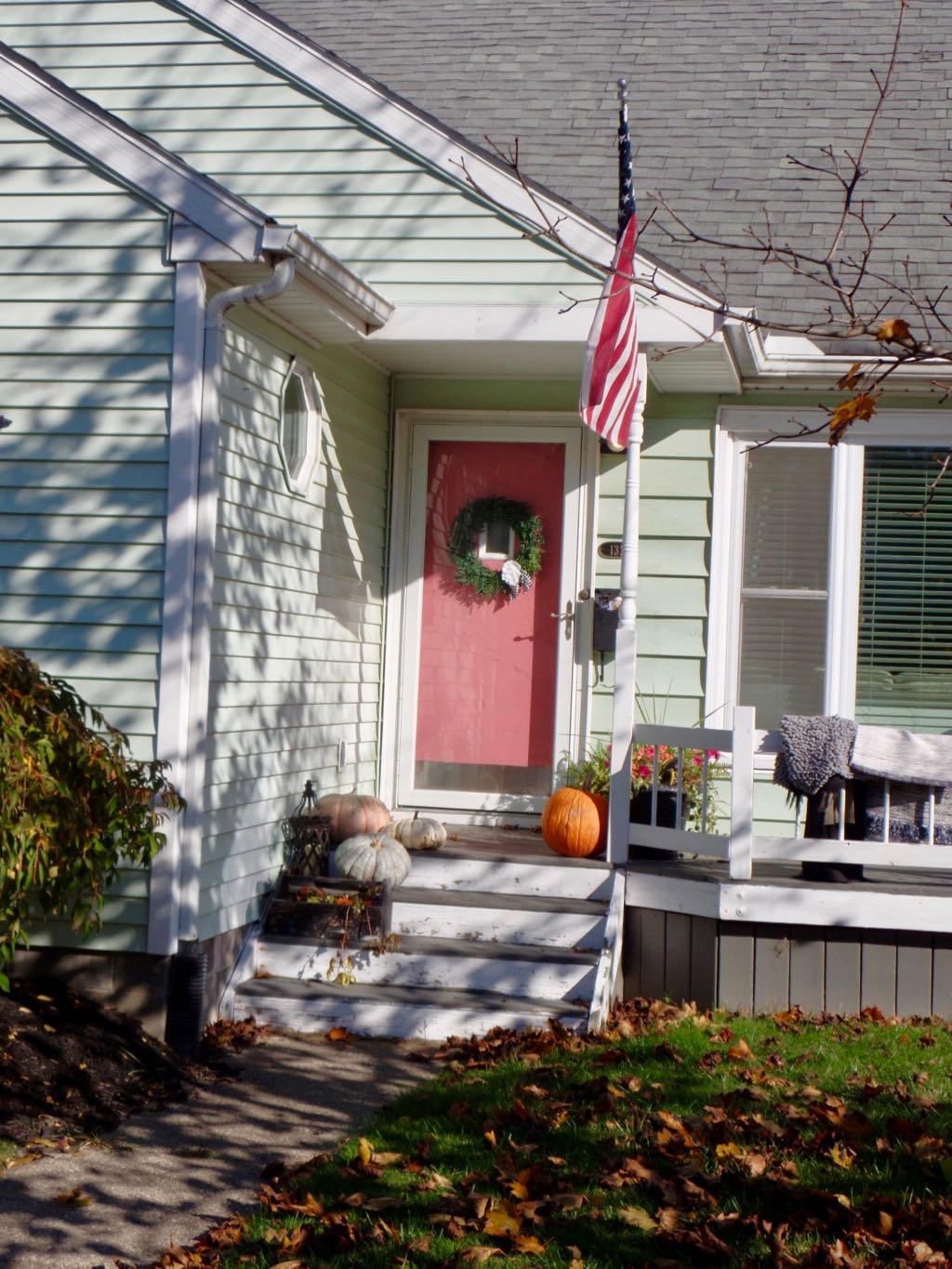 Here's a house decorated for Ralph, the All-Purpose Holiday, covering Halloween (the pumpkins), Christmas (the wreath), Memorial Day and 4th of July (the flag), Mother's Day (the flowers), and Spring Cleaning (the rugs over the fence). 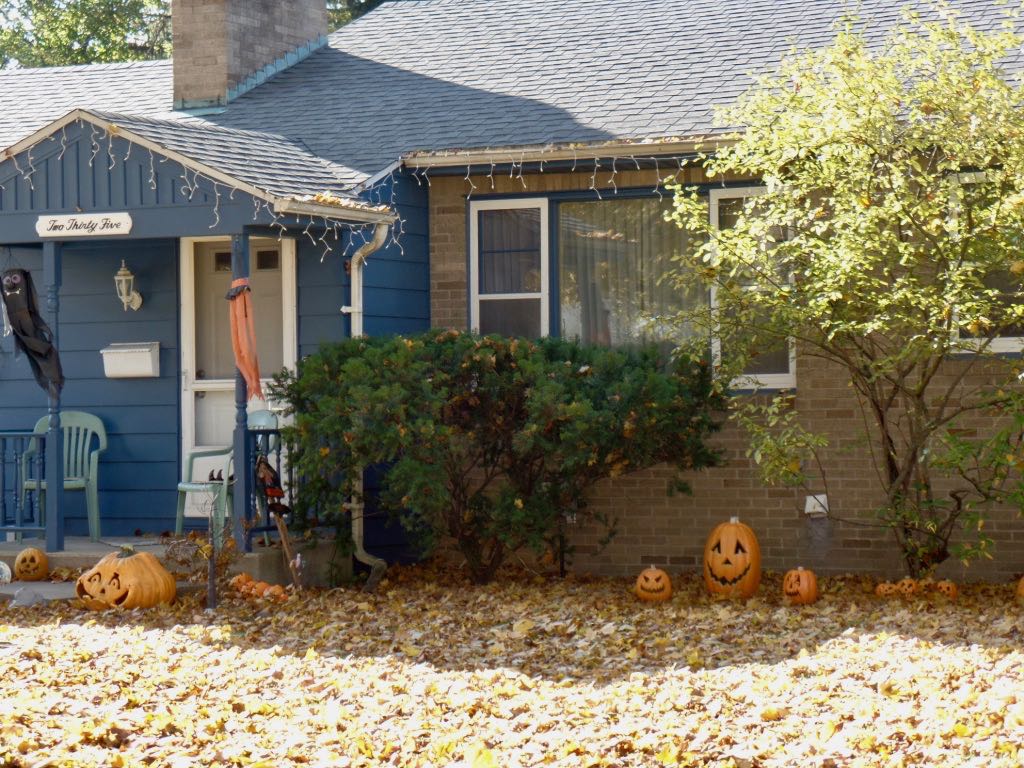 Whole bunch of pumpkins and ghost figures here, plus icicle lighting. I don't know whether these were orange-and-purple lights or just white icicles pressed into early service. 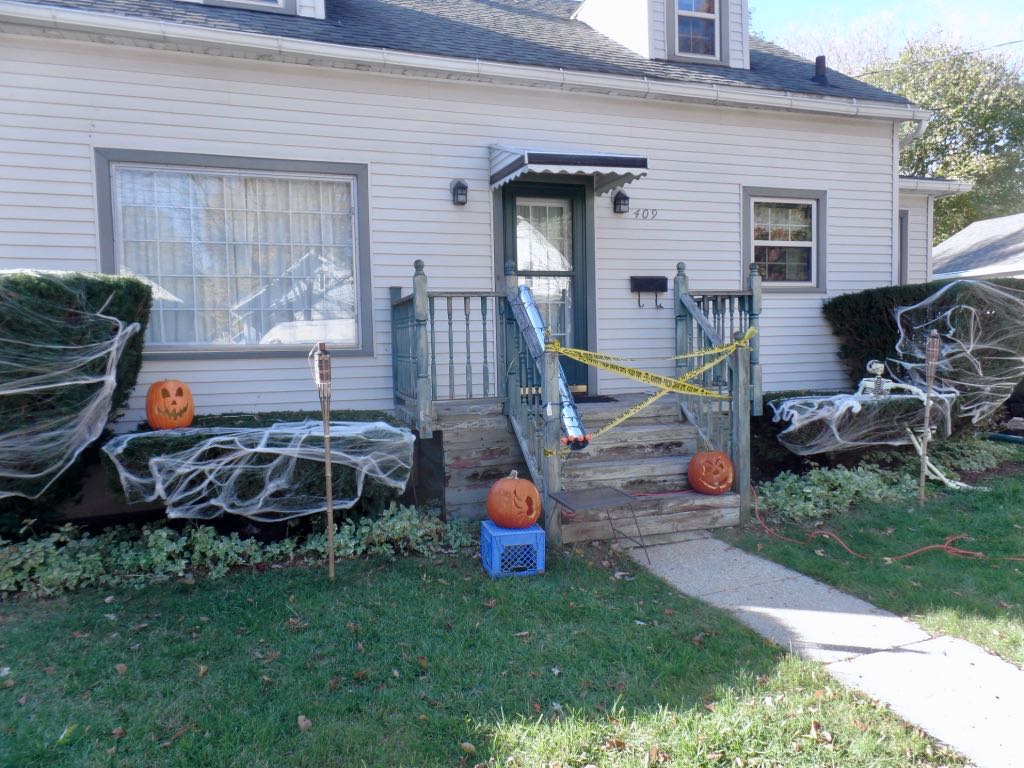 House that's set up a chute for trick-or-treaters to get distant candy. I assume they figure the mail's already come for today. 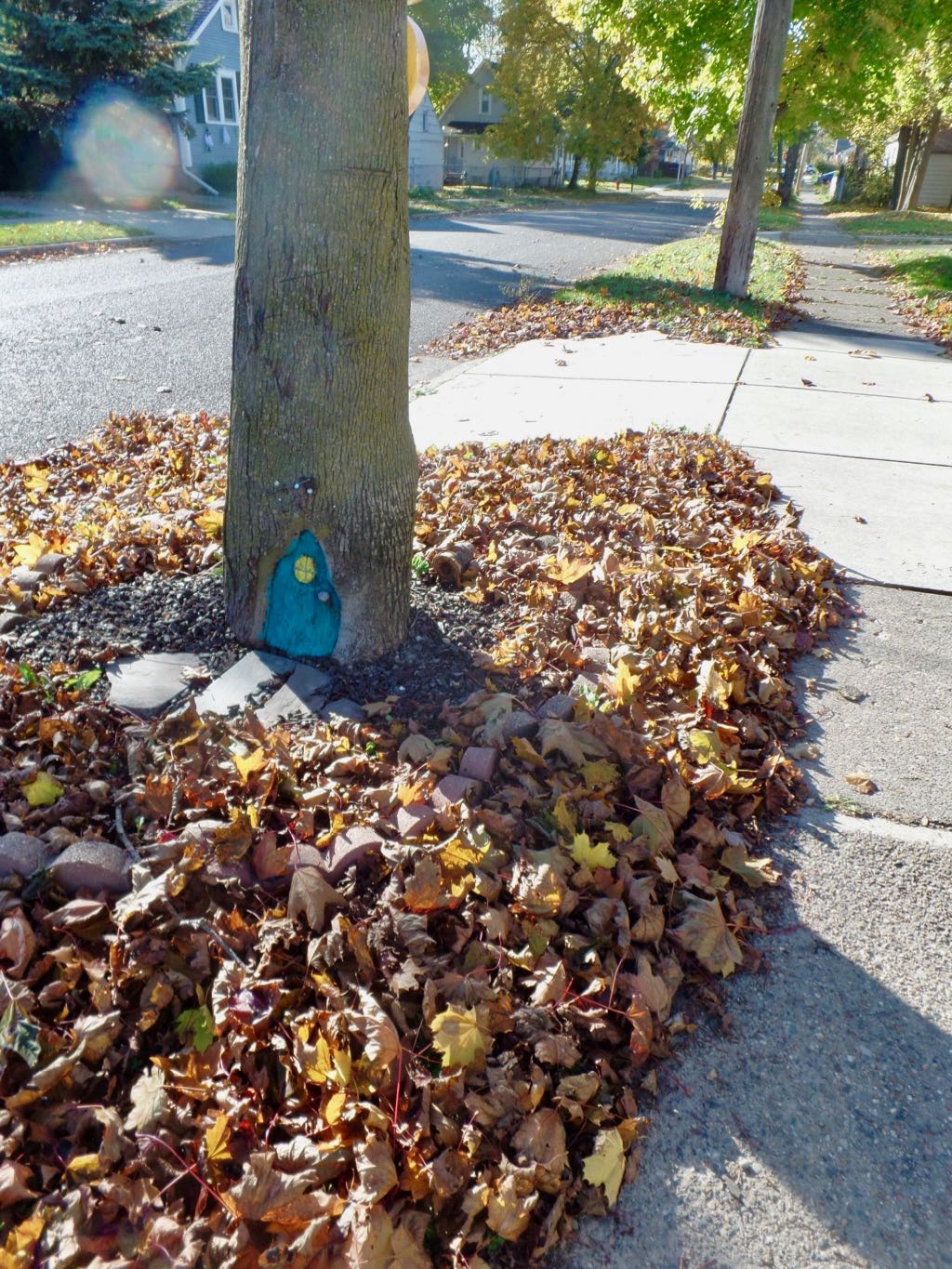 Oh, and here's a fairy door someone set up in their front tree. 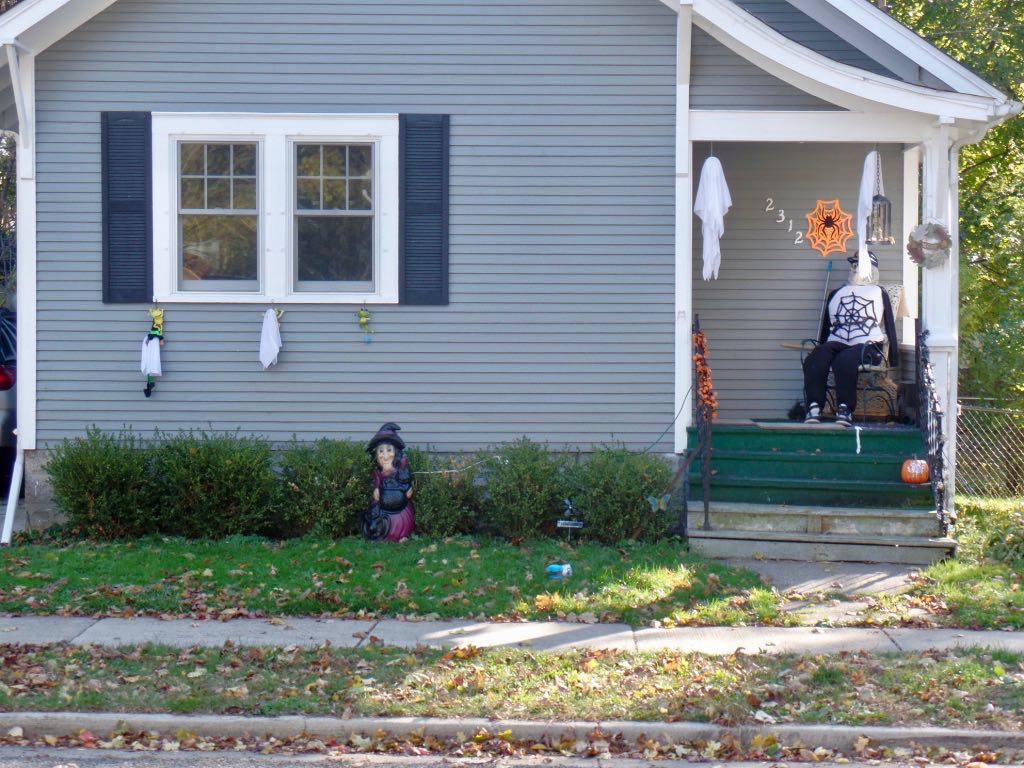 Ghosts and other figures hanging out in the front yard. 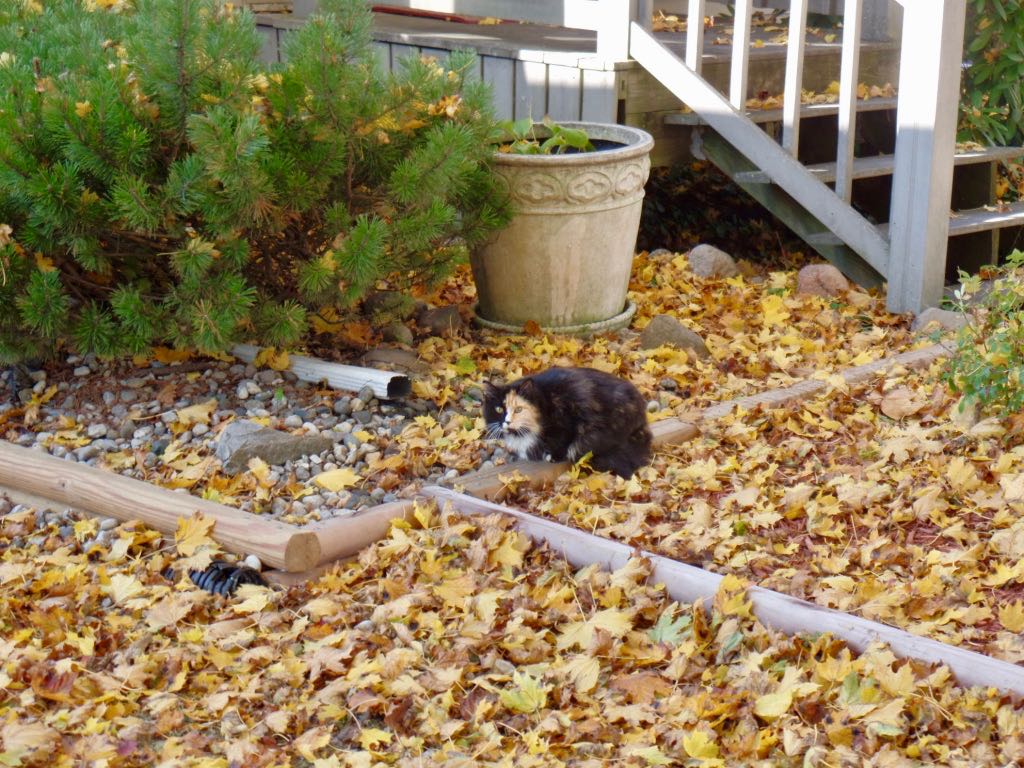 That is one realistic-looking cat prowling around!

Trivia: Before its 1902 purchase by the New York Times, the triangular lot at Broadway and 42nd Street --- the heart of Times Square --- was occupied by the nine-story Pabst building. The area was a center for the manufacture and repair of carriages and harnesses. Source: The Epic of New York City: A Narrative History, Edward Robb Ellis.

Currently Reading: Thurber: A Biography, Burton Bernstein. So apparently Thurber and Fred Allen were great fans of each other. When they finally met, though, each was afraid to talk for fear of boring the other and the dinner was a disaster. Boy if that isn't a mood. (They would get to chatting, but by mail, instead of hanging out in person.)

PS: In the story comics I explain What's Going On In The Phantom (weekdays)? Who is this John X? for the January to April plot recap.