And when they look you over

bunny_hugger's parents wondered whether Pookie's whimpering and crying woke us up. Not me, no. I suspect Pookie covering my face wouldn't wake me up. But

bunny_hugger always has a harder time sleeping than I do. We had the proper bed again, not the air mattress, but it wasn't really wide enough for the two of us and she considered the air mattress, which was deflated.

Breakfast/lunch was scrambled eggs, a specialty of her father's. We started dyeing eggs in the early afternoon, in time to get a call from her brother and the proposal to have a Facetime chat. That would eventually happen. I thought to try something and put an egg in the blue dye partway through the call, just to see what happens if you leave the egg in forever. It turns out that this comes out great, with colors as intense as you hope Easter eggs will have. It's just a bottleneck when you only have the six dyes to give everybody fifteen minutes to set. It might be worth it, though.

Our egg dye of choice this year was Dudley's and

bunny_hugger disapproved of the change in Dudley's figure. His 60s-70s design looked like, you know, contemporary cel animation for a TV special. The redesign makes him that blobby shapeless thing you get when you're told to do a CGI rendition of a character and don't have time to design it. Worse, though, is that the dyes never seemed to fully dissolve. Maybe we didn't use hot enough water. Maybe we used vinegar in ones that shouldn't have had vinegar. But even crushing the tablets and stirring left little pellets of potential dye un-dissolved, however long we took. This wasn't all bad; somehow, for example, this caused speckles on nearly every egg, including the 15-minute ones. It's gorgeous but if you want a solid color that messed things up.

We also had an 80s Radical coloring set, bits of food dye and plastic bags to just squirt eggs into and roll around. In previous years this was the 60s Tie-Dye coloring set and it makes more sense as that. A tiny bit of dye goes a long, long way; I ended up using the leftovers of

bunny_hugger's rad 80s tie-dyes and still had pretty good egg swirls out of it.

I took a nice walk around town, seeing the park and the downtown areas. You'll be seeing those photographs in ... under a year? Probably. And called my parents to confirm they had a quiet Easter and hadn't done anything much since I last talked to them Wednesday.

After dinner (Welsh rarebit) we did set up for Mice and Mystics again --- it went quicker this time --- and we resumed the chapter. Our good luck faltered, as we were getting just creamed once again by roaches, the pettiest of minions. I finally ended up using a bit of (non-limited) magic to get the last roach off the board. And then we remembered we had a party item that would have let us get rid of half the roaches effortlessly. Well, for next time, then. We did not get to the end of the chapter, but we did get a good bit closer and we are --- touch wood --- still in really great shape to succeed. Here's hoping.

We couldn't spend a second night, or even stay past midnight this night, as

bunny_hugger had to teach Monday morning. So we gave our farewells, and let her parents say goodbye to Fezziwig, and set out with our half of the eggs and leftover rarebit and all. Not included: a pedometer that her father bought because he had the chance to buy a pedometer;

bunny_hugger doesn't need one and I don't much care to meter my peds. But yes included: some long bamboo sticks of the kind they use to keep thick burgers together because it turns out you get a lot of food-holding bamboo sticks in an order. Then I had to come back in, looking for a lost cell phone, until

bunny_hugger called from my car to say it was found. I suspected as much when I heard the phone ring.

I drove home, safe and sound, despite not having my wallet and thus my license.

More walking around the neighborhood on Halloween 2020, here. Person putting up a bunch of skeleton netting over the bushes. 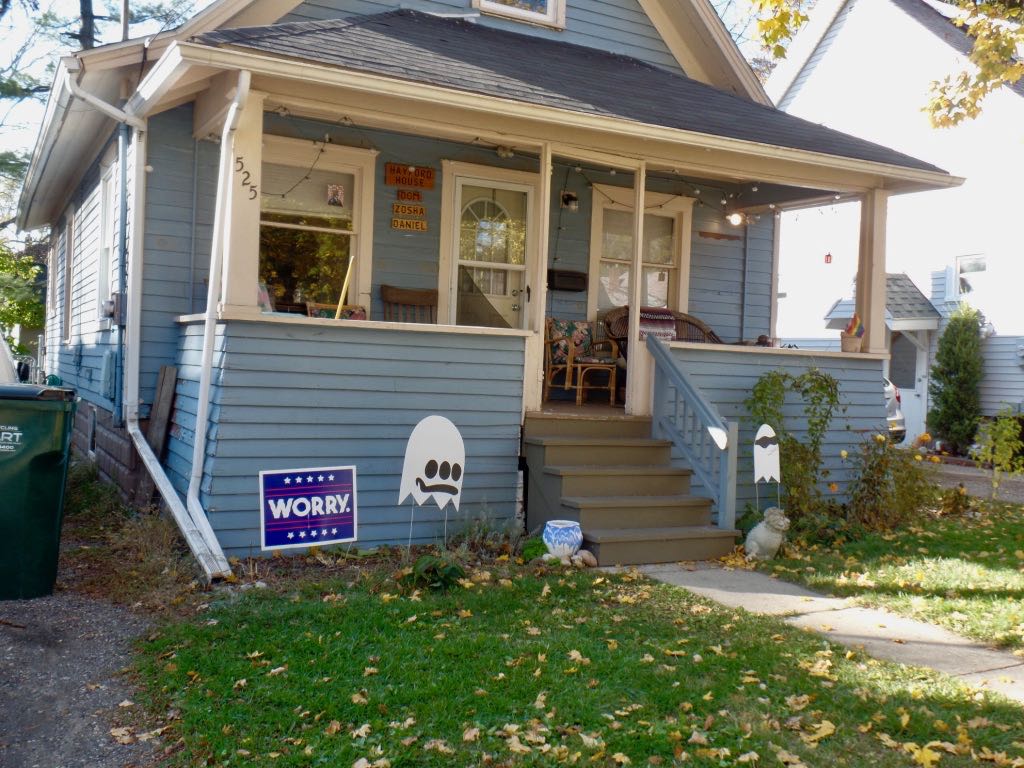 Some cool Pac-Man-style ghosts hanging around the yard. 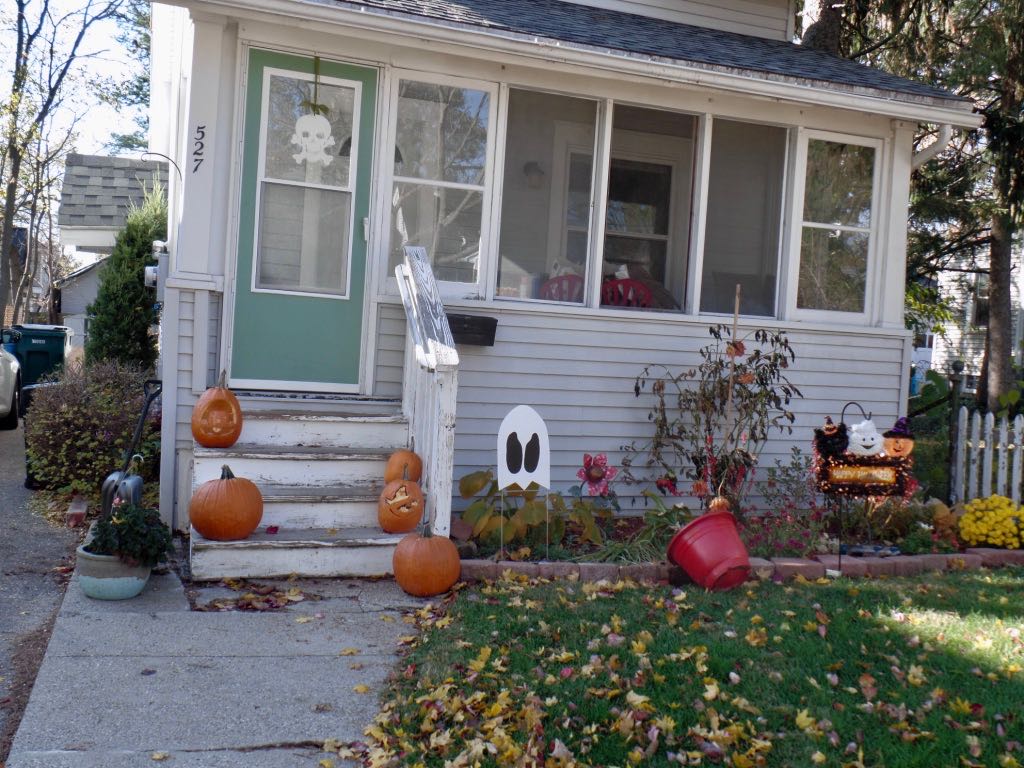 And another of those Pac-Man-ish ghosts. What's going on here? 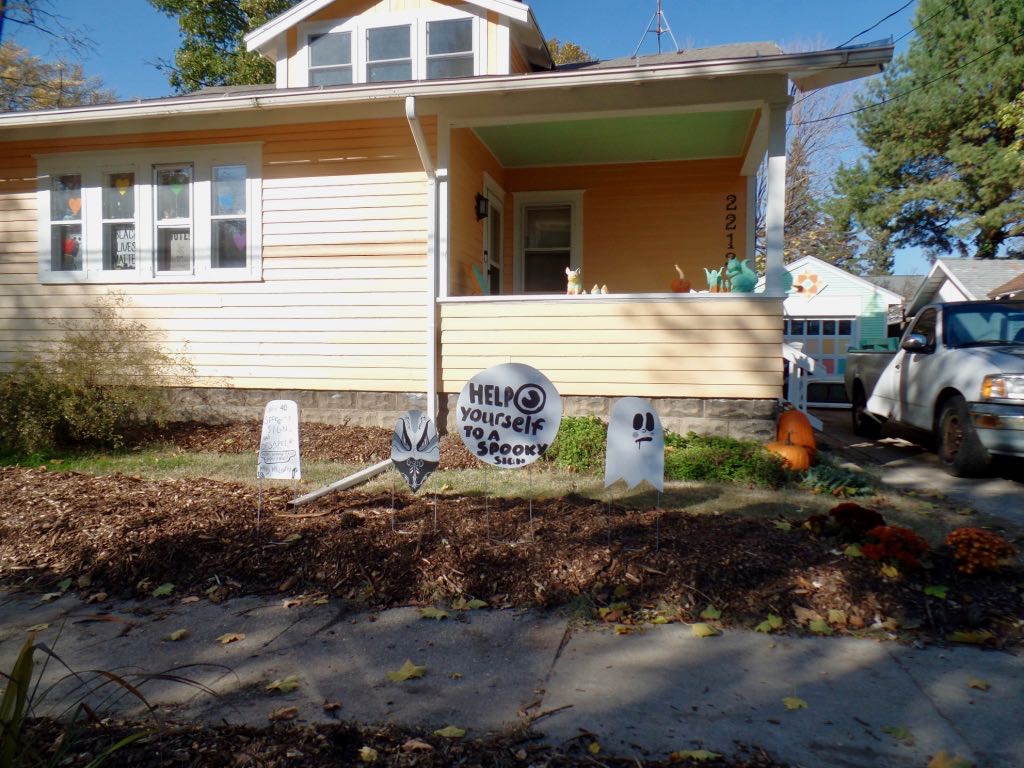 Here's what's going on here: this house made a bunch and gave them out. They'd get up to a dozen blocks away that I saw. 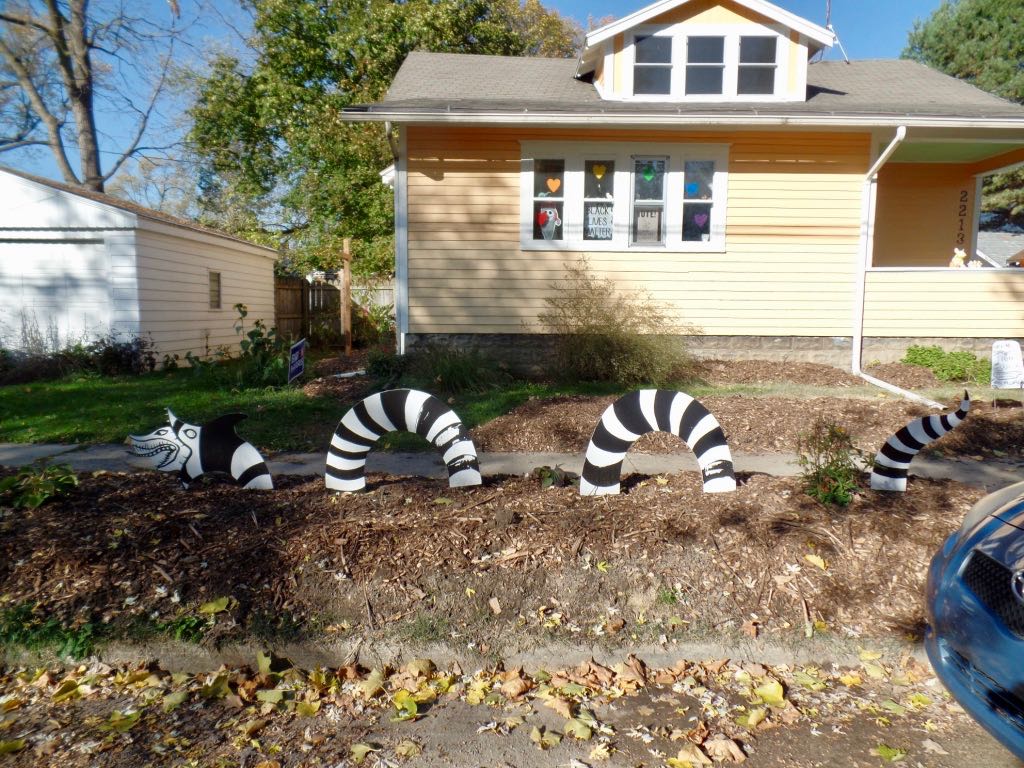 And the most impressive standee at that house: this Beetlejuice-y land serpent. I don't know if this was meant to be included in the ``help yourself'' category and I don't think anyone else dared take it. 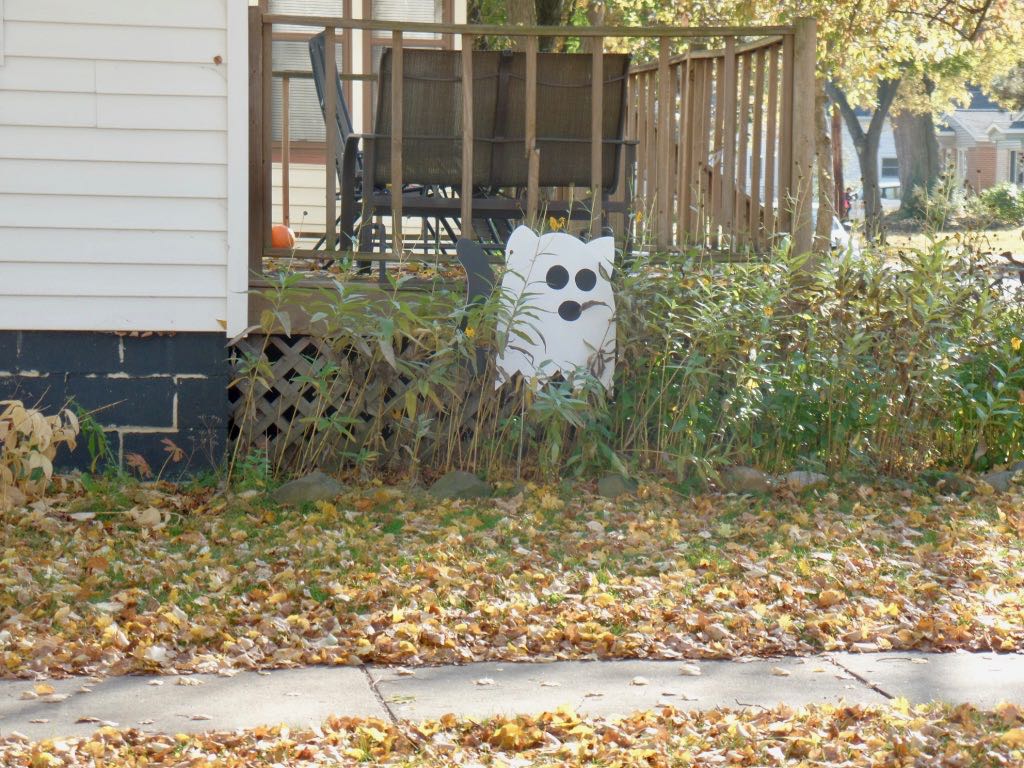 This one's less spooky and more startled or a bowling ball. 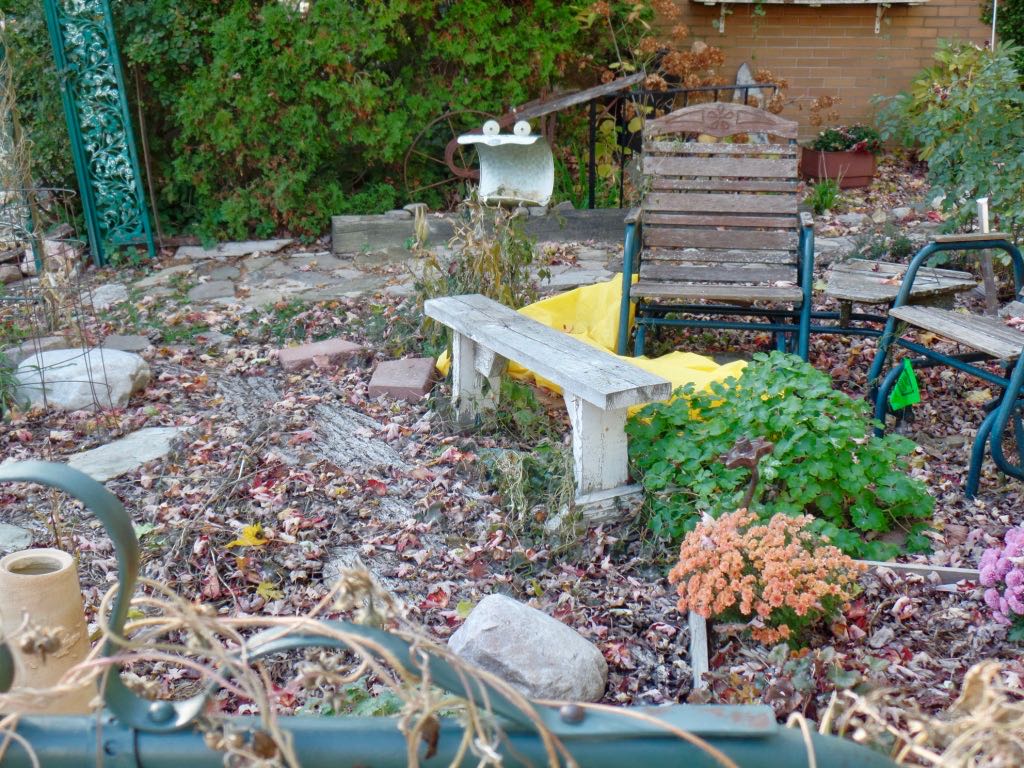 And here's someone who just decorated their backyard to the point it looks like a Northport Italian restaurant's patio dining. 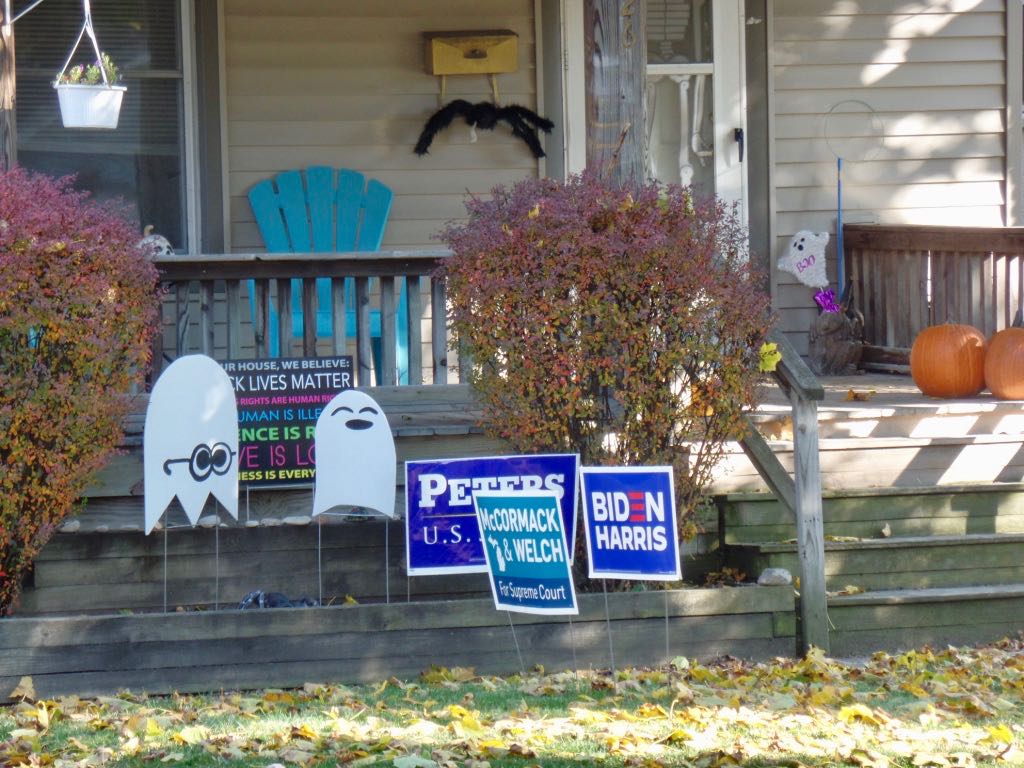 Some spooky signs plus the reminder that oh yeah, the election was still ahead. 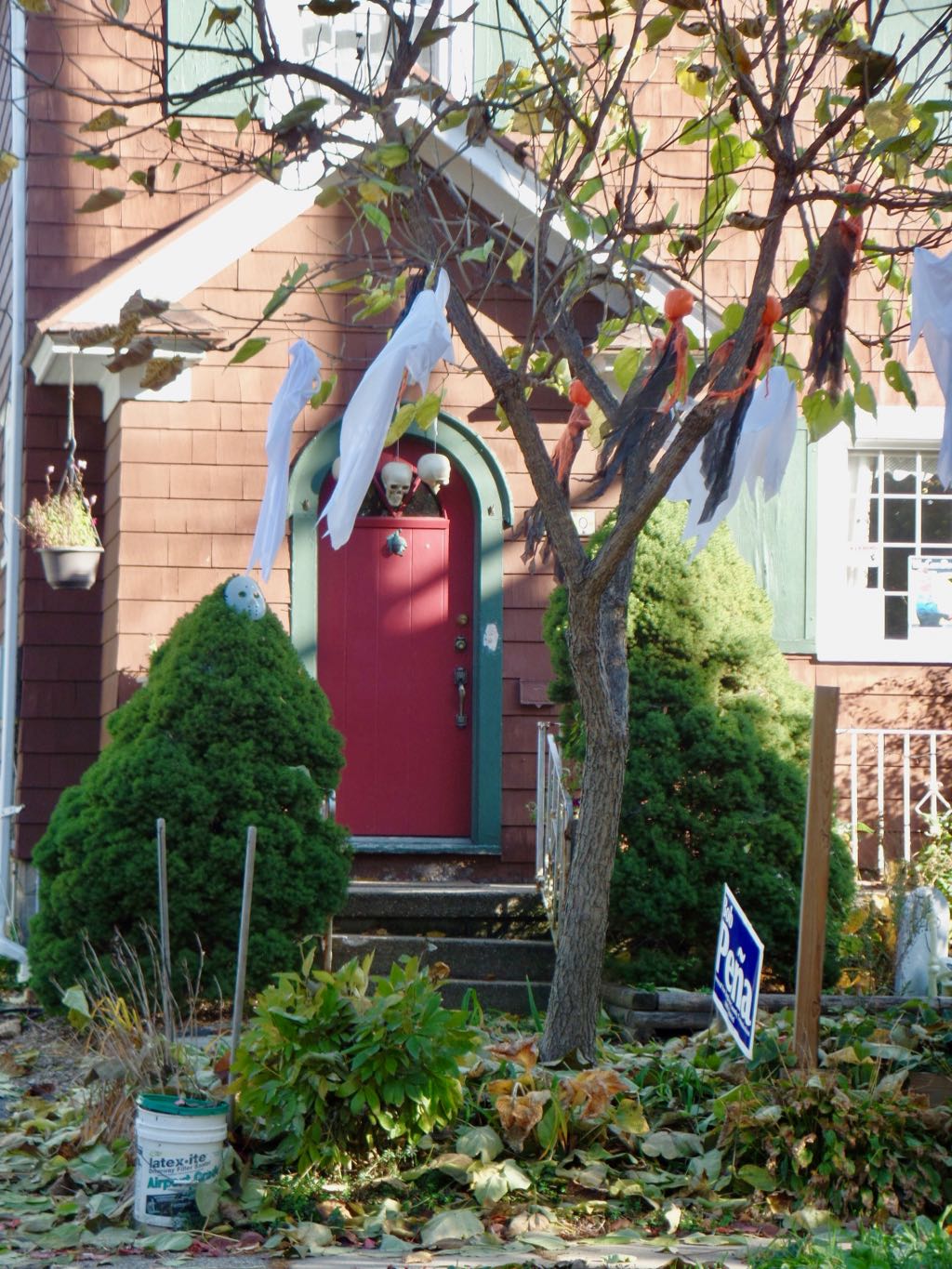 Trivia: The first known self-propelled toy locomotive was a wind-up produced by a Connecticut clock manufacturer in 1856. It did not run on rails. Source: Wondrous Contrivances: Technology at the Threshold, Merritt Ierley.

Currently Reading: Thurber: A Biography, Burton Bernstein. Oh, now, this is an interesting flight of fancy, from a letter Thurber wrote while in Bermuda recovering from writing The Male Animal (the play):

The only ideas I've had down here don't amount to much. I'm going to do a book of animal drawings for young and old, with text describing them: the bandicoot, the platypus, the coatimundi, Bosman's potto, the aardvark, and half a hundred others. The kind of easy and soothing idea that a broken-down playwright gets.

Nothing seems to have come of it (it was big talk while recuperating from an ordeal) but, oh, what an interesting prospect.

PS: How March 2020 Treated My Mathematics Blog, which was surprisingly good, I believe on the strength of Pi Day readers.