Even when I'm standing up

Thursday marked two weeks since my first injection, so I finally felt comfortable going out and into, like, the grocery store again. And just in time, as I needed to get my passport renewal in the mail. Yes, I properly speaking would have until April 2026 before I couldn't use the old passport to generate a new one. But I'd rather have my passport sooner rather than later. Which is not to say I was so eager to take care of it that I handled all this back in, say, February. (Although had I done that, I'd have had the hassle of not having the papers for my new corporate overlords's I-9 needs.)

I'd expected to pop in to Meijer's for passport photos, and called and learned the one near us doesn't take passport photos anymore. ``We don't even have a camera'', said the person at the photos department. This sounds like a lie, but I'll let them have it. I went instead to a Walgreen's that was more on the way toward the post office anyway. My photograph, with 14 months' of Covid-19 hair growth in, is going to have customs officials laughing for a decade to come. I don't mind, but

bunny_hugger is going to be embarrassed on my behalf, inappropriately. While waiting for my photos to print, some guy wandered into Walgreens and talked at BRIAN BLESSED NEEDS YOUR ATTENTION LEVELS about how, oh, they put all the goodies on the shelves here and the snack aisles were like subliminal advertising. He narrated his tour of the store and I don't know what he was getting at, but he seemed basically harmless.

I had printed out only the parts of the form that I needed to mail in, and at the post office started to have doubts. Like, did I need to staple in two copies of my photo or just one? Should I staple the two loose pages together? Should I paperclip them? And I cursed myself for not printing out the whole form, and then realized oh yeah, they have the whole application booklet in actual tangible form right there at the post office. So I could check that they only want the one copy of the photo and offer no guidance about how to reduce the risk of pages being separated. I used a paper clip to hold application, old passport, and check together and can only hope that all goes well. Shall know, I suppose, in a couple months.

The guy at the Walgreen's photo desk asked if I had any exciting travel plans ahead and I admitted, no, nothing. Just figure I might as well get this done while they can't be too busy at the National Passport Center. Although I suppose, if the pandemic recedes, we might drive through Ontario to get to upstate New York, and particularly Seabreeze park, this summer. Maybe. If things start going better.

Let's go back to Christmas 2020, and more pictures from around

bunny_hugger's parents. Don't worry about me getting up to 2021 anytime soon with these, by the way. We got to a lot of lights shows the last week of the year. 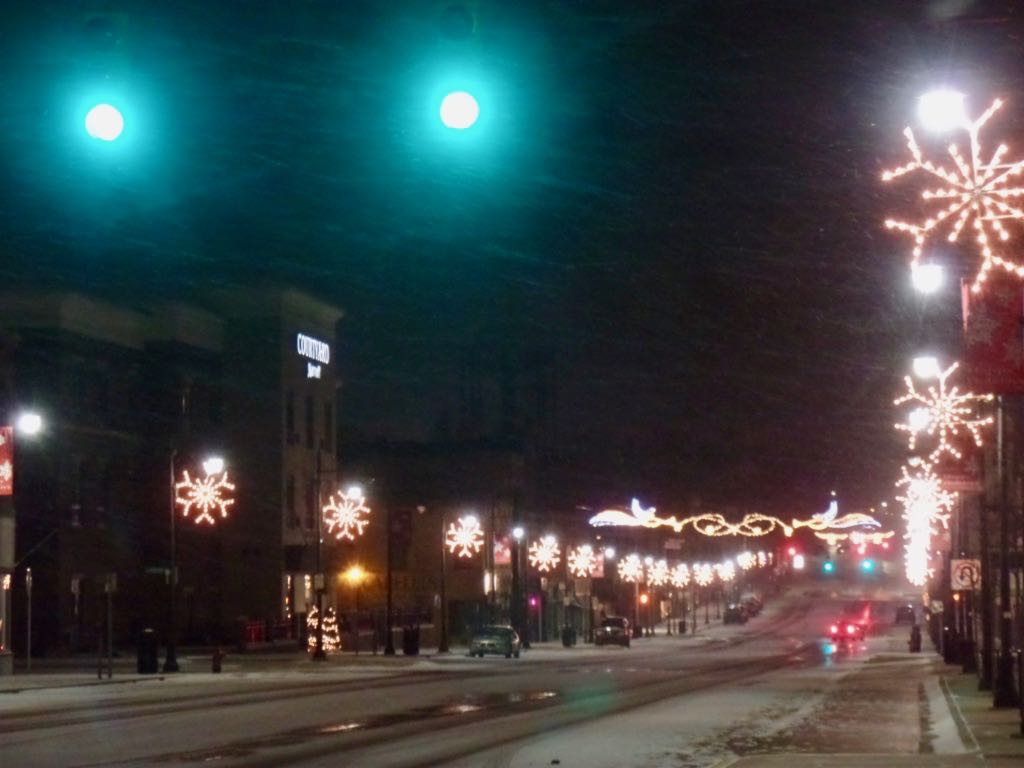 The main strip downtown, illuminated. And you can see it was still flurrying just a tiny bit. 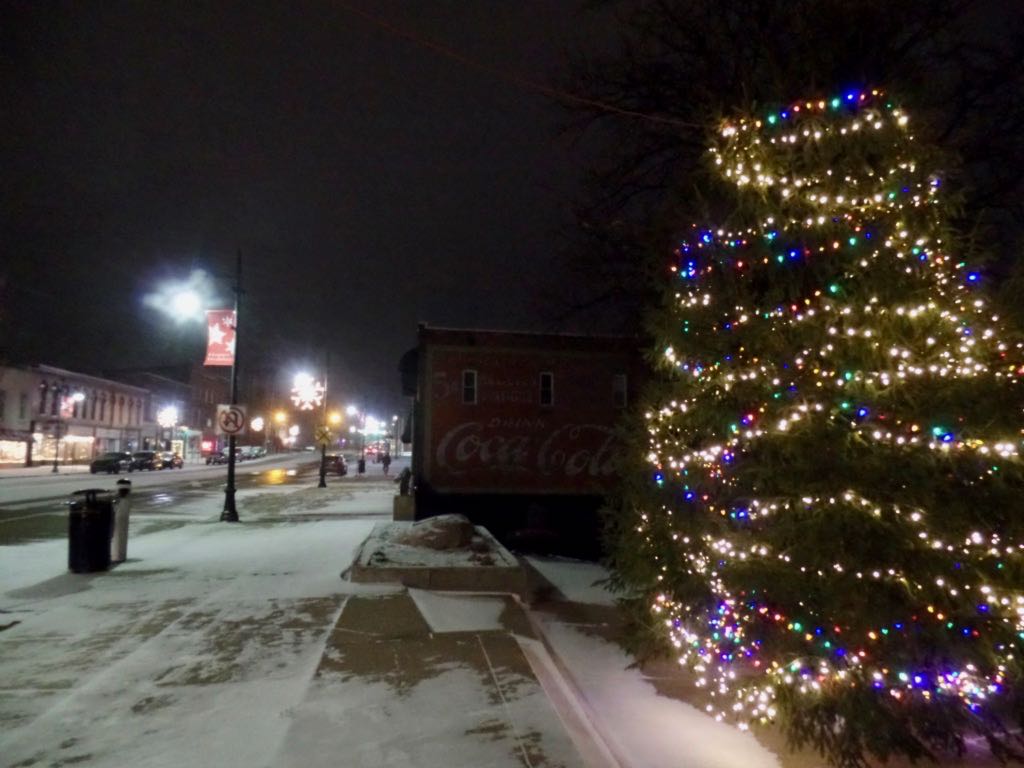 Downtown tree decorated in white and colored lights. This is right near that park that commemorated the electric shoe repair guy. 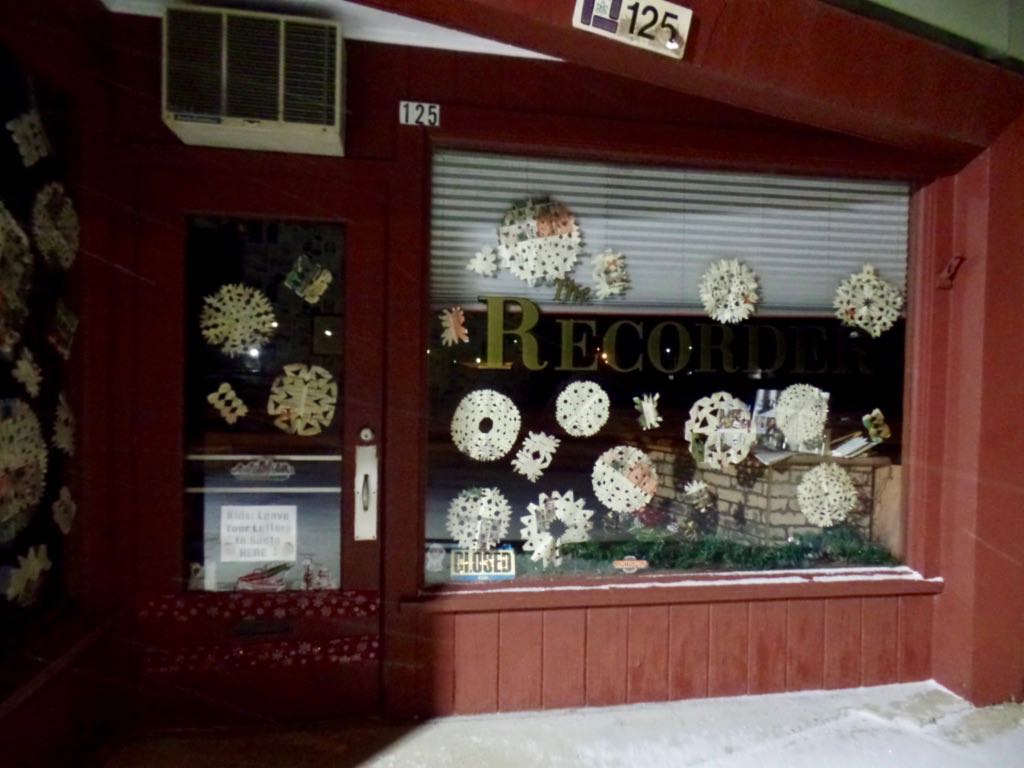 The offices of the Record have a great number of paper snowflakes. Pretty sure I didn't already photograph this porch. 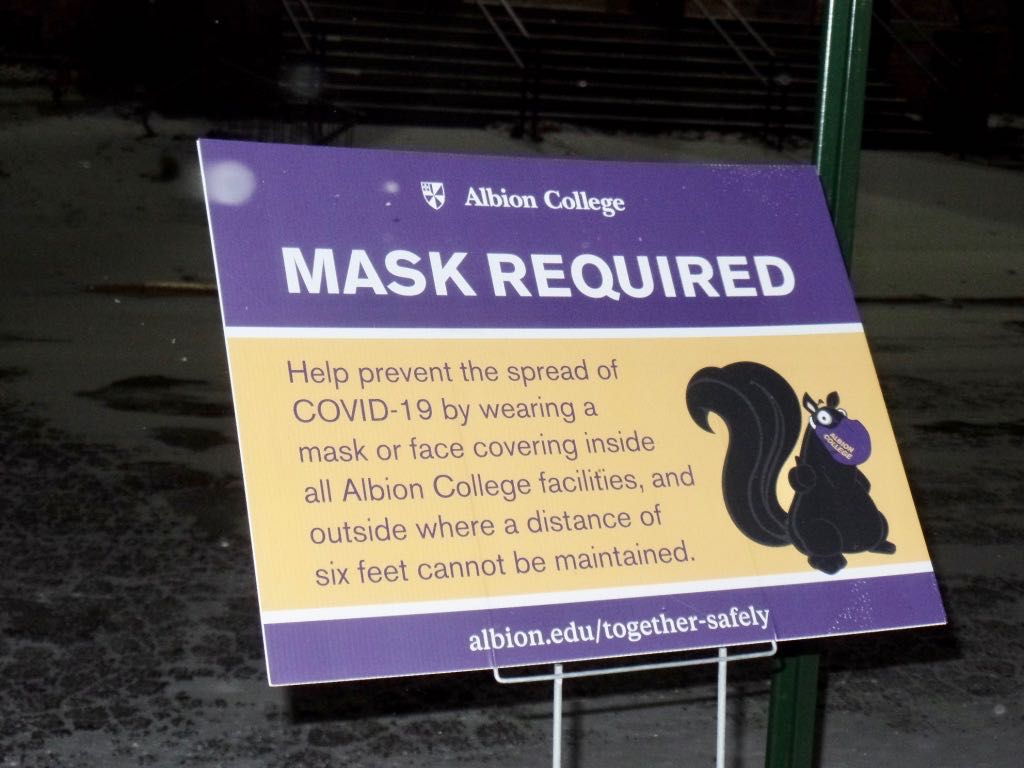 On campus the attempt to display a black squirrel wearing a mask manages to slightly better hit ``mischievous skunk wearing a mask''. 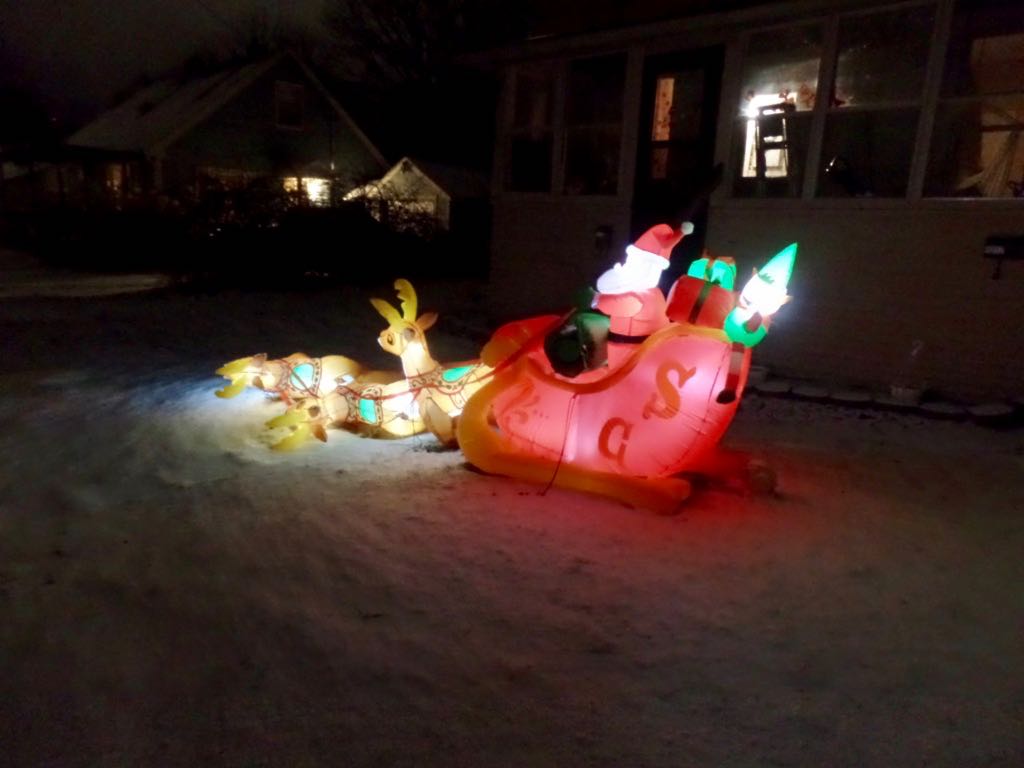 Santa's never going to get anywhere with his reindeer tipsy like this. 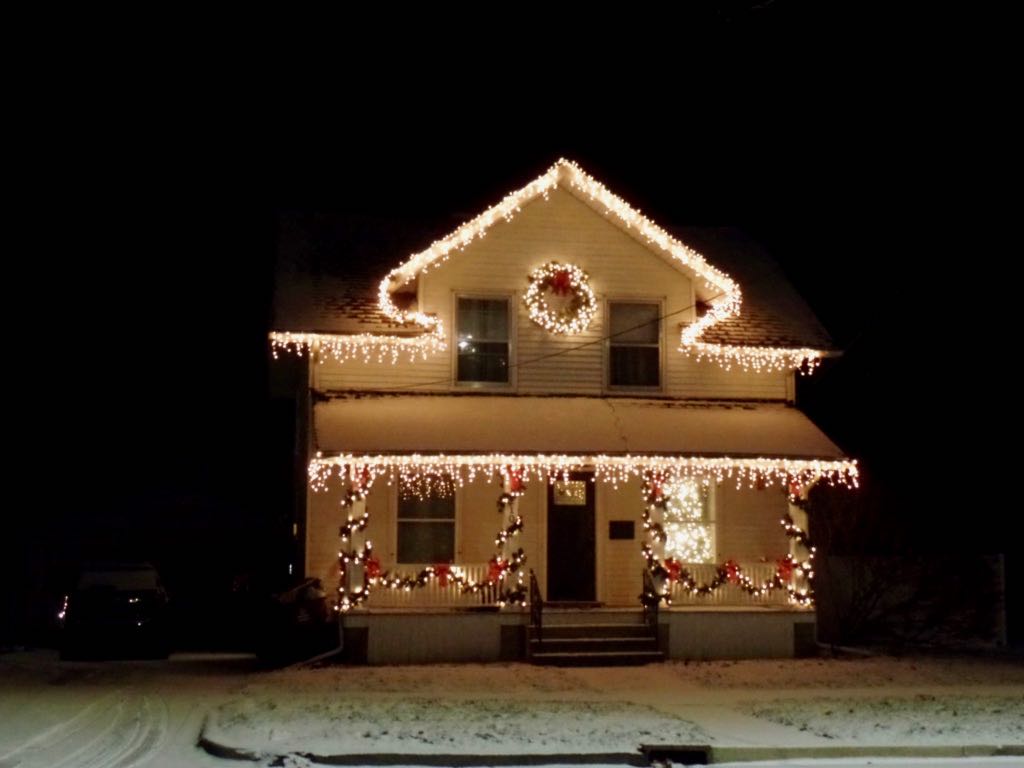 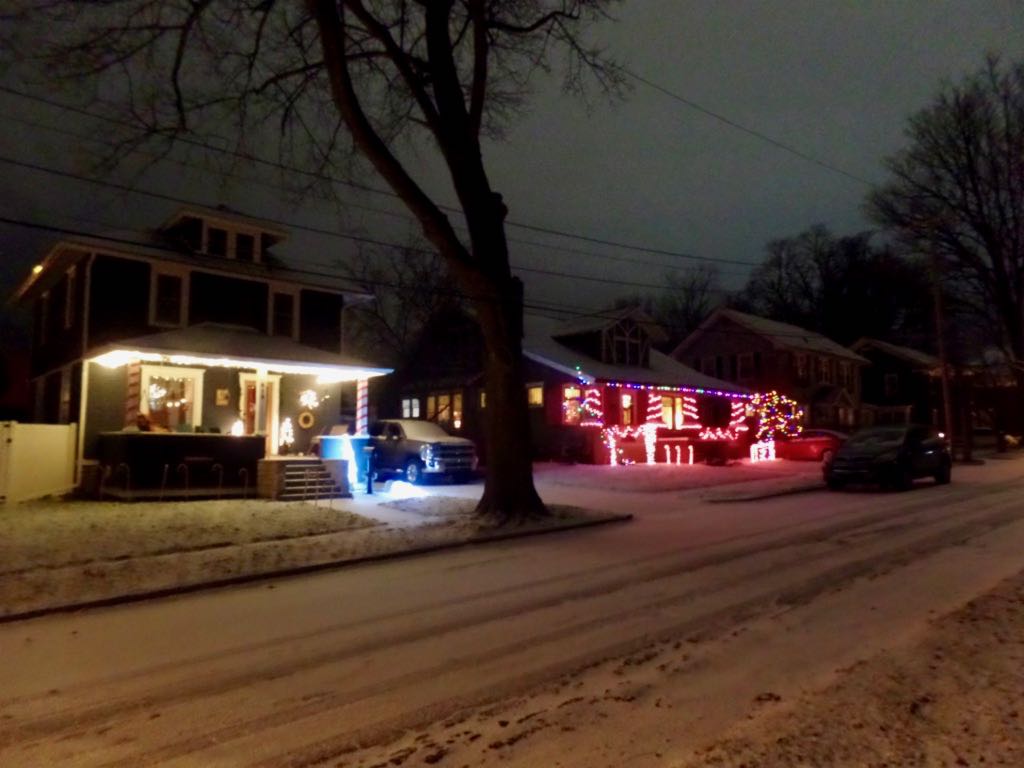 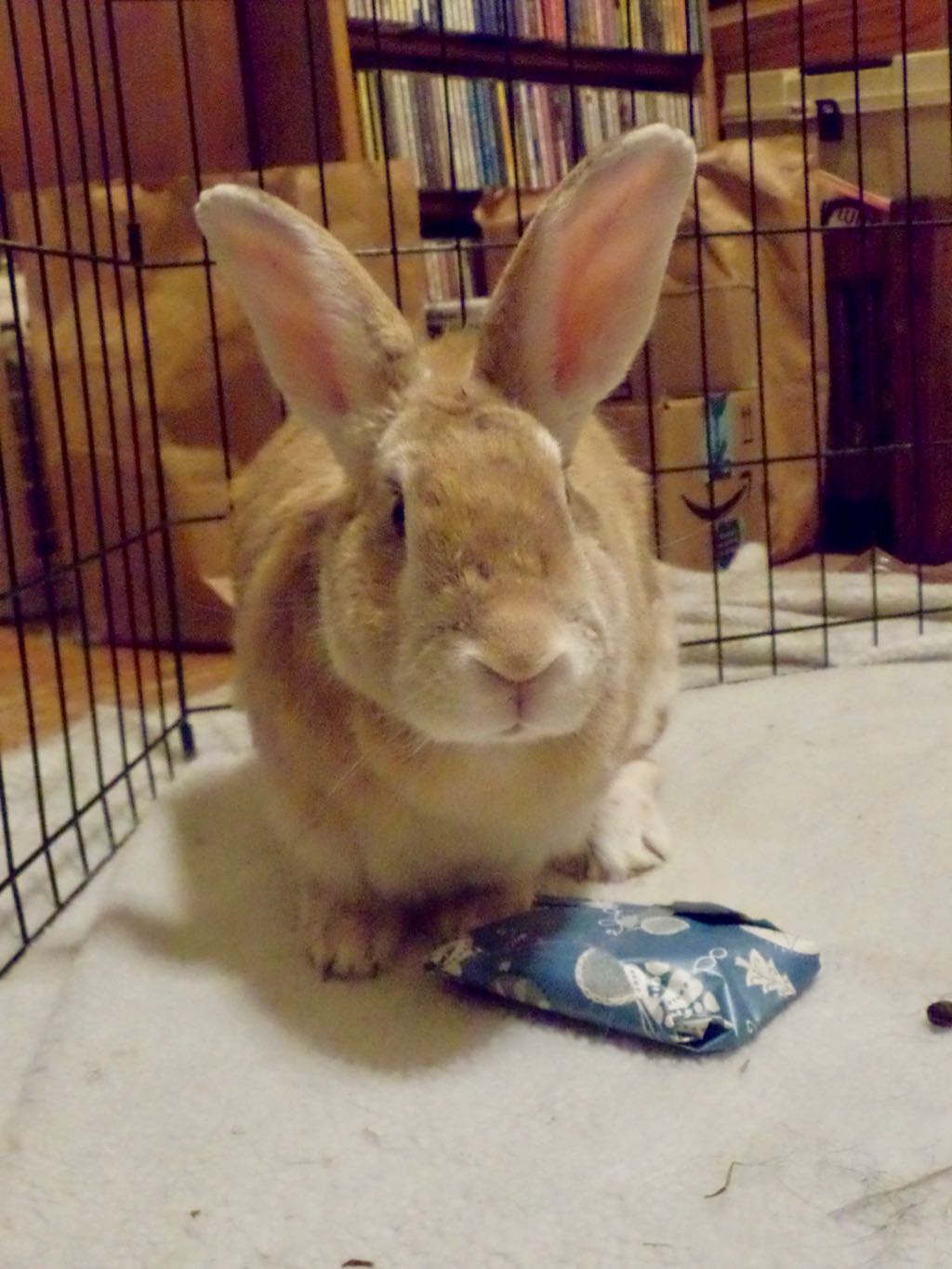 bunny_hugger's parents! Here we give our pet rabbit her present. 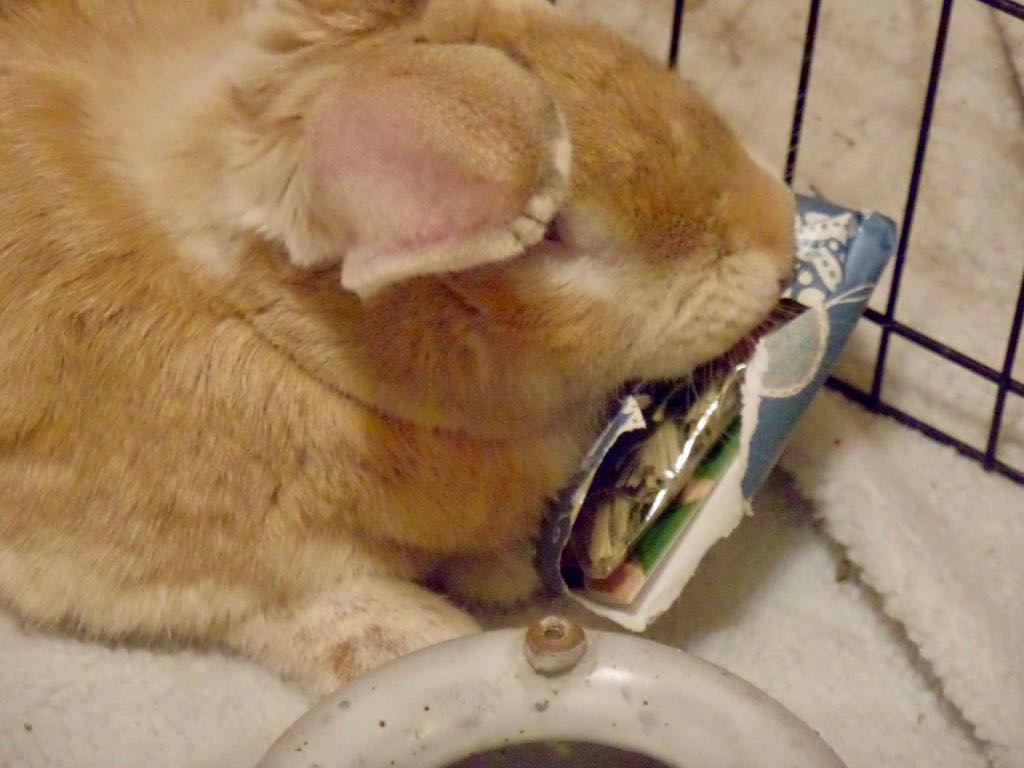 The present wasn't just the chance to chew paper, although that was a lot of the appeal.

Trivia: In December 1827, President John Quincy Adams wrote to Henry Clay that there was a ``base and profligate combination'' opposing him, and that the next year ``General Jackson will therefore be elected''. Source: Waking Giant: America in the Age of Jackson, David S Reynolds.