I got my second vaccination yesterday (Thursday). This at the same Meijer's on the southside of town that I visited three weeks before. It was a very fast process, almost alarmingly so; there were almost no people waiting in the queue and personally I'd like to see vaccination sites having as many people as they can possibly handle. But perhaps the Meijer is getting the hang of how to process people. Paperwork was much quicker this time around too. (Granting they also surely had my data in place from three weeks ago.) There was not a flyer with a bunch of coupons sitting on the waiting-area chairs, unfortunately, just a photocopied flyer to come work for Meijer which, happy to say, we don't need yet.

As for side-effects? Well, I went to bed last night feeling pretty tired, on the early side of my usual bedtime range. I was feeling cold, but I also always feel cold so who can say whether that amounted to anything? This morning I slept in through the morning, feeling achy and cold and not much wanting to get out of bed. Did take some painkillers and started feeling less bad when I did finally get up, and shower, and get downstairs and all. I'm still (writing this in the early evening) feeling achy and a bit out-of-it. The mental fog isn't anything worse than any cold would be. The aches are worse, though. I'm surely doing better for taking painkillers, though.

bunny_hugger reached 14 days from her second injection, so she's as well-immunized as can reasonably be expected.

Also in the last two weeks the number of daily new cases in Ingham County (containing most but not all of Lansing) has dropped about in half. If this rate continues then we'd be down to about one case per 100,000 people per day in about two months, right around our anniversary. And wouldn't that be a great 9th anniversary present, a return to just doing what we want without the reasonable fear of death or disability? But, don't worry, I'm sure our leadership will work hard to halt this decline in infections and needless misery.

In my photo roll we're still in December 2020. What could I possibly be taking so many pictures of between Christmas and New Year's? Well, there's one huge annual tradition that we haven't yet seen. Now, we see it. 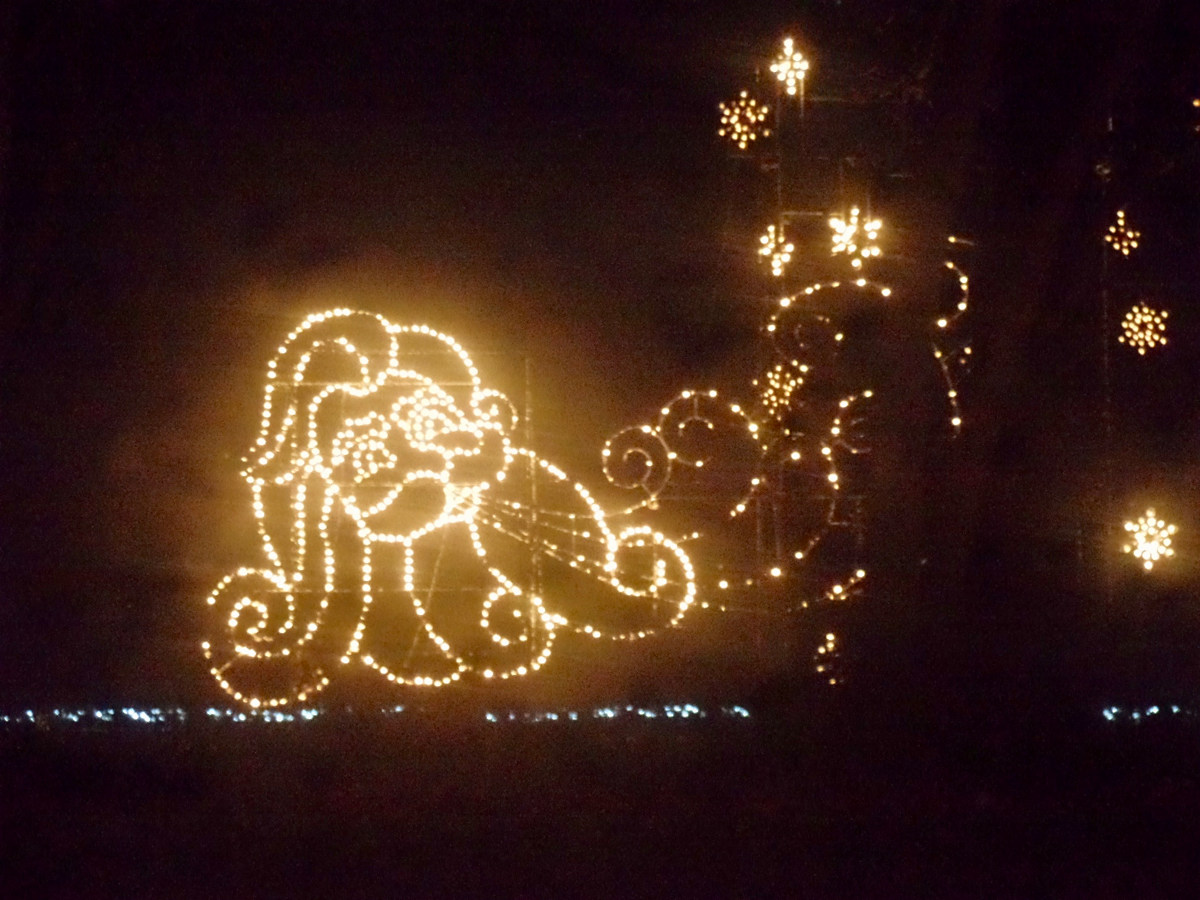 Old Man Winter animated sign; you can see some of the snowflakes he blows. 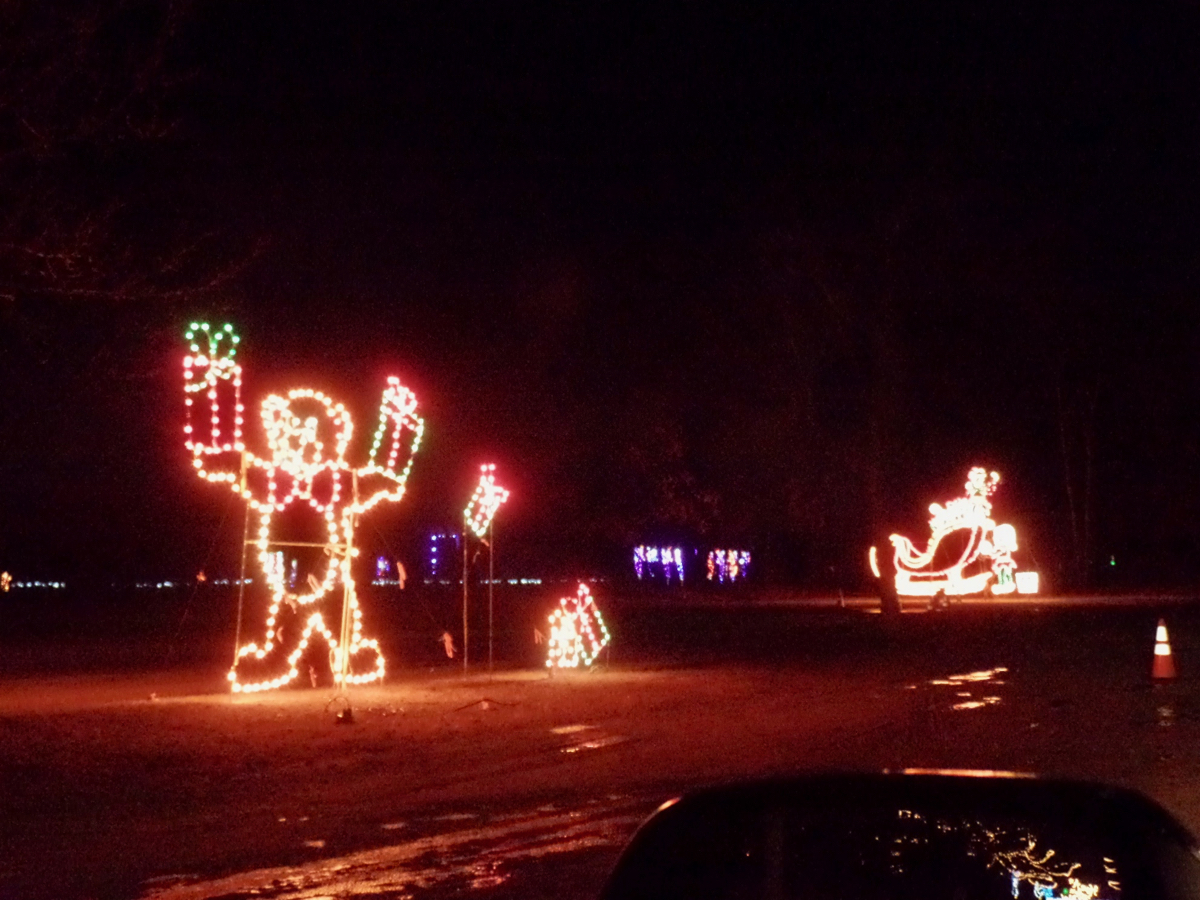 Teddy bear dropping some presents and in the distance an elf loading a sleigh. 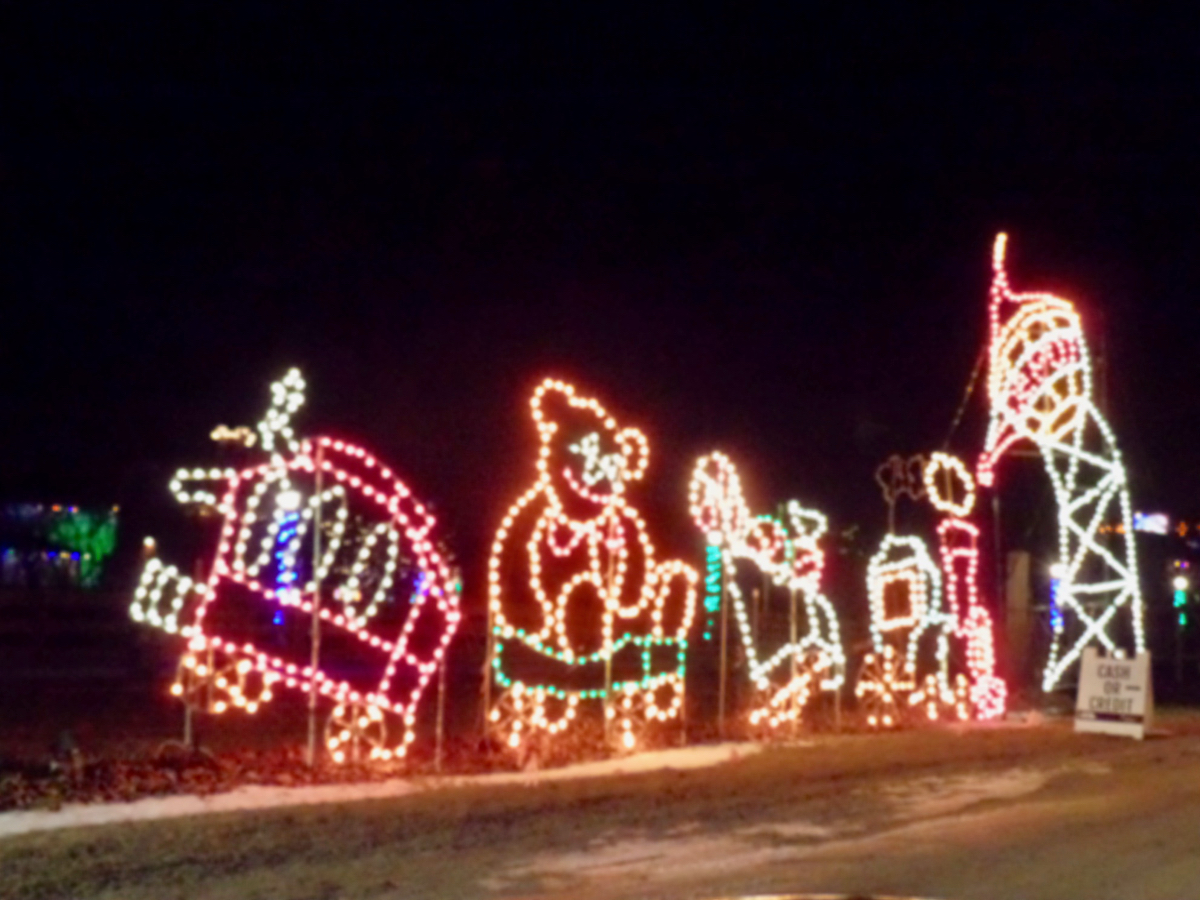 And a train watering up for its run. Here we come up to the payment booth. 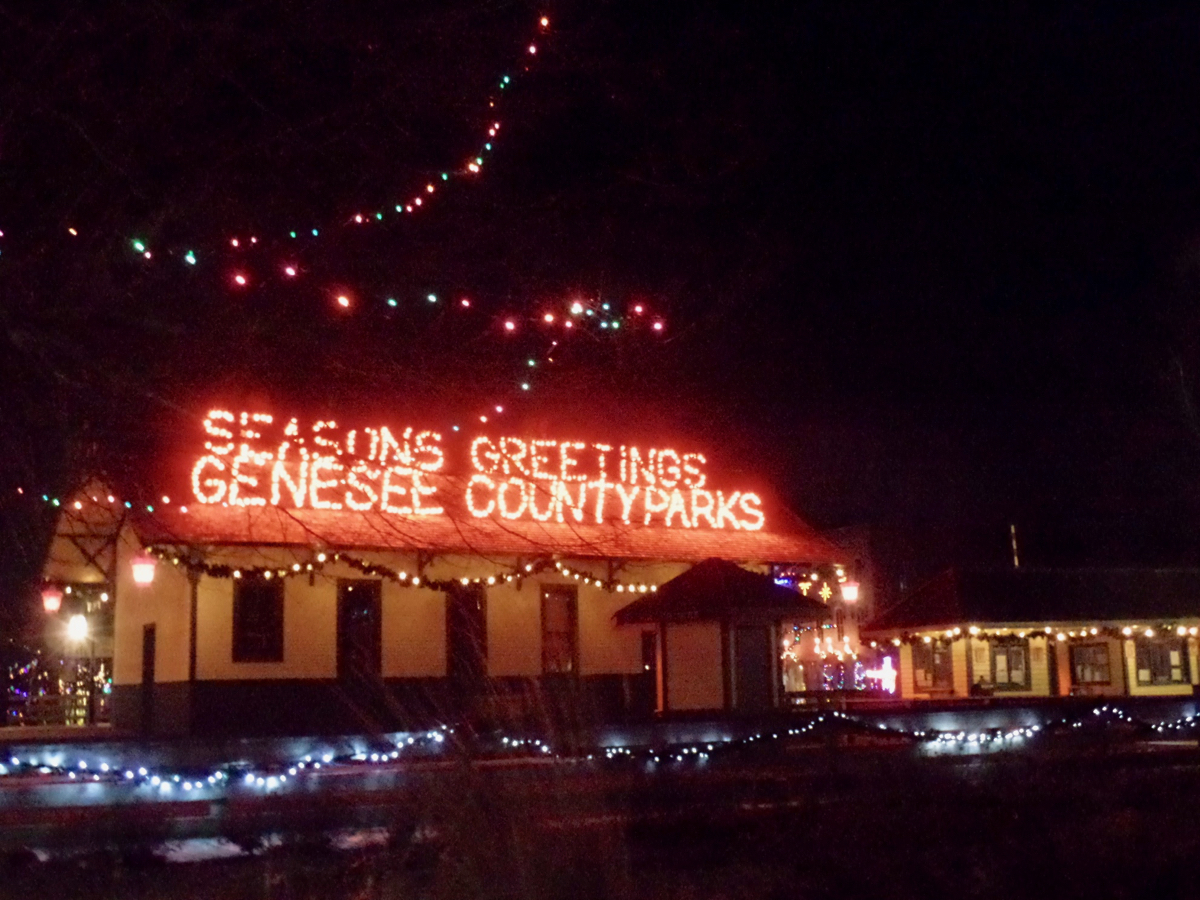 And finally the entrance! Or at least what's normally the entrance when we aren't confined to driving through Crossroads Village, outside Flint. (Even in normal times there are nights when only drive-through is available.

bunny_hugger and I haven't been there such a night, but she and her starter husband did that one year when they weren't aware of the schedule.) We always get there for at least one visit and they set up the town to be a drive-through exhibit to see the decorated buildings and the light shows. 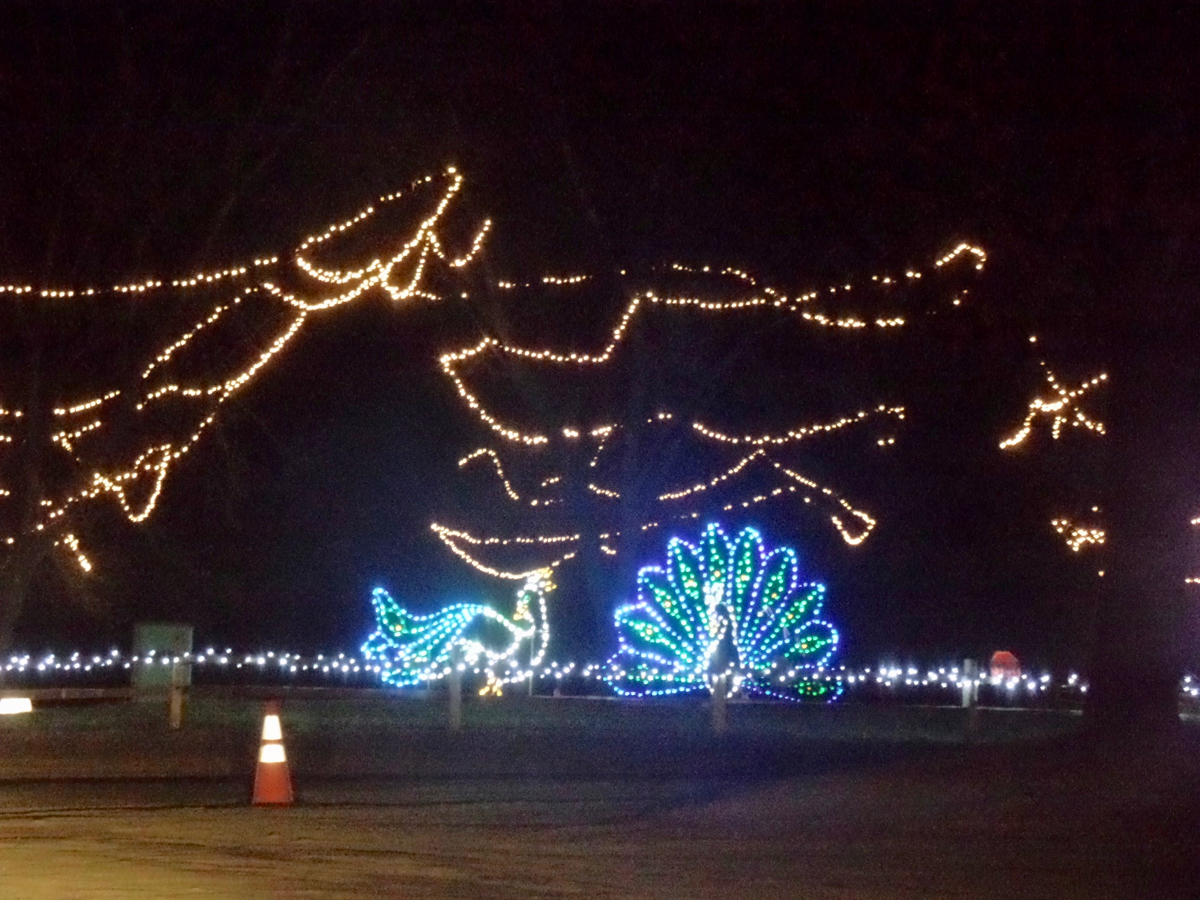 Peacocks on display in what's normally part of the parking lots and here is part of the runup to entering Crossroads Village. 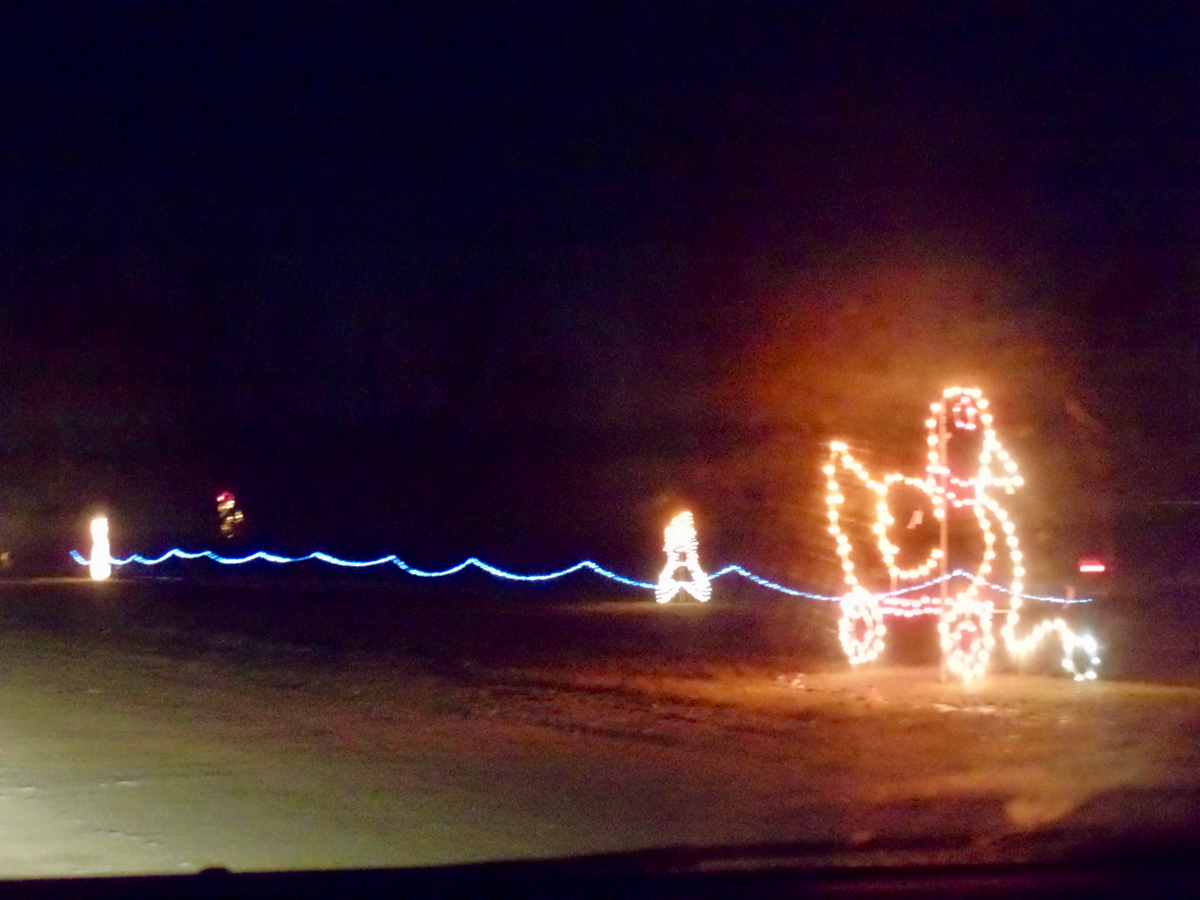 Toy duck on wheels and then things I can't identify beyond that. 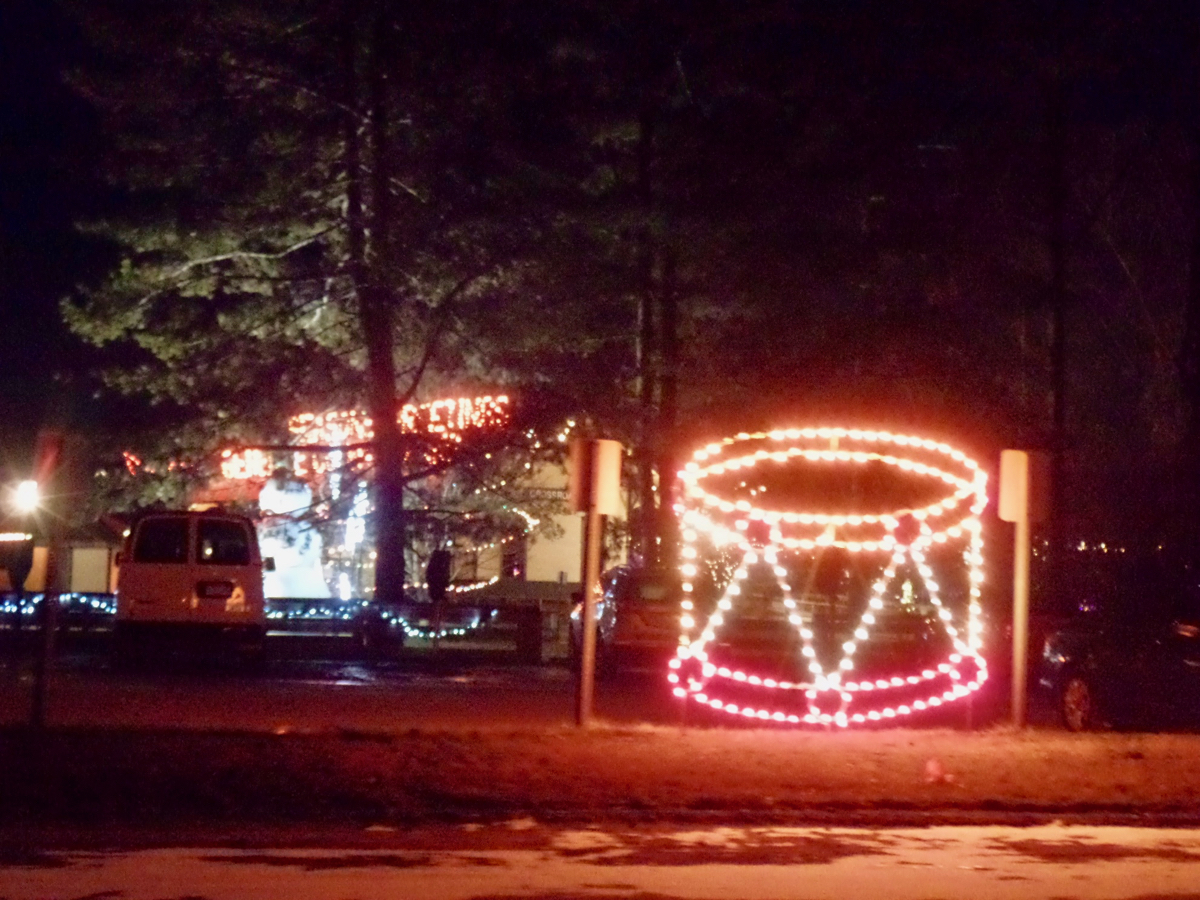 A drum and a view of the normal entrance to the village. 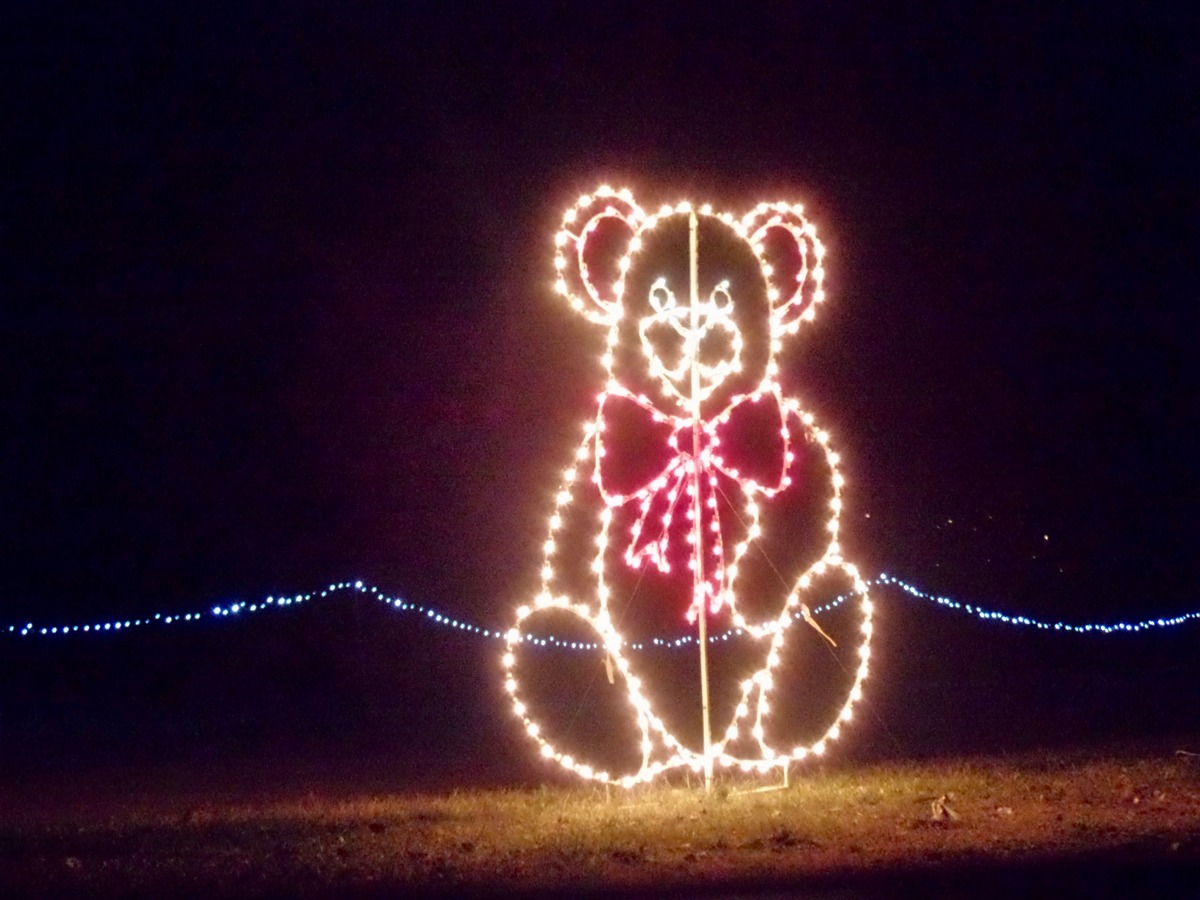 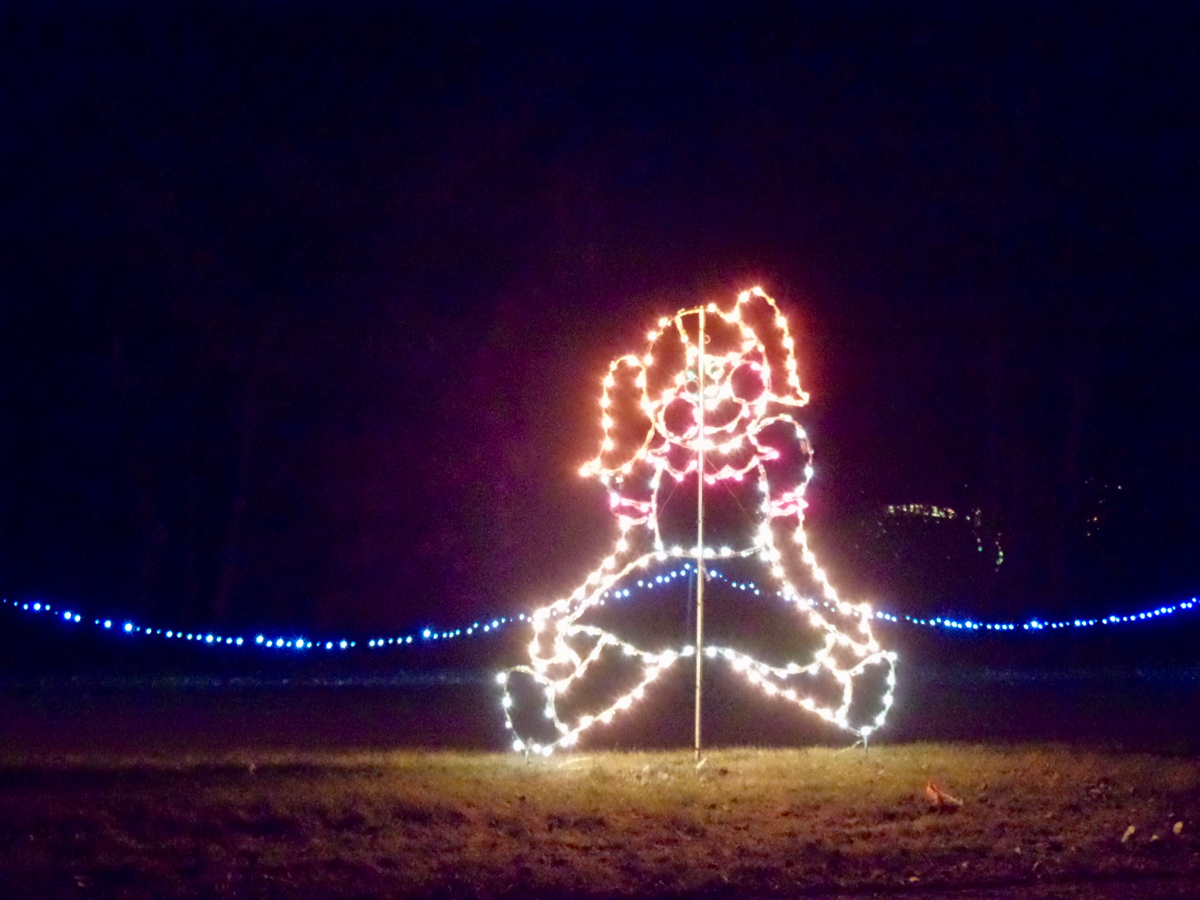 And a Raggedy Ann-style doll. 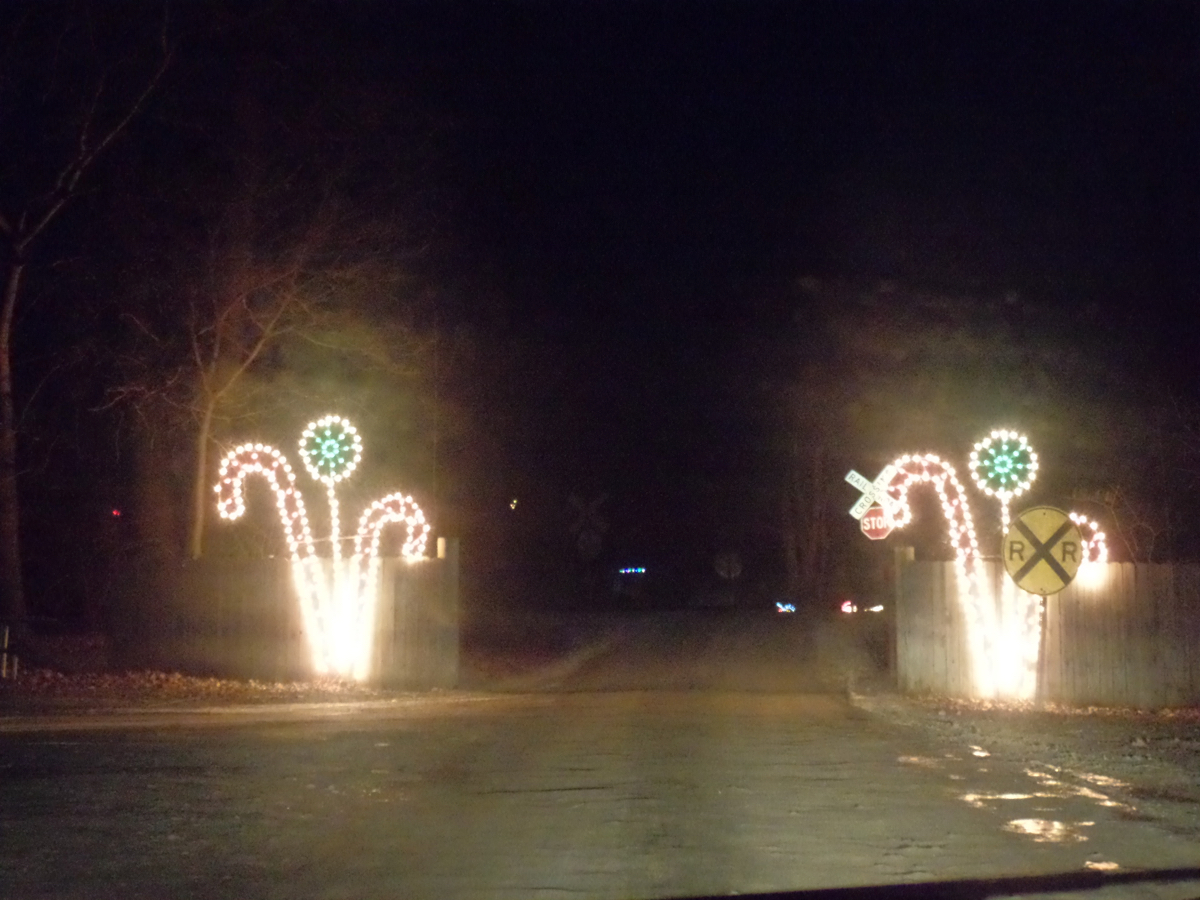 And here ... candycanes flanking the entrance to Crossroads Village! A path I've never seen before and probably never will again, as it seems to be normally a service entrance. The hill right ahead crosses the railroad track. 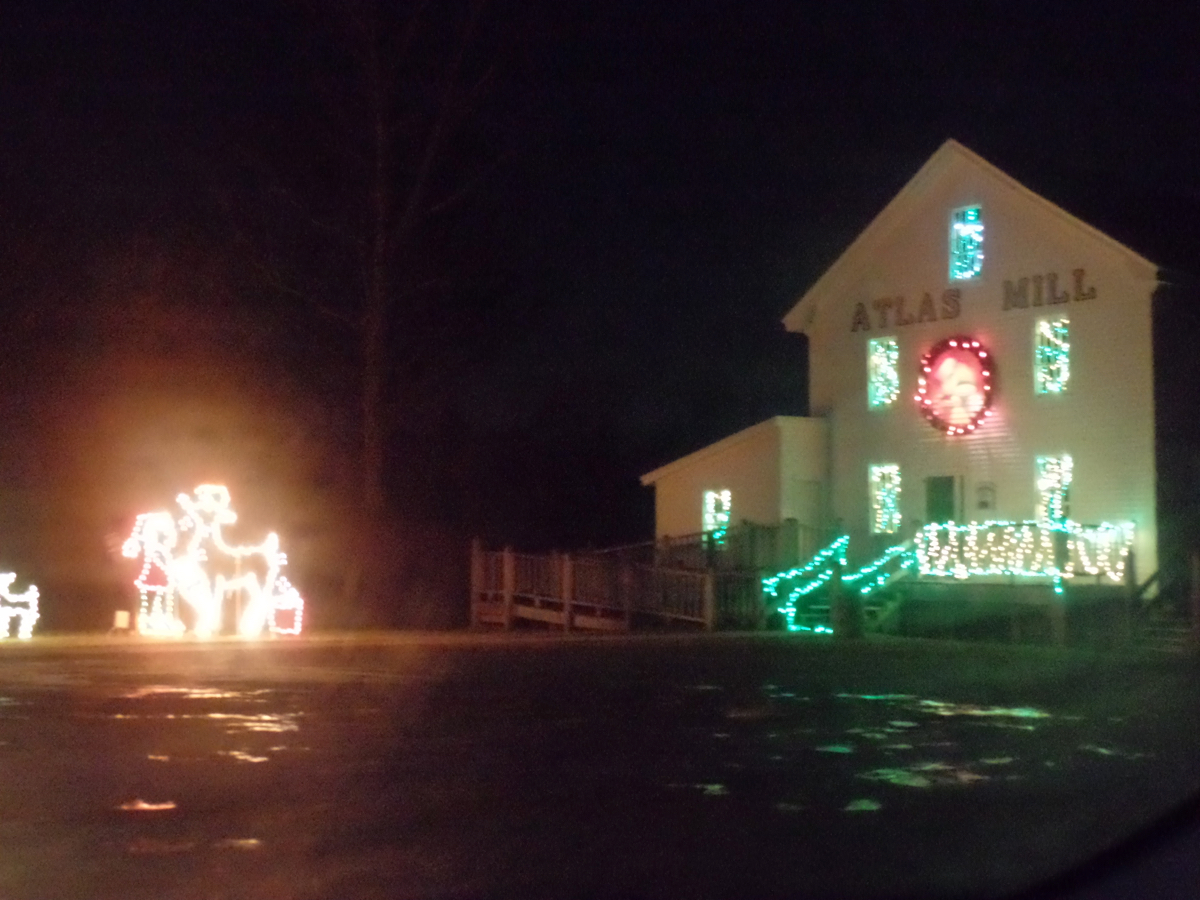 The Atlas Mill is a relocated but working mill and you can buy wheat that they've processed at the village. 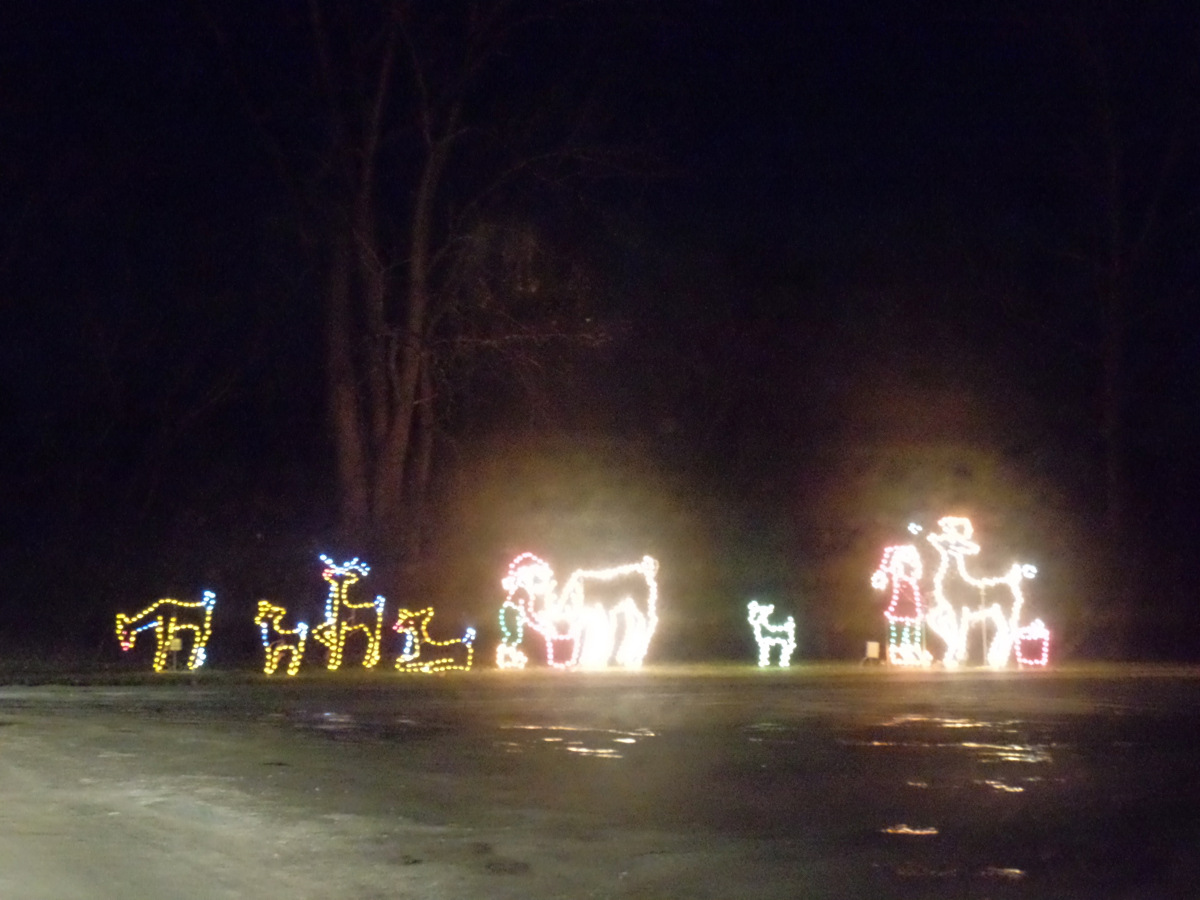 Some reindeer and the elves caring for them.

Trivia: The fourth month in the Ancient Egyptian calendar was Tybi. Source: Source: Mapping Time: The Calendar and its History, EG Richards. </p>