Motor City Fur[ry] Con has scheduled its 2021 convention and they're hoping to do it in person. They scheduled it for Columbo Day Weekend, subverting my expectations. I was figuring it would be set for Labor Day weekend, since that's when Pinball At The Zoo is hoping to run this year, and thus force us into an impossible decision. I suppose MCFC is saving Labor Day weekend for Anthrohio.

They've sent me e-mail asking if I still want to do the panels I'd signed up for. Trusting that it is responsible to have mass gatherings in October --- and I hope so but there are so many people working so hard to destroy that possibility --- I expect so. It'd be great to hold forth with a group of people literally younger than my character and getting them all to agree that raccoons are pretty great, all told.

The big shocker is that it's moving again, moving to a hotel in Ypsilanti. Or as the place bills itself, ``the Ann Arbor Marriot Ypsilanti at Eagle Crest'', which seems like a hilarious attempt to cover every possible base. I don't know if this is a one-year dislocation and if they go back to being a spring convention they'll move back to Livonia, or if this is just their new home. The new home seems to make it impossible for some reason for them to offer full meals in hospitality, but then their full meals were a bit skimpy for vegetarians. And the new location does make it easy to pop out to Pinball Pete's in Ann Arbor, or to the hipster bar scene in Ypsi, if there's some dead time during the convention. We'll see. 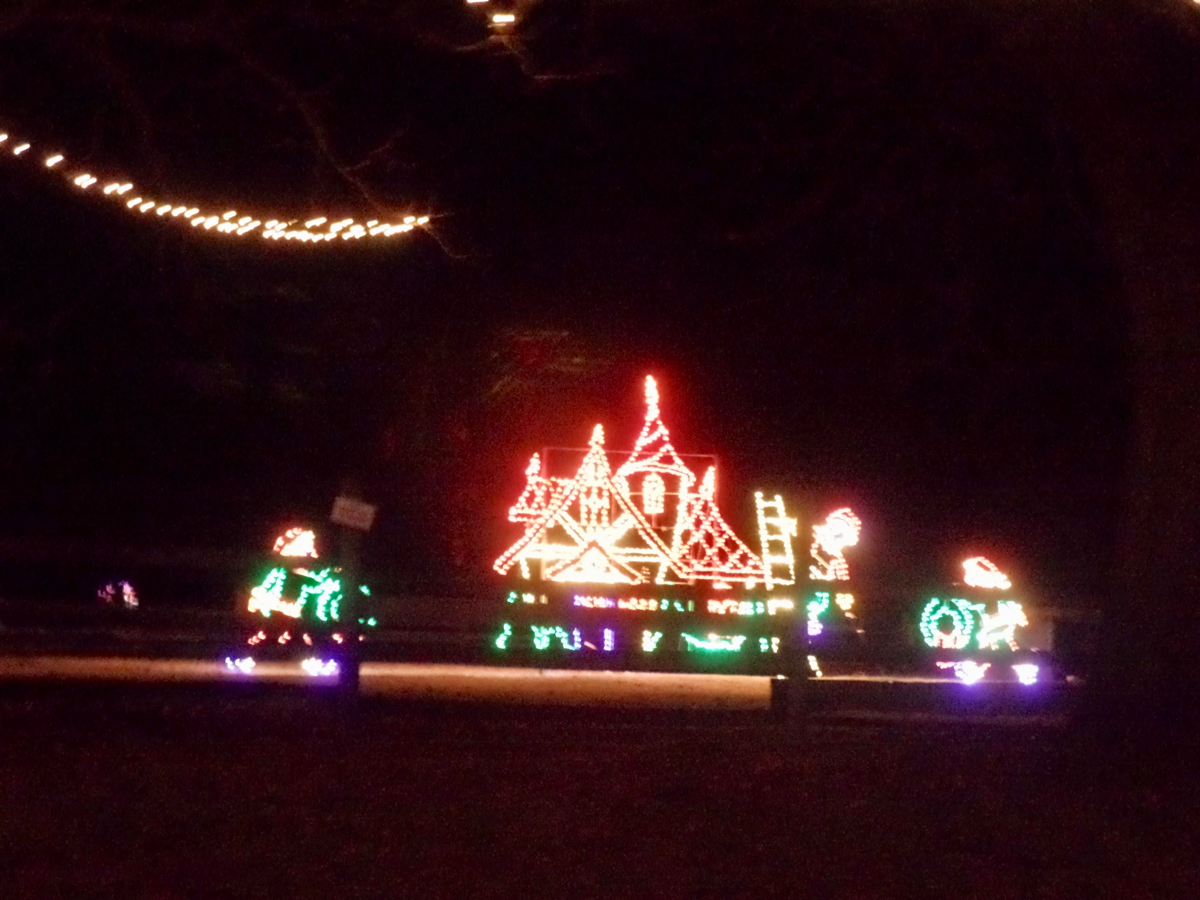 This looks like a North Pole-themed house and I don't remember it from past years. 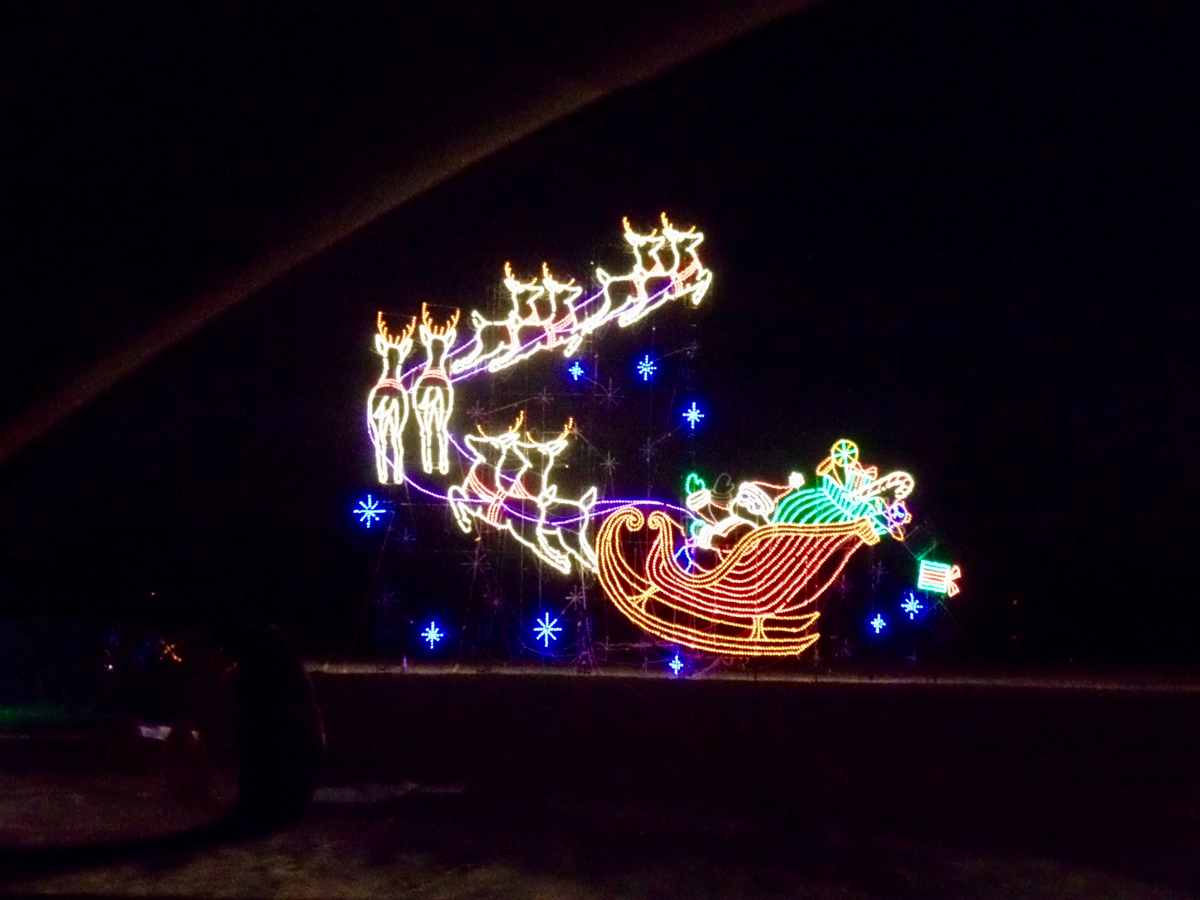 Santa waving as he takes off, and a package drops out of his sleigh. Always seen on the train ride. Here we're driving through normally-fenced-off parts of the park. 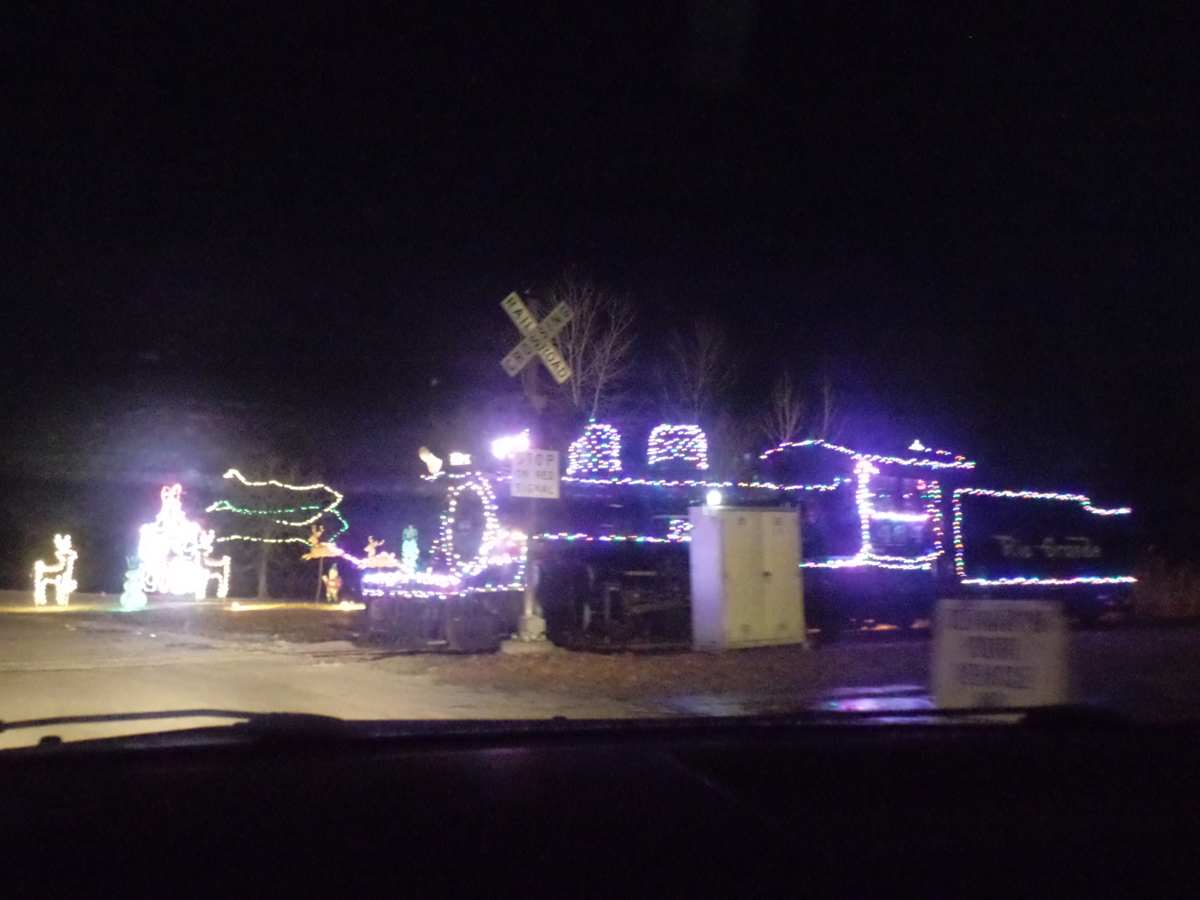 Train set up and decorated with lights so that you can feel unnerved driving across the tracks like that. 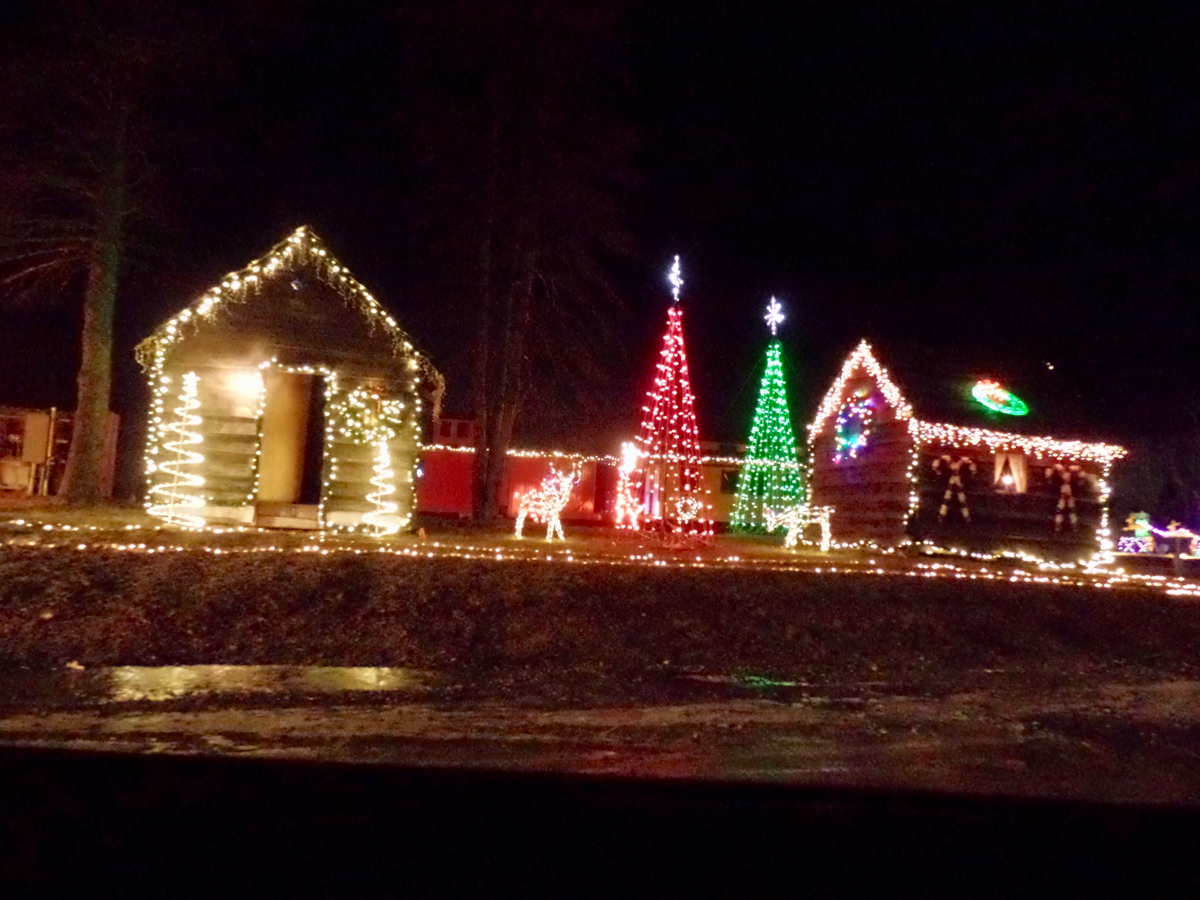 A couple of decorated buildings around the Twelve Days of Christmas. 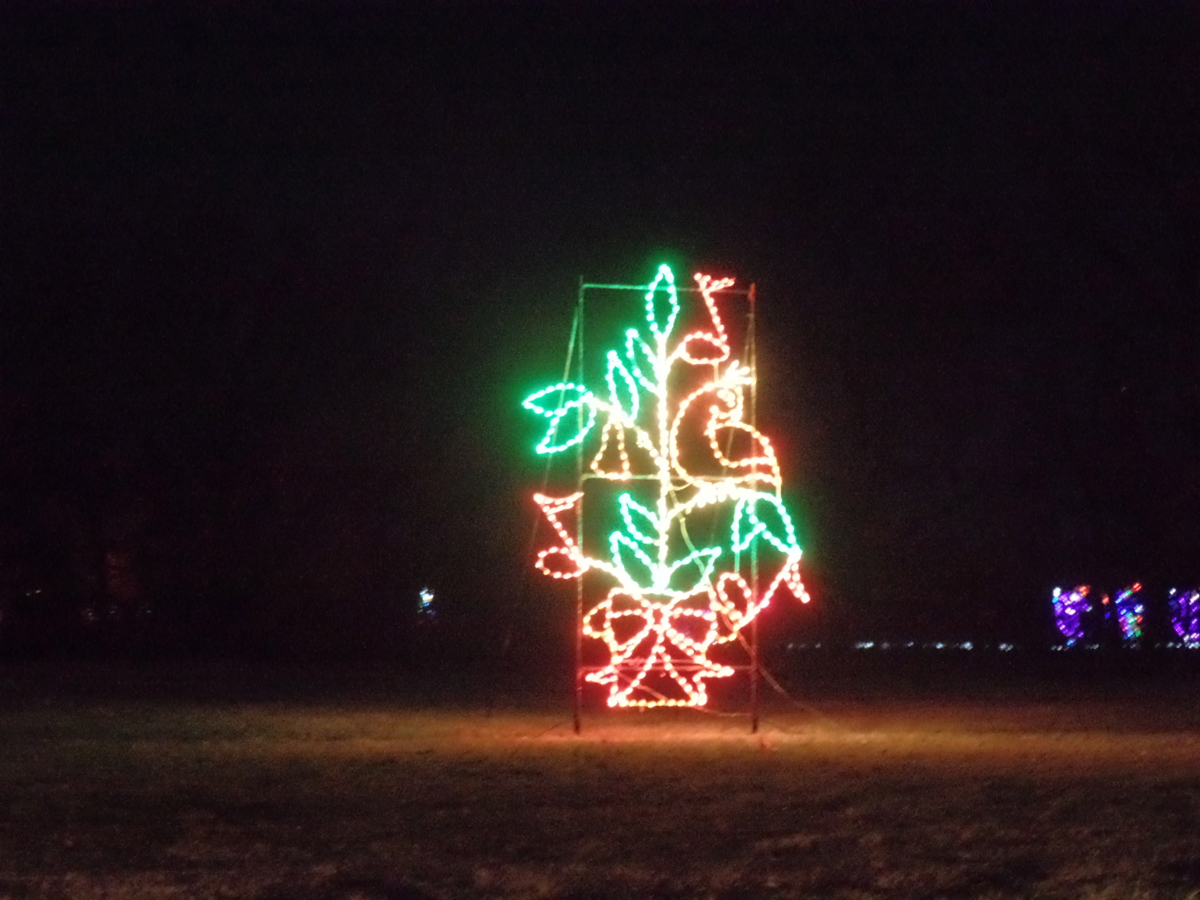 A partridge in a pear tree! The Twelve Days of Christmas were set up as the last major feature on the driving path and we realized this was finally our chance to get decent pictures of everything. 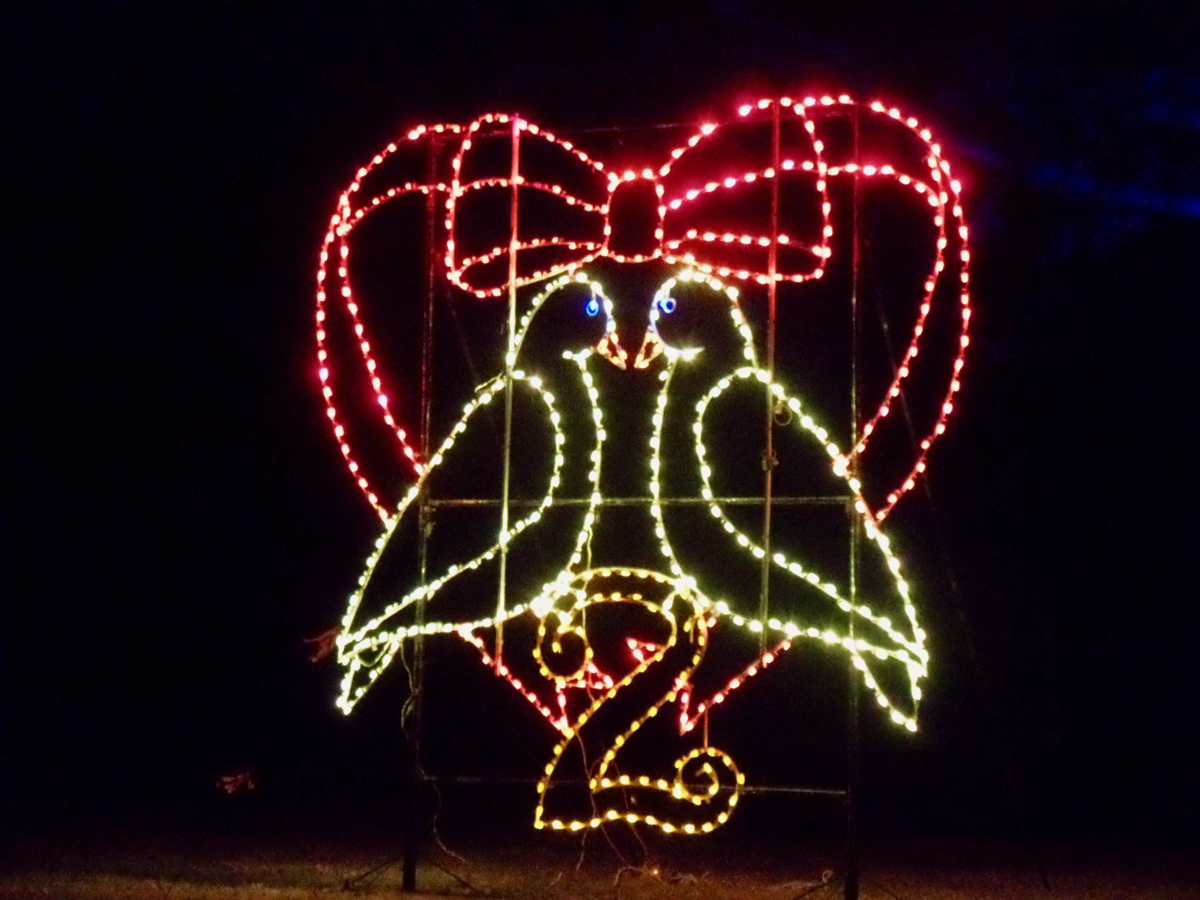 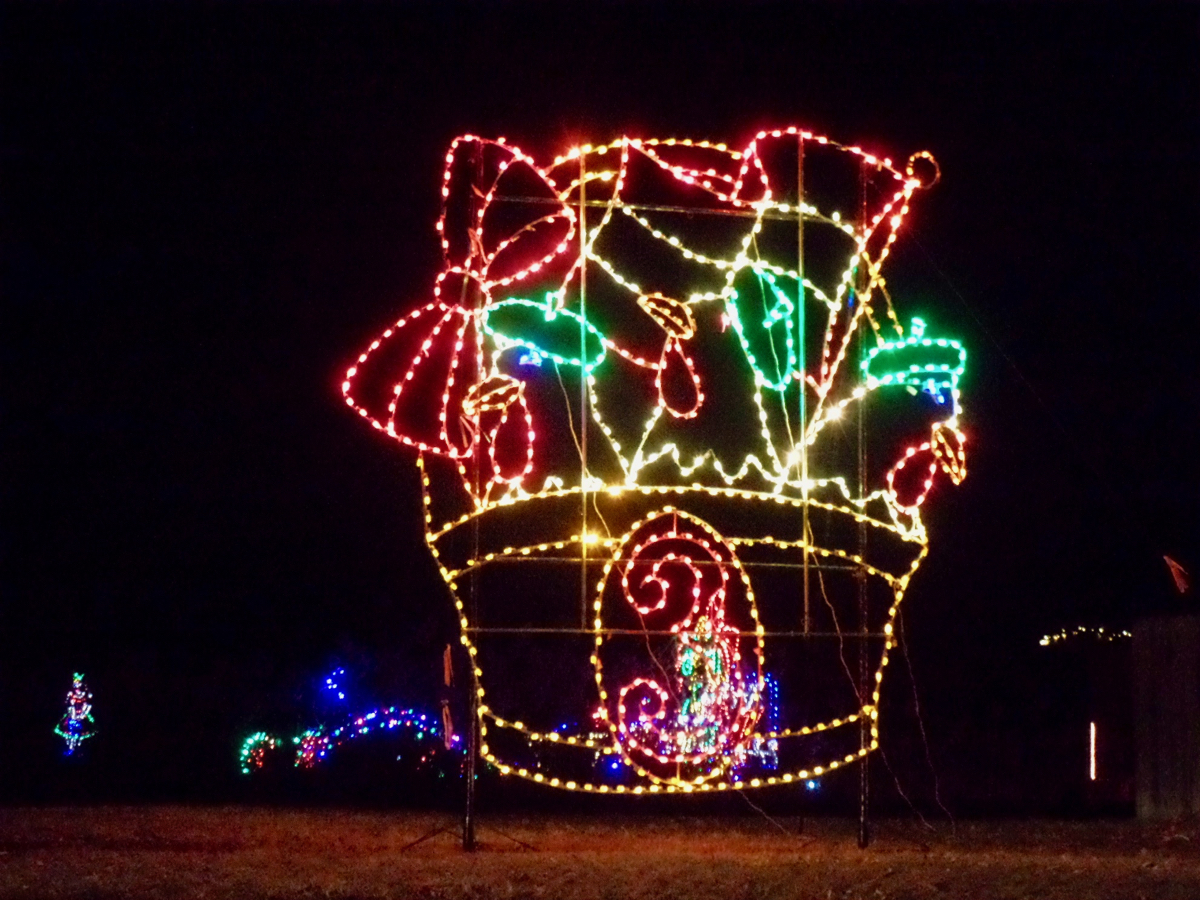 Three French Hens, and you see how they went and Frenched the hens up differently from how the Michigan International Speedway did it. 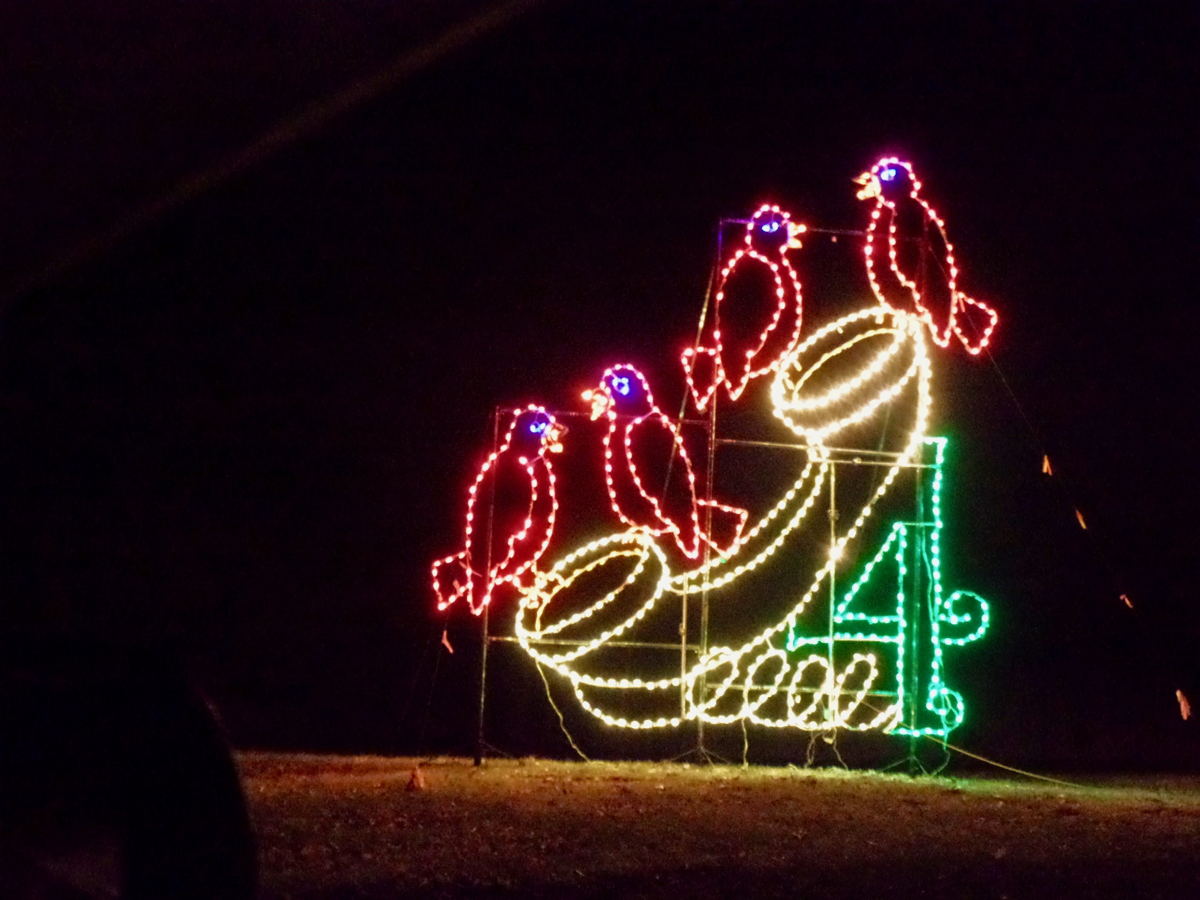 The four calling birds, arguably the silliest fixture of the Twelve Days. 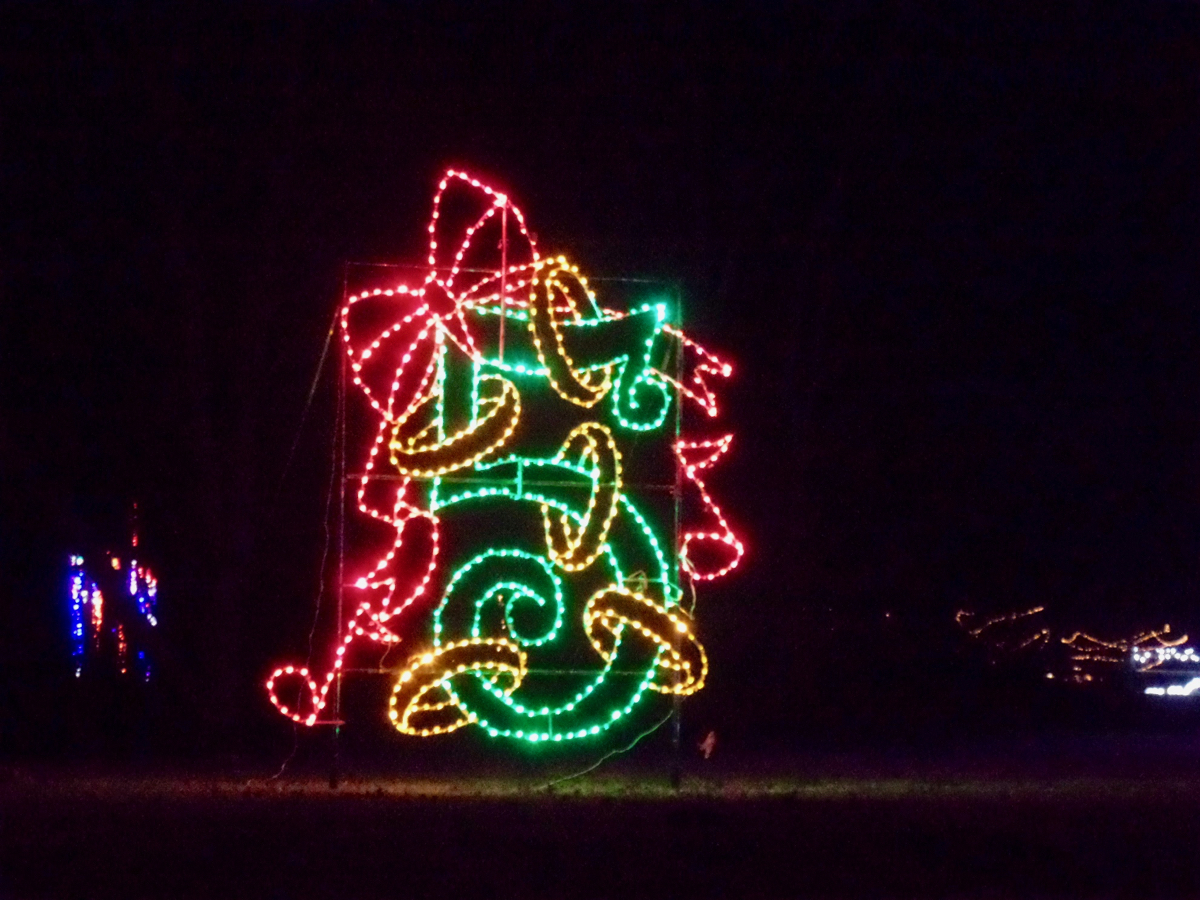 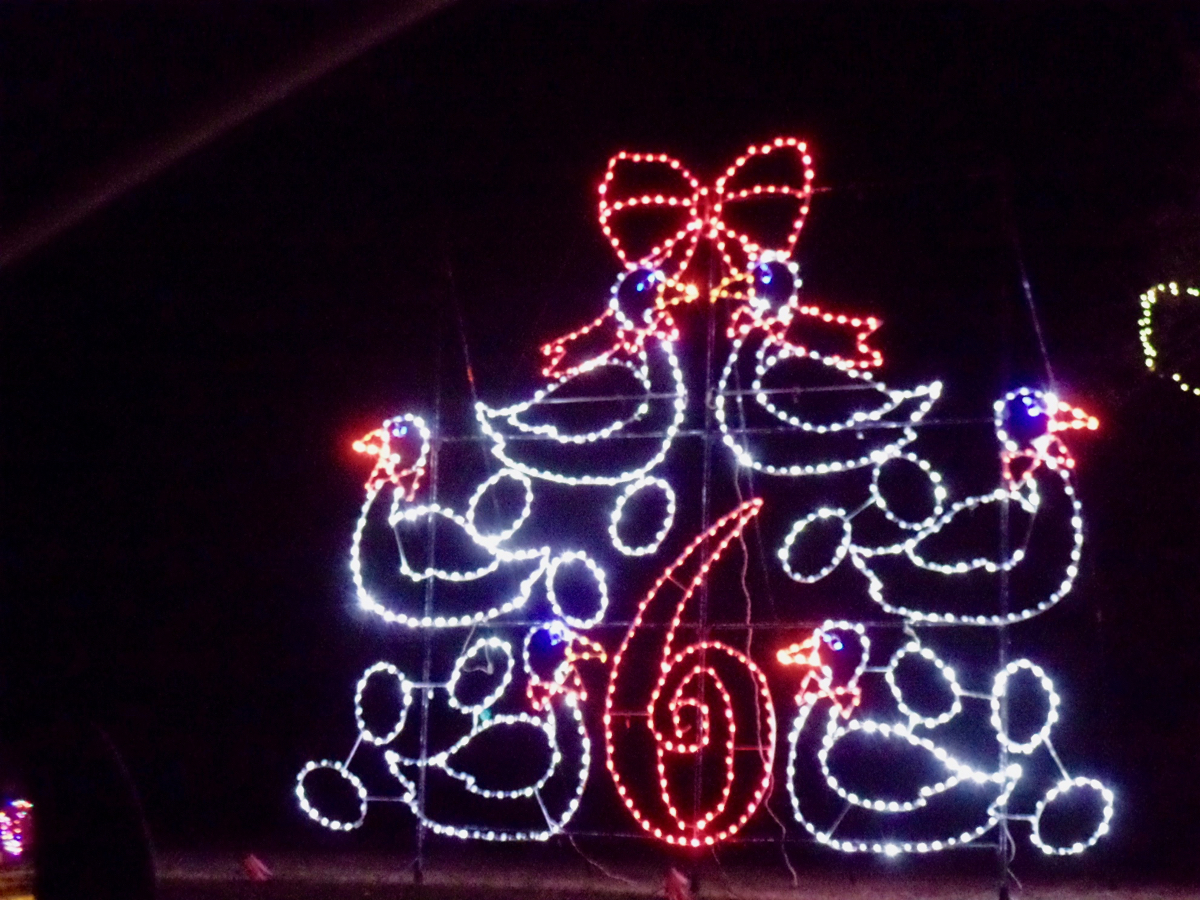 The six geese at work here. 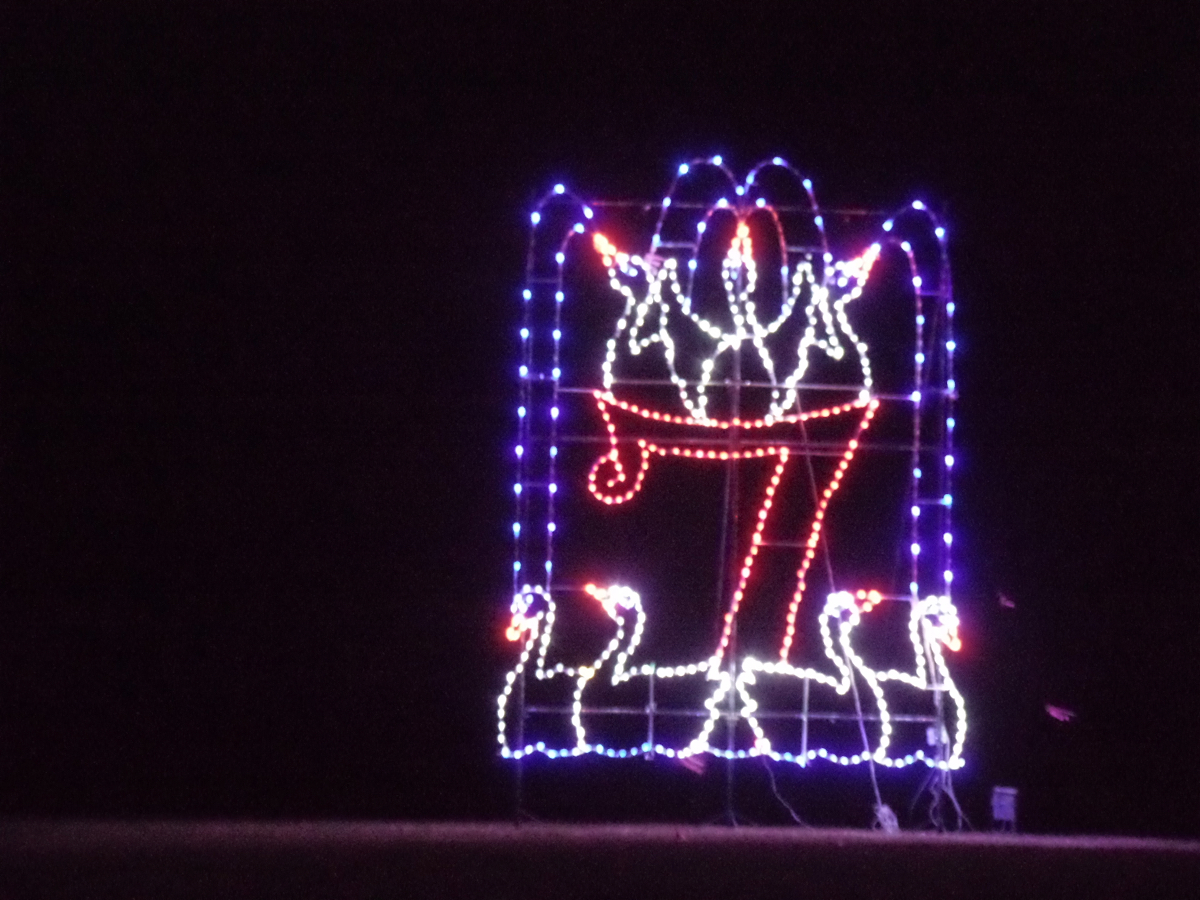 And then the seven swans with their swimming, or at least being a fountain. 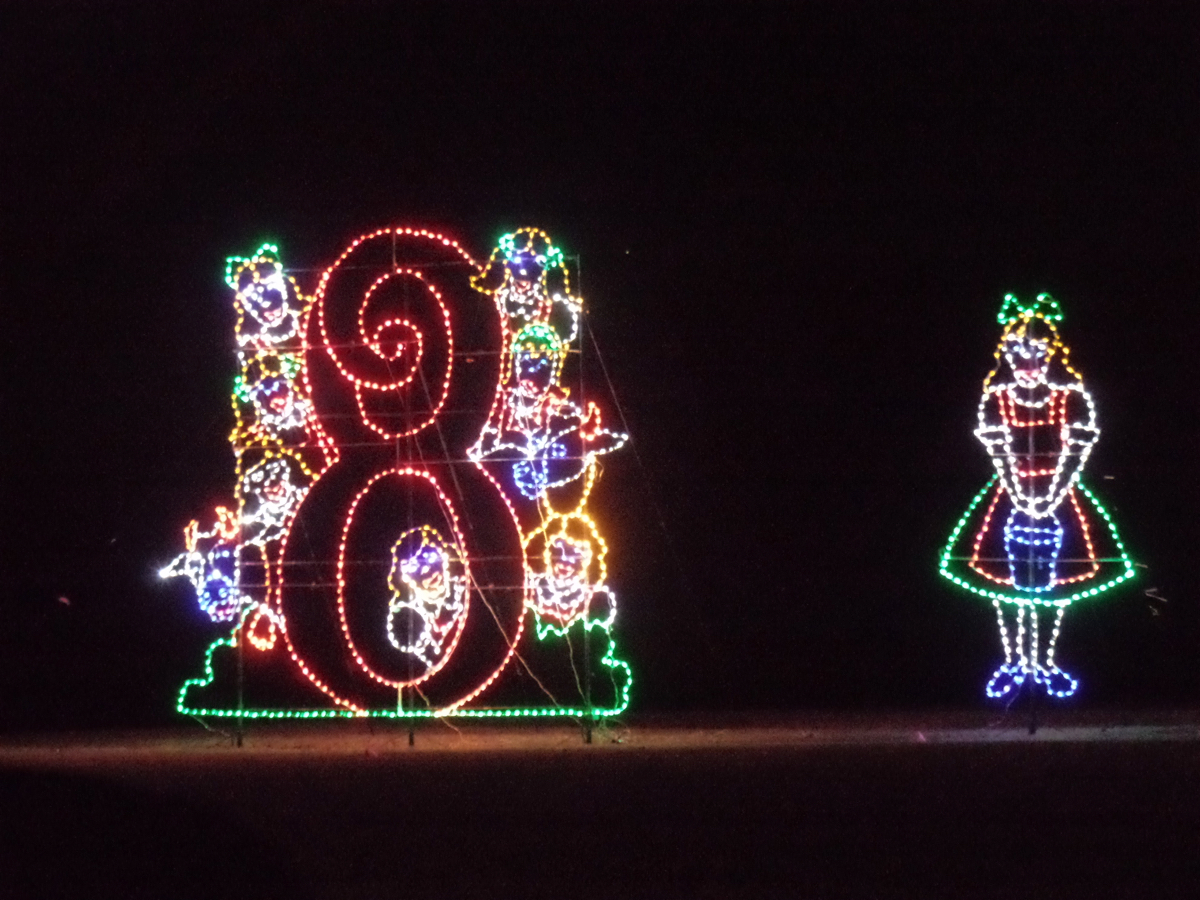 Trivia: American factories made 40,000 tons of barbed wire by 1880, seven years after its invention. Source: Down To Earth: Nature's Role in American History, Ted Steinberg.