The existential threat is bulletproof and looming large

bunny_hugger ordered a replacement lens cap for her big camera. Two, in fact, so next time she loses one she doesn't go capless a while. Monday morning we found one in a package dropped between the screen and real door. The cap, a small plastic wedge, was put inside a cardboard wrapper envelope that was, without exaggeration, about 11 by 14. That is, with exaggeration, approximately 2,038 times as capacious as it needed to be. Oh also, it was one cap, not two.

bunny_hugger investigated and found that no, she had ordered two, but that the store apparently had only the one on stock and sent that, waiting for the second to come in off back-order.

Later on Monday, with the regular mail delivery, was another enormous cardboard-envelope package, although this one was folded in half so it fit in the mailbox. And yes, inside this other 11-by-14 envelope was the other lens cap which, again, is a thing maybe one and a half inches in diameter and not one-quarter of an inch in height. There is nothing about all this which is not mysterious and a bit funny.

In the story comics, have you wondered What's Going On In Mark Trail? What makes crickets ``land shrimp''? January - May 2021 explains everything you want to know. Yes, it involves the people who think they're going to get Westerners to eat insects in place of beef. These people are a part of nature's rich tapestry, and basically harmless, like people who think fusion power will someday be a source of energy. Cherish them.

And here's the end of our Crossroads Village expedition for 2020, with the conclusion of the Twelve Days of Christmas. 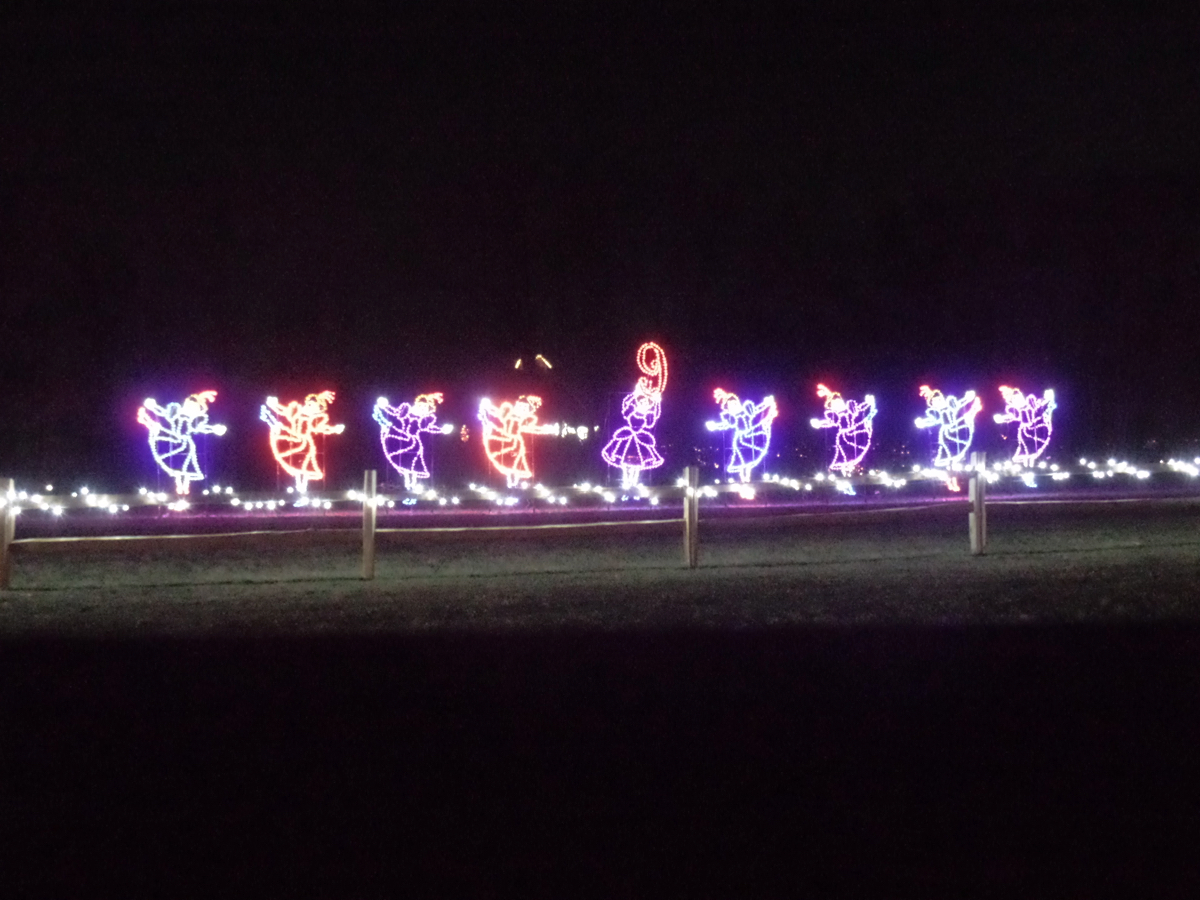 And here's the nine ladies dancing. Here we were fed into a parking lot and fixtures were on opposite sides, so we had to be pretty far from some things. 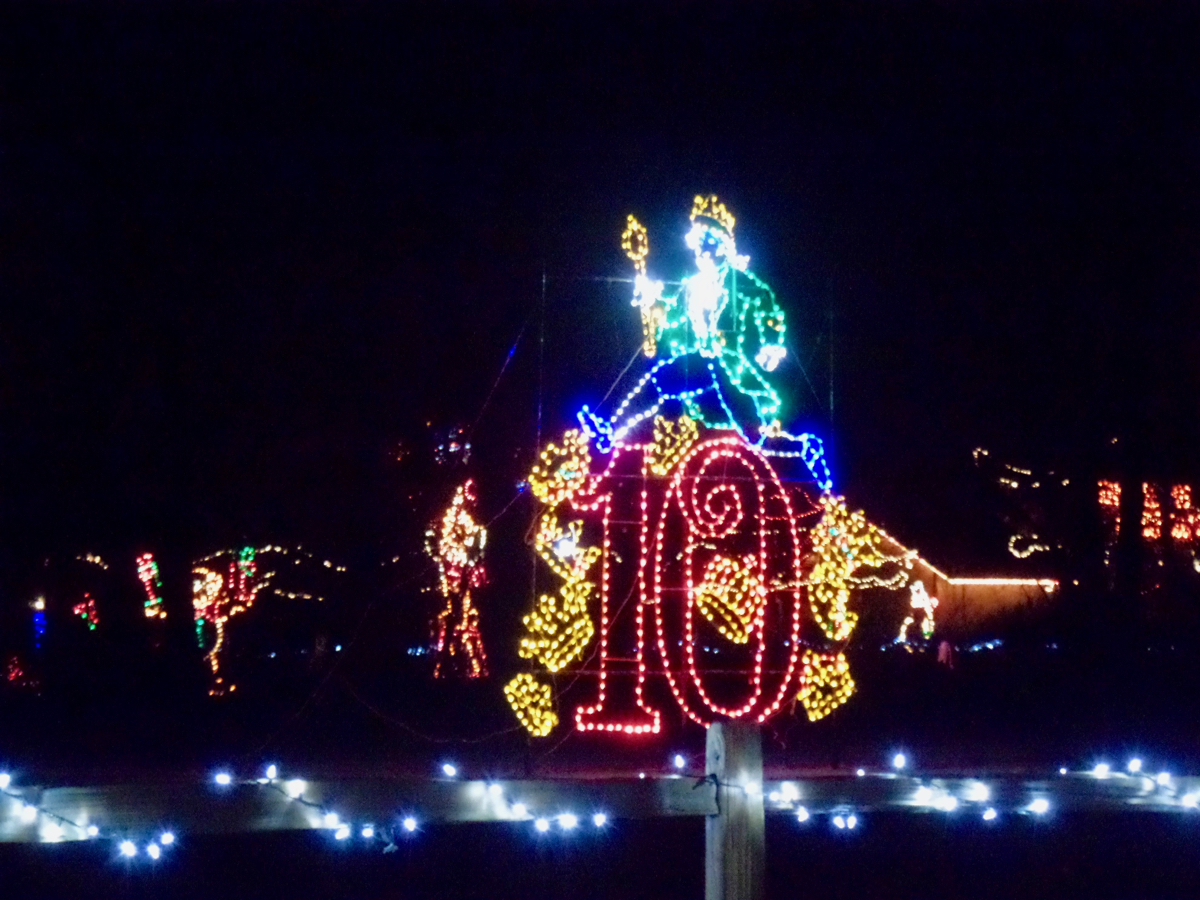 And here's the ten lords a'leaping, or at least one lord who's apparently got a lot of crowns. 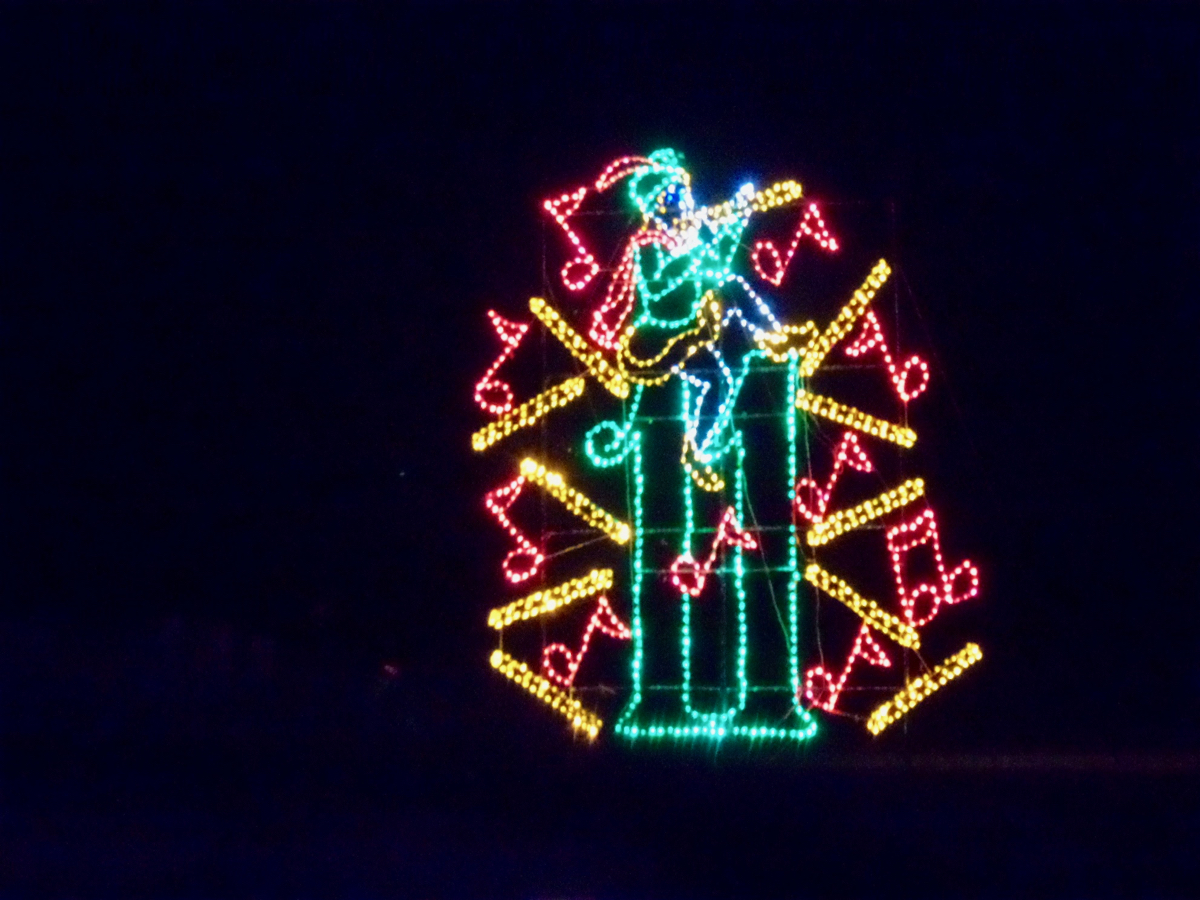 One piper with eleven pipes. 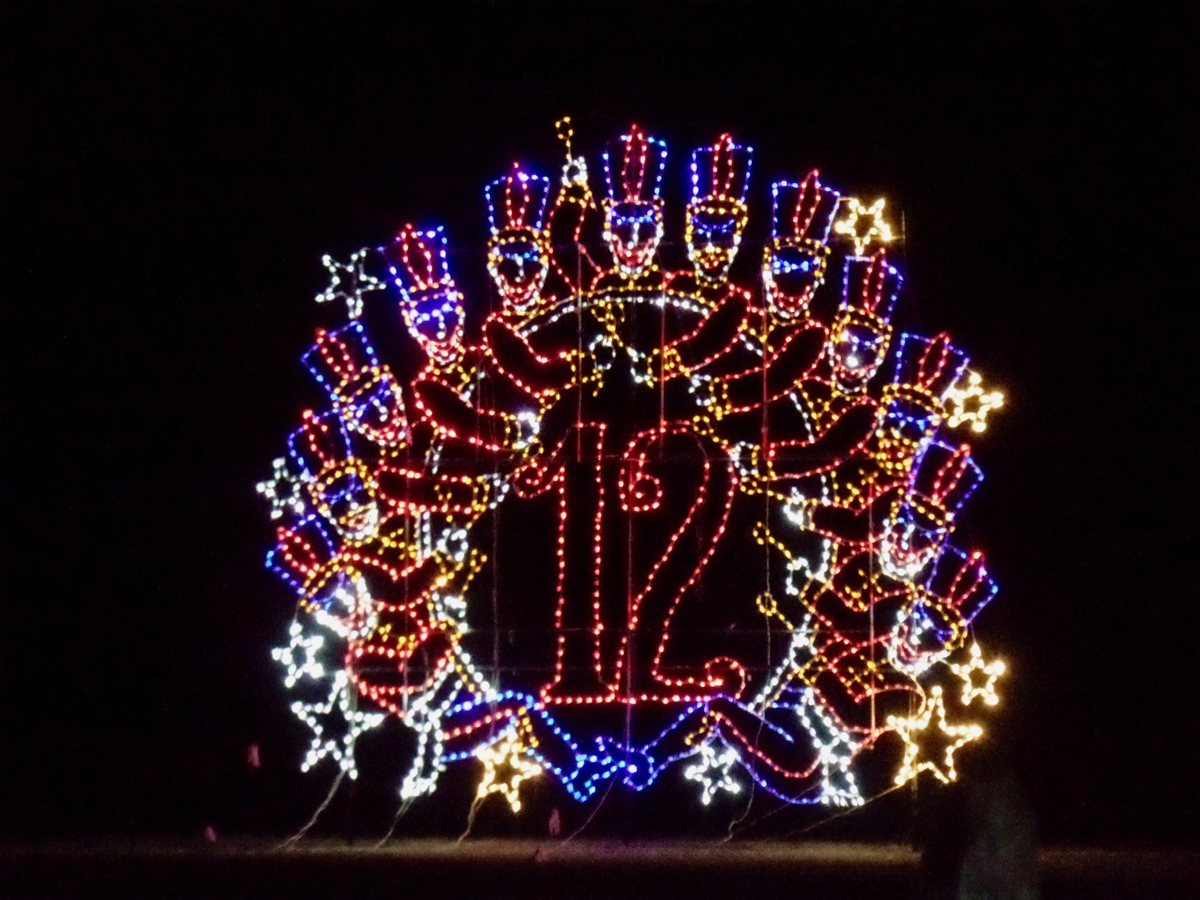 And your twelve drummers, closing out the carol. 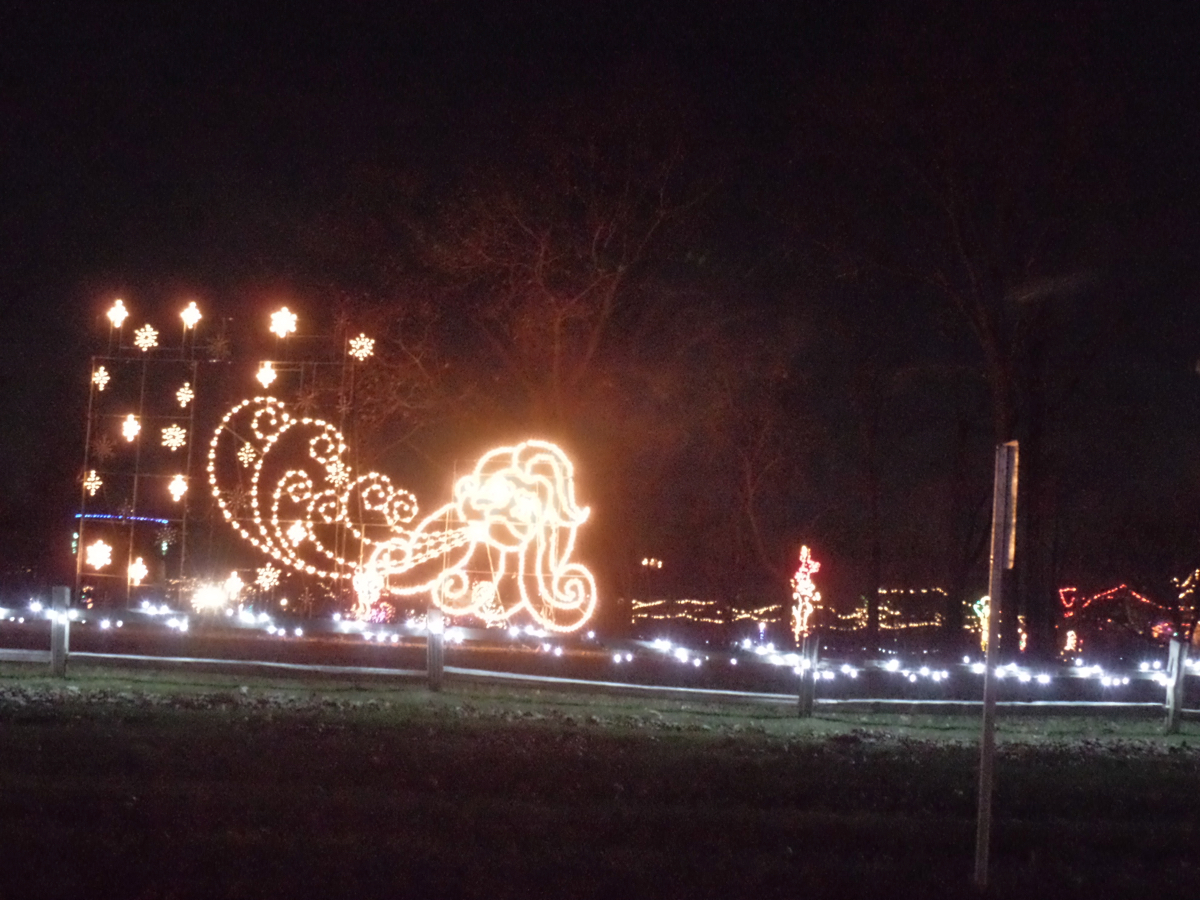 Old Man Winter seen from the other side. 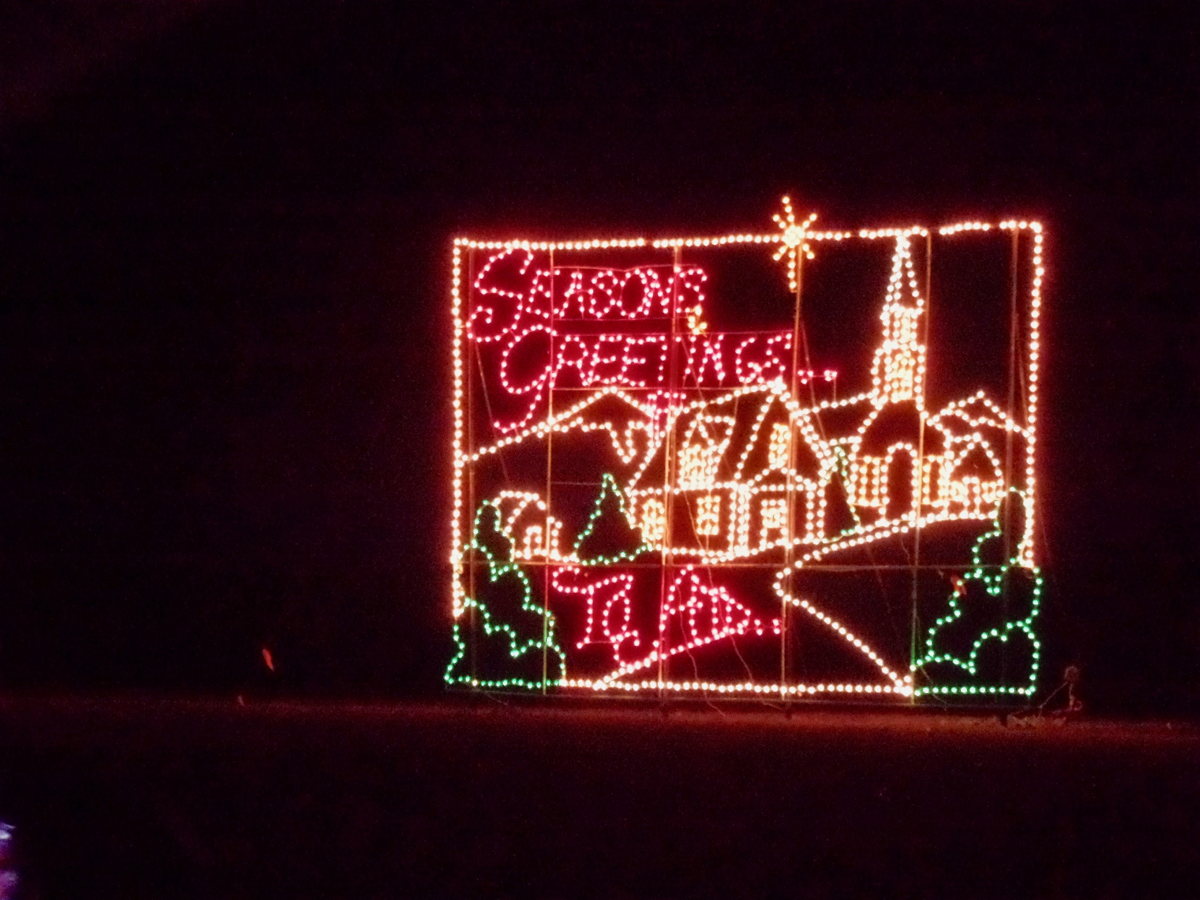 Season's Greetings, another of the fixtures normally seen on the train ride. 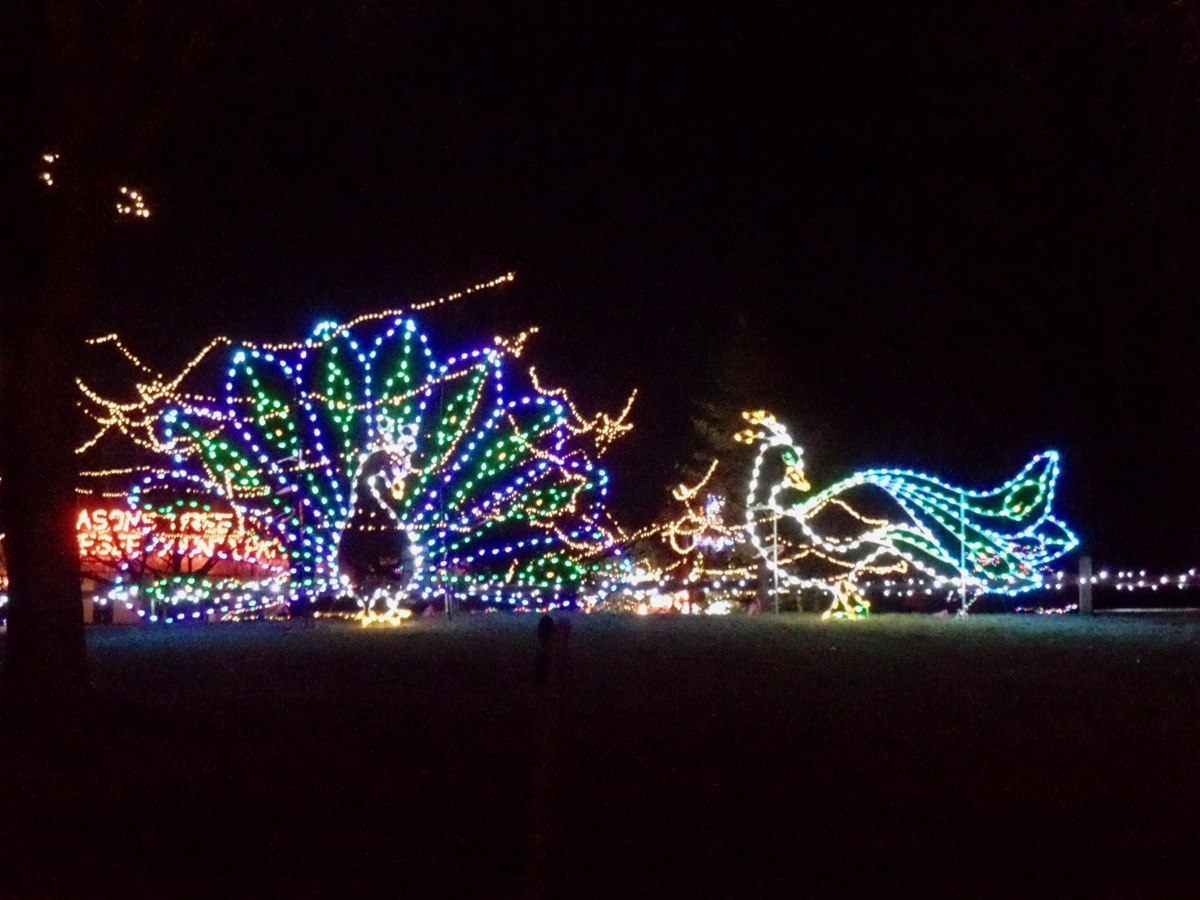 And the peacocks, last seen at the start of the night. 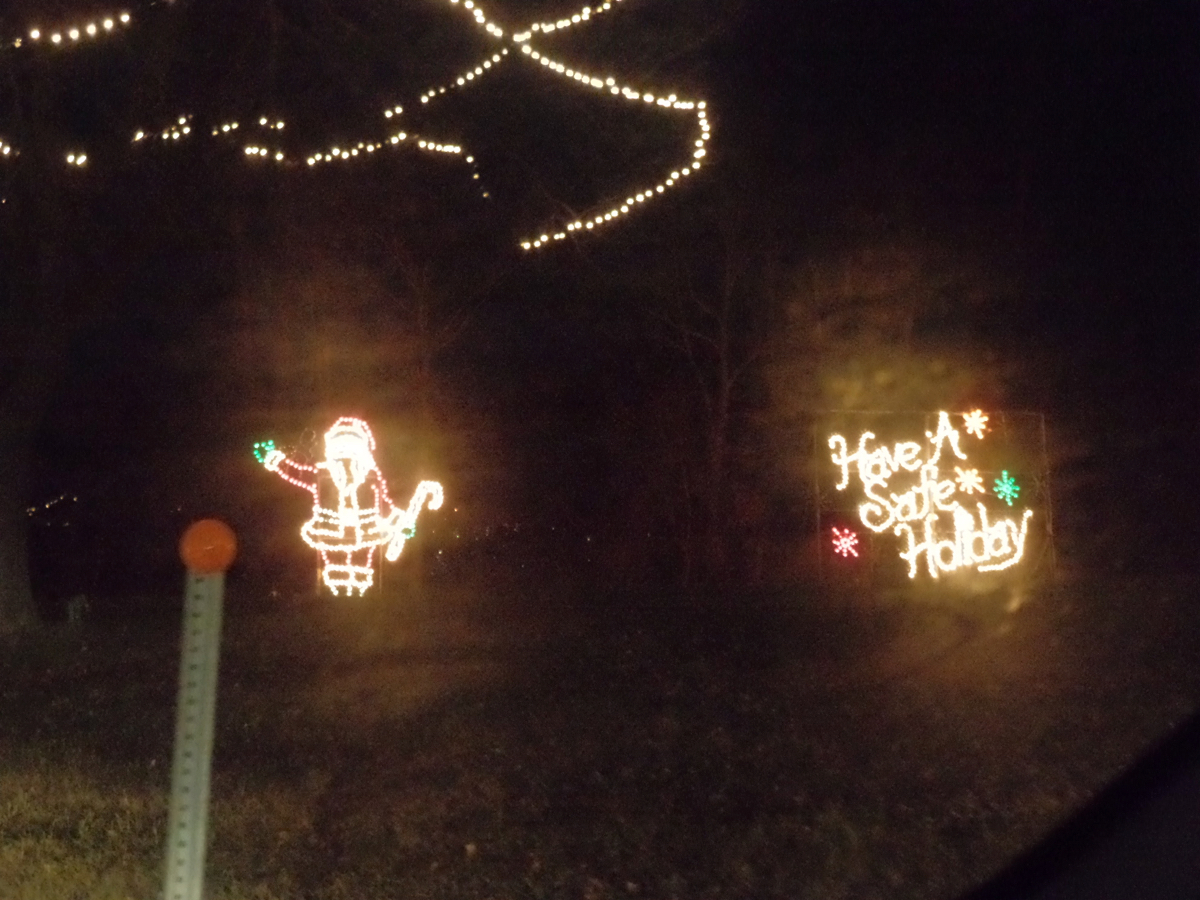 Santa and wishes for safety as we drive out of the park. 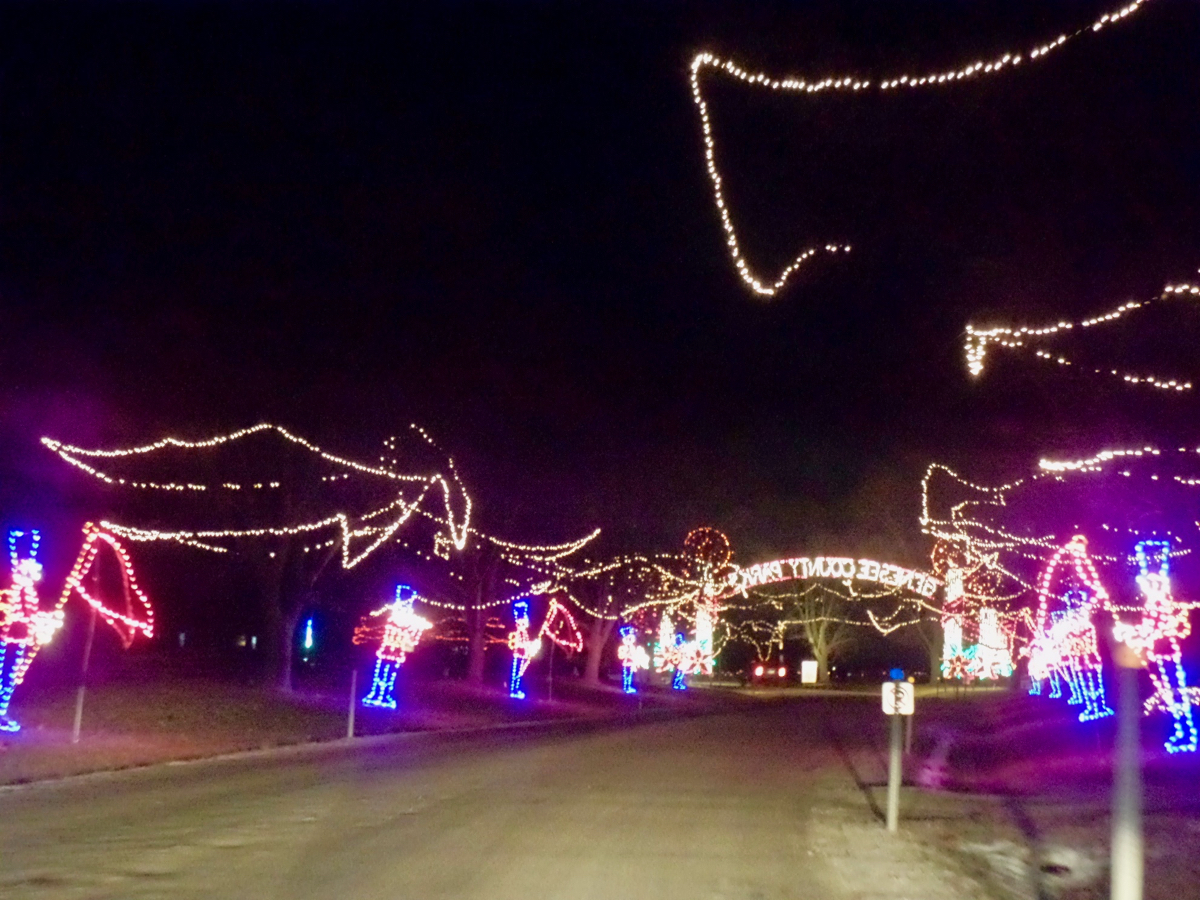 The entrance and exit to the main road. 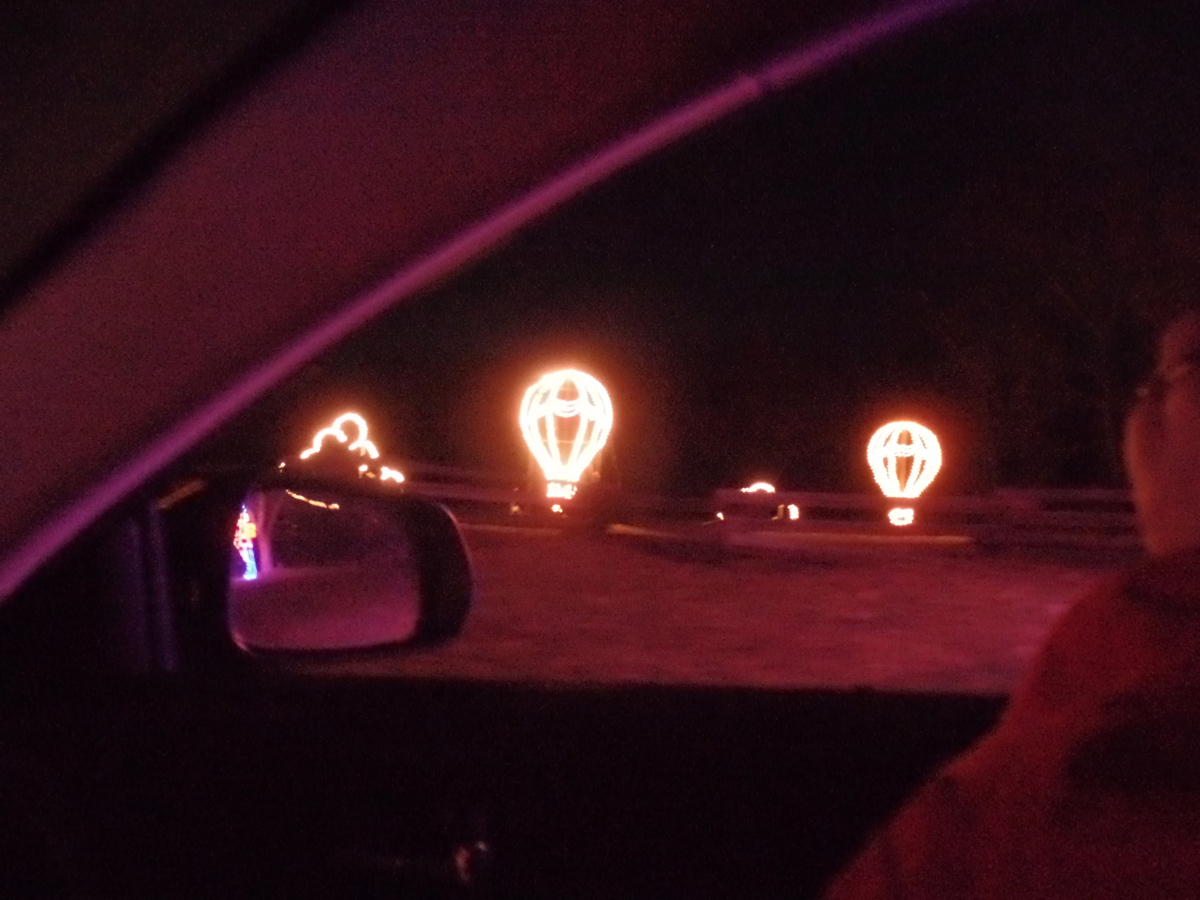 Couple of hot air balloons, normally seen during the final turnaround of the train ride. 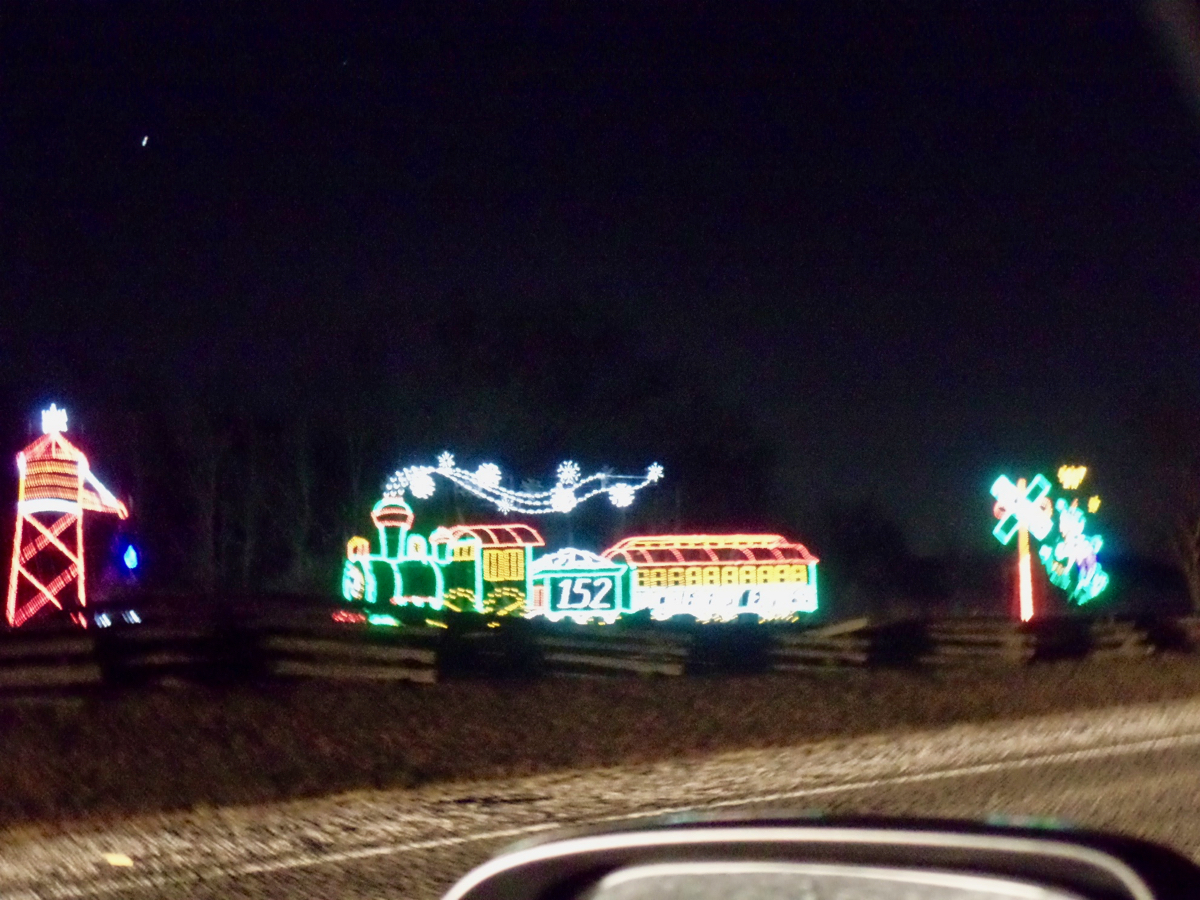 And here we're back on the main road outside of the park. The train fixture is put up as representing their historic train. 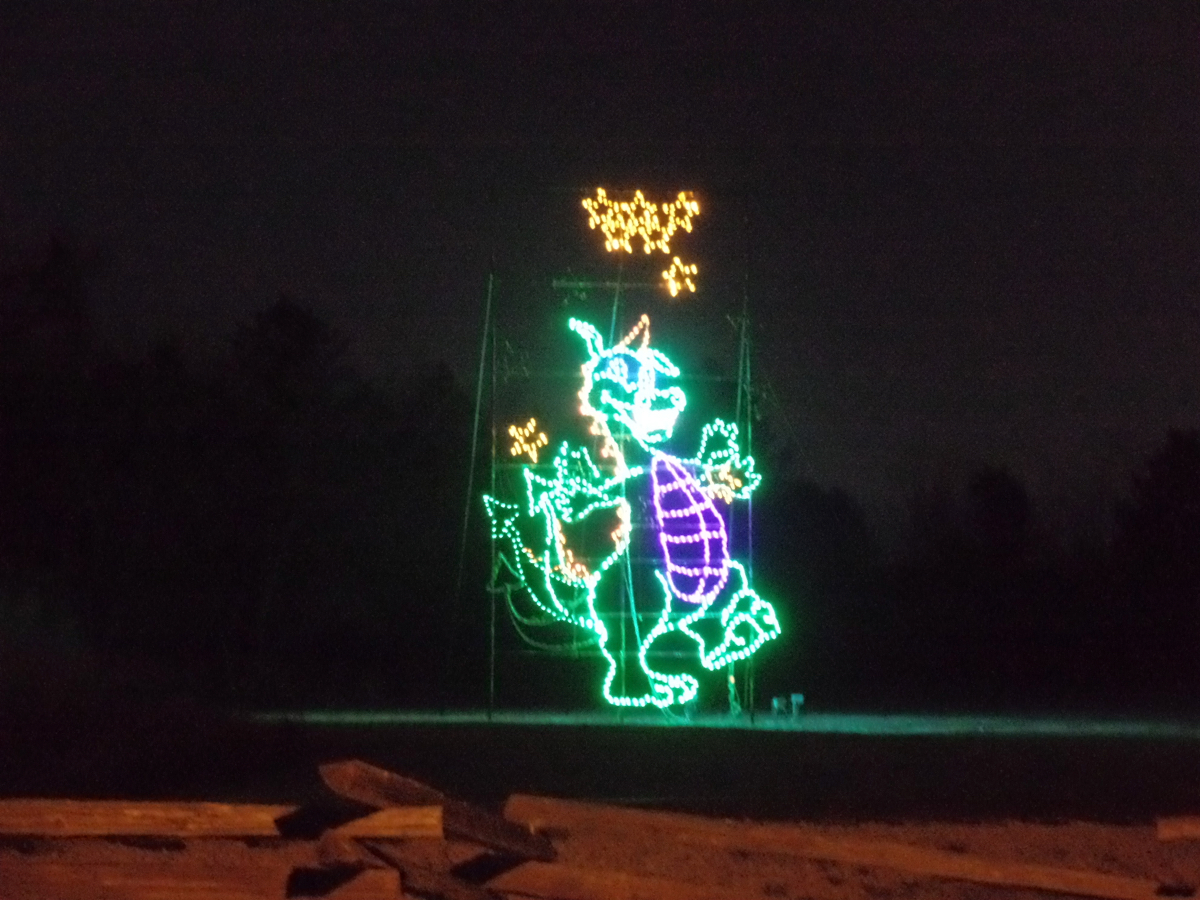 And the Christmas Dragon! He juggles stars. As the train spiel explained the fixture was bought for Halloween and arrived late and so got promoted to the bigger holiday.