AnthrOhio 2021 is off. They announced it earlier this week. I'm relieved, since even before the CDC decided we should have yet another infection wave this week I wasn't sure I was up to deciding about another convention. I'm sorry not to have the reason to go to Columbus and maybe spin this out to trips to the Columbus Zoo and maybe even Kings Island --- both the Zoo and Kings Island have new roller coasters --- but these also feel like things I can wait on. AnthrOhio figures to have a convention in 2022 and I hope they're right. As hard as missing one year is, missing two is ... well, in normal times, I'd say that was the end of the con. In these times? Who can know?

Curiously, when Motor City Fur[ry] Con announced their intention to run this October I felt all right with that. I guess it reflects my assumption that AnthrOhio would end up being in the summer. The later an event is the more confident I am that it won't be dangerous. Or it's so far in the future I don't have to decide whether I really believe it's happening. They asked if I was still up for running the panel I'd signed up for thirty years ago in late 2019, and I wrote back that I was, and was considering volunteering for another panel. I was thinking, back then, to just run the Raccoons and Procyonids SIG because I was feeling burned out on doing the same things every year, and now that feeling has all changed again.

The first mass event I really feel like I'm expecting to attend is Pinball At The Zoo, if it does happen Labor Day Weekend. Trusting that it's at the Kalamazoo Expo Center like it's been every year we've attended, well, there's space and there's voluminous air available and great big doors likely to be open to the outside and that's all quite comforting. I don't know whether that will happen, though. I also don't know whether MJS will have his usual open-house afterparty at his pole barn, nor how I feel about that. It's all so hard to think though.

Not hard to think through? My dwindling number of pictures. Here's stuff from around the house and around town in February 2021. Be ready for some adorable rabbit pictures. 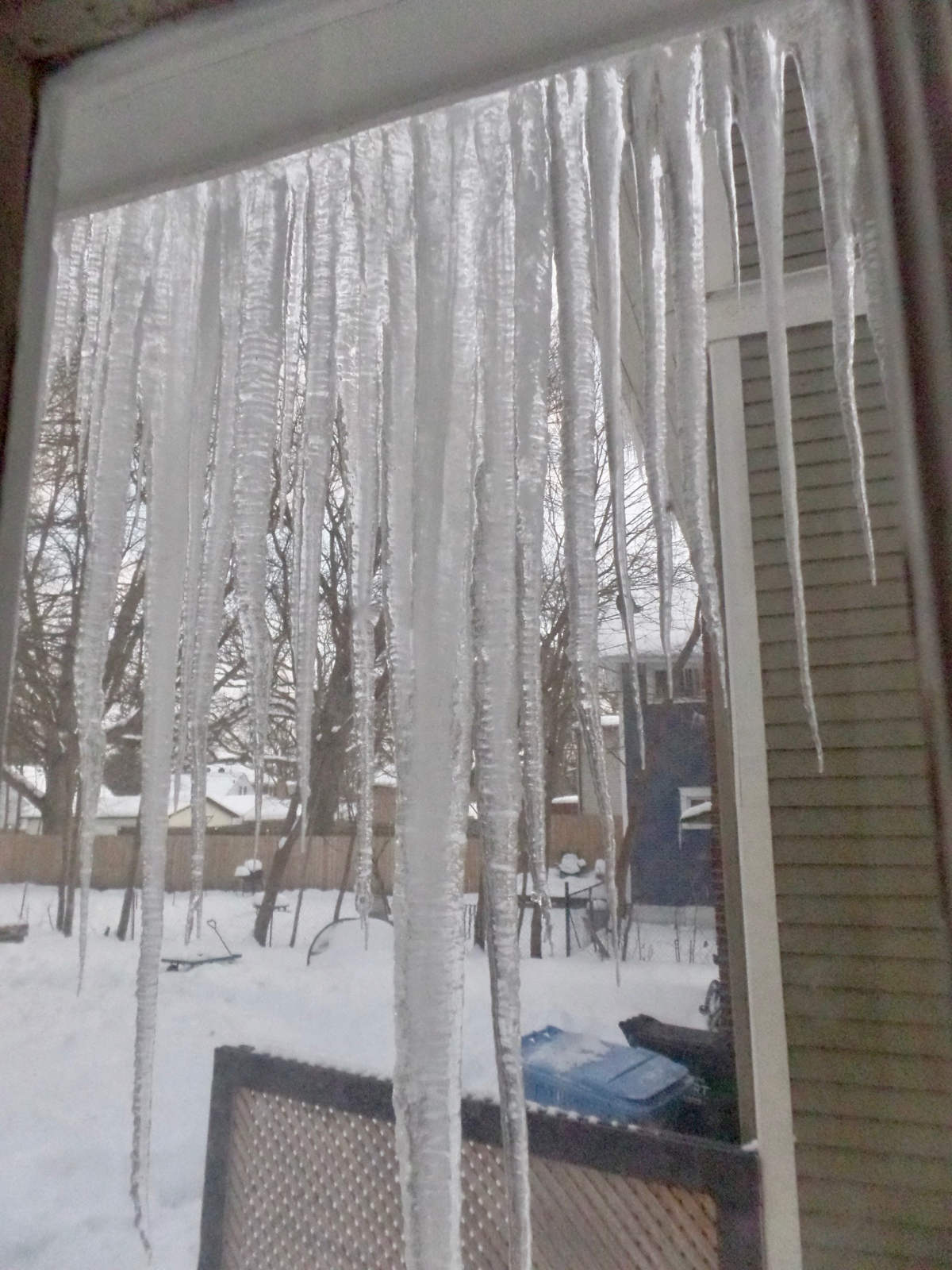 Another look at the icicles. This is why --- on the other side of the house --- we park a little bit farther away this time of year, even if it means maybe encroaching on the neighbors' side yard. 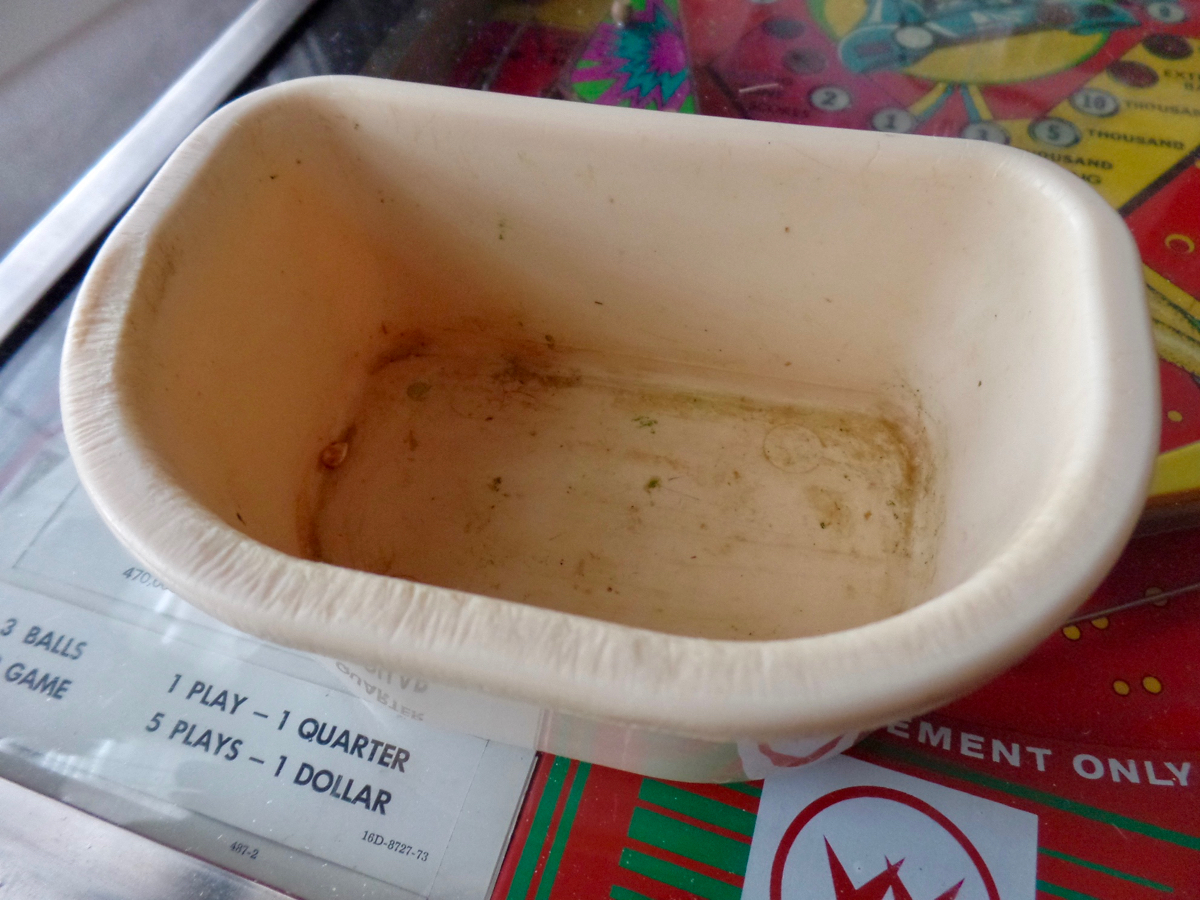 And thanking a food dish for its service! This bowl's held vegetables for rabbits going back to before Stephen. 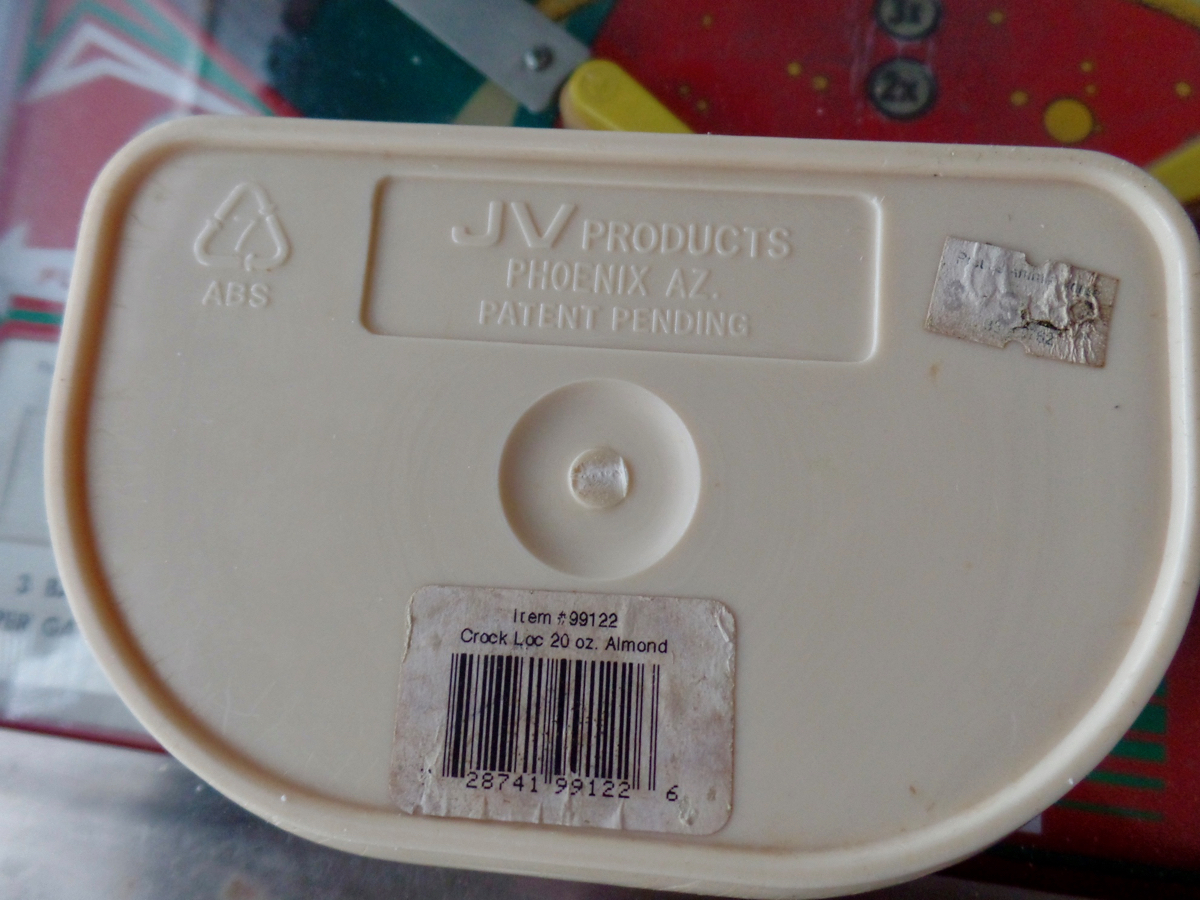 You can just make ou the Preuss Animal House price sticker for what's got to be $9.95 there, despite age and several passes through the dishwasher. But one of the posts that holds it in place on a pen or cage broke off, and so it would do nothing more than rest on the ground. We'd get a new food dish. 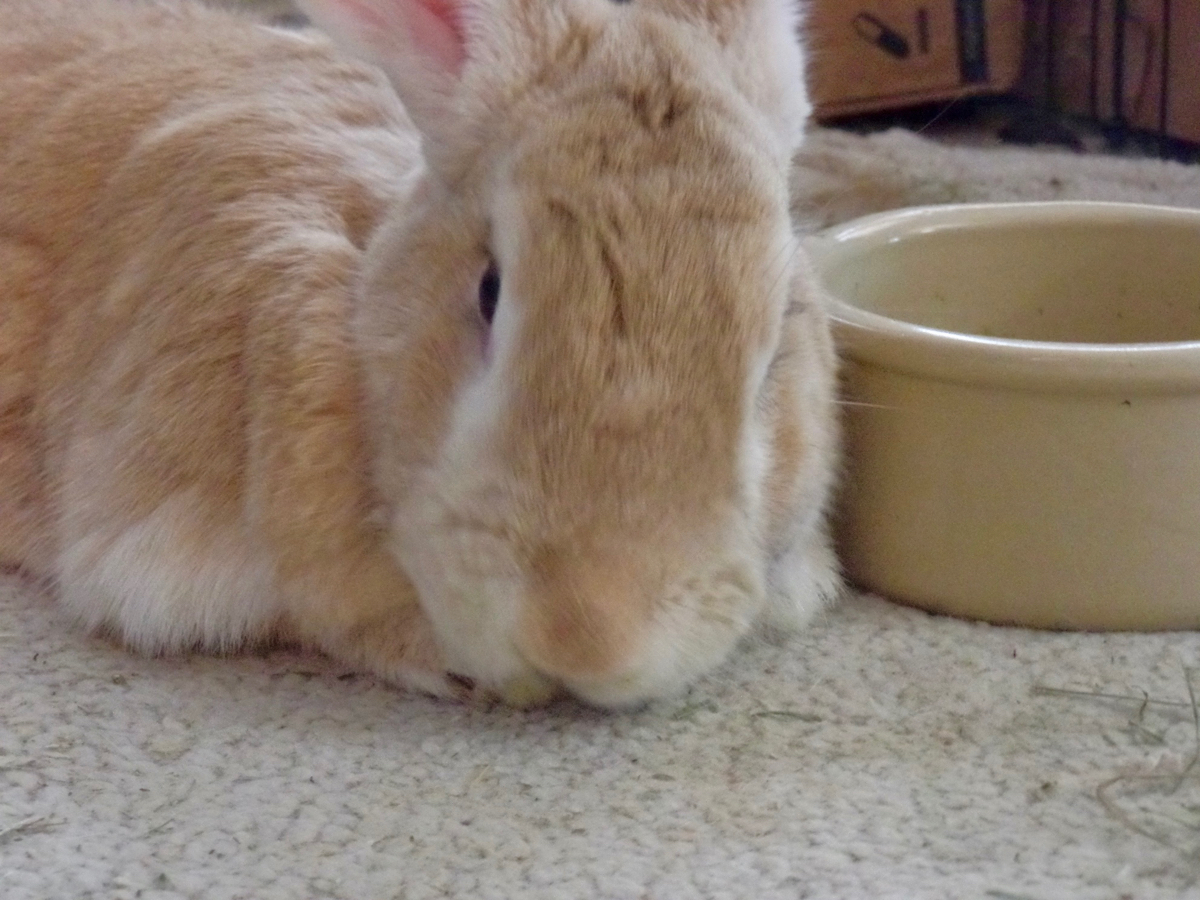 Sunshine resting beside her other food dish, the one for pellets, that didn't need replacement. Not yet, anyway. 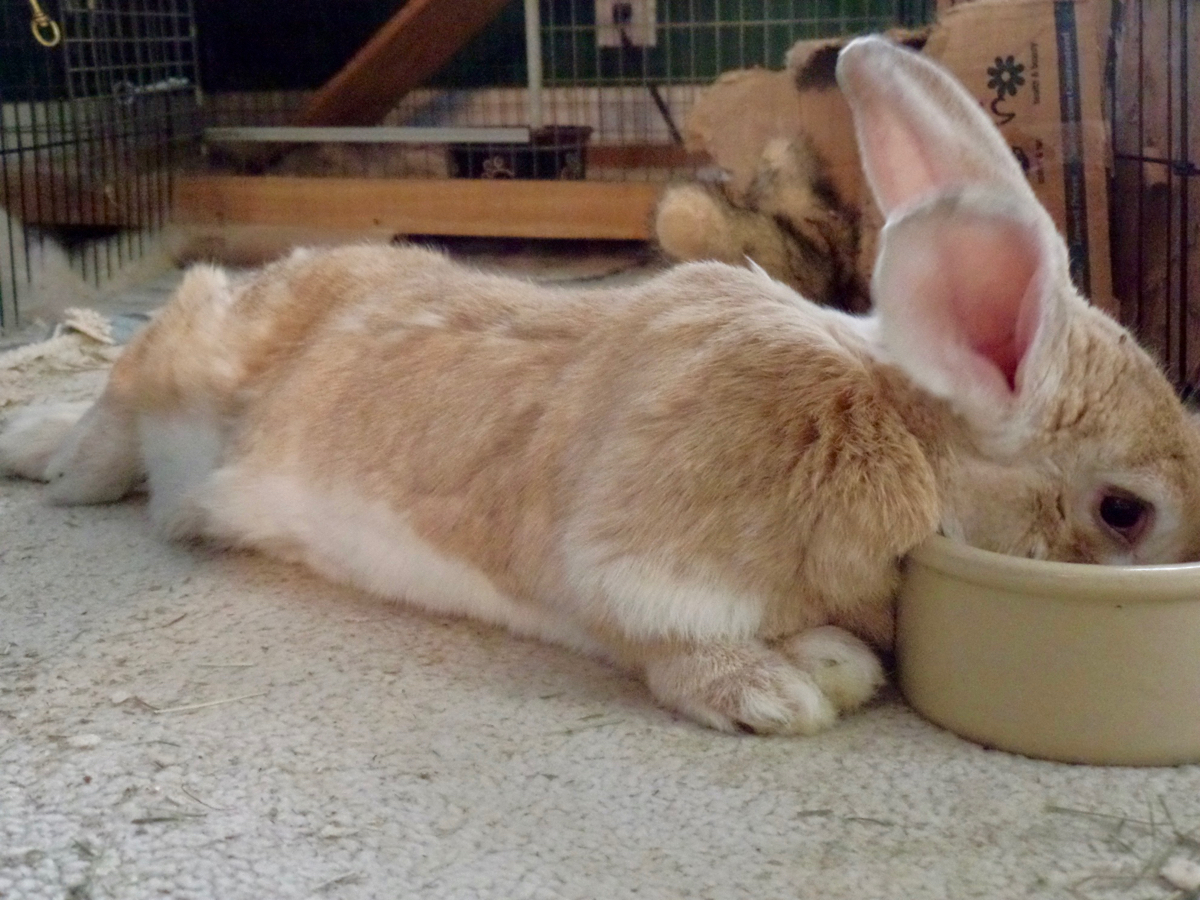 She rouses herself just enough to eat pellets. Don't tell me you're not envious she can do this. 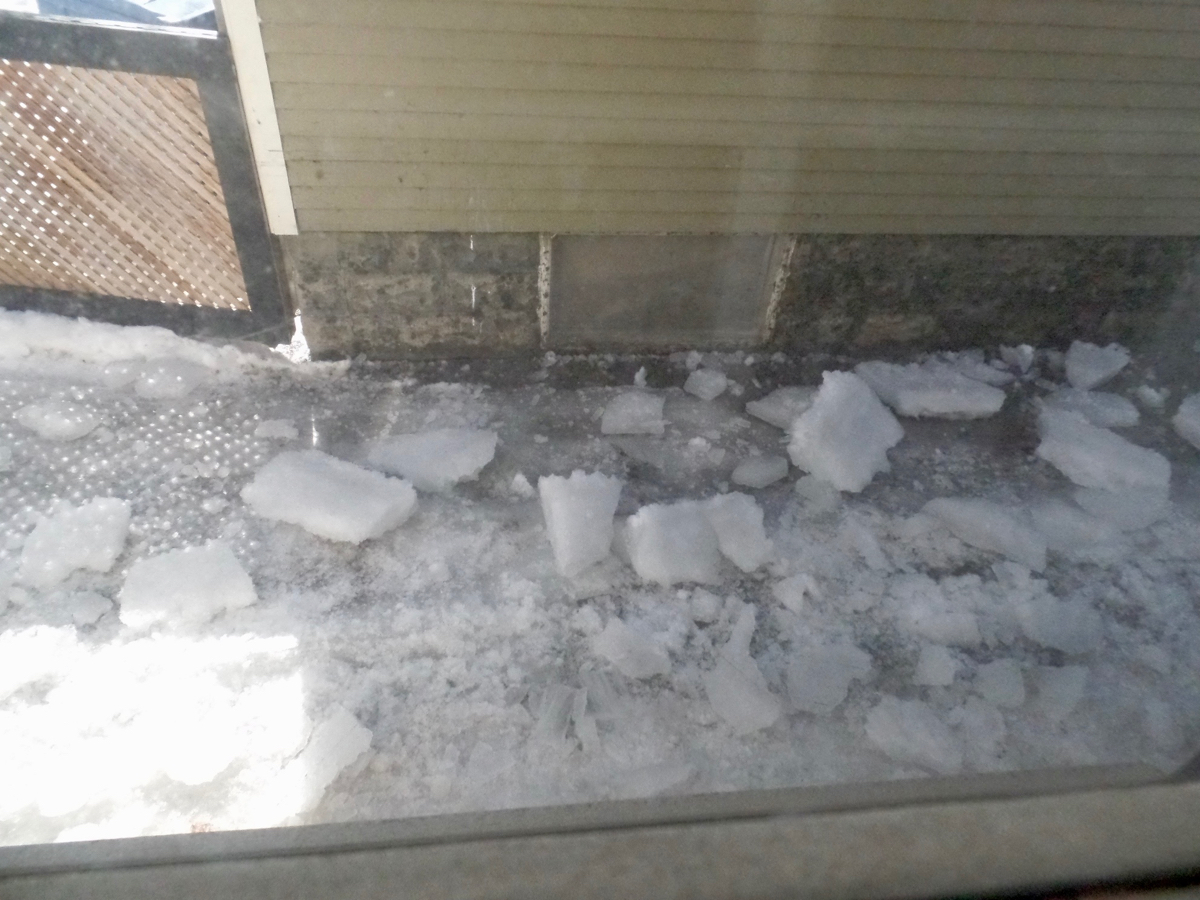 The first warm day and you learn why the neighbors never use that part of the driveway to park. 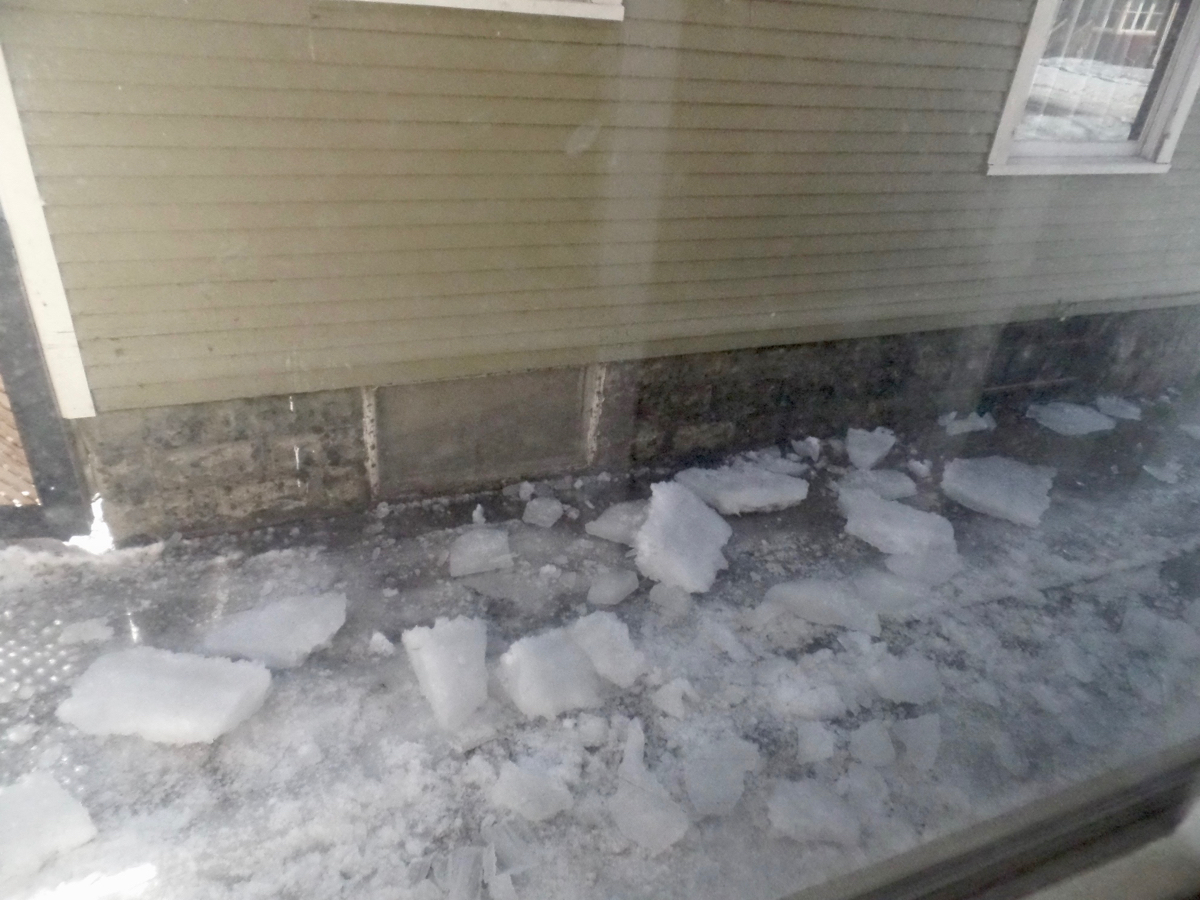 And maybe you can see where someone might not drive through this to park in the back of the house. At least not during the end-of-winter warm-up. 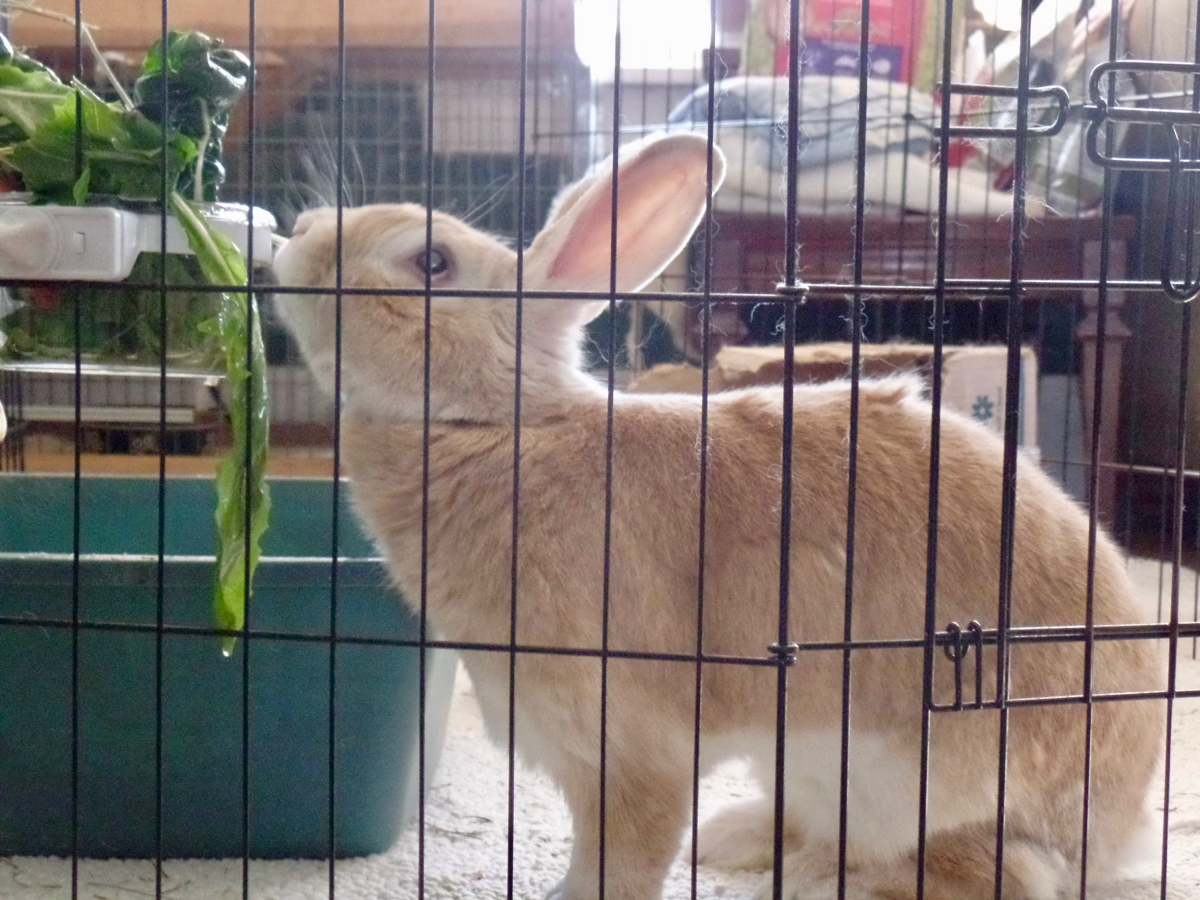 We got a new vegetable dish for Sunshine and she seems to be enjoying it. 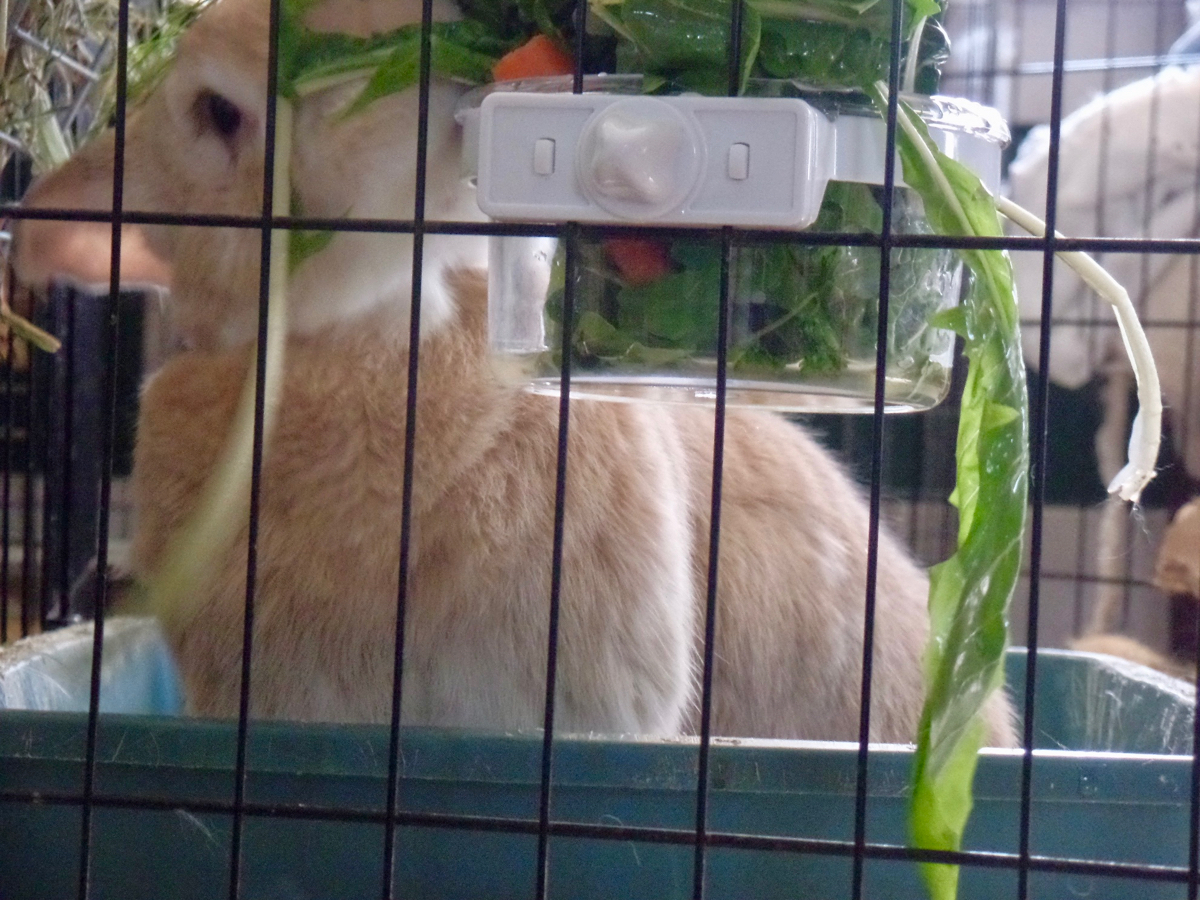 Must say I'm enjoying it too; she seems to stand around it better than she did with the old food dish. 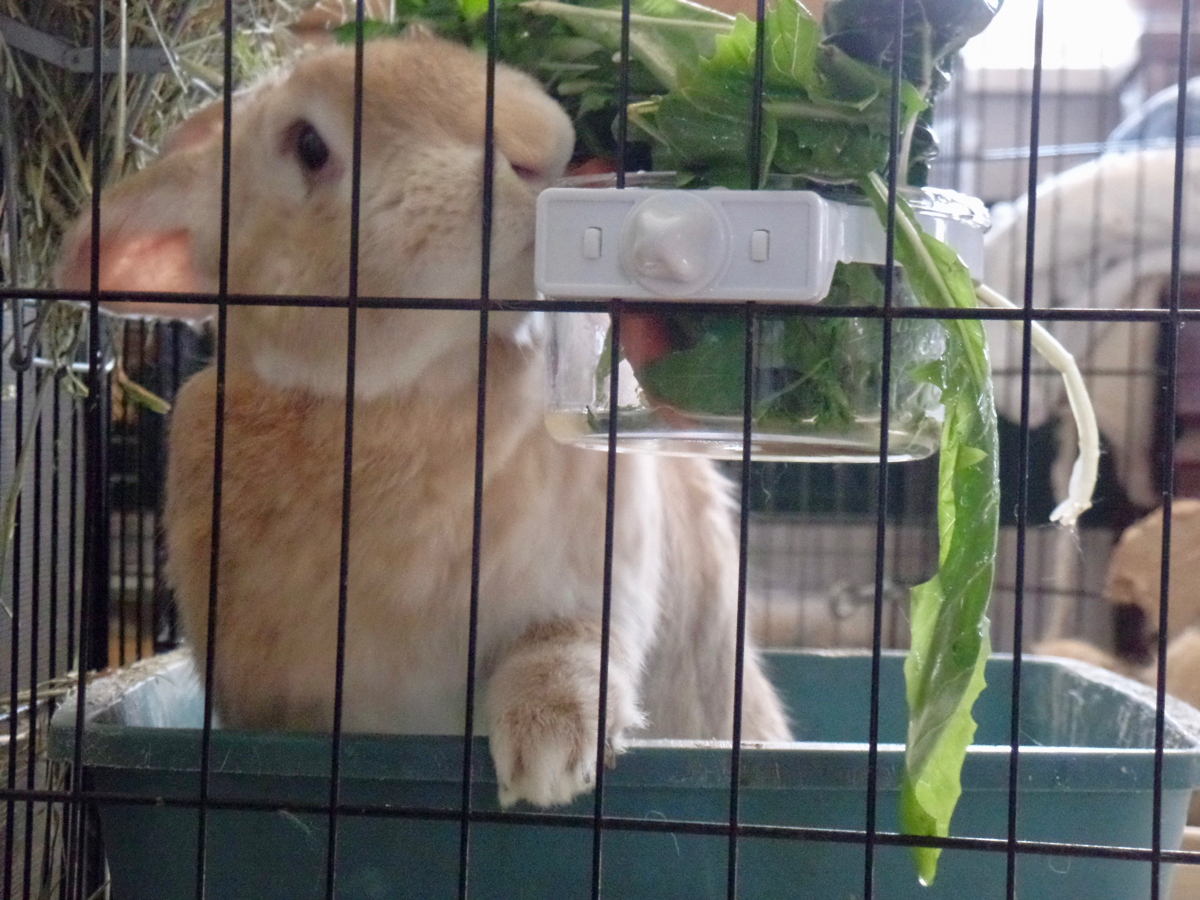 Look at that. Standing up with one paw on the shelf and everything. 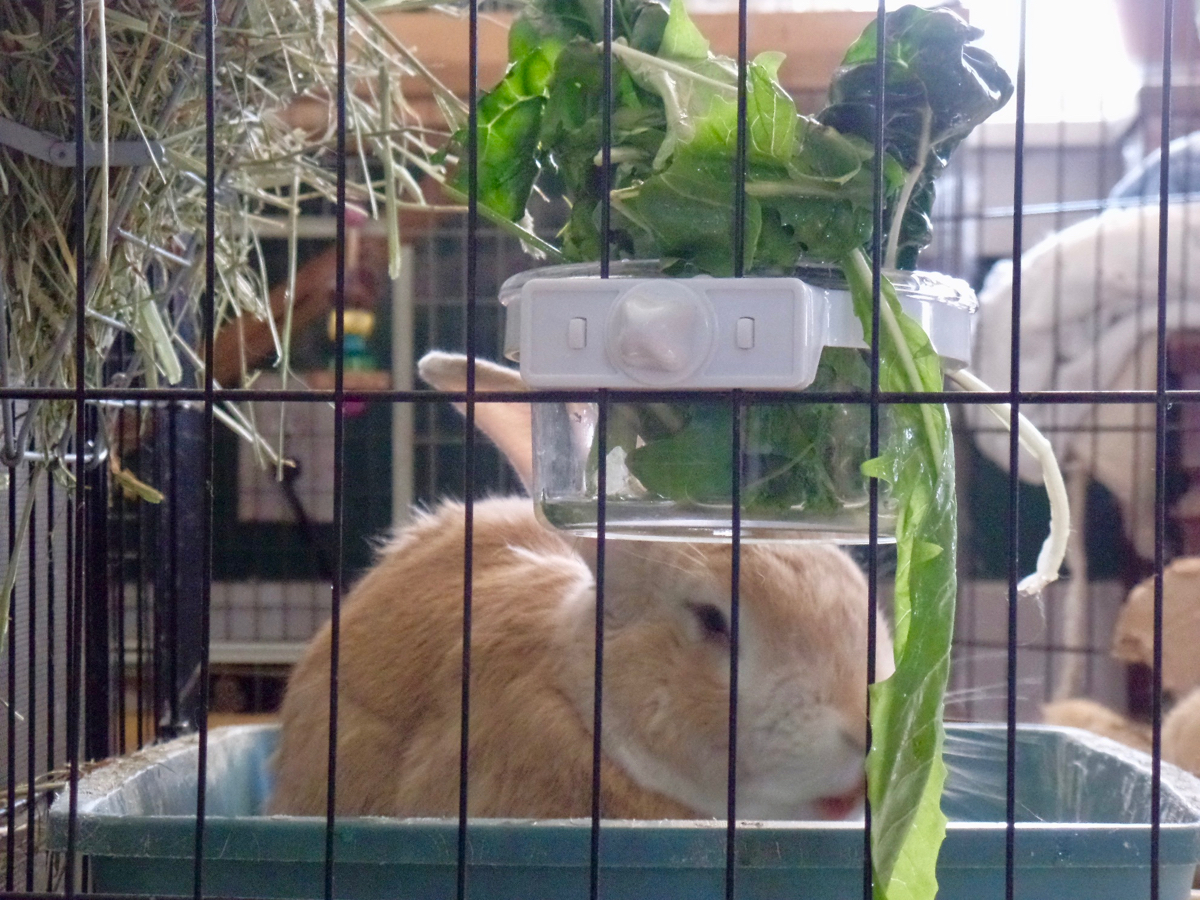 And oh oh aw you can see her open mouth isn't that wonderful? 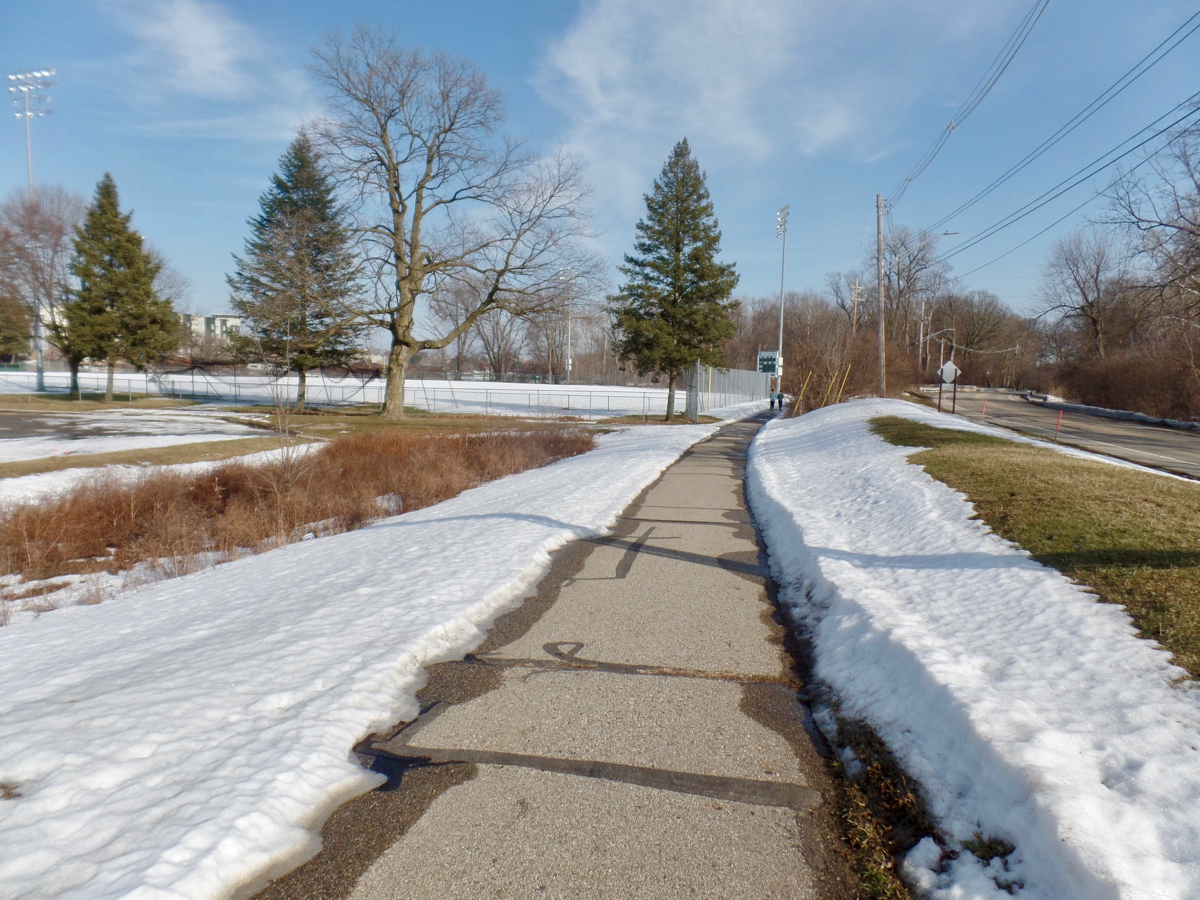 Taking a walk, as I'll do. Walking along the Lansing River Trail. The road, meanwhile, leads to Michigan State University.

Trivia: Tidal drag implies that by the year 2100 a leap second should be needed on average every ten months. By 2400 one should be needed every four months. Source: Marking Time: The Epic Quest to Invent the Perfect Calendar, Duncan Steel. (Current procedure would do this by one leap second at the end of the 30th of June and two at the end of the 31st of December, if current procedure were to encumber the year 2400.)