And do not let it in

Last week someone or other was selling plants at a nearby town park.

bunny_hugger bought a couple, some for us, some for her mother. Sunday we drove down to her parents' to spend the day and to deliver the plants.

This would be a visit striking in its normalness. We went down, we spent a couple hours, ate way too many chips and cookies and vegetarian Reubens and ice cream cones and all. We finished off a chapter of Mice and Mystics, also, the adventure that we had started and done uncannily well on over Easter. We'd had one last little bit of the chapter to finish and, what do you know, but finished it off well. This was probably the least troublesome chapter we've ever played. While we read the start of the next chapter, it sounded pretty complicated --- just the preliminary explanatory text was a page of reading, plus special rules for the escort mission --- and I voted against starting that right away. The result was spending maybe twice as long in setup and takedown than we did in playing, but that is kind of how Mice and Mystics goes.

One minor objective was

bunny_hugger running her own, off-site, backup using the other hard drive. She's been having an aggravating time lately with her backups here, because somehow her computers all have a curse on them. A flash drive and then a newly-bought hard drive have been being fussy and taking forever about making backups, when they choose to actually do these backups. Ah, but this separate drive? After about two hours, it reported that the backing-up of everything which had changed on her computer since Easter (the last backup) was about 55 minutes from completion. Six hours after that, it reported that the backing-up was two hours from completion. Also, while we watched, it finished backing up one gigabyte of the 25 gigabytes changed. We have no explanation for this phenomenon.

bunny_hugger doesn't usually like hard cookies. He spent a lot of the time explaining that these were great cookies, and asking when she was going to try them and agree they were great. When she finally did, well, they were okay but she doesn't like hard chocolate chip cookies. He was surprised by this development.

We forgot some of the plants we were going to drop off.

bunny_hugger's figuring to drive back down tomorrow, herself, and deliver them. It's also a fresh chance to run the second, off-site, backup. (She took the hard drive home, to run here, and drop off tomorrow.)

So, yes, this was almost exactly the sort of roughly-monthly visit we'd have made at any time.

Here's a couple more pictures from walking around town in April. 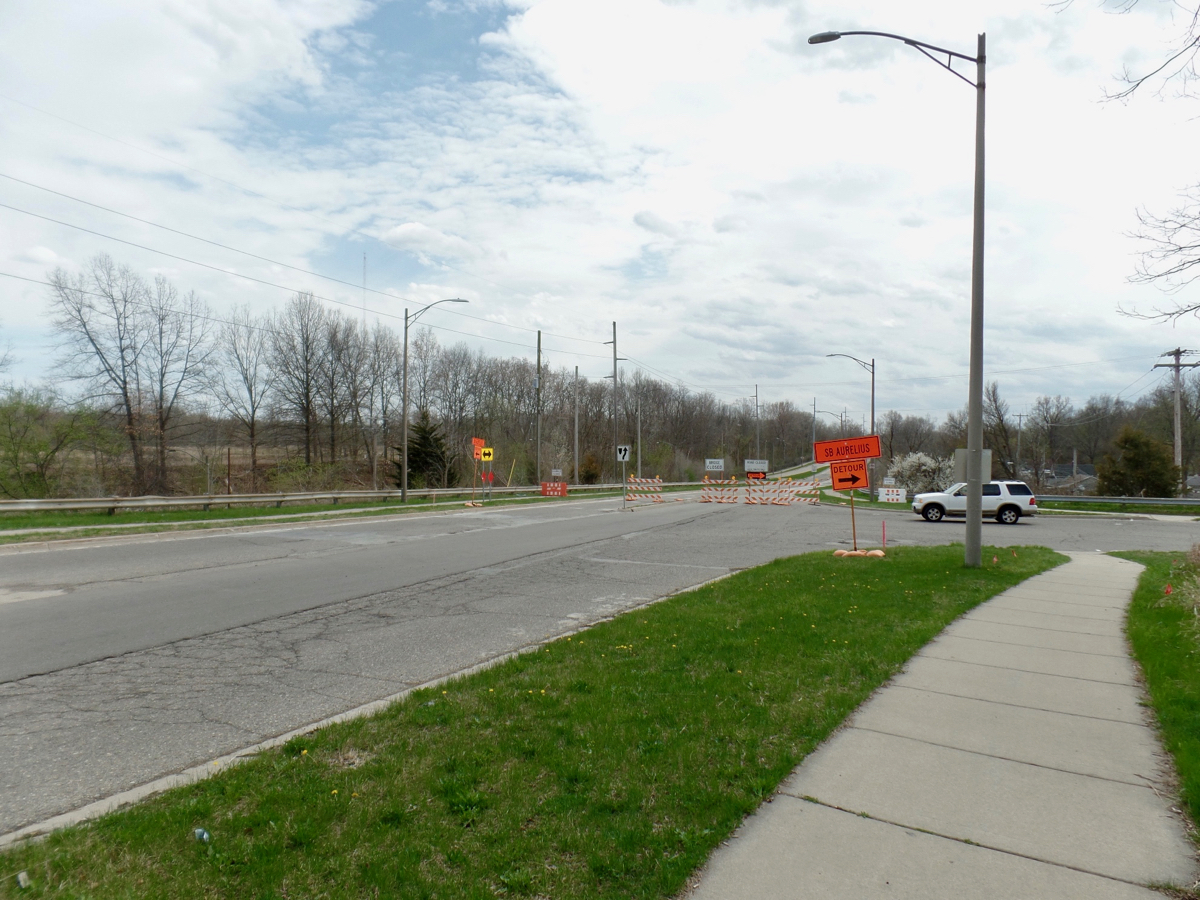 By the next time I went down toward the to-be-demolished bridge they'd closed the road to traffic and were trying to scare people off from approaching by foot. 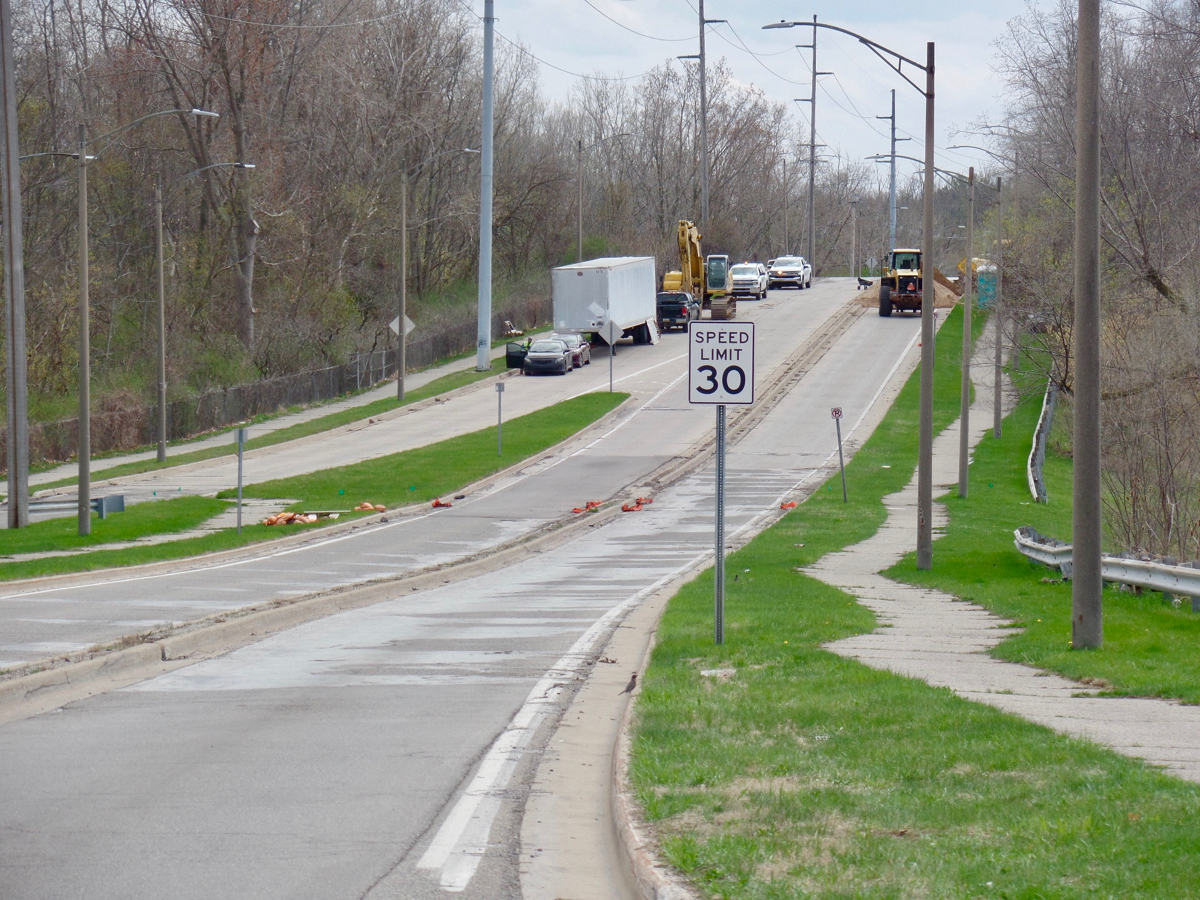 Line of construction-related vehicles and just a big old mound of dirt they have for some reason. 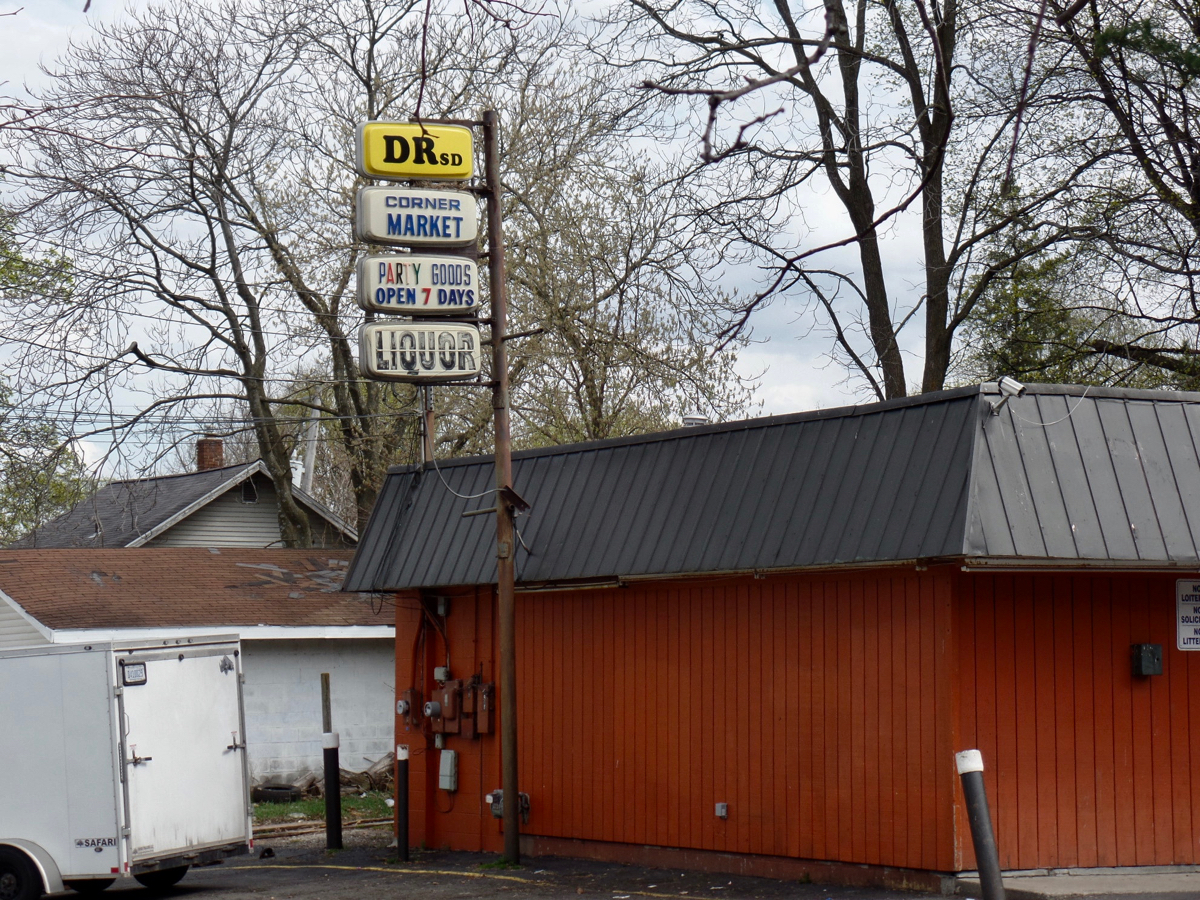 Walking around the part of our neighborhood that's cut off by the Interstate. Dr Sd is a convenience store that's surprisingly near and that we'll probably never go in. Also notice the rendering error in the shingles of the roof behind. 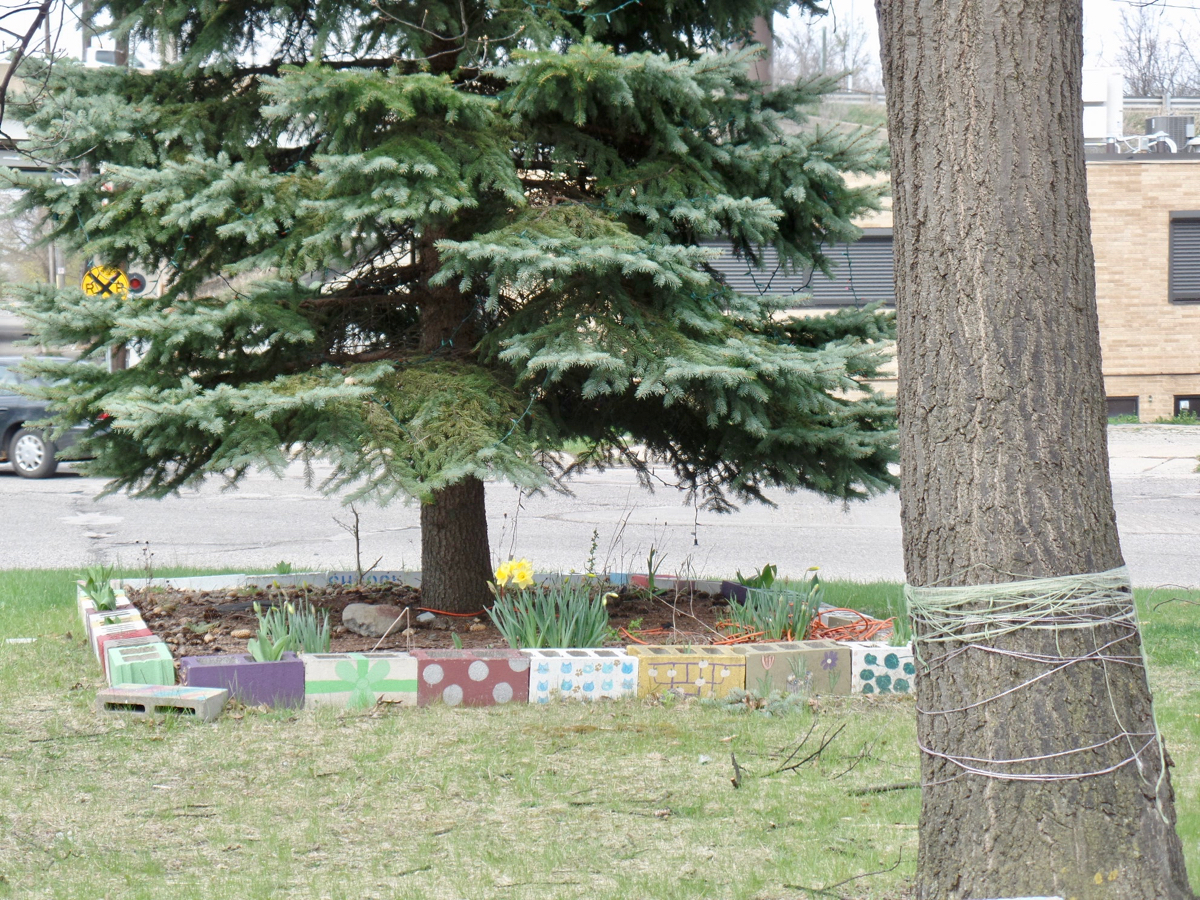 Tree in a traffic island given a festive container. 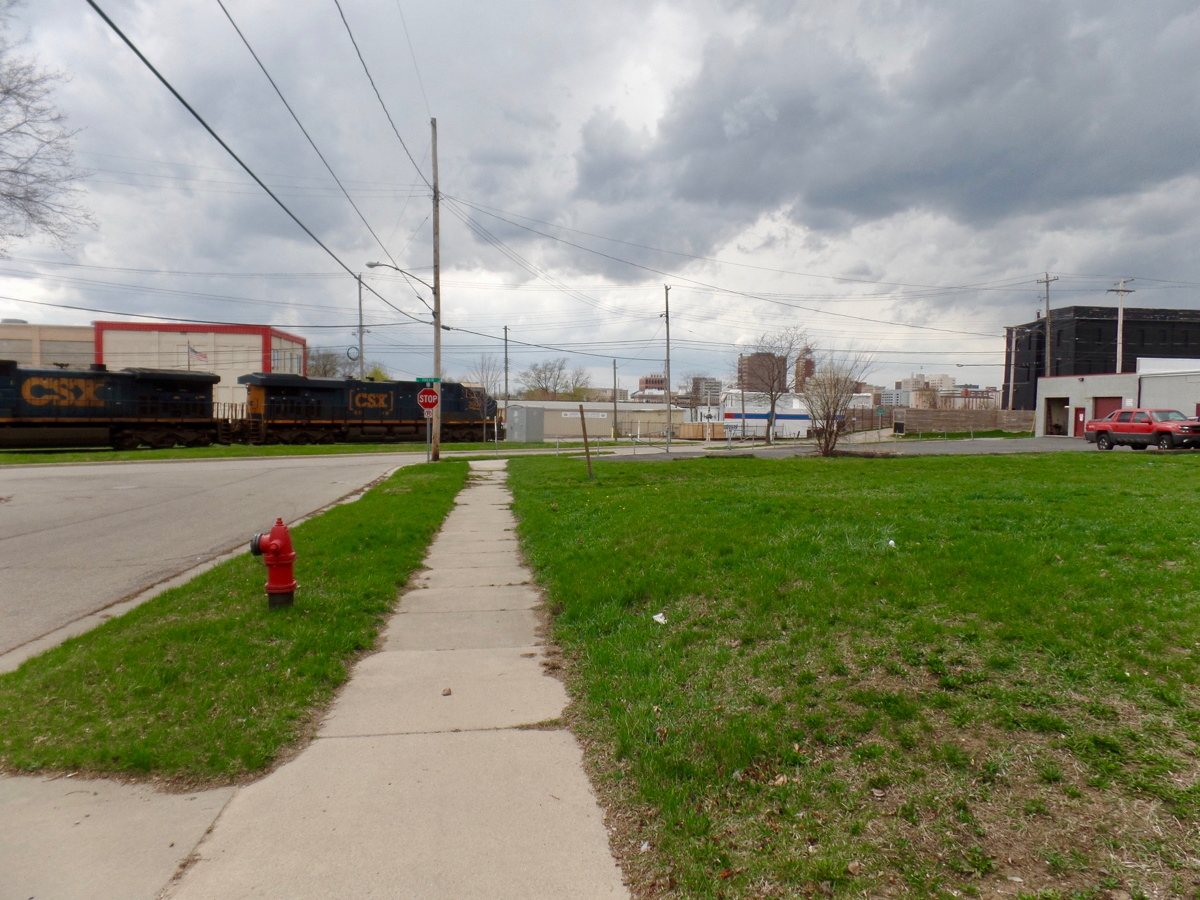 Another freight train, going the other way from the photographs shared recently, and on different tracks: this is a line that runs from the northwest of Lansing down to the southeast. The Grand Trunk Western Coal Tower's on a line that runs east-west. 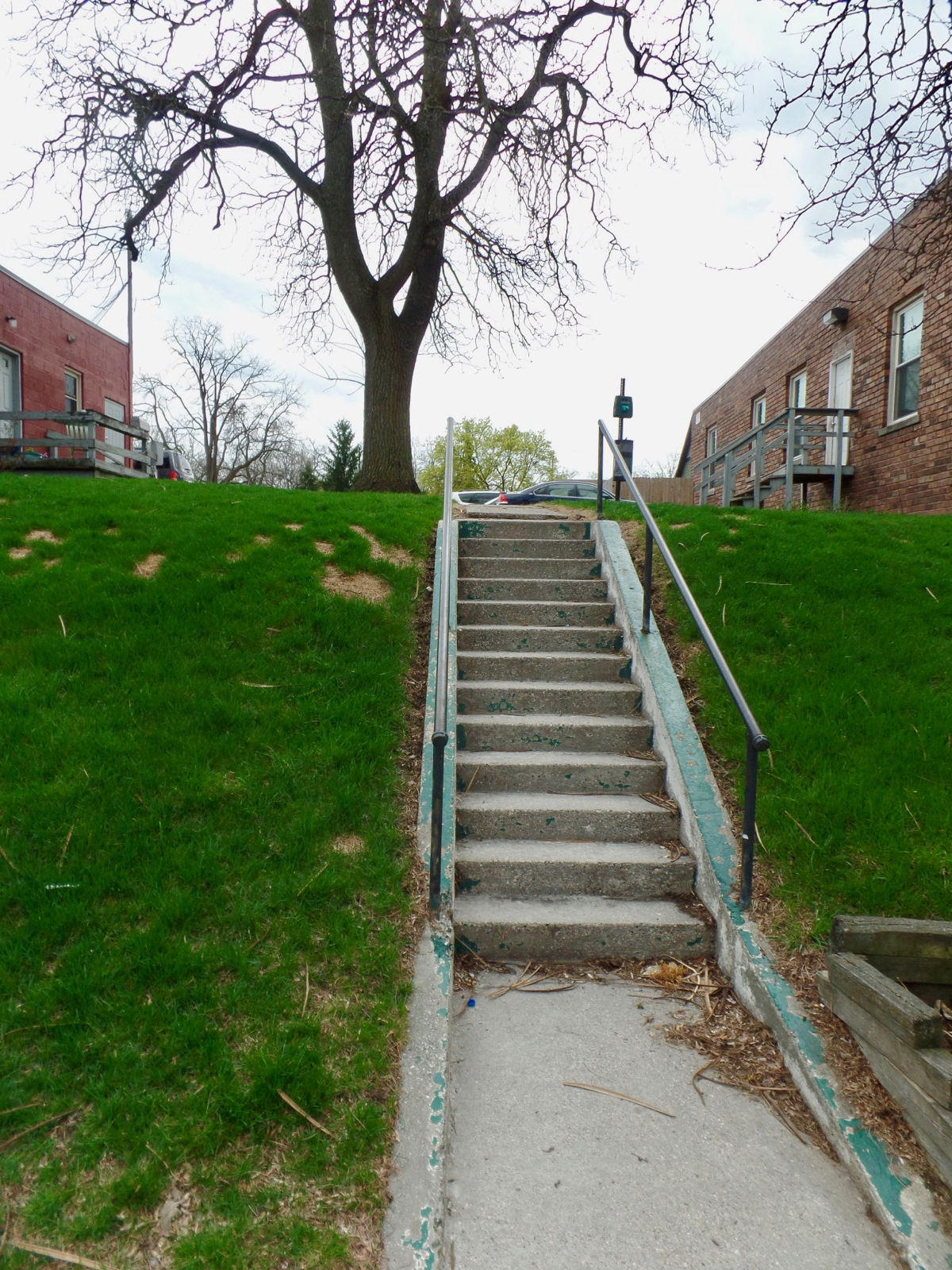 The ghost of a building. I had thought this was just a way to get at the parking lot between two bars that happens to be elevated from the sidewalk but, no,

bunny_hugger found there used to be a home there and this lead to the front door. The home's long gone, but the steps stuck around. 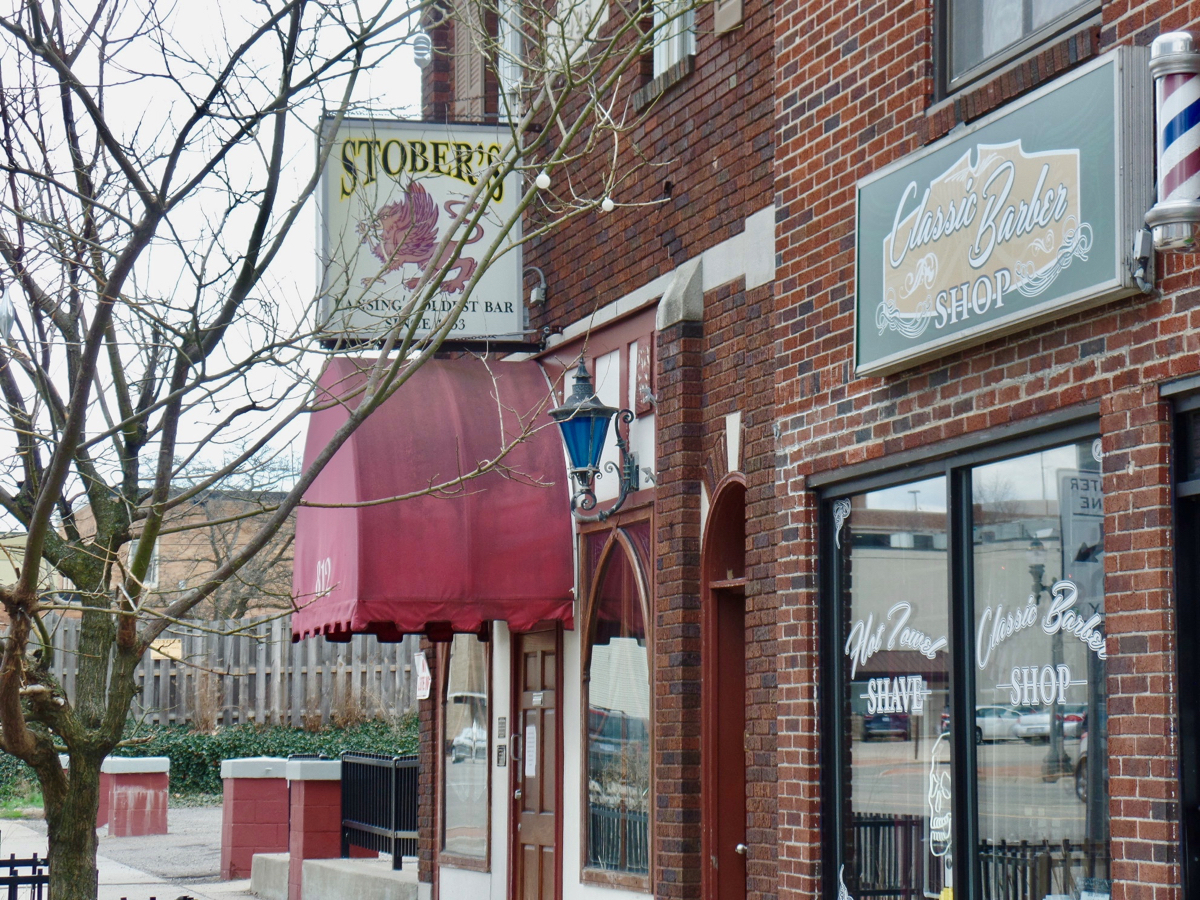 View of Stober's, the bar where we had our ``bachelor party'' where they mixed my cosmopolitan wrong and came over to fix it. 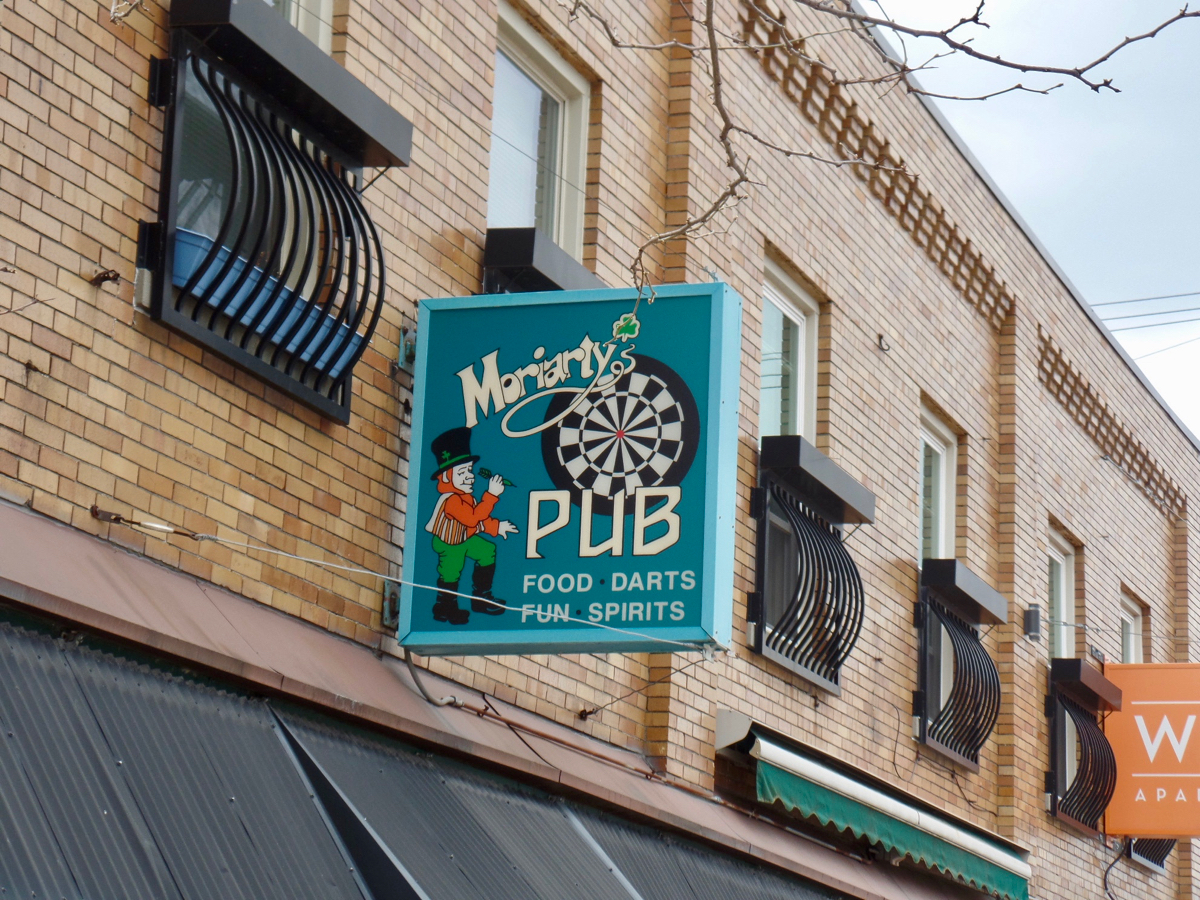 Moriarty's Pub is just past the vacant steps from Stober's. They have (I believe) the same owner and differ by Moriarty's serving food, which Stober's doesn't. But Stober's has shuffleboard.

Trivia: On March 7, 1778 --- after the hardest part of the winter at Valley Forge --- there were, from the 10,200 men nominally in the Continental Army with Washington, some 3,301 persons fit for duty. Source: The First American Army: the Untold Story of George Washington and the Men Behind America's First Fight for Freedom, Bruce Chadwick.