The existential threat is on its way

Got another week on my humor blog of MiSTings, cartoon reviews, and the occasional stray bit of weirdness. Did you catch all the weirdness when it posted? Here's your chance to catchup:

Now, the most exciting things seen walking back from the coal tower after I cut my walk short. 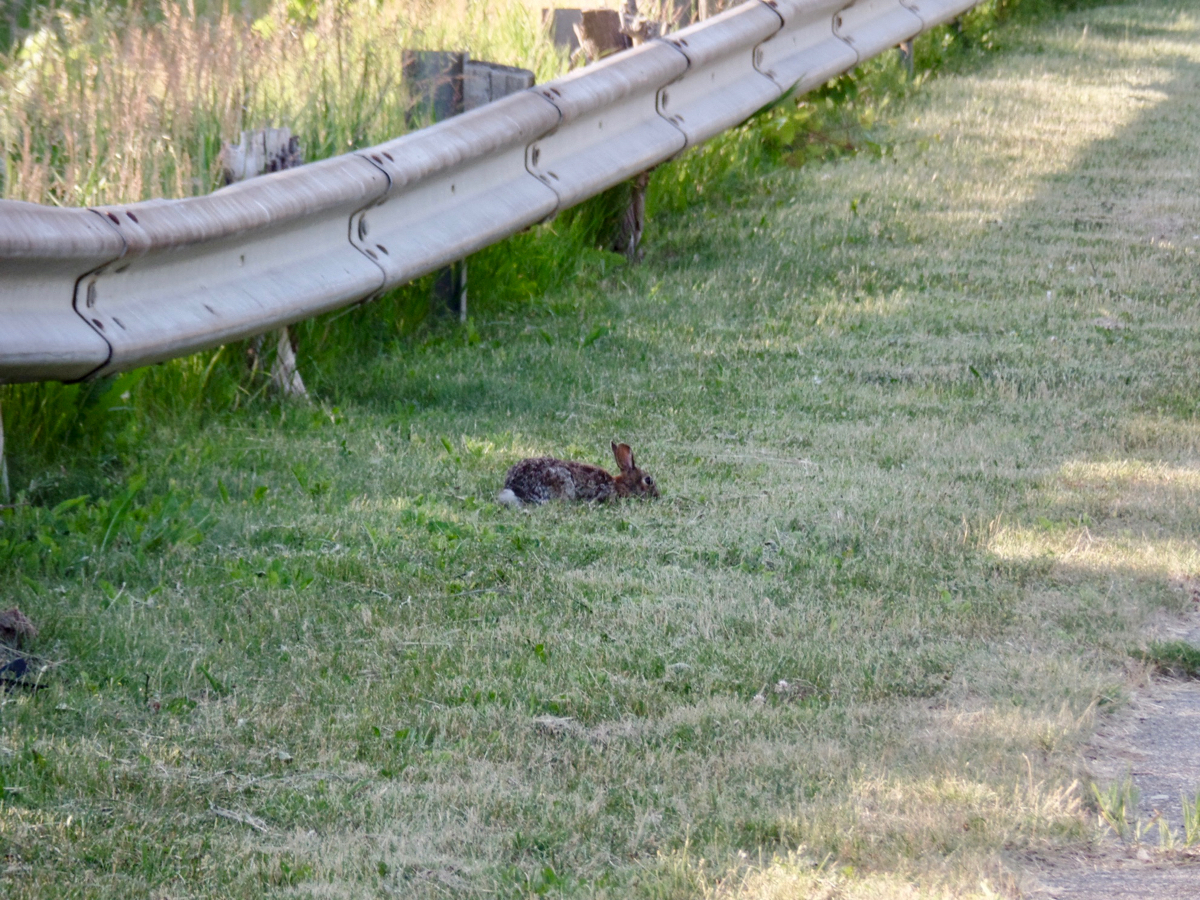 While walking home, along the part of Aurelius Road closed to traffic, I saw this cottontail having a bit of a late lunch. 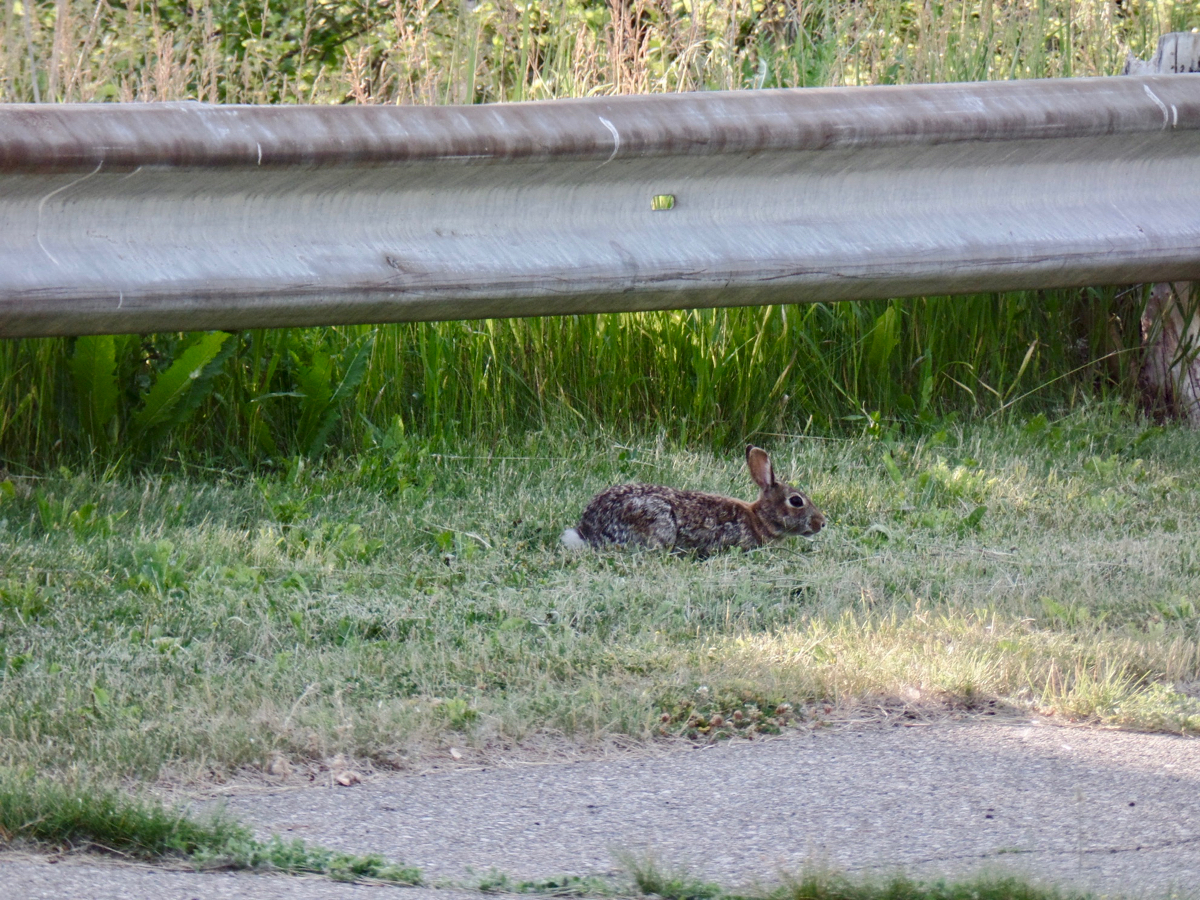 The rabbit wondered what the heck my issue was. I was circling around about forty feet away and walking around the middle of the road. 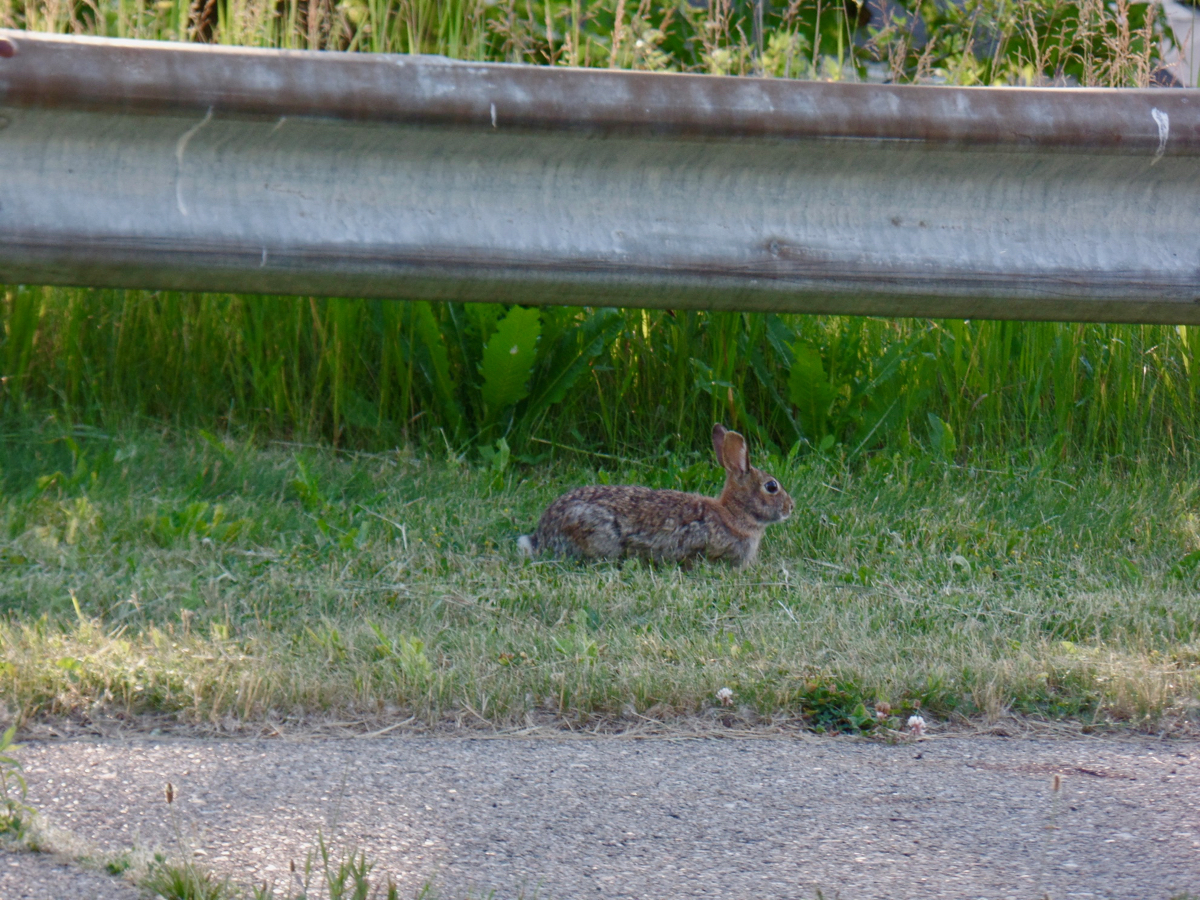 Rabbit's got one oversized eye on me. I kept promising that I had no ill intent but, of course, what rabbit is fool enough to trust a stranger saying that? 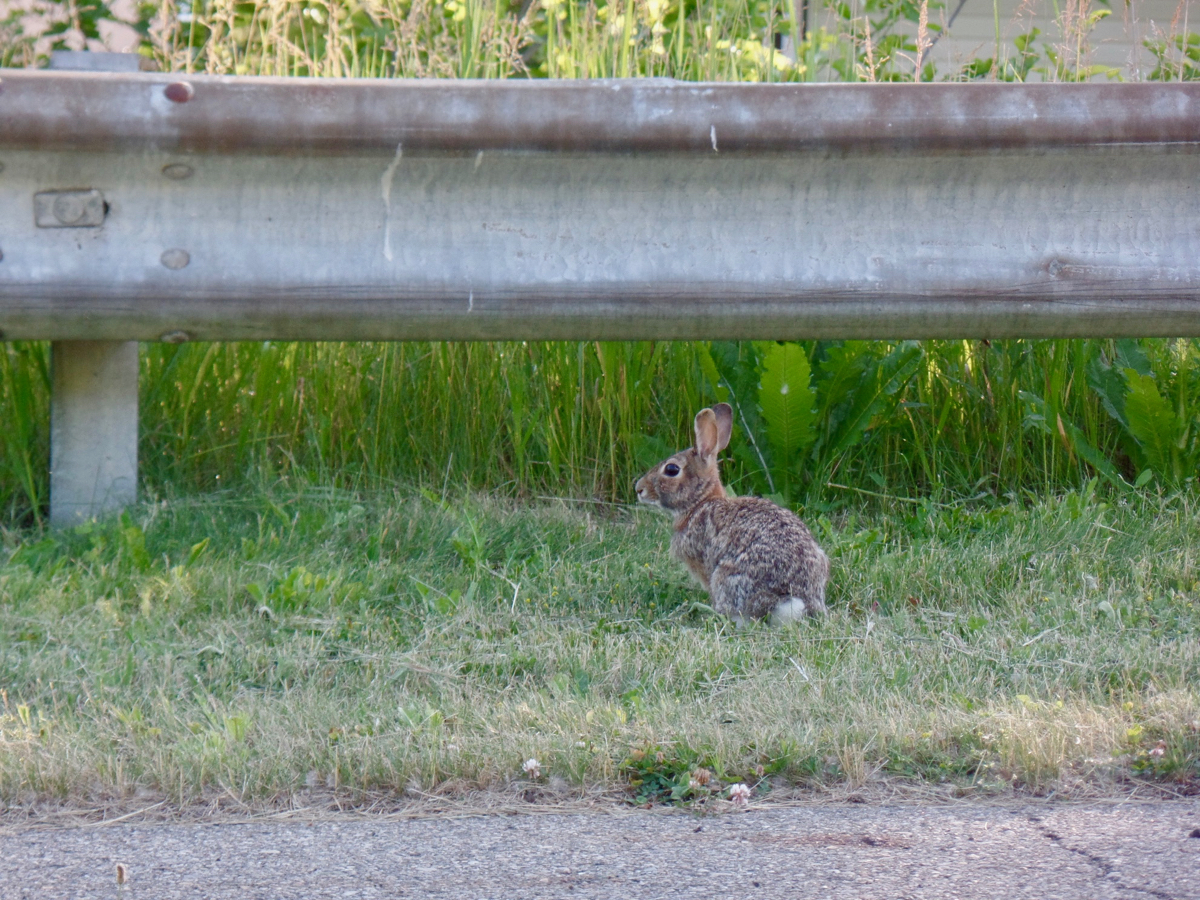 The rabbit got ready for a quick departure, but just kept an eye on me while I passed on the other side of the road. Optical zoom of 21x here, by the way. I buy cameras entirely on their optical zoom. 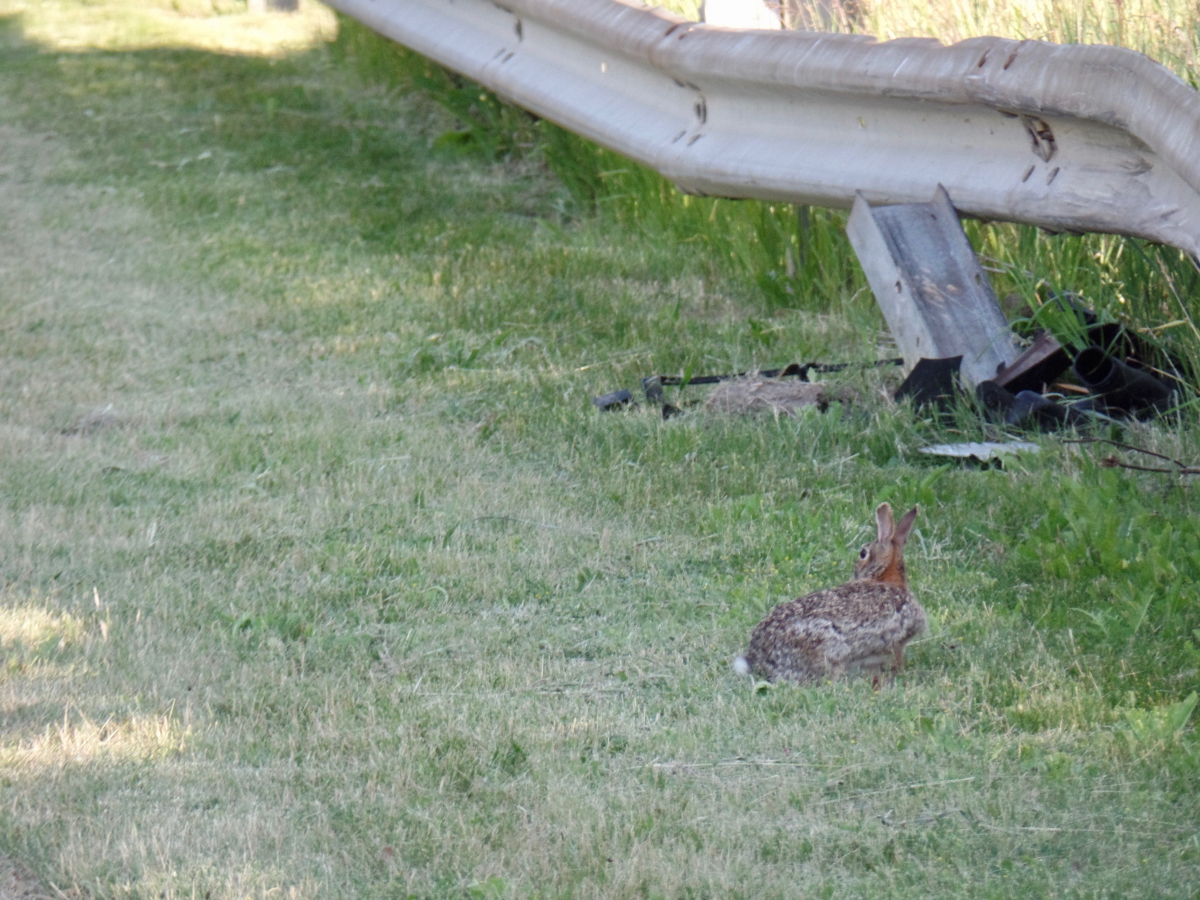 Last look at the rabbit, for me anyway. The rabbit was content that I was moving steadily away and therefore could be identified as friendly. Also, boy, look at the metal barrier beyond; that's seen some hard use. 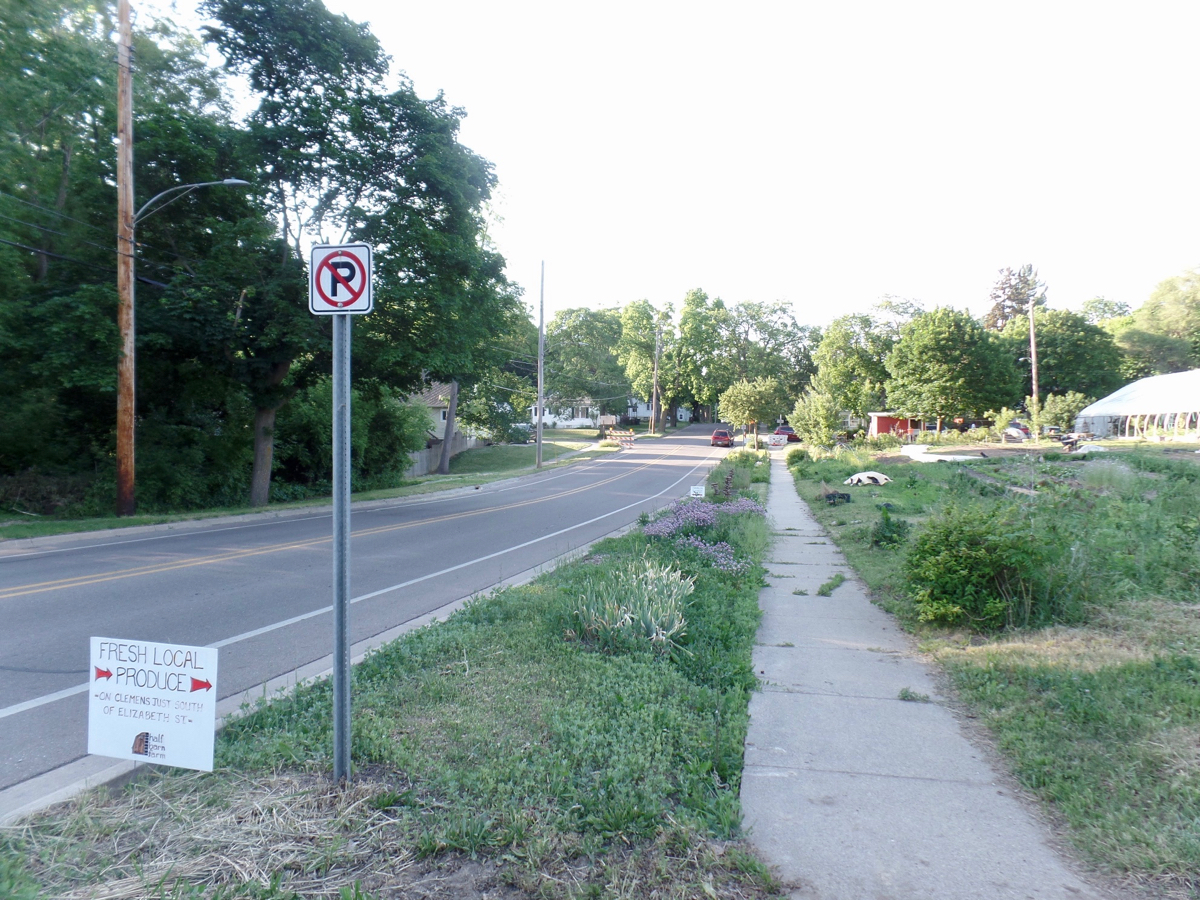 The county land bank is slowly taking every property on the Eastside and turning it into a community garden. The Half Barn Farm here is one of the more successful projects, and even gets people stopping to buy groceries. The car at the end of the block was stopped, I assume for mechanical problems. It was there when I walked down to the bridge and was still there, unmoved, when I got back. 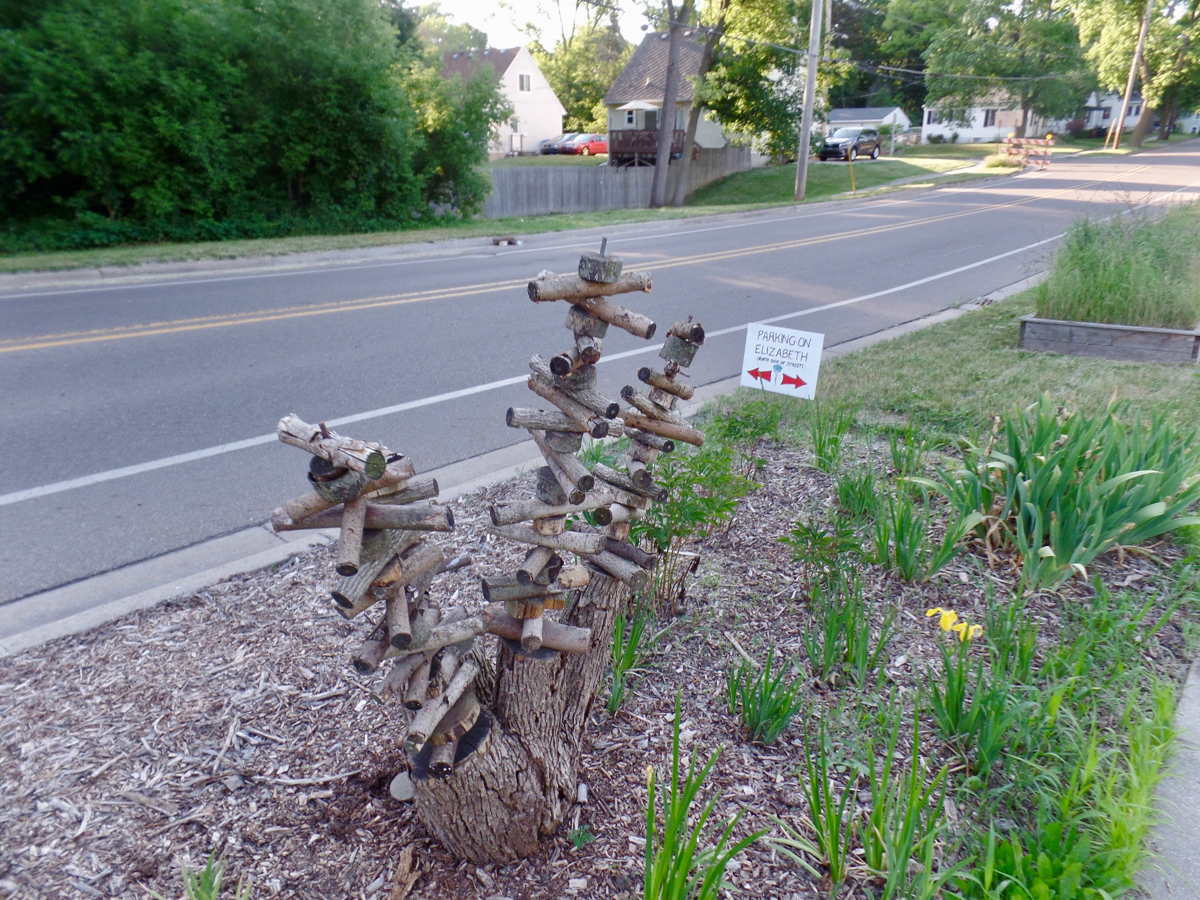 Tree stump turned into log sculpture at the Half Barn Farm. 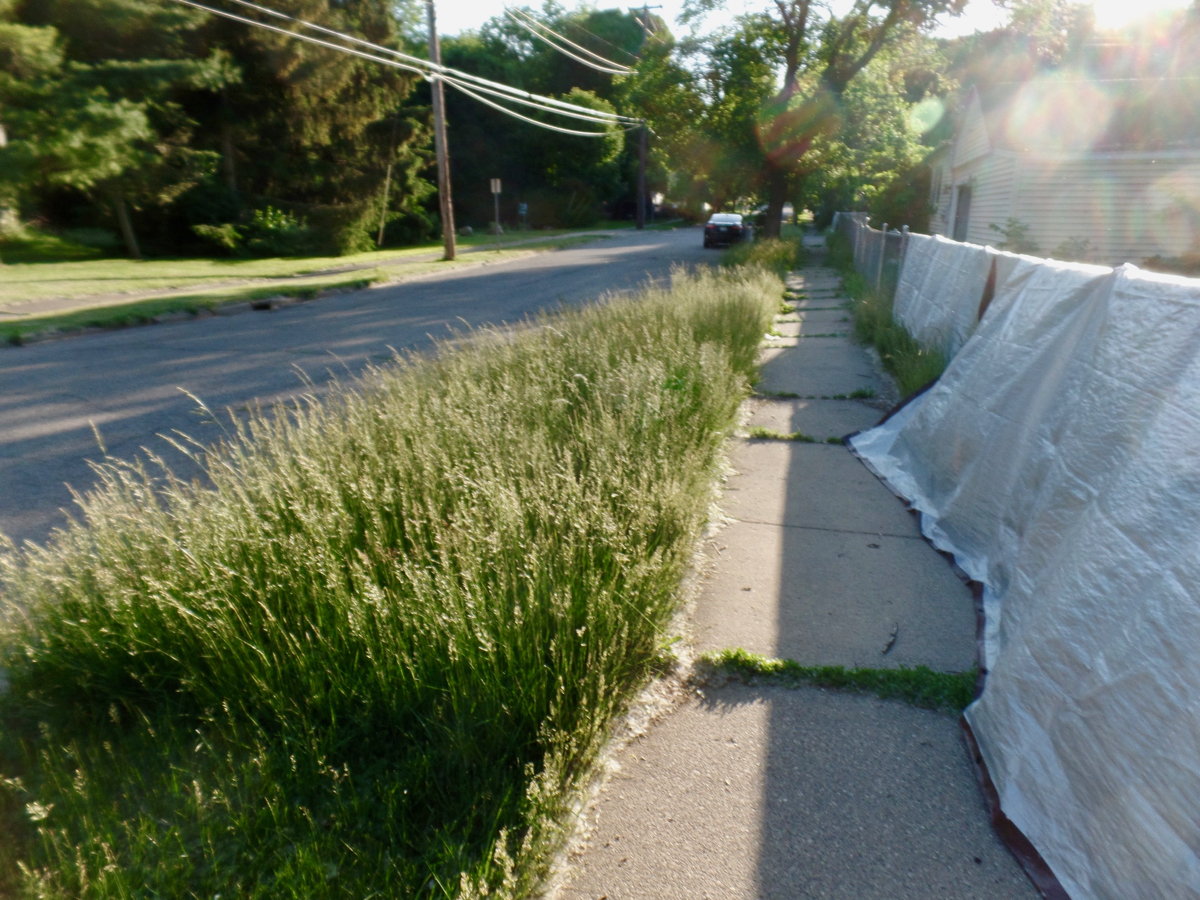 And then here's a house that's letting its lawn go feral. I don't know what the deal is but the neglect has gone on long enough to look deliberate. I think this is the house that, years ago, had someone raising chickens, but it's been quiet for a long while.

Trivia: During the Civil War, The New York Herald estimated an average of $30,000 was spent on entertainment in the city alone, and that this was a third more than Paris spent. Source: The Epic Of New York City: A Narrative History, Edward Robb Ellis. Ellis doesn't say how the Herald worked out its figures and, of course, the paper was looking to condemn the corruption of the day.

Currently Reading: Krazy Kat: The Comic Art of George Herriman, Patrick McDonnell, Karen O'Connell, Georgia Riley de Haveson. Hoo. OK. So. Text talks about how Herriman came to drive Fords and only Fords, insisting on them, out of respect to Henry Ford's politics and I was bracing to recognize catastrophic news about an early-20th-century iconic figure. What Herriman liked was Henry Ford's anti-war stance and that is, yeah, something where Ford put his reputation and money on the line. (Yes, he took war contracts --- it would be hard to not without getting tarred and feathered --- but he also, like, cancelled them the day of Armistice even though it cost the company a lot of money.) And I choose not to interrogate right now whether Ford's anti-war stance was a matter of humanitarianism or simply that he suspected you-know-who got all the money from war.