I'll be alone, dancing, you know it baby

I came to bed, about 40 minutes later than I meant, as always; somehow getting up from the living room and going to the kitchen for Sunshine's vegetables takes 20 minutes. But I got to bed and

Fantasy Island, in Buffalo, has been sold.

So, uh, I don't know how to feel about this. Like, I want to feel like it's good news, that these small, distressed amusement parks are being bought by someone who seems to want to run them as amusement parks. And the logic, if you have the capital to burn, is fantastic. 2020 was the worst year that amusement parks could have had since they invented economic indicators. Everything about them is going to be cheaper than it'll be for a generation on either side. This is the time to make big, bold investments and rake in gigantic heaps of cash later.

Catch being, you have to run the parks. The guy's experience, as far as I'm aware, consists of one year of Indiana Beach and one month of Clementon. Granted, a trial-by-fire year the likes of which will make all its survivors legend, but still. Also, you need to have the capital to keep running through business fluctuations. Maybe he has, especially since, like, Fantasy Island you could probably buy with whatever you had left over in Fantasy Island arcade game redemption tokens. But still, what if this summer is cool and rainy? And Fantasy Island was stripped; so far as I'm aware the only ride it has left is the Silver Comet roller coaster. Granted you could probably get it up and making money by hiring a fairground operator for the season, and expand things as needed, but that still takes cash reserves. Maybe the guy has enough? Maybe?

Some more pictures from the other day when I poked around the parts of Old Town near Preuss. It's the original hipster neighborhood in Lansing. 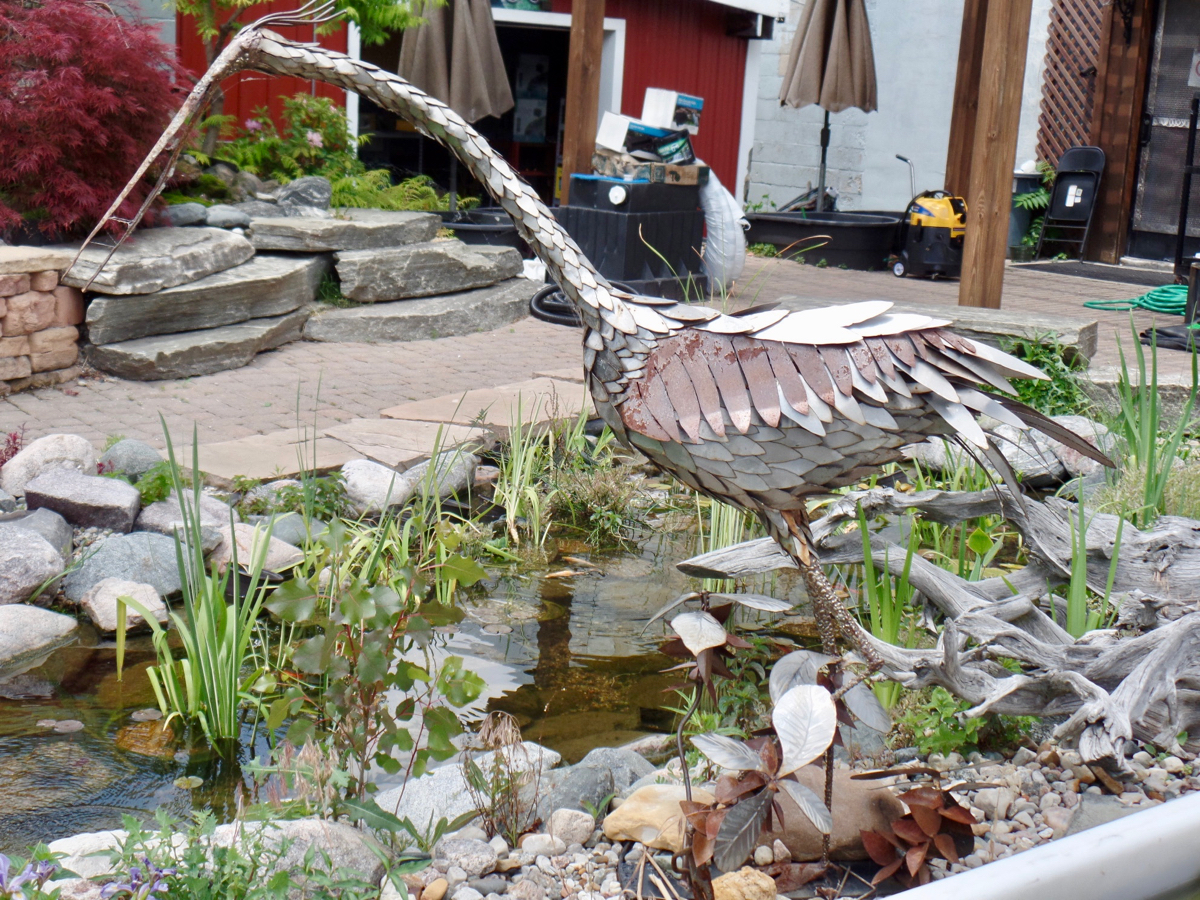 One more look at the metal-sculpture crane that overlooks the koi pond and that I'm sure doesn't bother the fish at ALL. 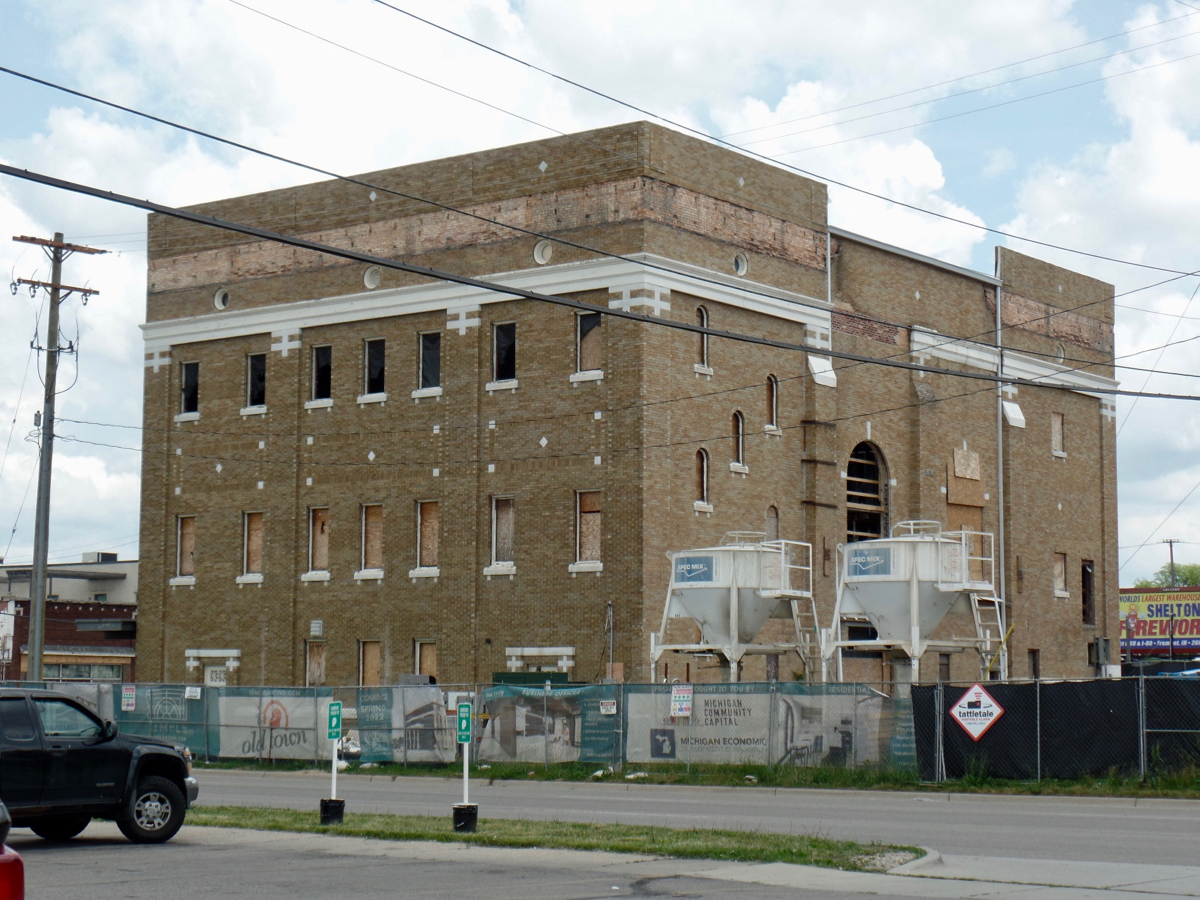 Across the street from Preuss is the old Bethlehem Temple Building, which for over a decade now has been a series of unsuccessful renovations projects. It's currently being renovation projected, this time into loft apartments, they think. 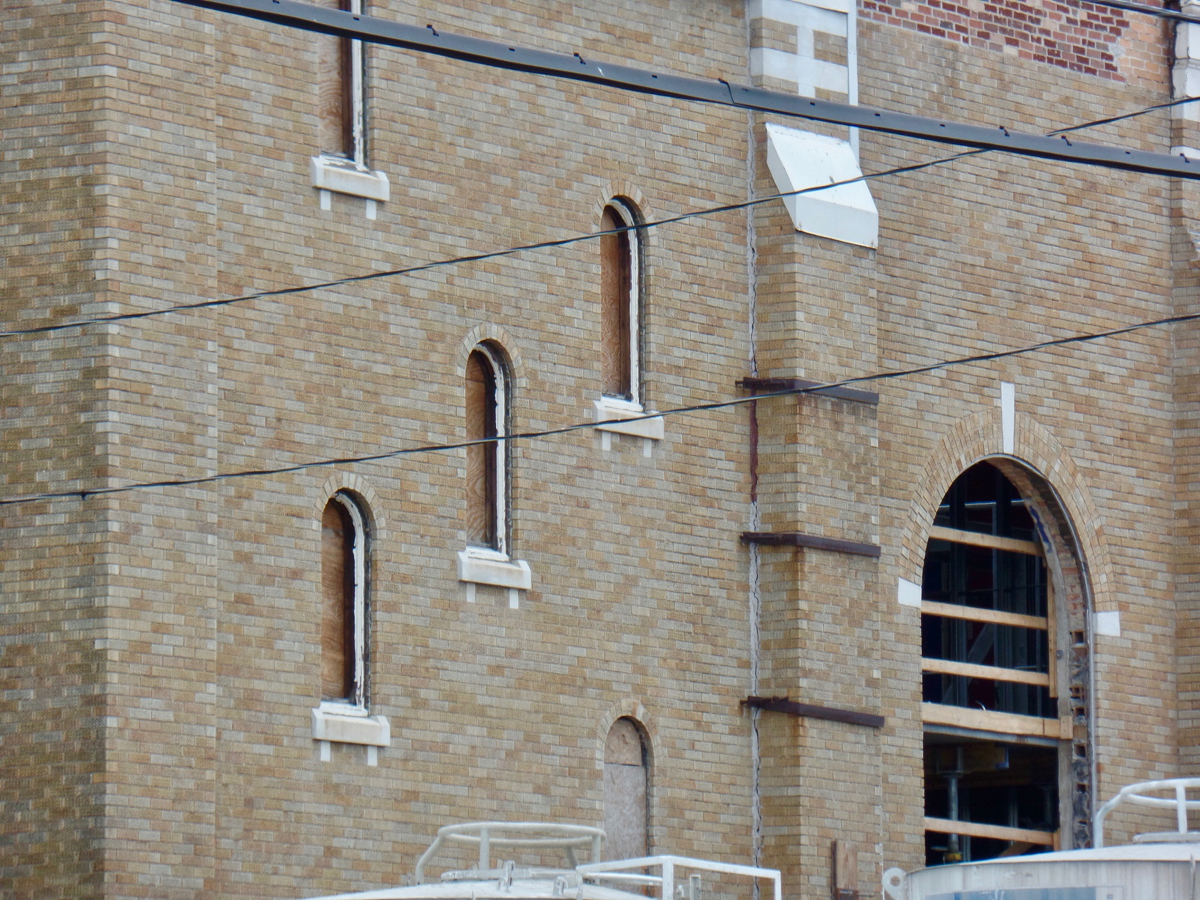 Close-up of the windows that until this project started had (mostly) intact stained-glass windows. No idea if they'll be restored at a later stage in renovations or if they'll just be replaced with mortal glass. 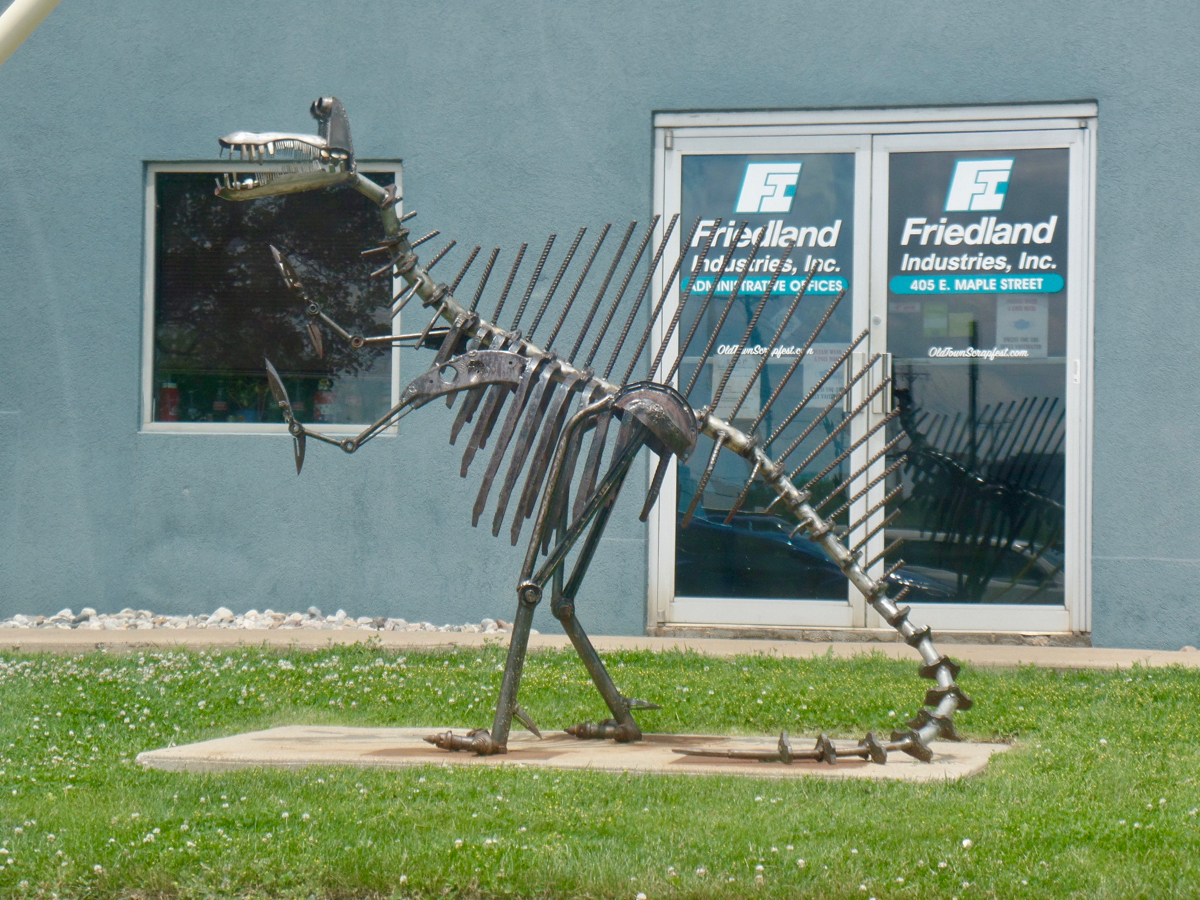 Metal-sculpture dinosaur that's actually not around Preuss. Instead it and a couple other figures are outside Friedland Industries, in the same area but over towards the scrap-metal collector. 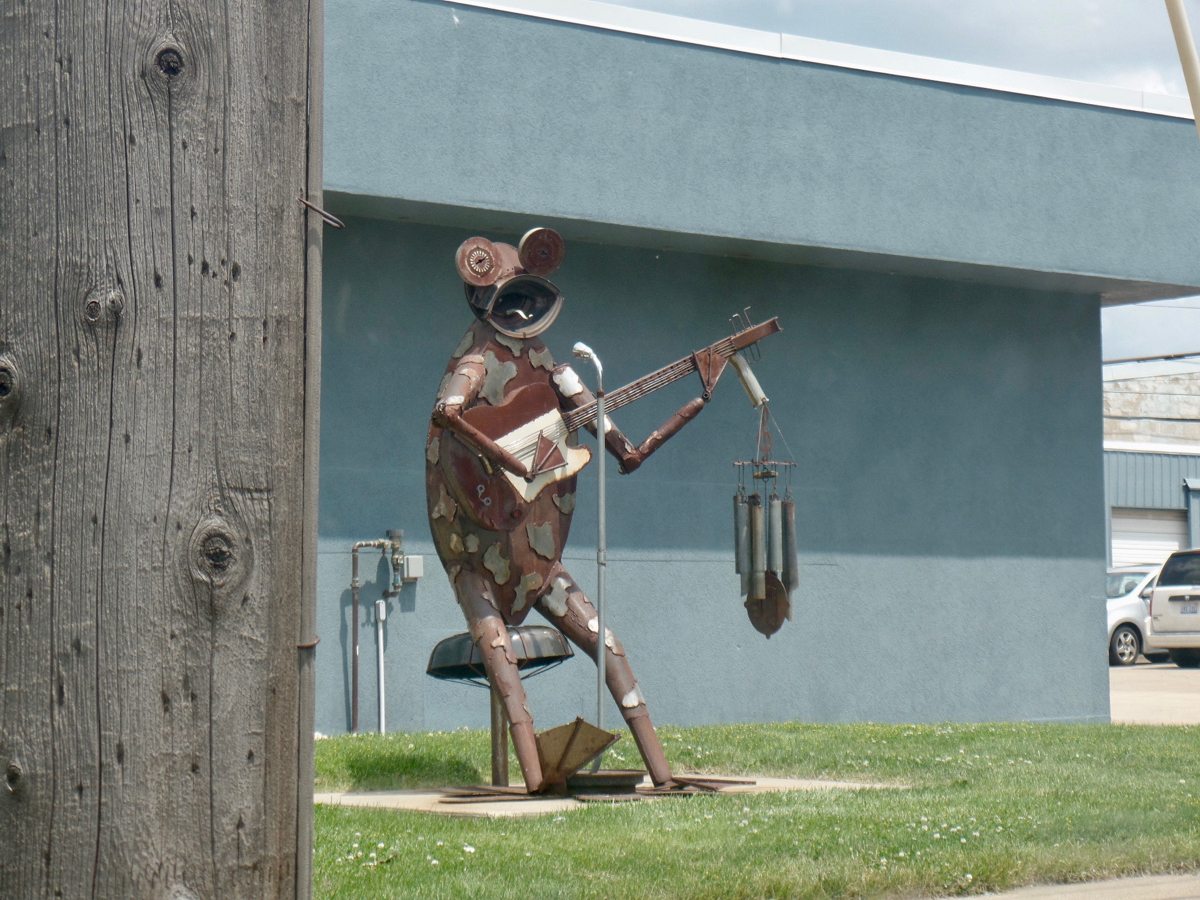 Musical frog metal sculpture that, again, is not outside the pet store or the scrap-metal collector. 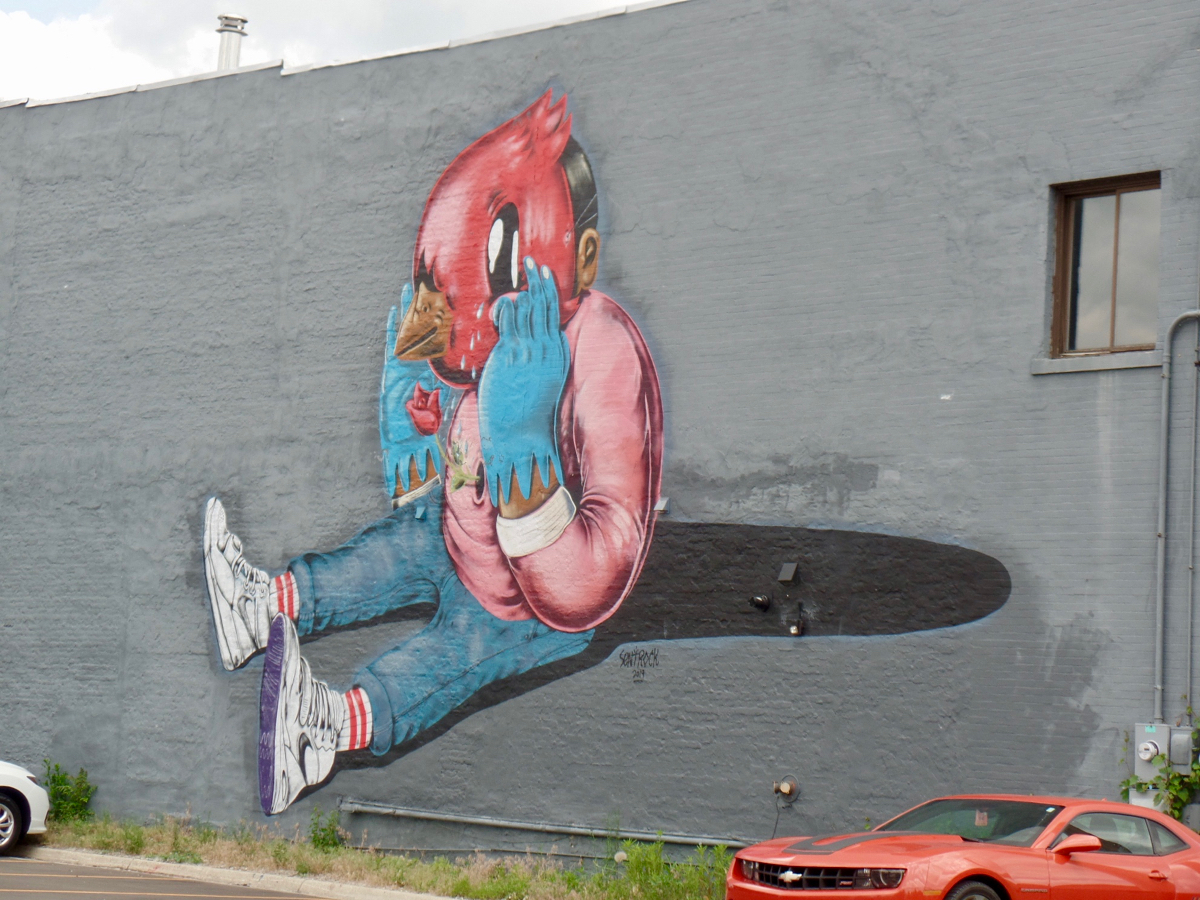 If it's not actually transformation artwork it's certainly sneaking up towards it. Big mural on the west face of The Grid, hipster bar that advertises itself as a great place to play pinball, even though it's really not and the pinball includes Paragon, which is one of the most brutal early-solid-state games.

Trivia: In 1582 Queen Elizabeth's advisor John Dee proposed the dropping of ten days, to bring the English calendar in line with the Gregorian and better in line with the seasons, this by dropping three days in May, one in June, and three each in July and August of 1583. (The days were picked to avoid importnat days and holidays.) Source: The Calendar: The 5000-Year Struggle to Align the Clock with the Heavens --- And What Happened to the Missing Ten Days, David Ewing Duncan.