Love's strange so real in the dark

bunny_hugger's parents. Partly to see them, yes. Partly to bring some plants to her mother. Partly to continue our Mice and Mystics campaign. Also because her parents really wanted to order take-out from the Mexican restaurant in town. They've been even more cautious than we have, not getting anything from anybody. Now, though? With infections getting close to tolerable? They wanted to indulge, but also felt that food for four people would allow for an order worth the restaurant's work.

The restaurant, it transpired, was closed for renovations. We all hope this is genuinely being closed for repairs, rather than ``closed for we'll call it renovations but never open again''. But, as with the logic of buying amusement parks, this is a good time for it. It'll be the lowest amount of in-person seating demand for years to come, after all. Yes, it would have been better still to renovate before restaurants were opened for take-out or for outdoor dining, but it might be they didn't have the capital, or couldn't find a contractor, then.

So we shifted the order to the other Mexican restaurant in town that isn't Taco Bell. That one has a specific vegetarian section to the menu, although it's got five particular combination platters that it's hard to resist ordering from. I ended up getting two bean burritos with queso fresco and the envy of

bunny_hugger's parents. We also got an extra order of refried beans on the side, which would end up redirected to Sunday lunch.

We would get maybe halfway through the new chapter in Mice and Mystics. For the first time in ages I played Filch, the Rogue, and I had a great insight or possibly rule-breaking hack. Filch has a special ability in that for turning over two pieces of cheese (the game mana) he can take another attack against opponents. And he had a bow that let him roll lots of dice, which can come up pieces of cheese, thus collecting mana. We couldn't figure out a specific game rule against using the cheese produced in this extra attack to attack again. So he got several rounds of attacks in, rather than the one attack he should have. This did great things for clearing major enemies (``minions'') off the board. Then he went and got himself captured by a roach, the puniest enemy to be faced. Furrfu.

Still, considering how much we don't use special abilities, and hoard cheese as though it's never coming back? This was a big breakthrough.

Also a breakthrough? The Masked Men. We saw a quite handsome raccoon across the street, standing in the tall grasses on the river bank. And looking back and forth several times, judging the traffic on the quiet neighborhood street, before they trotted across and along this lovely little raccoon social trail that goes past the birdfeeder and to the carport where

bunny_hugger's parents leave food for the feral cats. And, they know, the raccoons.

Gorgeous, of course, and then it got even better as another raccoon ambled along the curb, checked, and crossed the street. This second one took the same raccoon social trail across the yard --- one you see it you realize the path is so clear --- and joined the other to eat. The two stayed only a few minutes before going back to the river.

bunny_hugger's parents worried that the second might not have found anything to eat and resolved to figure out something to do about that.

Back to pictures from last week and walking around the Brenke Fish Ladder, now. 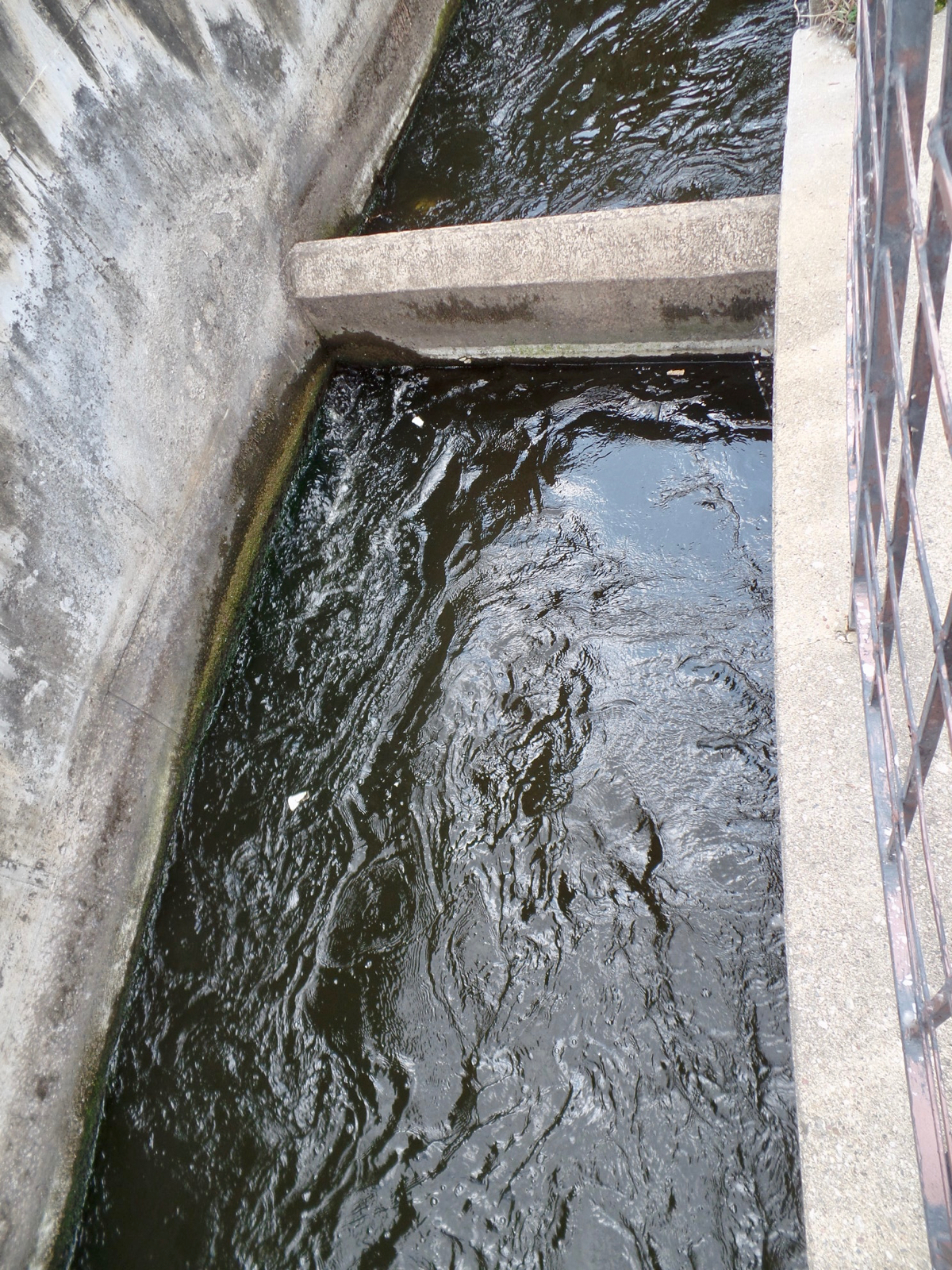 One of the tiny water drops that the fish are supposed to get over in the ladder. 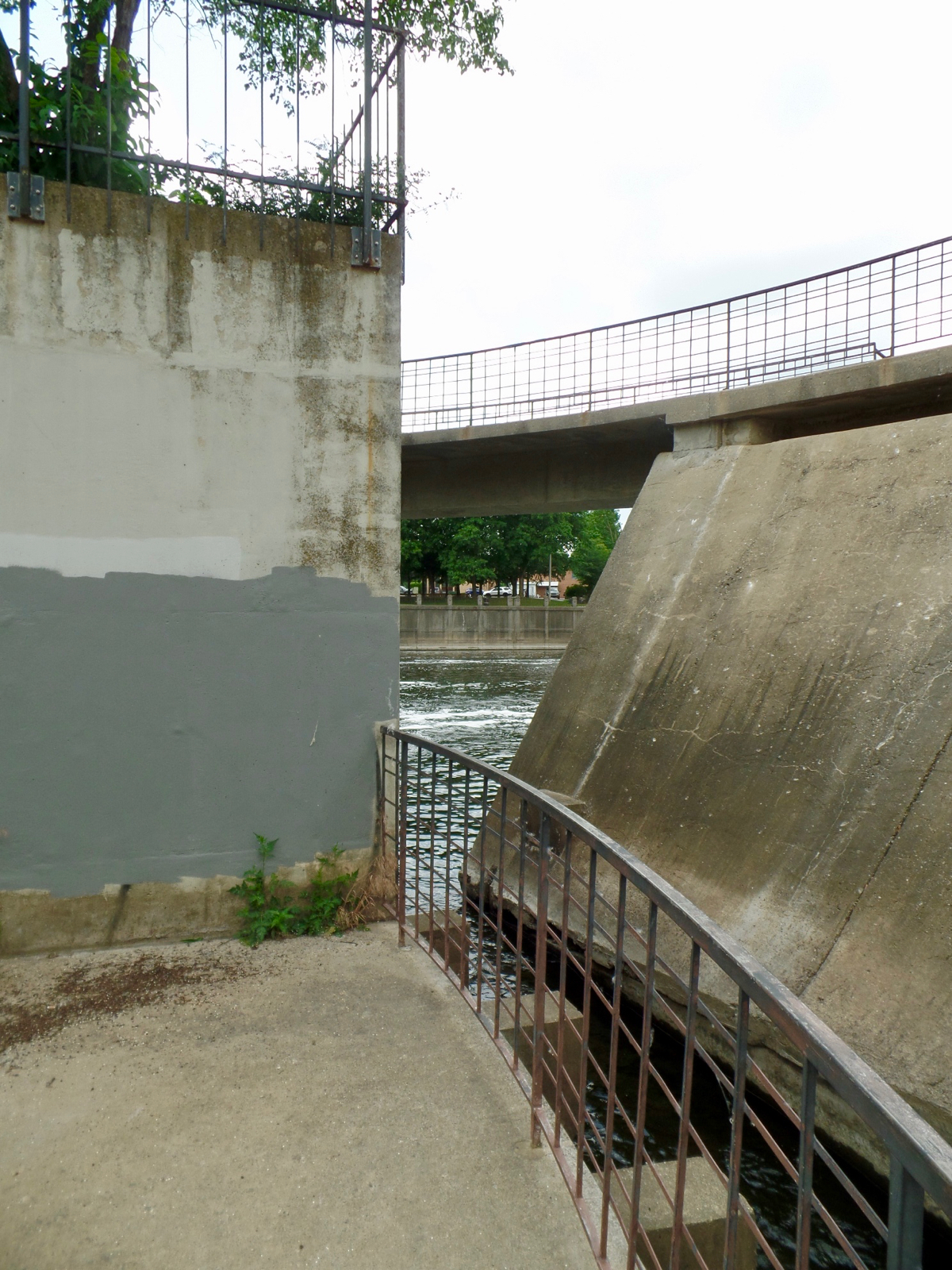 From the bottom part of the human-accessible fish ladder, looking up. 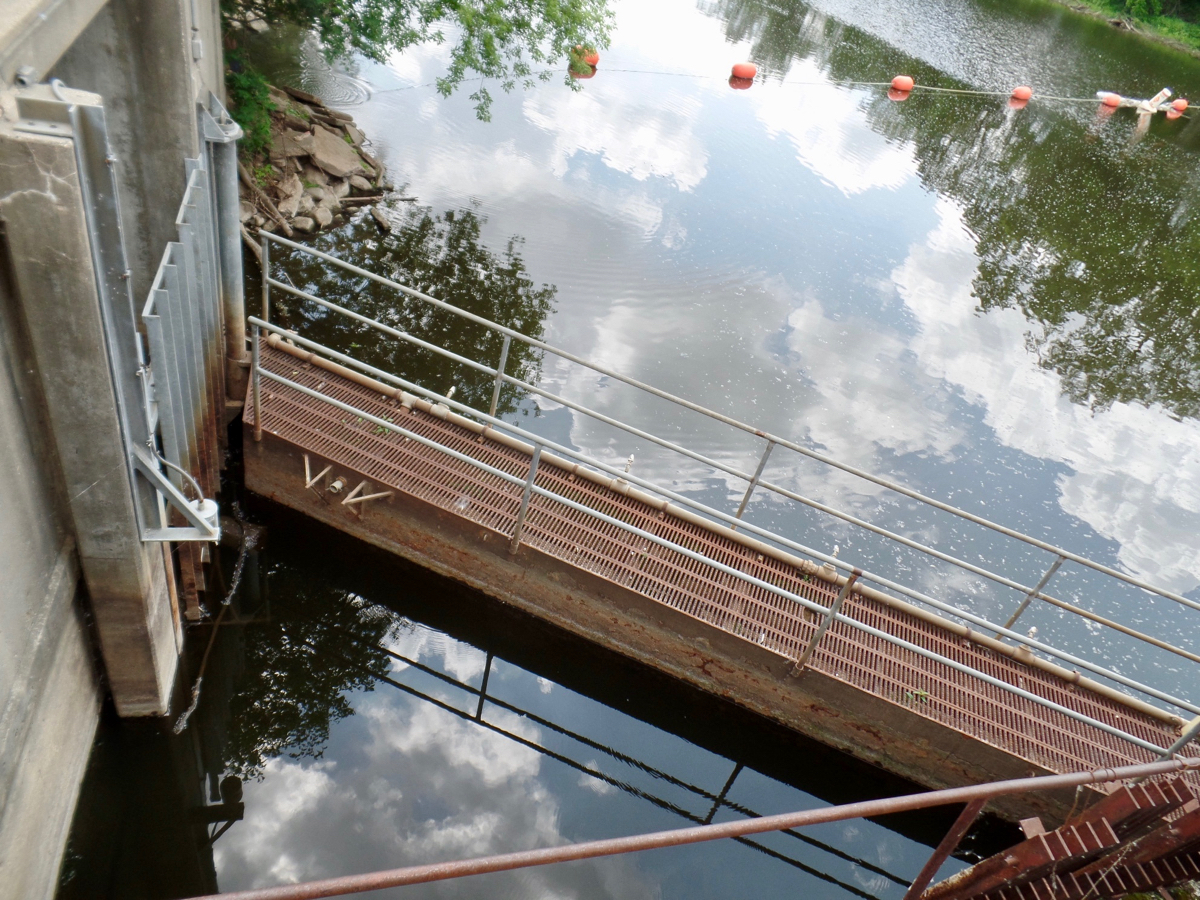 Looking down at some of the walkways to access the working parts around the dam. 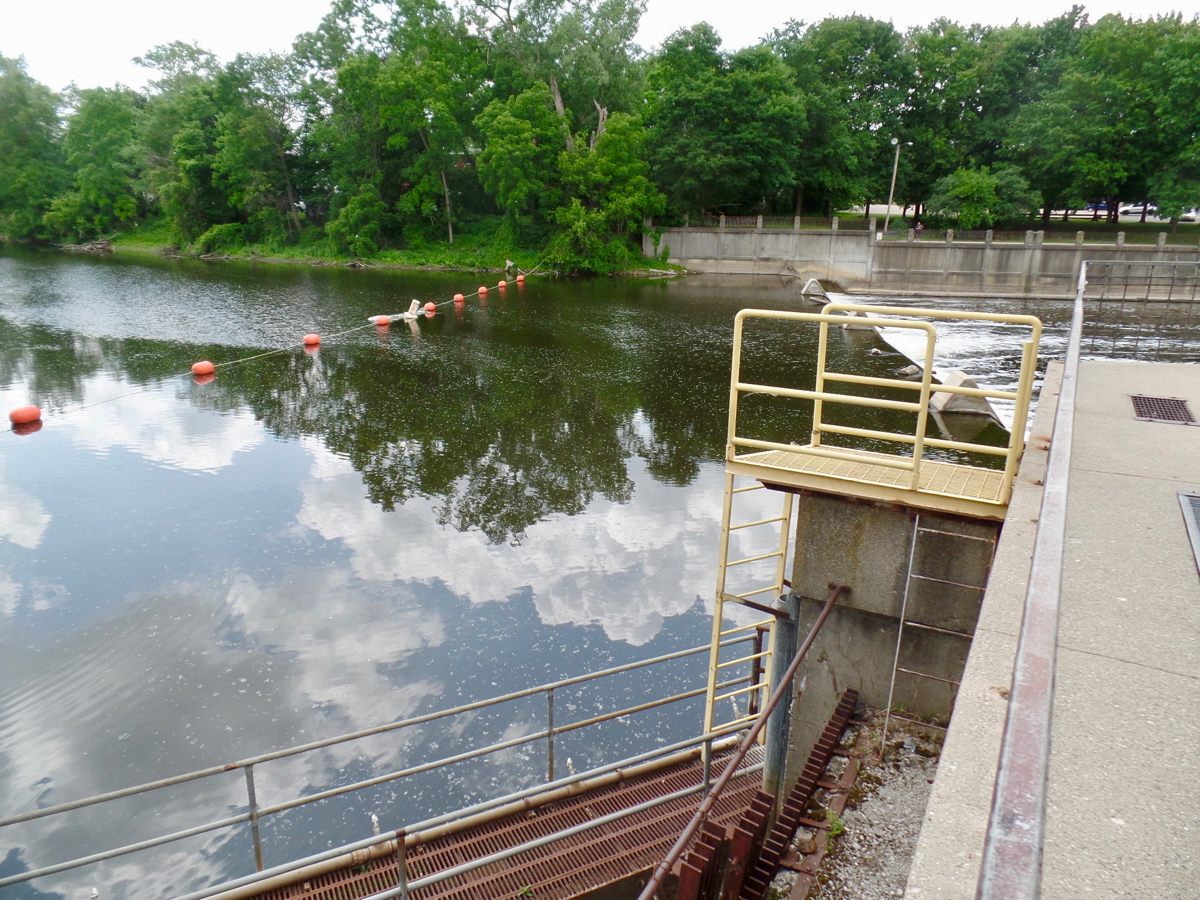 And looking from the top of the Fish Ladder out at the dam. 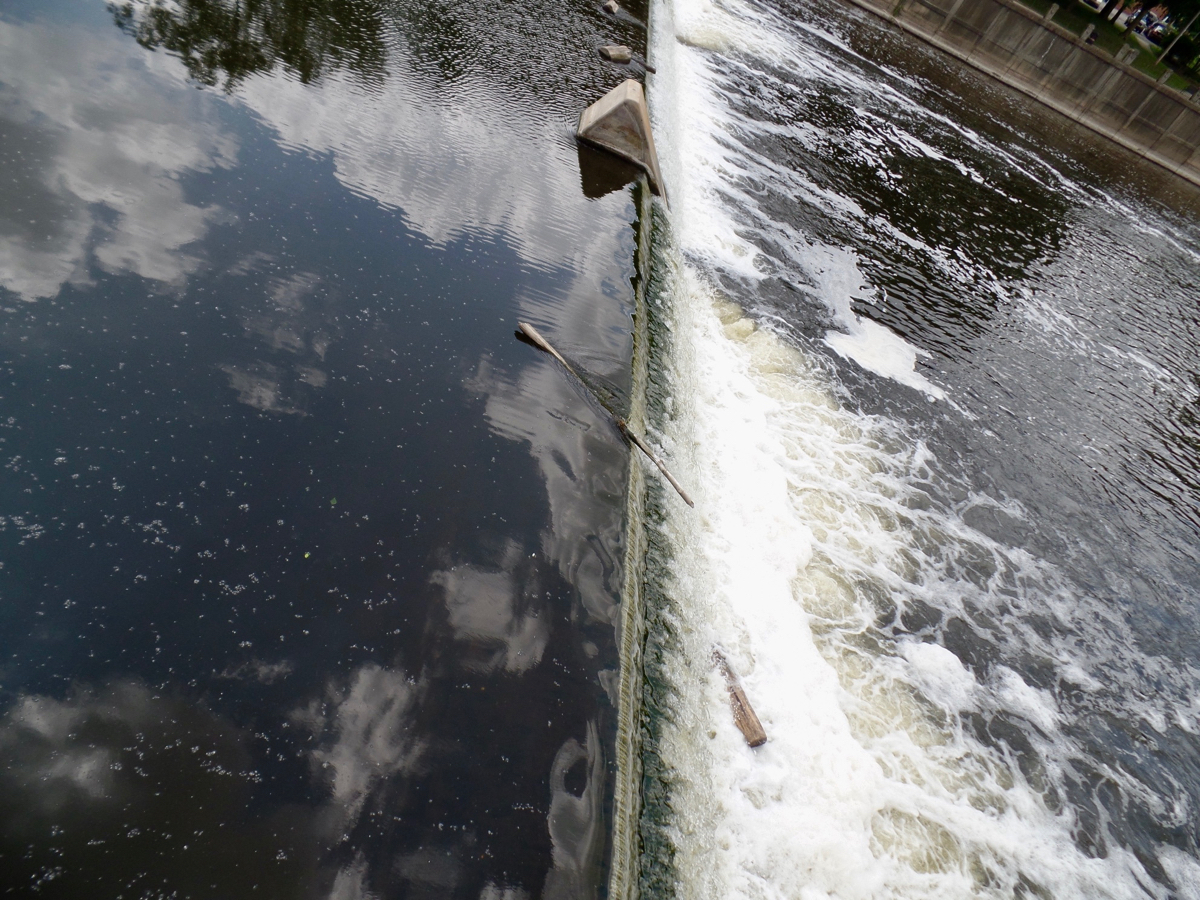 The waterfall and my album cover for this set of pictures. 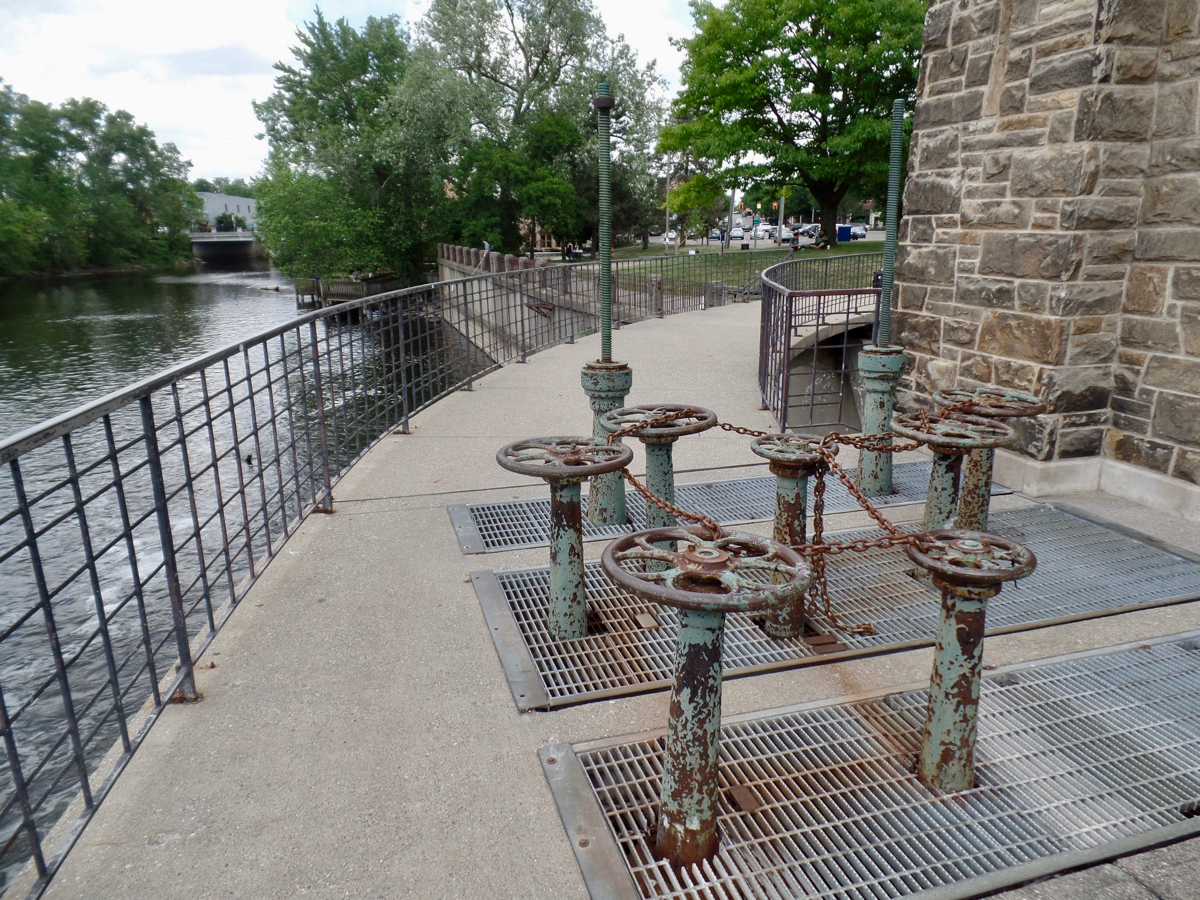 Various gears atop the dam, chained up because they know what they did.

Trivia: By 1902 Germany had built 327 monuments to the Emperor William I. (Within the year after Bismarck's 1898 death some 470 municipalities had built ``Bismarck Columns''.) Source: The Invention of Tradition, Editors Eric Hobsbawm, Terence Ranger.