So that all got exciting. After several days of rain we got heavy rain. And, during afternoon coffee break, even heavier rain, plus a tornado warning. That's the one where a tornado is actually spotted. The one that gets a National Weather Service note of 'TAKE COVER NOW' on Weather Underground. We closed the windows and took plants off the windowsills, and got our pet rabbit's carrier up from the basement in case we needed to evacuate her fast. Also I closed the door to her hutch, so she couldn't hide inside if I had seconds to grab her.

And then got to watching Channel 6's weather guys on the Internet. Our satellite TV was right out. This was three weather guys, doing a sometimes unintentionally funny bit of severe-storm-watching. This included wrestling with their excitement at seeing tornados come together and oh, yeah, that thing where tornados can hurt or kill people and we don't want that. Also, sometimes, getting into little struggles over who's controlling the computer and how to get it to show what they want. At one point Jim Geyer, the one who does roller coasters, was trying to click something and Other Weather Guy explained how he had to hit the function key and why don't I come over and help you and maybe don't touch the buttons and we'll get that up later.

The first storm, the one that turned into a visually spotted tornado, was also aimed at the metro Lansing area and that's when I started tweeting about things. Also when the city started the tornado siren, a thing they kept going for a good half-hour or so. This first storm was the most nerve-wracking for me, who's never been in a tornado, and for

bunny_hugger, who never wants to be. It was the one closest to hitting us: the intersection of superhighways that's the best guide to our house was right along the outer edge of the probable path cone, at one point. This tornado, it appears, lifted off the ground so as to be minimally damaging for its power, and passed through East Lansing on its way toward Flint. We didn't get any worse than heavy rain.

There were a couple more potential tornadoes, but the weather guys said they were ``having trouble getting organized'', to which

bunny_hugger said her too. They never did organize into anything particularly dangerous, though.

bunny_hugger's parents' town. The weather guys even used the college athletic center near their home as a landmark. (Another landmark used was labelled 'City Limits' and at one point they established that oh, yes, this was the City Limits Bowling Alley.) That, too, passed without getting organized (in that town, anyway), and the weather guys signed off their live-streaming at least.

And so that's the weather event we had today, and that preempted things like my little chat about testing whether our sump pumps were working. They were, but we hadn't heard them after several days of steady rain. They were bone dry inside, is the thing, so we have to suppose that the nearly rainless autumn, the light snow of winter, and the until-this-week-rainless spring left the ground so parched that four days of rain hadn't soaked it enough that much was coming into our basement. But after this, which the airport said was about one and three-quarters inches of rain delivered in two hours? It's running like we expect now.

Now let's look back to the quiet days of a week ago when I walked around downtown. 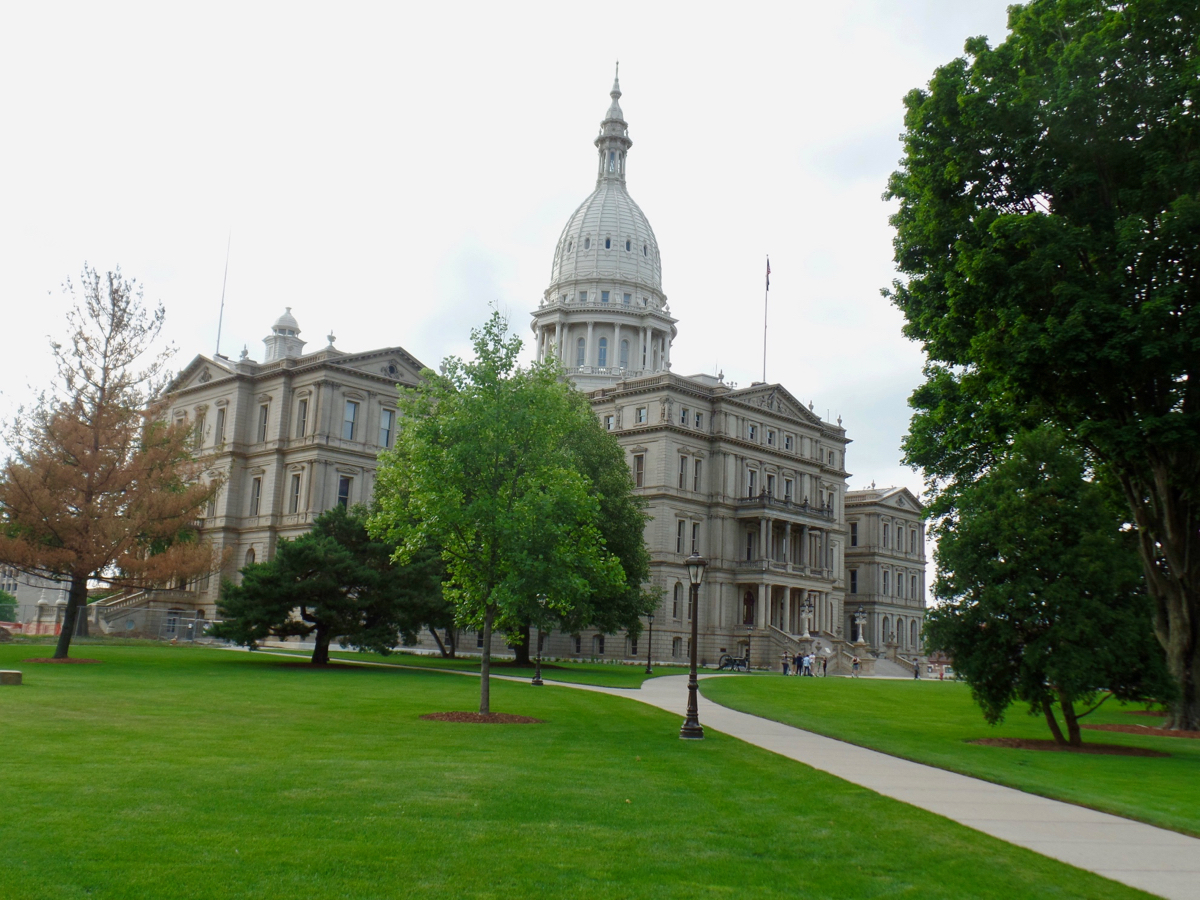 View of the state capitol from the southwest corner. 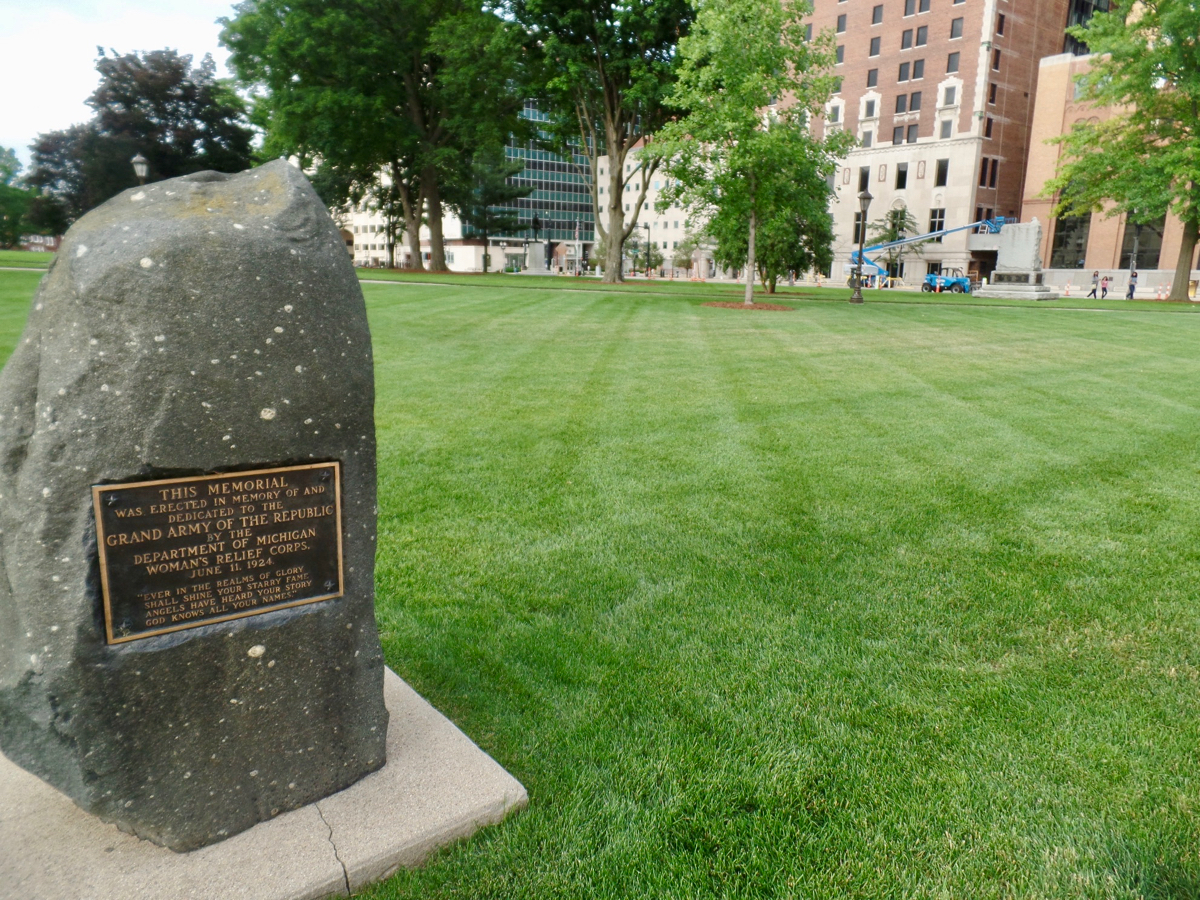 A stone on the south side of the capitol grounds, dedicated to the Grand Army of the Republic. 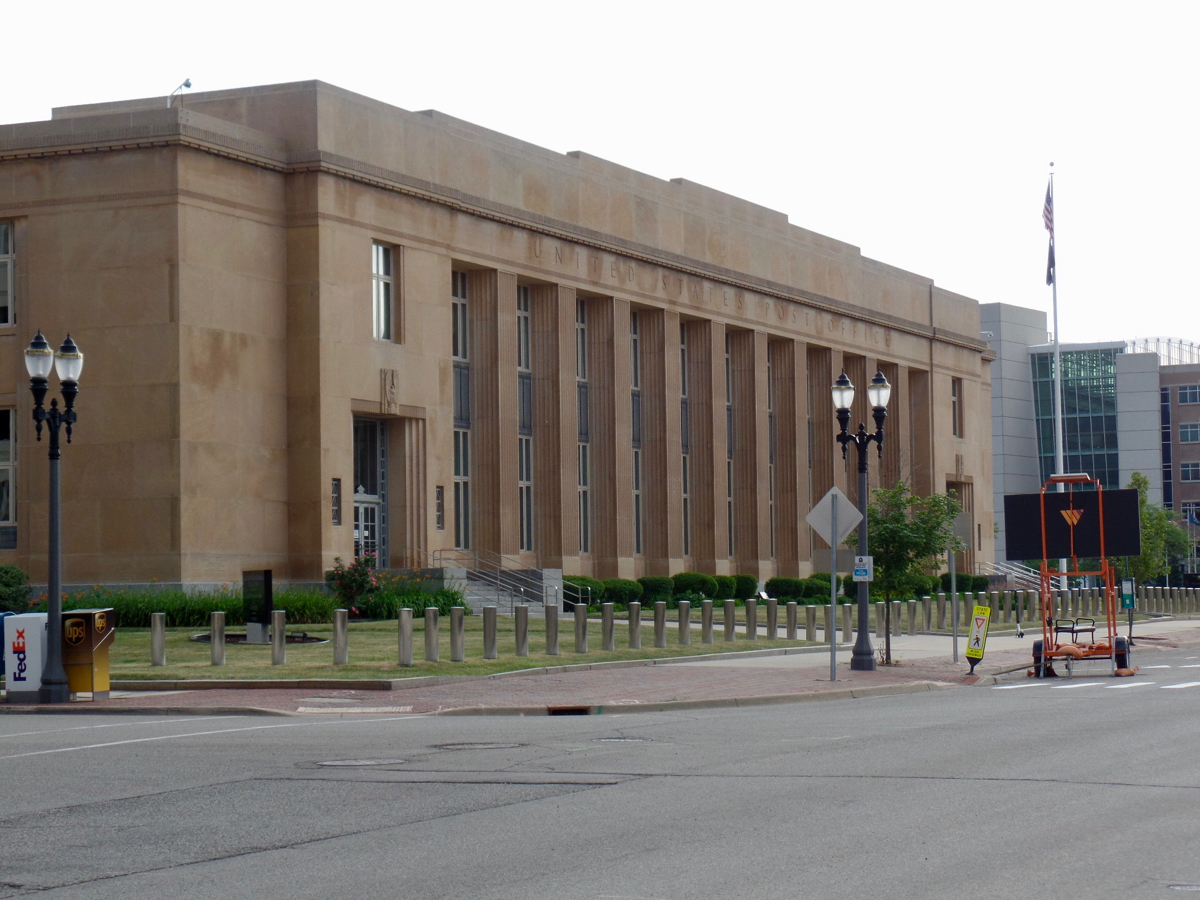 Across the street is the US Post Office building. I don't know that we've ever used it for mailing anything, though. There's a much bigger facility just a little out of town that's got the counter open an hour later and you don't have to use a parking meter. 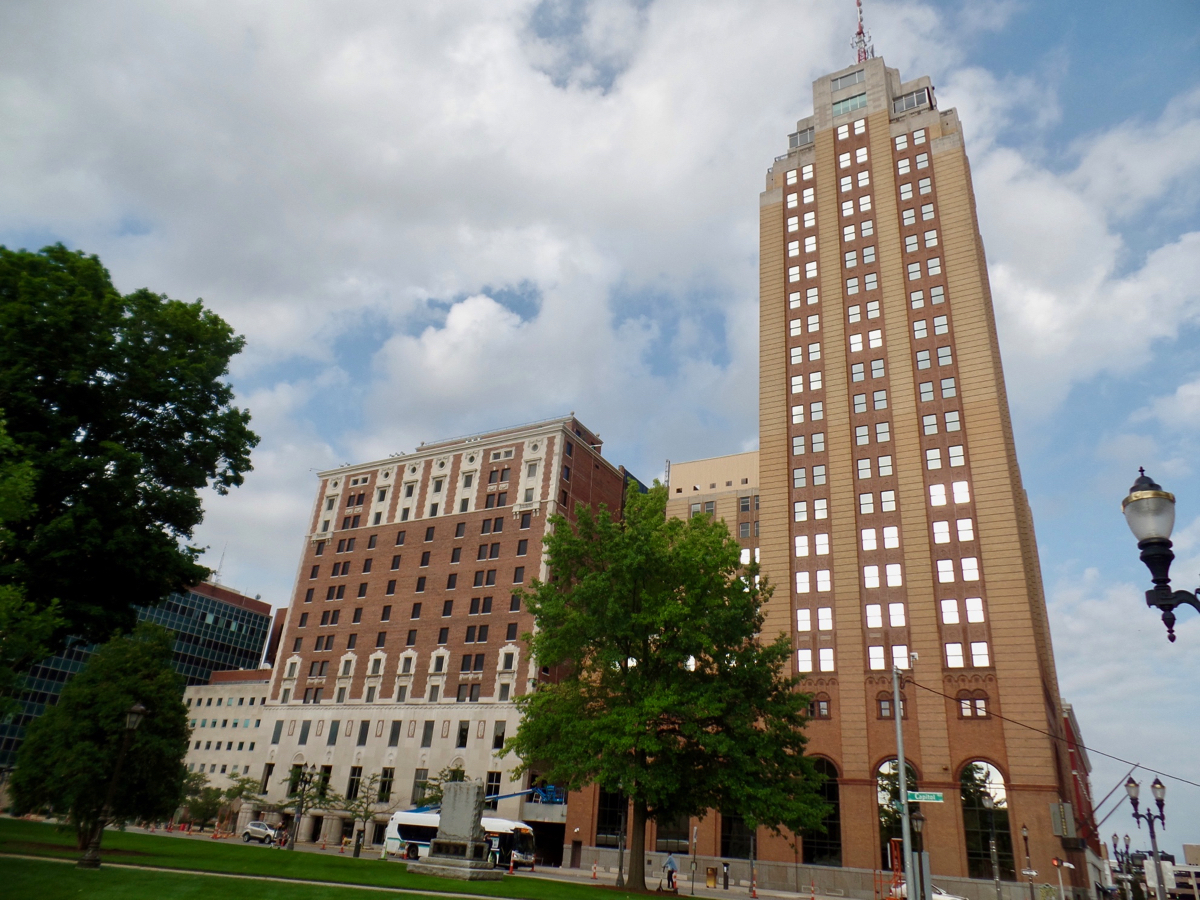 Boji Tower and, to its left, the George Romney State Office Building, formerly the Jack Tar Hotel, and before that the Hotel Olds. 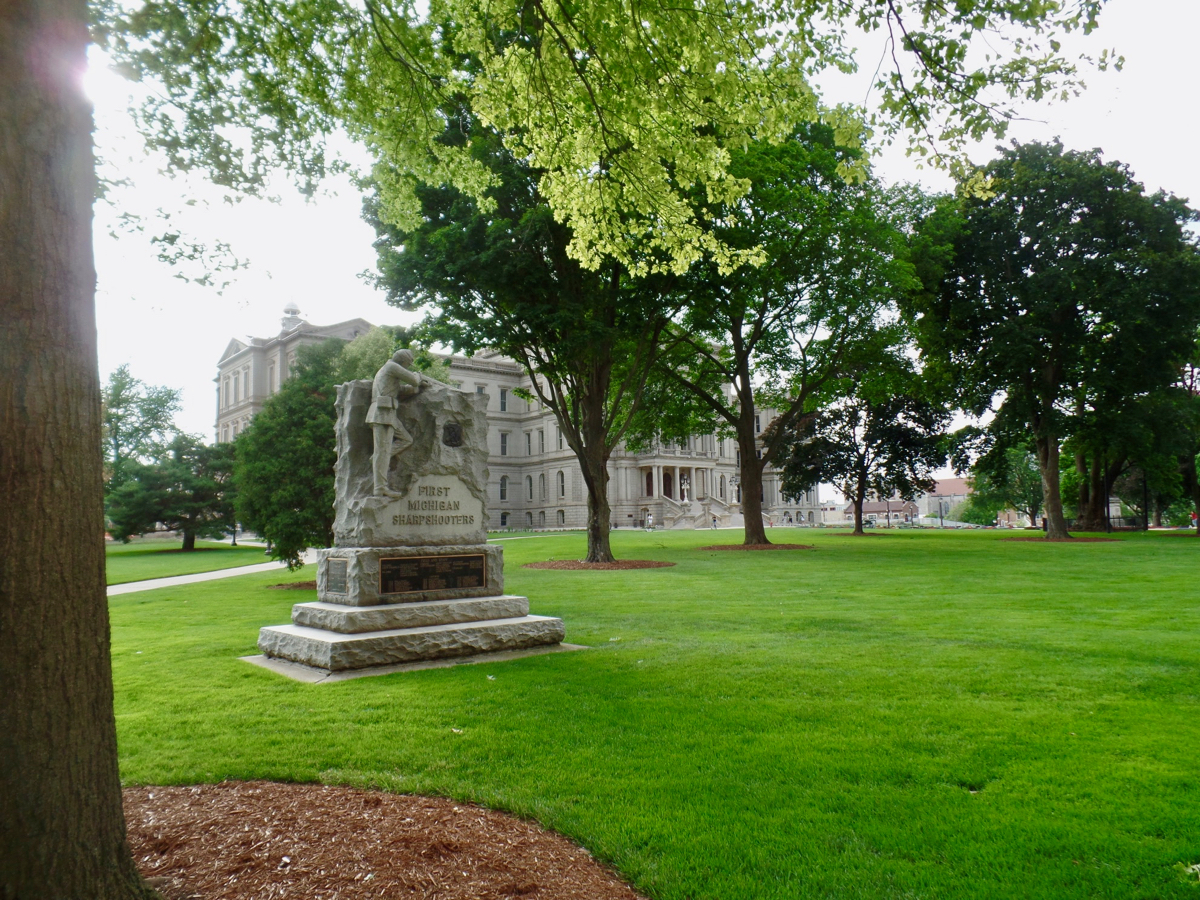 More of the state capitol, here showing off a monument to the 1st Michigan Sharpshooters, apparently taking aim at the Central United Methodist Church on the north side of the capitol grounds.

Trivia: The President's Advisory Committee on Weather Control was established in the United States in 1953. Source: The Culture of Calamity: Disaster and the Making of Modern America, Kevin Rozario. And, obviously, there's reasons weather control isn't practical, but how's this for a killer alternate history: developments in chaos theory allow for the identification of methods within human control that bring, at least, the weather-for-the-next-week tolerably near what the Federal Director of Weather Services wants ... but also it's 1948 and the Director is Robert Moses. (Don't ding me that ``chaos theory'' was not a thing that early; first of all, Henri Poincaré, second, alternate history.)