As we exited Gemini someone stopped me to talk about ``that park in New Hampshire''. I was confused but put it together. I was wearing my bright yellow Canobie Lake Park t-shirt, and hey, someone recognized the distant small park I was representing! That's heartening. They were wondering what it was like and I gave my happy report, including the news about its pinball from when we visited five years ago. That made it only the better in his eyes.

We took our walk to the front of the park seriously, noticing along the way that Top Thrill Dragster was somehow running, even though there had been weather that day. Windseeker was also running, against all precedent. We marched to the front of the park, around a solid mile's walk, and took another ride on the Midway Carousel. Then we scouted out a spot to wait, and wait, and wait.

Our wait was for the 150th Anniversary Parade, which we knew would follow a path running along the main midway. And we knew when it should start, but not how long it would take to get to our spot Turned out to be a good half-hour or so. Had we suspected we'd have gone to the nearby Raptor and ridden it; that roller coaster has pretty good capacity and boasted short lines every time it was running. But finally came the parade, and ...

Oh but goodness was it worth it.

The song, cycled over and over, was about how at Cedar Point or for anyone with ADHD who has projects, the fun is just beginning. The floats came out and stopped for dancers to show their stuff. The dancers were dressed in a copule eras of old-time costumes, the most prominent ones being Like 1910s or so. But there were more, many more. The floats represented moments in park history. One was meant to evoke the Cedar Point entrance gate of the 60s and 70s, with a recreation of the lighted signs within. One was a model of this swing ride in a much-used early 20th century picture. It's of a swing ride, spinning passengers around, but over the ocean, with the twist being that (I believe) you could drop off into the surf, which seems fun. Can't imagine wy they don't do it anymore. There were two floats that held replicas of Cedar Downs's building, with replicas of the racing carousel horses on top and people riding those. Another was a float representing the Hotel Breakers. There was one for roller coasters, including a twisty track that stunt performers skated onto and off of. There was a float for the midway games, including a prominent display of Fascination's logo.

Cedar Point's been on a nostalgia kick, and showing a lot of the Fascination parlor they took out twenty years ago to put in a Johnny Rocket's. It seems a little odd to remind people so much about a once-beloved, now-gone, and completely irreplaceable attraction. (Fascination, a kind of bingo-type game played by rolling balls down a long alley, requires electrical relays not made since the 40s. Any installations that still exist do it by cannibalizing parts from removed ones.) On the other hand ... like ... if you wanted you could put in a modern Fascination-like game. You'd need bowling-alley-grade smooth wood, and 25 holes, and optical sensors on each hole, and a computer attached. You could replace all the complex relays with a bit of Javascript. But that would be daft to do, right? ... Hm.

That mystery to the side. We kept smiling, more and more, as each float came by. The parade was magnificent, wonderful and hilarious and over the top in all the right ways. We've got to get back to Cedar Point before the season ends so we can see it again. It's just that good. This alone might have justified the eight hours of driving for the day.

Speaking of the day: it was nearly over. It was maybe 9:15 by the time the parade left us behind and that meant we had under an hour left, since Cedar Point has been on short hours since reopening in the pandemic. Raptor, the coaster we were next to, promised an under-15-minute wait and was even shorter than that. It wasn't quite a walk-on, but was near enough. I had hopes for this, because of my hair.

I haven't had a haircut since the end of February 2020. My hair's taken on this great volume. If I treat it right it can produce this halo of brown and grey around me. I have been eager to see what it looks like after an intense roller coaster ride. Mine Ride isn't intense at all and Gemini, though fun, hasn't got, like, loops or the sudden whips around that really get your hair crazy. Or an on-ride camera. Raptor has all that.

Unfortunately, between the rain and the humidity and all that my hair never really dried out the way it needs to become voluminous. And Raptor's on-ride camera booth was closed. They were still taking pictures, and showing them on the monitors. But the monitor with my picture was broken. Were the booth open it would've been easy to at least see what my hair was doing, if it were doing anything good. Too bad; we'll have to wait for another park visit.

Blue Streak was running, and so there we ran (well, walked), and that too was a walk-on. The ride op at the end of the queue also mentioned my Canobie Lake Park t-shirt and her hope to get there someday, so the shirt was a great success by any standard. And so finally, finally, we got to ride a wooden coaster.

To avoid repeating old mistakes we went to the souvenir shop, picking up a new brass Christmas tree ornament and, for me, a model of the WildCat roller coaster taken out under mysterious circumstances in 2012. Also a park map; I'd seen a few maps in the gift shops all day but hadn't yet grabbed one. The shop also had a nice-looking book about the sesquicentennial (as opposed to the book about all 150 years of the park history) but with no hint what the price was I wasn't picking that up.

With the last bit of time we went to the nearest carousel, Cedar Downs, for our last ride of the night. And the racing carousel's last ride, too; they closed the gate behind us.

We hadn't yet eaten but had supposed that was all right, they'd be slow to close the food stands. They were. But the food stands were also packed by many, many people who had the same idea. We got our cheese on a stick, finally, and fresh-made, which does mean we had to wait about seven minutes for them to fry up. That's all right; while I waited for the fried cheese,

bunny_hugger went to the Freestyle Coke line where it turned out there were one and a half machines that had anything left, and everybody was trying to squeeze something out of there. (The half- is because one of the machines was responding to button presses only about half the time.) So she spent nearly as long getting some Fresca Zero as I did waiting for cheese. And then of course I had to join the queue for my pop and that took even longer as people gave up on the half-working machine. If I were more courageous I'd have jumped on that and tried out the alternate accessibility buttons on the bottom of the machine.

We sat on a park bench to eat, since breaded fried cheese isn't really a driving food, as the park continued to empty out. And realized too late we weren't going to get a night photograph of the 150 Years sign in front of the lit Midway Carousel. The carousel had been dark since before we even got our food. But the bright sign against the dark carousel is also an interesting composition. Might make an album cover someday next week.

And then our anniversary trip to Cedar Point was done! We drove home, listening to Greatest Generation,

bunny_hugger nodding off (which is fine) but waking up to laugh at the occasional joke and not getting the plot of the episode where the Deep Space Nine gang has to play baseball against some mean Vulcans. I promise, that's what they said happened.

And that, friends, was last Wednesday for us.

Now let me go back several hours and show some pictures of it all. 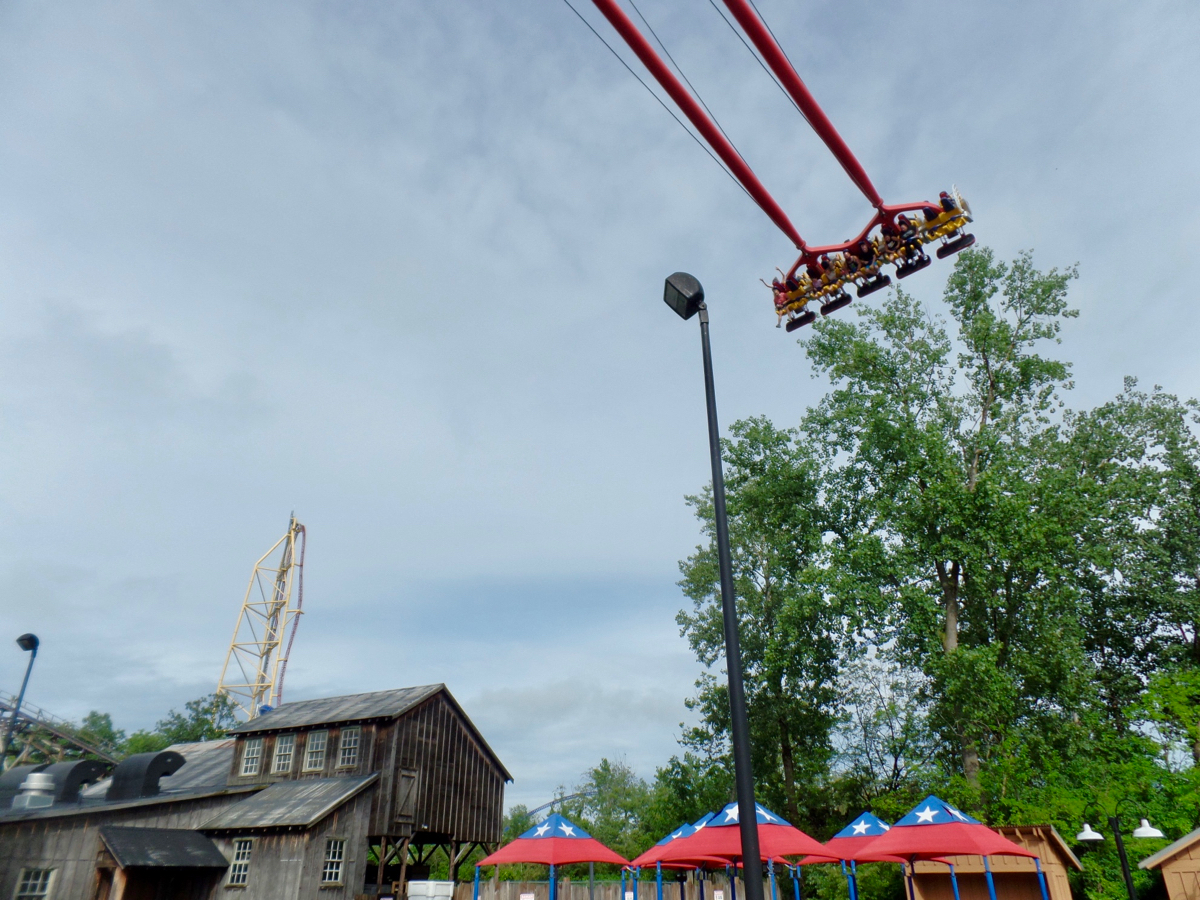 SkyHawk on one of its broader swings. It doesn't quite take you upside-down, but it feels like it, and you get little bits of floating in zero-gee which is great fun. 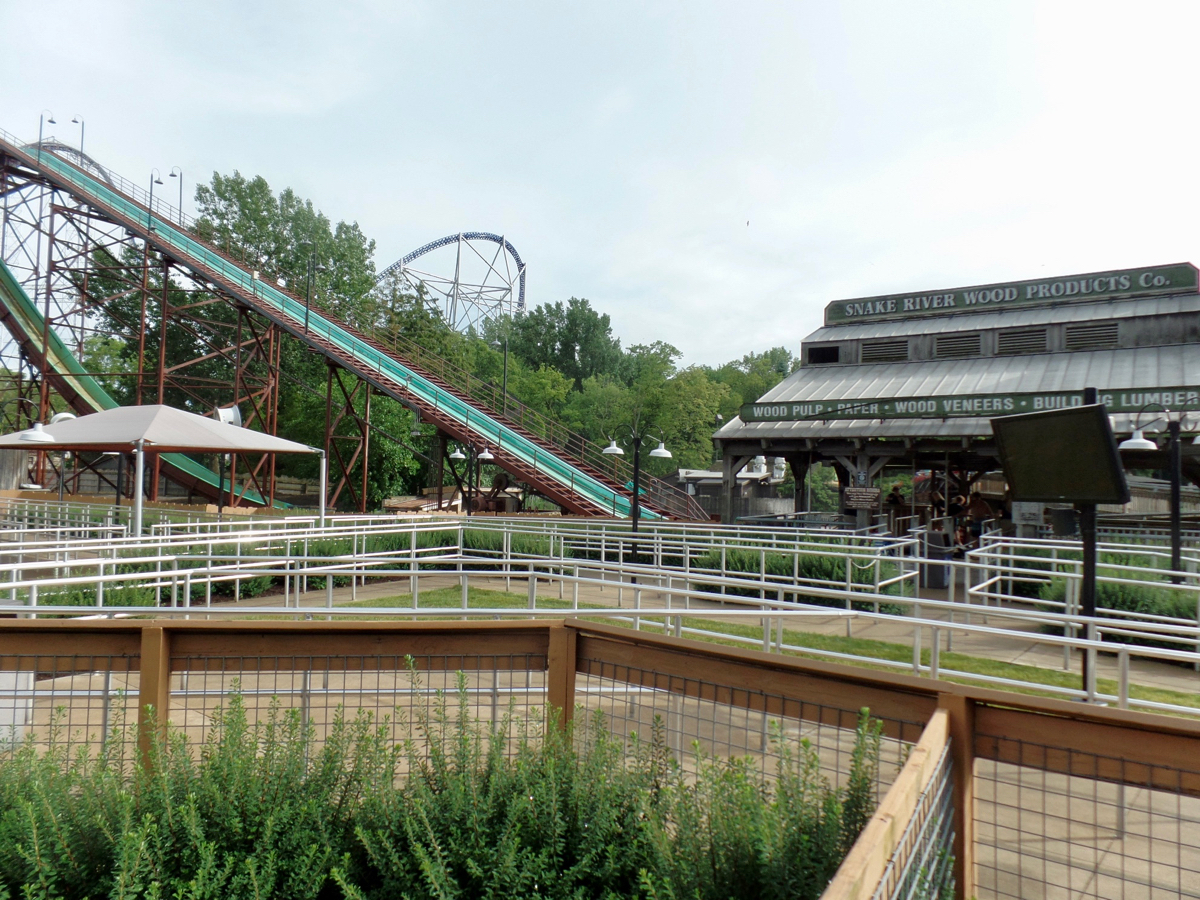 A look over at the Snake River Falls shoot-the-chutes ride. I don't remember noticing anyone on it but it wouldn't have been daft to ride; it wasn't that cool, once the rain was past. 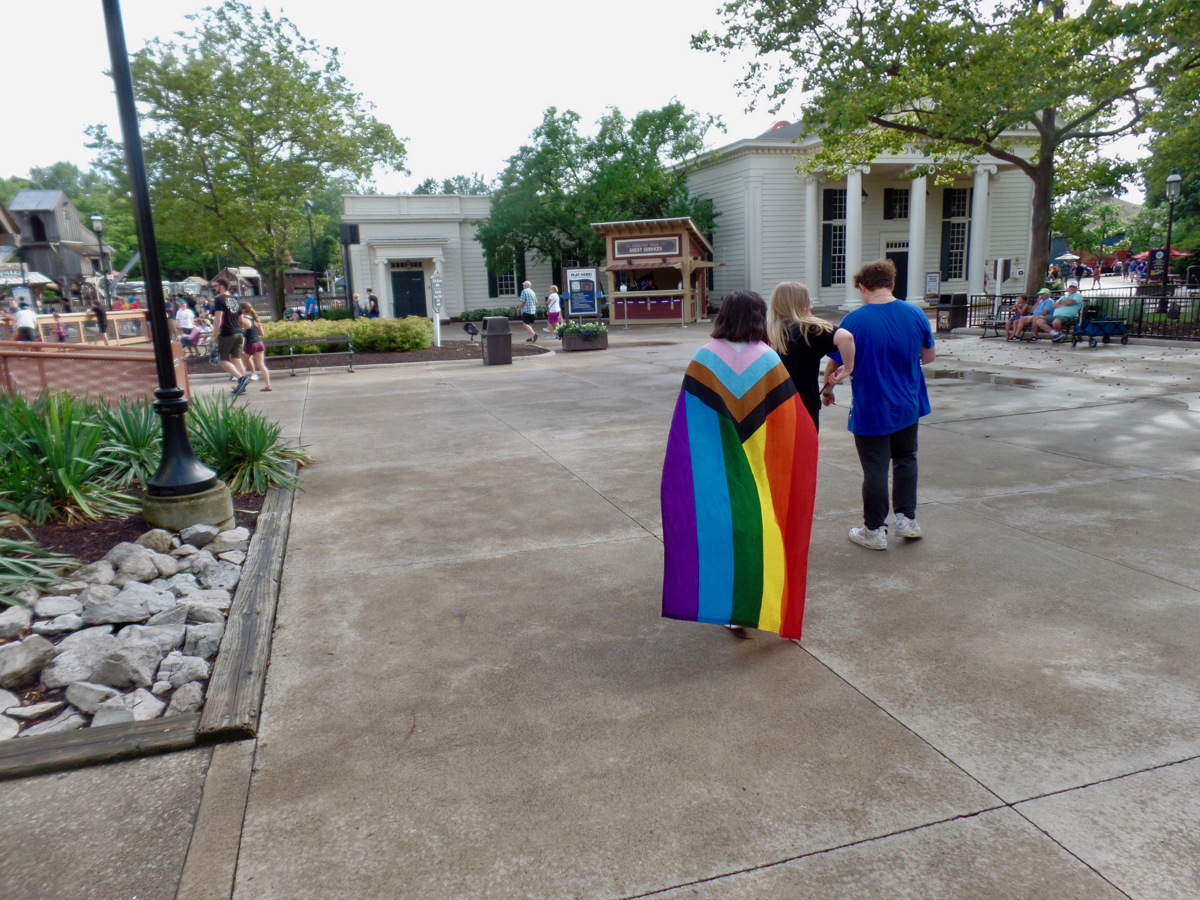 There were at least two people wearing pride flags as capes. 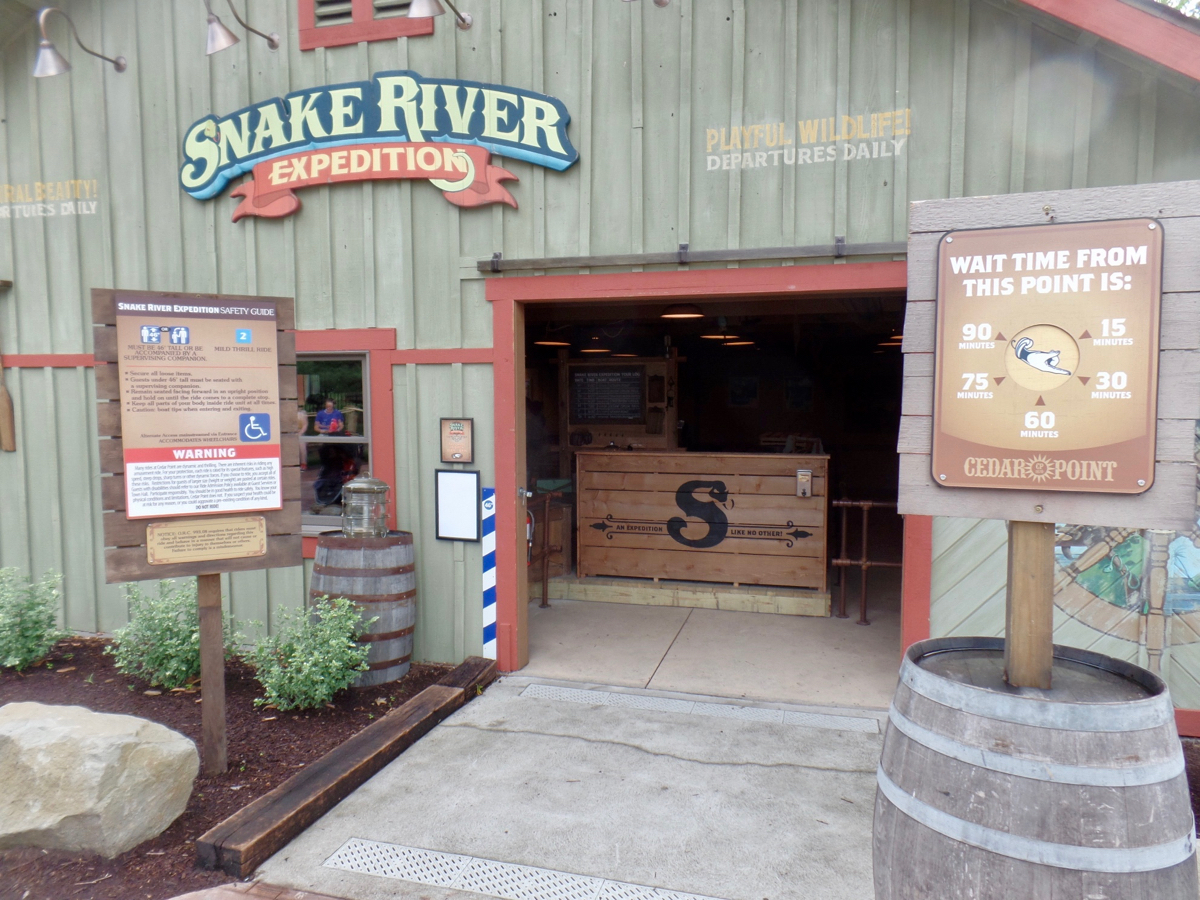 Entrance room to the Snake River Expedition. Turns out there's a second queue room off to the side of this, so they have a lot of capacity to make people wait around. 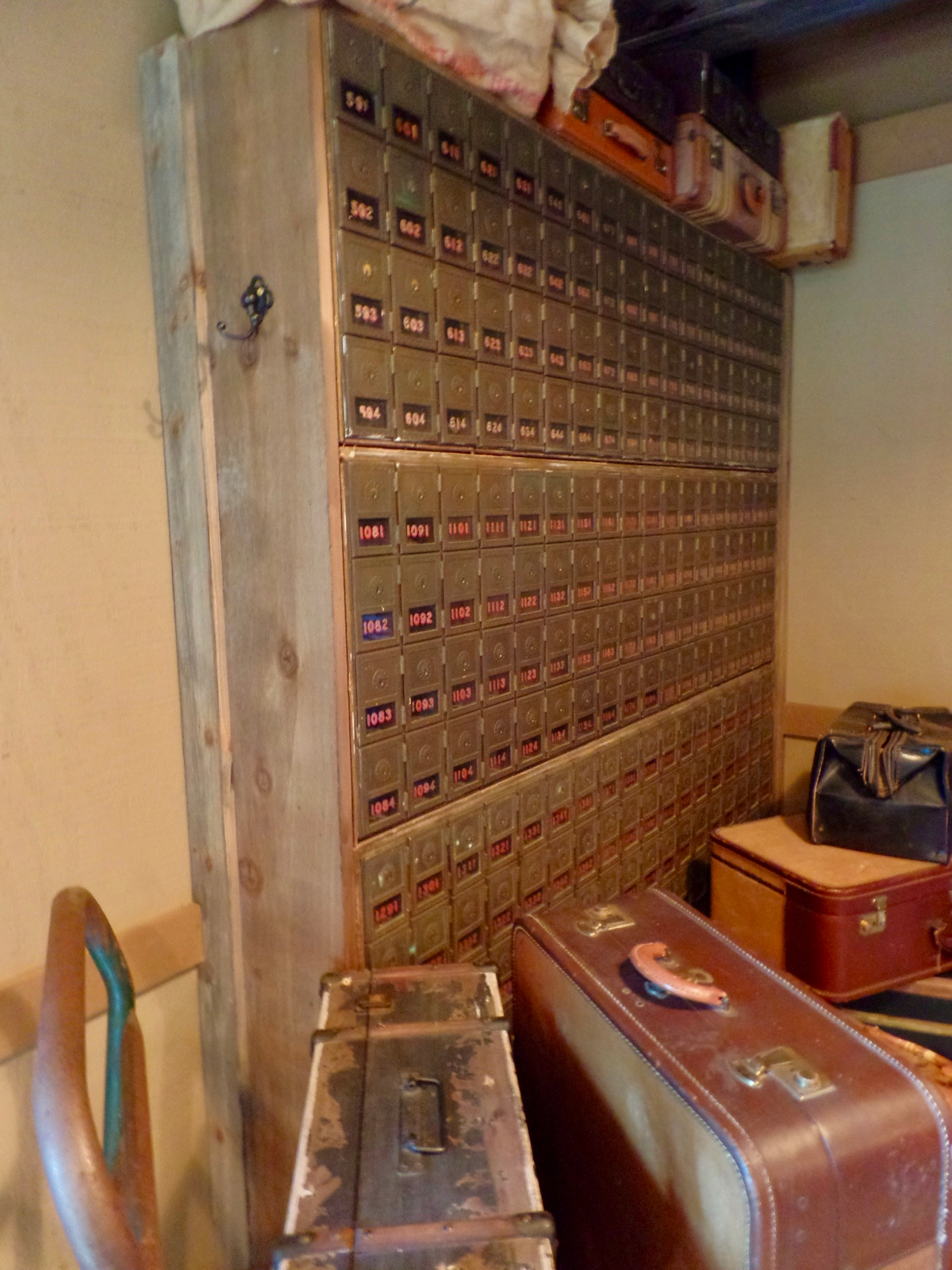 The post office boxes are formerly from the Town Hall Museum, and I hope that the park has records so that when Snake River Expedition is someday decommissioned they don't mistake this for just props. I have no information about where the provenance of the luggage. 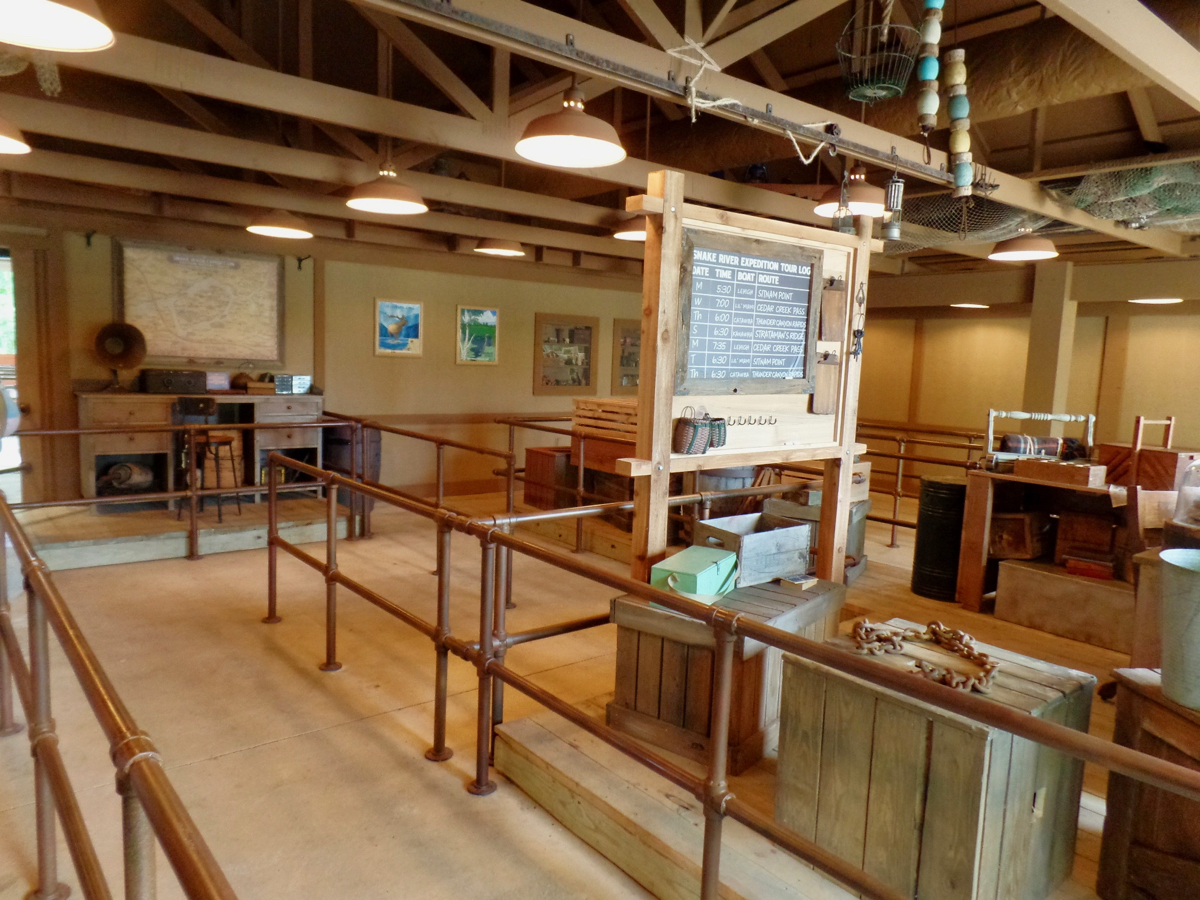 Queue area. There's a suspiciously-neat chalkboard with departure schedule, and you can see a map that loosely matches the actual terrain on the left there. Plus WPA-style travel posters which suggests things about the nominal date of the old west town this is in, but, what the heck. It's not like one time is ever wholly a single time.

Trivia: The popularity of radium-painted watch and clock faces was driven by the Great War, and soldiers' need for watches --- specifically wristwatches; pocket watches fell out --- that could be read by night without a light source bright enough for enemies to use as a target. Source: The Poisoner's Handbook: Murder and the Birth of Forensic Medicine in Jazz Age New York, Deborah Blum.

Currently Reading: Lost Popeye Zine, Sundays Supplement, Volume 1: 1938 - 1939. Tom Sims, Doc Winner, Bela Zaboly. Editor Stephanie Noell. They're mostly disconnected Sunday panels but occasionally a story breaks out, usually with Wimpy as the protagonist. He flirts with a lot of women, with a lot of talk about potential marriage, although it's also all in the service of getting himself fed.