Time may change me

Sunday was 16 months since the last time we played pinball on location, in this case in the local hipster bar up the street from our house. The Lansing Pinball League location. It should have been the end of that pandemic-induced hiatus, too, as we needed to test games. As part of the stumbling back towards non-abnormalcy we had our first, unofficial, pinball tournament to prepare.

What we forgot was to check that the bar was open Sundays. It's not a sports bar, so Sundays are always the slowest day. So it's the day to close if there's any reason, including conserving staff hours. This was a mild inconvenience in forcing us to compress our game-testing and preparation. Also since

bunny_hugger decided it should be pin-golf we couldn't avoid the testing and preparation.

In pin-golf the goal is not (normally) to score points. It's to achieve some objective, like, getting a particular game mode started, or lighting an extra ball, or something like that. These are always things you usually do during a game anyway, if it lasts long enough, but in making them pin-golf objectives you totally distort the way people think of playing, as you try to do them in as few ball plunges as possible. So we're challenged to figure out objectives that are in principle doable on a single ball, that are going to be a bit challenging, but fun to try achieving. To some extent, it's impossible to have a pin-golf objective that's too easy. ``Drain the ball'' would, some matches, be impossible to do in under three balls. But there's no working out what hits that good spot of challenging but not impossible without actual time on the actual machines.

And some players really wanted to know what the machines were, and what the objectives would be, so we put together a provisional list and hoped our testing on Monday would turn up no big problems.

Our first trip inside was ... weird. They were checking IDs, unusual, but waved us through without checking, usual for when they do that. We wore our masks and were in a clear minority, although I noticed some of the staff still masked up. Our county's at 1.5 infections per 100,000 per day. I don't know what level will feel safe to be indoors maskless but I think under 1.0 certainly.

Some of our friends were there! Including RED, PHD, and HMZ, the last an extremely happy surprise as we just never saw him anymore even before the pandemic. PHD said he intended to rejoin league, but HMZ was reluctant, citing how long league takes and how non-competitive he is. I hope he can come hang out anyway. He's got a rare talent in helping

bunny_hugger appreciate how having a lousy night of pinball does not make her a lousy person. We got to chat a while and it felt weird but also normal and like it had been twenty years and also twenty minutes.

The bar itself was changed some. Pinball games were rearranged so that, yes, even more could fit in. The pinball databases list there as being 35 tables in this one barcade and that's crazy. There weren't 35 tables in all of Rutgers University when I went there in the early 90s and there was a pinball row in every one of five student centers. Also crazy: the bar was carpeted! Not quite everywhere, but most of the place. Good for sound absorption, I imagine, and resisting people sliding pinball machines all over the floor, but this is a bar and a restaurant. To put carpets is an act of confidence or foolishness.

The biggest surprise of the night: some of our high scores were still on the tables! In fact the grand champion score that I set in the just-past-midnight hours of the 11th of March 2020, was still on the Beatles. It's not that high a score, considering, and I'm startled it wasn't just wiped and reset, as operators will sometimes do. (Games are sometimes set to wipe the high score automatically, although not the Grand Championship, for reasons that escape me.)

We played out the course for the small tournament, and changed one of the objectives that turned out to just be too hard. And then karaoke was under way, and it was getting late, and we figured we were better off going home, and eating, and getting ready for everything Tuesday would be.

You know what was no problem at all? The end of the Snake River Expedition. Enjoy the sights! 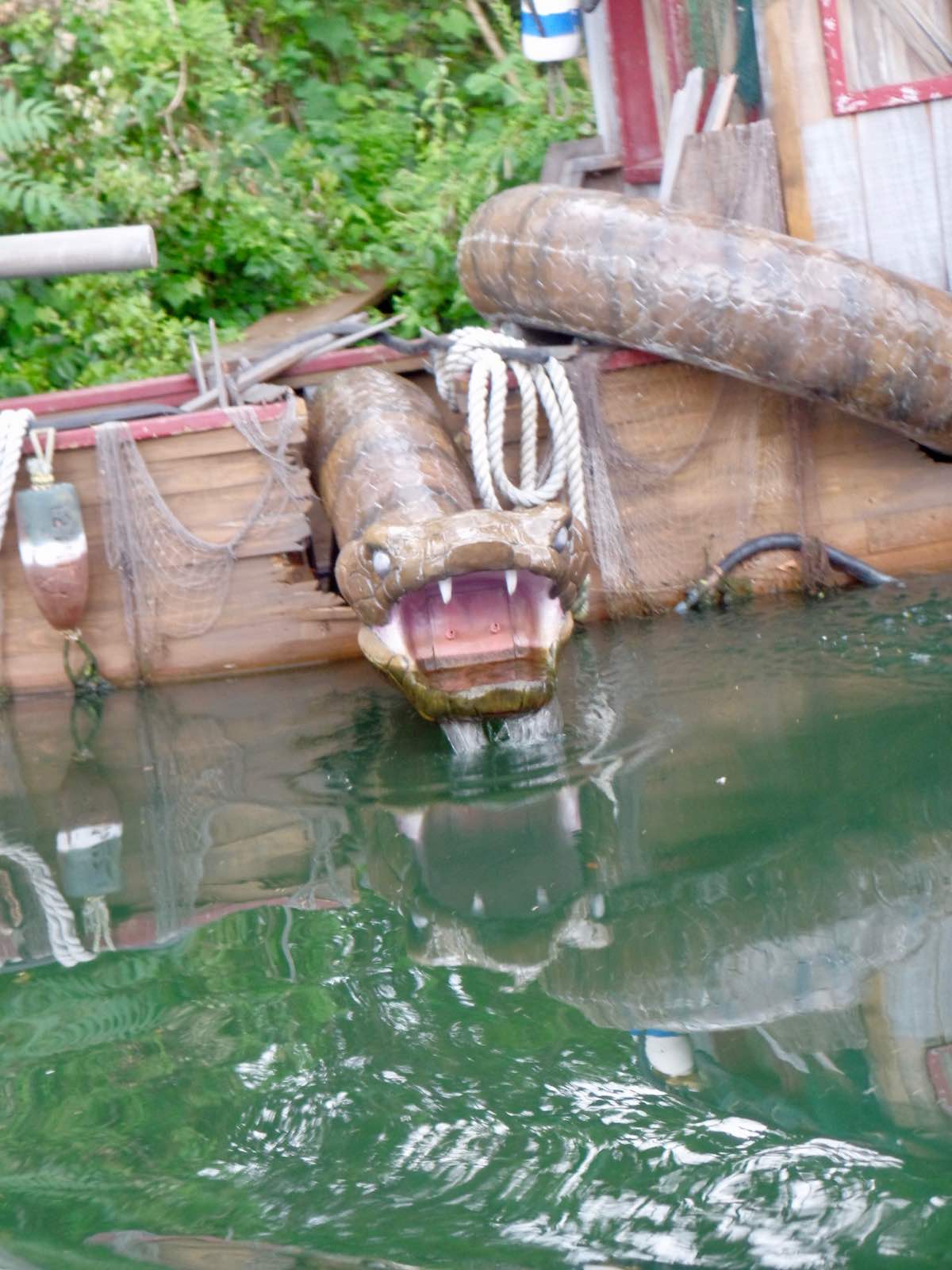 Look, a basilisk! They say. Looks like a big serpent to me. 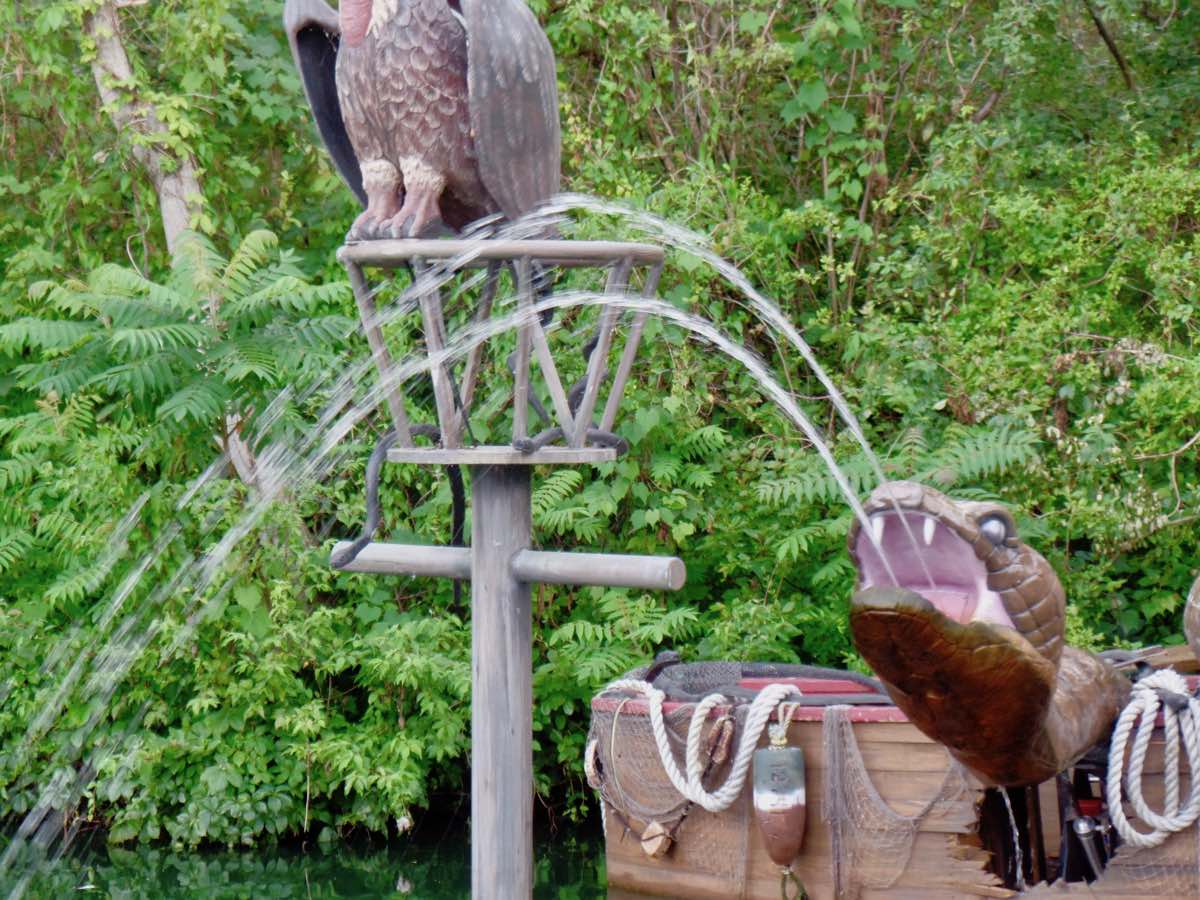 The basilisk blasts the ... wake of the boat. It's just got up from a nap, give it a break. 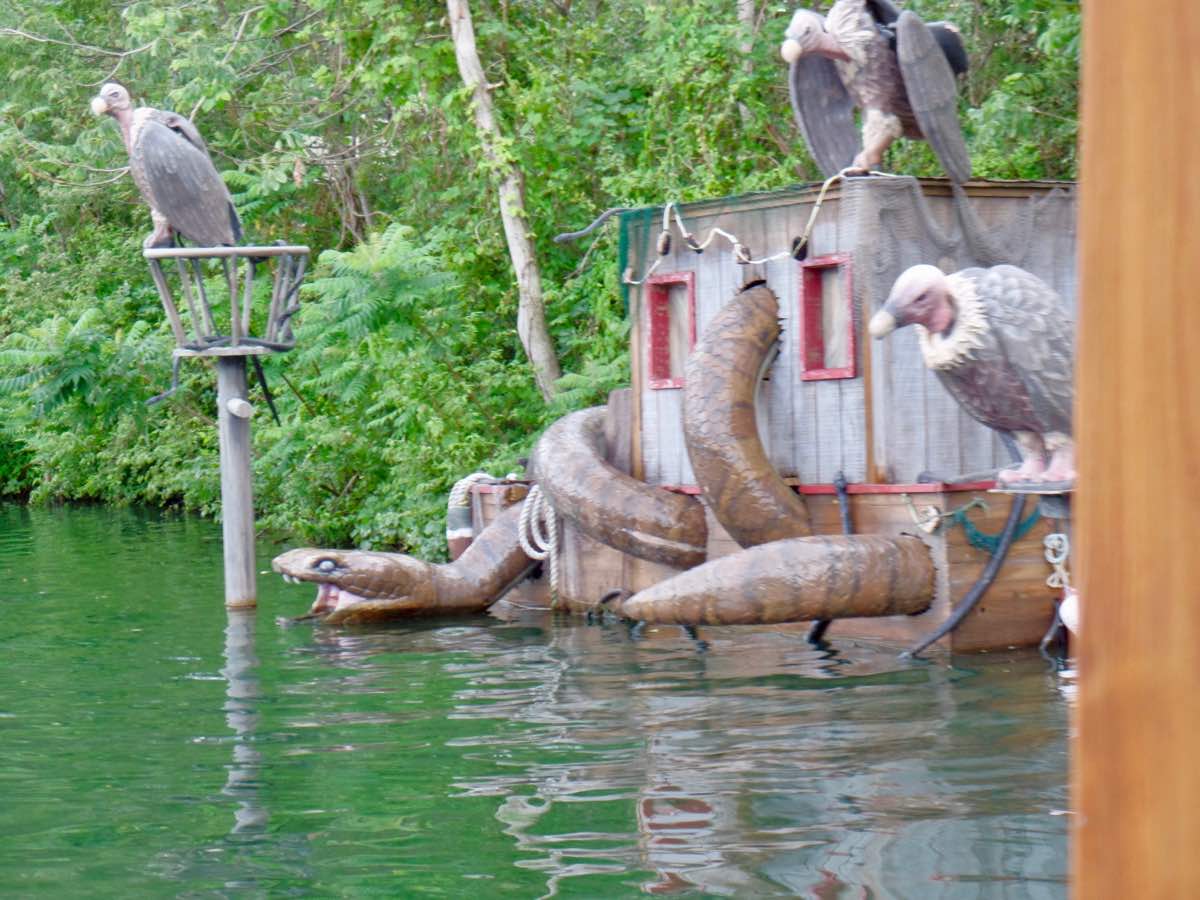 A last look at the basilisk and the half-sunken boat and the vultures around it. 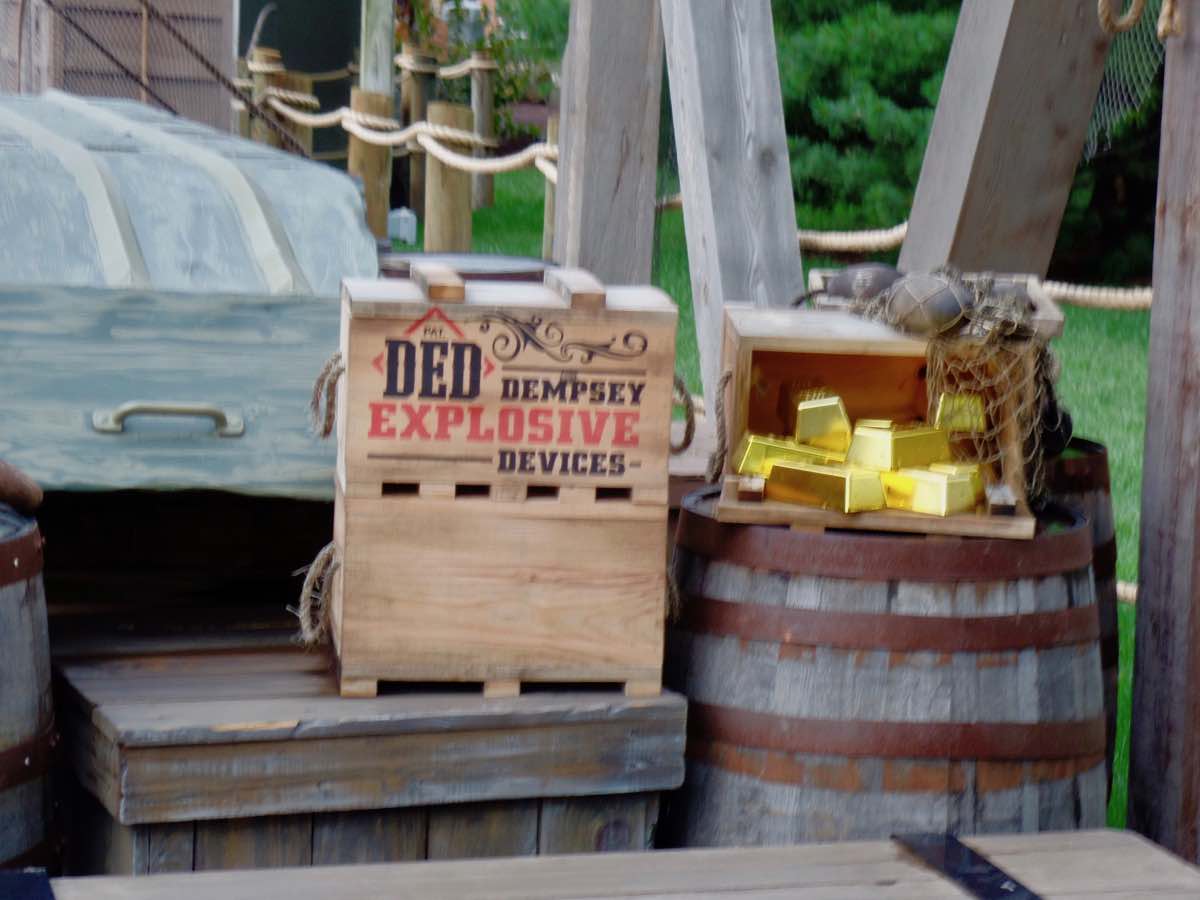 Some of the props at the exit to the ride, including some of the non-stolen gold bars. 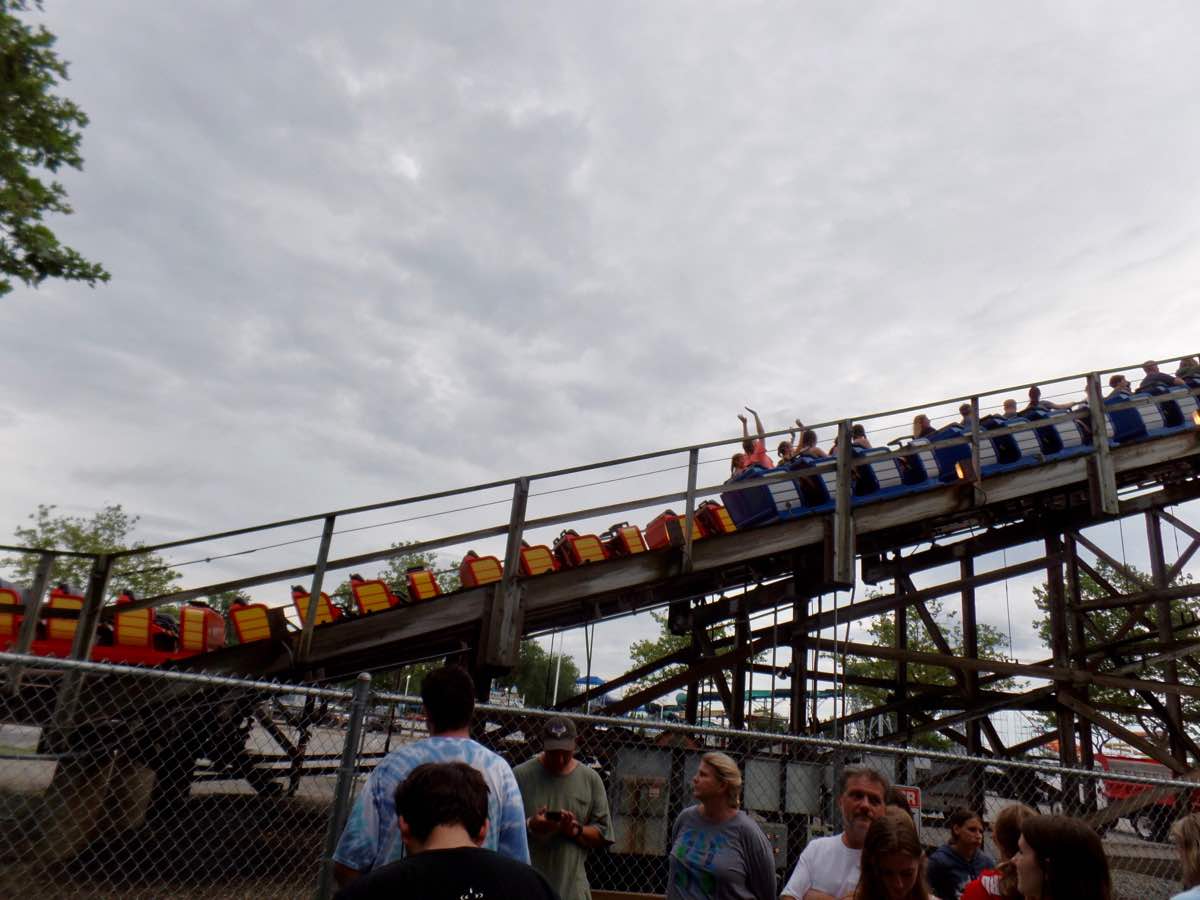 And there's Gemini! Running the red and the blue trains and for some reason the red train empty. It can't be from wanting people not to slap each other's hands on the lift hill, right? That would be daft? 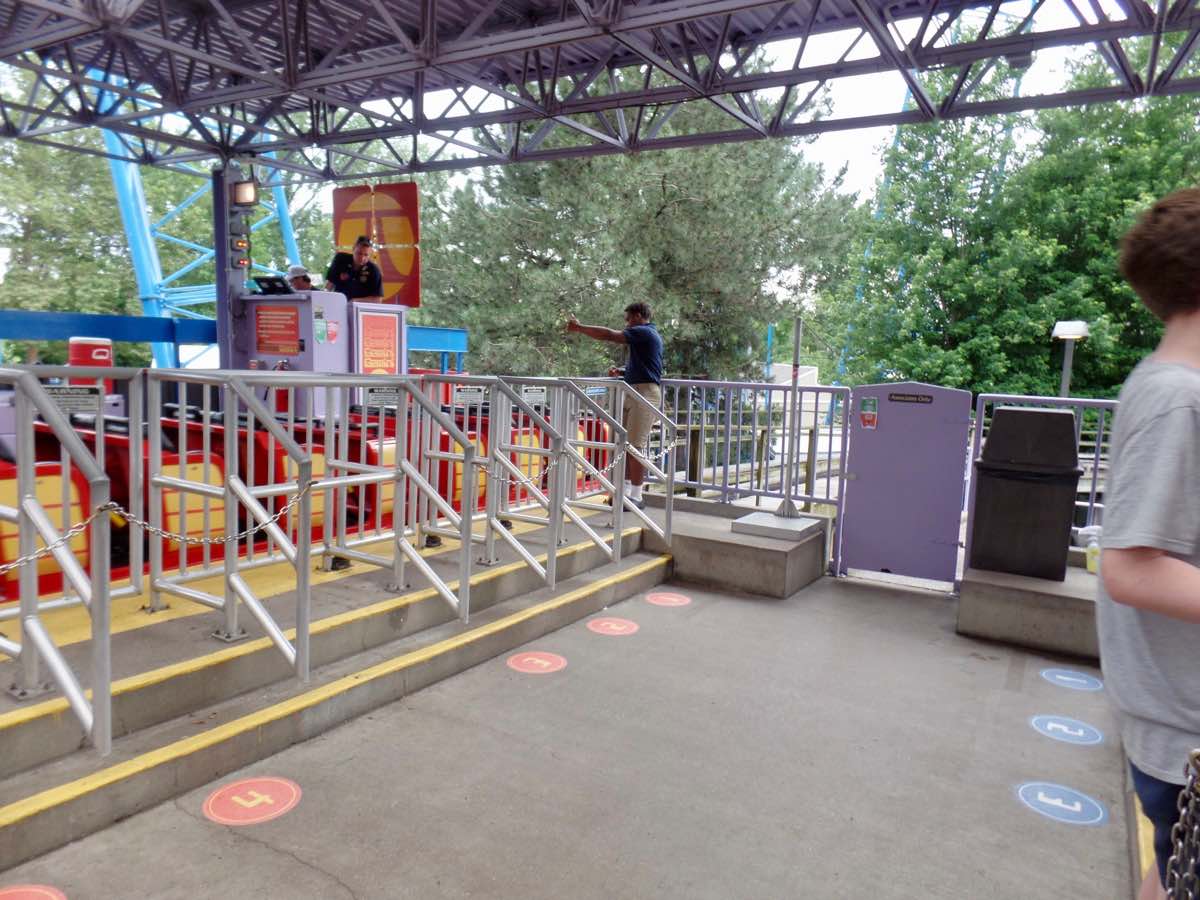 Really looked like a full crew on the red train side so I can only suppose that they were doing training cycles.

Currently Reading: Lost Popeye, Volume 5: The Roving Champion In The Land of the Jeeps. Tom Sims, Bela Zaboly. Editor Stephanie Noell. Soooo many Jeeps, though, that is great to see.