So Tuesday would be our first pinball event since the pandemic. For her first tournament since the world ended

bunny_hugger wanted an easy, low-key one. And one that could hopefully be done fast, as the bar's trying a Tuesday night DJ that threatened to fill the air with more noise than would be pleasant to hear. So we set out a pin-golf tournament, with six holes rather than the traditional nine, and a finals to be held if there were a tie for the lowest score. Pin-golf tournaments, especially short ones, breed ties, since every hole scores either a 1, 2, 3, or 4.

To make it easier yet,

bunny_hugger's plan was to award only a trophy for first place, a picture in a photo frame. She meant to modify the Rudolph picture she uses for Silver Balls, in December, as part of calling this ``Silver Balls in July''. The plan to add sunglasses or other summer-holiday decor were foiled by her drawing program, Painter Essentials, being a source of frustration and stress and failure.

This makes her drawing program ideal for a pin-golf tournament, since pin-golf is the format most likely to make people furious. Pin-golf objectives are often stuff you do while playing the game normally anyway, but when you're trying you can't make any progress. You could set an objective of ``tilt the pinball machine'' and two-thirds of your players couldn't do it. But seriously if you have a better drawing program please drop a line.

While walking to our hipster bar we saw a rabbit! They were sitting up, munching someone's lawn, and took off just as I stopped and said something. Still, surely a good omen. Also on the way there the house on the other side of the street, the one that put a pretty fancy goldfish pond in their front yard, called out. They were curious about the antlers

bunny_hugger wore, and whether they were part of a Halloween costume. We explained about going to a pinball tournament, one with a Christmas-in-July theme, and that's why the reindeer antlers. She also had a costume deer tail (well, rabbit tail, relabelled), but there's no seeing that from so far away. They seem like nice people but I'm intimidated by anyone who'll strike up a conversation with strangers on the other side of the street.

When we got to the bar they had someone at the stand for checking IDs, but weren't checking ours, or as far as I can tell anyone's. We set up upstairs, using one of the less good group tables. There's one group table that's huge and well-lit but I understand if the bar would rather that be available for a group that's buying more than some Diet Coke. Which

bunny_hugger and I got, and which they gave us in Mason jars rather than plastic cups, so I quipped that this proved they had no hard feelings towards us. (We haven't been shy about saying inessential stuff like bars and restaurants were opening too soon. We had some worry staff might feel we were implying they were bad people for going back to work in these conditions.)

A lot of people were there already. In the bar, yes, but also people there for the tournament. Since the event was worthless for pinball rankings (there won't be sanctioned tournaments until August, and there won't be state ratings until January) and the prize was a color picture printed out at Kinko's hours before, this reflects how much we all wanted to go out and play pinball together.

bunny_hugger and I wore masks (I wore this gaiter, doubled over), as did MAG, and ... oh, I forget who but someone else did whenever he had to go too near people he didn't know. I don't mind standing out this way. (Some of the bar staff was still wearing masks too.) So far as anyone did say anything about it they admitted this was probably the wiser course. I squeezed in between machines, sometimes between people's turns, to put the pages with tournament information (objectives, how to achieve them, how to know they were achieved) on game backglasses. Almost like we would do any night, as if it hadn't been two weeks and forever.

MWS arrived. He's been to the bar a fair number of times before, but this was the first we'd seen him since the pandemic started. I hugged him, tight, the first physical contact I've had with anyone not family in sixteen months. He was overjoyed that

bunny_hugger had posted the recap for the last league night, the day of the next event, just like everyone joked she did in normal times. MWS wasn't the only surprise either. CST was there! He hasn't been able to make it to a Lansing event in years, even before the pandemic. He made no commitment to getting to anything past this, but for now, he was here, and that was so good to see.

Everyone admired my hair. RED referred to it as the Fabio look. I had deliberately prepped my hair to reach maximum volume, just for that effect.

The tournament was ready.

I'm now two weeks behind current in my photos. Here's our anniversary, at Cedar Point, and anticipation of the sesquicentennial parade to enjoy. 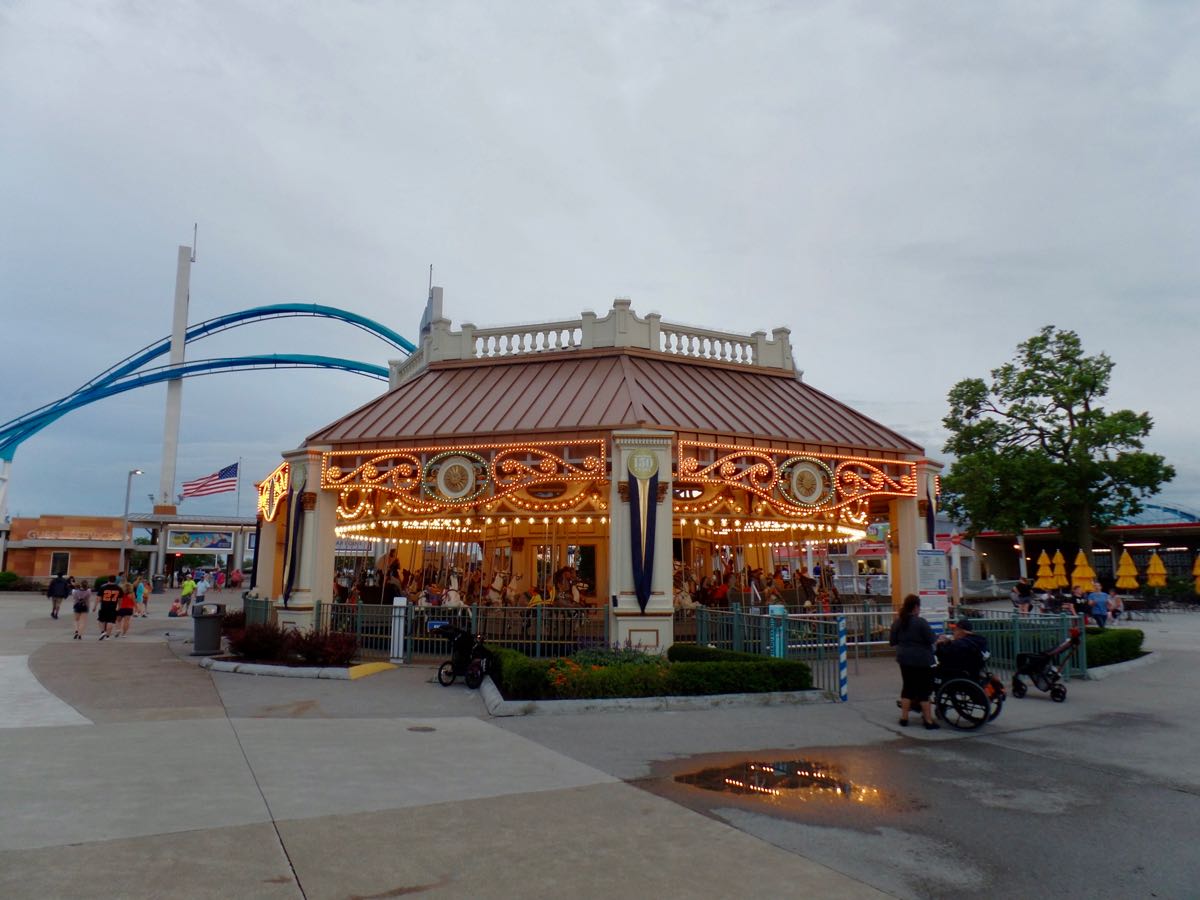 Front of the park again, and the Midway Carousel, lit up in the early-twilight glow. We're not sure but think the lighting's changed, particularly the circles in the center of each face there, which are a more blue color than the rest of the amber lights. 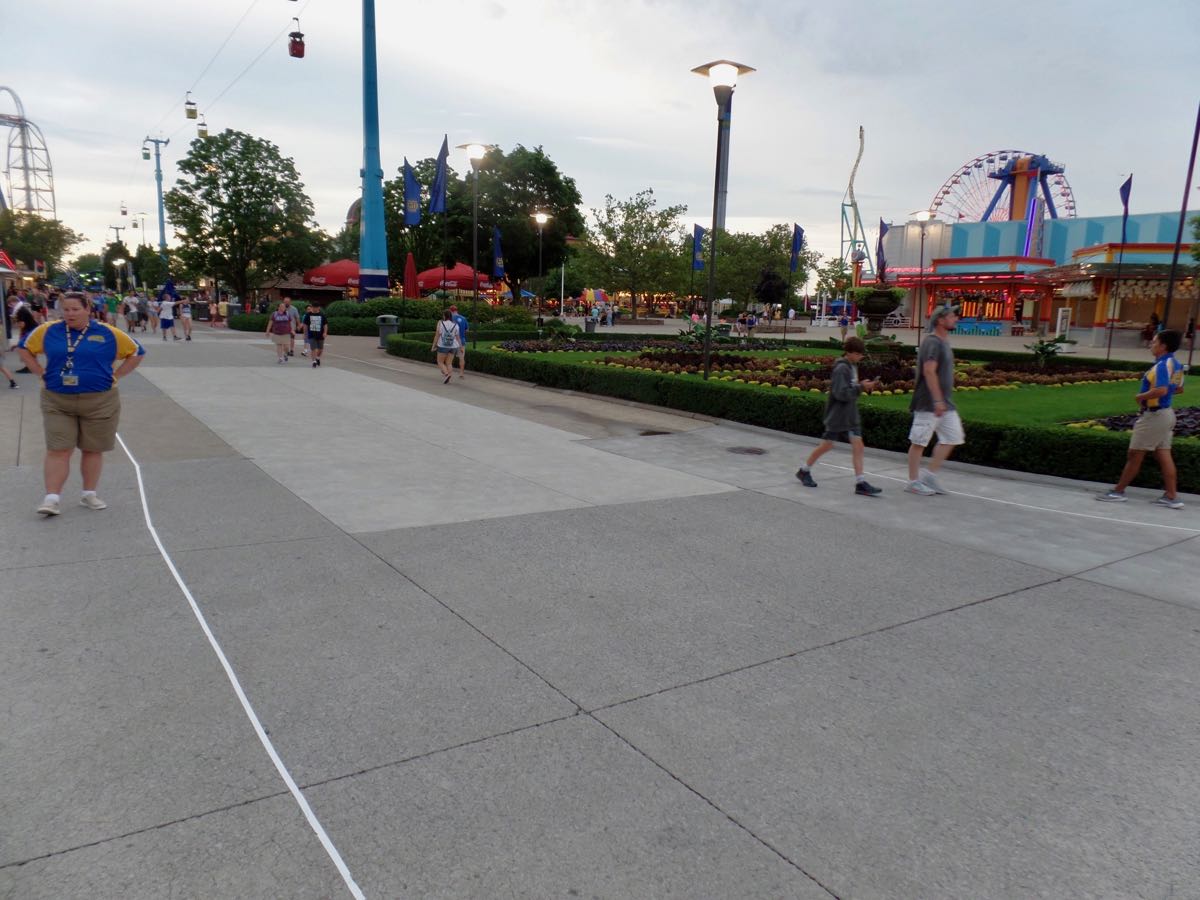 The parade's path marked out in tape. One of the park employees watching and who'd have the job of clearing people out, once the parade started, spotted our ``I've been coming to Cedar Point since --- '' pins and came over, thinking the pins were for old Cedar Point employees. She'd normally worked ... I want to say the Hotel Breakers ... and took some hours doing the parade for the change of pace. 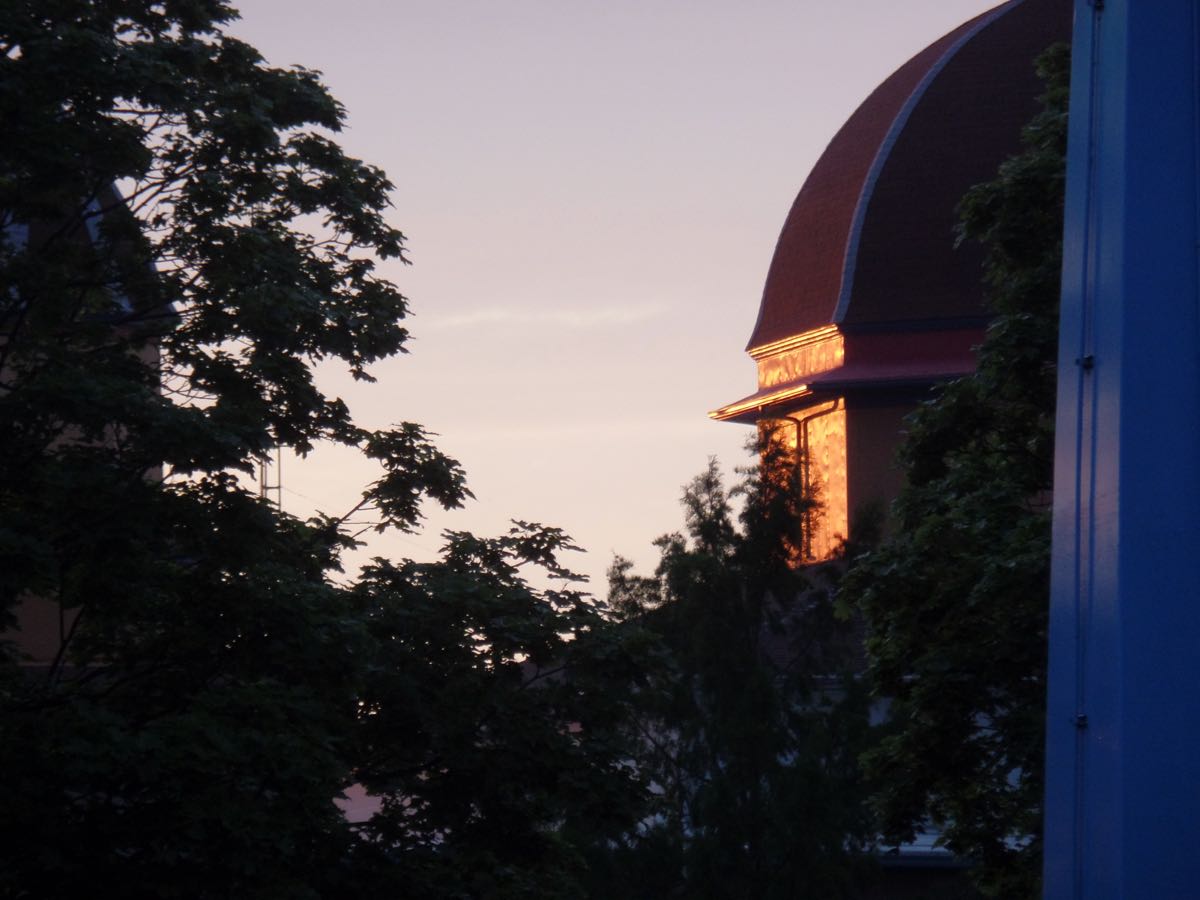 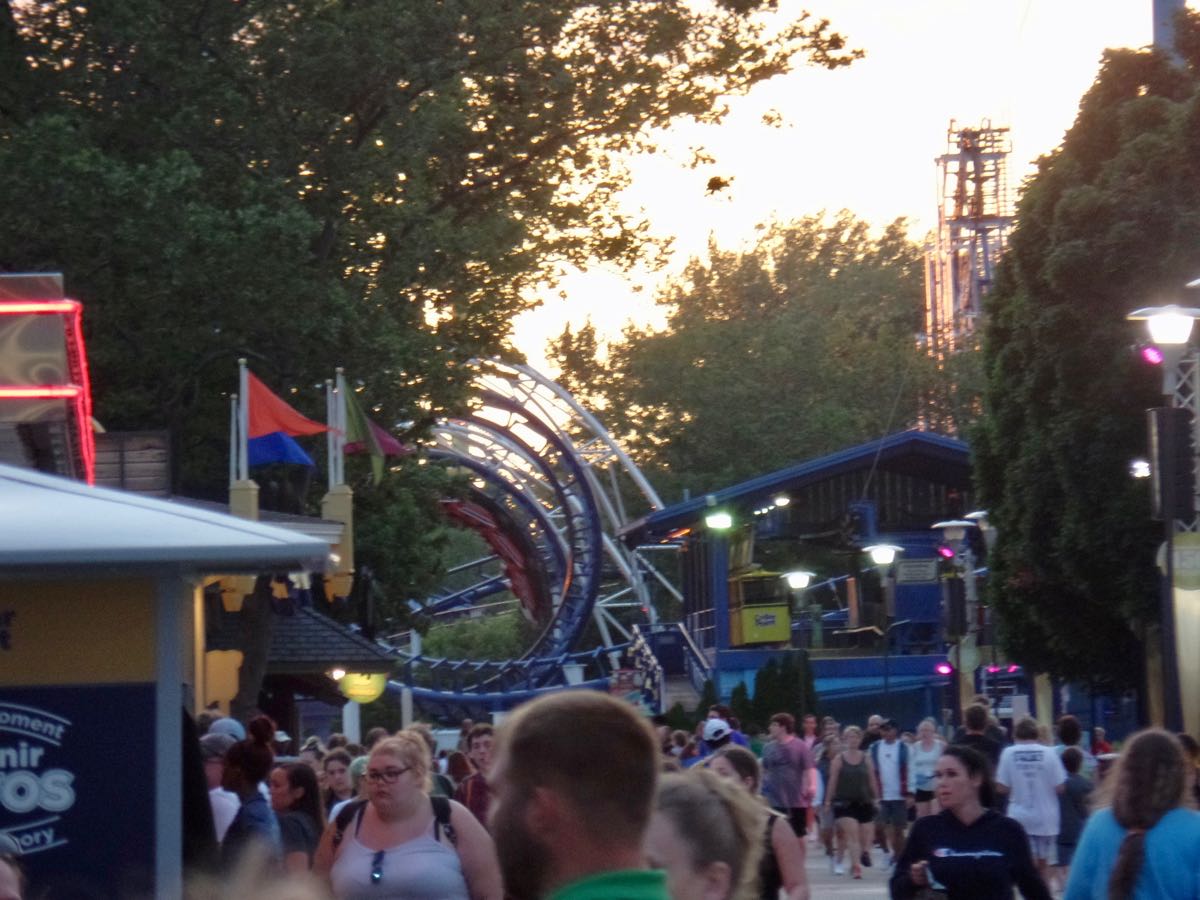 It's not a telephoto lens, but it's almost good enough. Looking way up the midway to the Sky Ride receiving station and the Corkscrew, with a train going through the loop. Here's a scene, in subject and in color palette and in nothing quite being in focus, for your 1970s Style Montage of the amusement park. 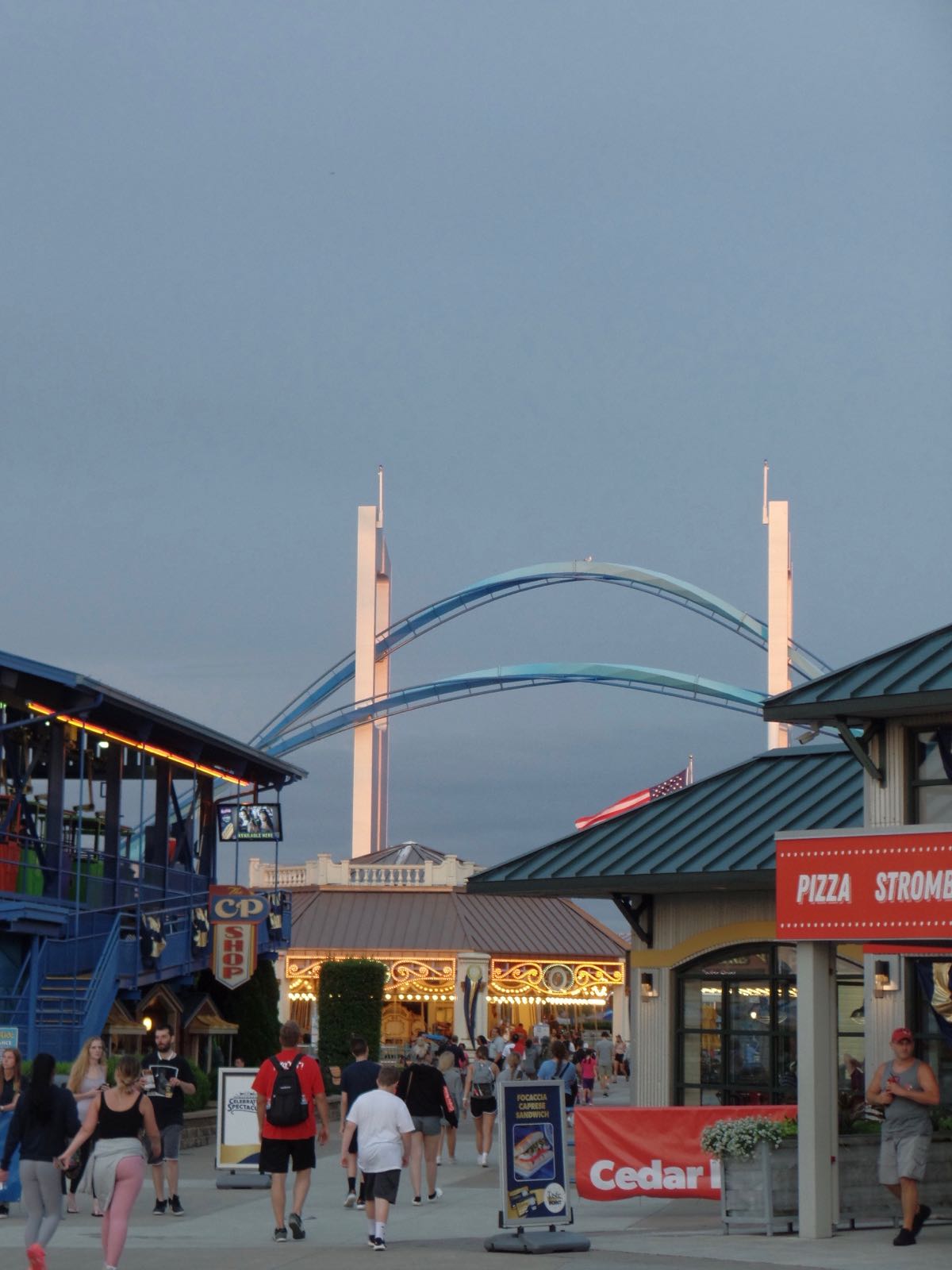 Evening light being all flattering to GateKeeper's keyholes, there. 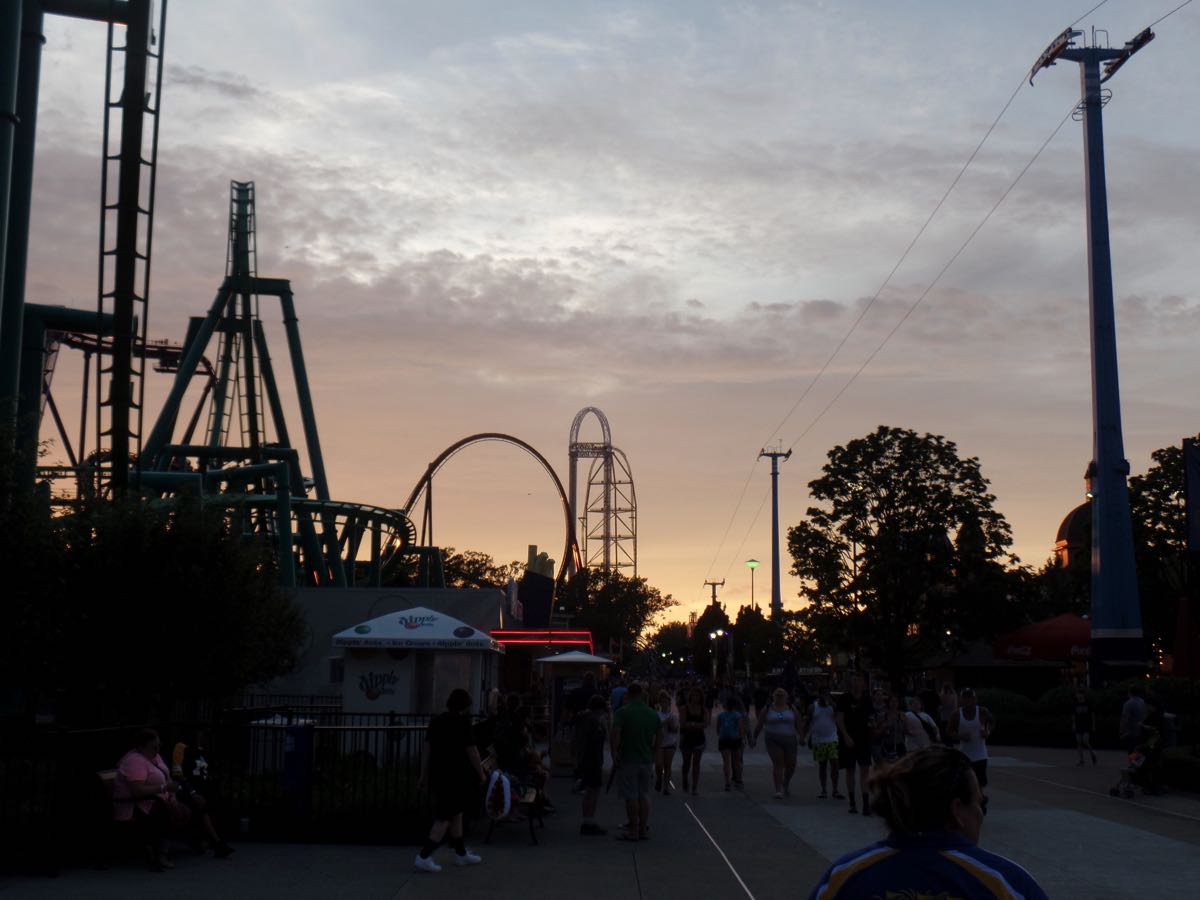 And another look up the midway, to see several coasters and friendly cloudy skies. The parade starts soon, don't worry!

Trivia: In 386 AD, Theodosious I, emperor of the Eastern Roman Empire, decreed Sunday to be holy and abolished the old Roman festival calendar. Source: Marking Time: The Epic Quest to Invent the Perfect Calendar, Duncan Steel.

Currently Reading: DC Showcase Presents: Metal Men Volume 1, Robert Kanigher, Ross Andru, Mike Esposito. Not promising I'll finish this but the stories were merry, goofy things with that 60s tone to them and I like that.

PS: How To Find A Logarithm Without Much Computing Power, or, me filling time with old writing. I need that sometimes.

PPS: If you're in a place to extend help,