But never leave the stream of warm impermanence and

When the tournament started we figured to let people form their own groups. At league we draw lots, so everyone gets a fair chance to meet everyone else. Here, we thought people could be excused focusing on the folks they missed hanging out with. So we passed out scorecards, reiterating how to log scores and all, and do you see what problem is created here?

That's right: by the time

bunny_hugger and I had passed out everything people needed, everyone was groups of three or four players. We would have to play by ourselves, in a group of two. ``I already played the course with you last night,''

bunny_hugger observed, correctly. We had hopes late arrivers might join us, and some people did come late, but they wanted to play with each other. So we took the course by ourselves after all.

I had a good night, one with a bunch of lucky breaks. For example, in Medieval Madness, I needed to light two Madnesses before starting the multiball. I had one lit when the ball fell in the scoop, something that would make the goal really really hard. But the scoop happened to be lit for a mystery award, and that award was the second Madness I needed, so I got the goal after all. MWS got into the same fix himself, and didn't have the luck of the random number generator on his side, and ended up not getting the objective after all.

Which was quite the surprise! MWS had a frustrating night, but pin-golf is all about frustration. It was a good laugh line over the night for me to say ``Oh yeah, we forgot: pin-golf sucks!'' The thing about pin-golf is you're trying to do stuff you always do when you're playing without thinking about it, only now you're thinking about it, and you can't. But people were also learning things, which is the good side of pin-golf. One of the objectives on Junk Yard was collecting pieces of junk, which you do by making certain shots while they're lit. More than half the players --- who've been playing this game for years --- did not know you could pick which piece of junk you'd collect, which makes the objective a lot more attainable.

Well, I ended up with a score of 13 for the six-hole course, which is ... shockingly good. There was only one objective I completely failed to meet.

bunny_hugger right then privately said I had won the tournament, which I thought was flattering but nah, there's a lot of really good players here. But then CST came in and turned in his scorecard; he had an 18 or 19 or so and silently compared his score to mine. ``That doesn't seem right,'' I said, and he grinning and went off to play Tron, one of the new-to-the-venue pinball games. Well, it still doesn't seem right.

DMC and RED came close to my score, with 14 each, but to our amazement nobody tied or beat me. Which means that we did not have to play the Final hole, intended as a way to break the tie we thought inevitable. Which is lucky because there's no possible way that I would have won. But also a shame because we had an absolutely fiendish tiebreaker planned.

See, the trouble with a pin-golf hole as a tiebreaker is, what if both players hit the objective on ball 1? So we set: the breaker for that tie, two or more players getting the objective the same ball, would be whoever had the lowest score. But if nobody got the objective? Then the win would go to whoever had the highest score. So you had to decide whether you thought you, and everyone else, were going to make the objective at all, and maybe re-think your guess after each ball. I love the psychology of it and regret we didn't use it anyway. I would absolutely have lost.

But this did mean that in this ... my first pinball event in sixteen months ... I won. It feels like it should be a good omen for the resumption of normal life, if resuming normal life is still on.

Everybody absolutely loved the picture

bunny_hugger put of of me on the league Facebonk, showing my hair spread out and backlit by pinball machines, forming a glorious translucent halo. It's outstanding.

And then we could finally enjoy just having time, and presence, at the bar with our friends. Some things about the bar have changed. Plexiglass barricades all over the place, for example, which at least do simplify the question of where to stand for drink service. Also the hipster bar has evolved to the point their TV shows mute reruns of the Garbage Pail Kids or the He-Man cartoon of the 80s. I remember at the time finding Garbage Pail Kids such a heap of body horror I couldn't even think much about them; now, I don't know. There's a certain cuteness to them, at least in animated form, but I also didn't care for the show as far as I could follow.

One of our friends, I learned, had gotten Covid-19, a case fortunately not needing hospitalization. But they got it, they deduced, in the trip they made out to get their first vaccination shot. And they kept this secret from us, misunderstanding that window when I refrained from going to the store, sending the vaccinated

bunny_hugger out alone. I didn't have any serious dread of getting the disease for a necessary risk, which I never seriously supposed the shot itself would be. Still, wow. They're all right but the second vaccination shot really knocked them over.

At the end of the tournament

bunny_hugger and I went to play a game purely for the fun of it, our first location pinball that wasn't for a purpose since March 2020. Of course we started on the Beatles, because it's a great theme and fun table and was also the last thing we played before all this. The last time we played I put my name up as Grand Champion and somehow it was still there. This time ... neither of us put our names up as Grand Champion, but we did get accomplishment credits, for really good scores in some of the modes.

For all that, though, we didn't play very much! After some Beatles --- the game kept giving us replays, or we'd earn it by playing well --- we got back to talking seriously with people in person finally, as would really be the more important thing to do. It wasn't until about 11:30 --- 90 minutes before last call --- that we got back to playing something, in this case Tron. Tron is about a decade old, but we haven't had it in the venue before; it and the new Teenage Mutant Ninja Turtles are the two games that joined the venue since its closure. We did not have awesome games on it. The table plays a bit faster than we expected from the last time we touched a Tron, a couple years ago. We'll learn, I hope.

We didn't have time for Teenage Mutant Ninja Turtles. That too can wait. MWS said he hates Turtles, that the rule set is dull and no shots feel that good. Which, he acknowledged, might change. Great thing about modern pinball design is it's easy to distribute and load new rules. Lousy thing about modern pinball design is game makers can produce pinball machines with half-completed and poorly-balanced rule sets and promise they'll make it work later. But sometimes they do. Walking Dead, Ghostbusters, AC/DC, and Batman 66 all got rule updates that turned them into completely different and much better games. Walking Dead even got one that turned an annoying and tedious shot into a valuable one worth mastering, so that the shot became one that felt good to make.

But I'm still disappointed since after he said he hates Turtles, I asked MWS ``You know who else hates Turtles?'' He never asked who, leaving my joke without an excuse to deliver. The answer of course is the evil Shredder. I'm sure I'll get another chance to set up that line. I don't think Kraang would be the funnier answer.

And then ... the DJ. As threatened they had a DJ come in to play and that got started as close to on time as they ever do. Turns out they used to play at Mac's Bar, but since that closed and then is busy morphing into a sports bar, they wanted to go somewhere. I don't know if this will really fit our bar's whole vibe, but will admit, it got more people on the dance floor than I've seen at past DJ-based events. (Outside major shows, like for Halloween or something.)

I can't say that it was loud, per se. Not enough to make me feel like earplugs were needed. And they were playing the music of my people, that is, mostly 80s songs, heavy on the New Wave. But even though it wasn't too loud, it was hard having conversations over it. I feel like I'd rather do without, but I understand the bar catering to a much larger crowd than me and some of my pinball friends.

Near the end of the night --- after midnight --- we all figured we were tired and worn enough to break up the night. MWS reported his first attempt to close out the tab failed, which was a cheerful sign. The bar hadn't lost its particular touch, even with all its changes.

And that, all that, was a night at our hipster bar, and our first tournament. The next event is for a week from Tuesday.

We only had a short while in Cedar Point after the parade. Of course we spent it on roller coasters. 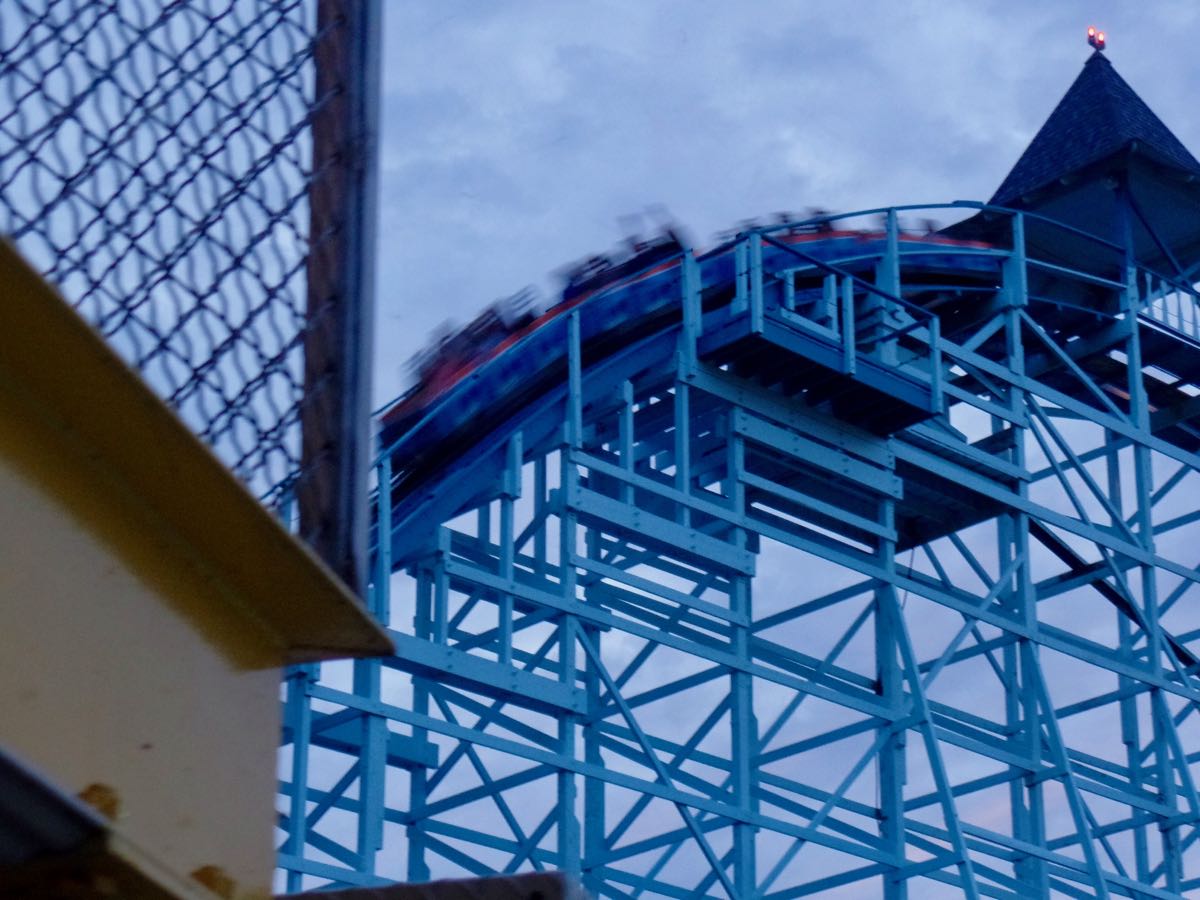 The first drop on Blue Streak. Seen from the queue for Raptor. 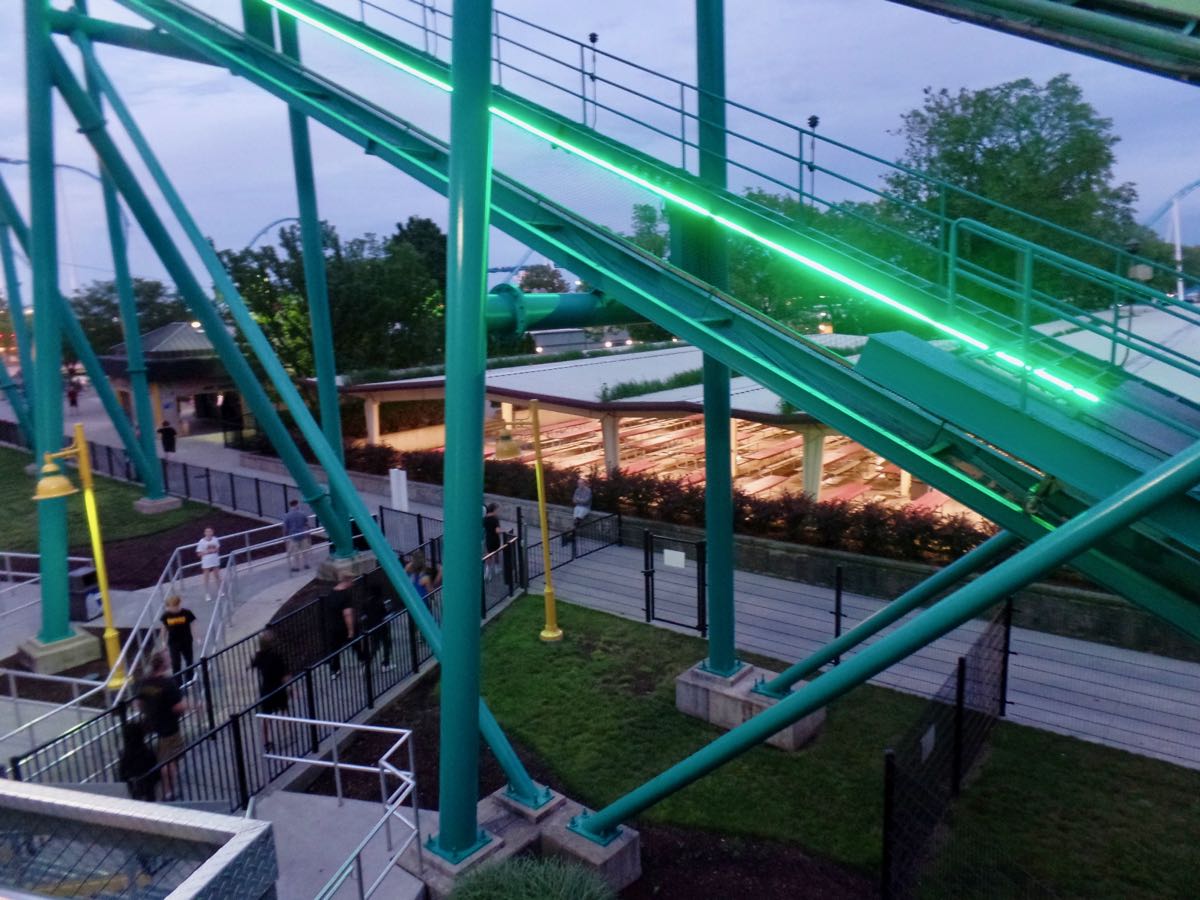 Looking down at one of the bigger picnic pavilions from the stairs leading up to Raptor. 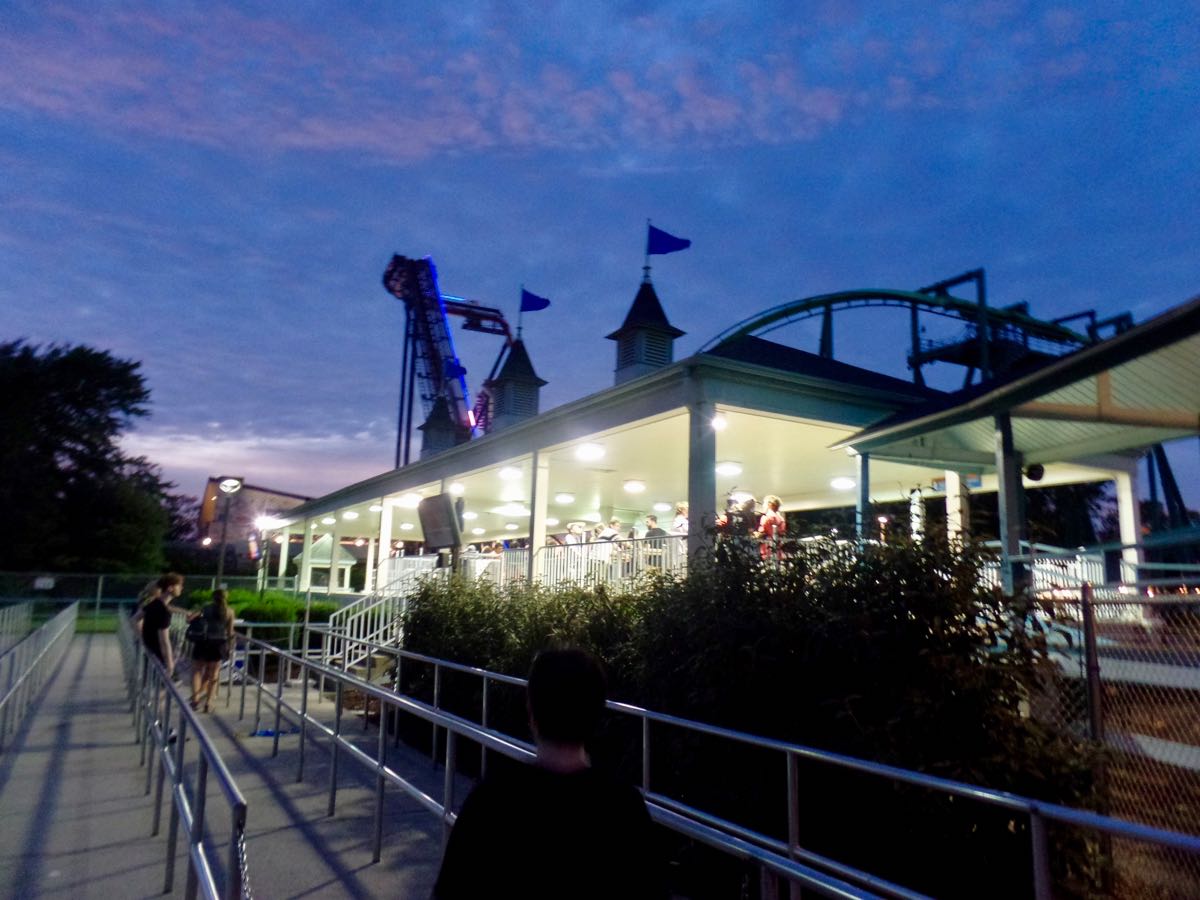 And now .. the most beautiful coaster at Cedar Point, Blue Streak, by twilight. 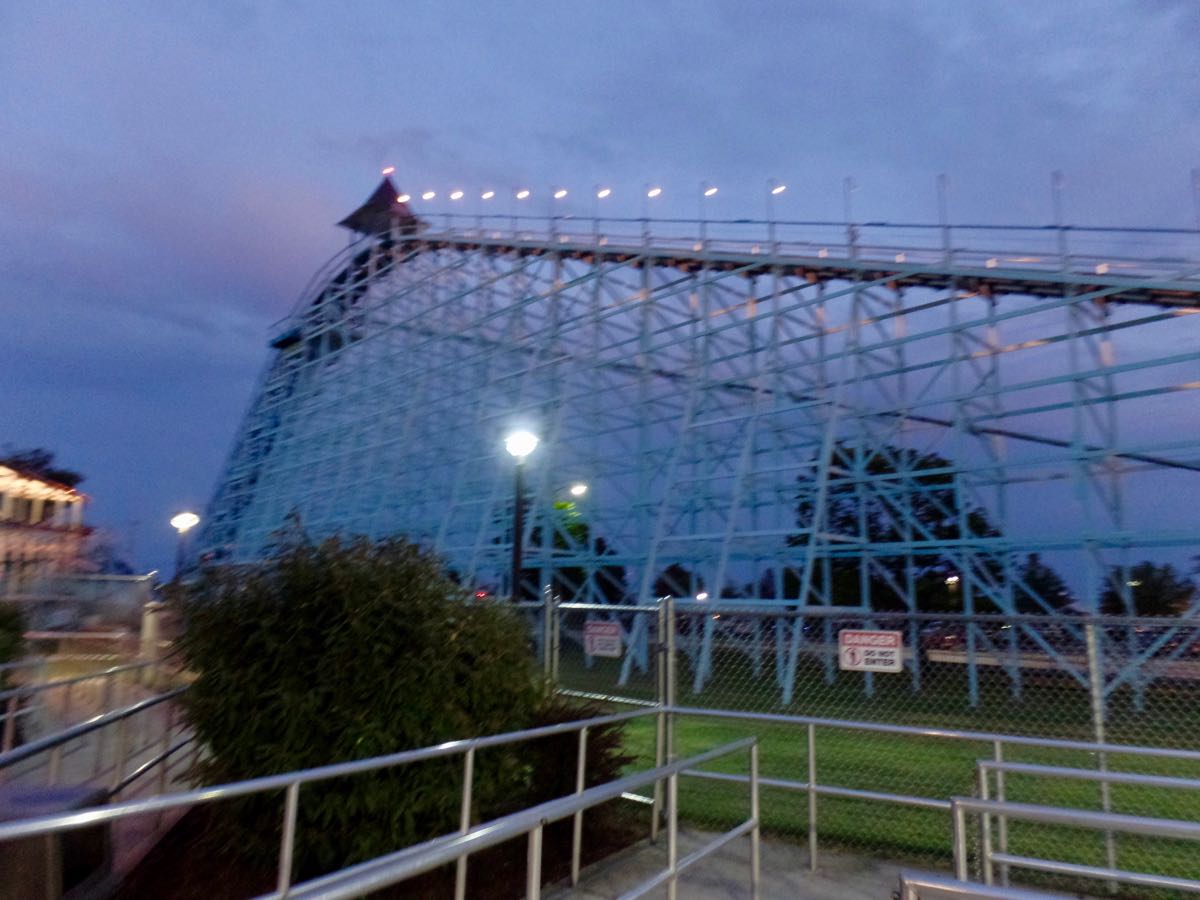 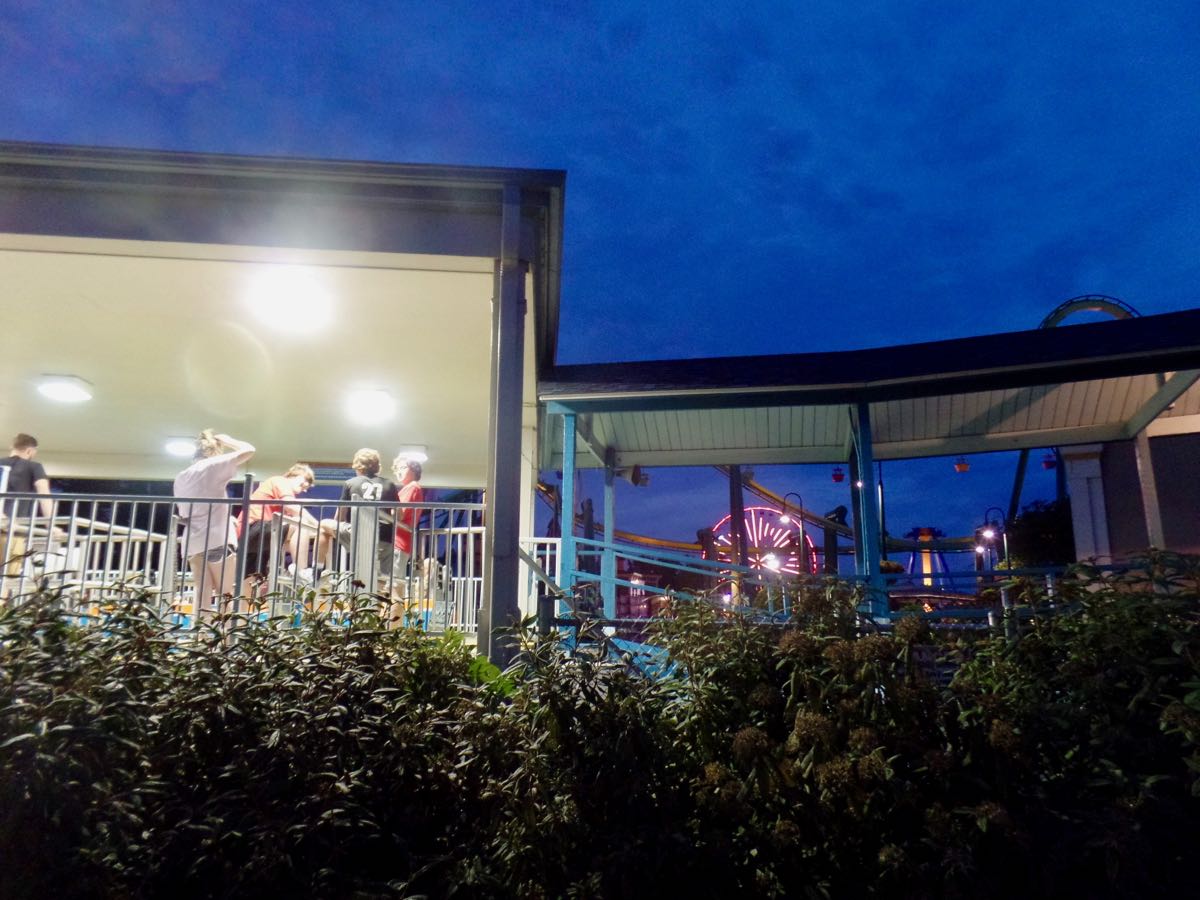 Blue Streak's station, and the braking area on the return, with the Giant Wheel visible as a coin through the empty spaces there. 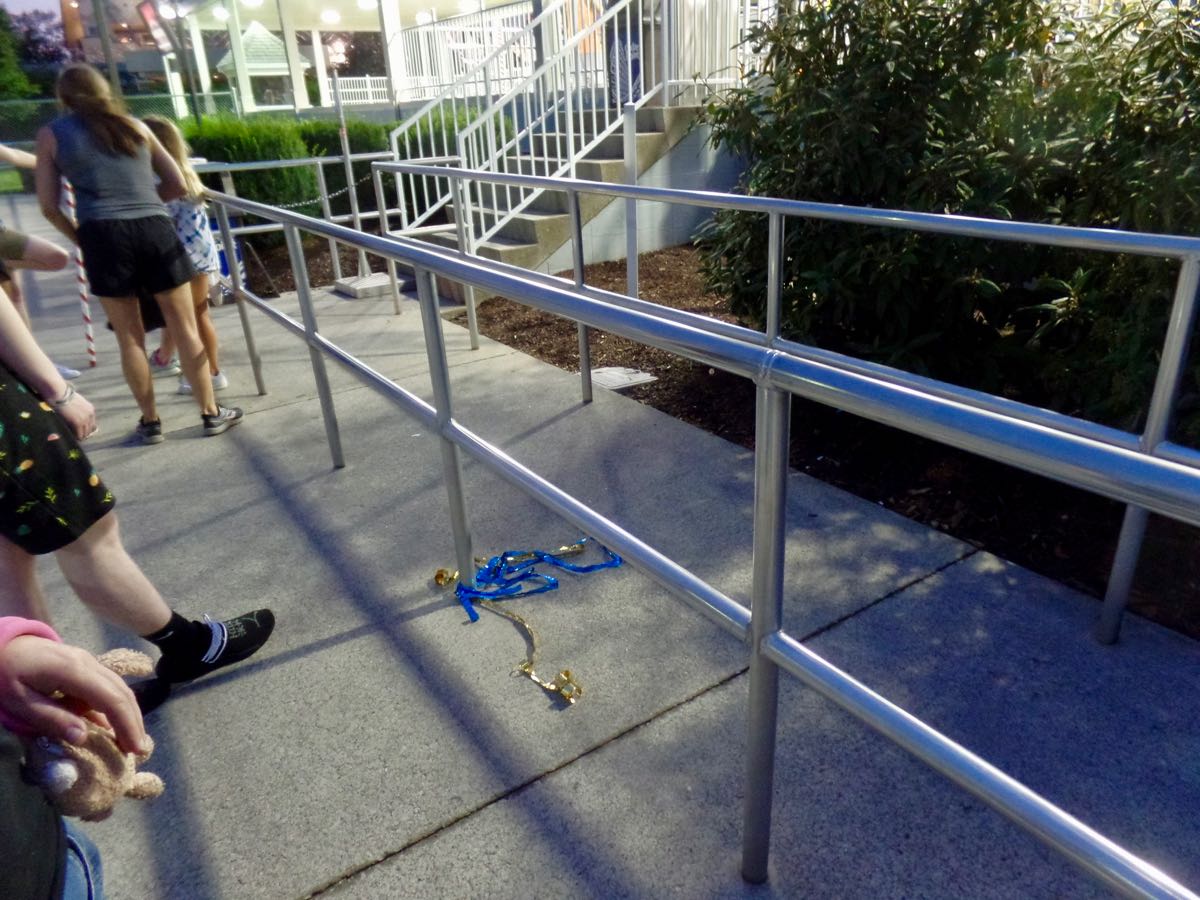 Blue and bold ribbons. The parade had these as confetti streamers and they got everywhere, in part because people were grabbing them as souvenirs too ephemeral even for me to consider.

Trivia: Jose Luis Borges had a cat named Beppo. Source: The Uncyclopedia: Everything You Never Knew You Wanted To Know, Gideon Haigh.