Tuesday we did something we hadn't done since the first week of March, 2020. We went to our local hipster bar just to hang out, to see other people playing on an off-night. Not to do anything. MWS was there, and a couple people from league. Also a couple of MWS's friends from the east side of the state.

The first big thing was discovering a new pinball game there. Well, a game returned: The Walking Dead pinball. It used to be at the bar, and hasn't been for years, although it left such a strong impression all this while we kept forgetting it wasn't there. We had to think a while to figure what it had replaced. That would be Stern's Iron Man. We played the one four-player game of it and, for the first time I've played Walking Dead in two years? It went really, really well. Like, name-on-the-high-score-board good, although since the game's only been a couple days the high score board isn't that high.

Since we weren't there to compete or anything naturally a tournament broke out. One of MWS's friends has a subscription to Matchplay.com and could set up an unofficial tournament easily. So we ended up playing a four-strikes match, letting the computer pair up people and see who would be the last person to lose four games overall. So, I had some games that just went lousy, like Getaway (ours is a tough table) or Stern's Jurassic Park. The latter, in part, because I had completely forgotten the rules and the game's a complicated rules-heavy piece.

But I also had good games, too. Some, from pure luck. On The Munsters the mystery shot gave me Raven Multiball, a particularly lucrative one and that's normally hard to earn. I got picked on Batman 66, a game I always like, and was able to build my two-ball minor villain (Shame) into a huge game. Willy Wonka, also a game I always love, let me put Slugworth Multiball alongside the Welcome To The Factory mode, building up a couple kajillion points while my opponent went and fumed. Attack From Mars, against

bunny_hugger, went incredibly well for me. Everyone chuckled when the computer came up with that pairing, since everyone finds it funny when I'm put up against

bunny_hugger for a match. I don't.

Well, the way it turned out? I ended up with three strikes and MWS one, with us playing for bragging rights and also a $25 pot. (I missed why it wasn't just dollar games.) He's a better player than me, so all I hoped to do was beat him once, make him work for it. Thing is ... I didn't beat him once. I beat him three games in a row, including a game where I just had to keep grinding out attempts to finish off a mode on Kiss. It's not a preposterous turn of events --- MWS wasn't playing up to his full capacity --- but I was playing surprisingly strong.

bunny_hugger groused that I came out of the lockdown somehow a better pinball player. I don't think that's true, except that I've been using our Tri-Zone, and a lot of The Pinball Arcade app, to practice new skills. The particularly important one is dead-bouncing. This is the most deceptive pinball skill because it is literally just don't hit the flipper. The reason this is a skill is that the game is always tempting you to flip. You're trained to think even if flipping makes you lose the ball, at least you tried something. But most of the time, it's better not to flip because then the ball will go slower, and a slower ball is more likely in control and can be sent where you want. So if anything has changed, I'm more comfortable not hitting the ball.

But wow. It's really paid off last week and this week. I wonder what's going to happen if we get back to pinball events that count for ranking.

So now let me get to pictures from the Silver Balls in July mini-tournament, our first for-fun pinball event in sixteen months. This was all last week but don't worry, all pinbal events look basically the same, as you've seen and will see again. This first couple pictures are from the night before, when we went to scout out what was there and how it was playing and all. 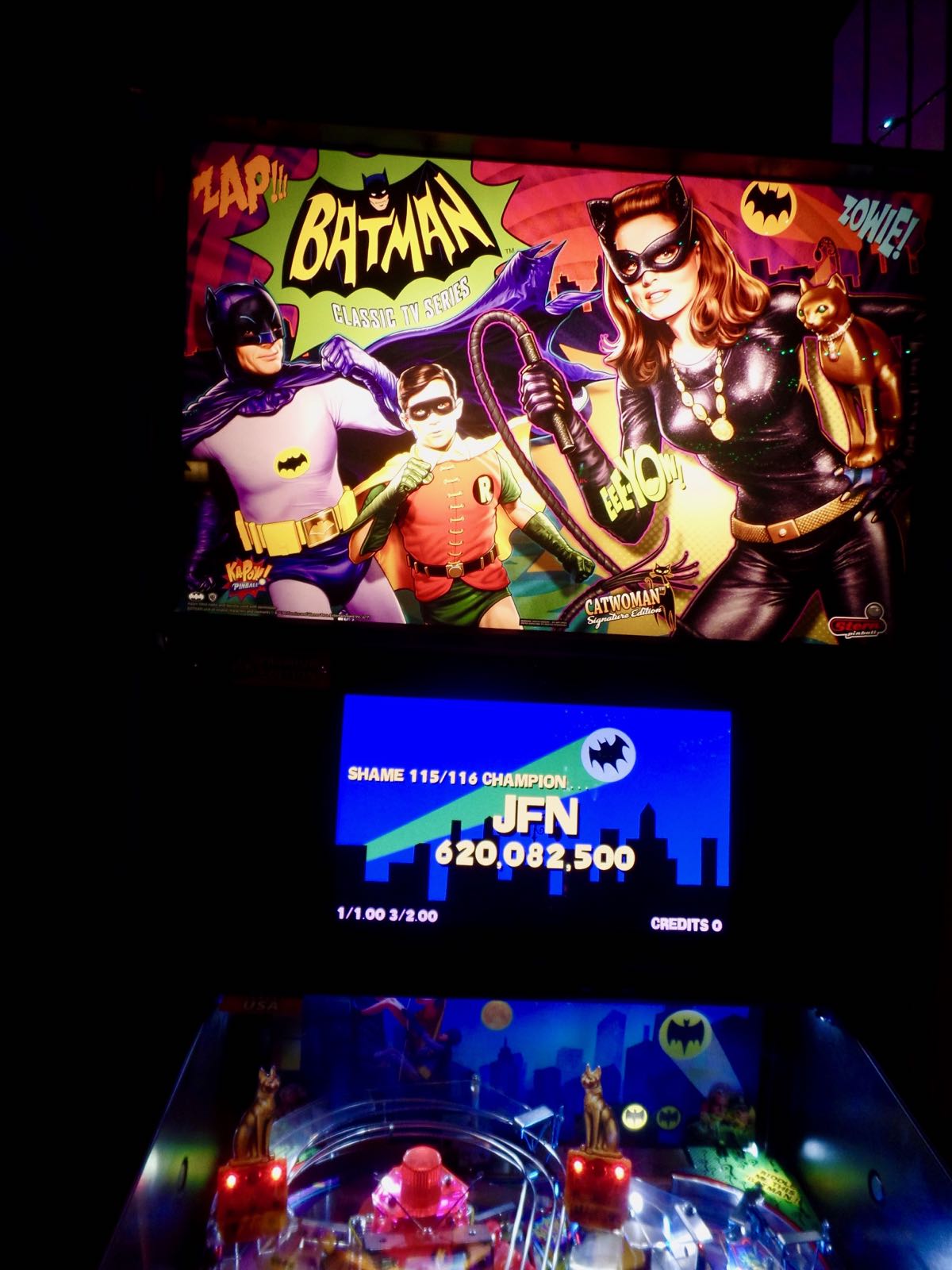 The first big shock of the night: that my name was still on any high score tables. This would be an 'achievement credit', one of the lesser things you can do in Batman 66. Still, I would have bet on the whole high score table being deliberately blanked at some point over 16 months. 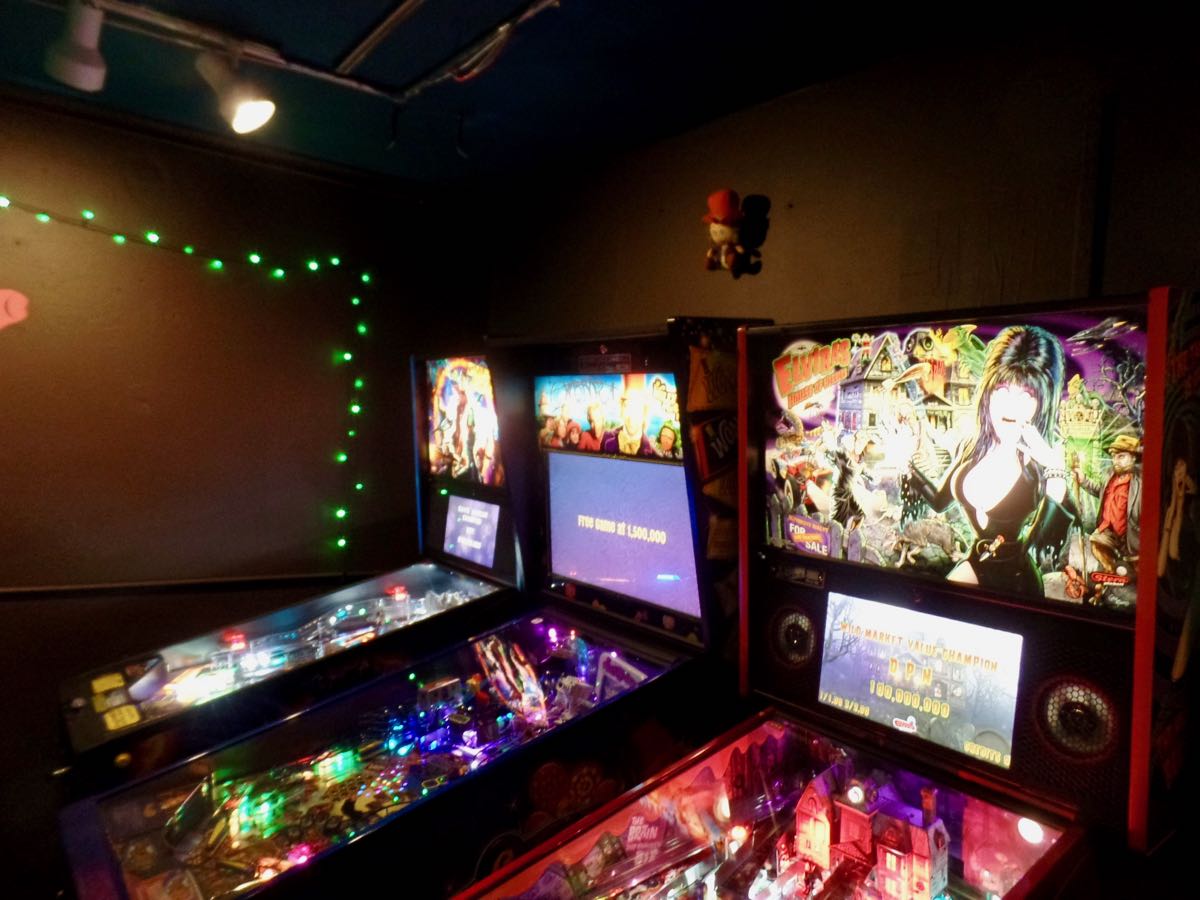 The secondary alcove with some of my favorite games including Rocket Raccoon in the far corner and Willy Wonka. Note that above Willy Wonka is a little doll Wonka hung from the wall, for the reasons. 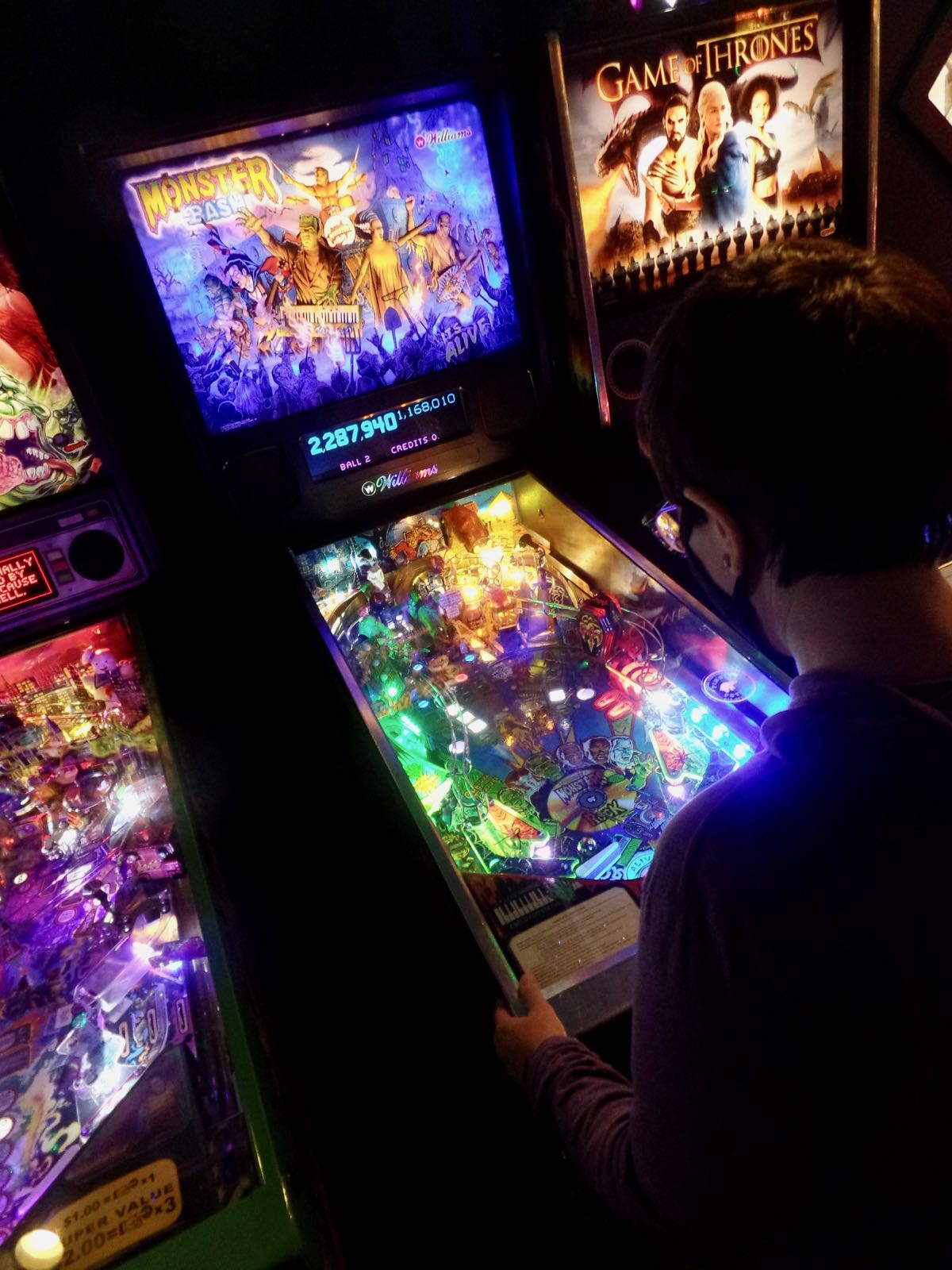 bunny_hugger on Monster Bash, testing just how hard the objective we'd picked was. You can't actually make a pinball golf objective too easy --- ``let the ball drain'' would be missed by 25% of all players --- but it's worth testing that it's still fun to try.