So here's the story where I came this close to falling for a scam.

We got on our answering machine the last half of a message from McLaren Medical regarding our account, and the number of call to deal with this. Both

bunny_hugger and I have had medical care through McLaren this calendar year, but we couldn't think of any bill we'd received that we hadn't paid. We could find some of our past Statements of Benefits (``we did not pay for this procedure for this reason: we declined payment for this procedure''). But, of course, if we had missed a bill, perhaps because of the Republican-sabotaged postal service, we wouldn't have it. This would just help us against ``we got the bill, figured to pay later, and later never arrived''. Still, the message was curious since it must have started reeling off the moment our phone picked up, not letting the answering machine give its spiel. The message as received didn't have an account number or even specify which of us two was supposedly in trouble. The answering-machine cutoff could explain that, but the message did not repeat itself, which was also mysterious. But it did have the phone number to call for this, and I sent that into DuckDuckGo.

And, mm, it looked kind of legitimate? Like, I saw the number on McLaren hospital's Financial Services page. But for McLaren Macomb County. That's a Detroit-area county. We'd expect to be asked to call the Lansing-area services. Possibly Washtenaw, for some services in Ann Arbor that might have ended up billed by McLaren there. But Macomb? So, not quite sure what was going on I called and got the tones of the-number-you-have-dialed-is-not-in-service. I tried a second time and the phone rang a few times and hung up. This seems unprofessional for a medical group's financial services system, but since companies changed their phones into Internet products they don't work either.

So Monday, before some events I am not yet prepared to have come to light, I figured to call the Lansing-area number and ask what if anything was up. This brought me to the McLaren Financial Services page and I looked at the phone number for Macomb once more. My first paragraph reveals the punch line.

The number on the phone was not McLaren's actual number. One digit in the exchange, right in the middle of the numbers, was a 7 where it should have been 4.

So that evaporated the last suspicion that I needed to do anything about this call. I'm embarrassed that I let it get any farther than reading carefully McLaren's web site to confirm whether it was their number. 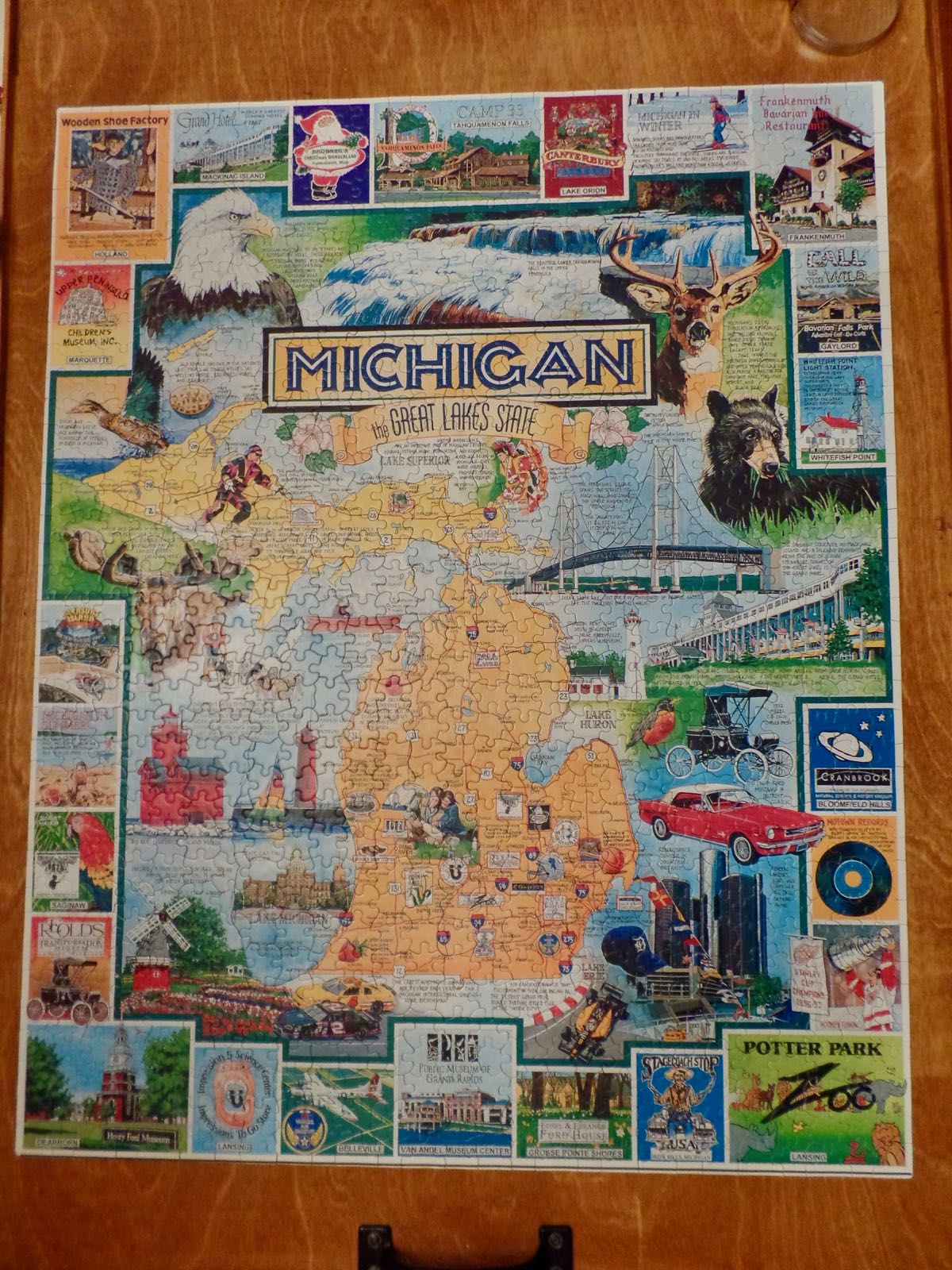 The puzzle's titled ``Michigan: The Great Lakes State'' and features these cute little panels showcasing various sites of interest around Michigan. Lansing gets a remarkable five items, including what seem like really local things such as the city zoo or the Impression 5 hands-on children's museum. That sounds out because there wasn't anything Ann Arbor.

bunny_hugger was able to use the dates when some of the things featured here opened or closed to narrow down the most probable window for this thing's original printing to within about three years in the mid-90s. 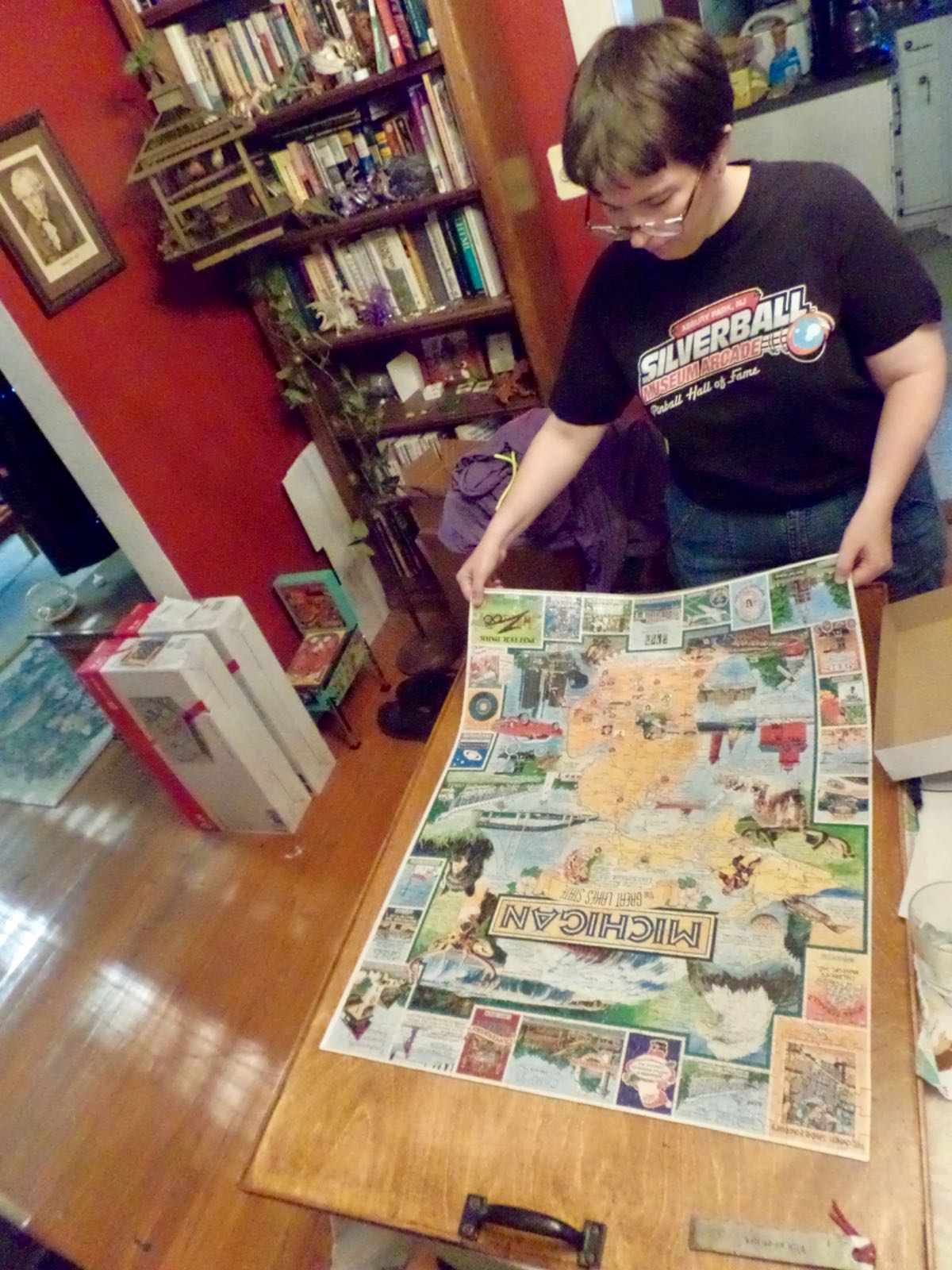 And here's the most satisfying part of a completed puzzle: seeing just how far you can lift it up! Note in the background those two window fans I was talking so much about the other day. 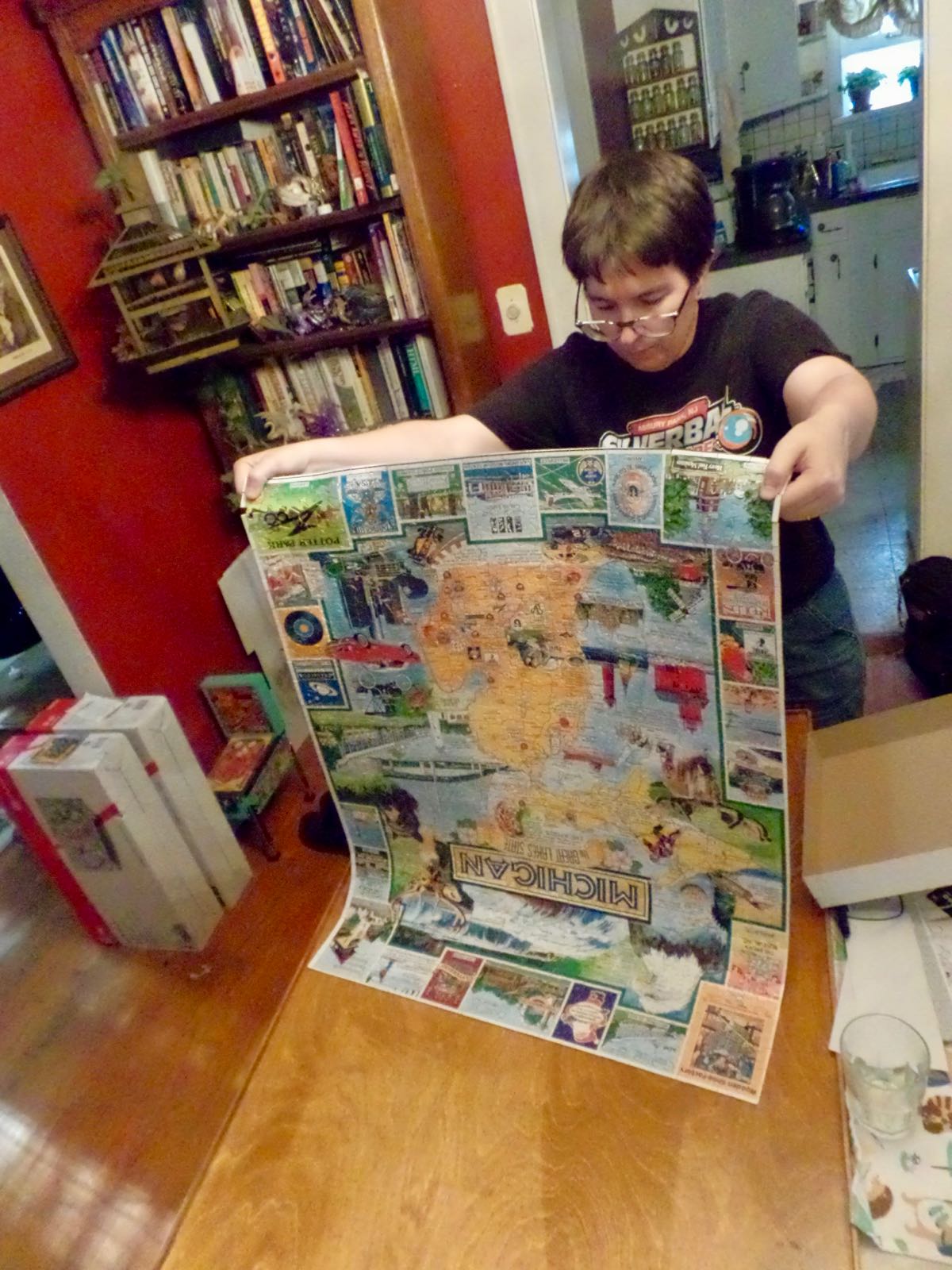 The puzzle turns out to hold together extremely well;

bunny_hugger was able to pick it all the way up without it falling apart, and I think she was even able to lay it back down without pieces getting ruffled out of place.

Trivia: Apollo 15's Service Propulsion System engine suffered from an intermittent electrical fault on one of the two banks controlling valves. After testing of the fault on Bank A during the second midcourse correction, NASA chose to have all service propulsion engine firings except lunar orbit insertion and transearth injection done exclusively on Bank B. Source: Apollo By The Numbers: A Statistical Reference, Richard W Orloff. NASA SP-4029. (I haven't been able to pin down exactly what the banks were controlling, and apologize for that spot of vagueness. It was evidently a minor issue as it doesn't get discussed much in the Apollo 15 histories.)