bunny_hugger having finished a big project, and me seeing no particular crises developing at work, we went to Michigan's Adventure. We hadn't been there since September 2019. This seemed like a good time to go. Parks are usually busy in August, and we couldn't use the midweek lull. Michigan's Adventure isn't opening Tuesdays and Wednesdays this season, probably for staffing shortages. Thursday I had a work meeting scheduled. So though the weather was against us --- it was a gorgeous hot day, the sort of thing that encourages people to go to amusement parks --- this was our best chance to see the park.

We had to stop, before getting really out there, to pick up trophies. We'd needed to get the trophies for the pinball league Zen Tournament scheduled for Tuesday. It turns out we could have waited a week, but there was no way to foresee that. Not a serious delay, although I did worry that the trophies would bake in the trunk space of my black car all afternoon. Not so, although

bunny_hugger's eyeglasses would turn slightly molten over the day. If we'd thought of it we should have put them in the thermos bag.

I was also concerned I wouldn't exactly remember how to get to the park. It turns out not to be too hard: drive west on I-96 until its end. Then north on US 31 for about ten miles. Get off at the exit with the ``Amusement Park'' sign. It's the first light on the left. This was, we realized, the first time we'd been on I-96 any farther west than the farmers market where we get vegetables since February of 2020, which is amazing considering we used to go to Grand Rapids every other week and Fremont once a month. The important thing is even despite all the change since September 2019, Michigan's Adventure is still basically invisible until you are in the parking lot.

At the parking lot gate I asked for a park map. Rumor is that parks are using the pandemic as an excuse to stop giving away maps and I wanted to know early on whether that had come to here. The attendant said she didn't have any but that we could get them inside the park. And we did, although they weren't, like, sitting in a stack in the souvenir shop. When we did buy souvenirs --- I finally got a Michigan's Adventure shirt, twelve years after my first visit there --- I asked the cashier for a map and she got confused, in part because there was also some weird issue happening with my season pass discount and my credit card needed a second try. She never got back to the map and I let that go. Grabbed a bunch from the information desk at the front of the park, on the way out. We don't really need more than two, as souvenirs of the year, but I want the park to know physical maps are in demand.

Also in demand: pop. It was 90 degrees and not a cloud in the sky; it felt hot. After getting in the park --- they waved everyone through the metal detectors, with one of the screeners giving high-fives to everyone in my horrified line, but had us hold our passes up to the scanners ourselves --- we went to one of the soda stations. The all-you-can-drinks season pass is easily the best amusement park purchase we've ever made, and a hot day like this where we kept going back for another twelve ounces of Coke Zero really proved it out.

Another early disappointment: the Kettle Corn stand was not open. I had a slender hope it might open up later in the day --- such things have happened --- but given that no park has had enough staff this year that seemed unlikely. If they had the extra staff they'd probably send them to a stand that sells more than the one thing. And then another startling moment: the petting zoo wasn't there! The facilities were, but none of the animals were, nor was there a sign saying what the hours were or anything. I don't know if this is because they've given up on the zoo, or if they didn't want to devote that many people to animal care in this second plague summer. (Possibly also they figured to avoid encouraging people to cluster around a goat or fluffy chicken or something, too.)

Shivering Timbers, the park's big mile-long wooden coaster, was running; that's the one that goes along the edge of the parking lot, and we saw its train going. The ride had a shocking accident a couple weeks ago, when one train was somehow released from the holding station before the other hand launched, and they collided. Only at something like ten miles per hour, but still enough to damage both trains. So they've been running only the one (repaired) train since then, and we feared how bad that line could be. So we picked as our first ride Wolverine Wildcat, the park's other (and older) adult wooden coaster, the one that's a near-clone of Knoebels's Phoenix.

Was that decision a mistake? Well ...

Find out tomorrow, if I get my writing done! Meanwhile enjoy some more pictures of things we saw on the way to Wolverine Wildcat. 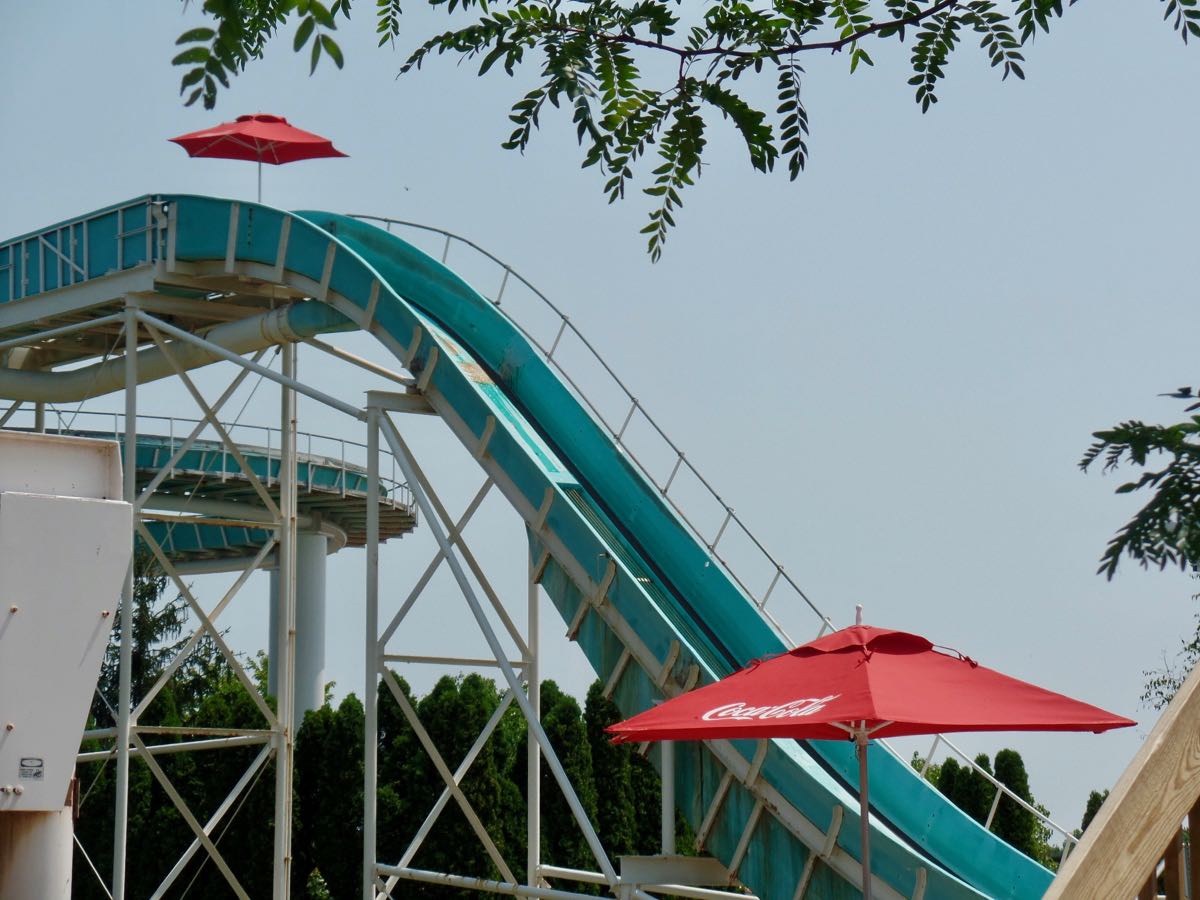 Loggers Run, the log flume, shocking us by being closed! And dry! On a day so hot and sunny that we'd have given the log flume a try. We were startled. 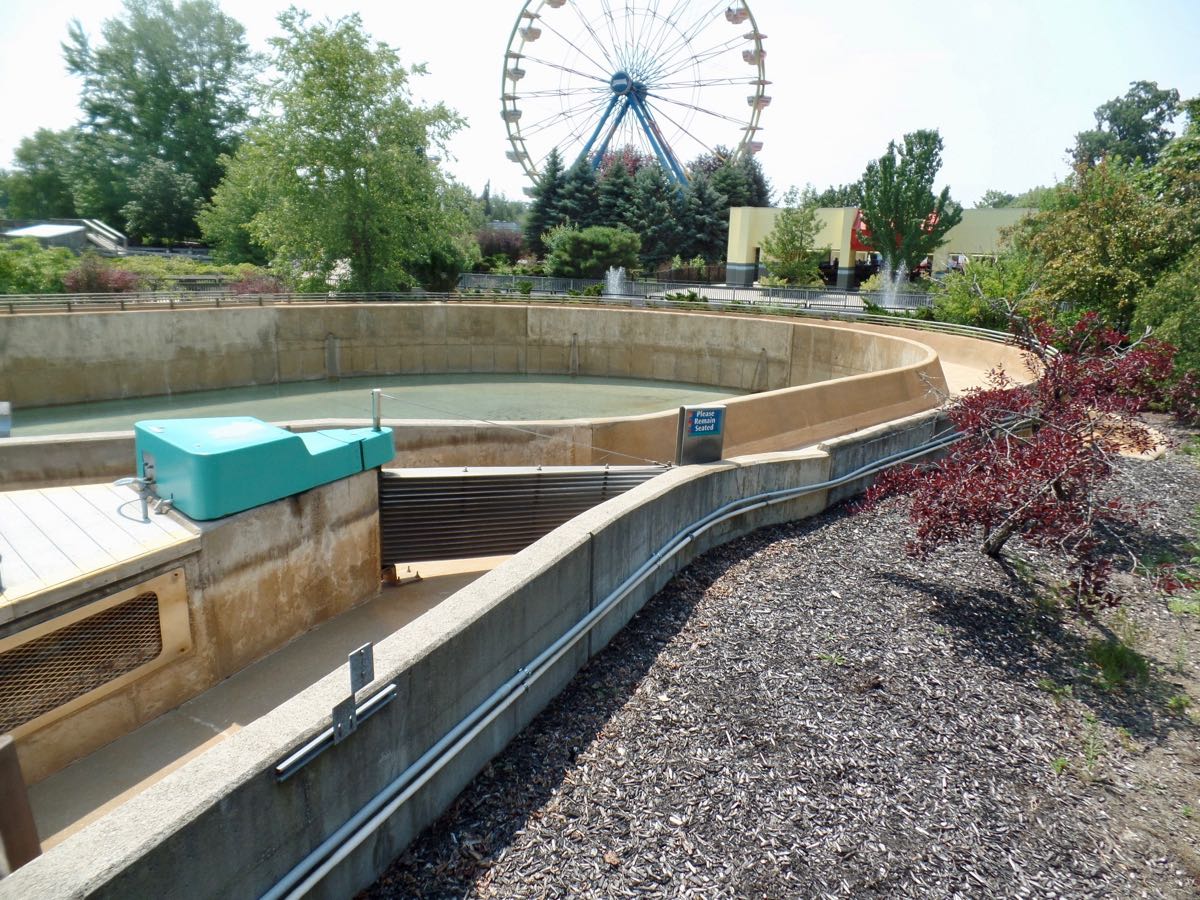 The trough at the end of the big drop, with the return to the station. You can see there's not a drop of water in the channels there. Trivia: The Apollo 15 lunar surface experiments package was set up about 360 feet west-northwest of the Lunar Module. Source: Apollo By The Numbers: A Statistical Reference, Richard W Orloff. NASA SP-4029.