You've left us up to our necks in it

Wolverine Wildcat: Michigan's Adventure's oldest wooden coaster, and their second-oldest roller coaster at all. The line wasn't too long, and we could finish our pop and notice, like, people still threw hairbands onto the roof of the train tunnel. Also kids still asked their parents why people threw hairbands there. There is no answer besides ``they do that, sometimes''. I was happy the tradition was still alive.

We were two trains from riding when ... some kind of announcement happened. We were busy talking, so missed the start, but it was something about the restraints in one car.

bunny_hugger heard someone ask why they can't just rope off that row, so we guessed that one of the restraints was failing. The ride operator told us it wasn't clear how long the ride would be down, we could wait, or we could exit the queue. We figured to wait a while ... and it turned into a surprising while. What happened was someone found ... something, damp, possibly a body fluid, under one of the restraints. So after a good long while in came ... a security person, who inspected the restraint, and confirmed there was something needing hygienic cleanup. The security person called in someone. And then after another good long while --- my timestamps indicate all this took about 15 minutes, but it felt like twice that --- in came another security person, this one with a box of wet-wipes, who cleaned it off and gave the thumbs-up and everyone was back on their way.

So this all was a bit baffling. Not stopping the ride to clean up a body fluid (blood? Probably?). That would be necessary even if it weren't the second Pandemic Summer. But why the need to call security? I can imagine not having enough sterilizing wipes for every station, or for wanting the used ones to be taken to a separate trash bin. But why is that security's job rather than maintenance? Granted that at a low-key park like Michigan's Adventure security probably has more time, but then, why the first person just there to confirm the issue existed? Why not send someone out with the sanitary wipes just on spec?

There are obviously factors we are unaware of in all this.

Operations changes and challenges hit all over the park. For example, in our last minutes of the day we were startled to learn they'd closed the queues for Shivering Timbers and for Wolverine Wildcat before the park closed. Usually they've kept the queue open, and run the roller coasters as long as it took to get everyone who was in line by (in this case) 7 pm. This time? We'd heard that Cedar Point had closed the queues on its biggest lines early, to keep staff from having to work sometimes hours after the park closure. It's a new thing for here and I hope it's just a for-the-duration change.

We went next to Shivering Timbers where we found they'd put up some 'Expected Wait Time from This Point' signs, warning of 30- and 45-minute queues. This is new; Michigan's Adventure has never had any of these before. Shivering Timbers and Thunderhawk, their newest-but-still-13-years-old stel coaster, had these queue signs. Nothing else did that we saw. Shivering Timbers was running fine, even if we kep thinking how speedy this would be if they were running both trains. But given the collision a few weeks before I understand if they need time to be confident again in the brakes, and in the training. It's possible also they're still fixing one of the trains, although I'd be surprised if the issue were that.

We've worried about Shivering Timbers getting rough again. As far as we could tell it was running pretty smoothly, though. It's a big wooden coaster, and they get more rattle-y than steel coasters will. But the ride either had good care while we were away, or we're so eager to ride things we don't mind a little rattling. The brakes felt sharp.

While waiting we overheard someone else talk about being ``on line'', a Northeastern phrase that I get no end of guff about. One of the two people in this conversation wore a Brooklyn Nets hat, so maybe they are amusement park fans taking a tour of midwestern parks. They didn't have any out-of-the-area coaster shirts on, though, so there's no way to be sure.

The other roller coaster we would ride was Corkscrew. We actually got two rides on, over the day, its line not ever being too long or slow-moving. Also that's the ride we've seen rabbits grazing near, although not this trip. It's the oldest roller coaster at the park, the ride which really marked the place's conversion from a petting zoo and deer park into an amusement park, so we're glad it's there and popular and running well. At one point we did see everybody leaving the queue, for reasons we can't guess. Maybe something similar to what happened at Wolverine Wildcat.

One we never rode: Zach's Zoomer, the junior wooden coaster. I could swear we saw it running, some. At one point we walked past and saw a line of people outside the roped-off queue, hopeful that something was going to go. But we missed this one, down for maintenance(?) each time we checked near it. We also didn't ride Thunderhawk, although we walked up to it. It had too long a line for us, considering it's not really a favored line. The restraints tend to be head-bashy.

And then there's Mad Mouse. When we entered the park it wasn't running, but people were sitting in the cars. The ride has sometimes done that, having long periods of being down or being unreliable. I think we rode it once the 2018 season, and that on a day we had to try three times to catch the ride. Eventually we did see it going, but slowly; when we checked the queue it was too long for our tastes. (Now that I think maybe it also had signs saying what the wait-from-this-time should be.) Given the long times that no cars were running I have to suppose it was maintenance issues. Maybe this is what kept maintenance people from wiping down Wolverine Wildcat. But the operations on Mad Mouse have been getting worse too, as they installed seat belts and getting people into them and checking them slows down a ride that's designed to have people hop in the car, lower the restraining bar, and putter on through. Moreso now, since the ride operators ask you to tug the strap of the seat belt for them, and try getting people to anticipate and understand an instruction. Especially a ride like Mad Mouse that younger kids feel comfortable riding.

We hope to ride it this season, but it might have to wait for a day too cold or drizzly to attract a crowd. Possibly the final week of the season, when the water park is closed and it's just the dry-rides crowd.

That's not all of the park, though. Nor even all of the roller coasters. What's left I hope to reveal for Monday.

Now let's enjoy some pictures of ... not quite getting to Wolverine Wildcat yet! But getting there. 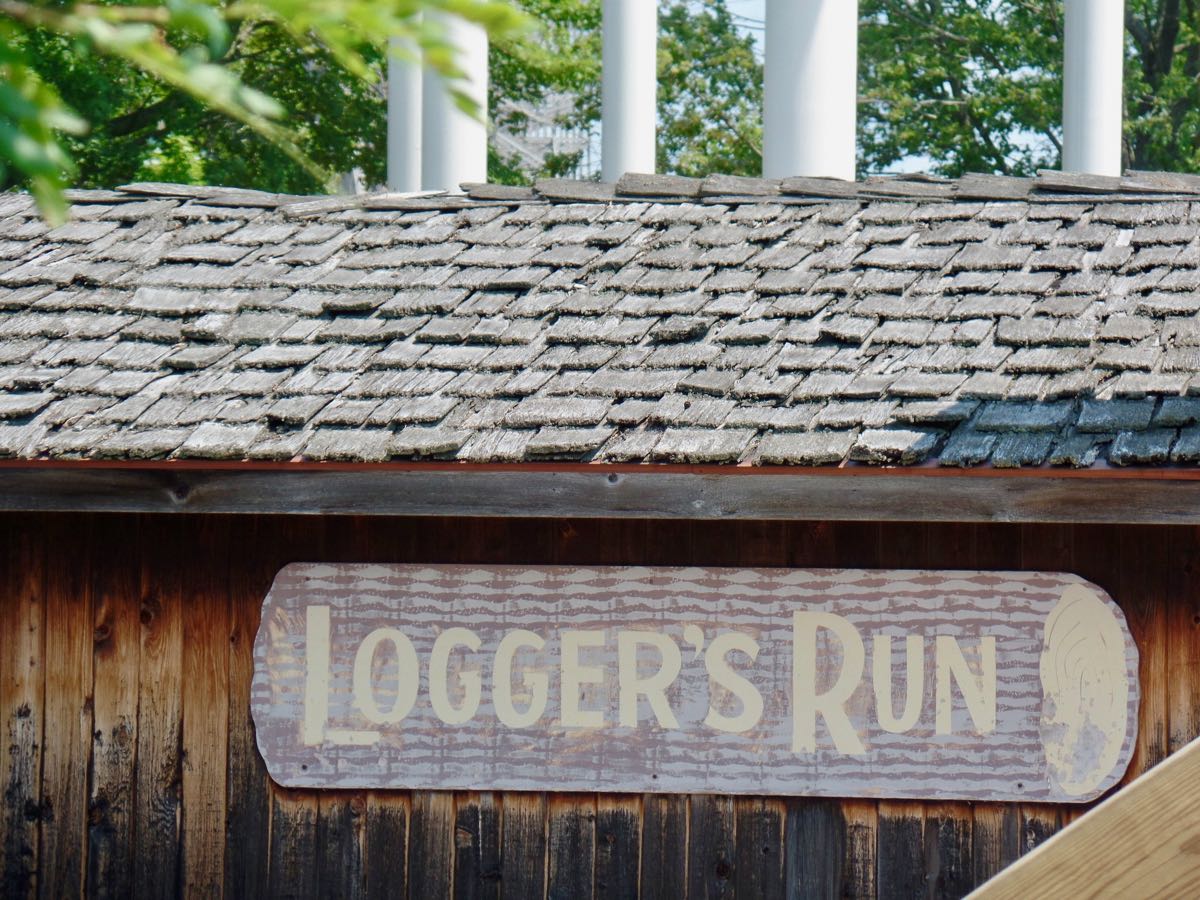 A sign for Logger's Run, hung up as decoration on one of the park buildings inside the log flume.

bunny_hugger confirmed my hunch that this was the sign the ride sign from when Michigan's Adventure was an independent park. They have a more Cedar Fair standard sign outside the ride now. 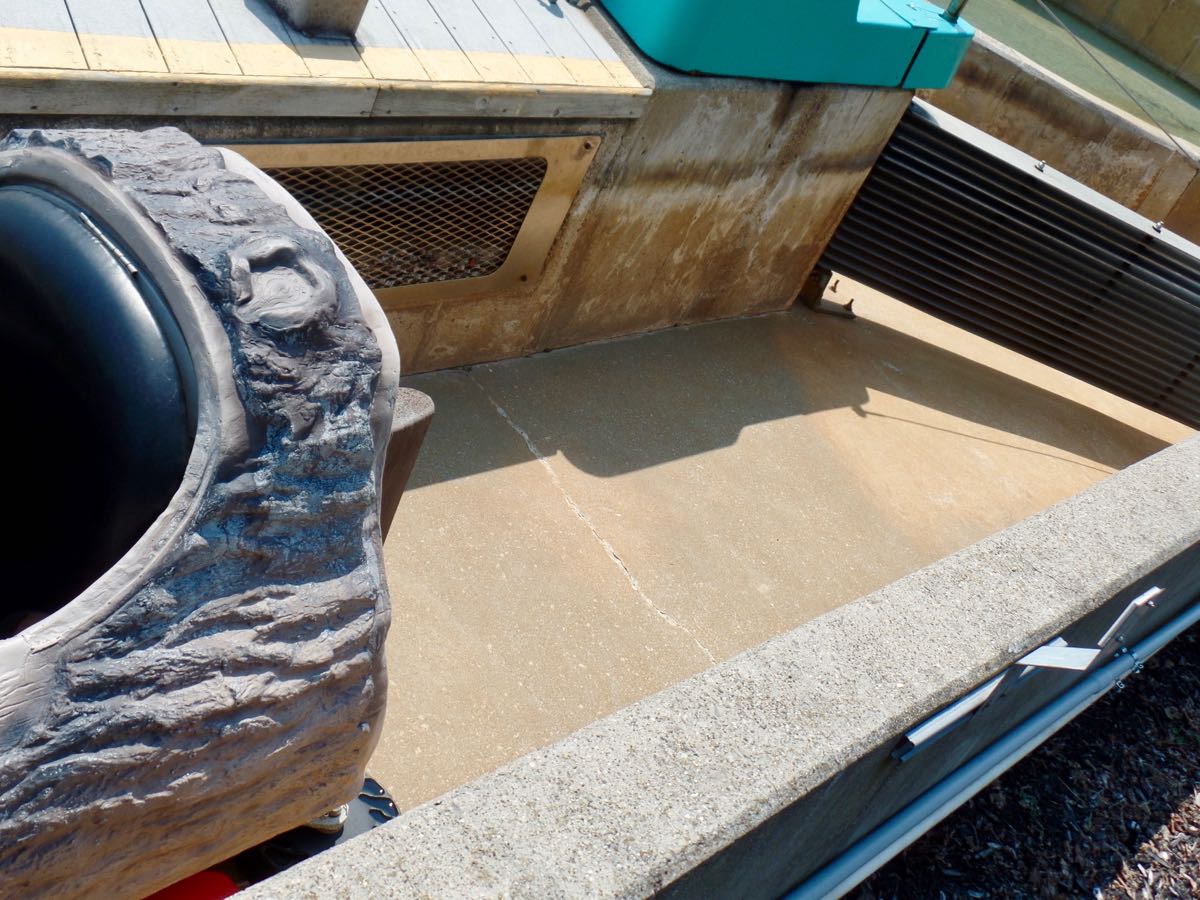 One of the boats in drydock. You can see the diverter where the staff decides whether your boat will return to the left or the right side here. 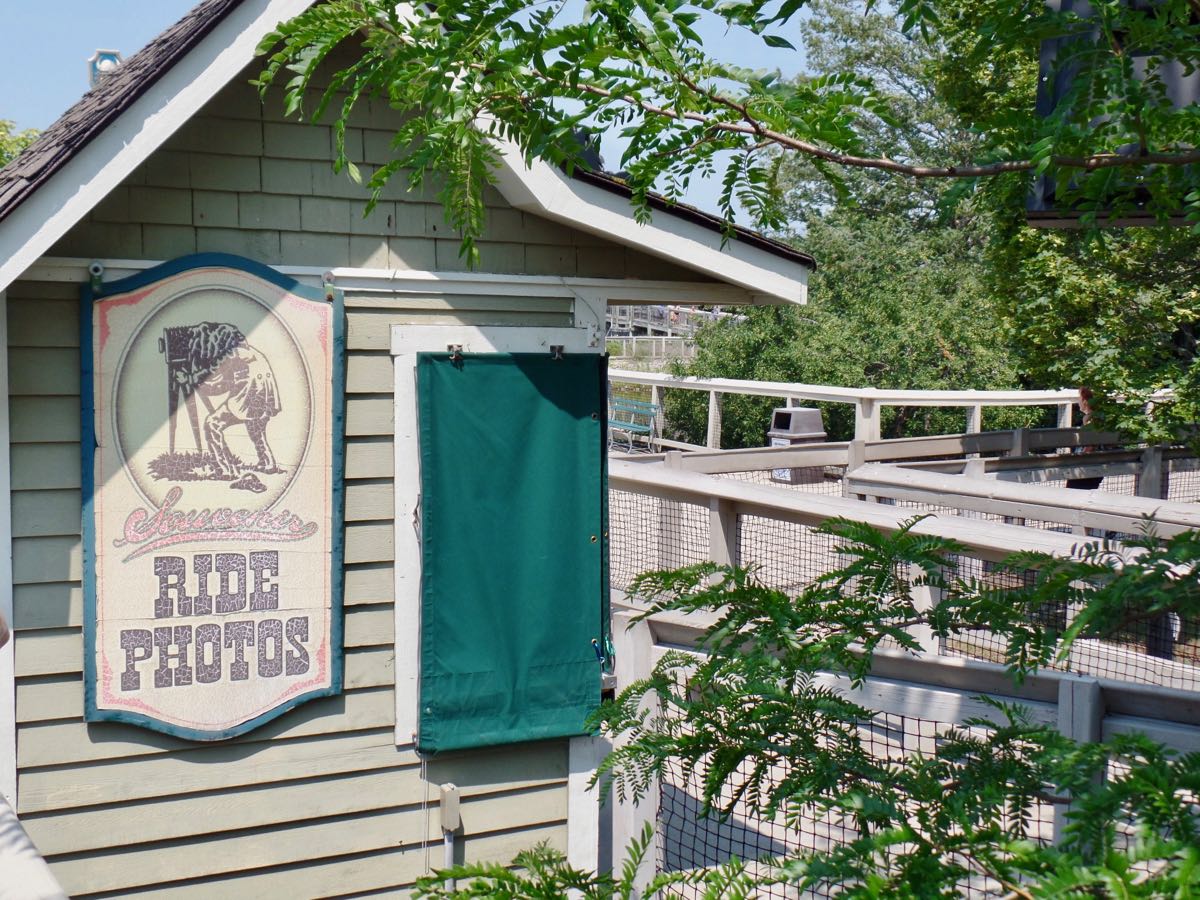 Logger's Run is one of the few park rides with a ride photo, although I don't know whether that ever operates anymore.