Sunshine update. I write this Thursday night, not knowing what Friday will bring. I'm putting this behind a cut again for people who need time to cope with pet health issues, although this is all about getting an appointment for the specialist she needs.

She needs an echocardiogram. Turns out Cedar Creek, our veterinary clinic, just assumed this was a thing you could get at the place with a sonogram they keep sending people to. When we couldn't get the clinic they recommended, or the clinic recommended by that, or the Michigan State University Small Animal clinic, to take us in I called our vet's to ask what they recommended. They said they'd make some calls and phone us back.

When they didn't phone us back after a couple hours, on Wednesday, I called them, in the evening. They said they'd call us back when they had something. I called Thursday morning, and then again Thursday evening. I want to be clear, I was making one morning call and one call just before close-of-business, which I think is not excessive considering we don't know how long she has.

bunny_hugger also thought to ask the Michigan House Rabbit Society's Facebonk page, about whether anyone had gotten an echocardiogram of their rabbit, and where. This gave us a lead for a place in Clinton, Michigan. Possibly everyone had assumed we wouldn't travel that far, which is absurd; we'd go to anywhere in the lower peninsula and probably would accept the upper peninsula if needed. This also let us know that we have not been trying to do something unknown to all humanity.

So turns out there's more than one Clinton, Michigan. My web search turned up one that's southwest of Ann Arbor, near the Irish Hills, a surprisingly zippy 70-80 minutes away if you get the right path. Not bad at all. This is the wrong Clinton, the source of some frustration when

bunny_hugger spoke of hating the prospect of driving around Detroit. No, the Clinton she meant is Clinton Township, a Detroit suburb. On the far side of Detroit, because of course. There is also a Clinton Township in Oscoda County, in the northern part of the lower peninsula. Which I think all puts paid to the story that Zilwaukee, Michican, was named that because they wanted to trick settlers into thinking they were buying tickets to Milwaukee but the Post Office wouldn't let them just duplicate the name. There is also, of course, a Clinton County, which is one just north of us.

Writing now on Friday: Not that this abundance of Clintons matters. They had nothing available before the 29th of September. They suggested that perhaps the Oakland Veterinary Reference Service might know someone who could see Sunshine sooner. Oakland did not, although they took a message for a Doctor Reebe(?) who might get back to us Monday.

Back to the Michigan House Rabbit Society. Someone had years ago gotten a heart sonogram done at Veterinary Cardiology Consultants in Novi. We left a message and they called back saying no, they didn't, but perhaps we might try the place in Clinton, or the Oakland Veterinary Reference Service, or Blue Pearl which we had to listen to a couple times to hear if we got the words right, or some other place again. That other-place-again had a web site indicating they wouldn't look at rabbit hearts. I called the MSU Small Animals Clinic --- again --- and they said they were booked through September and were not yet ready to schedule anything in October. But they suggested we might try Cedar Creek.

Finally I listened to that message again, and we looked up Blue Pearl, which turns out to be a nationwide chain of veterinary services. And which is, of course, owned by Mars, the notorious secretive and soap-operatic candy bar company. An outgrowth of their domination of the pet-food market, it turns out. Turns out Blue Pearl has facilities all over Michigan except not Lansing. Their Ann Arbor clinic, though ... does not do rabbit cardiology. But they offered that Southfield might, and Emergency Veterinary Services would.

Emergency Veterinary Services, in Ann Arbor, said they will, in fact! They apologized that they only do rabbit ultrasounds on Wednesdays, and put me on hold to check their schedules, and then offered Friday the 13th. Yeah, I know. But we took the appointment --- I would without exaggeration have driven out right this minute if they offered it --- and hopefully will be spending next Friday getting our rabbit diagnosed. 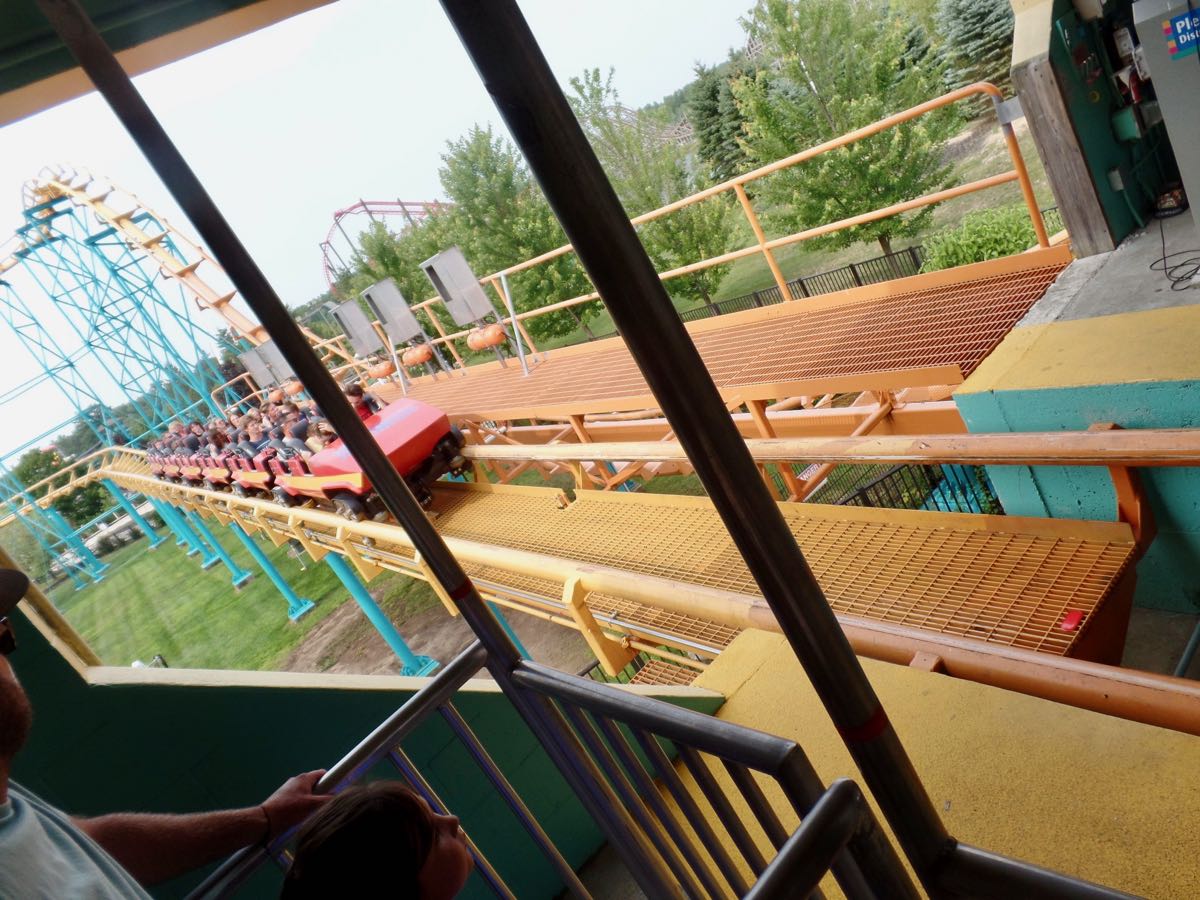 Corkscrew train returning to the station, seen from inside the station. We nearly always get a back-seat spot on this ride. It's easier to take the two corkscrews from the back of the train. There's also usually less of a line for it. 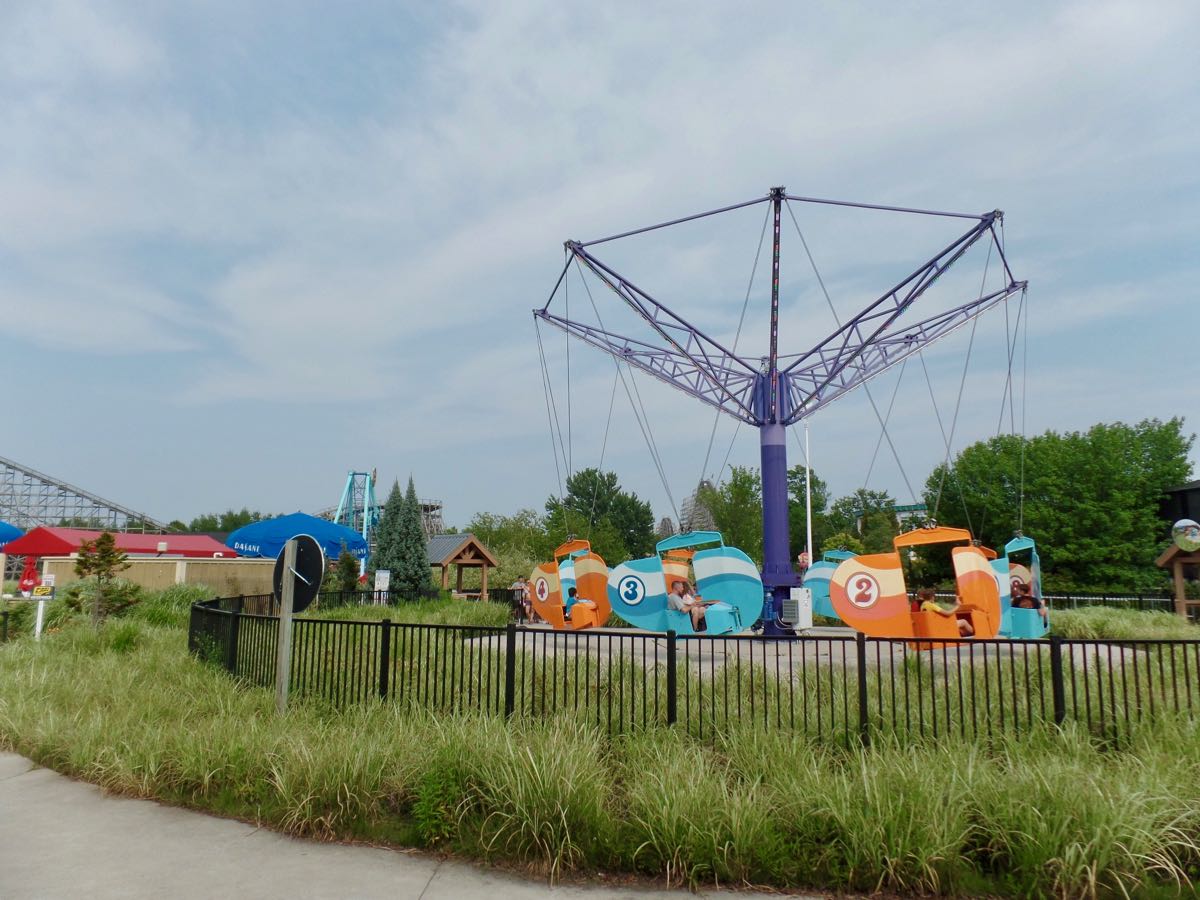 Lakeside Gliders, a flying scooters ride put in back in 2013. It's a nice ride. You in the scooter can turn the sail up front and change which way you're facing, in a range from pointing down to pointing up. 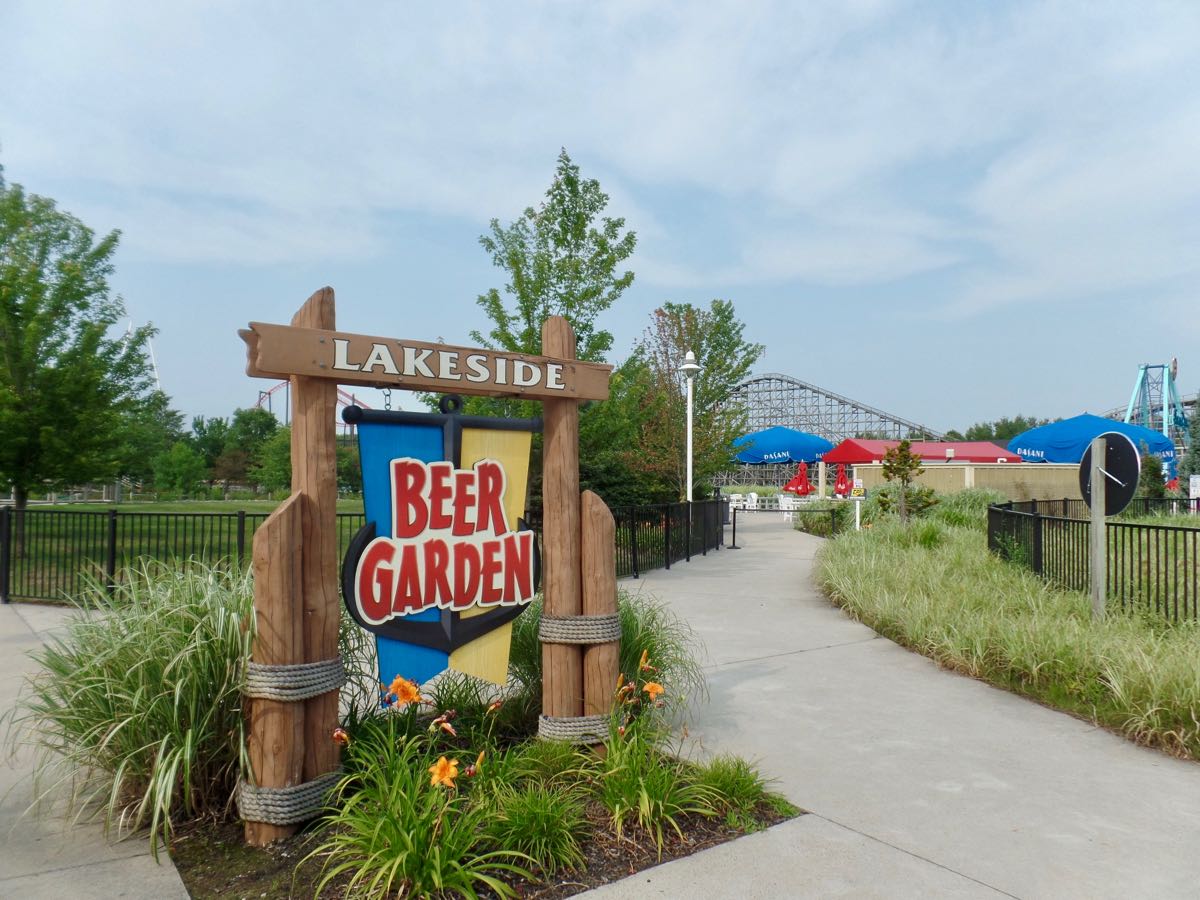 The Beer Garden was put in at the same time as the Gliders. And was a shock: a place to drink alcohol at a park as low-key family-oriented as Michigan's Adventure? I guess it's working for them, although it was closed the day we visited. It replaced an upcharge-attraction go-kart ride.

Trivia: 778.3 seconds elapsed between Apollo 15's entry into the Earth's atmosphere and splashdown, the fastest entry in the Apollo program. Source: Apollo By The Numbers: A Statistical Reference, Richard W Orloff. NASA SP-4029. (The collapsed parachute --- it landed on only two --- contributed to the hurry.)

Currently Reading: Lost Popeye, Volume 8: Where There's A Will There's A Relative. Tom Sims, Bela Zaboly. Editor Stephanie Noell. Well, that's sure a story that ended up going in four different directions without ever hitting a plot, and then stopping. No piece of it was bad, understand, but it was a bunch of Ranch Hand Gags and not any kind of story.