Oh look out you rock-n-rollers

The Lansing Pinball League traditionally holds a for-fun split-flipper, ``Zen'' tournament, two weeks after the season finals. We held it last week, instead. This because the league wanted to do something since it seemed safe to hold modest public gatherings again, but the International Flipper Pinball Association wouldn't sanction the resumption of league play until August. You might think, wait, last Tuesday was August. This is because we planned to have it the 27th of July, but the bar had to close to give staff bereavement time.

So this was our first fairly organized, regular-ish pinball league event since March 2020. A lot of the league was there. CST and his wife even attended, forming a team of their own. When we determined we had an odd number of players PHD, who ordinarily bows out of anything, even accepted the chance to play. The format: best-of-three matches, with double elimination. To be knocked out you have to lose two of three games, two rounds. Our hope: that this doesn't go on so long that the bar closes, as closing time's advanced to 1 am and the staff starts getting antsy a little after midnight.

bunny_hugger and I were a team, as we usually are. And had a startlingly good first round, beating CST and his wife on The Beatles (our best-loved game) and Tales of the Arabian Nights. We then lost our first match, against the top-seeded pair of MWS and JAB. I was not despairing, though. Being knocked out, after all, would let me get some time on games I haven't had the chance to play. And it would let me sit at the organizers table and tell people where to go and how to fill out their scorecards for crying out loud. People ask whether it's ethical for the people running a tournament to also compete in it, and there are issues that have to be taken seriously there. But there is also a great practical need for traffic management in anything with the slightest difficulty to it, such as double-elimination tournaments.

But then something weird happened: we didn't lose. Part of this is that each round we got to pick one game and made that The Beatles. We both love the game, which is no guarantee of success, no. But we've put a lot of time on it. And got a couple of key shots down. And, for some reason, my timing was absolutely perfect for making this one loop shot. There's two modes where that loop shot is incredibly lucrative. It's also the jackpot shot for the multiball. One game I hit something like eight loops in a row, which is just astounding. We got on the high score table playing split-flipper, which is a thing that just barely makes sense.

We'd have to play something else too, after our Beatles win, but we kept eking out wins there. I'm not saying good wins. We beat out DMC and DJN with an eight million point game of The Addams Family, a game you can normally get ten million on just from the skill shots. But they were wins. We even knocked out CST and his wife a second time, amazing to us.

And then at long, long last, we got to playing the final undefeated team, which was MWS and JAB again. Huh. They had pick of the first game, so took us to Game Of Thrones, a table I can't play normally, never mind coordinating as a team, and they beat us on it. We went back to The Beatles, another grand win for our side. And then they picked for the tiebreaker game Batman 66. I love this game.

bunny_hugger likes the idea but does not understand the rules at all. I have a good instinctive understanding for what to do at any moment, but could I articulate it? Not so much. I figured this would be a sad but understandable game to go out on.

Then ... it wasn't. We were able to get a two-ball multiball started, and while we couldn't build that into the three-ball multiball that would really have blown the game open? We were able to score well enough, and score bonuses big enough --- it's a crazy bonus-heavy game --- that we won. We had defeated MWS and JAB.

Not completely, though. This was just their first defeat. To win the tournament would require that we play them again.

How that turned out I plan to share tomorrow. 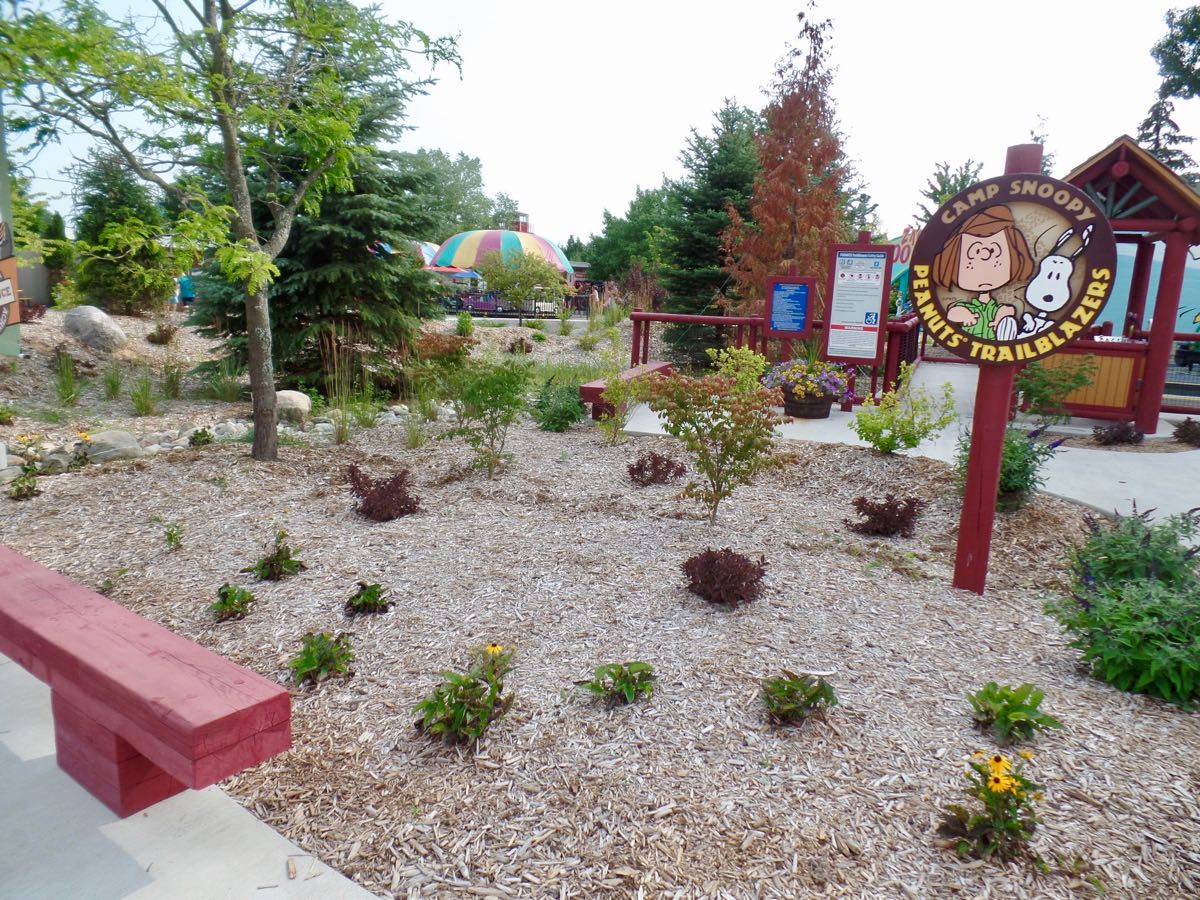 Some lovely, really, fresh-mulched flowerbeds and the sign for Peanuts Trailblazers, one of the kiddie rides. 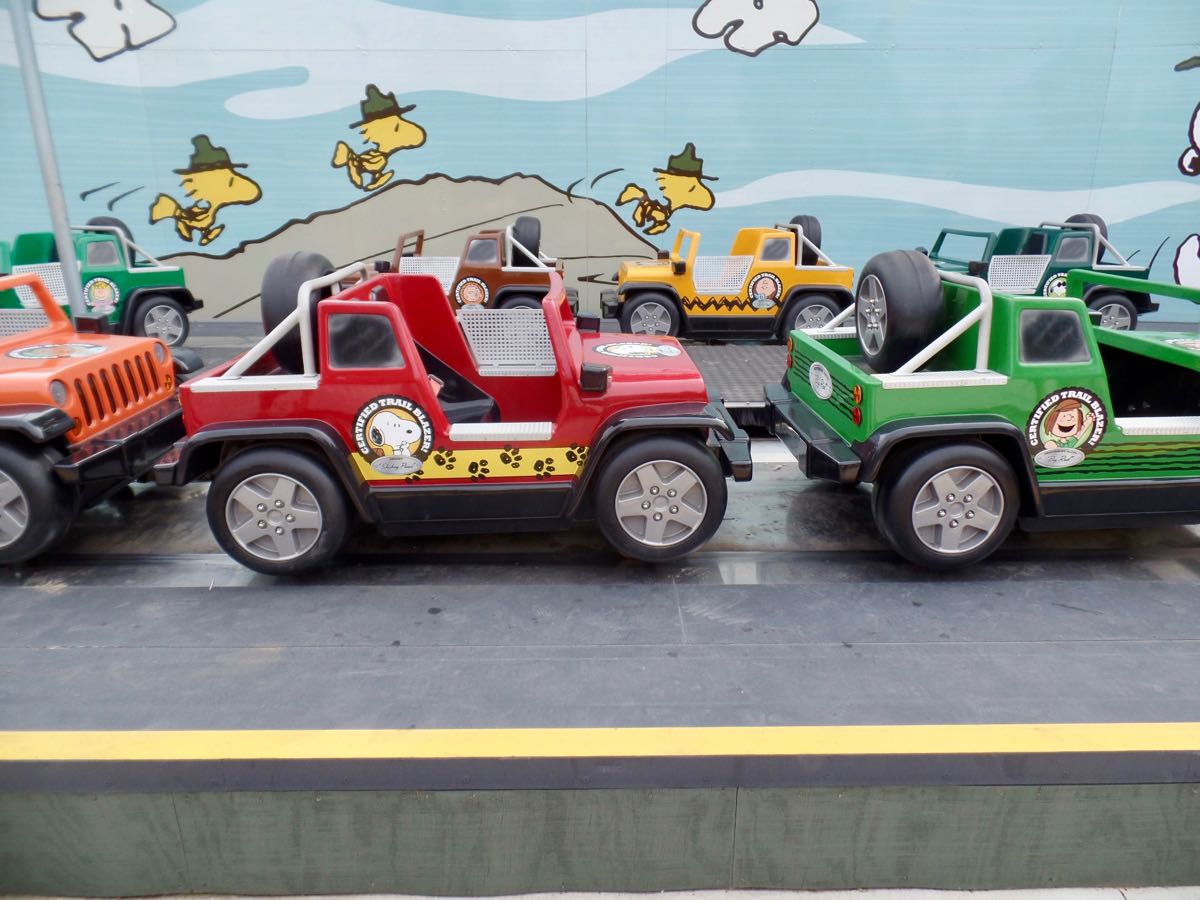 Peanuts Trail Blazers, as the words are broken up here, is cute enough little car ride. I love the pictures of the running Beagle Scouts. 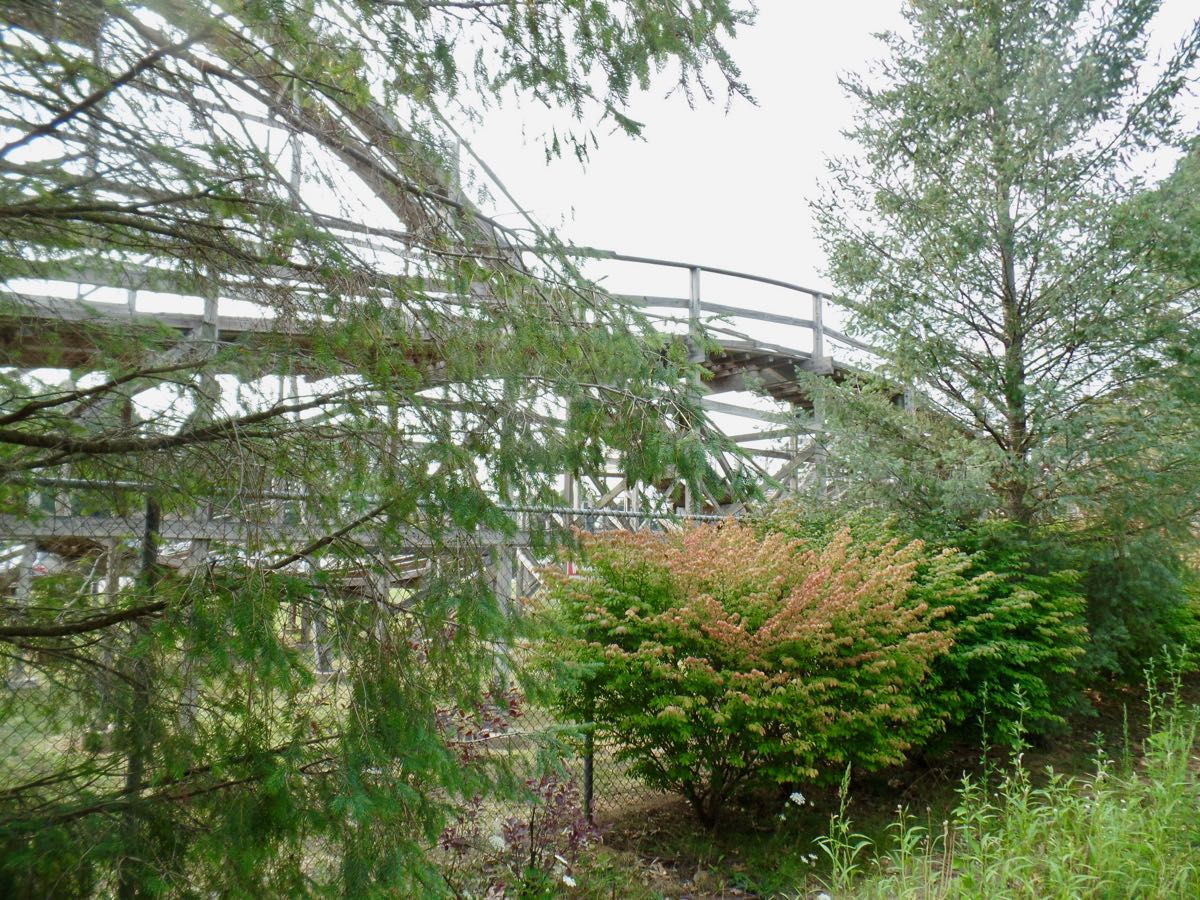 The turnaround of Zach's Zoomer, seen from closer up than we could get a photo of from when Be-Bop Boulevard was there. I'm surprised how much it looks like a structure claimed by the forest when it's really quite clear of plants and it's not at all a forest in this area.

Trivia: The first Mighty Mouse (originally Super Mouse) cartoon was released the 16th of October, 1942. The second was released the 27th of November that year. Source: Terry-Toons: The Story of Paul Terry and his Classic Cartoon Factory, W Gerald Hamonic. Hamonic describes Terry as realizing he had a hit on his hands which, fair enough, although he makes it sound like the early reviews from theater owners and audiences were so positive he rushed the second cartoon into production. I have trouble believing it would be possible to make a cartoon in that six-week span. Possibly Hamonic meant that the distributors seeing the earliest completed scenes figured this was a cartoon character with legs. (I notice the next cartoon took until February 1943.)

PS: How July 2021 Treated My Mathematics Blog considering I barely wrote my mathematics blog in July.