The last round of finals for the Zen Tournament. MWS and JAB picked Game Of Thrones to play, which was the right move. They had dominated on the game all night. It's one I barely understand the rules for, although

bunny_hugger knows it a bit better. And they'd beaten us on it once already. We both had lousy first balls.

bunny_hugger and I had a mediocre second ball, too, thanks in part to a mental error of mine. A big part of the game, like any modern pinball, is starting modes. If you can start a mode and multiball? You're usually in great shape.

Well, I thought we had locked our second ball when the game asked if we wanted to start a mode. (In Game of Thrones you can choose to delay starting a mode for a later time.)

bunny_hugger said this was locking ball three, so we were ready to start multiball and should start a mode. I thought we had just locked ball two and should delay the mode. She was right and I was wrong, and the game even cued us to that, by asking about the mode before showing the ball-lock animation. The result is we had a multiball, which is good for points, but which wasn't worth nearly what we needed to catch up even then.

Last ball, MWS and JAB ran the score up to just under 600,000,000 points and we started with about 30,000,000. Game of Thrones is a high-scoring game, though not for me; I've only had a handful of games breaking a half-billion and none under the current game programming. But

bunny_hugger hit the shot to start our selection of modes --- and I remembered what mode we really wanted. It's House ... Targyarean? Something? Anyway, the important thing is it's a mode where you get lots of points if you hit the spinner on the left orbit a bunch, and then shoot a ramp. Nice and easy; you can even hit the spinner from the left flipper, at least in principle. So we did that, hitting it, and racking up lots of points. We heard the crack of the replay score being set, and while we had no idea our score (the animations for this mode get in the way) we knew that was doing great. The game also has a complicated set of time-limited shot multipliers that I don't understand, but the important thing is: we scored something like 450,000,000 points in that one mode. MWS and JAB told us that they, able to focus on the multipliers, were aware: if we had made the ramp shot a few seconds earlier we'd have had even more points and won the game right there.

As it happens, we didn't get many more points. My error, shooting the ball too near the right outlane. We ended somewhere around 550,000,000, which was a loss, but an epic, nail-biting loss. And we had as split-flipper teams put up two really good games of Game of Thrones.

On to our pick, The Beatles. For the first time all night my loop shot timing fails me, and we bomb the first ball. Worse, MWS and JAB have the game of their lives, completing several songs, getting the super jackpot for the songs, getting all the way to the mini-wizard mode of the four-ball multiball Help!. They blast on through, getting a score of over five million points, good enough for Grand Champion on this low-scoring game. And we're putting around 200,000.

Our only option is to have the multiball of our lives. And ... we do? Like, usually the game is good for two or three jackpots (around a quarter-million each) but this time, we just keep getting more of them. My timing on the critical loop shot returns and we rack up many, many points. We get above three million points, which would have been Grand Champion just a few hours before. It's still an uphill battle but we might make it if ... I didn't blow it, and lose the ball. We are, at last, beaten.

But on another epic game, one where both of our split-flipper teams get on the high score table. As is custom we enter 'LPL' for Lansing Pinball League as initials. MWS and JAB won the trophies, but they had to work hard for it.

We end up being there until after midnight, a good long hard night of playing. And, just, wow. We're playing great, especially for how long we went with no physical pinball except our own ancient Tri-Zone to practice on.

Miscellaneous other things of the night. I got my first two games in on Stern's Teenage Mutant Ninja Turtles, the new one. The first game I had no idea what I was doing, but got a multiball and a couple episodes started and earned a replay. The second game I had theories about what I was doing, and got two multiballs started and earned about one-third the score. I have hopes for recovery in my next game.

We closed the night on a four-player game of Stern's Star Trek, which I've played only in virtual form for sixteen months. But gotten really good at in virtual form. I knew it would be a hard adjustment going back to the real thing. I, in fact, stank up the joint on my game. But I often stink the first time in a session I play the virtual Star Trek too. Unfortunately by then it was exhaustingly late so we went home rather than see what my luck would be a second game.

The bar had its live DJ there again, playing quite loud music from 9pm on. The crowd of people dancing, as had been there the first night (our Silver Balls In July mini-tournament), did not reappear. A couple times over the night a couple people danced but that was it. I don't want any creative projects to fail, especially ones with a heritage; this DJ night was a transplant from Mac's Bar, destroyed by renovations. But I wouldn't mind if they decided this was a tradition more popular on, like, a Thursday, or some other non-league night. As with my amusement park trips, I want the bar to be successful and as crowded as pandemic safety allows --- but not on the days I choose to go there. Those I want to be all-but-abandoned.

Speaking of amusement parks which were not all-but-abandoned: Michigan's Adventure. Here's more pictures around Camp Snoopy. 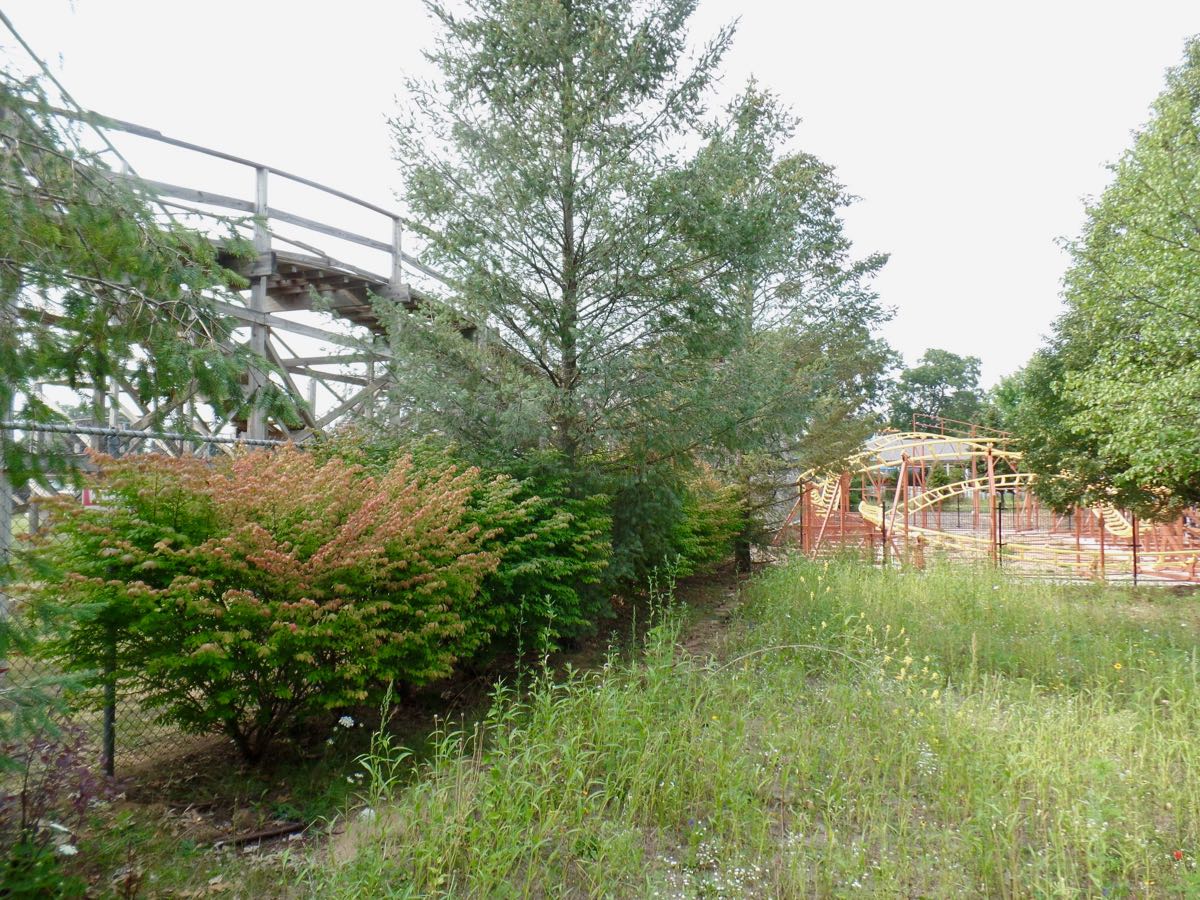 The end of Zach's Zoomer, and the body of Woodstock Express, formerly the Big Dipper. Also, a bunch of space that's been given a wild flower seed mix and allowed to do its own thing, which came out quite nice. 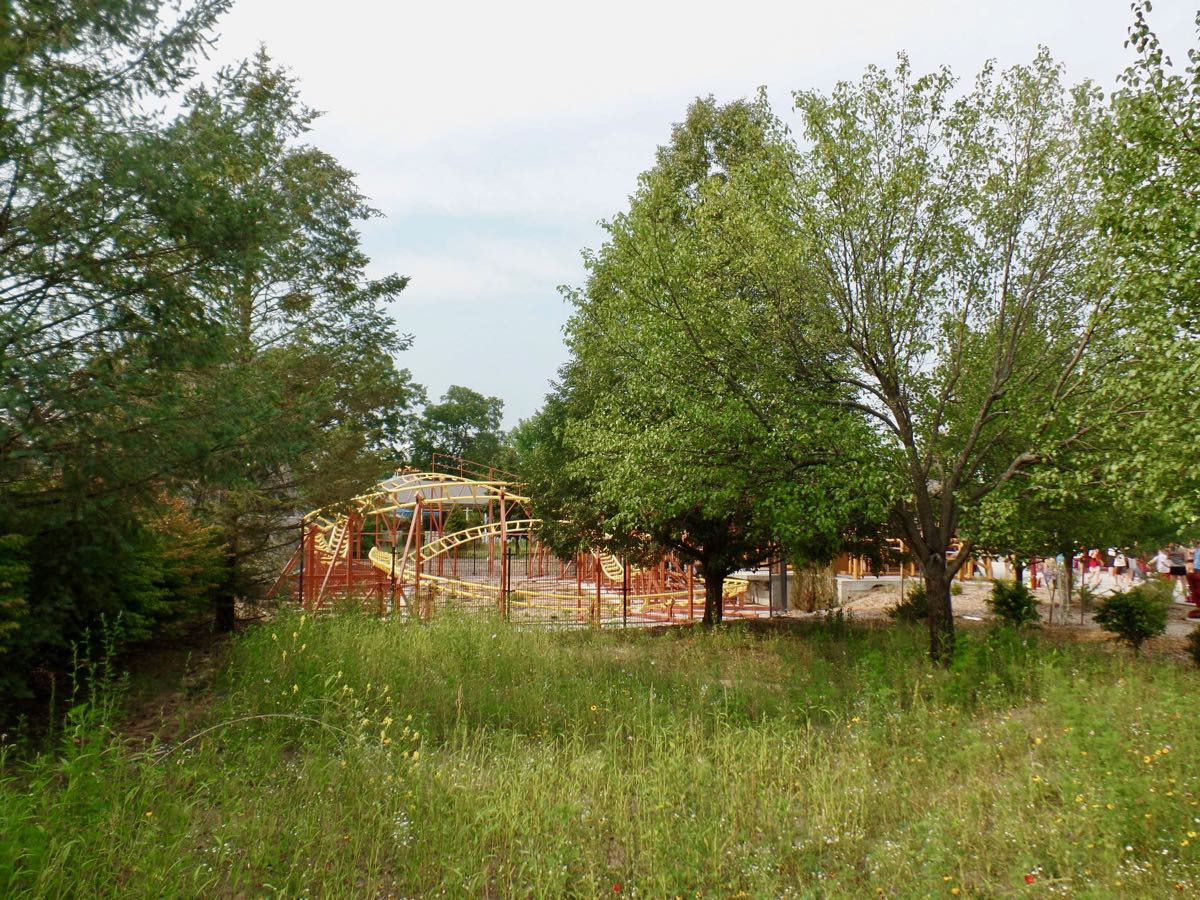 Looking just at Woodstock Express, and some of the trees left over from Be-Bop Boulevard, and a lot of wild flowers that are okay in a picture but pleasant and calm and reflective in person. 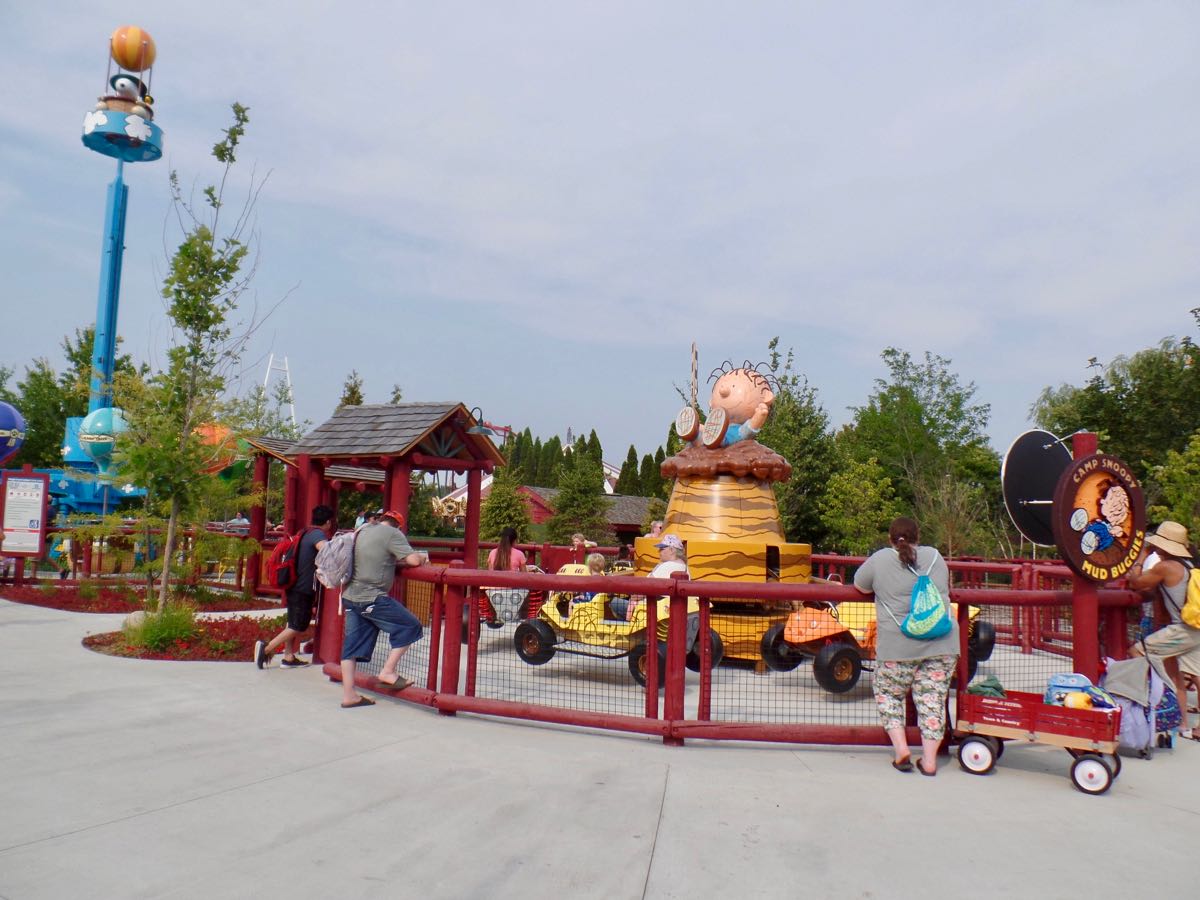 Pig Pen at the Mud Buggies, a rare case where the theme of a ride has something to do with the Peanuts character tied to it! Except that there isn't even prop mud around the cars.

Trivia: The space shuttle orbiter's on-board computer network, in its original design, weighed over 17,00 pounds, more than the weight of an Apollo Command Module. Source: Safely To Earth: The Men and Women Who Broght the Astronauts Home, Jack Clemons.