I made a stupid mistake yesterday that's got my car in the shop, possibly for weeks, and while we're all okay physically and really only a bit inconvenienced, boy, it's a lot of inconvenience and a heck of a kneecapping after I was starting to pull out of my existential dread. On the other hand, as Lucy Van Pelt observed, there's nothing like a little physical pain to get your mind off your emotional problems, and there's nothing like thinking a moment's stupidity destroyed your car to get you out of thinking how the pandemic is never going to and and we're just going to get more and more miserable.

Anyway here's my humor blog the past week. 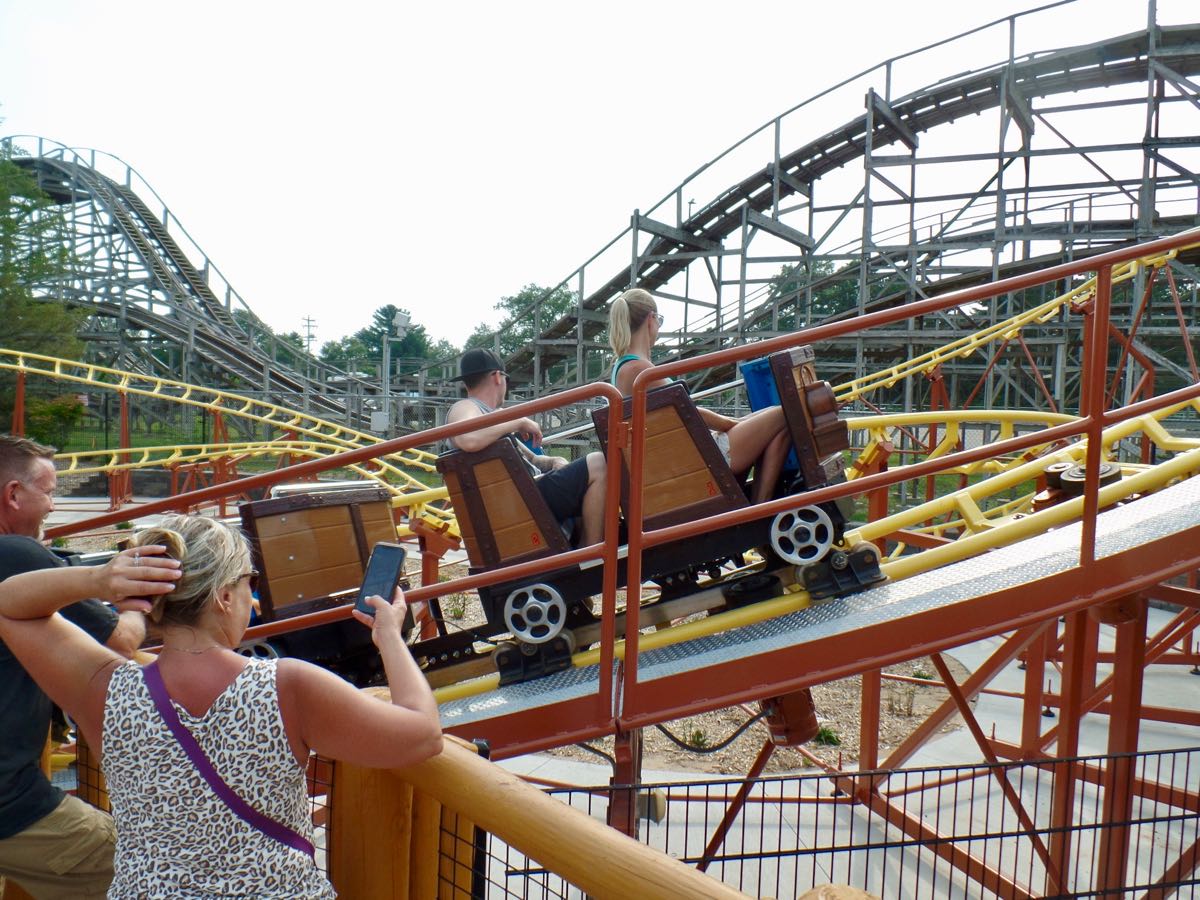 Kids riding on the Woodstock Express. The trains are styled differently to how they were as Big Dipper, although I don't know if that's replacement trains or they just bolted ``paneling'' onto the sides of what was there. 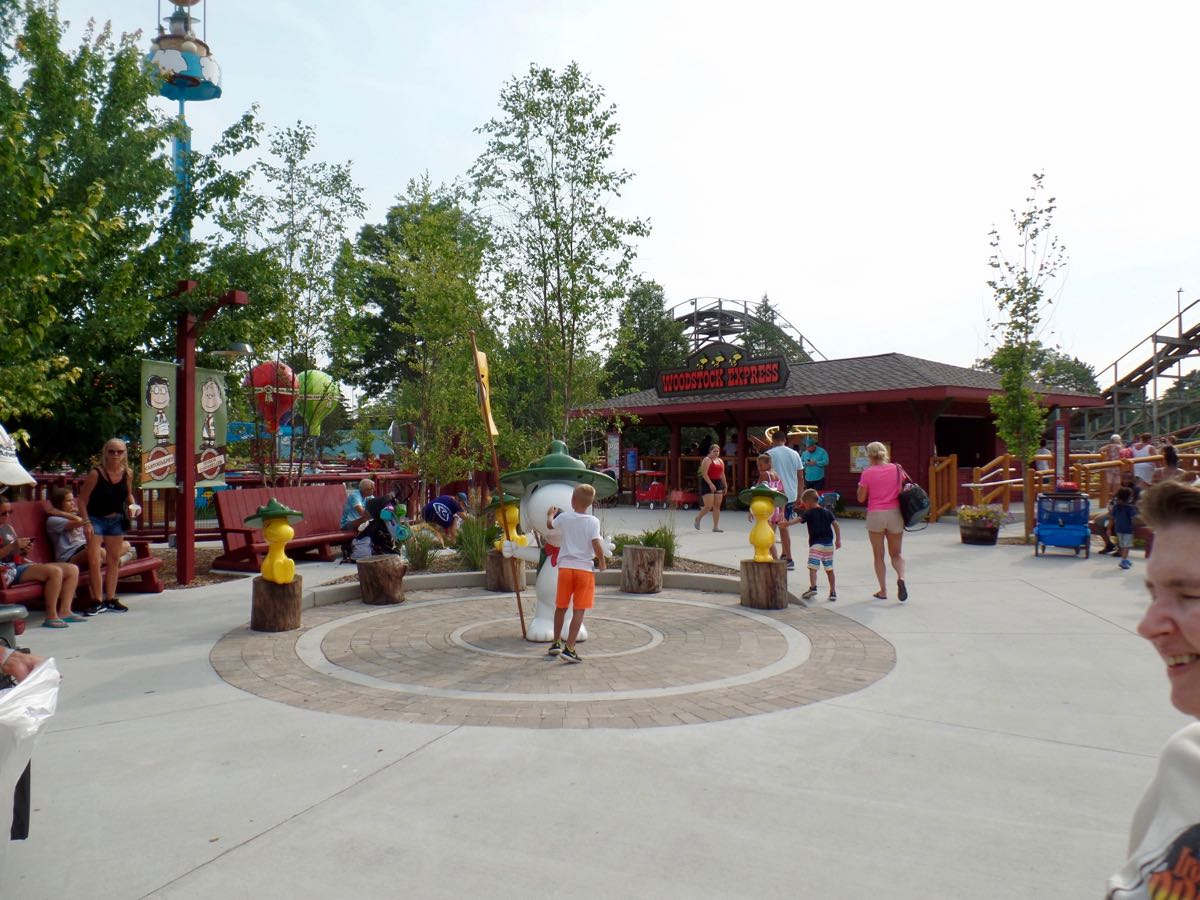 Kid beeping the nose of the Snoopy statue that's on the other end of Camp Snoopy from where we entered. There's three Beatle Scouts plus 'tree stumps' for two kids to join the gang. 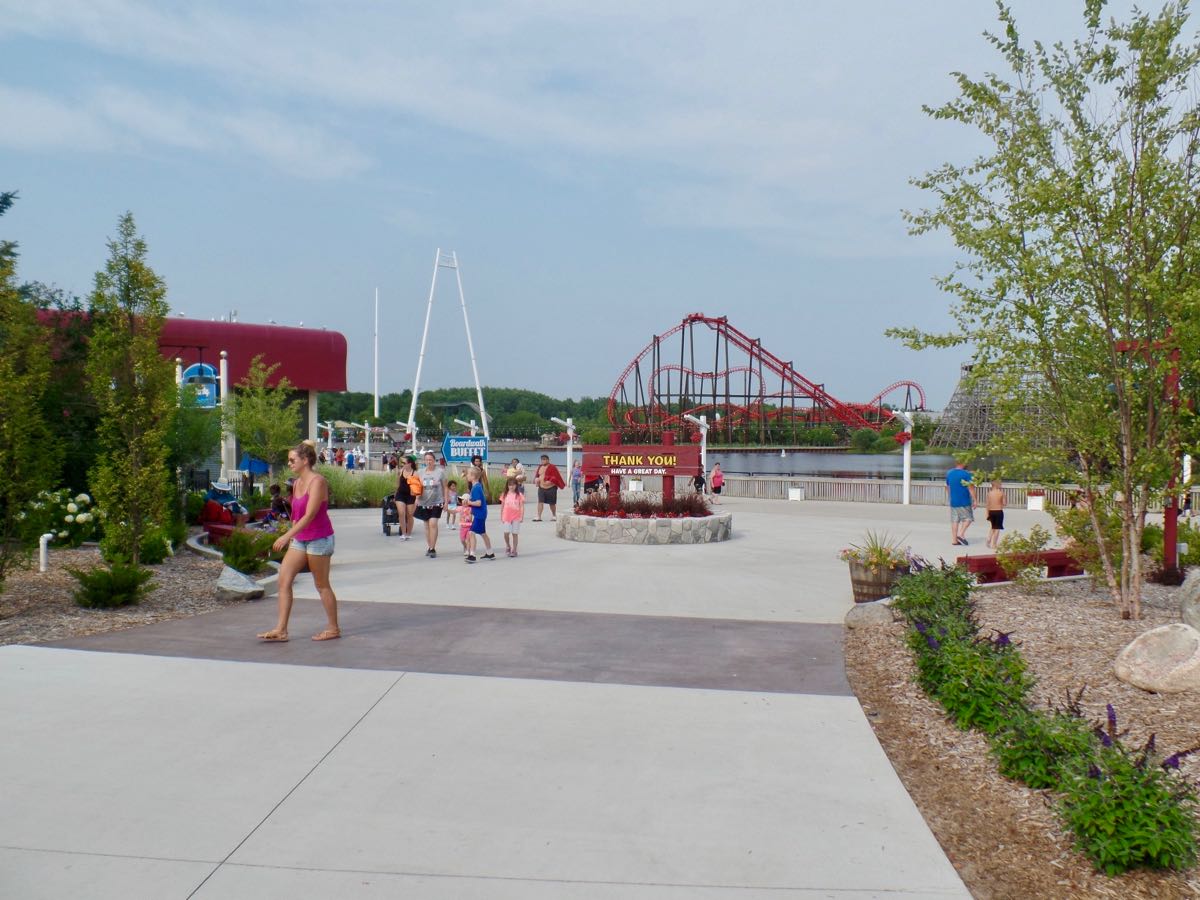 Looking out from Camp Snoopy over at Thunderhawk, which is looking snappy in its new colors. 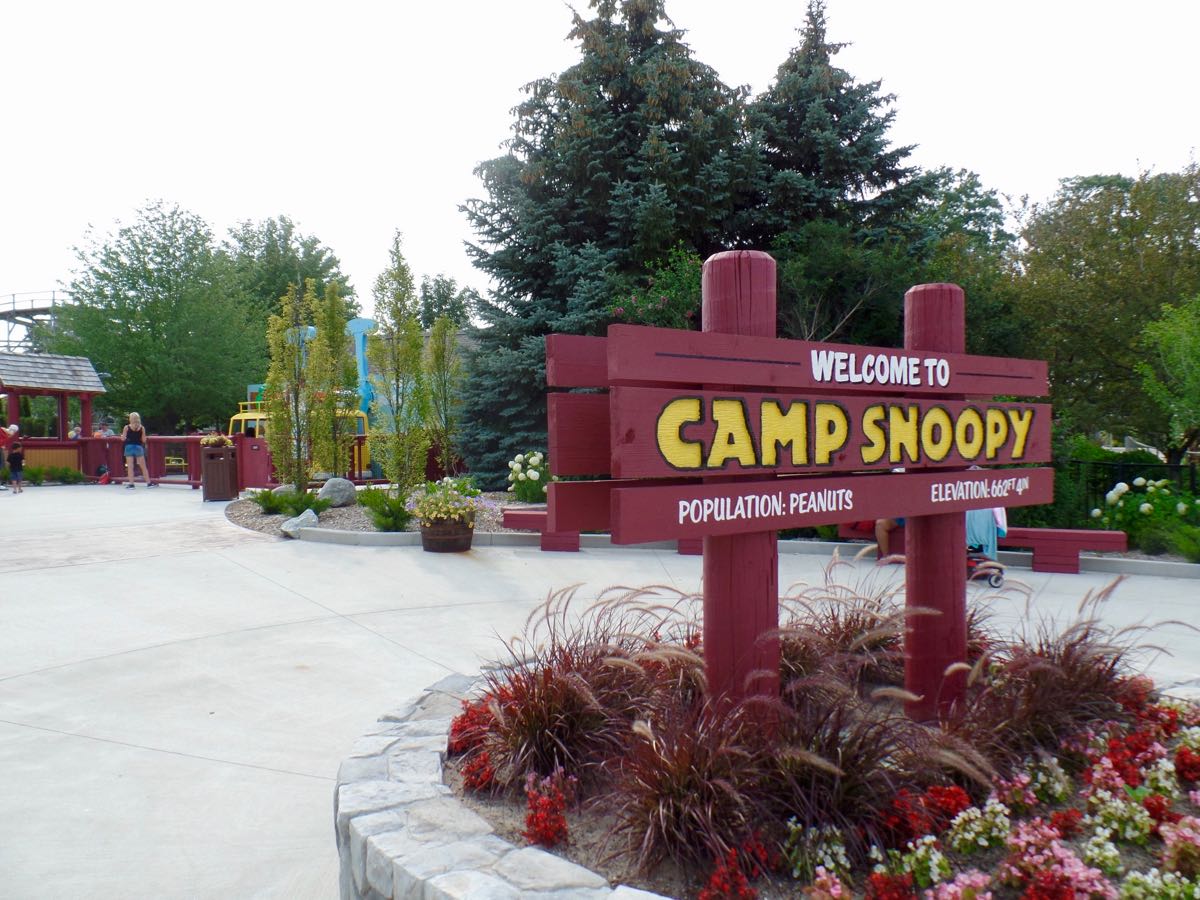 The other Welcome to Camp Snoopy sign. I don't like this trend where we call Charlie Brown and friends ``Peanuts''. It's a small different from ``the Peanuts gang'' or ``the Peanuts characters'' but, I mean, you know? The elevation of 662 feet 4 inches seems over-precise, considering the camp itself has more than a four-inch rise and fall. But it seems consistent with the elevations of towns in the area. Nearby Muskegon is given an elevation of 617 feet according to Wikipedia, for example. I assume that's above mean sea level. 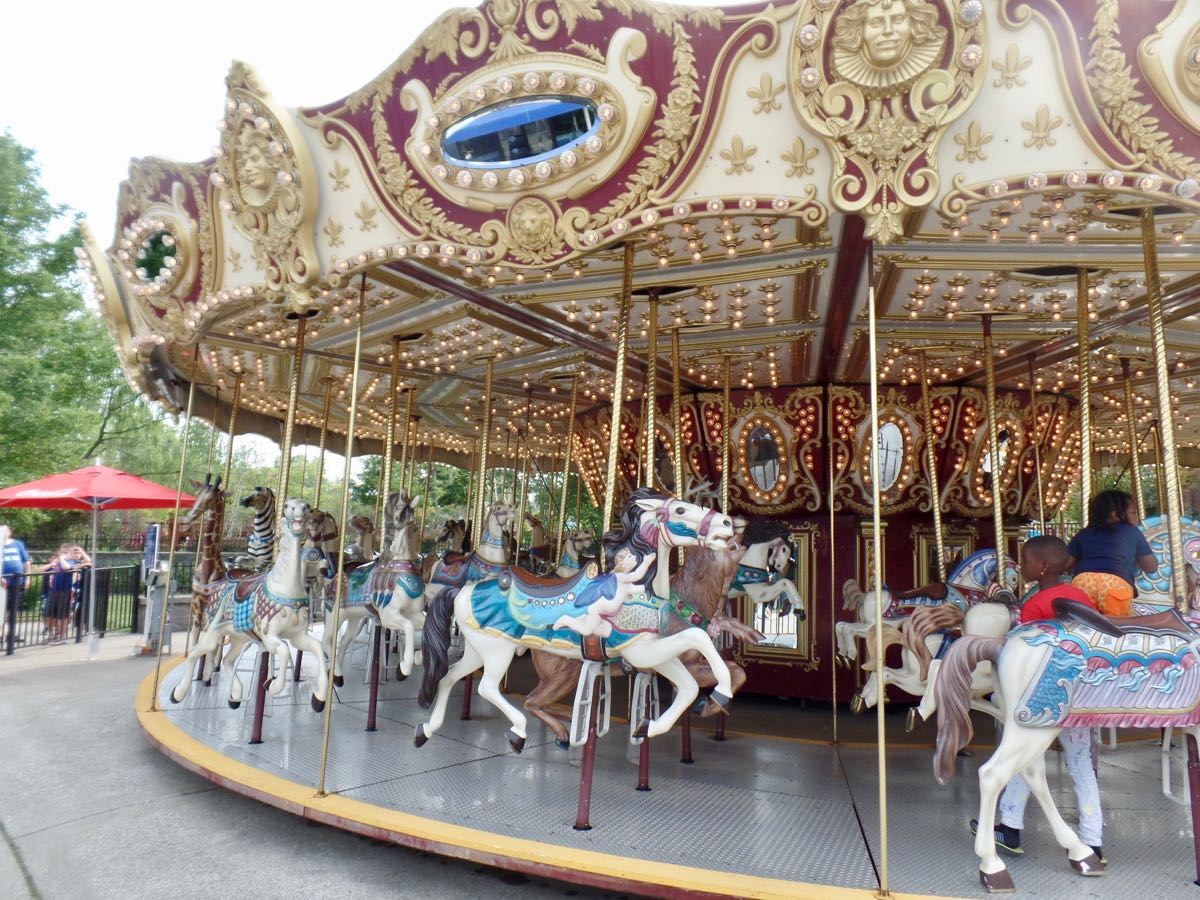 And here's the Grand Carousel! It's a Chance fiberglass carousel, one extremely common from the 80s, and it doesn't have a prime place along the midway but then Michigan's Adventure doesn't really have an organized midway. It is now near the exit of Camp Snoopy --- adjacent without being in it --- which does seem like good placement at least. 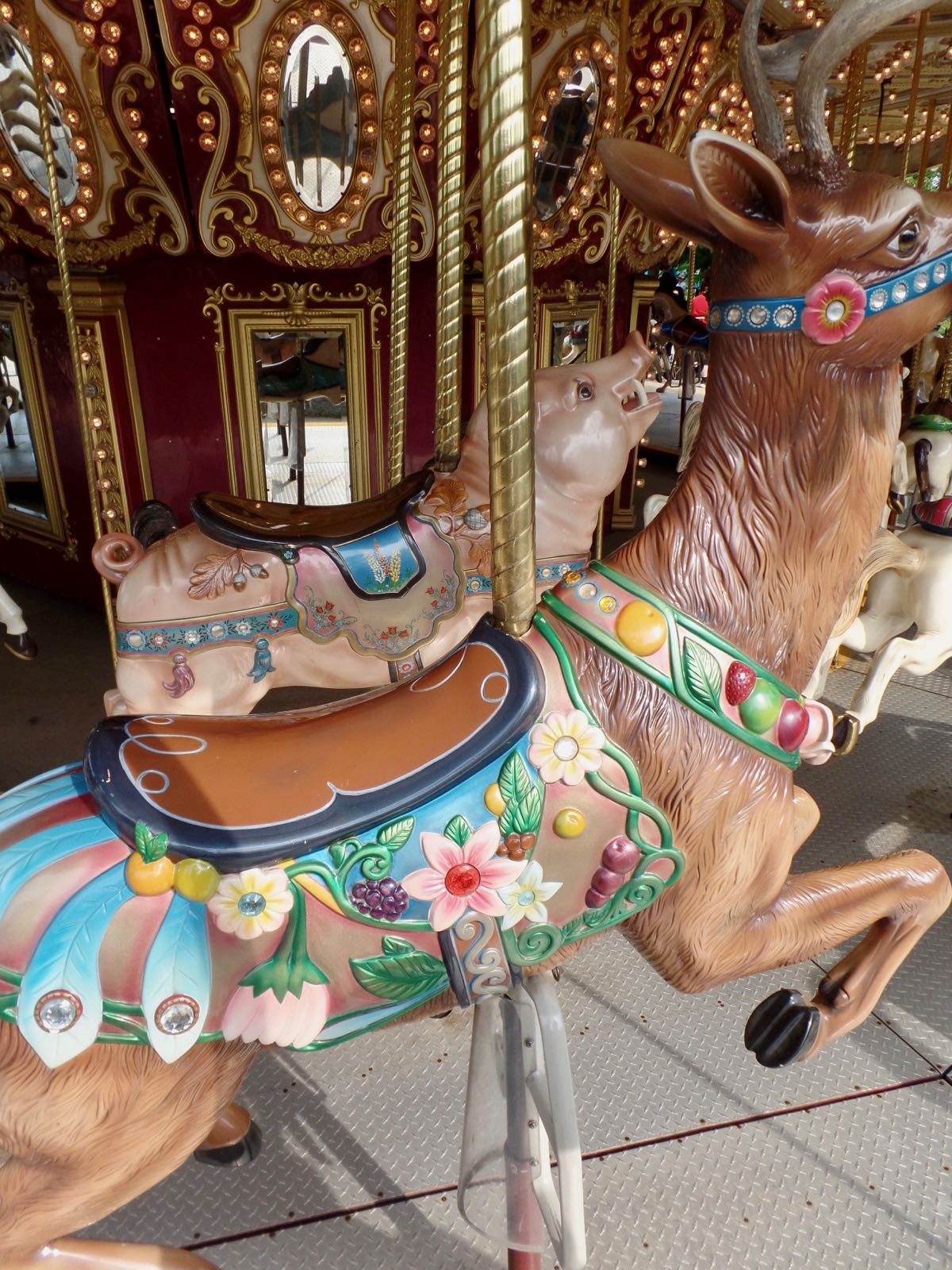 The animals we rode.

bunny_hugger's pig, we were told, was named ``Apple'' --- there's apples on their blanket and saddle --- while my deer was ``Jewel'', for all the jewels in their decor. And it has them, yes, although not particularly more than any other animal has (compare to the pig's). Possibly the ride operator was making stuff up, in which case we don't mind. Years ago a ride operator told us the antlers on the deer were from a real animal from the 50s. While it's true real antlers were often put on antlered carousel animals (they've surprisingly lightweight and durable), it'd be weird for a set to have been called into service after thirty years for a fiberglass horse.

Trivia: Jamesburg, New Jersey, is named for James Buckelew, 1801 - 1869, a farmer and mill owner who went on to open brick and draining-tile factories, a bank, and the Jamesburg Agricultural Fair. As a provider of mule teams for the Delaware and Raritan Canal Company he became one of the United States's largest dealers in mules. Source: Railroads of New Jersey: Fragments of the Past in the Garden State Landscape, Lorett Treese.