So the worst news to come around here in a week: Wednesday night I finally thought to check my cell phone to see if the mechanic left a message for me there, instead of the land line. He had, to call him. Thursday morning: he was wondering when the insurance was going to send an inspector around; they hadn't heard anything. Also, sorry to say, they're probably going to declare my car a total loss. Almost everything that got hit in the flooding has been, and as he pointed out, they don't want to get stuck for fixing a years-long string of things that turn out to be flood damage.

Practical matters first. I called AAA to say there hadn't been an inspector (assessor, whatever) around. They said that was curious and would have someone there this morning. Since it was already 11 am I didn't take that literally, but I haven't heard anything by the close of business Friday, so I suppose Monday will see a fresh round of asking people if the thing that seems inevitable has happened yet or what.

But then also: my poor car! Lost! Struck down at twelve years and a couple months by a moment's thoughtlessness!

I hate to lose my car. For all my occasional little thought of replacing it, I'd figured to hold on until it started needing major repairs regularly. If I had to guess that'd be another fifty thousand miles --- let's say five years, in normal times --- away. And that's putting to the side thoughts of not wanting to have to pay money just to get back to the state of having a car.

And an extra agitation along the way: I told my father about this. And I understand, and appreciate, that this is an expression of his love, and the best he can do to help a situation when he's a thousand miles away and the actual solution is going to involve many thousands of dollars. But he wanted me to know that, you know, usually this sort of thing you just have to find a mechanic who does good electrical work. He actually evoked the name of the mechanic he insisted I take everything to, in central Jersey, although actually a guy he knew in Woodbridge, although he conceded I wouldn't actually be taking my dead car from Lansing all the way to Woodbridge, New Jersey. Still, he was very insistent about how even if the insurance totals the car I can just buy its corpse with the settlement and then hey, if there's someone who does electrical systems (in Lansing? Ya think?) I can get it running again. And he spent a while explaining how spark plugs and distributors work while I tried to chew my shoulder off.

I have been emotionally preparing for the official declaration, and I suppose I'm glad to have a half-week of knowing the news before I have to accept the news. I am going to have to think of a reason to give my Dad for why I will not be taking my car to whatever guy with a four-star Yelp rating he finds in metro Lansing. Fortunately I can play on my lingering fatigue as reasons for why I haven't gone over to take photos of the underside or try turning the engine over for him.

At least its last drive could have been to a good place. It'd stink if my car died so I could return a broken dehumidifier to Best Buy.

Also I do not relish the thought of buying a new car. On the other paw, there's an advantage in not having to dither over the question of ``keep repairing my old or buy a new''. And it's become more common to have no-haggle car-buying, relieving a great source of anxiety for me; one thing that took me to the Scion back in 2009 was that it was a flat price and that's that.

What am I looking for in a new car? Not necessarily literal newness. I liked having this car from odometer mile 8, but I've done that now and don't need to photograph the odometer rolling over to 1,000 or 1701 or 6502 or other meaningful numbers anymore. I am looking for an electric, or at least hybrid. I have to figure my Scion's the last purely gas-powered car I'll get.

So what was that weird noise I heard off-panel for yesterday's pictures? What could it have been? At the train tracks? 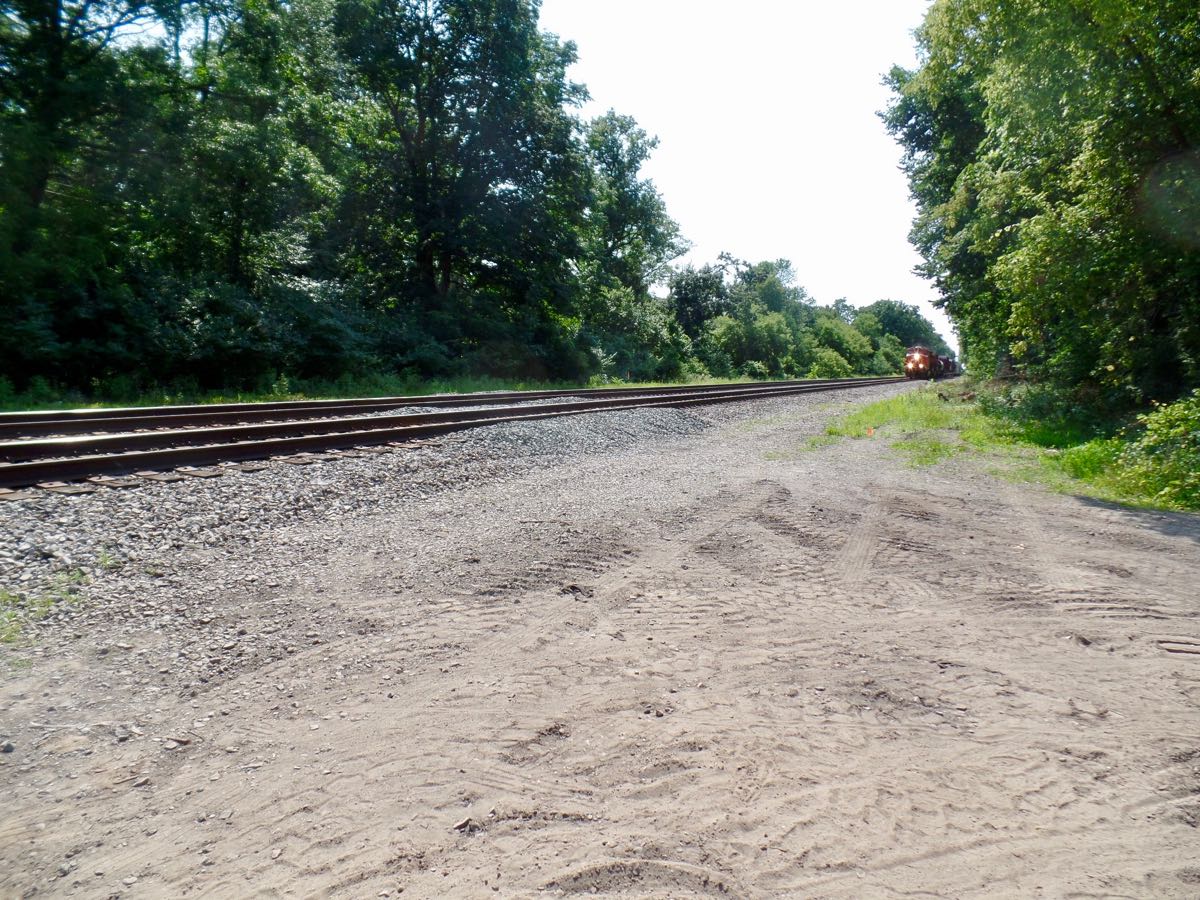 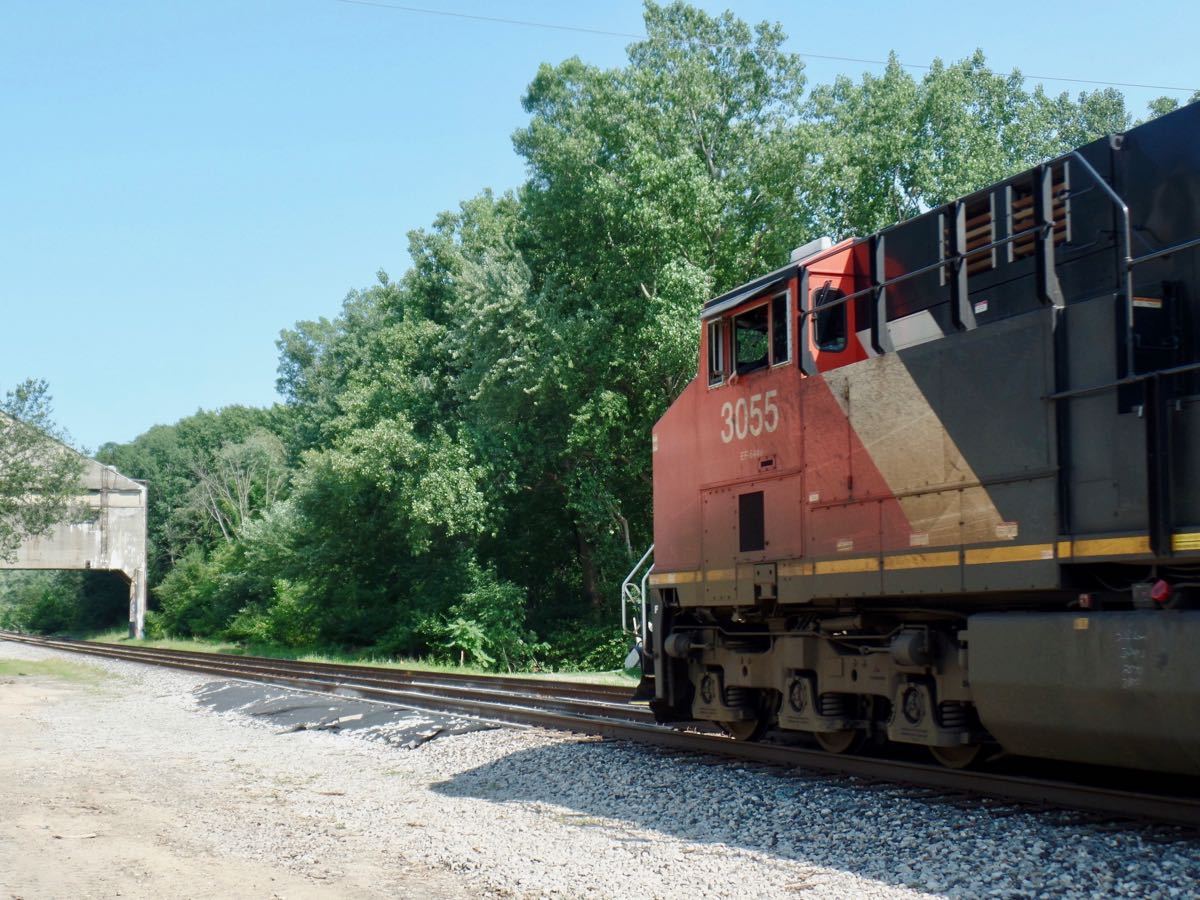 And there's the lead. Have to suppose the engineer's seen a lot of people taking pictures like this. 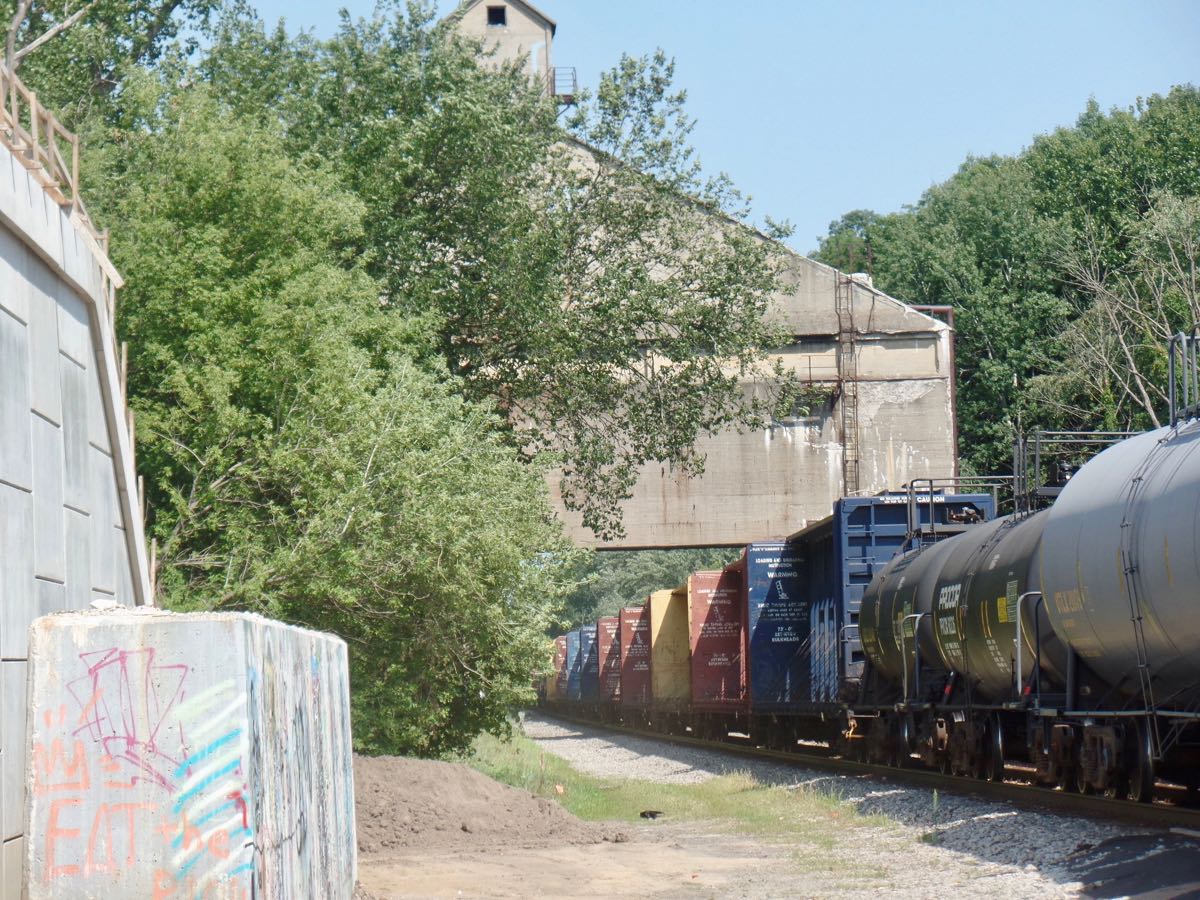 Here's a particularly nice lineup of what look like empty parts trees going underneath the coal tower.