You hear the thunder of stampeding rhinos

Almost had life returning to my mathematics blog when everything smashed me up. Well, here's the last couple postings over there.

Well, let's see how the train finished out. 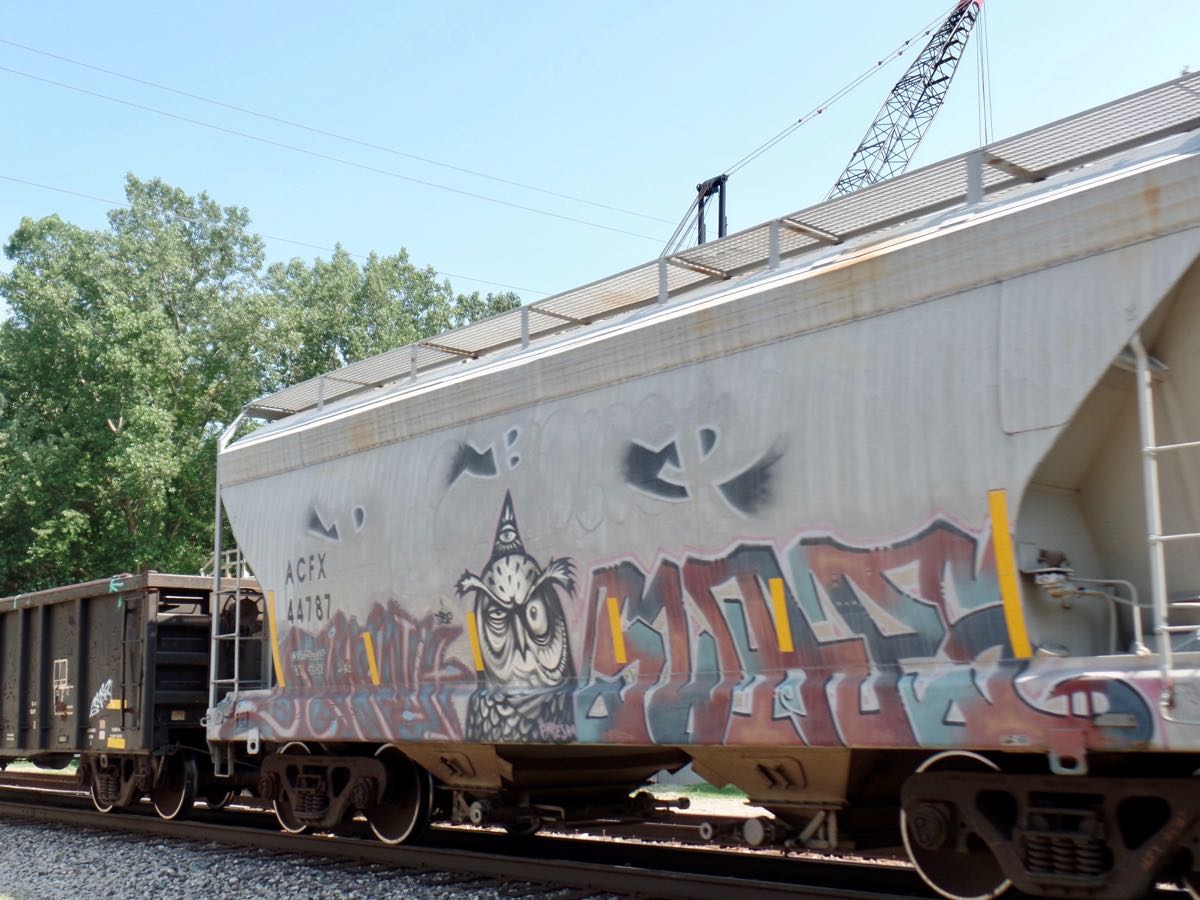 Graffiti Illuminati Owl has had enough of your nonsense. 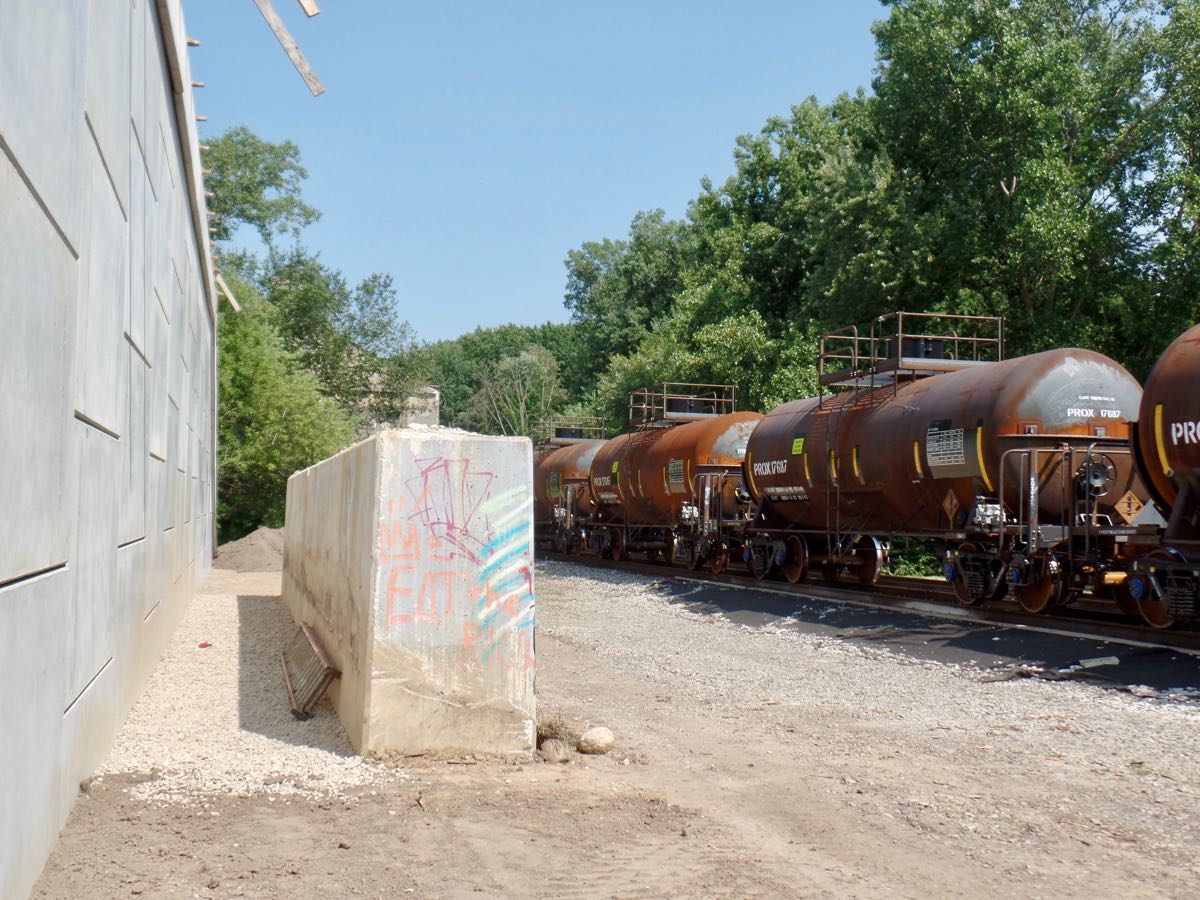 Another stretch of the train with nothing but ... I don't know, I guess in Transport Tycoon they're all liquid tankers. The 'PROX' label is maybe significant. 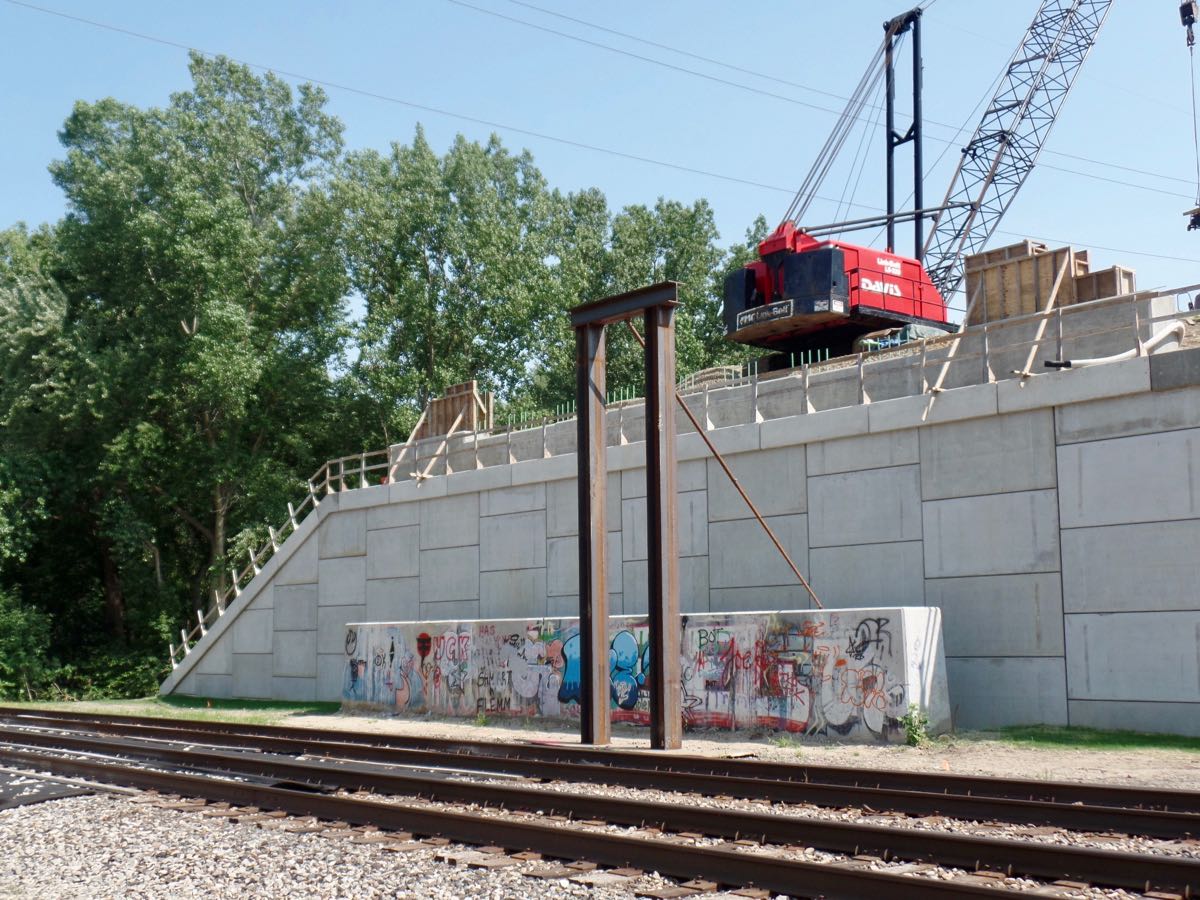 Train's passed, back to looking at the bridge construction. The I-bar tower that a couple months ago was way above the roadbed length has been cut down to size. 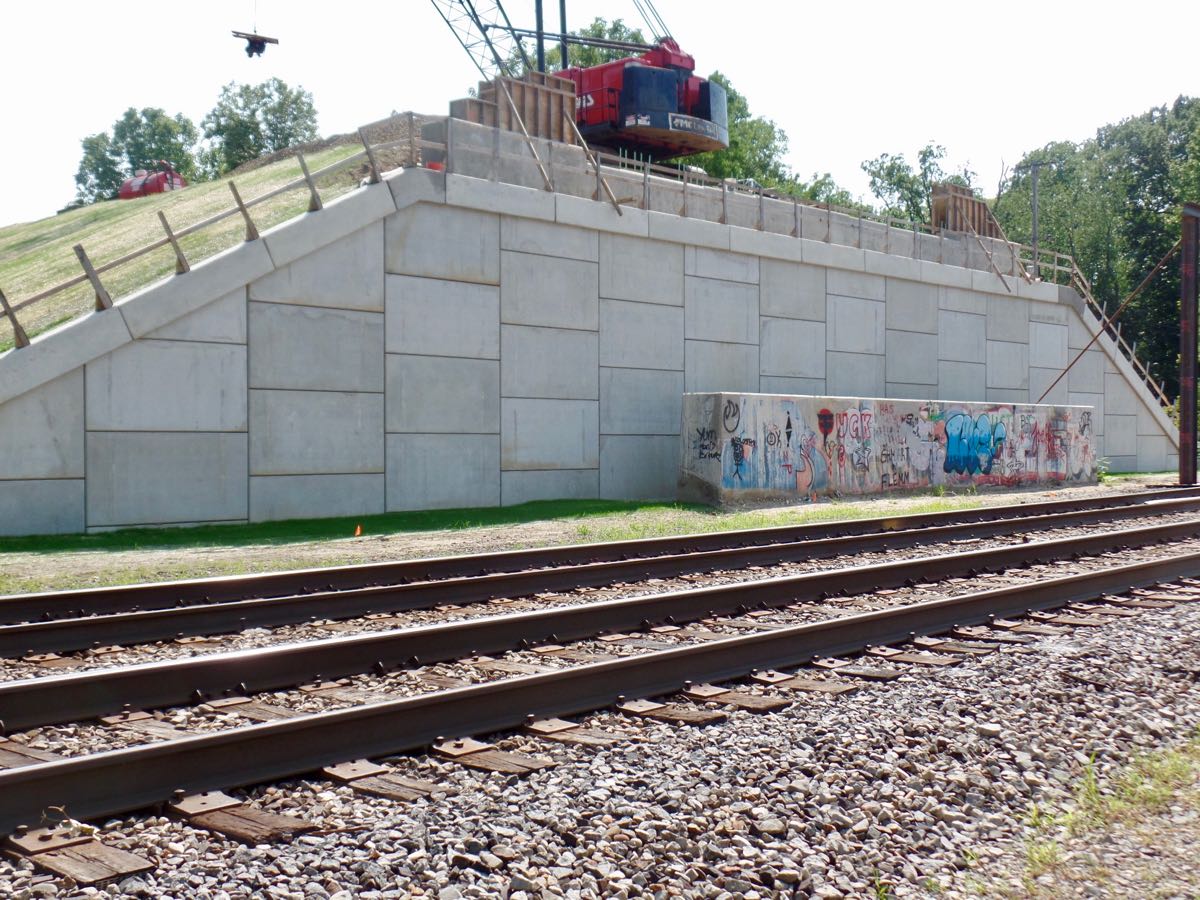 From the eastern side of the bridge's location, looking at the south end of Aurelius. It already looks as though they seeded the ... berm? ... with grass, which seems nice but shouldn't they have finished the bridge part first? It all left me quite tempted to scrabble my way up that side and get to, like, the Potter Park Zoo for the first time since March. 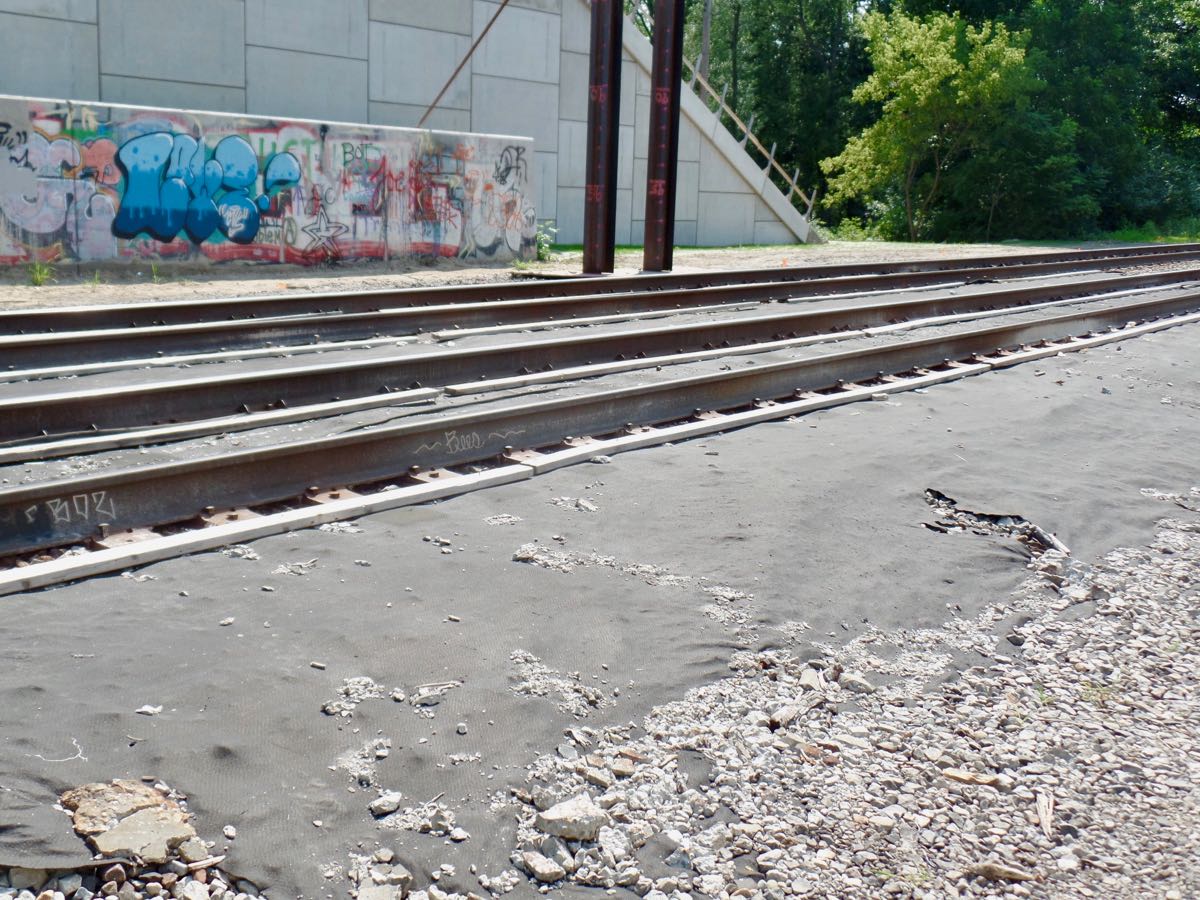 The trackbed underneath the work site has what looks like some kind of canvas-y thing on it, with some rocks on top further. I don't know the purpose of this. Like, I get the rough purpose of the gravel beds, it distributes ... weights ... so stuff doesn't get ... a bad thing. And I can figure on that stuff needing other care during construction, but I don't get what this offers. I guess the weight loads of construction equipment are harsher than those of the train? 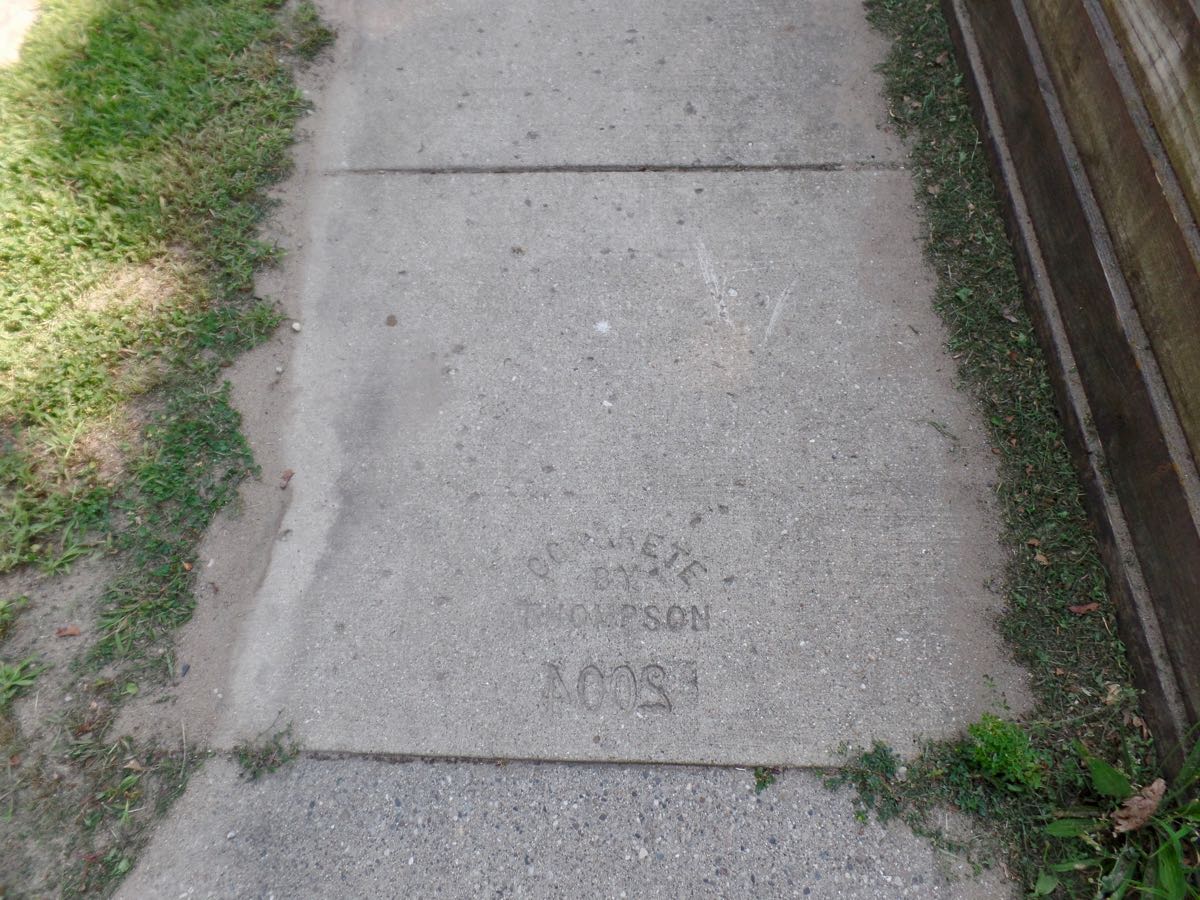 Another, different, Concrete By Thompson stamp where the date is backwards. I don't know why Thompson has such trouble with its date. This one's at ... uh ... I want to say Dakin Street, which is south of I-496, in the part of our neighborhood severed from us by a different railroad but also by the highway.

Trivia: In June 1943, Joachim von Ribbentrop and Vyacheslav Molotov met in Kirovograd (now Kropyvnytskyi, Ukraine), then within German lines, discussing terms for a possible peace on the eastern front. According to German officers there as technical advisers, Ribbentrop proposed Russia's frontier be along the Dneiper River (in Ukraine), while Molotov would not accept anything but the Soviet Union's borders from the 1939 partition of Poland. Source: History of the Second World War, Basil H Liddell Hart. I'd never noticed this before and I hope Liddell Hart didn't get something completely wrong because it's a fascinating prospect. If it has any basis in reality I'm sure it must have been discussed in the soc.history.what-if archives, surely under the Alien Space Bat category because I can't imagine anyone negotiating a German-Soviet peace in 1943 thought they were negotiating anything but ``let's pause two years and restock''. And I get Germany wanting that; that's the happiest-for-them way 1943 could ever go. (It's probably the only avenue by which they could have won the war, at least for divergences after the Atlantic Charter, possibly after Dunkirk.) But what possible terms could the Soviets get that would be worth it? Remember the second round would be fought without any conceivable help from the Western Allies, unless maybe the Counter-Revolution came and named the head of United Fruit as the Restored Tsar. This has to have been Molotov trying to head-fake the Germans into fighting less hard for a month, right?

Currently Reading: Lost Popeye, Volume 9: Popeye in Davy Jones and The Sea Goon, Tom Sims and Bela Zaboly, Editor Stephanie Noelle. OK, so, the ending depends on the Bad Guy's Muscle getting out of control for not really obvious reasons, but it all swings along very nicely, and it concludes with Davy Jones (villain of the piece) having to concede the arbitrariness of his villainy. Plus, a startling Popeye relation turns up. Yeah, this is a heck of a story even if the Sea Goon turns out not to be that much and gets forgotten too soon.