And it ain't me who's gonna leave

A moment of non-local pinball news. Marvin's League was going to have a special night, one with three launch parties for the Stern-manufactured pinball games that have arrived in the world since March 2020. That's off, though, postponed a month, as the league runner just wasn't feeling any good about running a big gathering of people in an enclosed and dubiously ventilated space like Marvin's in the circumstances. And I sincerely and without reservation thank him for it. I asked

bunny_hugger to pass on my support as I'm sure he hears more whining than anything else. Unfortunately Marvin's, in a Detroit suburb, is in a county with a much higher daily infection rate, and transmission rate. With luck a month will let those numbers get down to something less terrifying, something like ... well, Lansing's ... but I fear it's not going to be enough.

Also cancelled: AJH's Pinball At The Zoo Consolation Tournament. Which I didn't know existed until it was cancelled. But with Pinball At The Zoo no longer scheduled for Labor Day Weekend he had figured to fill in with something in Fremont, and then that evaporated, again citing the current circumstances.

bunny_hugger and I didn't accidentally prompt the cancellation. AJH hosted a tournament in Fremont back this past Saturday, the first one since the 28th of February, 2020 --- the hidden anniversary of me and

bunny_hugger --- but we didn't attend. In my case, because I was feeling too weak to play six or more hours of pinball, after a two-hour ride both ways. In

bunny_hugger's case also added to that is we'd have to drive out there and back in her car, which has no reliable air conditioning, and it was beastly hot. (I did tell her she should feel free to go, but between Covid-19 and the lack of aircon she wasn't enthusiastic.)

Which is all innocent enough, but I realize today it's the first Fremont tournament that we've missed in years. Surely since the last time the tournament conflicted with a roller coaster (or, for me, work) trip. And unusually, we didn't explain our absence. It has happened, although long ago when his monthly tournaments were one-quarter their current size, that he'd reschedule a tournament when we were unable to make it. I hope he didn't misinterpret our unwillingness to come to this one as a declaration that nothing should happen until the pandemic recedes.

(Whether Fremont tournament should happen is complicated, of course. The county Fremont's in has a surprisingly low infection count, for the poor vaccination numbers. But almost everyone for the tournament is coming from outside, many of them from Grand Rapids, which has a good vaccination and also rather high infection rate. As I write this, Fremont and Lansing are the safest pinball spots, but if people came from all over the state to play, that wouldn't matter. The Fremont venue --- a former car dealership --- is a capacious space with doors that could easily be opened to the outside, although I don't know that AJH would want to given what it would demand of the air conditioning. I suppose come September that will likely be less of a concern. Also come September I hope to have a replacement car.) 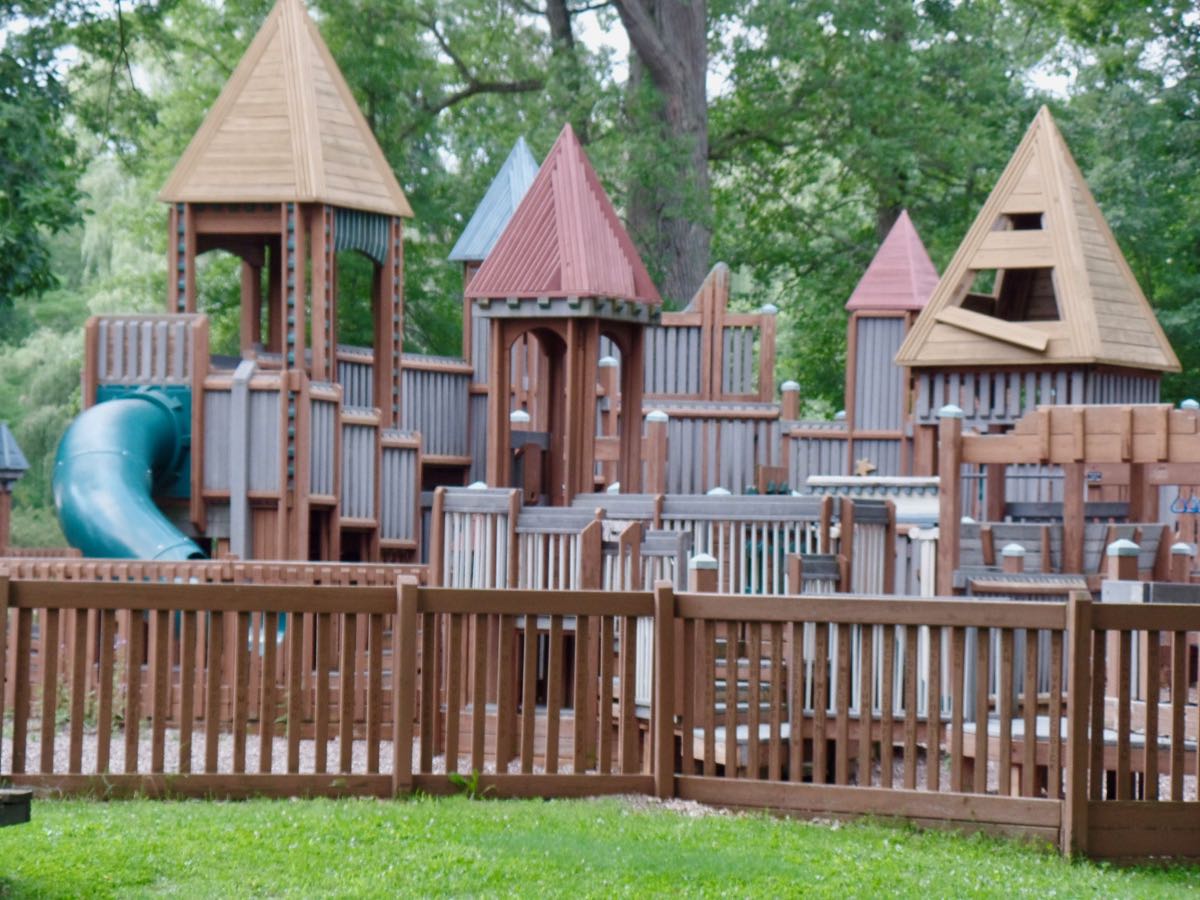 Kids play set stuff at the park. It looks like plenty of spaces to get into where your parents will find it too much trouble to pursue when it's time to go home, so this is probably pretty popular among the kids. 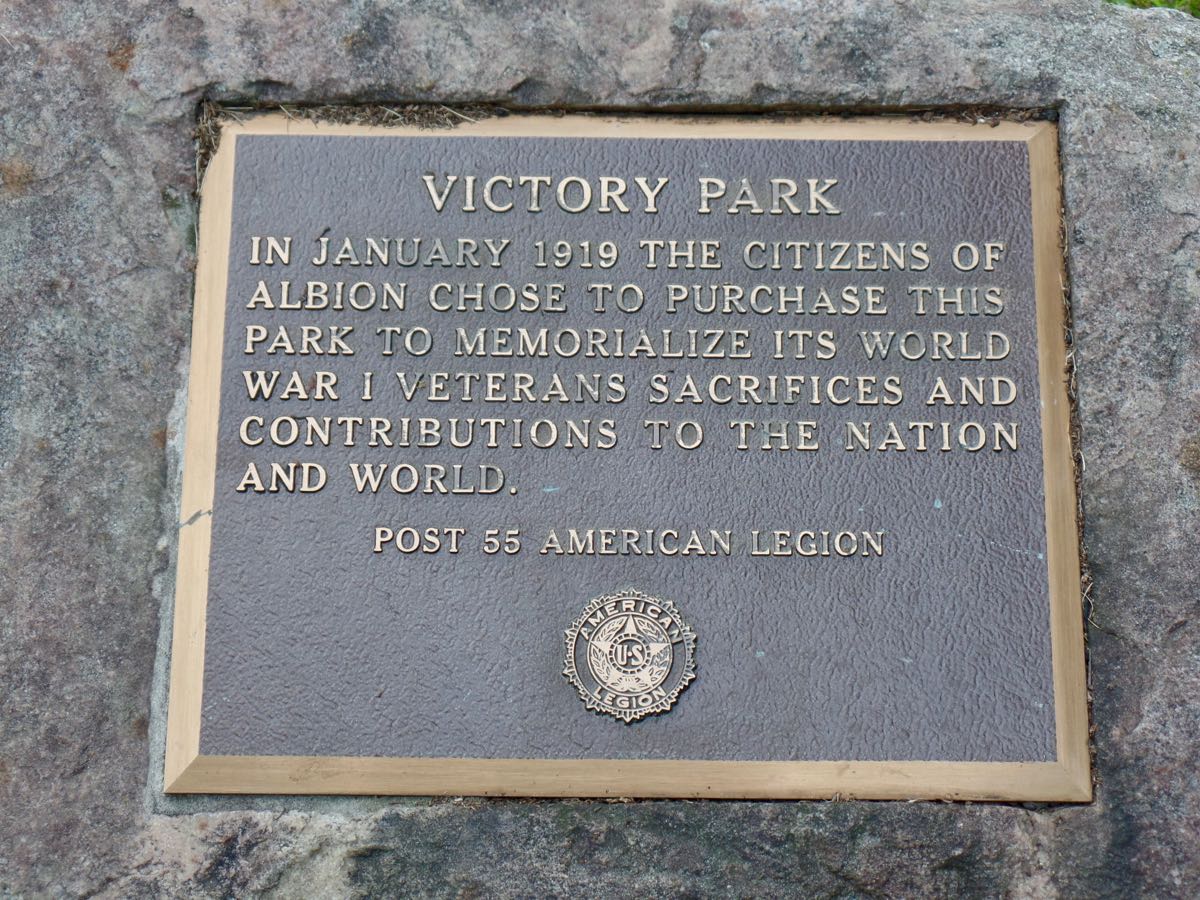 Sign explaining Victory Park to people who didn't come in from the side where it's called Rieger Park. 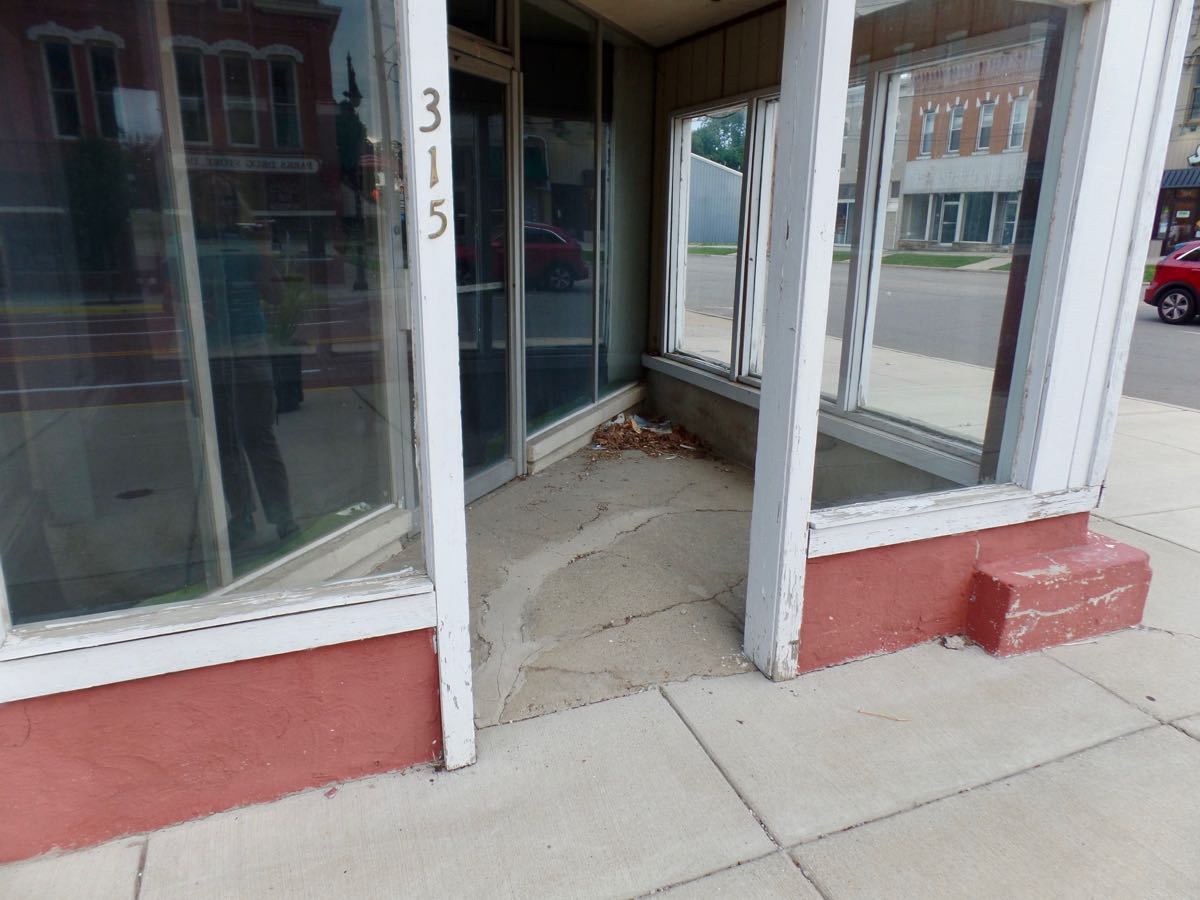 Just an empty store corner entrance in downtown Albion that caught my fancy because, well, it's nice-looking and all. Probably very nice in the winter to have a place to duck in that isn't wind-tossed and snowed on, although in the winter they probably board it up so it can't do anybody any good either.

Trivia: Though Rutgers had been the land-grand college for New Jersey since the 1860s, and by 1917 legislation the ``State Agricultural College'' was the State University of New Jersey, Rutgers did not have an actual college of agriculture. It had a department, and programs in mechanical arts, and several other departments, notably ceramics, specifically created by the state legislature. In 1921 the school reorganized to have an actual specific College of Agriculture. Source: Rutgers: A Bicentennial History, Richard P McCormick.