Especially if you and me

Tuesday I accepted the total-loss offer on my car. It was inevitable and still I wanted to postpone it because, jeez, my poor car. But there wasn't any rational way around that. I'd need to get to the dealer and clean it out, and told the guy with AAA that I didn't have the time to do it Tuesday. I'd be able to get it Wednesday or Thursday, so, let's schedule the wreckers to tow it away Friday. He agreed. Thursday was a bluff;

bunny_hugger had meetings at school all day, but I figured I'd have time Wednesday and could use Thursday just in case I realized something went wrong.

So, Wednesday, during the hottest, most cloudless part of the day, we drove to the dealer to clean my car out and my service advisor told me they'd already towed it. It was gone, off to wherever they take the car.

Back home, then, with me returning to the anger I felt over Sunshine's cancelled appointment. I called the guy I thought we had made the schedule with and he was startled. The company usually takes like three days to tow a car. But, they have a couple impound lots and one is in Lansing and he said he'd call to find out where my car was and whether I could clean it out after all.

bunny_hugger's trunk. So I called them back again saying, you know, yes, I had thought by ``tow away Friday'' they meant Friday on the Gregorian calendar. A joke that even as I said it bothered me, because it's not like the days of the week are different on the Julian calendar. Well, they had the car, and promised that if we got there in like a half-hour it'd be available for cleaning-out. So I put the plastic bin back in the trunk and we set out again, to a spot on the west side we barely knew existed.

bunny_hugger tried to console me by talking about the sadness of seeing the car at the knacker's, and while it was well-meant I wasn't in the mood. I went in to say who I was and what I was looking for and they said the car was in the front lot, and I thanked them and walked out onto the gravel pit in my open sandals, the one kind of footwear they have signs warning you not to use. For a car that had been towed away just hours before there were a lot of vehicles around it. Also ones in much worse shape which I guess is consoling? Like, if my car died at least it didn't involve hurting anybody.

And there inside was everything basically as I'd left it, although steamier, with a bit of mold growing because it had got very wet and was left with windows closed to steam for two weeks. The electrical system worked enough I could turn the lights on and take a snap of the final odometer reading --- exactly 142,500 miles --- but it wouldn't turn over, of course, and it wouldn't offer any air conditioning.

So, on to cleaning out. Some of it was stuff I'd obviously need again, like my jumper cables or the first-aid kit (smelling a bit ripe, admittedly), or the USB charge ports that fit into the cigarette lighter port. Some are of dubious value to me or anyone, like the cable that converts the Scion's custom USB port to 30-pin USB, perfect for plugging in a 2008-era iPod. Some were pure sentiment, like the last complimentary-coffee cup I got from Horrock's before the pandemic shut down complimentary coffee service; I mean to keep that until the coffee returns. (Tea, in my case, but still.) Don't know what I'll do with the bundle of aged road maps that I don't think I ever opened, but I don't want to shed them lightly either. Decided in the end to take my car's owner's manual, which comes in this lovely canvas case with a zipper and everything. Trophies, let's call them.

We walked around taking pictures, of course, the mirror to my first day with the car when I photographed it from every angle. The pictures won't be any good; it was blazingly hot and bright and a faded black car just won't turn up as anything, but it's the best I could do for it.

When I bought the car, new, there was this little warning tag on the front floor mats and I never bothered ripping it off. This was finally the day to rip it off.

Although it can't even in theory matter I cleaned the car up as best I could. Set the rear sets up, put the little removable cover on the trunk space. Gathered the absolute trash --- things like the cups from our last Speedway trip --- into two plastic bags, bundled up neatly. The car may have no future left except perhaps as parts, but I could at least give it the dignity of looking presentable. As we emptied it out a guy came around to put the windshield sticker with its final ... number, and cause of death, on.

Took my key off the keyring. I don't have much on it, just a small flashlight that doesn't work and the rubber key dongle from the dealership where I bought the car in 2009. But still, I'd rather have that than not. Took the licence plate off my care, and brought the box of stuff back to

bunny_hugger's car. She had gone off with a smaller box of things, too, and somehow in walking between one lot and the other, in the sunlight, with nobody else around, we lost track of each other a while. Didn't re-meet until I had said my farewells to my car, left the keys (main, spare, and valet) inside the unlocked vehicle (which felt weird but what was someone going to steal?) and went into the office to say I was all done.

And that's Wednesday and the last time I'll see my poor dear Scion tC, number 470 of the 2000 in that year's special limited edition series.

One time when we were visiting Kings Island we went off to find something to eat, and there was another driver there with the 2009 limited-edition Scion tC. We recognized each other, and circled each other, delighted by the coincidence that this vanishingly rare car found its twin in a Skyline Chili outside the Paris of America. And I wonder what's come of that car, and if it's had a happier 2021 than mine.

So here's pictures from the Lansing Pinball League Zen tournament. 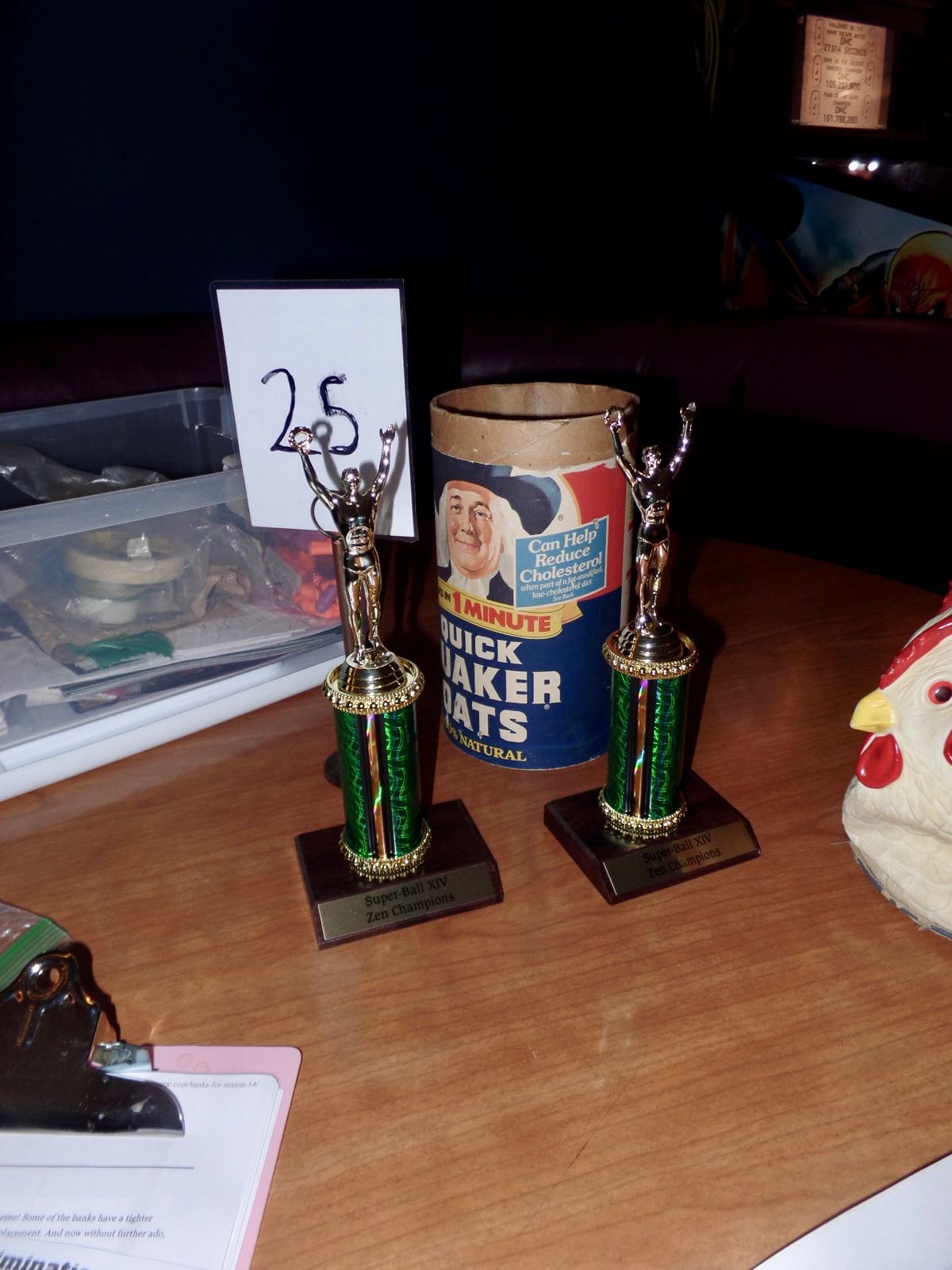 The goal: one of these lovely silly Zen Trophies, plastic brass figures holding wreaths. To the side,

bunny_hugger's Hen Bag. And inside the Quaker Oats bin: a whole bunch of karate medallions won by DMC, who donated them and their ribbons to earlier trophies but he'd like the medallions back and we keep failing to get them to him somehow. 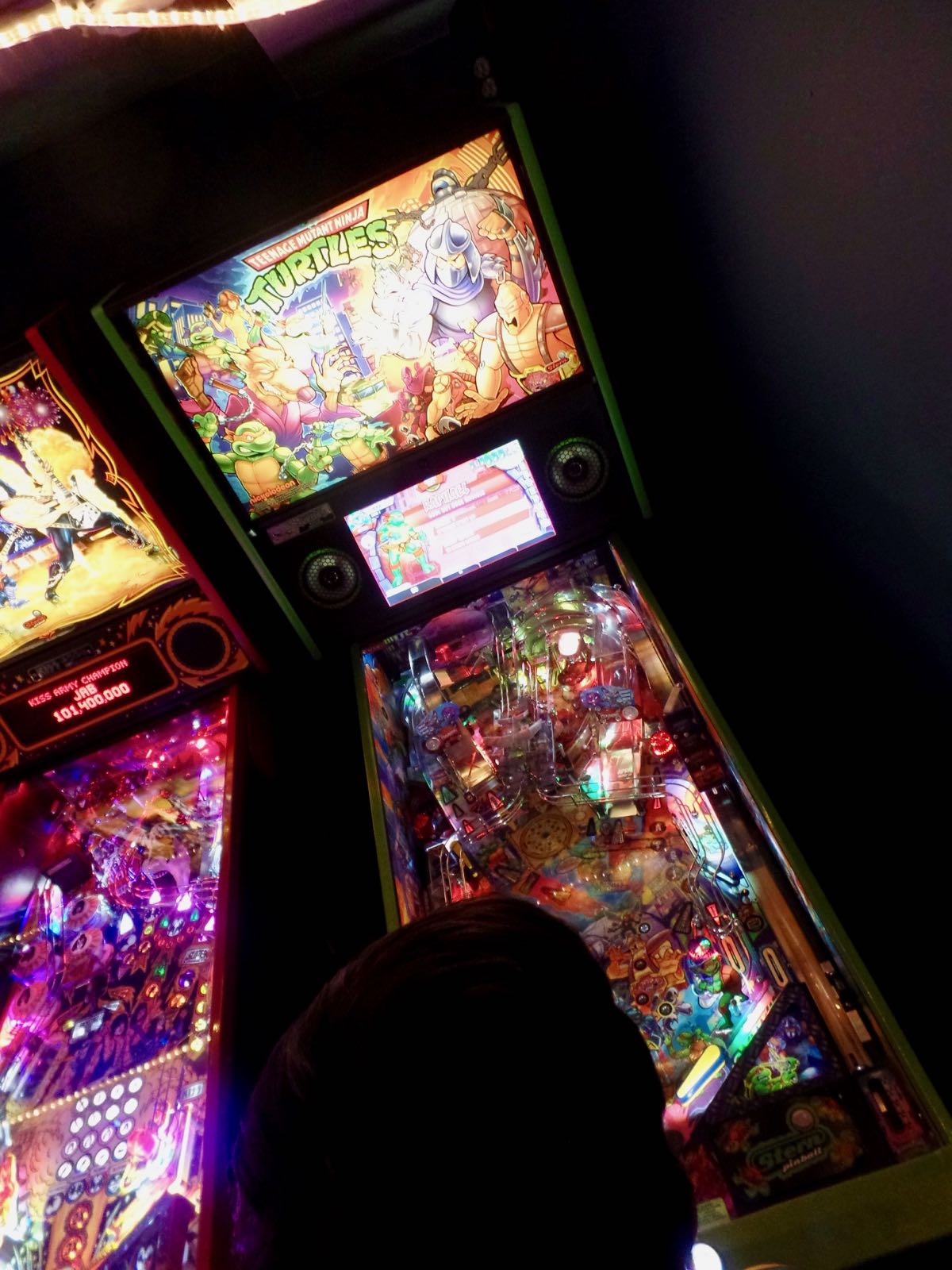 bunny_hugger on the Teenage Mutant Ninja Turtles game, one of the new Stern tables, having a ball she will not be happy with. She doesn't like this game. I ... did all right the first time I ever played it and all my hypotheses about how to play it since then have failed. 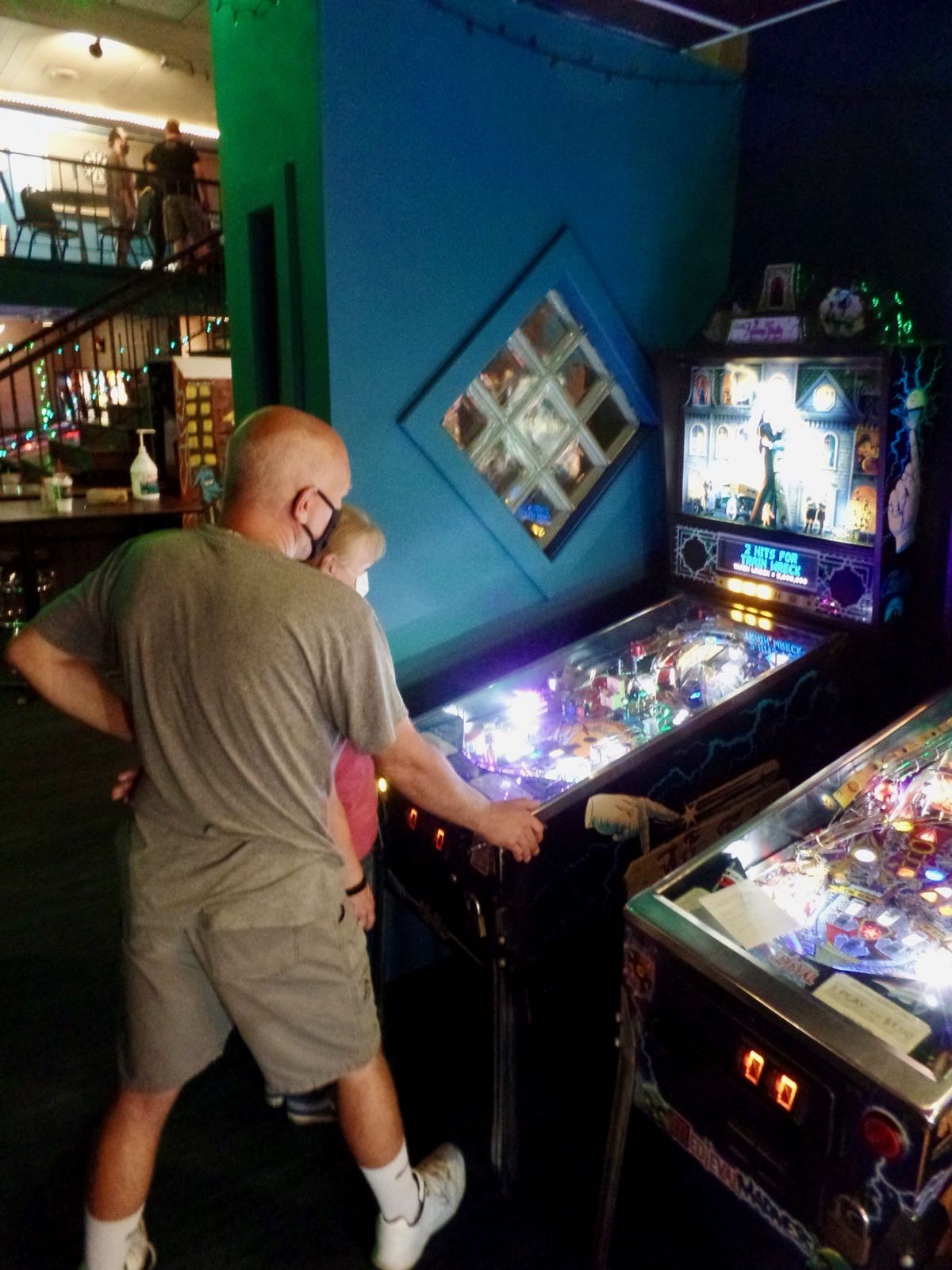 Zen pinball! A team playing on The Addams Family, one hand from each player. It's hard to figure where to stand so both players get a reasonably centered view of the table (the way everyone learns how to look at the games). So it helps if one player's a fair bit taller than the other; I can almost stand behind

bunny_hugger and have it all go well enough.

Trivia: By 1971 Indiana required freight trains to have at minimum five-person crews (engineer, conductor, and three brakemen); all the surrounding states allowed three-person crews. Source: The Men Who Loved Trains: The Story of Men Who Battled Greed to Save an Ailing Industry, Rush Loving Jr.