Is gonna be a good year

So now let me finally get to the thing we'd done Wednesday, the day that my car died. We had a couple motivations. One was wanting to do something joyful for us. One was wanting to see the Cedar Point Sesquicentennial Parade again, this time with a better idea of where we had to be in order to actually see where they stopped and performed. And one was to ride Wicked Twister. Cedar Point announced they're taking out the nearly 20-year-old coaster, a ride that's never gotten much love or attention. It was overshadowed in construction by Top Thrill Dragster, and the ride's off in a corner of the park that's always been sort of ... you know ... easy to overlook, even when they moved the Giant Wheel or the Tiki Twirl over there. The ride will be gone from early September, so we couldn't trust that we'd be there for some Halloweekend time. We'd have to go in August, and midweek midmonth seemed like our best bet. So it would be, for riding purposes ...

And, since I vamped long enough with post-Cedar-Point news, I can share this with the start of my photo reel. Enjoy! 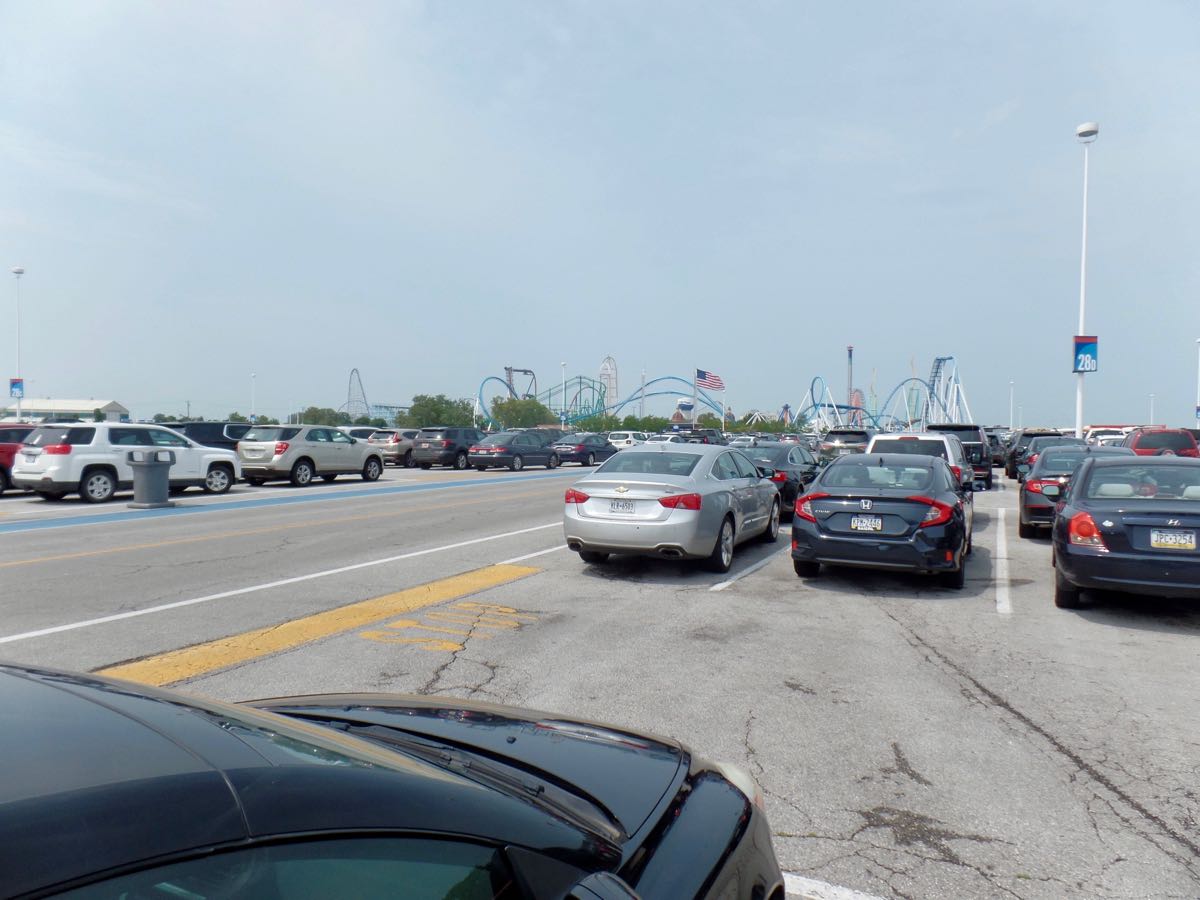 Our parking spot, a bit farther back than we'd like but still not too bad. Also incidentally the last photo of my car going somewhere on its own power, which is why I'm posting this otherwise unremarkable shot. In twelve and a half hours I would drive it into a flooded off-ramp. Wicked Twister is the faint yellow vertical lines you can't actually see just to the left of the rightmost roller coaster tower. 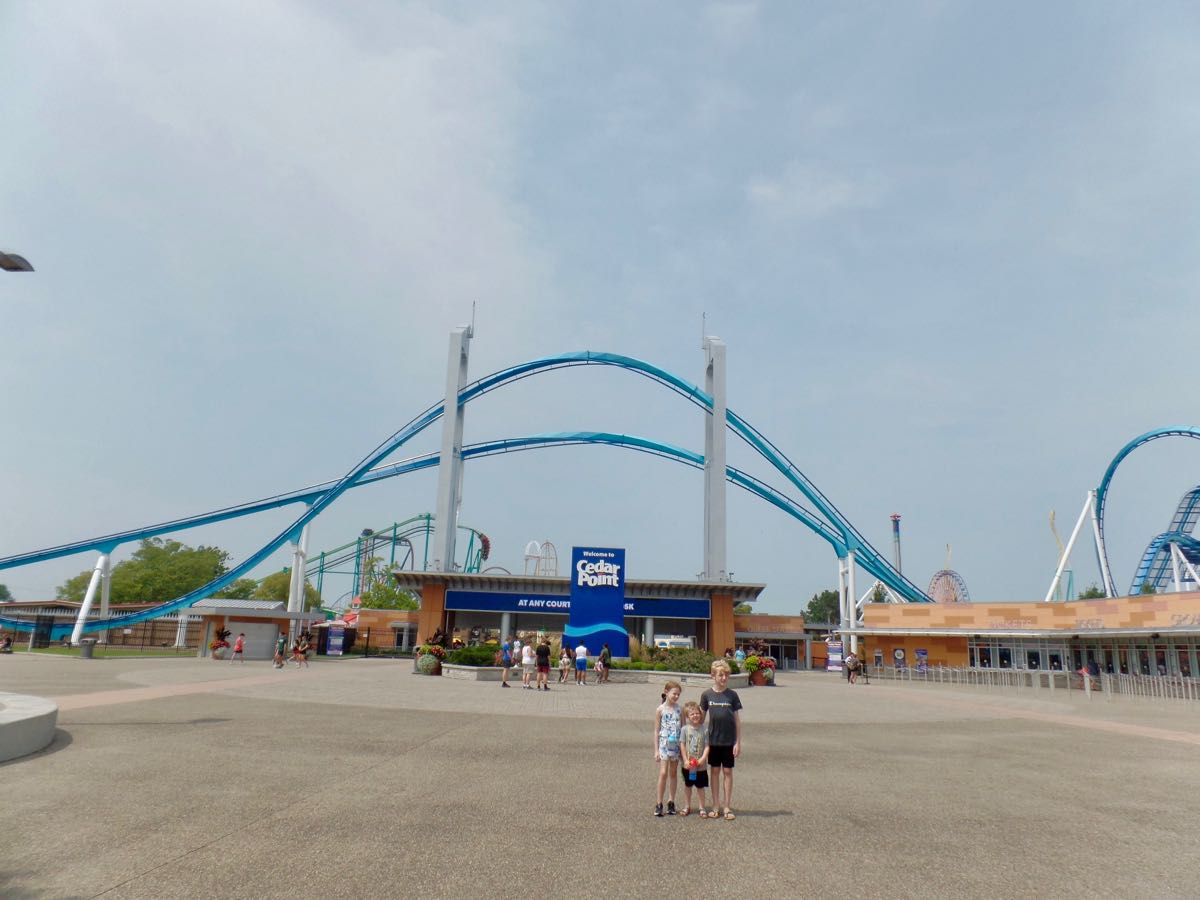 The entrance, with GateKeeper's graceful curves (you can again see a little bit of Wicked Twister) and me getting a picture of someone else's family. 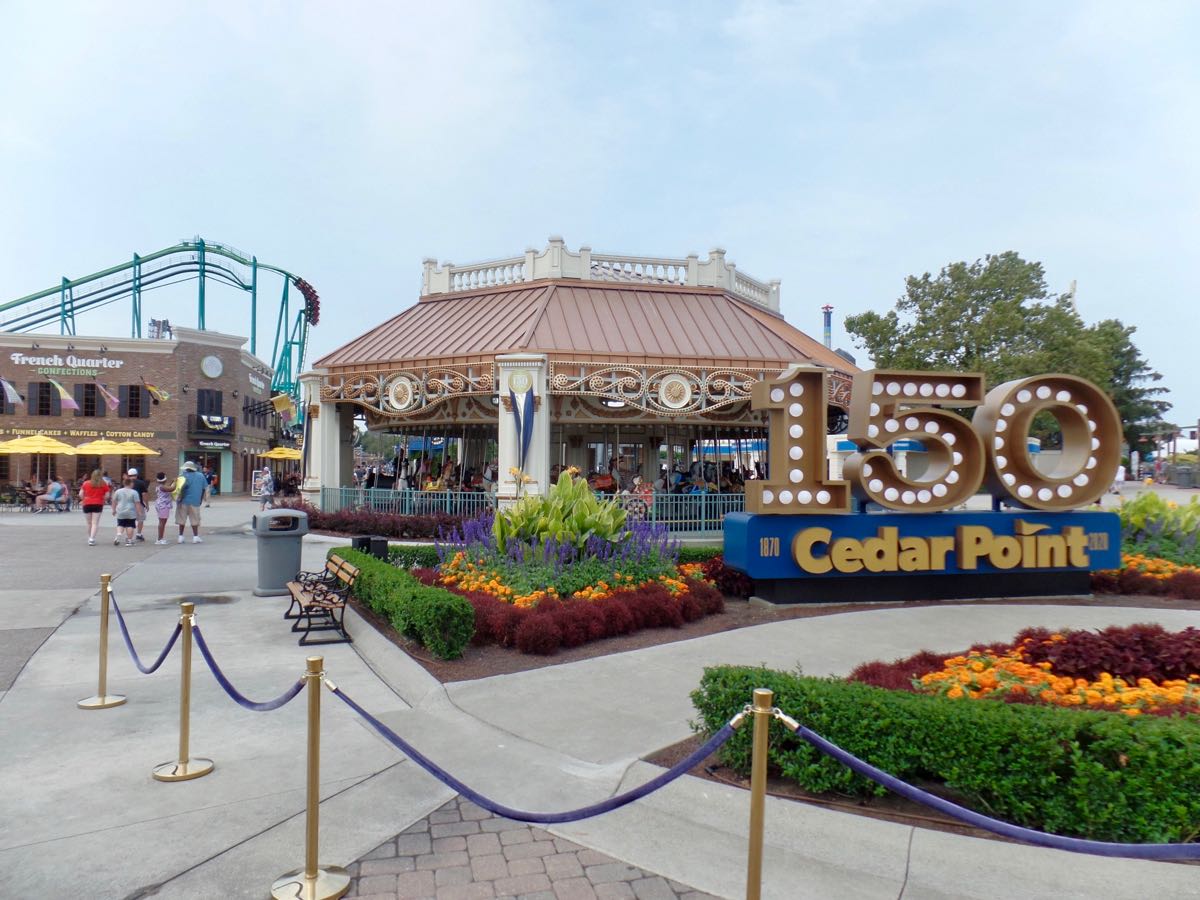 The 150-year sign in front of the Midway Carousel. Also, and a bonus event: we got to see something that would have been a surprise for our anniversary visit, if it had been working .. 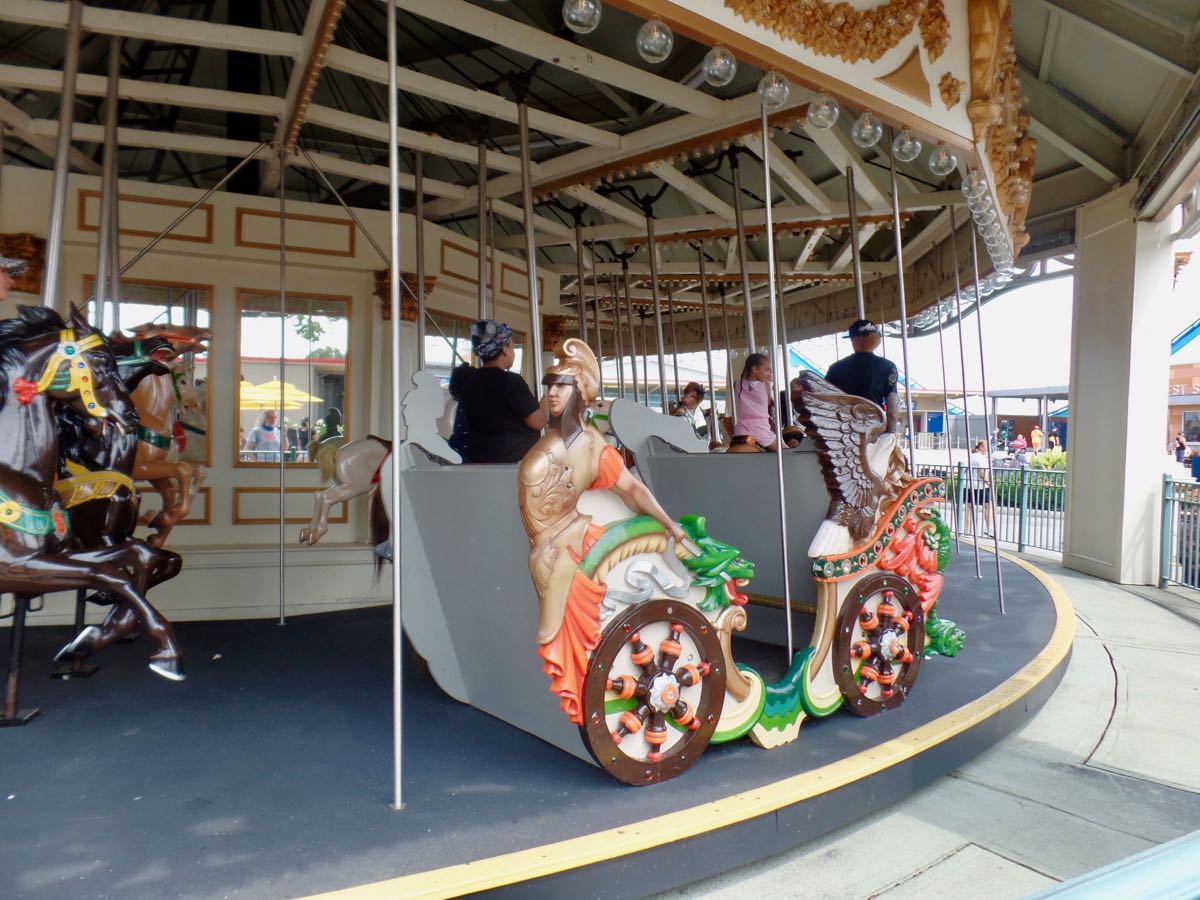 Chariot on the Midway Carousel. So we had wondered why with the 150th Anniversary and all Cedar Point hadn't repaired the band organ on any of their carousels. It turns out they had! The Midway Carousel is back and working. It just hadn't been operating back when we visited the end of June which is why they were playing the same old CD. Story goes that the band organ doesn't use scrolls, now, but got a control device that they can just upload MIDIs or something into. It's not so fun to not have the scrolls actually doing things, but, the band organ music is real instruments playing real songs that are not ``How's You Gonna Keep 'Em Down On The Farm''. What I hear from

bunny_hugger is the organ now has enough music it could go over a full day without repeating, which must do wonders at keeping the carousel operators from going stark raving mad. 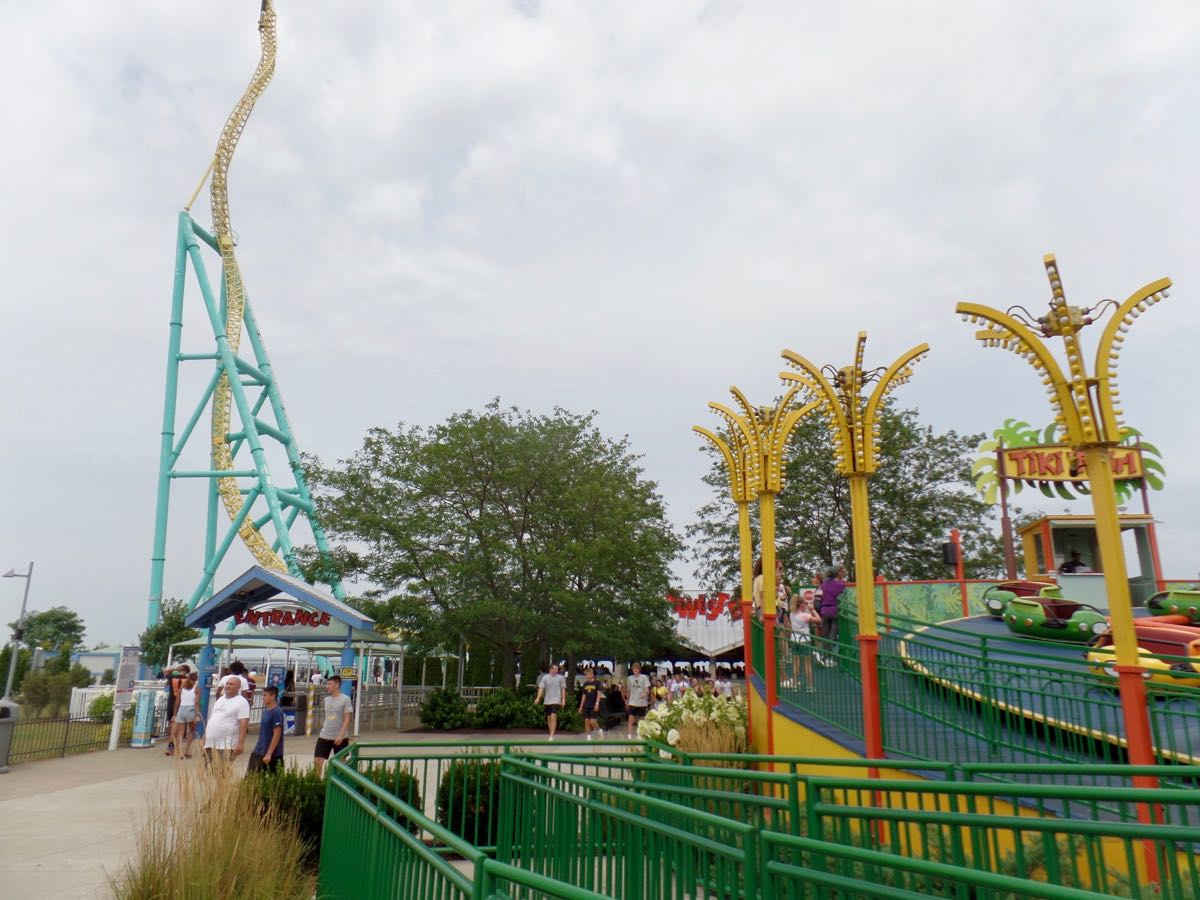 But there's no photographing music. So here's the entrance to Wicked Twister, which you can see is obscured even by the Tiki Twirl ride that should be drawing people to it. 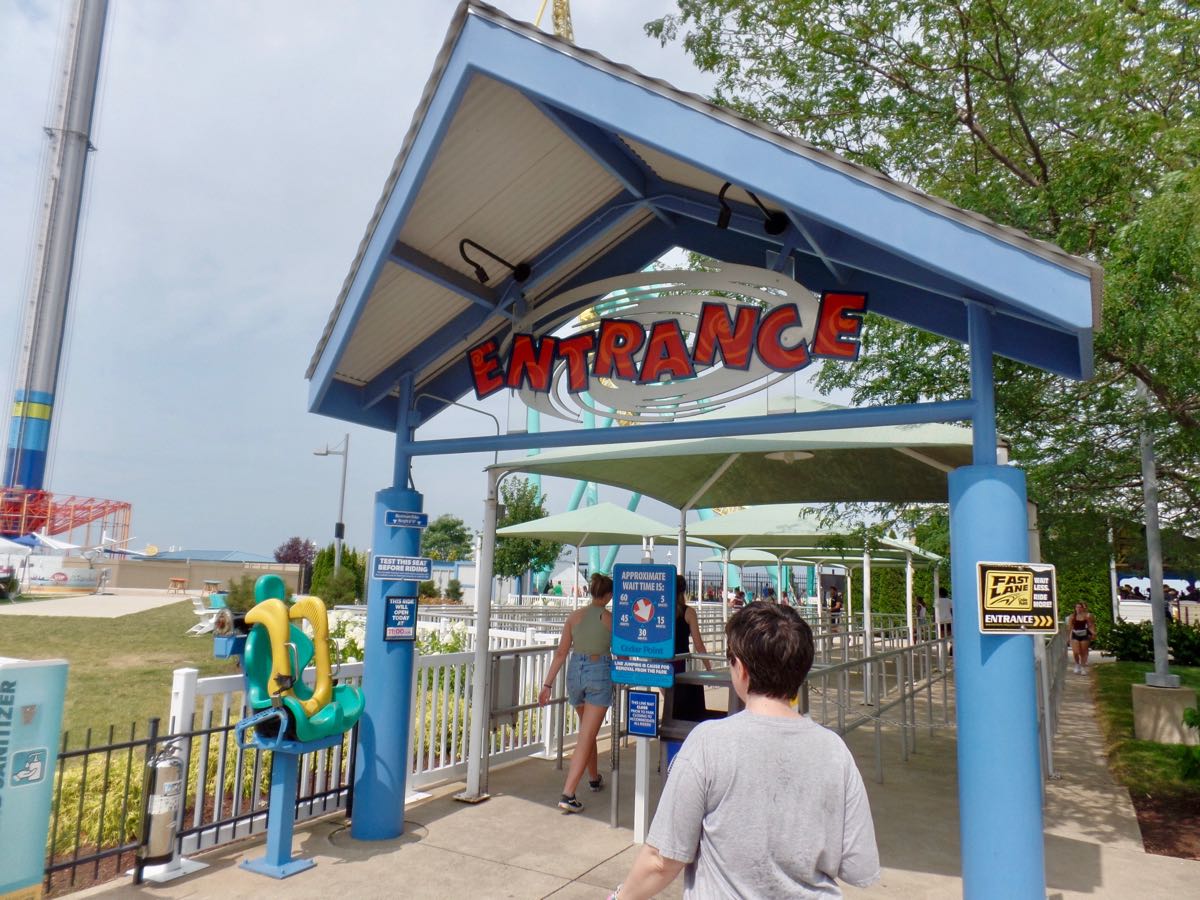 Entrance to the ride, which it's a shame to lose as it's one of the roller coasters that just never gets a ridiculously long line. And the vortex/swirling theme of the ride is a fun bit of style, too.

Trivia: One of the first publishing ventures set up in Venice, in 1476, was by Erhard Radholt. The major text was a narrative account of the military campaigns of the recently-deceased Doge Pietro Mocenigo, written by Coriolano Cipico, and celebrating Mocenigo's work in restoring the prestige of Venice since the disastrous 1470 defeat in Negroponte. Source: Worldly Goods: A New History of the Renaissance, Lisa Jardine.

Currently Reading: Journey Through Genius: The Great Theorems of Mathematics, William Dunham. Felt like rereading something of greater substance. I'm more alert than I used to be to the historical bits that Dunham clearly just copied off Carl Sagan, who wasn't actually that good a historian. He was just a white guy with a confident delivery so a generation of STEM types absorbed wrong ideas about the Library of Alexandria and stuff like that.

PS: How to Make Circles Into Circles on a Different Shape, pointing to someone else's blog-writing.