What about the boy

I bought a car.

It's a couple-years-old Prius, got from a dealer in Battle Creek that had a few hours open Saturday for Labor Day weekend. I don't get why dealers are closed weekends and most evenings. But they had the car listed and while I had reservations, it also hit a pretty sweet spot: hybrid, under 100,000 miles, an actual color, not too expensive. I could get there for their 10 am opening, if I got up early. I used our travel alarm clock, and when it went off at 8 am,

bunny_hugger apologized. She was doing the reflexive apology for leaving her alarm clock on, but it works if you suppose she was sorry I was getting up at 8 on a Saturday.

I would have things to apologize to her for. She was working an afternoon at the bookstore. The only way I could get the car back to her to make it would be if I got to Battle Creek, saw the Prius was on fire, and drove home immediately. She would have to get up early enough to take the bus, and I would --- hopefully --- get the car to her for the end of her shift. And that was needed because she had an appointment to get her nice after-market stereo taken out and replaced with the car's factory stereo, a step before she trades in her car for whatever her next car is. Ended up being a pretty packed Saturday.

At the Battle Creek Toyota dealer the guy I'd been e-mailing greeted me with a slightly wrong name, because someone of that name was, he said, scheduled to look at the other used Prius they had. And now that I knew of it I looked at it, too; it's several years newer but also seven thousand dollars more expensive and I didn't feel like that was quite enough for me. Also it's in that Boring Grey that every car is now. The guy took a cel phone photo of my license and gave me the keys and recommended paths to try out if I wanted to get the hang of neighborhood driving or highway driving. I went in the highway direction and ended up discovering several neat things. One was the sister store of the farmer's market we go to in Lansing all the time. We've known of it forever but never been out that way because we couldn't think of anything they'd have that was worth the hour-long drive. Another was the Post Cereals factory, which hammered home how this was Battle Creek, Michigan almost as much as the Tony the Tiger and Tony Junior the Tiger Junior statue at the Toyota dealership did.

So I had a bunch of thinking to do. Like: do I buy this car? Do I listen instead to the anxious e-mails of my father who wanted me to know he'd never buy a used car from a dealership (``they'll eat you alive'') and instead get something from a friend or a friend-of-a-friend who's selling a car. Or lease something with an option to buy.

Well, you saw the lede. I figured this was the best blend of price, features, and availability I was going to get. Also the car is a bright shiny red, looking like something, the first car I've had since I moved to Singapore that was a color. They took me around to the waiting area, where I could sit for seconds on a sofa or cushioned chair and then get up and pace around, getting in the way of employees who were off to do ... things.

After what seemed like forever a different guy came around to ask if I wanted a detailing warranty, that would repair the interior fabric or touch up the exterior paint if it were damaged. That didn't seem to make sense to me. Also he offered a (something) rust prevention device, a thing that uses some electric charge from the starter battery to put into the car body to prevent rust? Which sounds ... like ... I could kind of imagine how that might work, but ... if it did work, wouldn't public safety announcements about prepping your car for winter include ``see about getting a (something) rust prevention device on your car''? I find, doing research afterwards, that the theory is sound enough that boats use the same scheme; it's not far off those Great Lakes ore boats that had zinc blocks to absorb ions. And there are enthusiastic anecdotes around; the dealer claimed their snow plow has had the device on and in seven years hasn't picked up any rust. But auto safety organizations can't find unambiguous evidence that the work better than washing and waxing your car. (I assume that means the device on top of washing and waxing alone; if the devices alone worked as well as washing then that'd seem like a pretty solid deal.) The consensus among skeptics is that this works on boats because boats are always in the water which cars, even in a heavy rain, are not.

More waiting, as they worked out whether they could transfer my registration and old license plate to the new car; my tags are due to expire at the end of this month. They worked out that they could just transfer them over and it wouldn't cost more than the usual renewal, so, at least this hit me at a convenient-ish time? They're to mail me the license plate renewal tags.

And more waiting. This was quicker than the time I bought the Scion back in 2009, possibly because I didn't have to arrange financing, just fill out a personal check for the down payment (#1100 in our checkbook!) and then the credit union's ReadyCheck. And there was, apart from the warranty interludes, no extra decision-making or work on my part; I could just sit back snagging Diet Cokes from their waiting room fridge and going to the bathroom.

Finally, about 1:00, my original guy walked me out to the parking lot, screwed the plate onto the car and confirmed I had both sets of keys. He shook my hand and, wow. It was mine. And a chorus of sirens began their blaring. It was the county's regularly-scheduled first-Saturday-of-the-month tornado siren test, but it gave the event diegetic ceremony.

Now, of course, I had to get two red cars from Battle Creek back to Lansing. Yes, I considered the obvious, straddling between the two with one leg on each accelerator pedal and one hand on each steering wheel. But there's a long stretch of I-69 construction where the road drops to one lane, so that would be impractical.

Well, let's give you some pictures. If you follow me on Twitter or Mastodon you may have already seen some of these but I think you'll like them anyway. 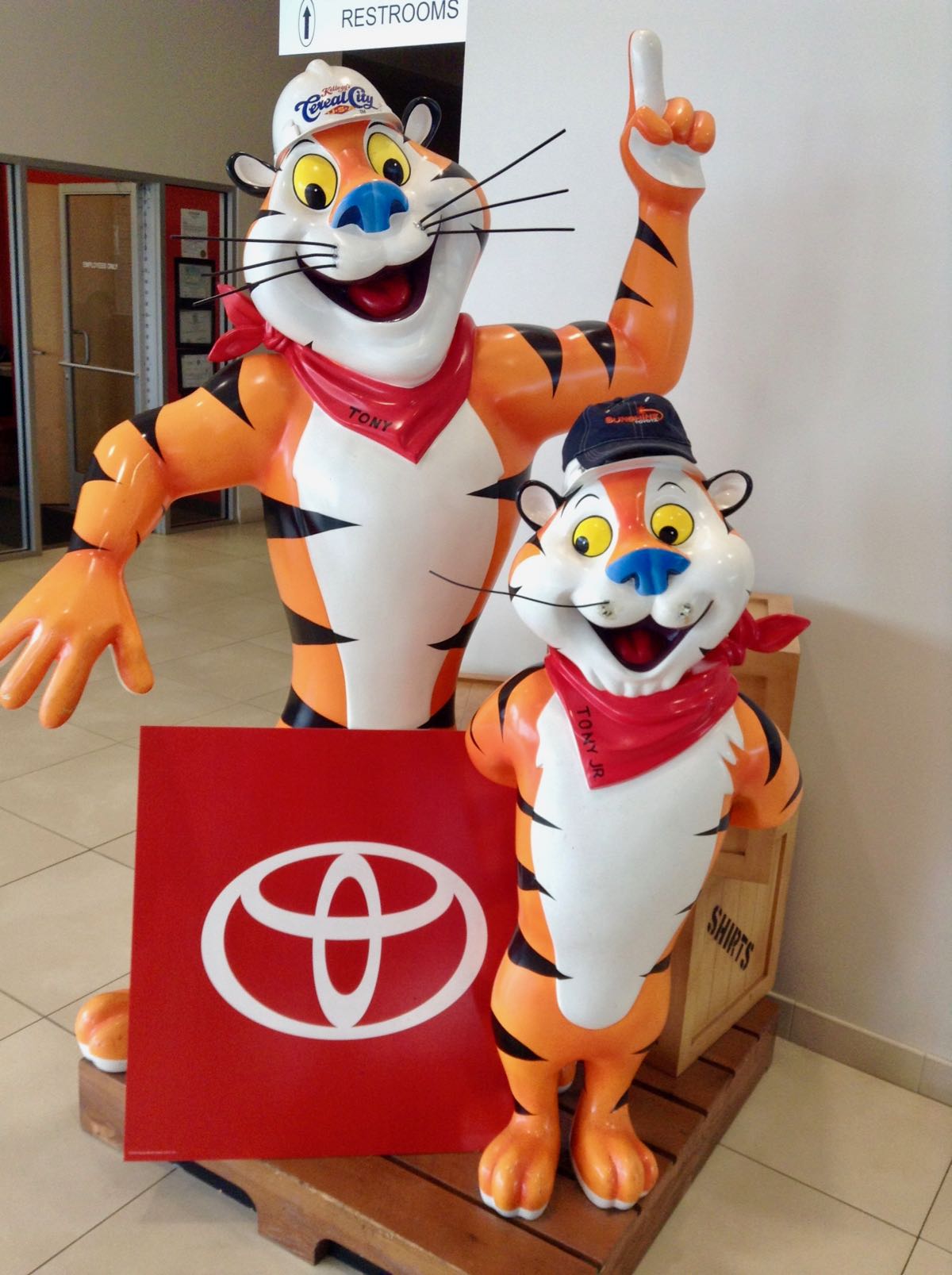 So that's just what happens when you buy a car in Battle Creek, you get to see fiberglass(?) statues of Tony the Tiger and Tony Junior the Tiger Junior. Little fanservice picture here of Tony from behind. I don't know why they're boxes of Toys and Hats.

bunny_hugger surmises these are left over from Kellogg's cereal-tour days. 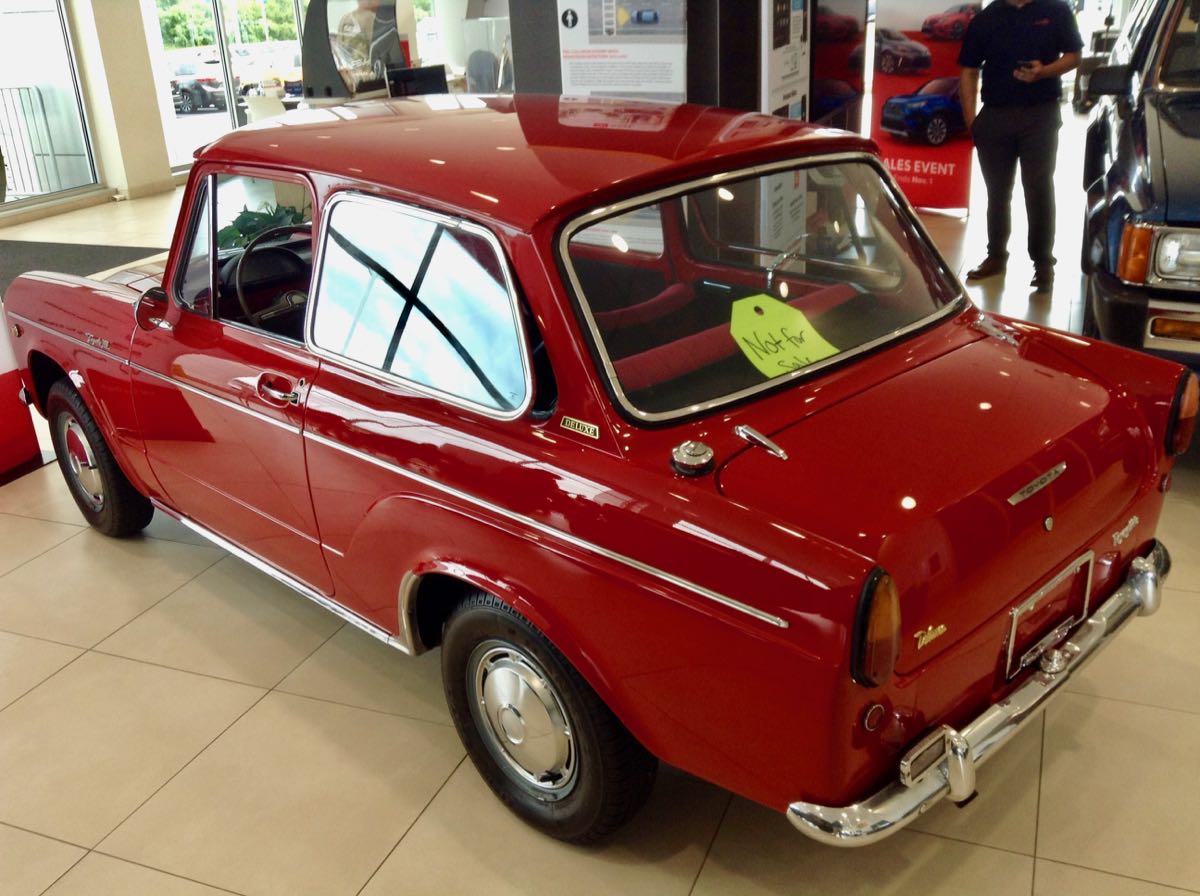 The dealership had a couple vintage cars out for show, including this car from the early 60s that's just so adorable I wanted to hug it. Seriously if you could make a car that looked like this, but that met any contemporary safety standard? I'd buy one. It's a Corona 1900, a name which has aged so unfortunately that it sounds like a sketch comedy group was trying a little too hard to be funny. 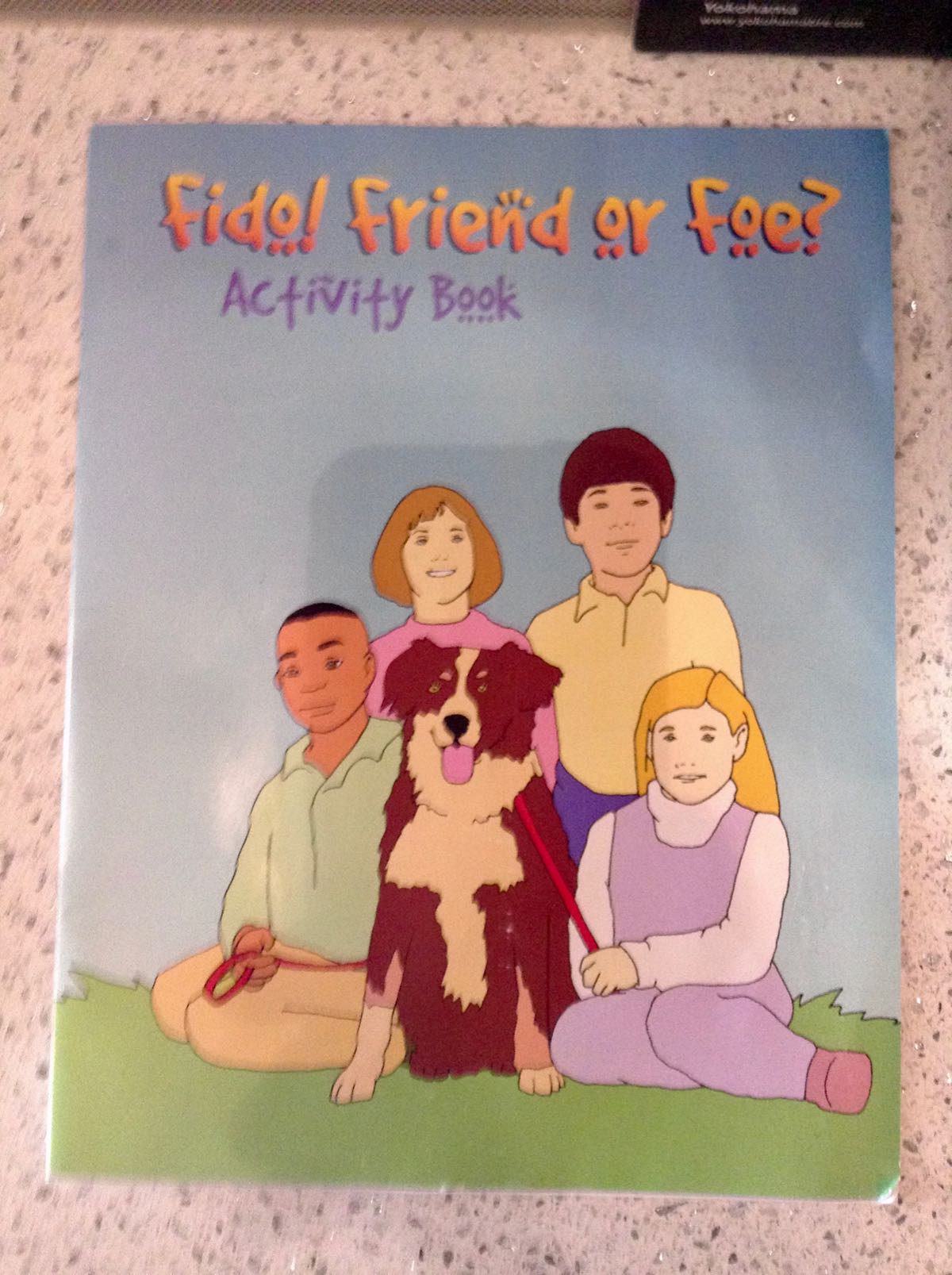 A baffling text left out on one of the counters in the waiting area. I regret not reading it but I kept feeling like, well, someone's sure to come back and talk with me about ... something .. sometime soon, right ... and didn't want to be distracted with something too dumb when they did. I shall regret not reading this all the days of my life. 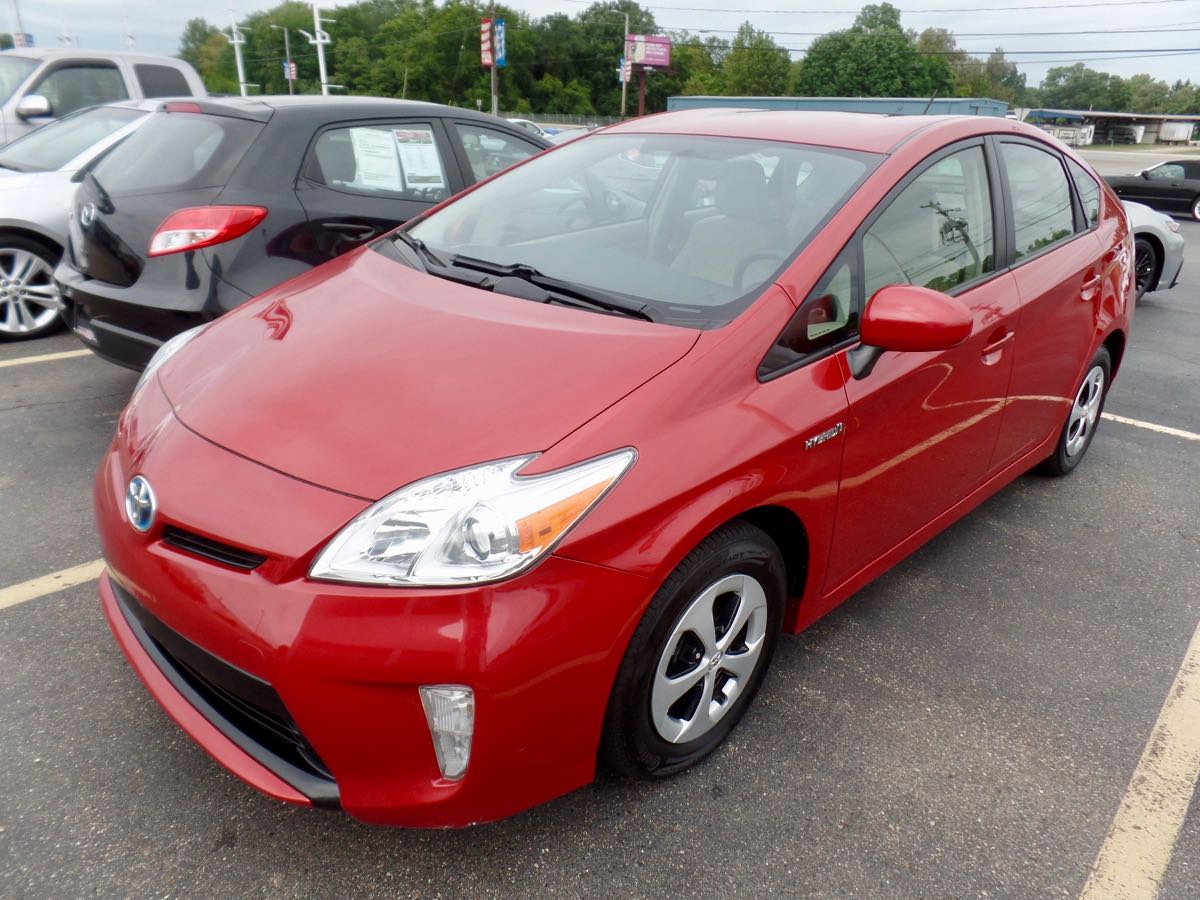 Enough stalling! Here's my new car, all cleaned up and ready to drive home ... somehow ... if I can get it and

bunny_hugger's car home. Remember, by the way, that the dealer was closing just as I finally came into owning this free and clear after 36 months of payments. 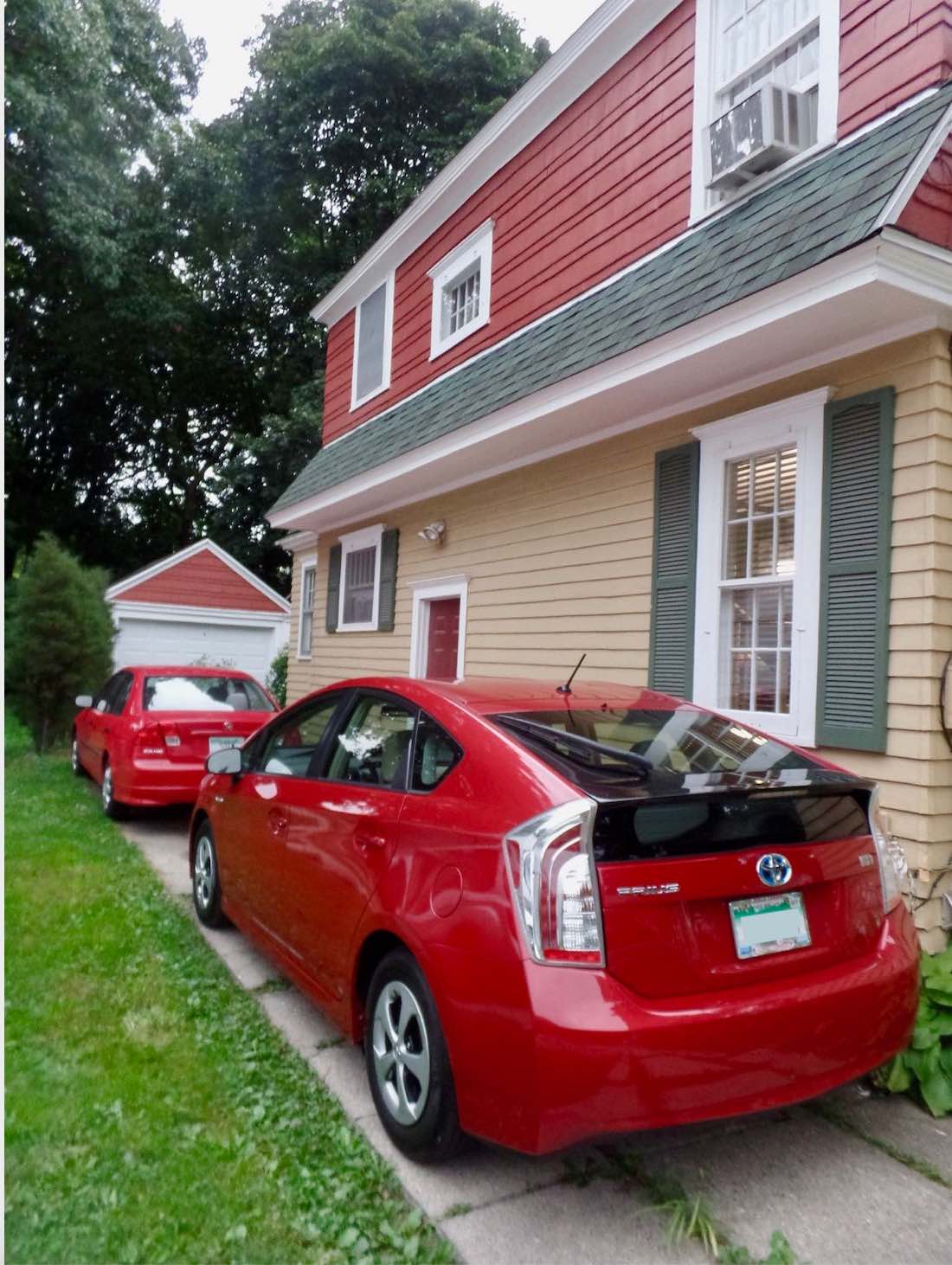 Well, not to spoil things, but we did get it home. And how did this come about? That story I mean to tell you in two days.